10 easy swap outs for a healthier life on the road

Whether your’re fast travelling or slow travelling, there will be a suggestion below to suit you with these 10 easy swap-outs for a healthier life on the road. We have incorporated all of these suggestive swaps into our own lives and not only do our blood tests come back great we feel pretty wonderful too.

We all know that travelling can lead to some pretty unhealthy habits, right!? Whether it’s eating double portions because you’re in ‘holiday mode’, adding deserts every night or having ice-cream and high sugary snacks  because ‘you’re worth it’ (note you’re actually not. Sorry), it’s very easy to slip into bad habits.

Health Isn’t All About Weight

Shock horror news spoiler, your health isn’t all about weight. According to That Sugar Film of people who eat a bad diet, 40% will be overweight, 40% will be underweight and about 20% will look healthy. You really can’t measure health by weight and sadly, you can’t exercise your way out of a bad diet either.

It’s pretty hard to take into consideration brain, heart, bowel and blood health but the suggestions below factor in a range of health benefits that we’ll try to explain.

10 Easy Swap-Outs For A Healthier Life On The Road

This is the easiest swap-out to start with and I was surprised by the results. You see, black tea contains both caffeine and a stimulating substance called theophylline. Both can speed up your heart rate and make you feel more alert but for those of us who are caffeine sensitive it can be a big no-no.

Also compounds in tea called tannins can combine with nonheme iron and make your body less able to absorb iron. Drinking tea with a meal can decrease iron absorption by 50% or more and that may increase the chances of iron deficiency.

Most western breakfasts are loaded with sugar which does not provide us with any nutritional value. In fact, sugar can contribute to anxiety, obesity, diabetes, cancer and a whole range of other illnesses.  People who eat fruit and vegetables as part of their daily diet have a significantly reduced risk of many chronic illnesses and diseases.

So, give your glycemic index some love by eating vegetables for breakfast; a nutritious, well-balanced breakfast can give you loads of energy and prevent you from over-eating during the rest of the day. All vegetables come with a healthy dose of vitamins, minerals and fiber; they add bulk, but not calories, so you’re feeling satiated for longer.  Kara Landau, gut health expert, dietitian and founder of Travelling Dietitian, says “You can expect to feel less hungry between meals due to the extra dietary fibre and water weight”.

3. Swap Phones In The Bedroom For…

The blue light emitted from your phone/tablet is part of the full light spectrum which may be damaging your vision.

A real shift in our attitudes and approaches to life can really make our brains happier and healthier. REALLY!

Robert A Emmons’ research (PhD, University of California) has found that those who adopt an “attitude of gratitude” as a permanent state of mind experience many health benefits, including:

Some other benefits of practicing gratitude:

It appears that recognising all you have to be thankful for – even during the worst times of your life – fosters a whole range of psycho-social benefits. So how can you practise gratitude?

For years I practised restricted houred eating after about 8pm and I didn’t eat until about 1pm the following day however I have recently swapped this practice as I felt my days were becoming too late and I would regularly still be up at 3am.

Now I eat between 7am and 3pm and I am in bed easily for 10pm; I sleep better; function better; look better and feel generally much healthier and happier.

You know you should be getting between seven & nine hours of sleep per night but did you also know that going to bed earlier (rather than later) has health benefits too?

7. Swap The Taxi/TukTuk For Walking

Walking is a brilliant way to keep fit and burn calories but it also has other benefits.

8. Swap Sugar for Erythritol or Xylitol

In order to thrive our cells need glucose and this is where our bodies are amazing because they break down carbohydrates and turn it into glucose. Sugar, as in processed, white, table sugar is a combination of fructose-sucrose and guess what? Yup, our bodies do not need it. Do not need it at all. In fact it’s incredibly detrimental to our health and can even stop our immune systems from working.

9. Swap The City For Nature

City breaks are fine for a change but research repeatedly shows that spending time in nature is fantastic for our bodies.

10. Swap Dinner Plates For Side Plates

Whether you want to lose a few pounds or maintain a healthy weight, eating the correct sized portions are as important as eating the right foods. Over the last thirty years our dinner plates have increased in size by a whopping 10-15cm and according to the National Institute of Health, food portions in America’s restaurants have tripled.

Controlling your portions doesn’t mean you need to eat tiny amounts or measure out precisely the number of peas on your plate. You may just need to retrain your brain to see a smaller-than-normal portion as satisfying enough. A simple way of doing this is reducing the size of your dinner plate.

What are the benefits of portion control?

We love it when you share our work, so if you liked this article on a healthier life on the road, please consider adding this to your Pinterest board. 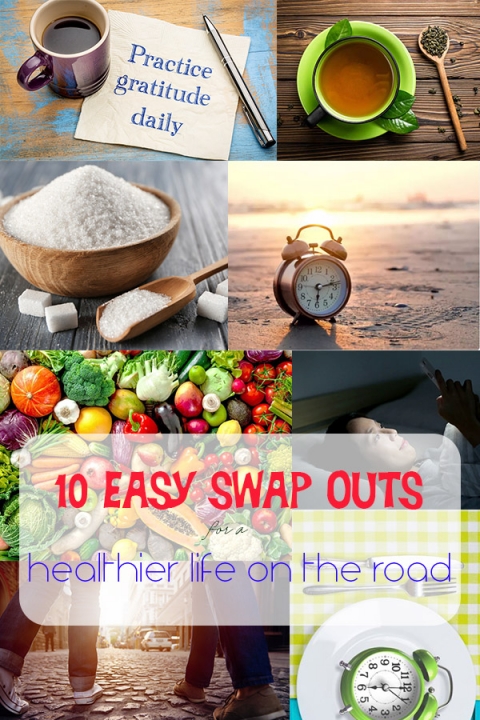 Spread the love
Posted in Africa, America, Australia, Central America, SE Asia, The Middle East
« Photo Story: Walking 500 Miles To The Jacobite Steam Train
Everything You Need To Know About Renting A Car & Driving In Sudan »