Arkawit Gate; The Surreal Ex-British Colony In The Middle Of The Desert

My guidebook (which was about a decade out of date) listed Arkawit Gate as Erkowitz, although Google Maps marks it as Arkawit & other guides refer to it as Arkaweet. Regardless of its name-spelling, it’s a historical place located in the mountains near Port Sudan and its welcoming marker is an enormous gate which straddles the road, literally in the middle of nowhere. It’s a very unique piece for a unique part of Sudan.

What Is So Special About Arkawit?

Blink and you’d miss the turning for the road. The road is nothing spectacular and I don’t even remember if it was signposted. It seems to travel for ages through a pale, meandering, dusty but rocky, desert and this was the only place in Sudan where we saw cacti growing by the roadside.

1,200 meters above the Red Sea, it is the highest place in the area and of course, this is reflected in its weather system which contrasts the typical equatorial heat of Sudan.  It is almost the only place where clouds hug the buildings and the rain flows regularly. In fact, you might almost describe it as chilly up there.

Arkawit Gate Sits At The Entrance To The Mountains

We had to pay a small fee to a local man who said he kept the gate in a good condition. I think this is nonsense but we paid it all the same to keep the peace.

Arkawit Gate straddles three roads that each seem to lead to the same road. I’m sure there’s some significance to that but it’s incredibly hard to find any written information about Arkawit.

The Mountains Of Arkawit Have A Colonial History

England invaded and colonised Sudan between the 1890s and 1953 thus Arkawit must have been built somewhere within this period.

The architectural style of Arkawit is surreal to say the least. With an eclectic mix of abandoned stone houses with their high ceilings, chimneys & wide wooden verandas they rub shoulders with a modern hotel, newly built wooden shacks belonging to a local tribe and even a tennis court (with marble seating) looking out over the rolling green valleys below.

During the occupation period, Arkawit was a place of vacation for elite English to spend their holidays. There’s a lot of evidence of this area once had been extremely wealthy. There’s a grandeur to the marble steps and the art-deco homes which take prime position on the mountainsides overlooking the rocky outcrops beneath them.

Between 1939-45 Arkawit was home to an Anglo-Sudanese study session the ‘Erkowitz Study Camp’ which promoted cross-cultural learning and discussion with academics in Khartoum.

It Reminded Me Of South Africa

The area reminded me of South Africa and that is probably because of the shape and build of the colonial buildings, in amongst the rolling African hills. The shape of many of these buildings, including their semi-circular off builds, with their high roofs and grand but shaded verandas, reminded me of British builds in the south of Africa.

What do you think? Can you see the similarity? Most of the buildings looked derelict and abandoned however the local tribes had not moved into them, instead favouring to build their own houses through local techniques and designs close by.

This Building Is Thought To Be Presidential

It’s really difficult to get hold of information about Arkawit and whilst our guide told us this enormous building may have been a monastery or church, somebody else told me it was a presidential building that had housed government officials and their guests.

It holds pride of place as the highest building in the town, overlooking the valley below. Its crescent-shaped demeanour suggests it was owned by someone seeking power with a flair for nice architecture and grand expectations.

It doesn’t seem to be in too bad condition and the relatively modern airconditioning units which stand out the back made me think it might have still been in use. Although this is apparently not the case?   We couldn’t gain access at it was all locked up although photos on Flickr suggest it might have been open previously.

What Is There To Do There?

Most people come to see the gate and then leave, however despite its slightly bedraggled appearance, hiking & mountain biking are common here with treks out to the acacia-spotted ridges of Jebel Danaieb. I am told that there are often sightings of Sudan’s native monkeys.

One of the most famous mountains of Arkawit is Mount Six, where there’s a small market called Harsab. Here you’ll see orchards, gardens and due to the rich soil and low cloud, many trees are able to grow making the landscape a vivid green colour.

Can You Stay In The Area?

You can stay here, at the resort of Jabel Alsit. Finding accommodation and negotiating prices can be a drain for travellers, it’s much easier to have somebody who speaks Arabic to assist you. You cannot book any accommodation yet through booking engines as America insists on placing economic sanctions on Sudan. Make sure to book in advance.

Book Accommodation Prior To Arrival

Great news. Now that the financial restrictions have been lifted on Sudan, they can make use of booking sites. Now you can book your accommodation prior to arrival which makes it so much easier.

You can add this post on Arkawit Gate to Pinterest using this image. Don’t use Pinterest? Check out some of our boards to see what the fuss is all about. 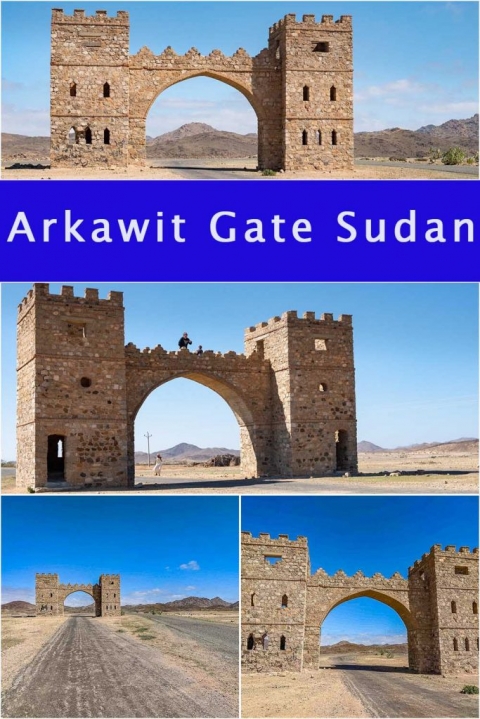 Check out our other posts on Sudan and backpacking this amazing country with kids.

Spread the love
Posted in Sudan
« Greek Party Islands: Best Party Destinations In Greece
10 Unknown European Places To Visit When Lockdown Is Over »