In the summer of 2017, the kids and I embarked on South-East Asia. With two backpacks we dipped our toes into seven new countries in eleven weeks. Phew, what an adventure! Here’s the best way to see Penang, in our opinion. 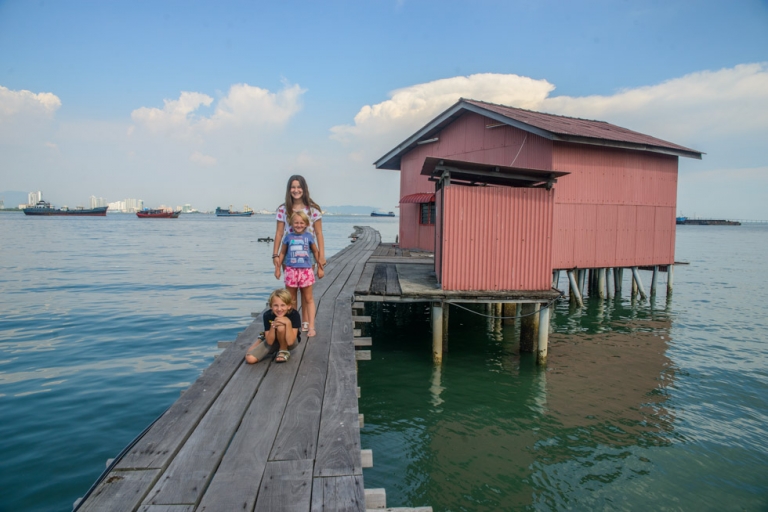 The best way to see Penang? Hire a local

The Best Way to See Penang

Penang; an island in Malaysia’s northeast was our second destination after Saigon and our first impressions were that it was very quiet and organised.

Penang reminded me of Western Australia; big, flat, colonial architecture with roads designed for motorists but definitely not good for pedestrians.

I foolishly didn’t rent a car. BIG MISTAKE because driving in Penang is super simple, relatively quiet and the roads are in great condition. In fact, I would say that driving on Penang was on a par with driving in Australia.

I wanted to see Penang’s highlights but on foot that would take an eternity and by taxi would be too expensive. Tuk tuk would be painful, so how could we see Penang?

DEFFREY and his air-conditioned people carrier!

One way to get innovative and try to access local guides is by using phone apps. They have the potential to offer more personalised and local experiences and this means investment goes directly into local communities and not foreign-owned tour agencies.

I discovered a phone app called WithLocals and used it to search for a tour of Penang. We found Deffrey; a student with a passion for his home ground and what a delight his tour was!

Deffrey collected us in a seven seater, air-conditioned people carrier which was comfy and oh so pleasant after the humidity of Penang.  He had an entire day’s worth of activities planned for us to see and do and what better way to tour the island than with somebody who has grown up there. 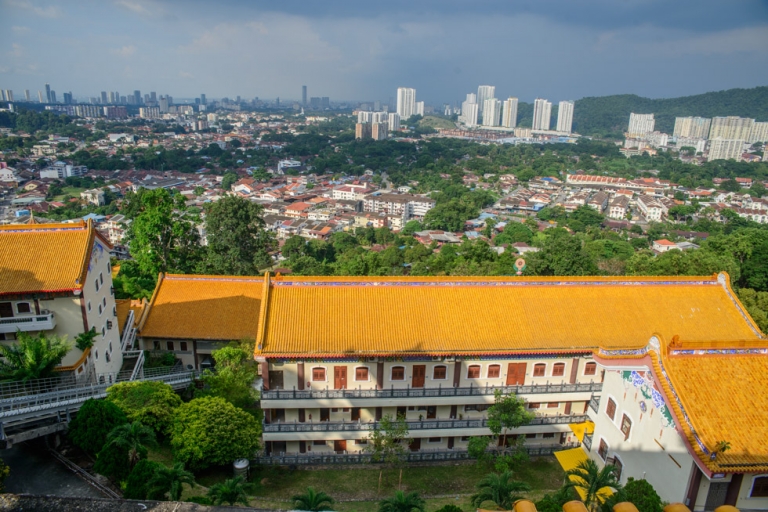 Penang from the giant Buddha

To understand why we visited a Chinese museum in Malaysia, you first need to understand a little about Malay history. I will try to be brief! 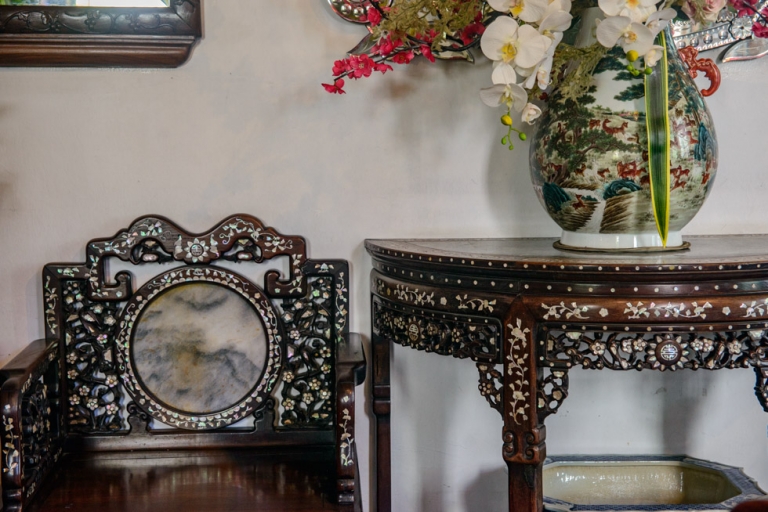 The Portuguese were the first European colonialists to conquer in 1511, followed by the Dutch in 1641 and then the British who ruled until the Anglo-Dutch treaty of 1824.

In order to meet the needs of the European colonial economy; elite, English educated, Chinese traders (often from Singapore) immigrated to Penang. With the ability to converse in multiple languages, these business men became the middleman between the British, Chinese and Malays.

The successful and wealthy Chinese traders (referred to as Baba) met and married local women (Nyonya) and their offspring (straits born Chinese) are referred to as the BabaNyonya people.

The museum which is typical of an old shop-house, is set out on multiple floors showing the traditions and customs of these much respected people. 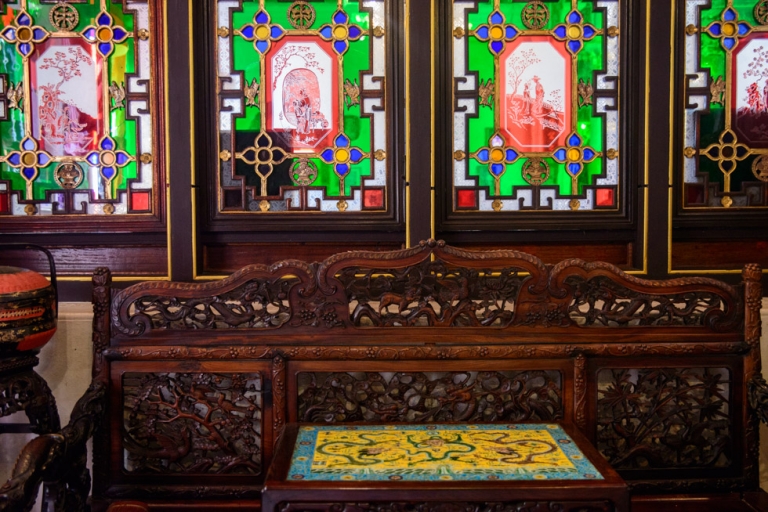 What is there to see?

On the ground floor there are beautiful tiles, statues, family photographs and fine examples of Chinese furniture and porcelain.

Upstairs, a bedroom is kept in traditional four poster style and downstairs a carved wooden temple. Both exquisite and definitely worth a visit. 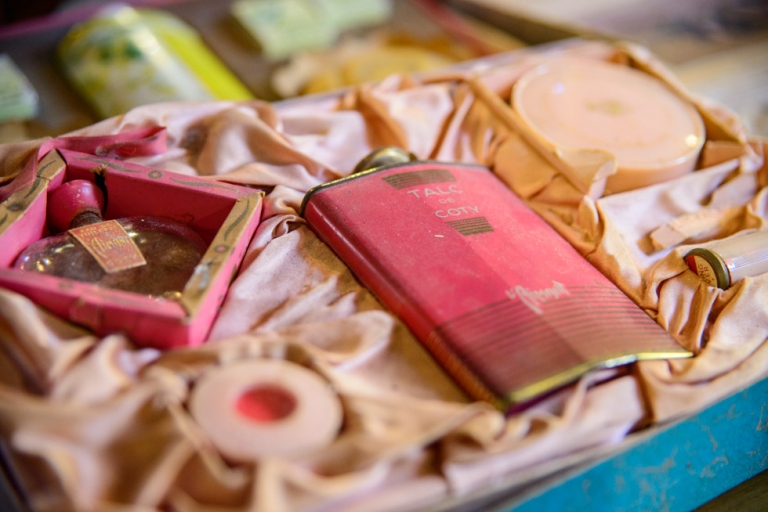 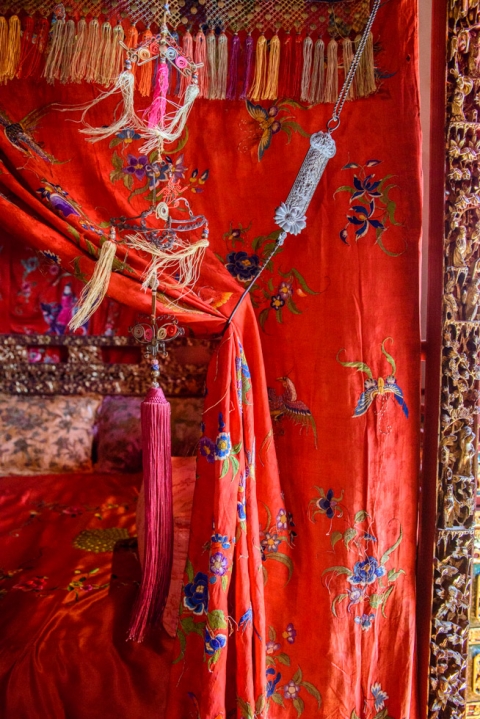 Heading downtown to the coast we visited a clan jetty, fishing village where the houses are on stilts. Although this is quite common in various parts of South East Asia, it isn’t so common near big and newly developed cities such as Penang.

Penang is a heritage town, rich with historical sites and cultural events and these clusters of wooden houses were built by the Chinese poor immigrants during the nineteen century. The houses were built on an ad hoc basis and close to each other, with some separated by a small alley to allow sea breeze to pass through for the cooling effect.

We took a walk into the centre of the bay on a long wooden jetty which moved and creaked with every passing step. 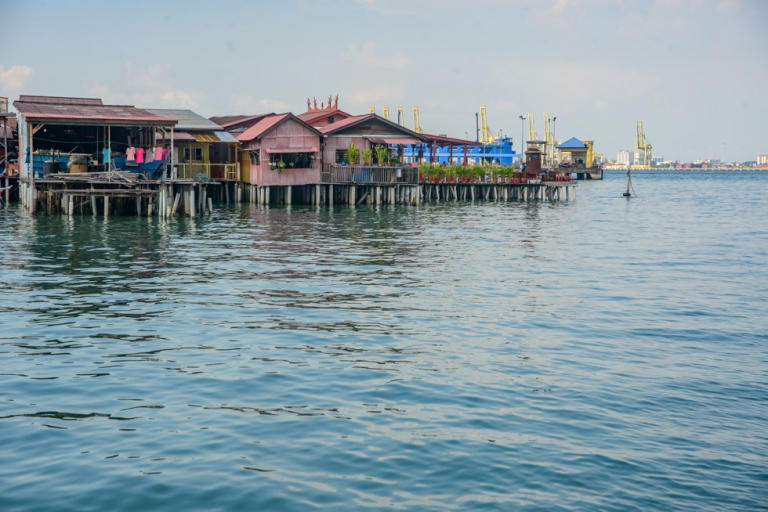 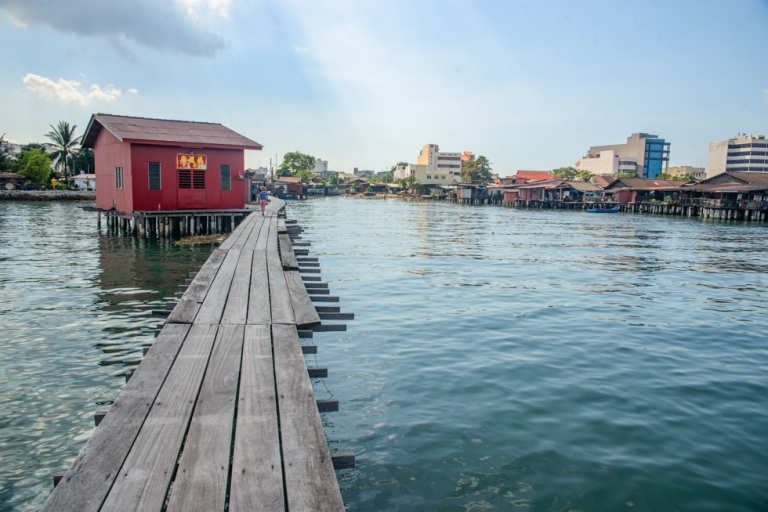 Penang has become famous for its street art and there’s loads of it to see too.  It started back in 2012 when Lithuanian artist Ernest Zacharevic began wall paintings of children across historical Georgetown. Other artists have since added their own variations and the town is full of wall art. There’s even an official map of where to find the art.

If you’ve been already, what was your favourite? Did you find the trishaw paddler?

If you haven’t been, I’d recommend going. Many of the roads around the centre are pedestrianised which makes it easy to stop and pose for photos. 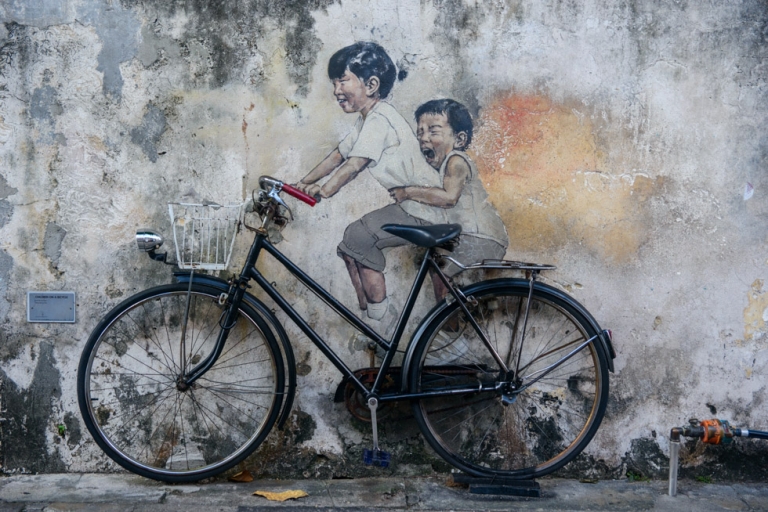 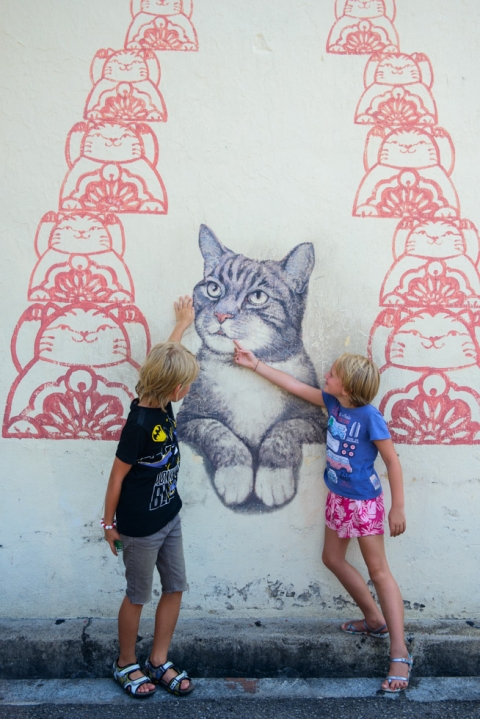 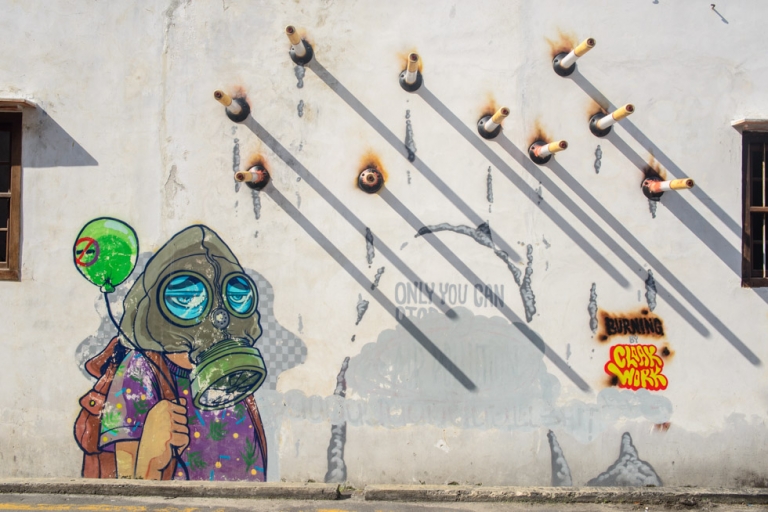 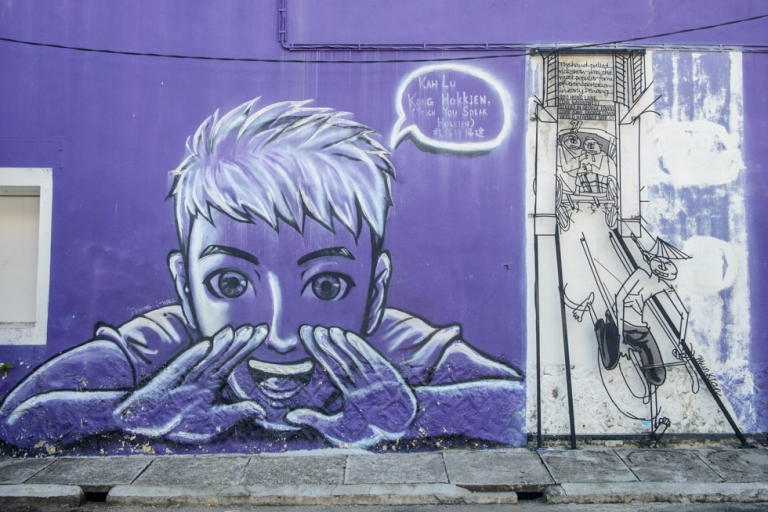 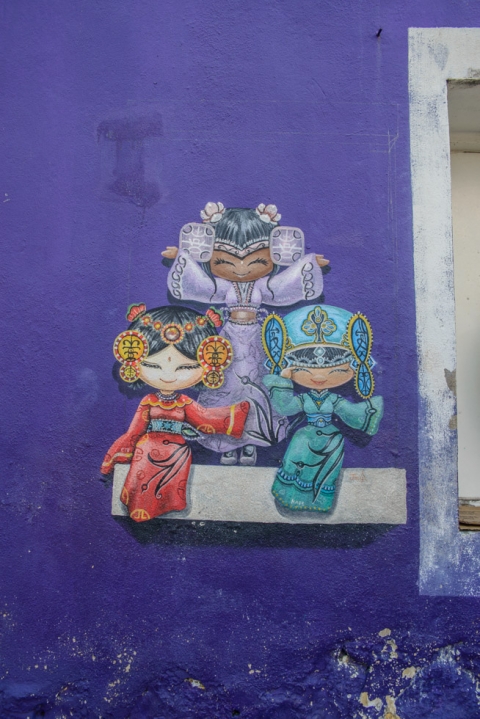 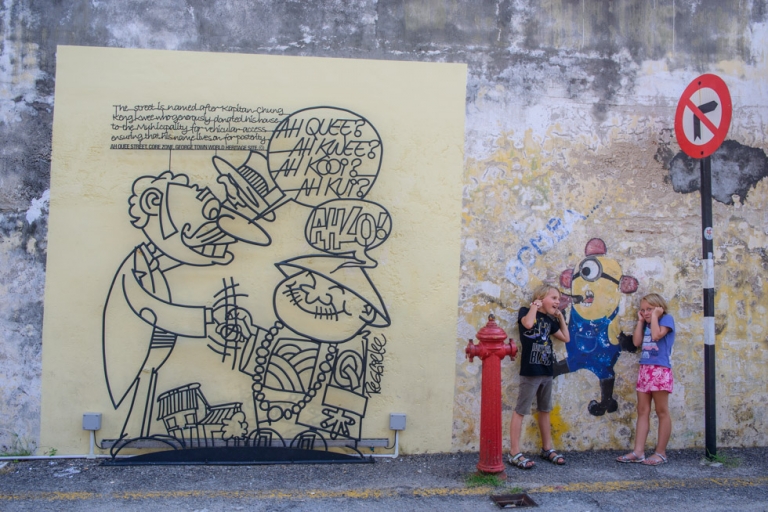 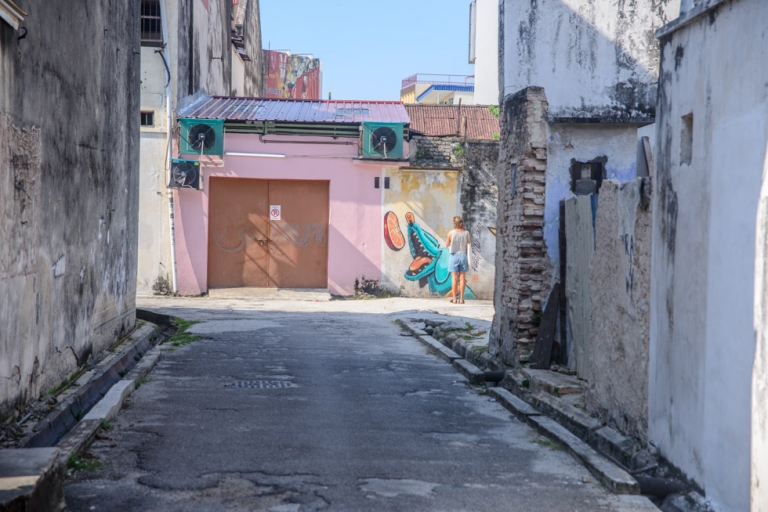 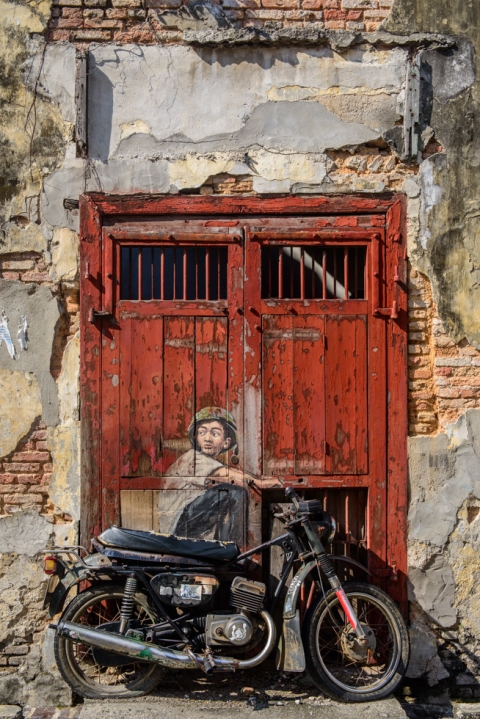 On the streets of Georgetown we met a man… 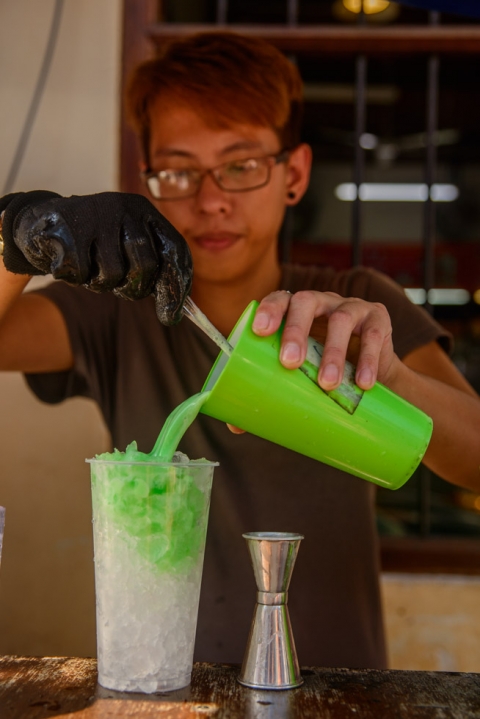 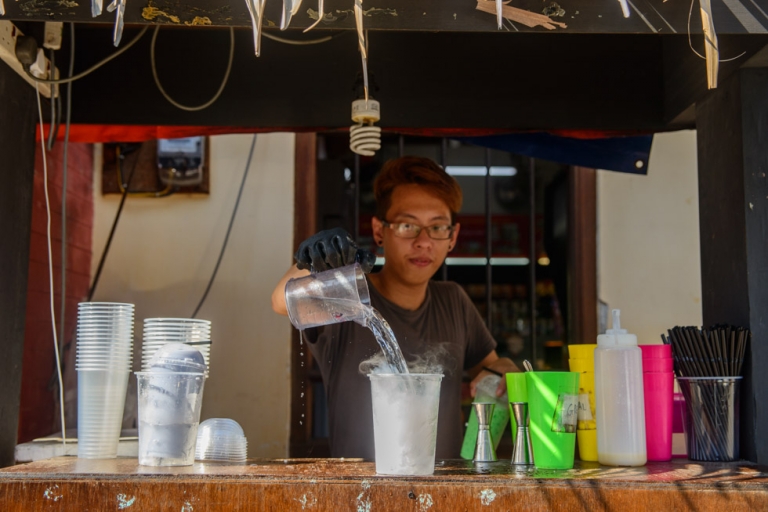 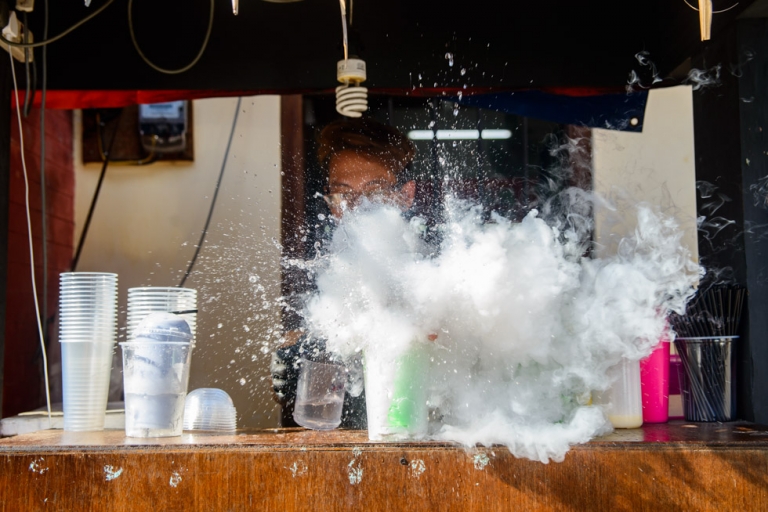 The fourth stop and very importantly

After the ease of Vietnam, being vegan in Malaysia was HARD! It required a lot of planning because meat was mixed into every dish but Deffrey went out of his way to take us to an actual vegan restaurant. Wow!

We visited a canteen style, self-serve restaurant which was amazing. I’d never seen anything like that before and we’re really very grateful to Deffrey for accommodating us ‘fussy eaters‘.

The Buddha on the hill is the largest and most important Chinese Buddhist temple in Malaysia. It was built in 1891 and is described as being one of the largest in South East Asia.

Even for a staunch atheist its architectural prowess was impressive to see BUT did you know that in Malaysia you must have your religion documented on your birth certificate?

Being atheist in Malaysia is not recommended as your religion will be recorded as ‘communist’ on your birth certificate!! Nobody wants to be labelled a communist so most parents choose a religion for their children even if they’re non-practising. 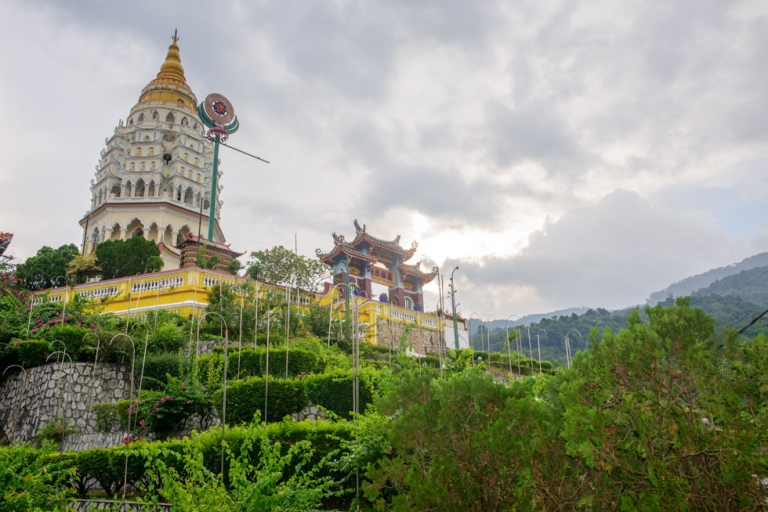 The temple sits on multiple levels on the hill with the huge Buddha at the crest.

Visiting during the rainy season was a gamble that paid of. You do have to be prepared for the occasional outburst and a few puddles but generally it isn’t as humid as during the summer months.

Imogen, our youngest, had an unfortunate accident when the kids were running and playing tag. She slipped in a large puddle and landed bottom first in slimy mud. Thankfully the toilets are in good working order and we were able to strip her off, wash her clothes, re-dress her and she was dry less than an hour later. Did I mention the humidity? 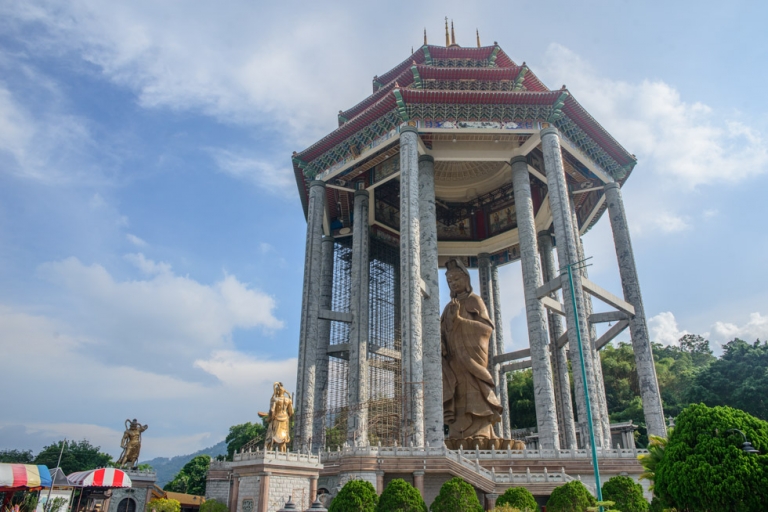 The buddha on the hill

There’s also a large pond filled with enormous koi and some plastic ducks. The pergolas are beautifully coloured and there are twelve animals to spot. 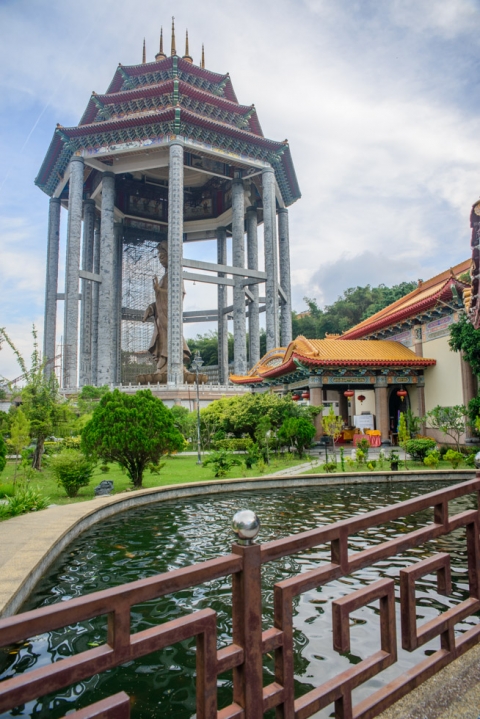 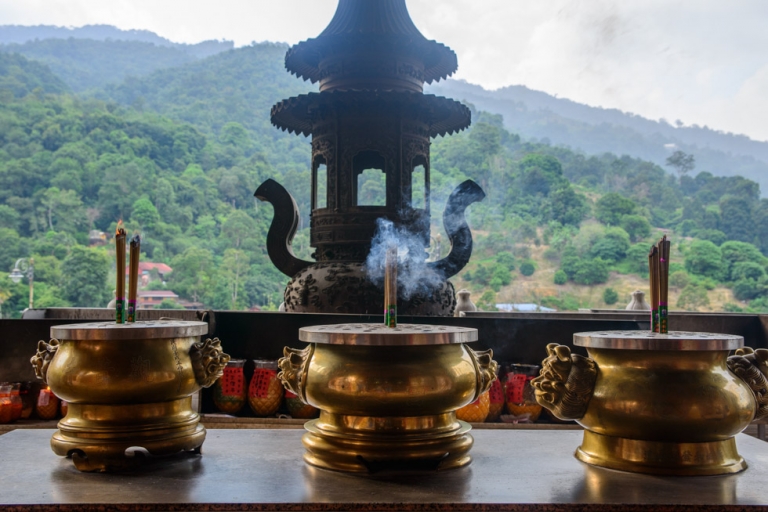 Our next stop with Deffrey was the Air Itam Dam which was built in 1914 although wasn’t opened to the public until 1962. I’d read that it was an oasis of peace and nature but it was heaving with joggers and hikers. Apparently if you visit during the week it’s exceedingly quiet but it comes alive on the weekend with families visiting, picnicking, kids cycling and joggers jogging.

The dam is found on a slight elevation and it gives good views over Penang. We’d love to go back and walk around it, so that’s one for next time! Apparently there are monkeys and turtles to spot. 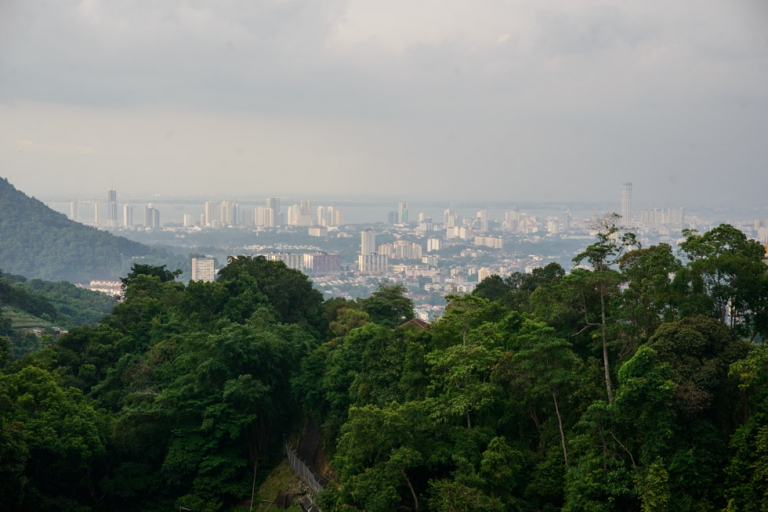 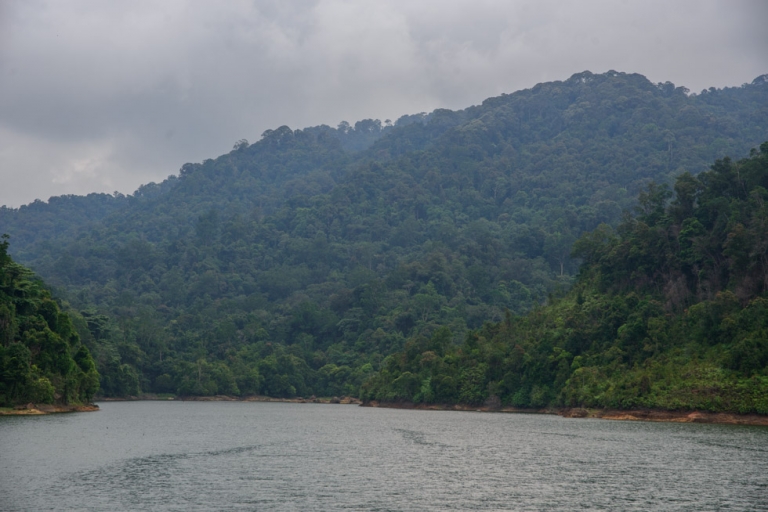 Our final destination with Deffrey was Penang Hill. It’s a very popular spot now and there’s a reason why: SUNSET!

From this elevated position the sunset over the hills, city and ocean is impressive. Really, you could spend an entire day up in the rain forest climate walking around the colonial buildings.

We were even treated to a rainbow in the sunset. A great way to finish off an awesome day! 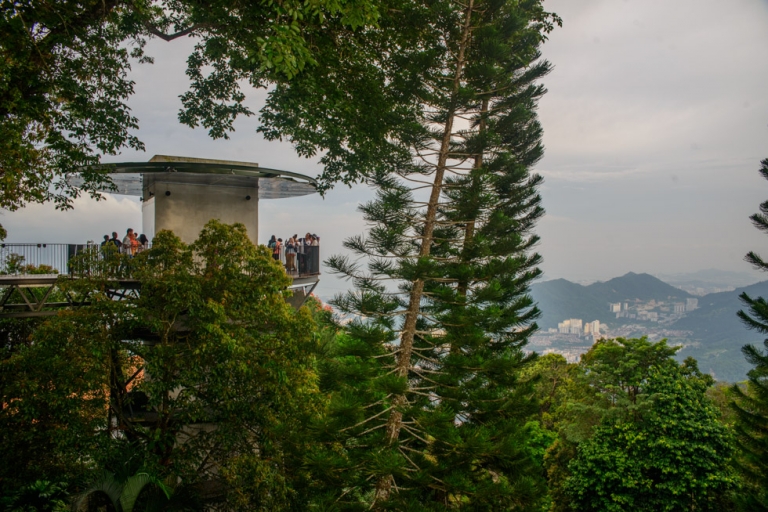 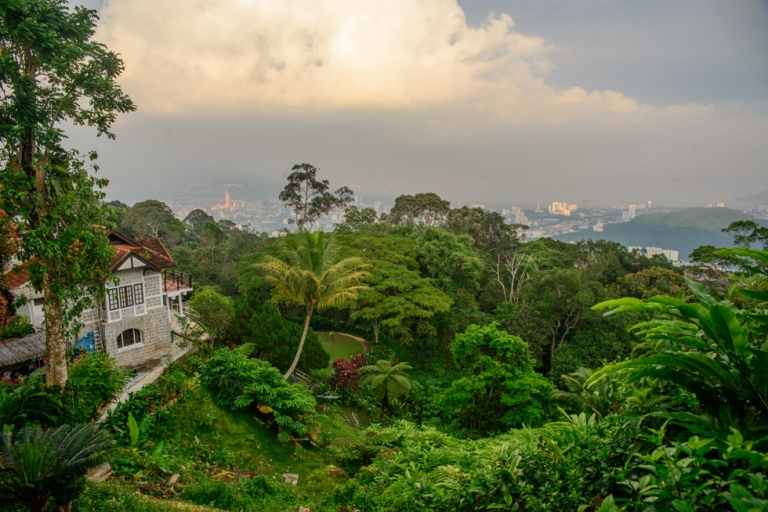 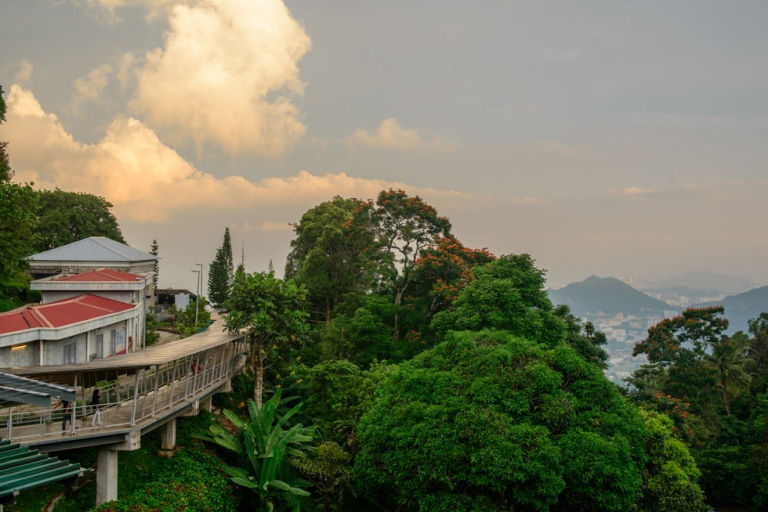 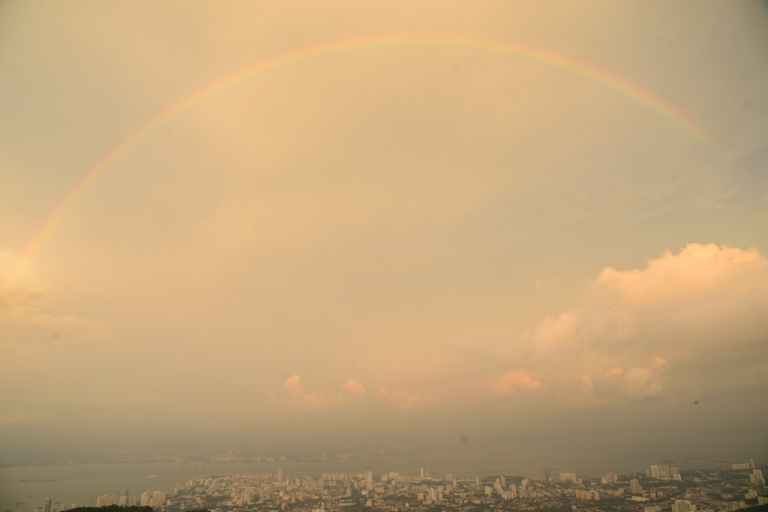 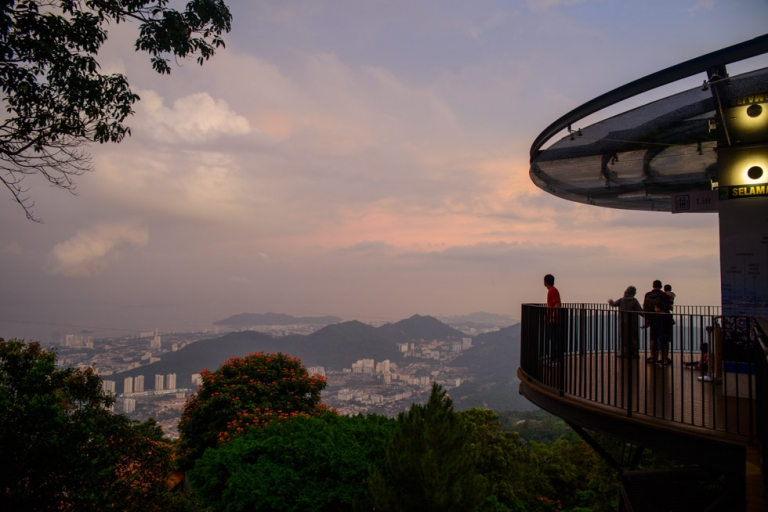 We had a fun-filled day packed with Penang’s popular sites and led by a great guide.

If you’d like to book Deffrey head over to his official page and click REQUEST TO BOOK.

Want to chat travel with us, have questions you’d like us to answer? Head over to Facebook or Instagram and we’ll respond as soon as we can.

What else can you do in south-eat Asia?

See How easy it is to Pin this!

Spread the love
5
Shares
5
Shares
Posted in Malaysia
« Pobiti Kamani: Bulgaria’s Answer to The Pinnacles
Heading to Dubai, UAE? Read this before you go! »