Some say it is Angkor’s best temple and with its Indiana Jones style passageways & jungle atmosphere and with a wild temple reclaimed by nature (and without the crowds of Angkor Wat), it isn’t hard to see why Beng Melea is so amazing.

Beng Melea; Where Have I Heard That Name Before?

Beng Melea (which means Lotus Pond in Khmer) is famous for being featured in the 2001 box office film Lara Croft: Tomb Raider with Angelina Jolie. I haven’t actually watched the film but I’d seen plenty of photos of this thousand-year old, abandoned temple and even though it’s 60km from Siem Reap I was definitely not going to miss out on it. I hope you feel the same way because it is a spectacle to explore, especially with kids.

Where To Find Beng Melea

In relation to Siem Reap, Beng Melea sits east and is about an 80 minute drive away from Siem Reap. From memory a driver with a car for the day cost us $50 and we booked him through our hotel.  Driving in Cambodia looked pretty easy and if we went back (which I hope we will do) I wouldn’t hesitate to drive.

Beng Mealea is not included in the Angkor Temple ticket – it costs an extra $5 USD which is payable at the ticket office and entrance gate about a kilometer away from the temple. Your driver should know where to stop but it is also signposted if you’re doing it yourself.

I did not pay for two of my kids as they were under the age of 12.

Nature Has Taken Its Course

In the years since Beng Melea was abandoned, nature has definitely taken its course and the whole site has been overrun by greenery. Trees grow around the fallen stones, vines are wrapped around gateways and roots have crumbled walls.

Combined with parts of the temple which have collapsed from centuries of neglect, the ambience creates a sense of dramatics around the rustic ruins. Exploring the site is an adventure in itself and to access the best parts, you’ll need to scramble over piles of stones and sidestep wide plants. If you get a guide from the front of the temple, he will show you the best areas to go ‘off track’.

The history of the temple is largely unknown and has only been dated from its architectural style, which seems to be almost identical to Angkor Wat. It is presumed to have been built during the reign of King Suryavarman II in the early 12th century and some even think that Beng Melea could have been a prototype for the great temple itself.

Beng Melea is smaller in size than Angkor Wat, the king’s main monument, however it still ranks among the Khmer empire’s larger temples. The gallery which forms the outer enclosure of the temple is 181 metres wide and was once surrounded by a moat which was estimated to be 45 metres wide.

Unlike many other temples which were restored by French occupation in the 1800’s, Beng Melea is largely unrestored, and the majority of its towers and courtyards can be seen lying in great heaps of sandstone piles covered with succulent moss.

This Is The Real Deal

As far as I was concerned, Beng Melea was much more real than Angkor Wat. The temple is oriented to the east, but there appear to be entrances on all four sides. There are three enclosing galleries which once surrounded a sanctuary in the middle. This has long since collapsed, but the ruins add to the charm of this once-great temple as you imagine how grand it might have been. Unlike Angkor Wat, much of Beng Melea is left to your imagination and we thought that was amazing.

A Map Of Beng Melea

The temple can be a little confusing to explore due to its dilapidated state.  You will see a raised, wooden walkway, which mostly traverses areas around the outer moat, but this route misses much of what makes Beng Melea special as the most impressive spots are hidden in the jungle.

There are three galleries which enclose a central sanctuary. Structures referred to as libraries are found on the right and left of the main causeway.

It is built of sandstone, although the carvings are simple and limited to certain areas. These may be lintels, platforms or cornices decorated with a single frieze – much more understated than Angkor, and many of these ornate features are found strewn across the floor. How exciting to literally stumble upon them while clambering them.

The map below is based on a drawing by Léon de Beylié, one of the early Western visitors of the Angkorian temples in the early 20th century. The red line shows the current wooden walkway.

The temple was likely the center of a large town. The approach to the temple has paved walkways which lead towards the temple. Located to the east of Beng Melea was a baray, a large water reservoir, which has since dried out (although Cambodian officials did discuss refilling it). On the west border is a laterite embarkation terrace where a wood pavilion once stood with four courtyards.  A walkway lined with boundary stones leads to the moat and the east entrance of the temple.

A 45 meter wide moat encloses an area about 1 kilometer long and nearly 900 meters wide. The outer enclosure probably consisted of an earthen wall and a wooden palisade. All that remains today is a cruciform terrace at the centre of all four sides. From each of the terraces a walkway with multi headed Naga snakes leads to the temple. At the west terrace near the moat is a Dharmasala or “house of fire”, a structure built to shelter travelling pilgrims.

The first enclosure contains the central sanctuary. The large sanctuary which must have been very imposing has completely collapsed leaving a huge pile of stones. To the east of the central sanctuary is a long room flanked by two library buildings. Lintels and pediments as well as the base of columns are adorned with mostly Hindu depictions, such as the churning of the ocean of milk, the God Indra riding the three-headed elephant Airavata, Shiva, Vishnu on his mount Garuda, the birth of Brahma, Krishna supporting Mount Govardhana, as well as battle scenes. On the walls are several sculpted devatas, Hindu deities.

The central sanctuary is surrounded by three enclosures with galleries. The enclosing walls are intersected at the centre by a gopura entrance building. The third enclosure measures 181 meters long and 152 meters wide. Behind the east gopura are large cruciform terraces connecting the second enclosure, flanked by library buildings with colonettes in the windows. Near the north library building is a large broken stone container resembling a sarcophagus. Past the south gopura are two large halls. The one to the right has four small courtyards surrounded by galleries.

Why Visit Beng Melea With Kids?

Beng Melea is special because it’s one of only the Angkor temples that’s been left to be reclaimed by nature. Despite lying in ruins, scattered across the floor, its sheer size is impressive and with crumbling stone blocks acting as stairs to the temple’s many long, dark, subterranean, rubble filled corridors and chambers, it is also the most fun temple to explore.

Not that long ago Beng Melea was part of the Khmer Rouge stronghold for many years and was just too dangerous to visit. It is also said that this temple was the place where King Suryavarman II and his fortune were buried however nobody actually knows where he was buried and it all remains a big mystery yet to be solved…. or alternatively you can just swing on the vines and jump around the stones!


Three Other Off The Beaten Track Temples You Could Visit

You could easily spend a few hours exploring the temple so visiting Beng Melea makes for an excellent half day trip. Alternatively you could also visit these lesser known temples at the same time.

Why Should You Visit Cambodia? 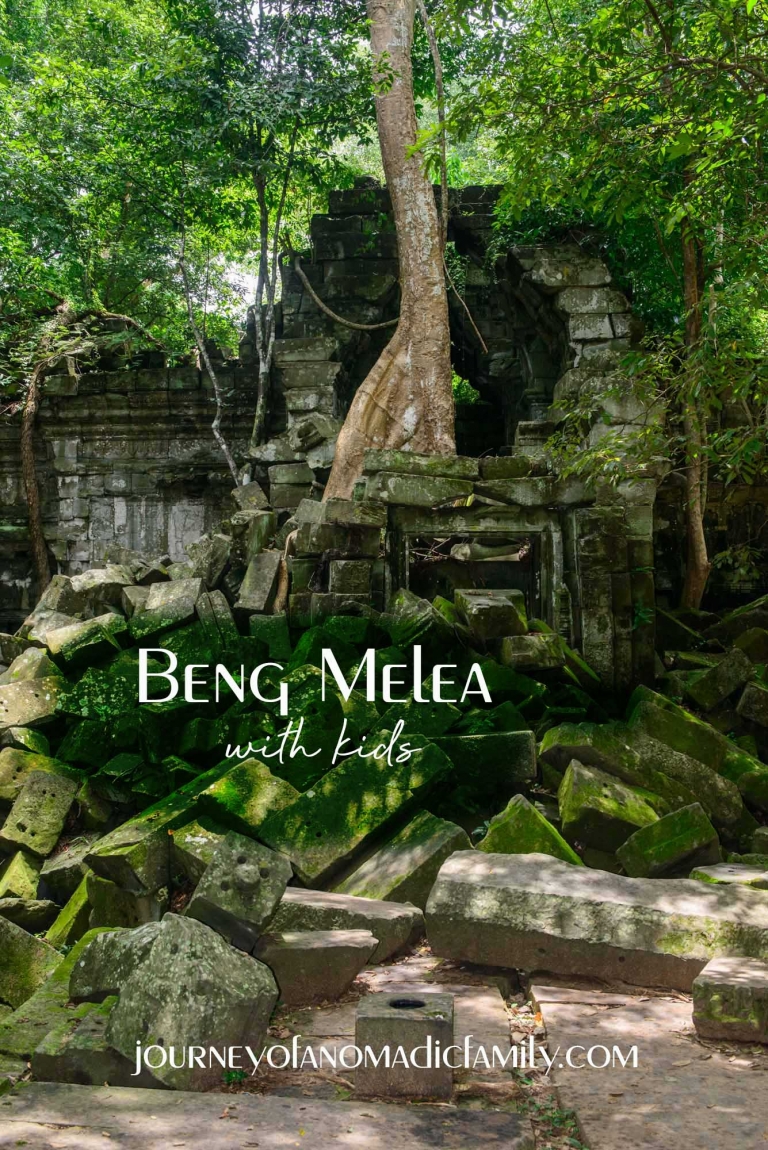