Taking Kids To The Grey Seals At Horsey Gap In Norfolk

The grey seal colonies of Horsey Gap on the Norfolk Coast are reportedly very healthy in numbers and growing each year. Great news! So we popped along for a little visit. Here’s how you can visit and what you should expect if you’re taking the kids. 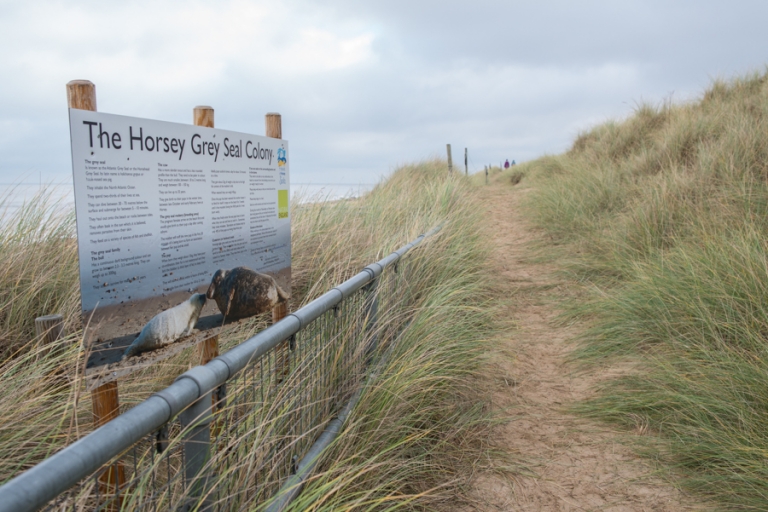 How To Get To Horsey Gap Beach

Less than an hour from Norwich, Horsey Gap is an area of Outstanding Natural Beauty and is known for its scenery and wildlife. The gap acts as a sluice and flood gate as the beach is long and flat and prone to flooding. Nearby is Horsey Mill which acts as a drainage mill, pumping the floodwater off the land.

Swimming is not advisable and there are notices warning of strong currents. Although we regularly swim in the sea, I wouldn’t recommend anything more than paddling here.

You Must Pay For Parking

Car Park 1 is about a mile from the seal pups and it’s as close as you can get the car to the beach. Parking is £1 per hour and the company does fine non-payers!

Car Park 2 is about two miles from the seal pups and it gives access to the lane leading to car park 1.  This parking is free.

Alternatively, you could park at the Nelson Head Pub and walk down The St to gain beach access. 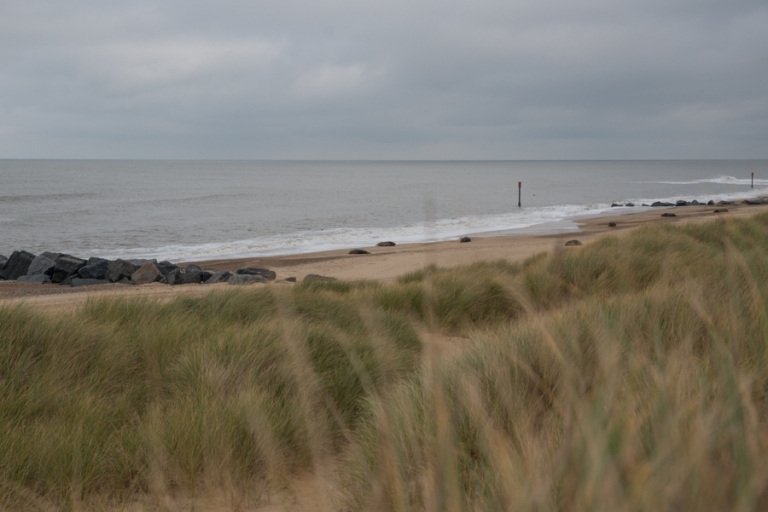 The beach at Horsey Gap

When To Visit The Grey Seal Horsey Gap

Between November and February, the grey seals will frequent the beach to give birth and breed again in time for next winter. During this time the beach is closed to visitors however there are designated walkways and viewing points where you can observe the seals.  The viewing points are a fair way from the beach – to stop disruption to the animals – so best to take a pair of binoculars and if you have one, a long lens!

Pups and Mums (cows) may still be there after February and the beach then re-opens and gives closer access.  Please remember to respect the animals and don’t touch them though. I know they’re cute but they shouldn’t become too accustomed to human contact.

We visited at the beginning of November and the beach was quite empty of seals and only 8 pups had been born. I am informed by a warden that the best time to visit is at the end of December. 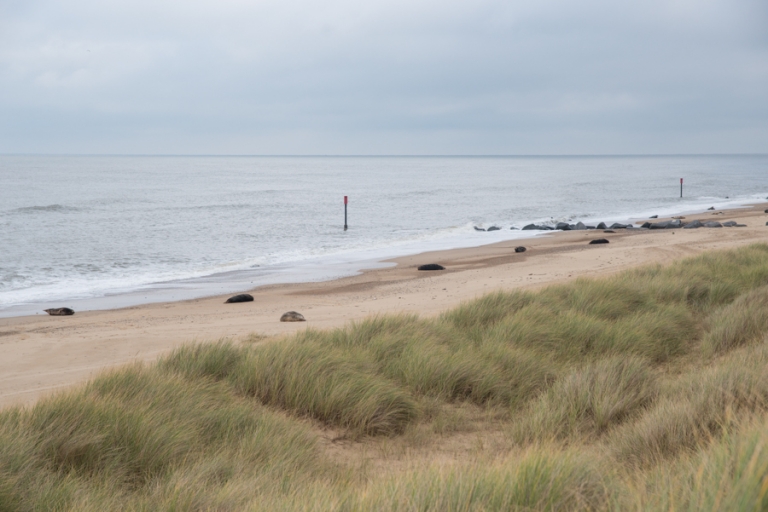 What Should You Wear

It’s wintertime aboard the north sea and the wind whipping across the ocean can be brutal, so wrap up warm! We wore walking boots, hats, scarves, gloves and winter waterproof coats. Alternatively, you could wear wellies or trainers you don’t mind getting dirty.

When we visited it was raining and the puddles were growing, so be prepared for all eventualities! 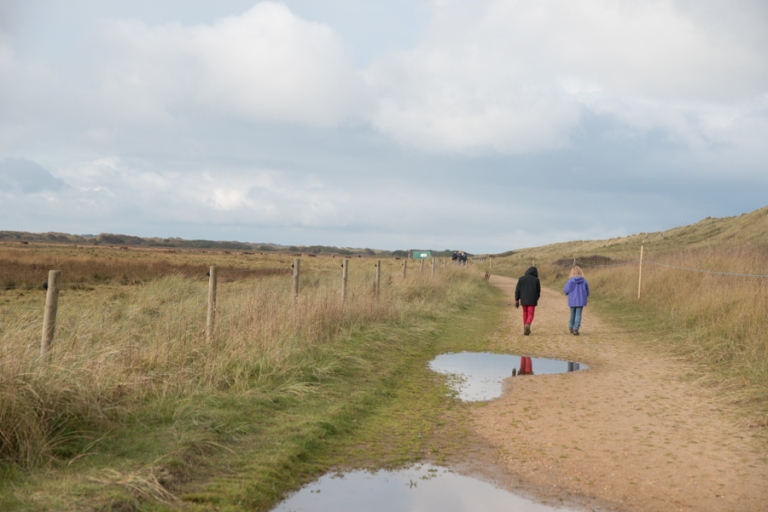 Part of the walkway with puddles

The sandy pathway to the seals is relatively flat and only about a mile long however to gain access to the two viewing areas, you climb a number of steep, wooden steps.

People with mobility problems may struggle to gain access. Pushchairs would be difficult and even all-terrain buggies may have difficulties with the softness of the sand. 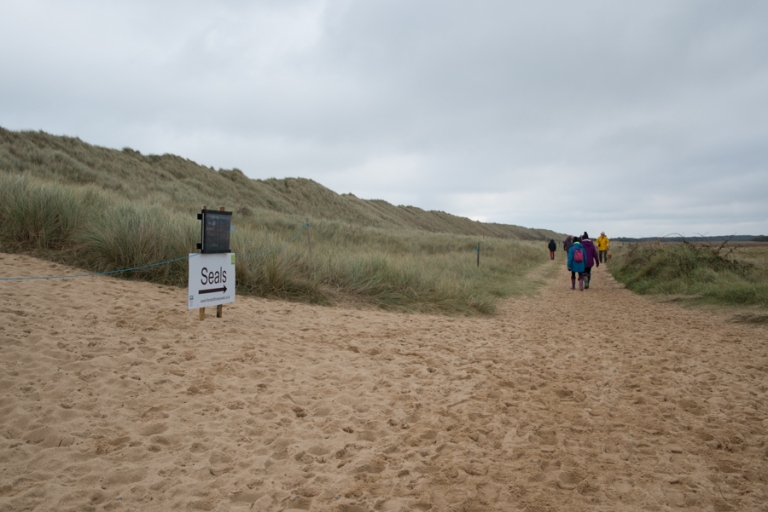 The start of the walk from the car park: Grey seal horsey gap

There Are Kid Friendly Facts

The terrain is either sand or hard sandy path, easy enough for kids to run away and explore.  What we really liked were the amount of signs that were appropriate for aged 6+ kids to read. The signs were all facts about grey seals and it made the walk really enjoyable for the kids who raced off to find the next fact. 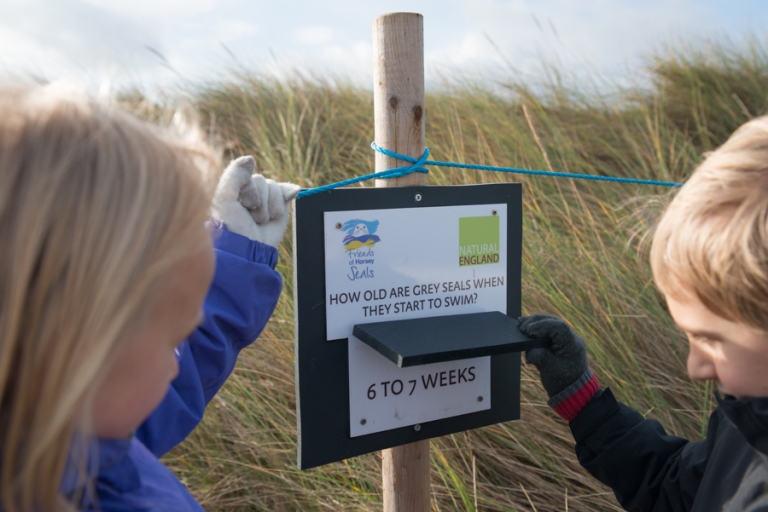 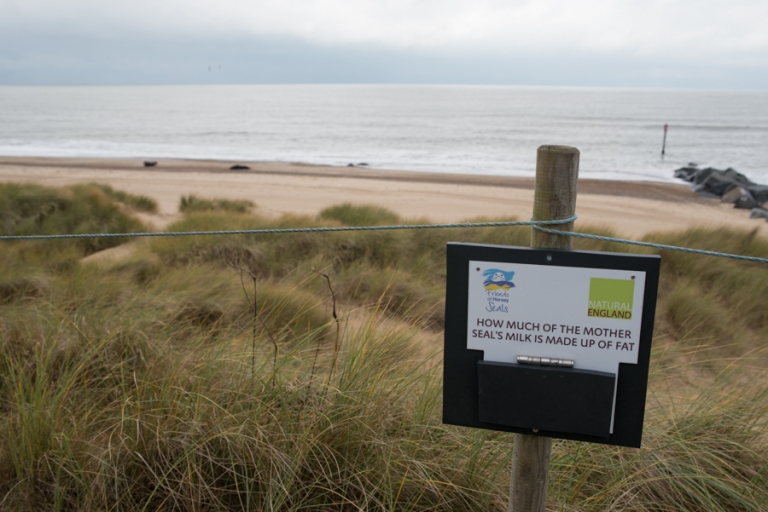 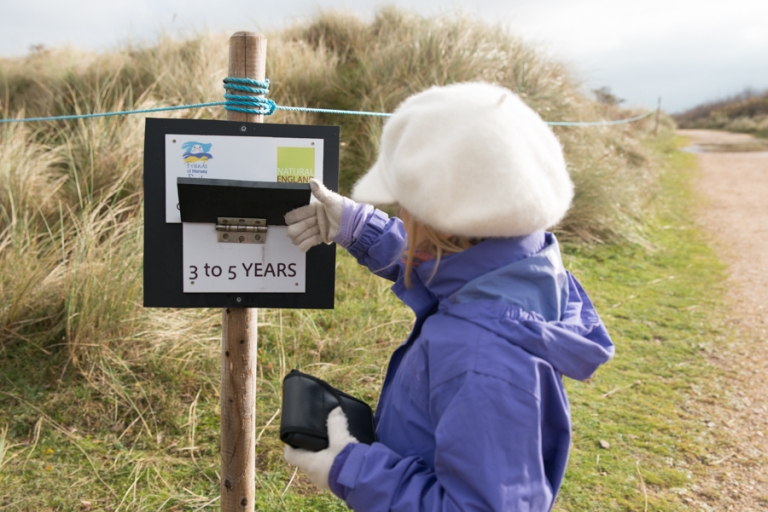 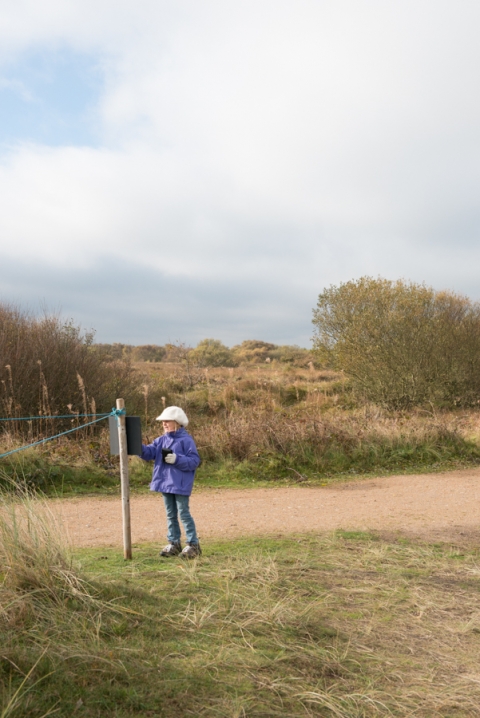 There Are Patrol Wardens

The beaches are controlled by volunteer wardens ‘Friends of Horsey Seals’ who are there to protect the seals as well as educate the public. We were lucky enough to meet two and they were both incredibly knowledgeable and welcoming. You can become a member and support the seals at a  cost of £5.50.

The patrol wardens are there to protect the pups because some people get too close. Obviously, you’re limited from going onto the beach and must stay on the narrow pathways in the dunes. This means you can’t get very close, so don’t forget to take cameras with long lenses and binoculars. 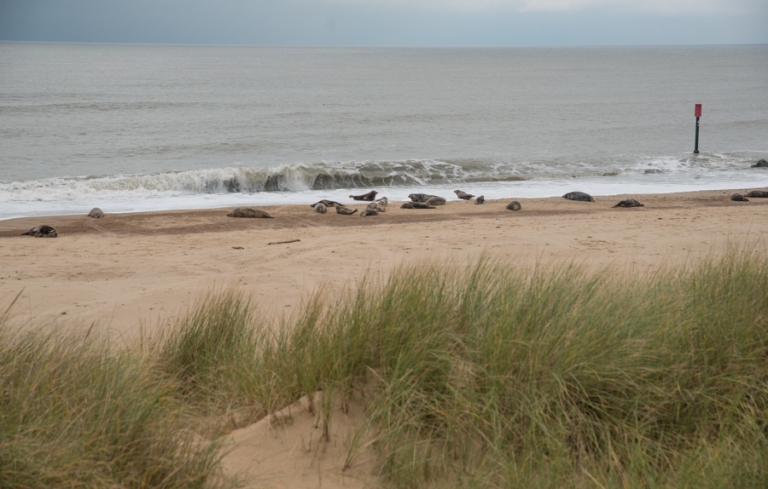 Grey seals on the beach at Horsey Gap

Where Else Can You See Seals In Norfolk?

There are two different types of seals that visit Norfolk; the common seal and the grey seal.

In the summer, between June and August, Common Seals produce pups and those pups can swim almost immediately. The Grey Seals in comparison have their pups between November and January and their young cannot swim until they have lost their first fluffy white coat. They hang around with their family on the beach for the first month of their lives before they test the water. 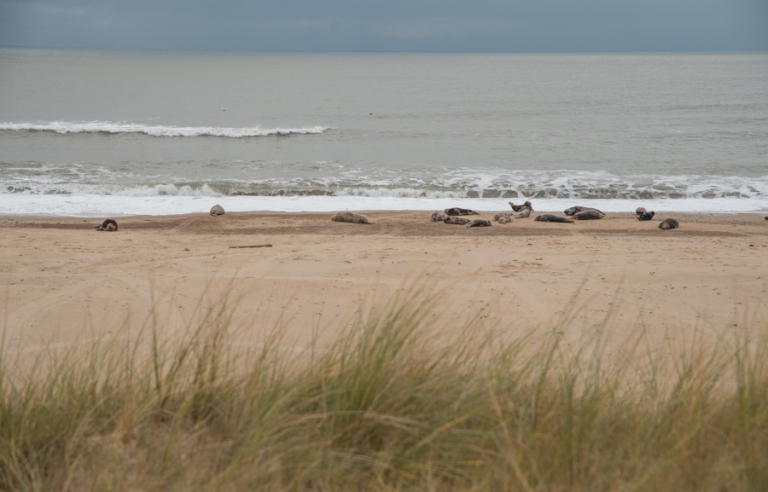 Grey seals on the beach at Horsey Gap

Where Could You Stay Locally?

Use this interactive map to search for accommodation locally.

Looking For Other Things In The UK To Do?