There are only two UK Via Ferrata and just one in Scotland. It’s brilliant fun, a little bit of a thrill and if you’re adventurous, you’ll love it. Here’s what Via Ferrata Kinlochleven is like and how you can book it.

What Is Via Ferrata?

Via Ferrata was born in Italy and means ‘iron path’. It’s a type of climbing path that uses steel cables, rungs and ladders affixed to and between rocks where climbers harness themselves to the cables using two leashes. The iron rungs (stemples), pegs, carved steps, ladders and bridges provide footings and handholds allowing climbing on otherwise dangerous routes with very little risk.

A Via Ferrata can vary in length from short routes taking less than an hour to longer, more demanding routes covering significant distance and altitude (1,000 metres or more of ascent taking eight or more hours to complete).

Via Ferrata was first used back in the 1800s and the heart of Via Ferrata is in the Italian Dolomites. In certain areas of the Dolomites, it is possible to link several Via Ferrata together, staying overnight in mountain refuges and undertaking extensive multi-day climbing tours at high altitude.

The Scottish Via Ferrata, however, follows Grey Mare’s Tail waterfall which is only 60 metres/197 feet high.

What Do You Do In Via Ferrata?

You’re given full instructions beforehand but briefly,  using a harness, you clip yourself onto the fixed cables and climb up the steel rungs that are drilled and cemented into the rockface. Every few metres you must unclip one of the leashes and swap it onto the next section of cable and then unclip and swap the second leash. This way you are permanently clipped onto a continuous safety cable, enjoying what would otherwise be an inaccessible route.

There are a couple of sections where you must walk across a rope that straddles the gully of the waterfall and on one occasion you glide across right in front of the water’s sprays.

Where Are the UK Via Ferrata?

The UK only has two Via Ferrata, one in Honister Slate Mine in the Lake District and the other in Kinlochleven, Scotland which is near Fort William.

What To Expect From Via Ferrata Kinlochleven

You’ll be completing the Via Ferrata with a group of other people. Our group size was 8 and the whole process took approximately 2 hours from briefing to getting back to the car.  We were very fortunate with the weather and had blue skies and some sunshine but this area is prone to rain and cloud.

You need to be in relatively good physical strength as there’s quite a bit of climbing, pulling, finger dexterity and balancing required.  You don’t need any previous experience and I’d say anybody who has a degree of fitness is capable of doing this.  It isn’t too strenuous although there’s quite a lot of hanging around.

What Do I Need To Do It?

You’ll need to book online first and then

How To Book UK Via Ferrata Kinlochleven

You can book directly through Vertical Descents, check out their prices for Via Ferrata here. I think we paid £240 for four of us to do this.

Video Of Uk Via Ferrata From Kinlochleven

Could You Pin This, Please?

You can add this post to Pinterest using this image and don’t forget to check out our boards too. We love writing interesting content for you and when you share and save our posts, it enables us to write more. 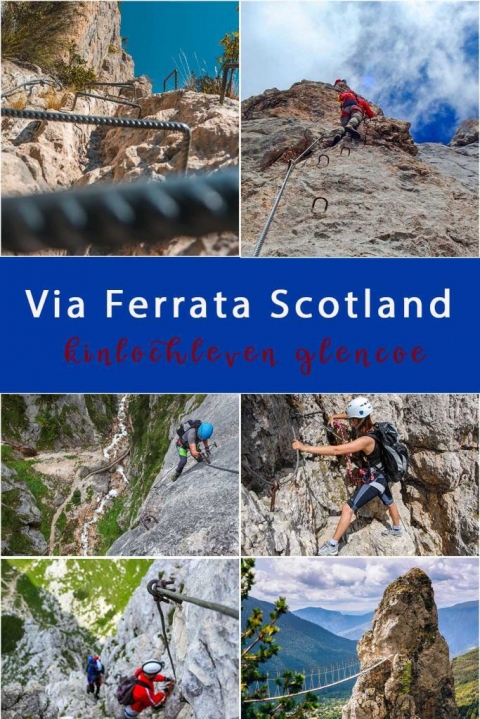 Spread the love
Posted in Scotland, UK
« Island Hopping Croatia. What Is The Best Croatian Island To Visit?
Summer Holiday Books To Read 2020 »