We like to do and see the authentic side of a country. I want my kids to see how real people live and work in their own communities. For this reason we like to stay outside tourist areas and book directly with agencies that promote fair wages and good working conditions.  We came across De La Gente, on the outskirts of Antigua (Guatemala), who offer a number of local tours run directly by farmers. I also want our kids to have a good understanding of where their food comes from so we decided to book a peanut butter tour with two women from a local village. 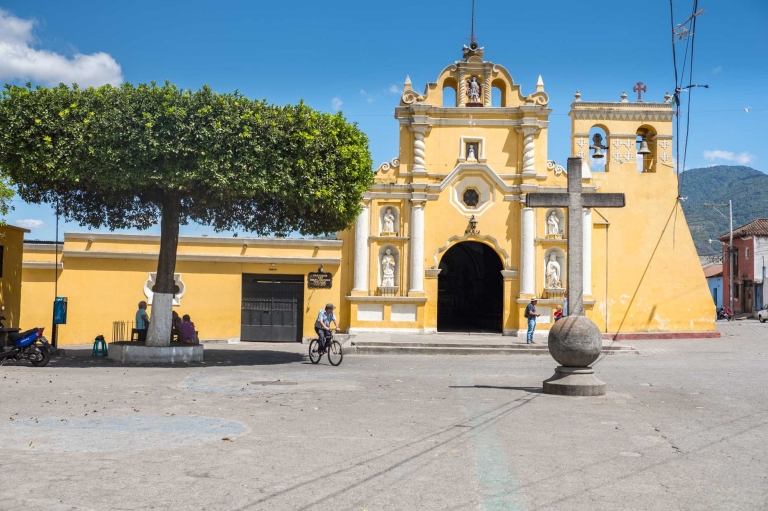 The village of San Miguel Escobar

De la Gente is a social enterprise which is based in the small village of San Miguel Escobar on the outskirts of Antigua. I also went on a DLG coffee tour courtesy of another social enterprise, WakuliMarket.

DLG supports many farmers and their families within the local communities. DLG support over seven coffee co-ops and a large number of artisans who make products such as peanut butters, lip balms, coffee, teas & soaps. 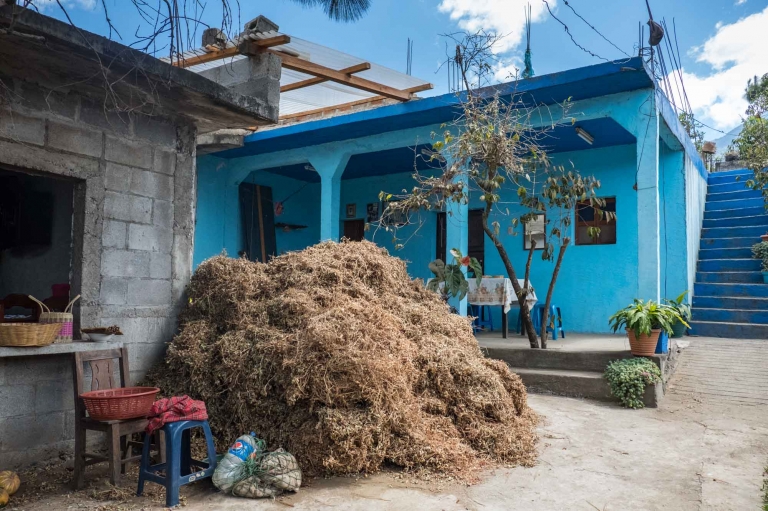 Peanuts drying in the yard

What does De La Gente do?

De la Gente has three main arms to its business: 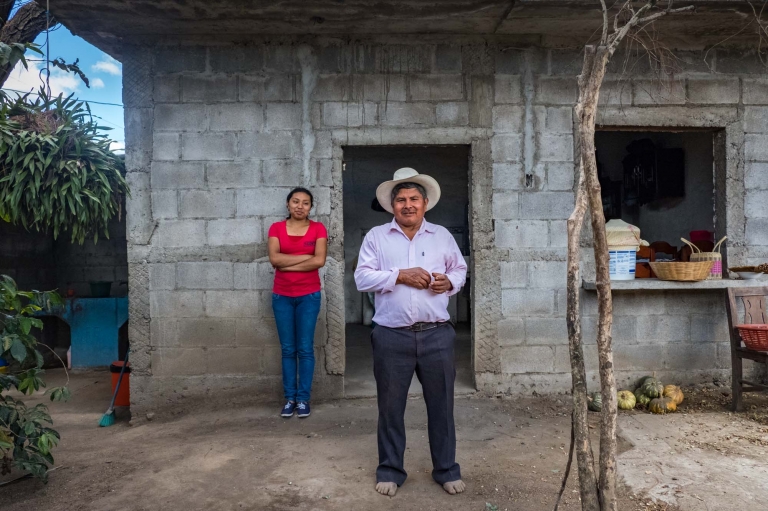 How Much Does This Cost

The tour for five of us cost $77.25/£57.29. Many tour agencies in Guatemala prefer to do business in dollars rather than quetzales before it’s more stable.

However local business and people trade in Quetzales.

The peanut butter at the end cost Q25 and Mercedes Coffee was Q60.

We chose to get an Uber to and from Antigua and it cost a few dollars each direction. 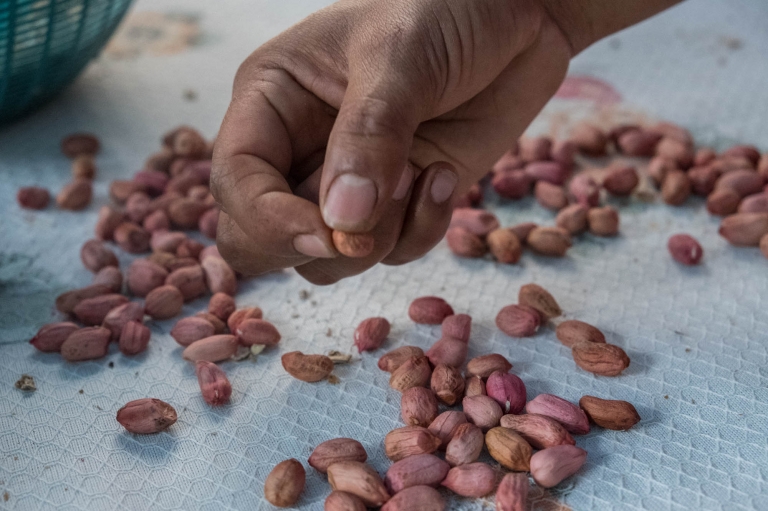 Accompanied by our translator, we went to the house of farmer Mercedes where he lives with his two daughters Lidia and Lilian to learn about peanuts.

Actually visiting a farmer’s house gives you a wonderful insight into how true Guatemalans live. It’s an opportunity not to be missed and for our kids, we believe it is essential that they realise not everybody lives in an ‘MTV crib’!

Our kids are incessantly bombarded with images of materialism and indulgence and I do think it’s important to counter that with real life. The tour is more like a hands on lesson where you’re encouraged to learn the process by doing it yourself. 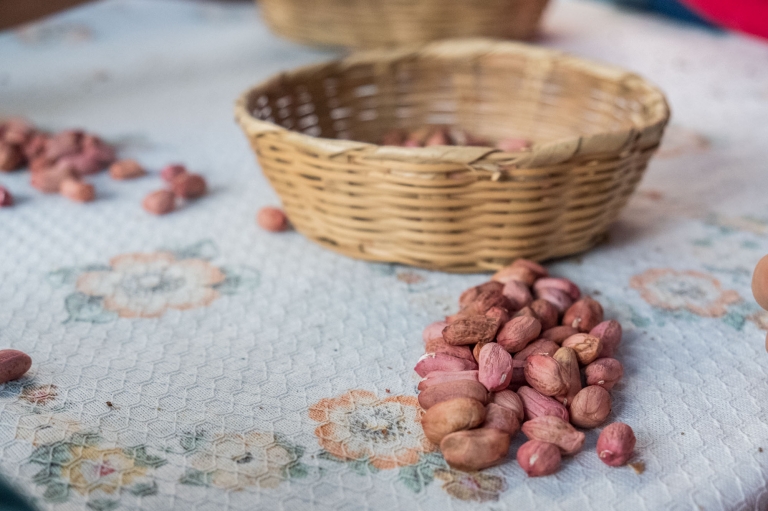 Did you know that in order to grow a peanut plant, you firstly need a peanut? I did not know this although it seems fairly obvious!

Peanut plants are sown during the wet season by hand. The peanut farmer painstakingly sows a peanut every 30cm, burying it 5cm into the ground. In just one day, he will expect to sow TEN THOUSAND plants!

All by hand. Can you imagine that?

If you haven’t been to Guatemala, let me tell me how hot, humid and wet it can get. I would not want to be out in a field planting peanuts in weather like that! 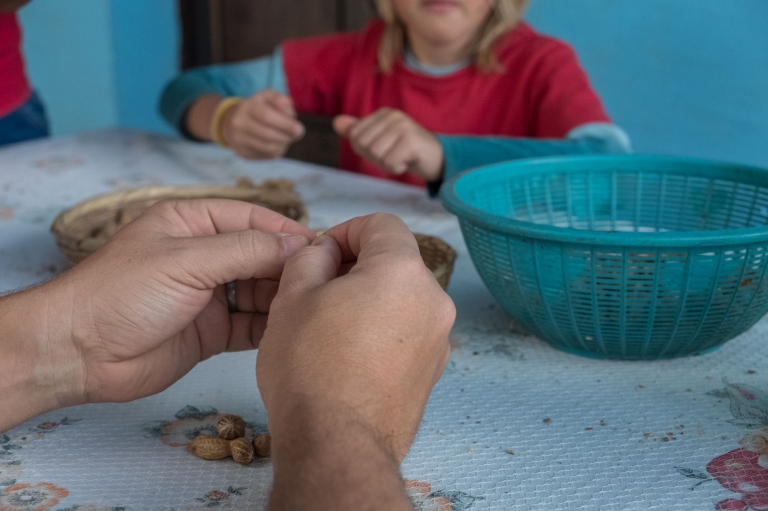 The peanut plants take four months to grow at which point they’re picked and left to dry in the field for about a week to two weeks (depending on the weather).

The plants are then brought back to the farmers house and from there they’re stored and dried further before they’re slowly shelled, cooked, peeled and turned into peanut butter.

It is a lengthy and laborious process but it does produce the most delicious and fresh peanut butter we’ve ever tasted. 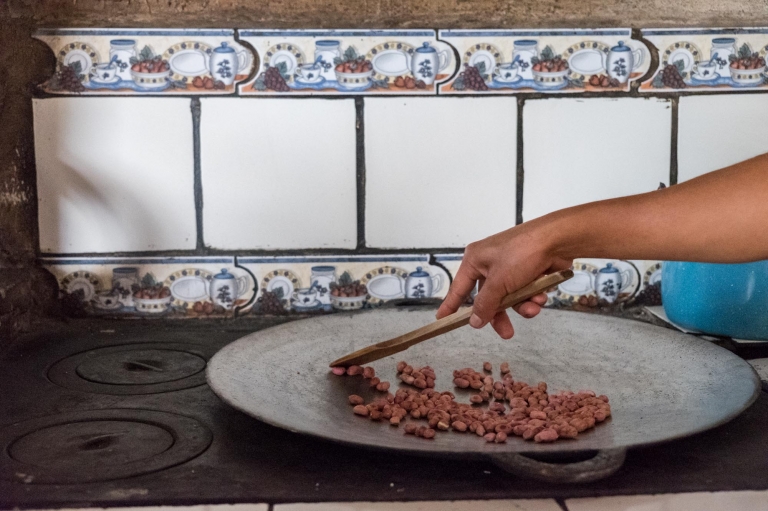 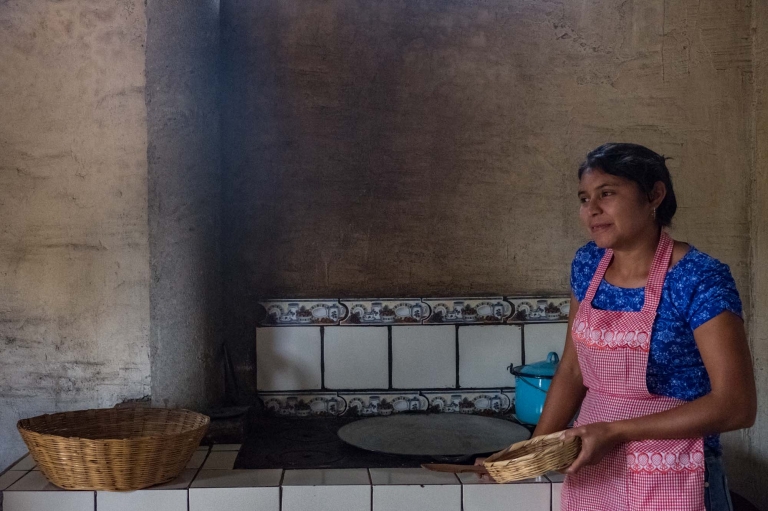 Lidia in the kitchen 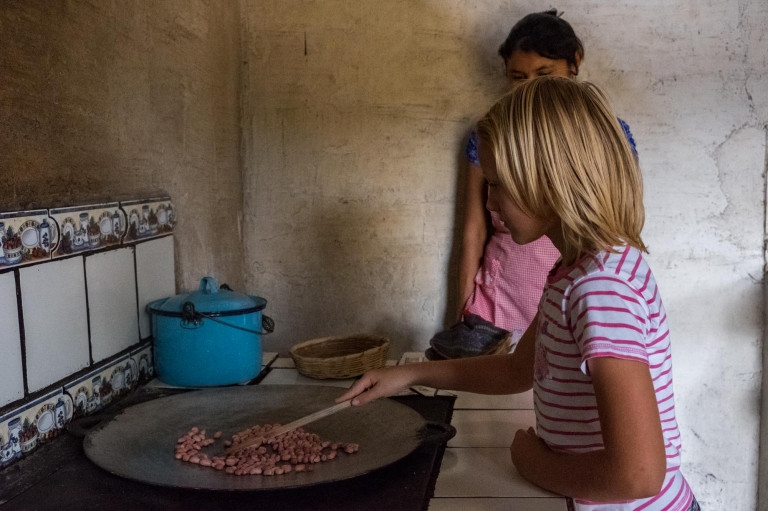 Imogen roasting peanuts in the kitchen

Our kids love to cook and they adore peanut butter so they were really in their element sat around a table listening to Lidia whilst shelling the peanuts into a small basket. Lidia was really patient with them and we later understood that she’s now training to be a teacher. Working with De La Gente has enabled her to study further.

Once the peanuts have had their outer shells removed, we were transported into the kitchen where Lilian slowly roasted the peanuts to loosen their skin for removal and gave us a try too. 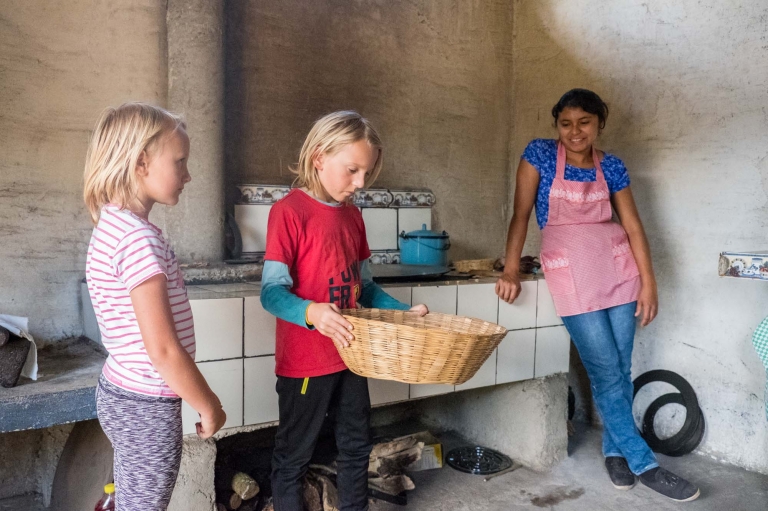 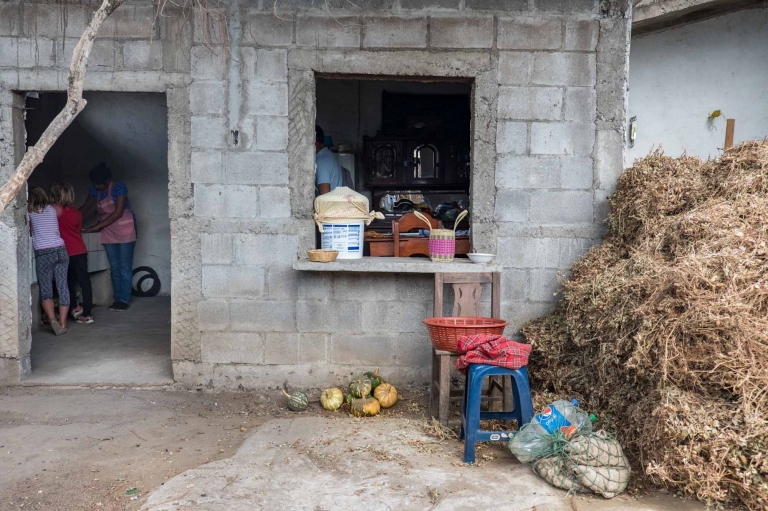 Cooling the peanuts slightly, they are then peeled and fanned to remove any remaining husk before they’re transported onto a slab of volcanic rock for crushing.

The kids had fun shelling and peeling the nuts but they really enjoyed being in the kitchen and having the chance to roast the peanuts and then grind them into butter!

It was all really exciting for them to experience and it sure beat buying a shop bought jar! They now have a new appreciation of how hard farmers and their families have to work to bring a pot of peanut butter to our table. 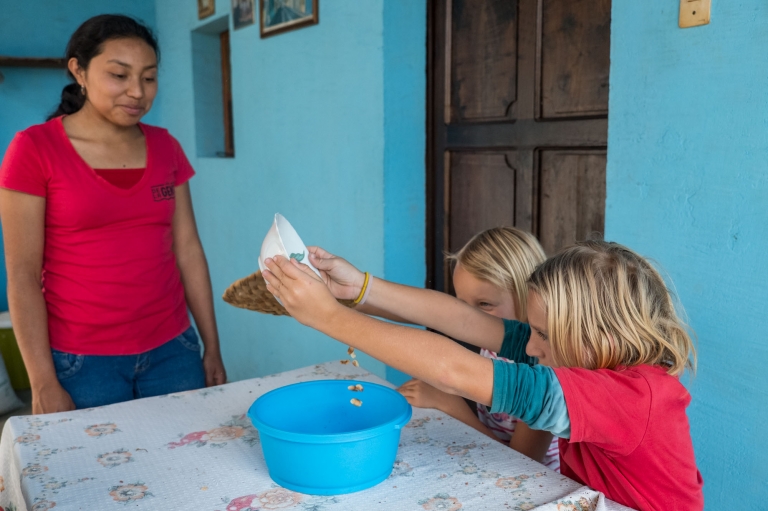 Fanning the cooked peanuts to release the husk 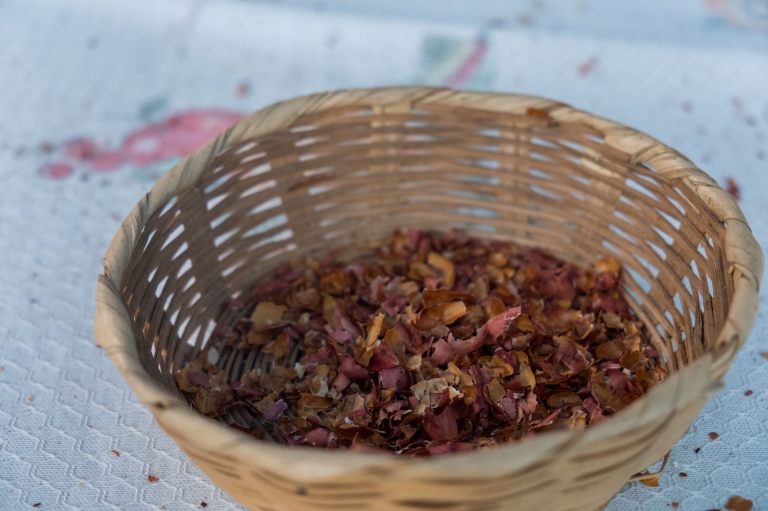 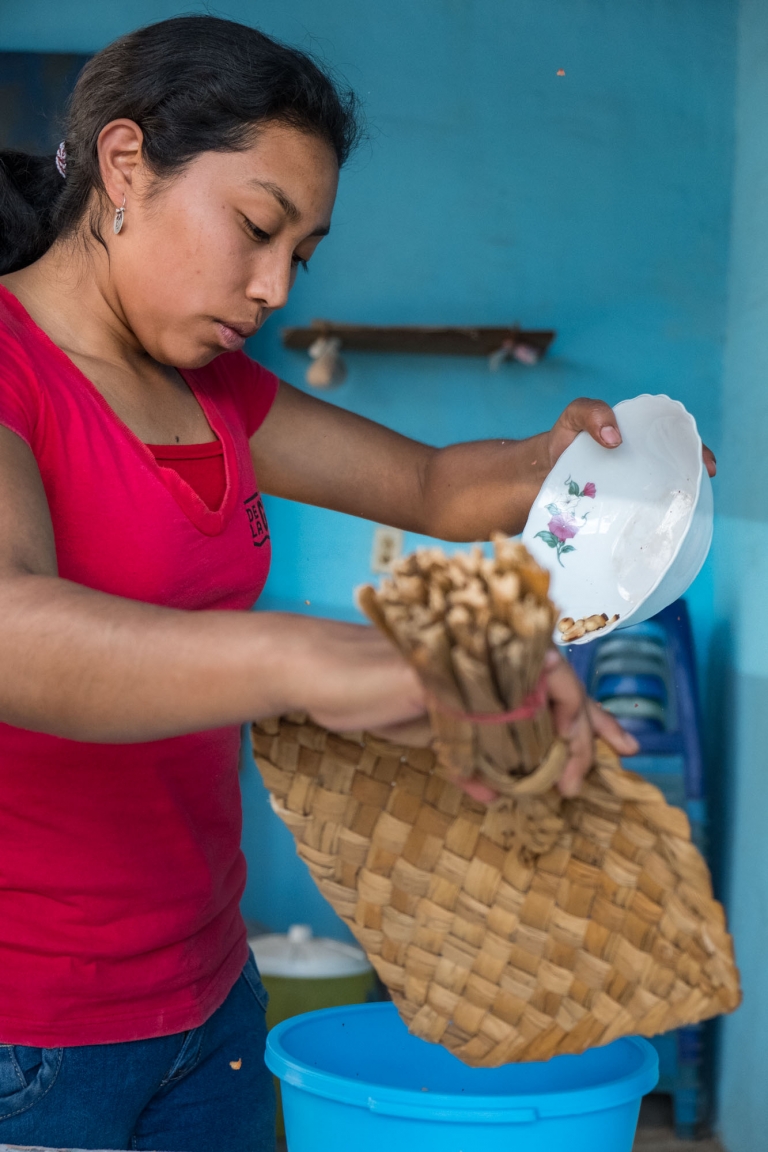 Antigua is surrounded by volcanoes so it’s no surprise that large scale slabs, similar to pestle and mortars, are sold at all the local markets.

They’re called ‘piedra de molar’ and they’re made of volcanic stone. They look like a curved bit of rock with a slightly rectangular rolling pin and they’re used to crush everything including, peanuts, spices and coffee beans.

Our technique required improvement! We weren’t as good as Lilian who instructed us but eventually we managed to grind the nuts into a butter. 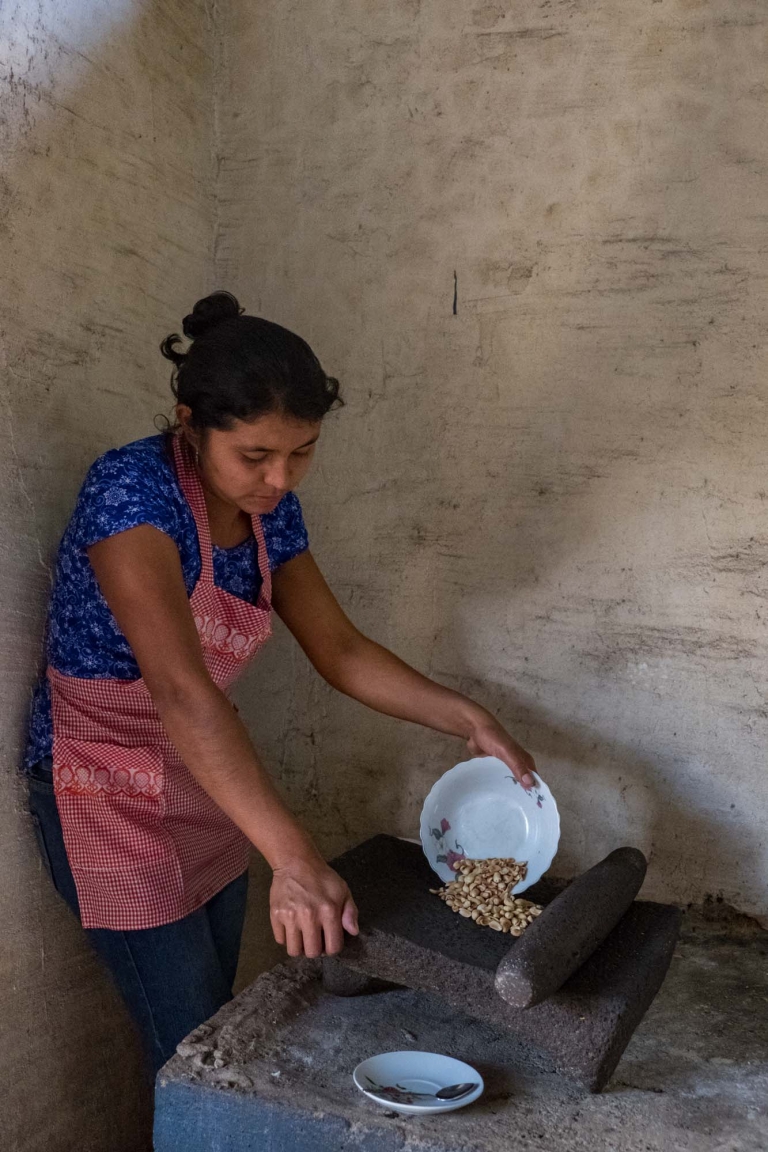 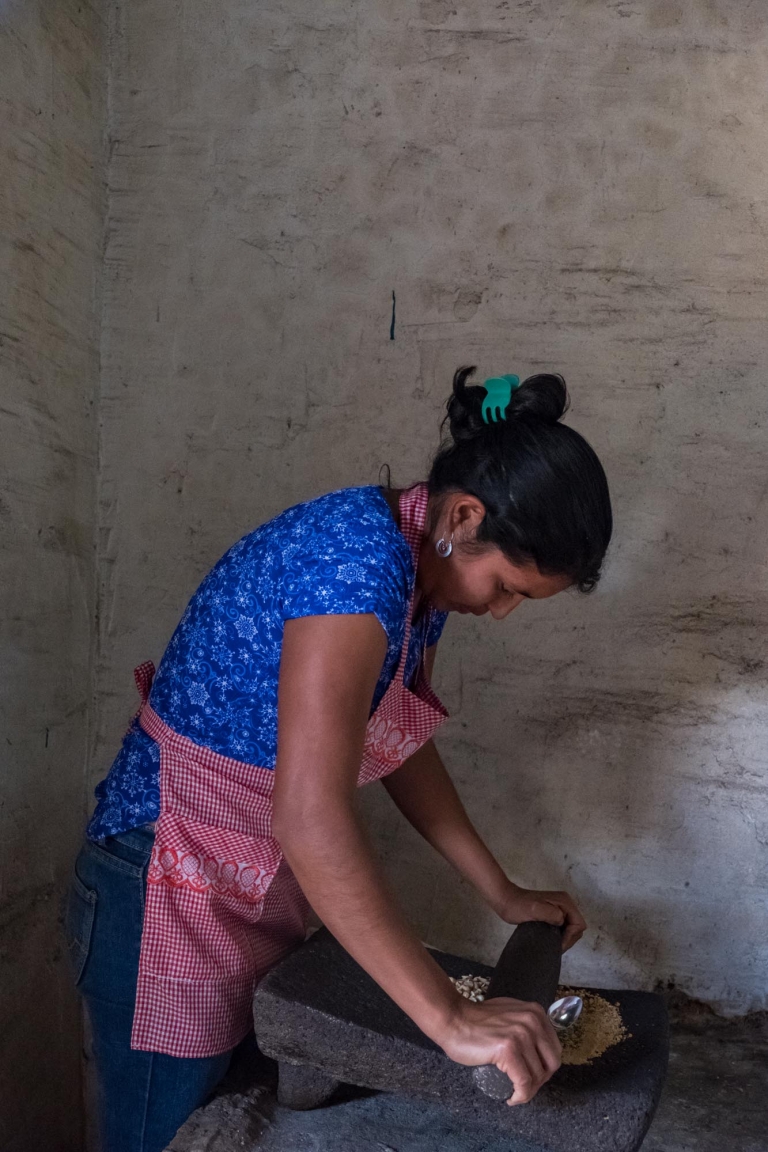 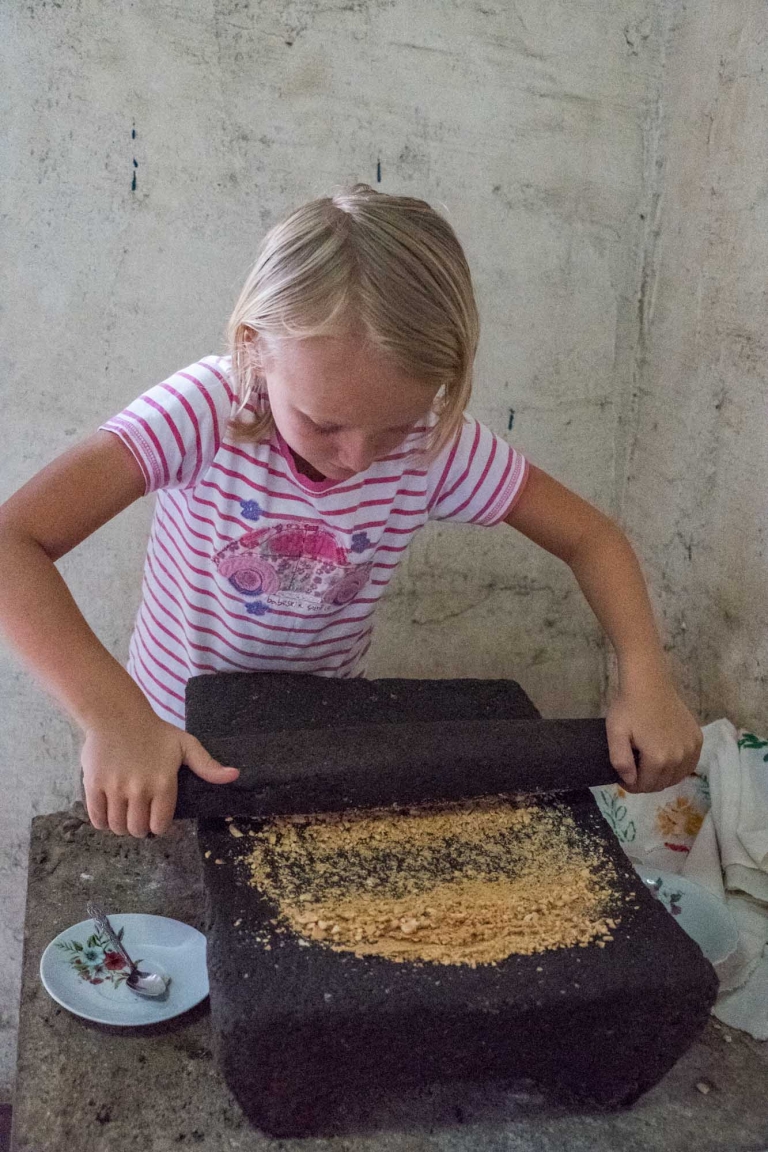 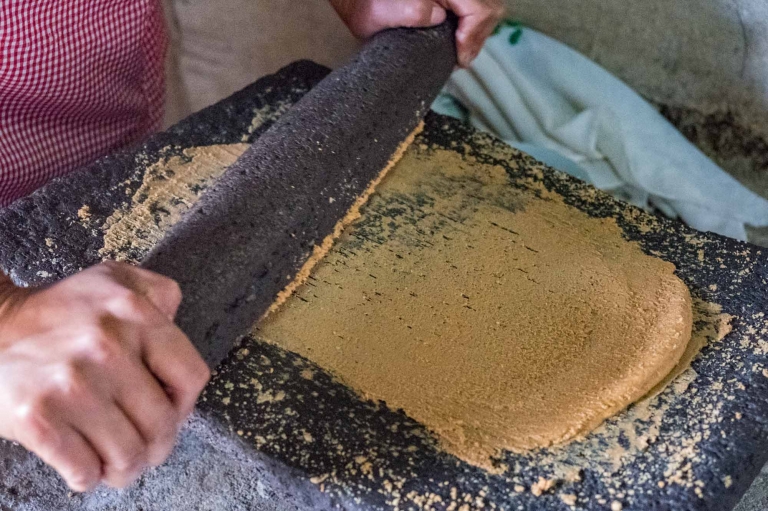 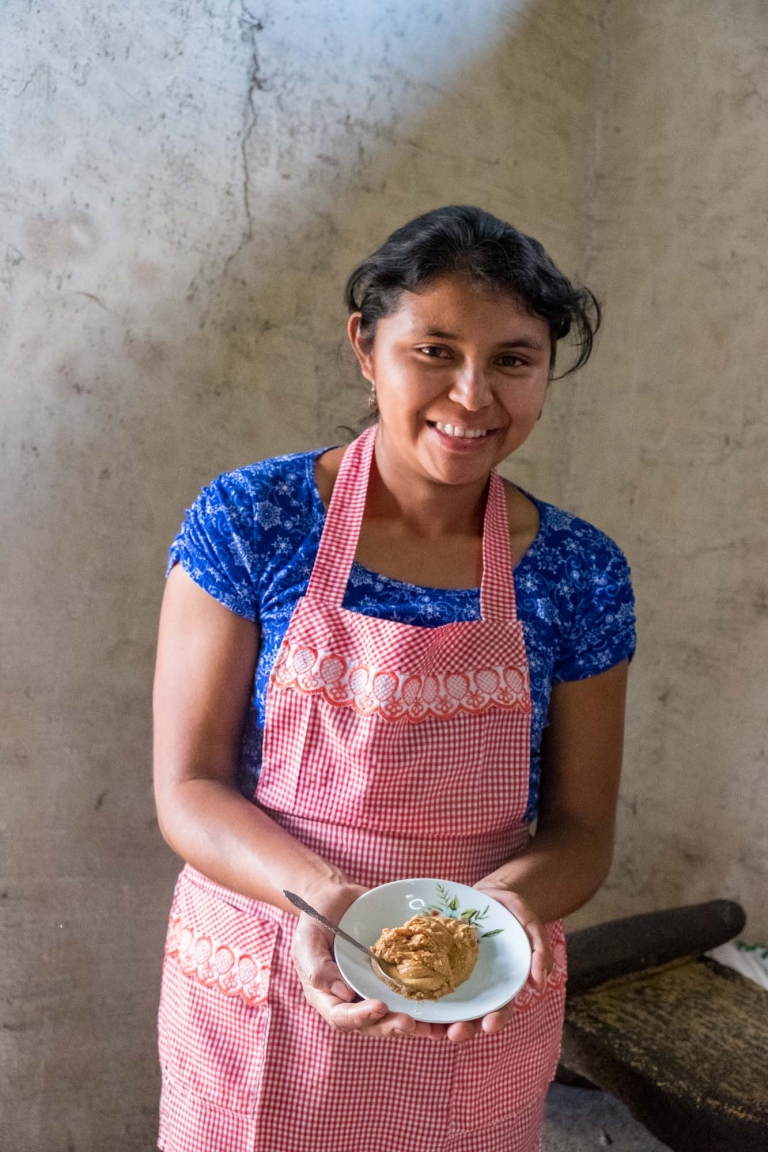 We even got to try some then!

Whilst we were busy rolling and pressing the peanuts into butter, Lidia whipped us up some tortillas and baked them on the stove.

Tortillas are a staple of Guatemalan diets and they’re often made simply with maize flour and water. They’re rolled into a ball and then patted between the hands to flatten them. A simple, easy and cheap addition to any meal or snack. 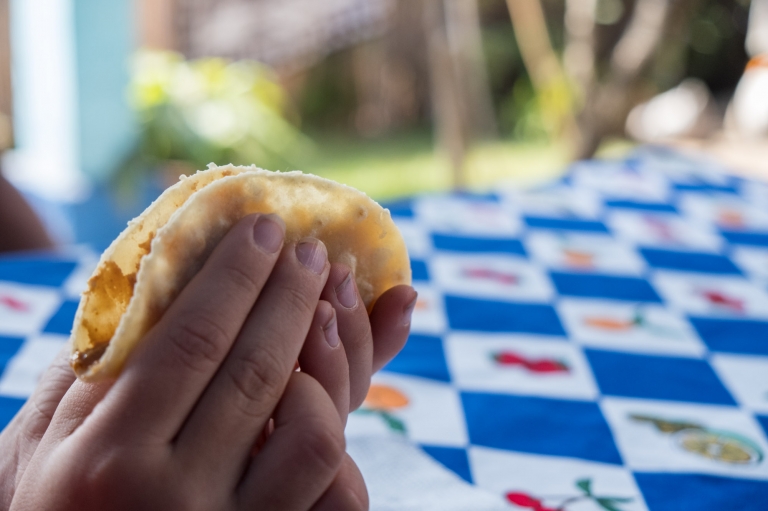 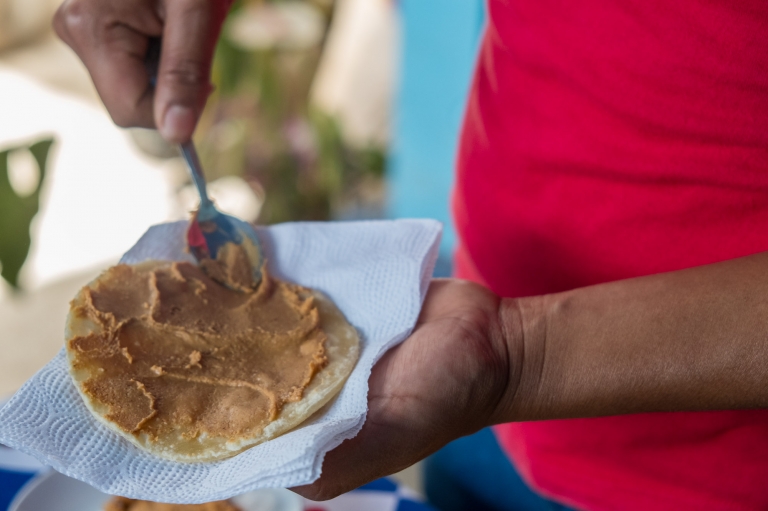 You Can Buy More Peanut Butter

As part of the tour, you’re given a sample jar of peanut butter to take home with you however as we knew the following day we would climb Acetenango Volcano (and as peanuts are an easy source of protein) we decided to buy more… quite a few more!

And some coffee too. 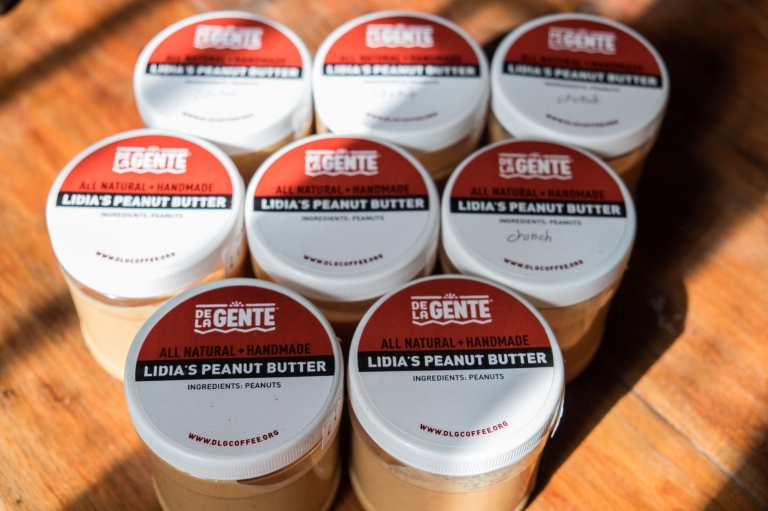 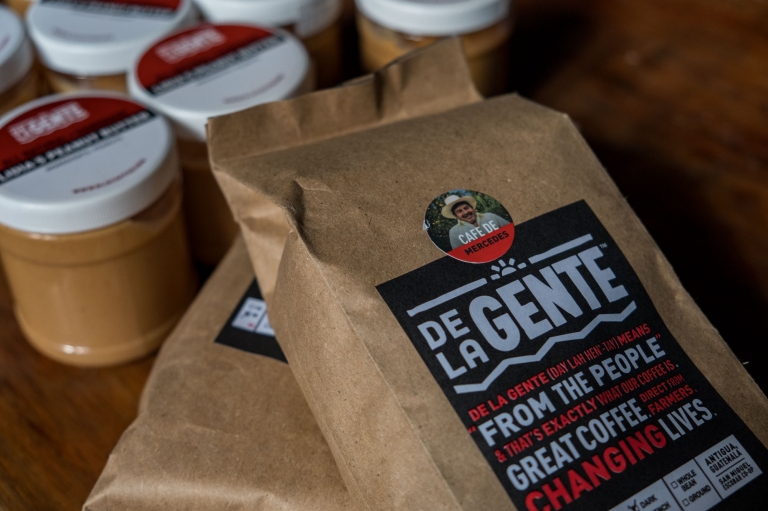 If you’re visiting Guatemala and looking for kid friendly activities, we can definitely recommend De La Gente and the peanut butter tour.

Add this pin to your board. 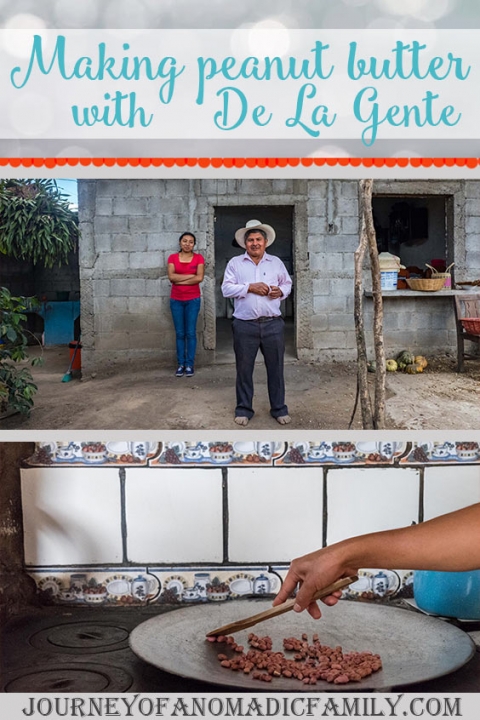 Spread the love
4
Shares
4
Shares
Posted in Guatemala
« Driving To Bulgaria; What Does It Cost?
Dog & kid friendly castles in Northumberland »