Driving To Bulgaria; What Does It Cost?

Driving to bulgaria? What does it cost? We’ve done it three times now and every time I say never again! We’ve had many questions about the cost and how effective it was to drive in comparison to flying. This post explores the different routes we’ve taken and how much it cost.

What do we drive?

It has a 75 litre fuel tank and for motorway driving we generally sit on 80mph/130kmh.

We drove from West Sussex to Mezdra in Bulgaria and took a holiday for a week in Liechtenstein. We chose to take a holiday because Rich was working overseas in China and I didn’t want to do the drive alone with the kids and animals so I dropped him off at Zurich airport and then drove into Liechtenstein where we spent a week.

There is a newly built motorway that enables you to travel from Hungary to Bulgaria through Serbia (thus eliminating Romania) BUT and this is a big, however, Serbia is not in the EU….

Some people have told me that if you travel through a non-EU country with an EU pet passport that this voids the EU passport. This is not true and I can find no official vet to confirm this however I have heard horror stories of bribery & corruption at the Serbian border involving a pet and some people have told me that British vets will not sign the Serbian health certificate because it isn’t a DEFRA form…

DISCLAIMER: All third-hand stories not verified!

Supposedly, f you’re travelling with a pet there is an additional requirement of a health certificate, translated into Serbian, and a vet checking the pet at the border and a subsequent fee.

DISCLAIMER: We have travelled through Serbia four times since with our dog and three cats, border officials have seen them and we’ve not been questioned or asked for further documentation.

So for this reason we did not drive through Serbia in 2018 – although we have done three or four times since. 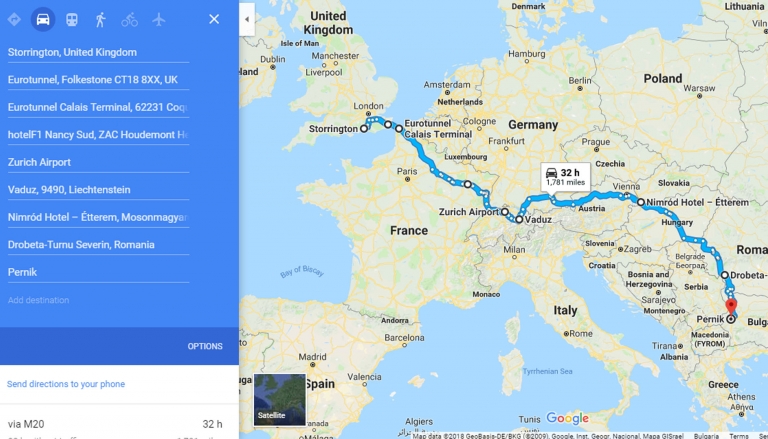 Driving to Bulgaria; our route 2018

In September 2019 we undertook the drive again but this time from Norwich. We left at 10am on Friday and arrived on Sunday at 3pm! It is a long, boring and hard slog and each time we do it we say ‘never again’.

This time we decided to drive as long as possible for as cheaply as possible. This is because we were towing a high sided trailer, plus had the car and a roof box full of stuff and we weighed approximately 3.5 tonnes! We were forced to drive much slower than we normally would.

The only difference with this route is that we no longer have our dog (but do have 3 cats) and thus didn’t need to stop for pee breaks with him.

Because of the trailer, the crossing fee was significantly more than we usually pay. Had we not had the trailer we could have saved up to £270 on this crossing fee.

DISCLAIMER: If you have no trailer you can save up to £270 on the crossing and of course you wouldn’t require as much fuel.

I Use My Revolut Card To Pay For Everything

Revolut is our top international card to use. It’s simple to use, it’s topped up within the app, I can see everything I spend in real time, I get notifications when a payment has gone out and I can add multiple currencies. For us, it’s a win win, I have ultimate control over the card and not the bank! They also give us free cash withdrawals overseas.

2019 Bulgaria to East Anglia Via Hook of Holland

In December 2019 we decided to hop-foot it from Sofia back to East Anglia via the Hook of Holland using the ferry. We did not reserve hotel rooms and instead slept in the car and on the ferry.

This is the easiest and quickest route we have taken so far. 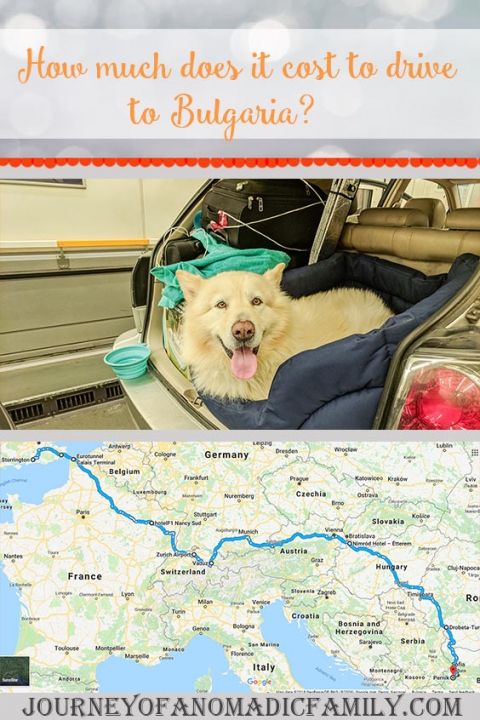 Don’t Leave Us Just Yet. See what Else We’ve Been Up To In Bulgaria