How to book train tickets in Spain

This post is all about how to book train tickets in Spain. Some tips from us on how we think it’s easiest and how you can use the trains in Spain.

Why Did We Catch A Train In Spain?

I chose Spain for my first attempt at backpacking solo with the three kids. It was the first time we’d travelled really without our car and I was pretty apprehensive about how to get around.

Taxis, Uber, BlaBlaCar – they’re all great but they’re restrictive and can be expensive for four people. Coaches and buses are cheap but slow and did I really want to spend HOURS on a hot bus so the only option was to catch a dreaded train…My heart sank, but really, it wasn’t like that at all. It was brilliant.

Catching the train turned out to be the easiest method of travel we’ve booked so far.

It really was that simple. So here are a few of my tips on how to book trains in Spain and how to enjoy the flexibility it can give you.

What Are The Different Trains In Spain?

Renfe is the public owner of Spain’s trains and it manages all the passenger trains in Spain. The country has currently 14,000 km of railway infrastructure and more than 1,550 stations.

These are the different types of trains Spain has:

The trains with the noses (AVE – High-speed trains)

Reaching up to 310 km/h these are the fast trains that connect the major cities. You can travel from Madrid to Barcelona in less than 3 hours! 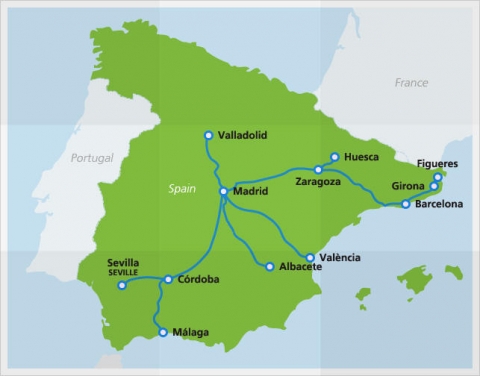 Similar to AVE but a little bit slower, reaching a maximum speed of 250 km/h. These trains use both high-speed and regular tracks and reach a larger number of destinations.

Take a look at the map of main connections in Spain for train lines.

Quirky and slow, these trains take their time to pass through countryside. Some even serve food and offer sleeping accommodation.

What’s The Easiest Way To Book Train Tickets In Spain?

When I was researching how best to book tickets, many websites suggested RENFE was unreliable and the English version rarely worked. I didn’t have that problem but here are some ways to book a ticket on RENFE trains.

If you’re doing a multitude of AVE train journeys in under a month, it may be worth considering buying a RENFE Spain Pass.

In order to print the tickets, we had to arrive at Seville station no less than 15 minutes before the train. We visited one of the many ticket machines dotted around the station and using a reservation number and my credit card, the ticket machine spewed out 8 tickets for our return journey.

It was remarkably simple, straightforward and stressless. It was amazing and I was flabbergasted.

What Should You Expect From Your Spanish Train Station?

Seville is a big city and the train station was a reflection of this. It had a number of restaurants and coffee shops in it as well as a busy ticket office. However Cadiz, which is a much smaller station, only had one small coffee shop that sold coffee and ham sandwiches.

We made the mistake of presuming our train station would have something suitable for breakfast however I guess my idea of ‘sensible’ is nothing similar to Spain’s idea and especially if you’re a vegan!

Our train was serviced by a guard and I think all trains are. He checked our tickets and walked on by.

The only trains not to have toilets are Cercanias trains. Most are large enough for wheelchairs.

Bag storage on the trains

Except for Cercanias, each carriage has a bag storage area as well as luggage racks located above the seats along the entire length of the carriage.

How Did We Rate Taking The Kids On Spanish Trains?

We were very happy with how easy it was to book tickets. Even happier we got a discount of 30 euros.

They were clean and tidy although there was no food we could eat and no toilet at one station. Printing the tickets was easy and detailed our carriage number and seats.

Our four trains all ran on time, they were easy to board, easy to store our luggage, they were clean and didn’t smell. IN comparison to British trains they were 1000 times better.

Our Perspective Of Train Tickets In Spain

I feel like it was an exceptionally successful introduction to Spain’s train lines. Certainly a much better experience than catching trains in the UK and Australia.

The kids were happy and comfortable in their own chairs. We all had a great view out of the window and we could see the train’s speed as it was shown on the monitor in our carriage.

The trains were very clean and in immaculate condition. I think the journeys were well priced and the prices matched what I was finding on Blablacar and of course didn’t come with any of the constraints of being in somebody else’s car.

The timetable was very regular and offered a large choice, especially on a Sunday. All in all a great experience that we will repeat. 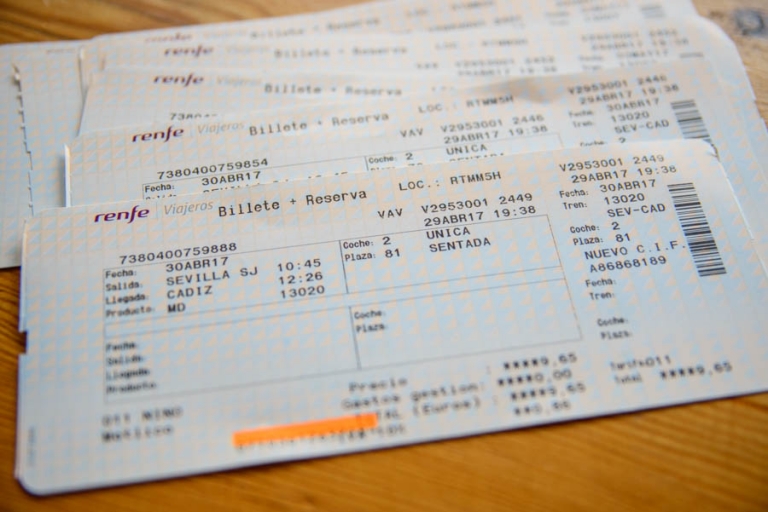