We took the hard work out of vetting bike tour agencies for you and found the best bike tour in Seville that we could. Here’s what we found, did and how you can book this Seville Bike Tour too.

Seville is fast becoming the most bike friendly city in Europe and what better way to see a large city (with kids) than on a bike tour.

We thought Seville was a really cool city but we only managed to cover a fraction of it by foot. By the time we visited in May the temperature was already searing and the kids weren’t so keen on covering kilometre after kilometre on foot in the heat.

Surprisingly when I suggested a bike tour (I was fearing they’d think it was lame), they all leapt at the chance and were really optimistic and couldn’t wait.

What Seville Bike Tour company did we find?

We wanted a company that only had small group sizes and would be completed in English. We also wanted the tour to be kid friendly with not too much history to bore them.

So we found a tour with Get Your Guide and met up with them to try out our bikes and meet our tour guide.

Bikes and kids in Seville

I was looking for bike tours back in 2017, so I hope things have changed, but we did struggle to find a tour agency that would accommodate kids. Most agencies I contacted just said they’d lower the bike seats and handle bars as low as they’d go. Well duh! That isn’t going to work if their bodies are smaller than the frame.

In fact most agencies were very blazé about the kids’ safety and this was about the fourth agency I contacted.  Thankfully this tour not only cater for kids but deliver on helmets too!

Why am I writing about this two years later?

I recorded the route, and took photos with a tracking app, on an old Samsung mini phone that later died. It was only recently that I gained access to the app and managed to download the photos.

Needless to say that all the photos on this post were taken with a phone camera at the height of midday. Not great for photography but at least it gives you an idea of what to expect.

What the blurb says about the tour?

The blurb for the tour says that you will:

Start from the historic Barrio Santa Cruz and head through the Jardines de Murillo towards the Antigua Fábrica de Tabacos and Seville University.

Continue to Parque María Luisa before heading down to the river and Triana and the Torre del Oro bullring. Next, head north to the Cartuja where you’ll see the Monasterio de la Cartuja before heading back to the center and Alameda.

Explore the nightlife hotspot and wind your way through the streets and alleys of Seville center, stopping at the legendary Campana Café to get your bearings for the infamous “setas” (mushrooms). End with a quick pedal around Santa Cruz, biking past the cathedral and Alcazares.

A map of the Seville Bike Tour we did

You can have a look at and download this map out on GPSies.com

Where did we go?

We didn’t do the exact tour as listed above, either that or it’s changed slightly, but we did do most of it. These are the places in Seville that we stopped off at and learned about.

Things that the kids remember most about this tour?

So as you can see, my kids learned a huge amount of Sevillian history on this tour and generally had a blast upsetting older people, cycling really fast and eating sorbet.

Is this worldschooling for the win?

Why do we recommend a bike tour

How to book this tour?

You can book this tour and loads of others over at Get My Guide. 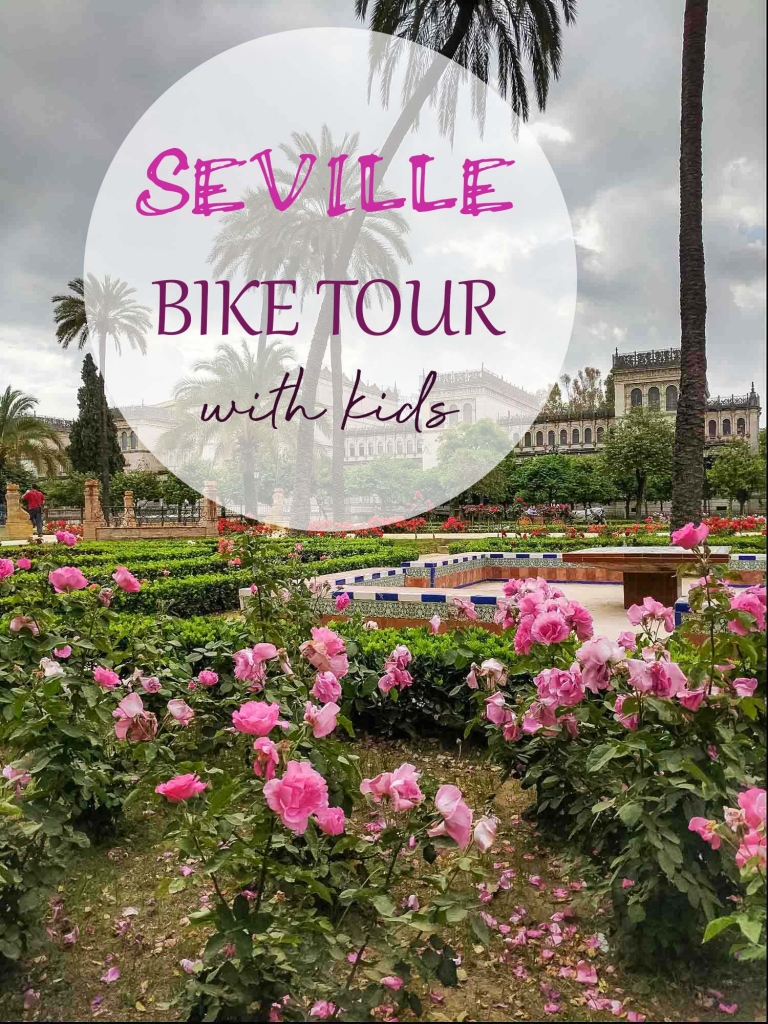 What else can you do in Seville?