Nestled into the sleepy hills of the North Yorkshire countryside lies the charming village of Rievaulx where there’s both Rievaulx Abbey and Rievaulx Terrace. One is owned by English Heritage and the other by National Trust. These places are distinctive and both have something unique to offer but what’s the difference between the two? What do you get for your money and which one should you visit if you have kids? We answer these questions for you. 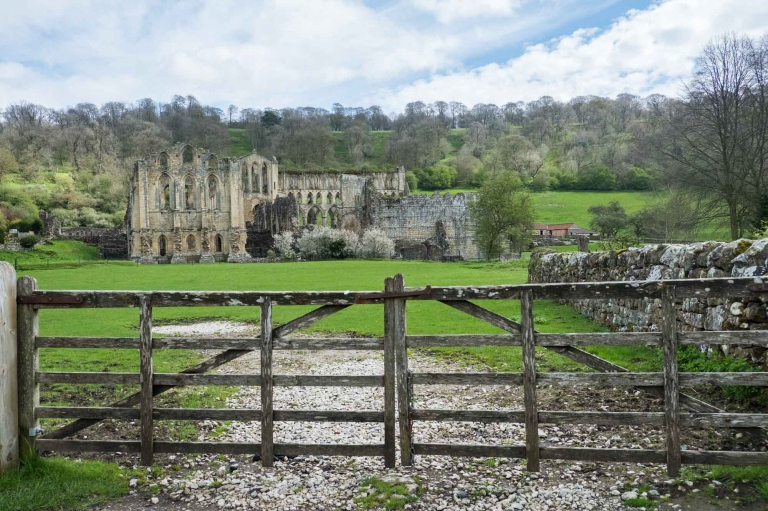 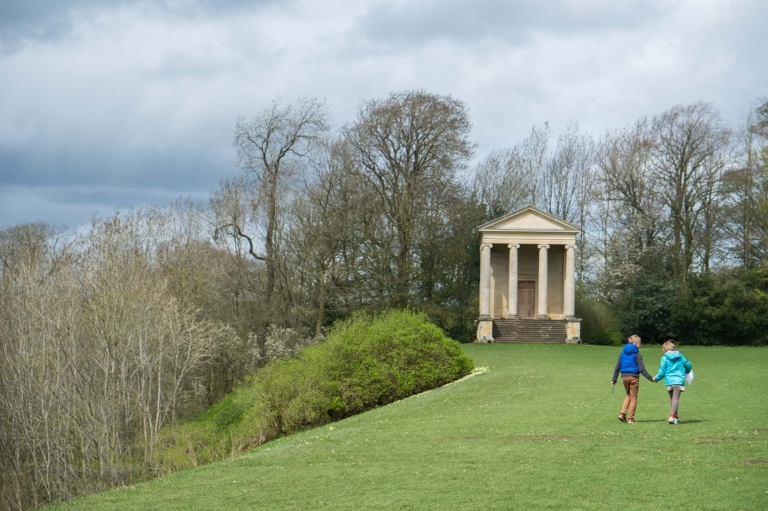 Rievaulx, which is pronounced ‘ree-voh’ is a tiny, valley hamlet within the North York Moors National Park in North Yorkshire. The population is deemed to be less than 100 people and the small number of remaining houses sit within what was the inner court of the Abbey.  The inner court of the monastery contained buildings such as the brew-house, bake-house, mill-house and guesthouse.

The green, rolling fields are fed by a river which keeps them lush and often over-saturated with water. When we visited wildflowers of spring and baby lambs littered the grass whilst splatterings of black clouds pushed through.

Springtime in Yorkshire can be particularly unpredictable with rain but we managed a few rays of sunshine. 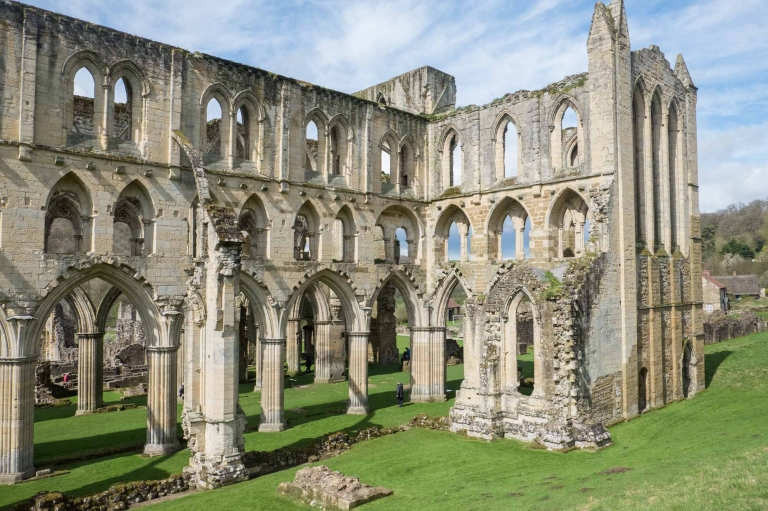 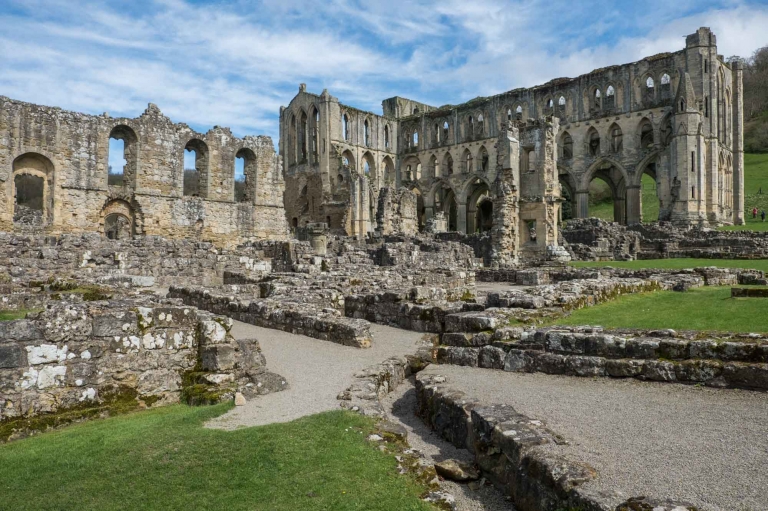 Rievaulx Abbey was the first Cistercian monastery in England, founded in 1132 by twelve monks from Clairvaux Abbey in north-eastern France. Its remote location was well suited to the order’s ideal of a strict life of prayer and self-sufficiency with little contact with the outside world. 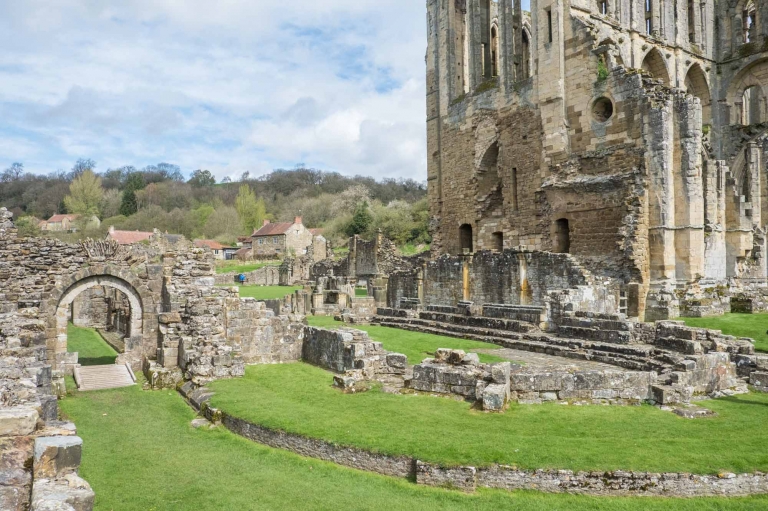 It was one of the greatest (largest) abbeys of England, consisting of 72 buildings and housing 640 monks and lay-man, until it was seized by Henry VIII in 1538 during the dissolution of the monasteries.

The grounds were bought by the Earl of Rutland who was keen to continue the iron-smelting industry which had been conducted by the monks. He established a charcoal-fired blast furnace and the associated structures and workings in what became Rievaulx village. This continued until its disruption during the Civil War, with production ceasing in 1647. 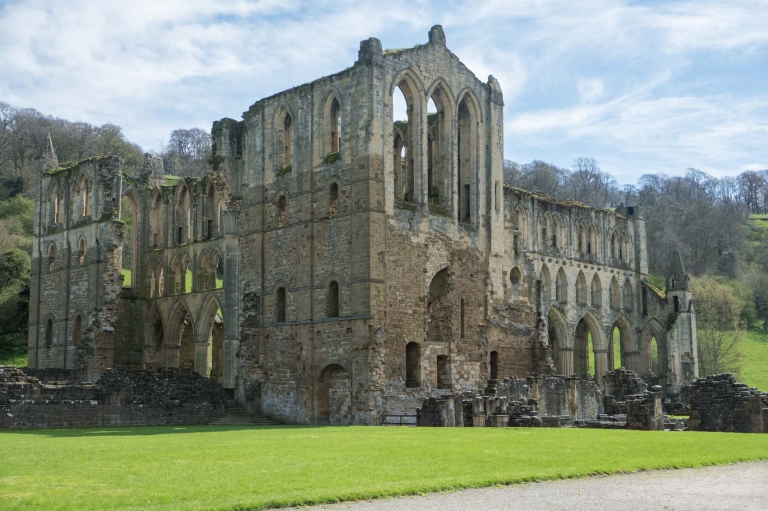 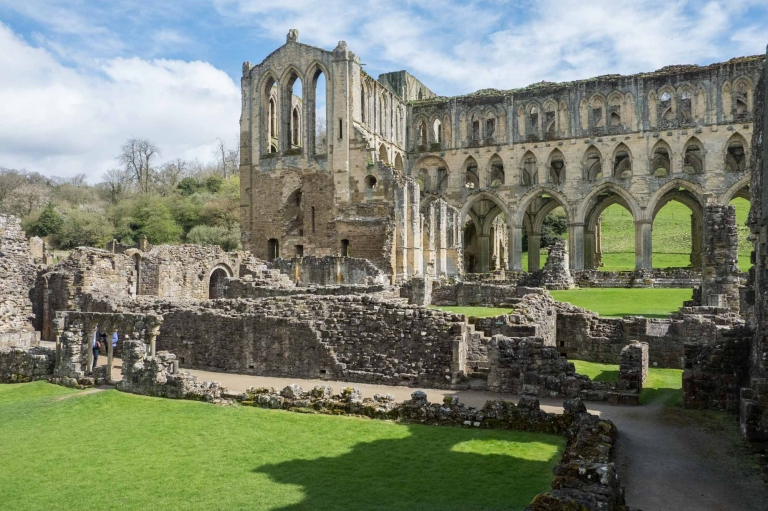 Rievaulx the growth of the village 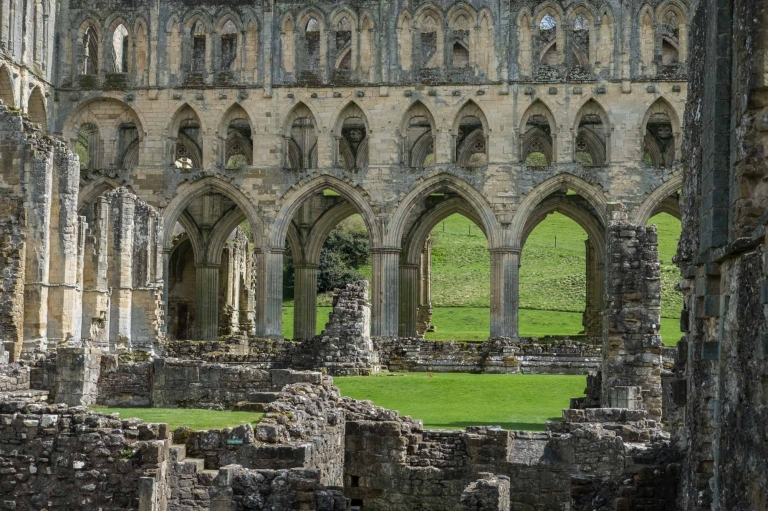 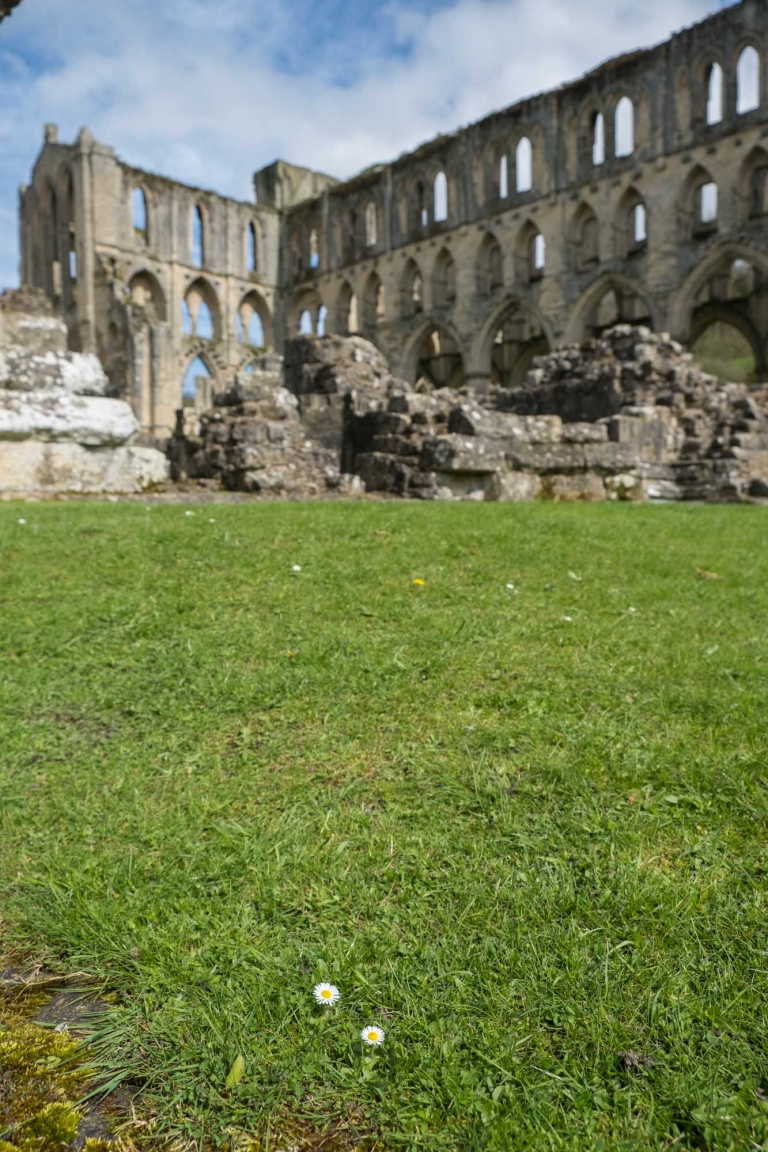 The grass-covered Rievaulx Terrace sits high and proud overlooking the valley and The Abbey and village below. The Terrace is on land that was, until the Dissolution of the Monasteries, owned by Rievaulx Abbey.

It was then granted to Thomas Manners, 1st Earl of Rutland and it passed from him to the 1st Duke of Buckingham,  Sir Charles Duncombe in 1687 and his nephew Thomas Duncombe in 1711.

The terrace was created in 1758 by Thomas Duncombe who had inherited it along with the adjoining Helmsley estate (now Duncombe Park). He sought to surpass the more formal terrace and temples laid out in about 1730 by his father at Duncombe Park House, a mile away. It is thought that he may have planned to join the two terraces by a scenic drive along the River Rye. Although this lengthy road never materialised. 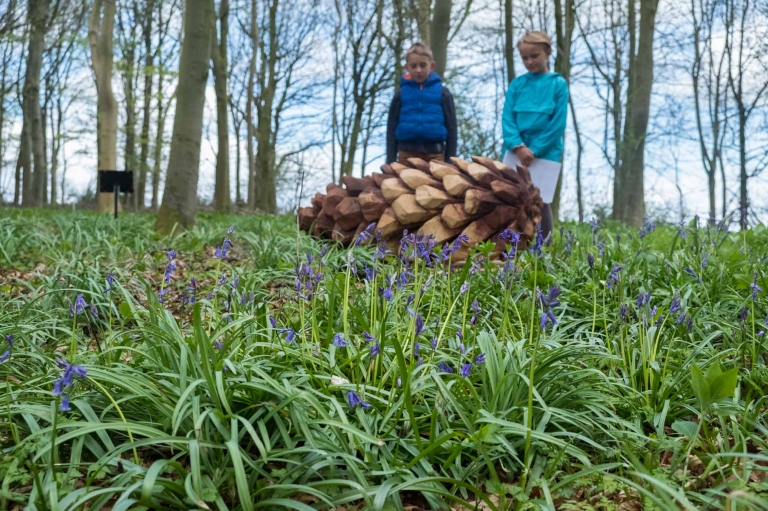 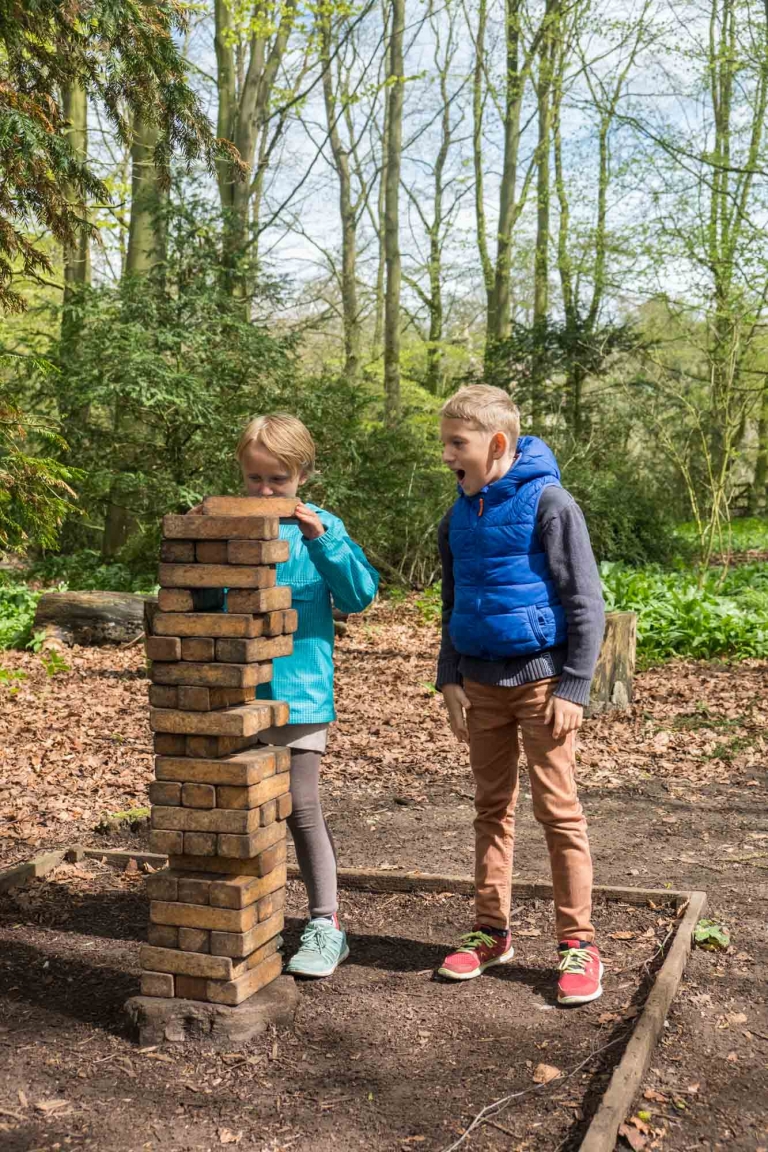 Two temples sit at opposite ends of the terrace. At the southeast end of the terrace is the domed Tuscan Temple, thought to be a scaled-down version of the mausoleum at Castle Howard a few miles away. The pavement floor came from the choir of Rievaulx Abbey. 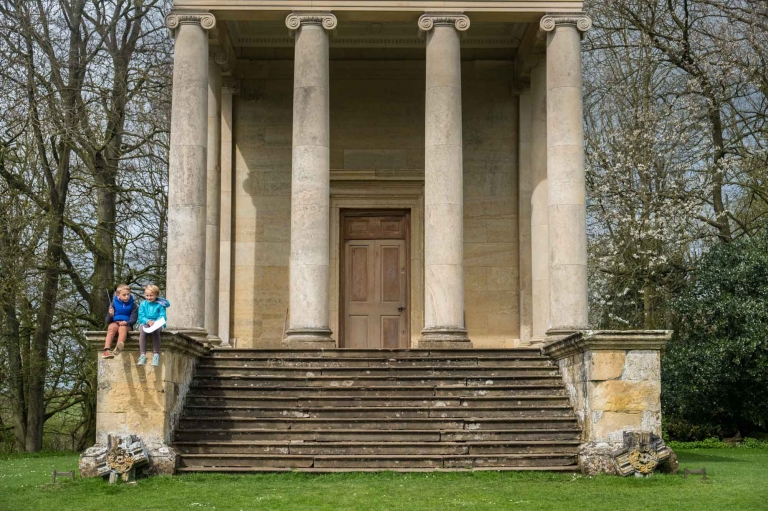 At the opposite end stands the Ionic Temple, inspired by the Temple of Fortuna Virilis in Rome. It was intended as a banqueting house and the central table is still set for a meal. It is decorated with elaborate ceiling paintings and is furnished in the period style. The basement housed the kitchen and living quarters and nowadays it holds an exhibition on the history of The Terrace.

Duncombe’s descendant, the third and last Earl of Feversham, died in 1963 and in 1972 the site and the adjoining woods were purchased by the National Trust. 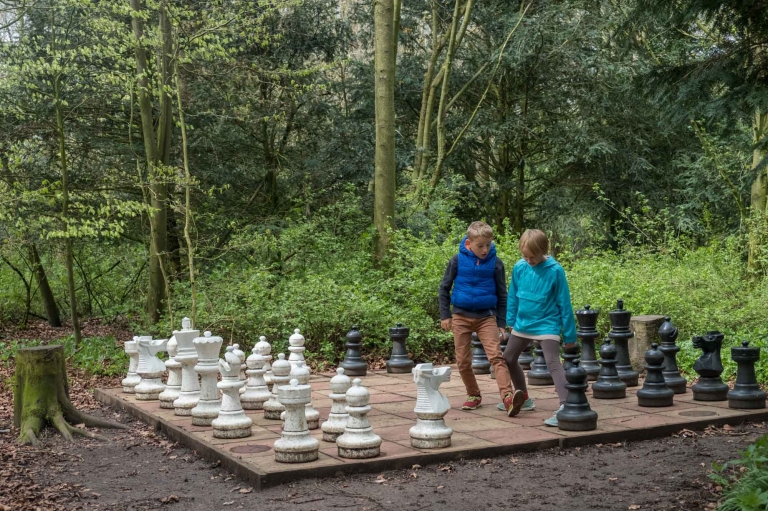 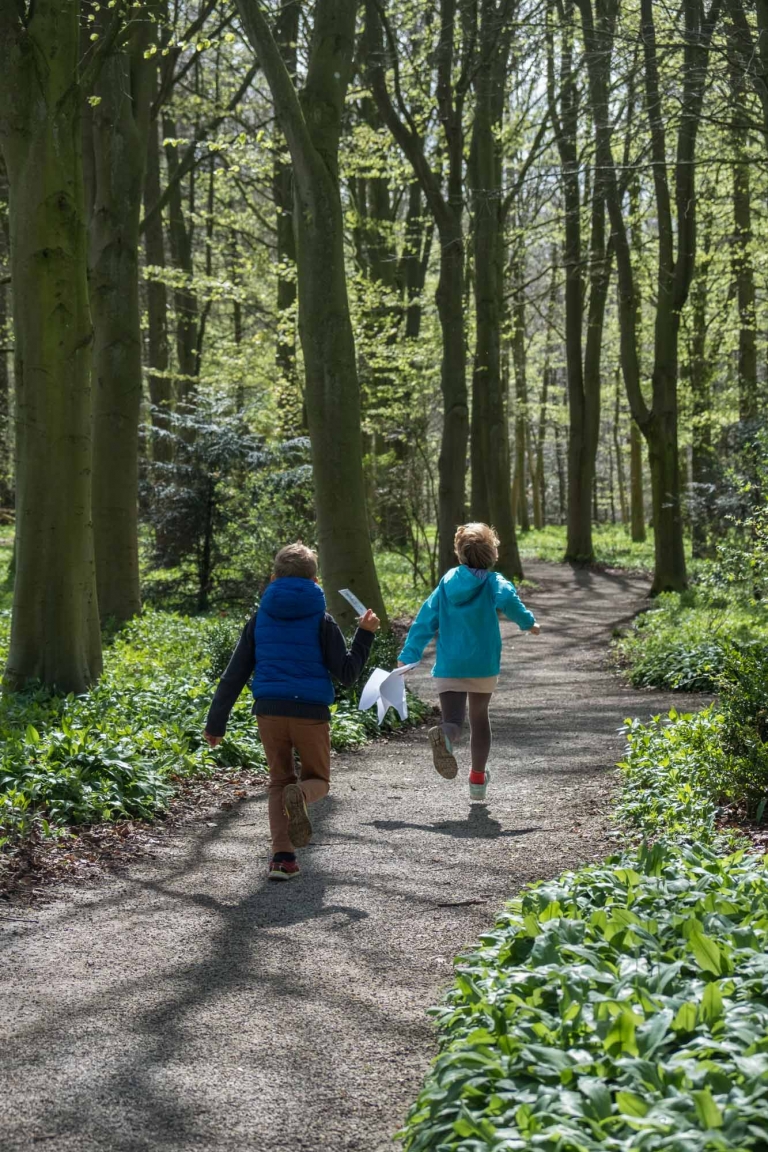 A Comparison Between The Two 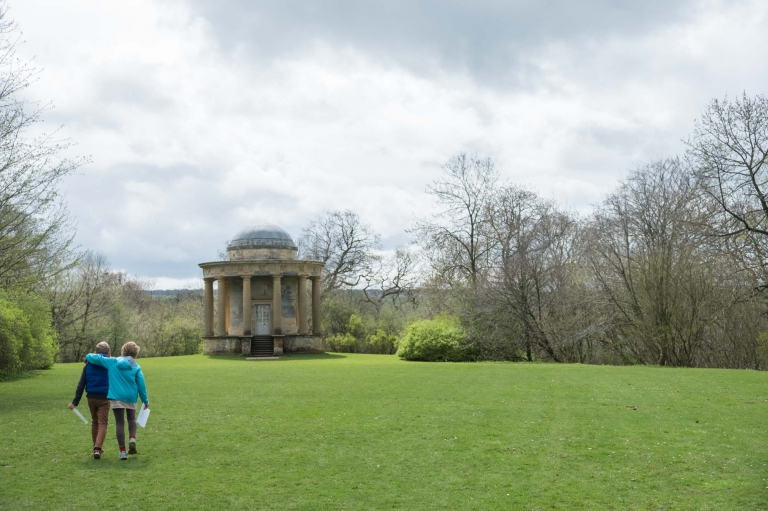 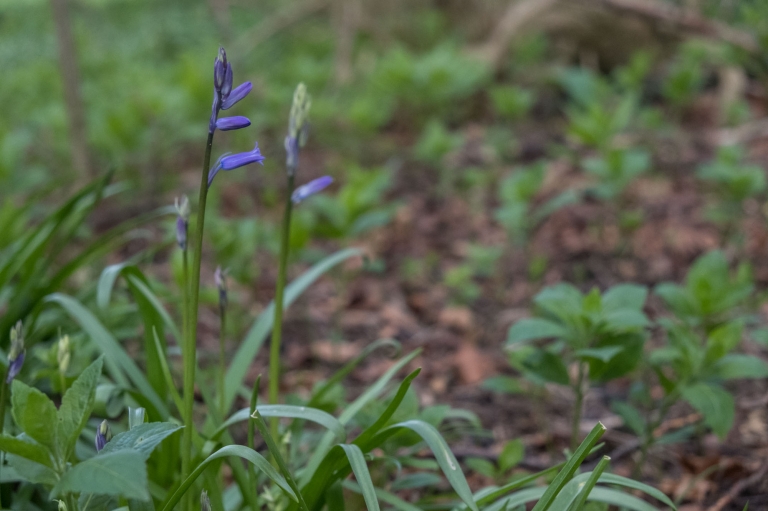 Which one is best for kids?

The Abbey is very formal. It’s great for learning about English history and the history of the site and buildings. Kids can explore the site and climb on, in and through the ruins. There was once 72 buildings on this site, the architecture is grand and imposing and there’s a lot to see.

The area is sat on a huge expanse of green land and kids are encouraged to go off and explore although there are sheer drops (less than 2m high) and water.

The listening devices are a great idea and although there are signs around The Abbey, our kids seem to learn much more by listening on those devices.

If you’re vegan/plant-based there is only one dish you can eat in the restaurant and that is soup. It was warming and tasteful but at £4.95 per bowl it wasn’t cheap. 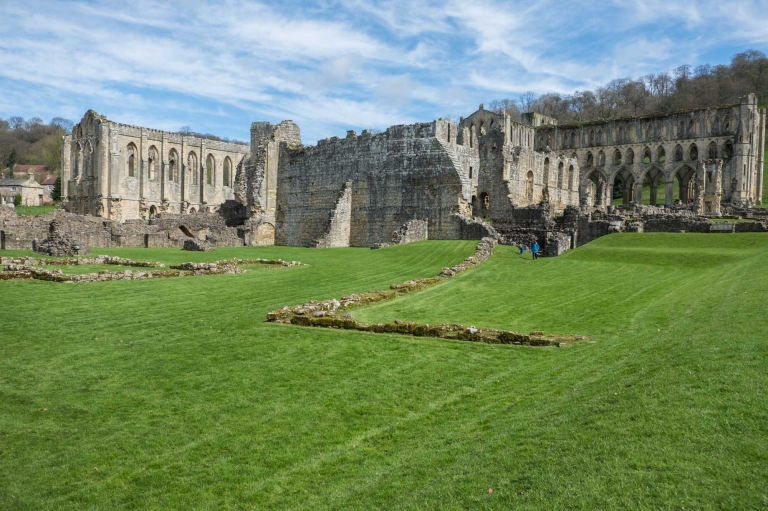 The temples are at opposite ends of a long terrace, I would estimate about 500m apart. I wouldn’t say the temples are of particular interest for kids but there’s a giant horse overlooking The Abbey and they can run around happily on the grass. 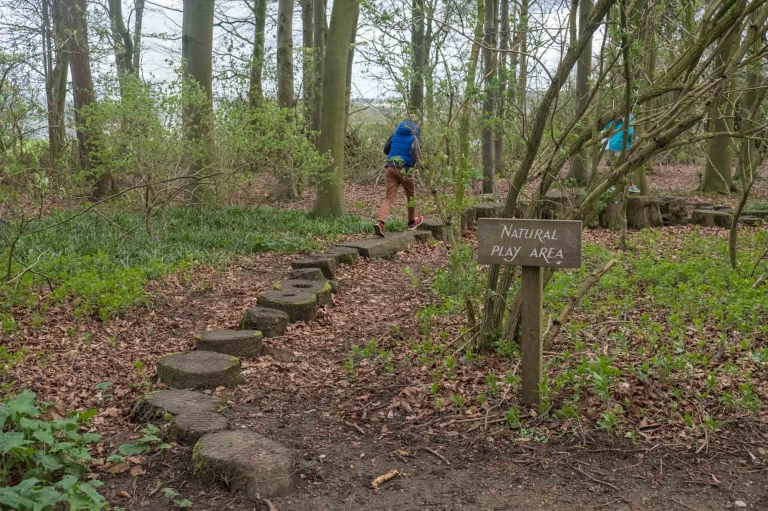 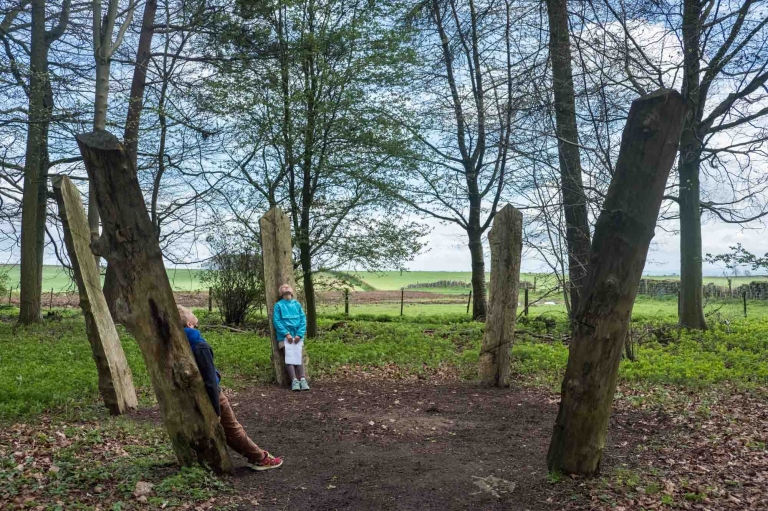 The view from the terrace which has panoramic views overlooking The Abbey and the valley is spectacular. The horse is pretty good too! 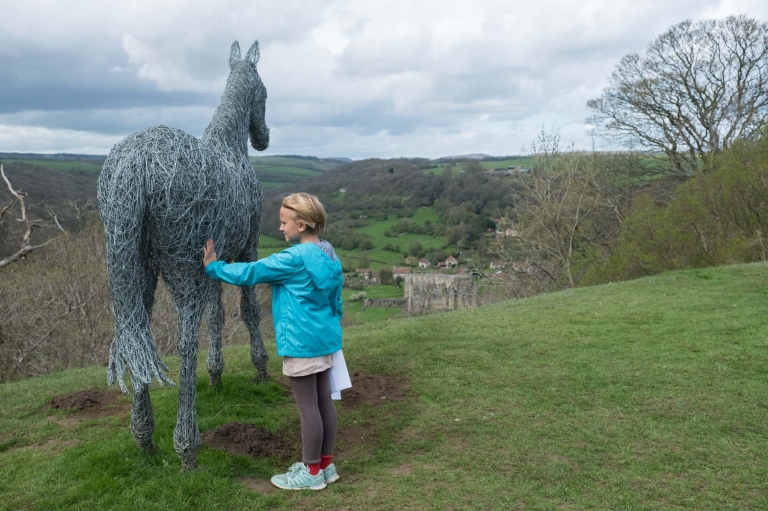 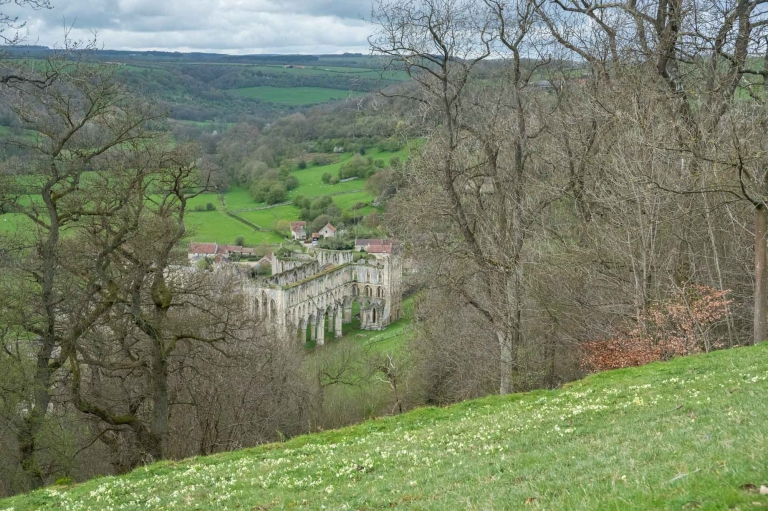 The Abbey from The Terrace

Photos from The Terrace

It is maybe a little unfair to compare The Abbey and The Terrace given they are so different.  Without the outdoor games, The Terrace would be very boring for kids and without the listening devices the history of The Abbey would be far duller.

Each of these places has its own merits but without doubt, The Terrace is more fun for kids however both are definitely worth visiting – if you can! 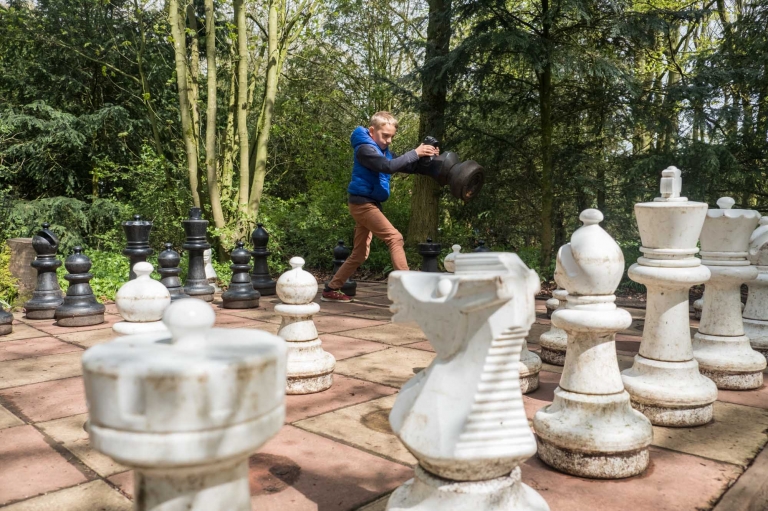 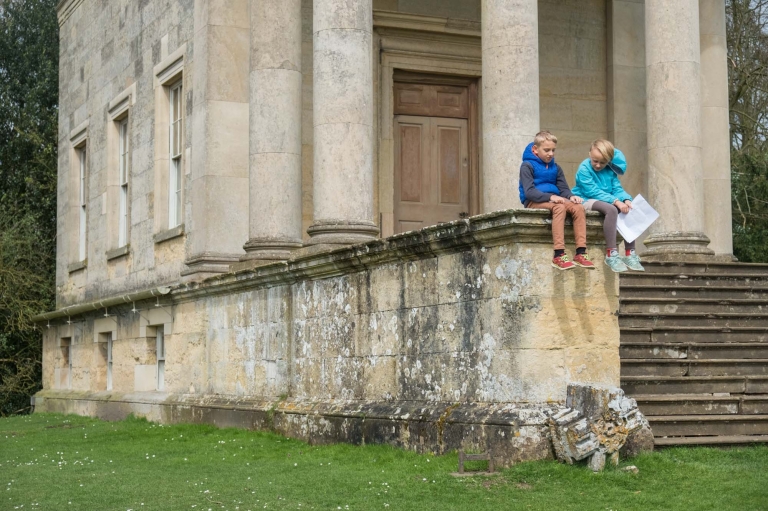 Sitting on the temple 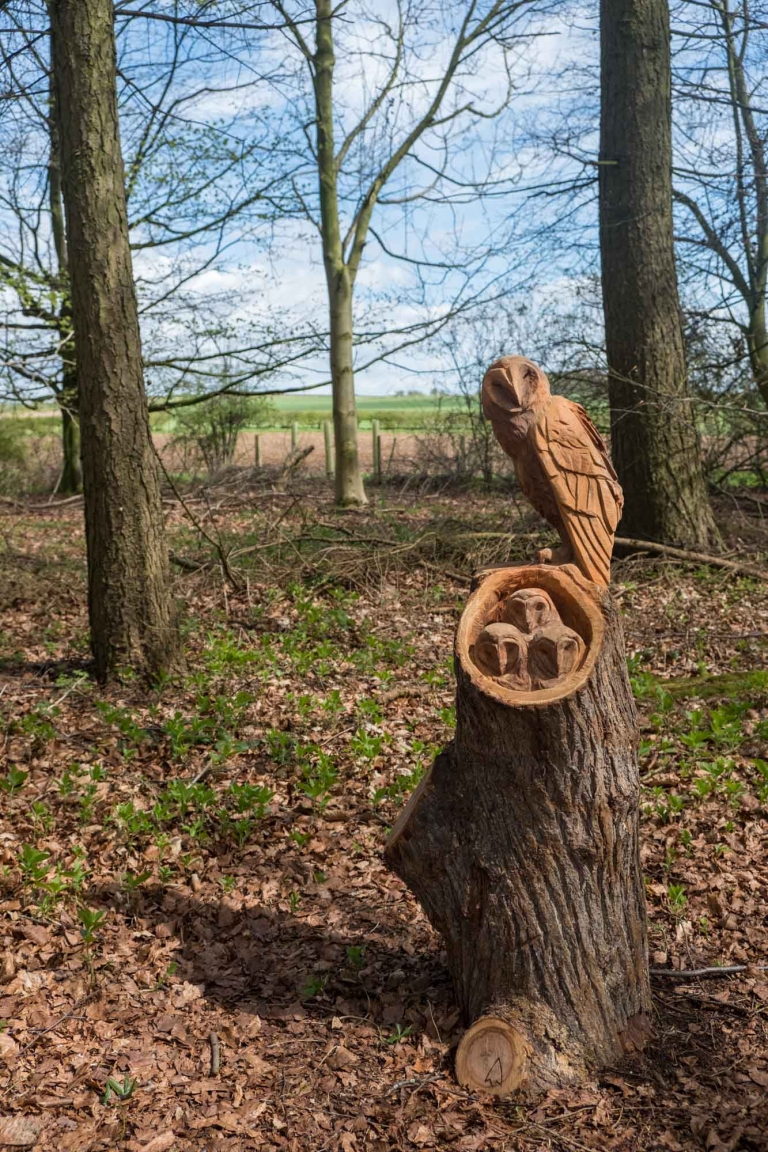 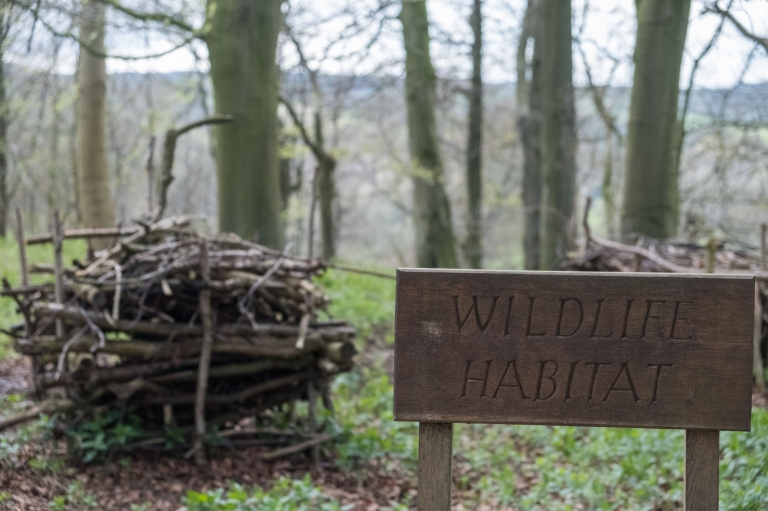 Search For Local Cottages You Can Stay In

Can You Pin This, Please?

Spread the love
2
Shares
2
Shares
Posted in UK
« Which beach on Siargao?
Brasov: How to see it from the sky »