Why Kids Will Love Panama Canal

Did you know that The Panama Canal is one of the 7 Industrial Wonders of the World? It connects the Pacific Ocean to the Atlantic Ocean and saves ships a journey of 12,900km. This post is all about our visit to and why we think kids will love Panama Canal.

What exactly is the Panama Canal

The Panama Canal is one of the seven industrial wonders of the world and it’s the second we’ve visited. Hiking to the Hoover Dam was my first but it wasn’t any less impressive. (On a side note Rich tells me we’ve actually seen four; the flagpole from The Great Eastern boat sits outside Anfield FC in Liverpool and Rich has seen the Brooklyn Bridge although the kids and I haven’t).

The Panama Canal is an artificial 82 km long waterway in Panama that connects the Atlantic Ocean with the Pacific Ocean. It cuts across the Isthmus of Panama and enables ships to pass through the America’s without having to brave the long trip around the Cape Horn.

It incorporates a series of deep artificial lakes surrounded by an abundance of green rainforest and three sections of locks. In essence it looks quite natural and is contained by a large amount of wildlife which seems to be thriving.

The Panama Canal has a gruesome history

The construction of the canal was far from an easy affair. It took thirty-four years to complete and started with the French in 1881.

The project however was a disaster and due to poor planning and tropical disease, which is estimated to have killed around forty people per day (just over thirty thousand in total), the project was abandonned and declared bankrupt.

The US took over the project in 1901 and due to Colonoal William Gorgas making the connection between mosquitoes and diseases such as malaria and yellow fever, the building of the canal continued succesfully to its opening in 1913.

How does the Panama Canal work?

Unlike a traditional canal you may have seen or heard about in the UK, Panama Canal is slightly different as the water does not flow through the gates but through channels under the water. You don’t want to fall in there!

In 2016, Panama officially opened it’s Expansion Locks. These wider lanes allow the enormous ‘neo-Panamax’ ships (ginormous vessels) to transit the canal. They also allow smaller ships to pass in opposite directions simultaneously. Prior to this, traffic was one-way only, switching direction around late-morning.

Though its two seperate lanes of canals make it look like the ships can travel in both directions at the same time, the Culebra Cut actually makes this impossible.

The Culebra Cut is a treacherous area and far too narrow for large ships to pass each other. This means that for twelves hours a day ships pass from north to south and for the other twelve hours they pass from south to north.

Panama Canal is also the only canal in the world where the Captain is required to yield control of the ship while it’s transiting. He passes control over to the locks and trained personnel guide the boats carefully through the locks.

Watching the ships pass through the Panama Canal

Some of these ships are so wide that only a few inches separate them from the concrete sides of the locks. Others are small enough that more than one can fit at a time. In either case it’s vitally important to protect the locks from accidental damage, so pleasure boats and small fishing boats usually transit next to a canal tug boat and they just get tied to the tug boat as they go.

The visitor centre showcases the canal’s history and mechanics through various displays and exhibits over four floors! It’s big so make sure you allow enough time to visit it all. Our kids had a blast in here and didn’t want to leave.

The four floors are:

Even if you’re not normally into history there’s a lot of cool stuff here with historic pieces, models of ships and construction equipment, a navigation simulator, video presentations, a topographical model of the Panama Canal and objects used in Canal operations. It’s really hands on and encourages you to learn through doing.

My children’s favourite is the simulator on the third floor which allows them to navigate their way through the locks but they also loved opening the locks and touching the chains.

Kids can learn hands-on in the Panama Canal visitor centre, spread out over four floors! Click To Tweet

Facts for kids about the Panama Canal

Info about visiting the Miraflores Lock

When to visit: You need to be there before 8am if you want to watch the ships passing through. It is a spectacular sight although it isn’t the quickest process and younger kids might get bored. The viewing deck is really big though and there’s plenty of space for them to do other things.

Other locks you could visit

Pedro Miguel does not have a visitors centre but you can drive here alone and get a good view of the ships passing from the car park. Obviously the beauty of visiting here is it’s completely free and it is about a ten minute drive from Miraflores.

The Gatun locks are an hour north of Panama in the car, however you can catch the Panama Canal Railway to Colon (Monday to Friday only). The trip is only an hour and takes you along a picturesque journey along the canal. Book a taxi beforehand to collect you from the train station and drive the 10 minutes to Gatun Locks.

The Aqua Clara Visitor Centre provides a viewing platform which is literally so close you can almost reach out to touch the vessels inching past. You can also walk and drive across the entrance to the locks here which is a great photo opportunity.

The three larger locks built as part of the expansion project in 2015 can be found adjacent to Pedro Miguel Locks. There are no visitor facilities yet but they will be built at some point.

Tours around the Panama Canal that kids will love

If you wanted to encorporate some time on the water as well as visit the locks, you could go on a tour.

This viator tour allows you to travel between the Atlantic and Pacific Oceans during an 8-hour tour of the Panama Canal. You’ll explore the canal by sea and on foot, viewing the ships passing through the locks and the variety of plant and animal life on the canal’s shores as well as explore Gatun Lake and Monkey Island, home to howlers, capuchins and tamarins (monkeys). Read more about Ocean to Ocean Panama Canal and Jungle Tour .

Come visit the Panama Canal. It's one of the industrial wonders of the world. Click To Tweet 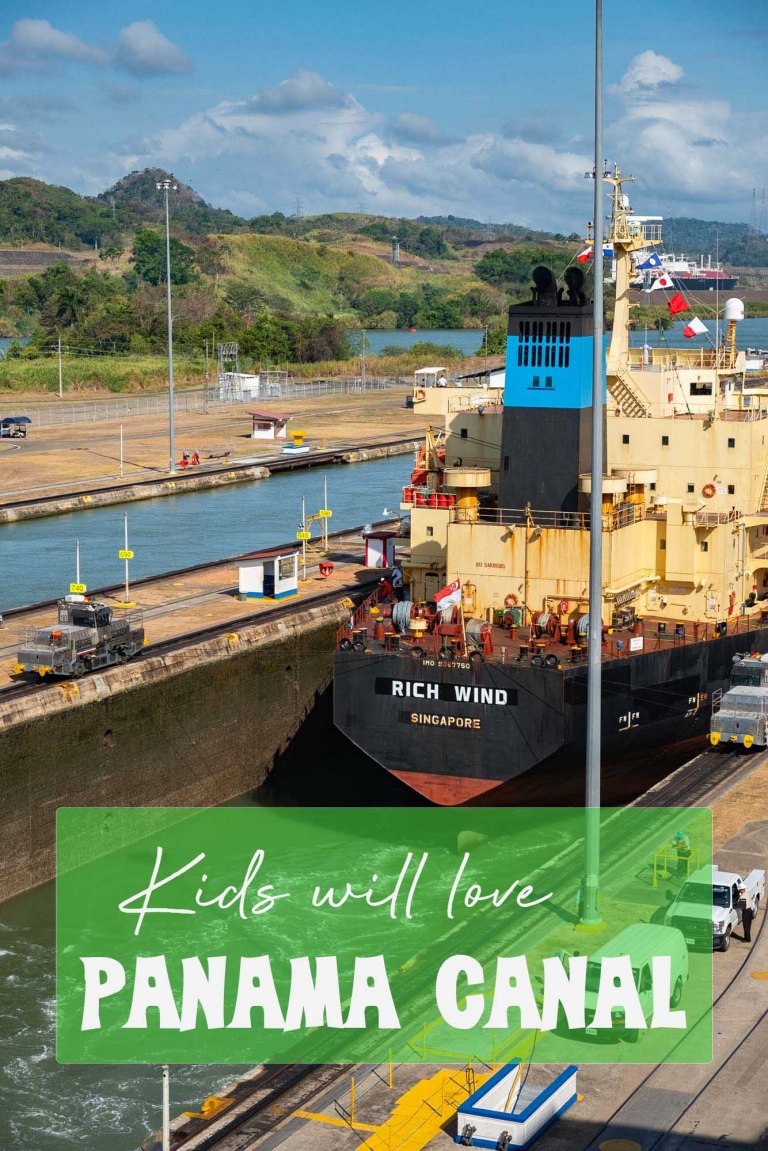 What else could you do in Central America?

We spent nearly four months around Central America. Have a look and see if there’s anything that inspires you.

Spread the love
2
Shares
2
Shares
Posted in Central America, Panama
« Seville Bike Tour: The best way to see Seville
Online Banks For Nomads & Why You Can Never Have Too Many »