Rescuing kittens in Marrakech. Everything you need to know about SPANA

Marrakech’s streets are overflowing with stray dogs and cats, both dead and alive. Not to mention the awfully abused working donkeys, mules and horses but that’s for an entirely separate blog post!

Human rights in Morocco are particularly poor so it is of little consolation or surprise that animal rights are low down the pecking order! Working animals are seen as mere machines – such a far cry from our own experiences of pampered ponies and gymkhanas. 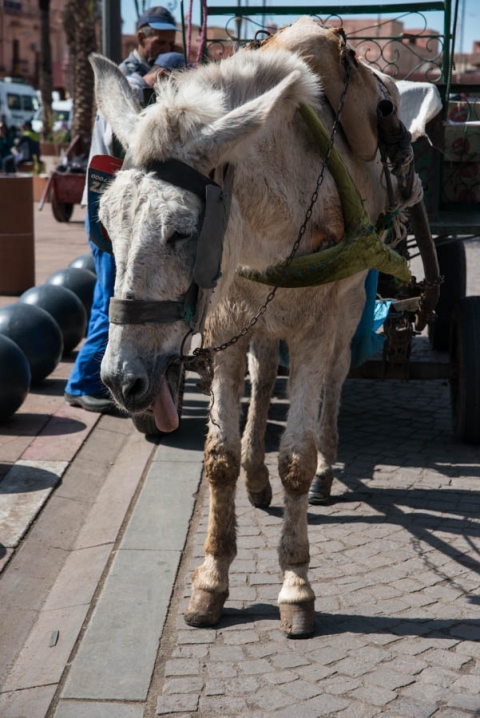 A dehydrated working donkey with open sores on its body.

The greatness of a nation and its moral progress can be judged by the way its animals are treated.

It is with a little relief to see that some cats, especially those that are able to stay near butchers, are fed (small) meat scraps regularly. A few cats are able to survive well but most look like mangy, bedraggled, skeletal flea pits, that eat out of bins, drink water from dirty puddles and are generally abused by the local children.

Of everything we’ve seen in Morocco, and there’s been a lot, the suffering of animals has been the worst. 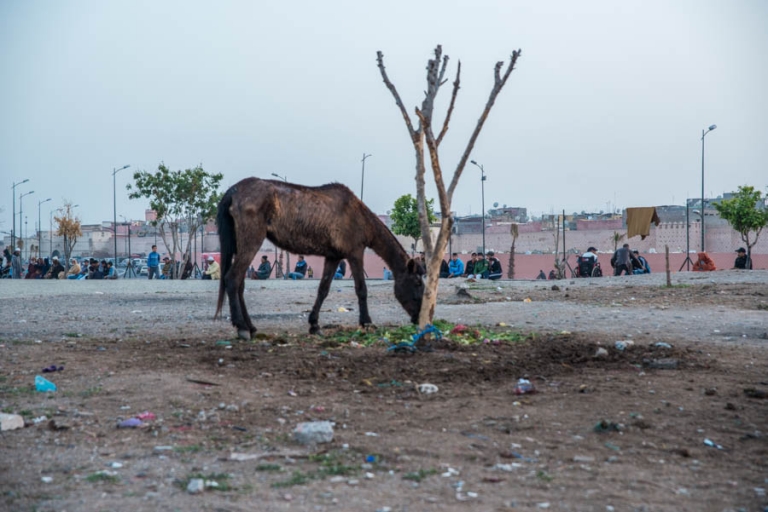 We came across a tiny little kitten in our neighbourhood that was harassed by the local kids. She was picked up, thrown and chased by the children. The bigger cats would hiss at her and she spent most of her time trying to hide behind and on tyres.

After three days, she came close enough to allow us to pick her up and take her back to our apartment. She was dirty, terribly thin, had a snotty nose, kept sneezing and one eye was gummed up.  She was utterly terrified of us and hid in the corner. Gingerly she licked at some porridge (the only food we had) and watched us from afar, not even allowing us to touch her. 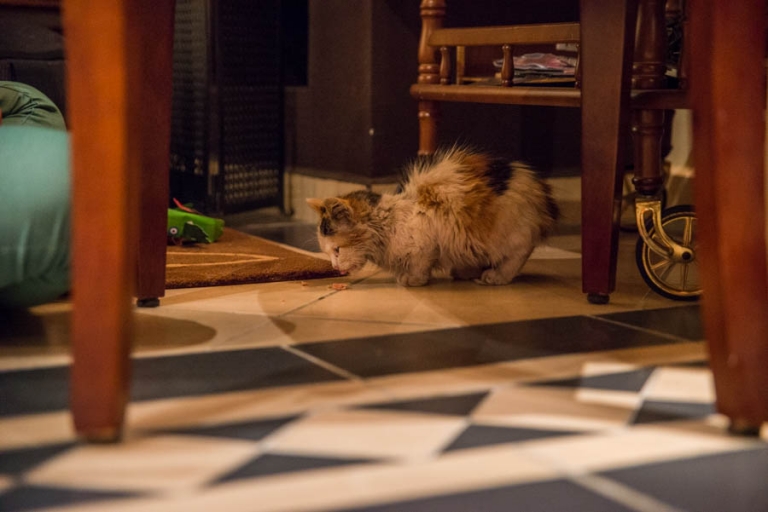 Whisky hiding in the corner.

Making her a bed

So small and ill, we made her a soft bed in a drawer and she slept for over twelve hours. I really thought she was going to die but the next day she ate some yoghurt (we thought we’d bought milk) and a small piece of tuna. 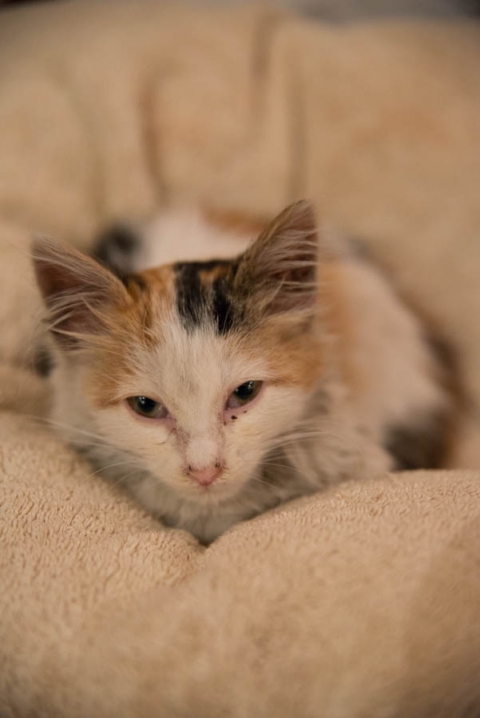 Whisky dozing in her bed. 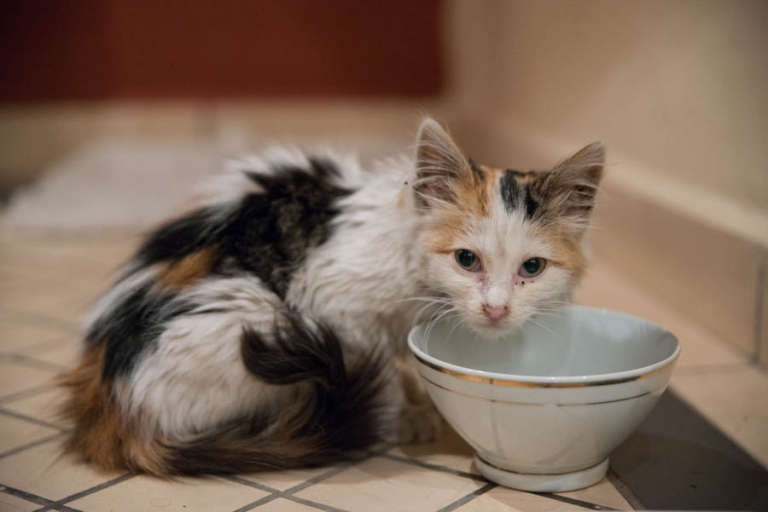 Finally drinking some water in the smallest bowl we could find.

By day three, she was eating tuna, yoghurt and cat biscuits as well as drinking water and toileting in the shower. We put down a plastic bag covered in toilet paper and she did her business on there. What an awesome kitty!! She made huge progress and would even come to us for strokes. She wouldn’t let us pick her up yet but we were making progress. 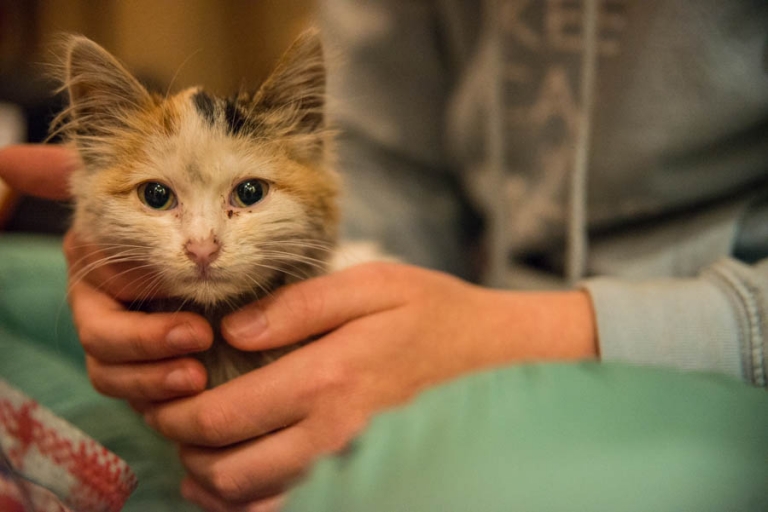 Having cuddles with Sophie

Now we faced with the dilemma of what to do with her. We couldn’t take her with us and we wouldn’t put her back on the streets so we hit google trying to find a rescue centre. Here’s what we discovered.

After much deliberation we named her Whiskers! Isn’t she a beauty!? 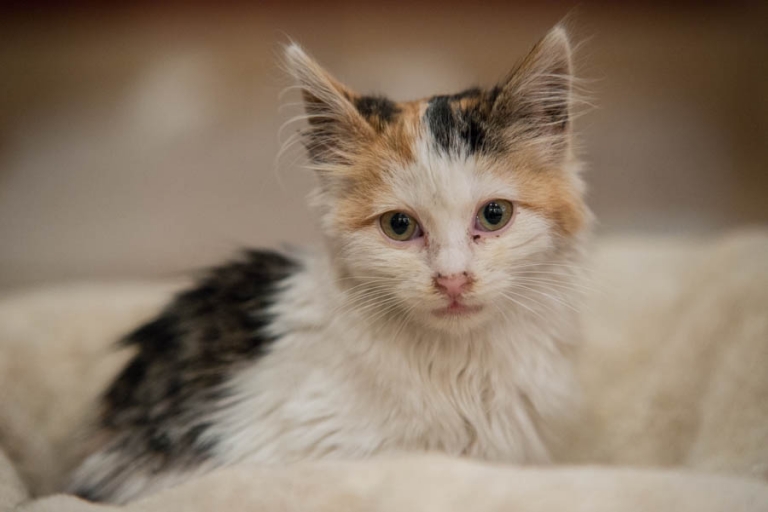 Regular cleaning of her eye meant that it opened up and, although she still sneezed a bit, we decided to give her a quick, warm bath. Even washing the kids’ feet doesn’t leave the water that brown – poor little Whiskers. Eventually she forgave me. 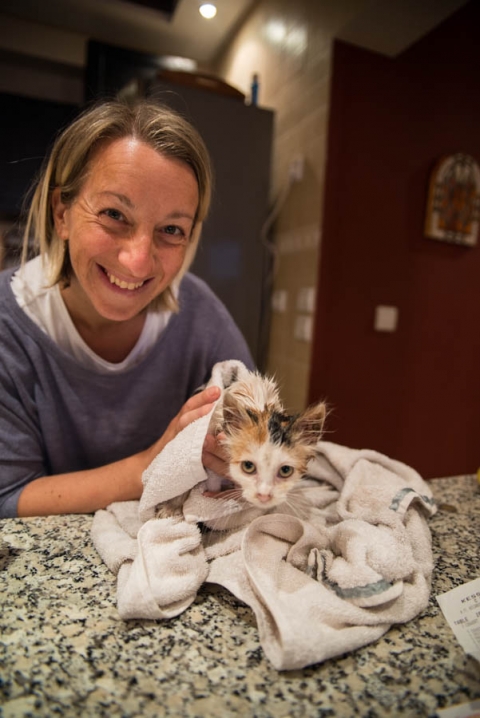 We gave her a bath, boy was that water brown! 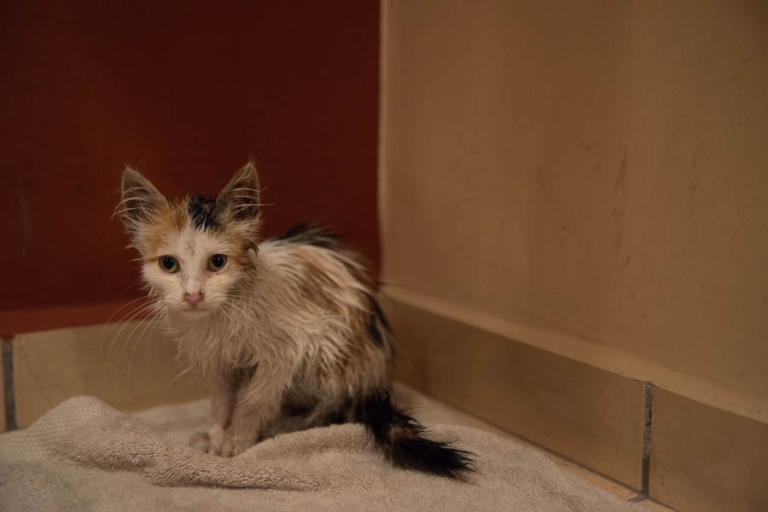 She did forgive me eventually!

I wasn’t going to hand our kitty over to just anybody so first I set about doing some research.

The first article I came across was from Horse & Hound who in 2014 voted to have SPANA as their chairty of the year. The journalist, Sophia Heath, spent three days accompanying SPANA’s director seeing how they can improve the lives of working equines in Morocco.

I also found a number of reviews on TripAdvisor and Facebook as well as a few other articles.

Now we had a recommendation from Susan at Jarjeer.Org and some research under our belt, I felt more relieved and decided we should pop along for an impromptu visit. 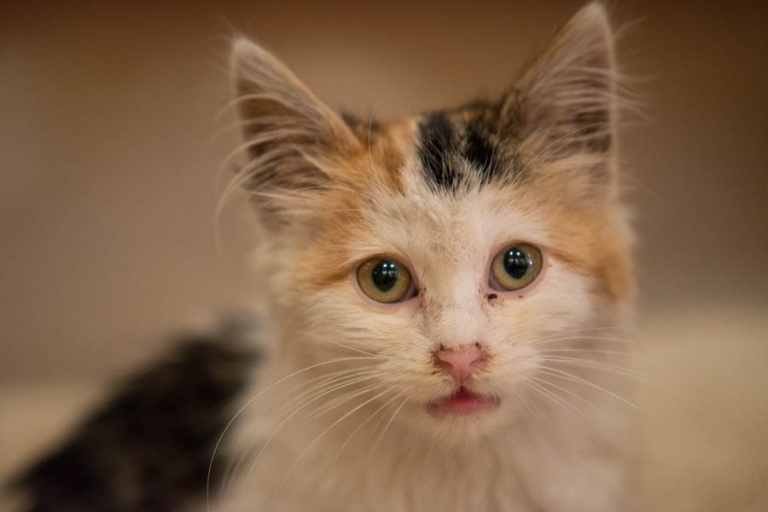 Much to my surprise I grew very attached to little Whiskers.

SPANA was a 40 minute walk from our apartment, so in typical British style of walking in the midday sun we left just after lunch and brazed the dry, dusty pavements.  There was some method in our madness though, morning clinic runs from 9am to 12pm and sterilisations from 1pm to 4pm. 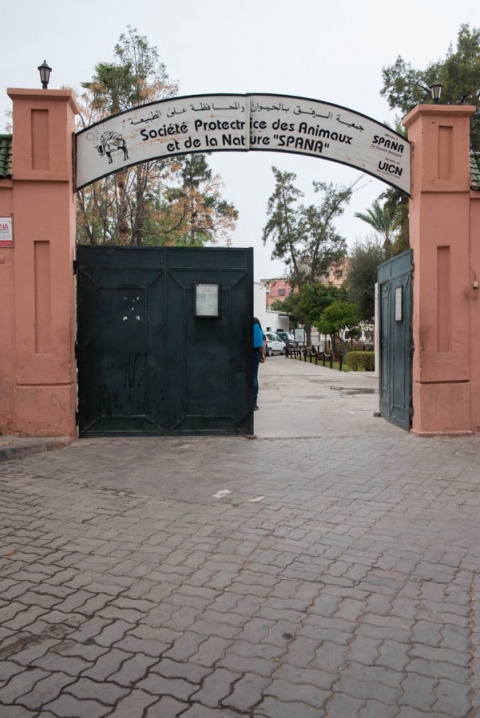 Morning clinic is very busy receiving over THIRTY working animals in three hours and I wanted to arrive after that but before their afternoon clinic. 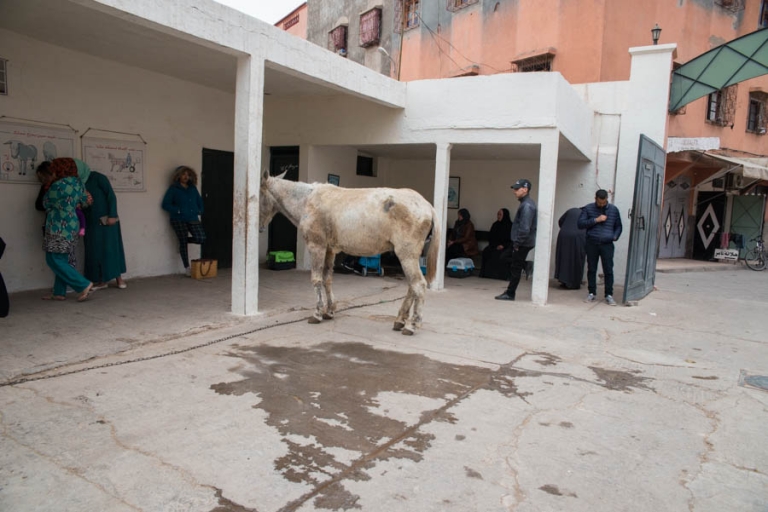 People waiting for the afternoon session outside SPANA.

If you decide to walk here from Marrakech you will need a bottle of water and it’s a good idea to cover up with a light cardigan or shawl (if you’re female).  I’m guessing this area is low down the socio-economic ladder which would explain men’s behaviour towards my daughter and I walking alone.

Alternatively a taxi from the Medina would cost about 60-100 dinar and save you from the constant harassment.

What do they do?

SPANA is actually a British charity that works to improve the lives of working animals in poorer countries.

The centre in Marrakech provides free veterinary care to those working owners who are not able to afford it. It also provides education programs to owners and children on how to care and respect animals. Offering a mobile clinic, this branch visit a weekly market 40km south of Marrakech to re-shoe and dress wounds on working mules, horses and donkeys.

SPANA’s adoption centre is heaving with dogs, puppies, cats and kittens all waiting for new, loving homes. They are desperate for money and volunteers. 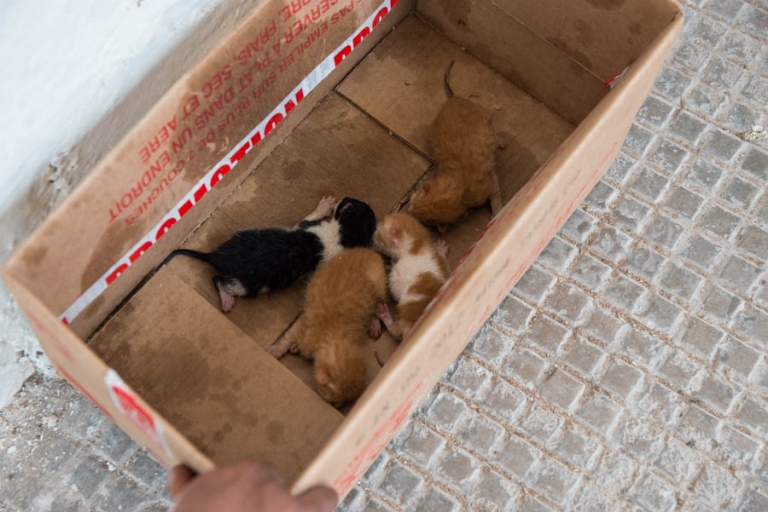 Kittens in a box left at SPANA.

What did we see?

What we saw both enlightened me and worried me. The animals were clearly looked after; they had big cages and stalls, shade and water but everything was so basic and dusty.

In the dog area there were large cages full of puppies ready for re-homing as well as a hospital section for those that needed medical attention.

The first thing that hits you is the noise these pups and dogs make. They can see you coming and they BARK. They’re immensely cute but I think the reality is they won’t get re-homed. 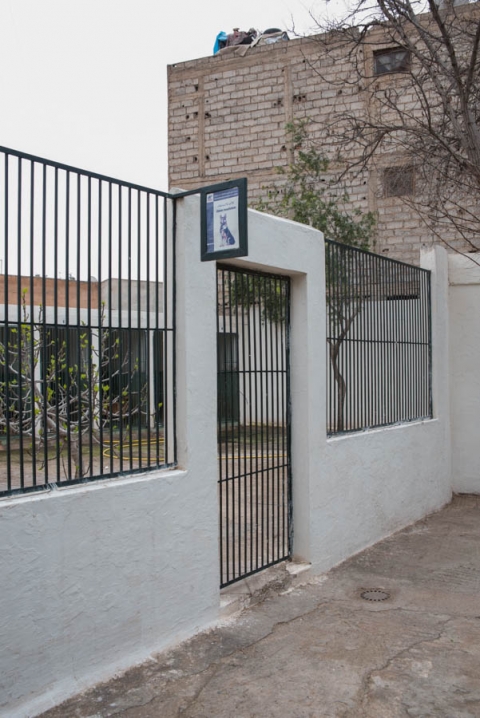 The dog hospital area at SPANA 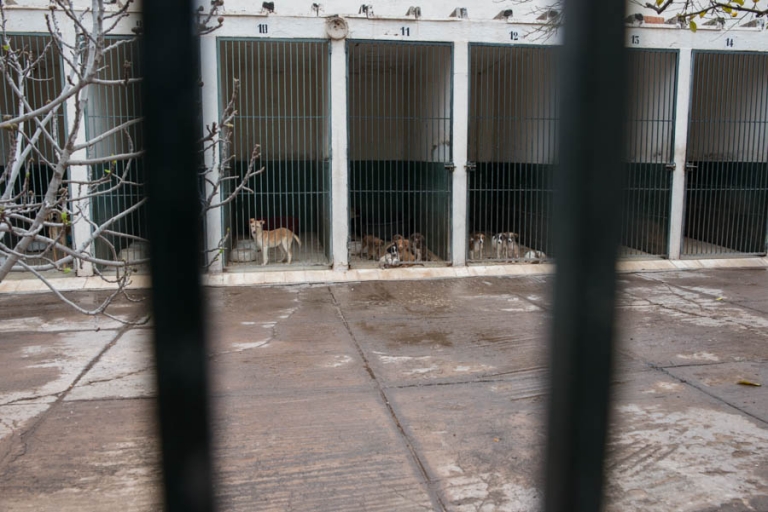 The cats were divided into those that were fit and well in one section and those cared for in the hospital. Many in the hospital were young kittens who suffered from diarrhea and you could see it on their fur.  Many of the cats were also incredibly dirty.

The cats had plenty of shade and things to climb and play with but it’s such a far cry from the comfort of the adoption centres that I’ve been to in the UK. 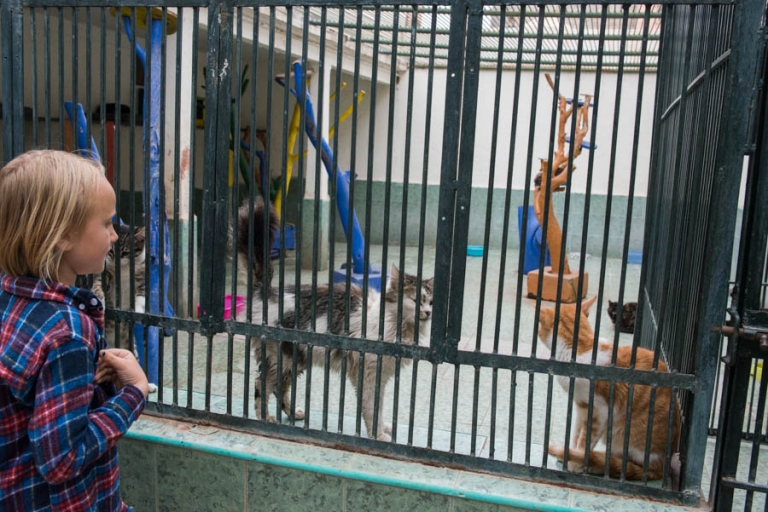 Dirty cats in the cat area

There’s an outdoor section for donkeys who are recovering from surgery, illness or maltreatment.  We saw one with huge wounds on his backside where his harness had rubbed. Many had open wounds from harnesses. 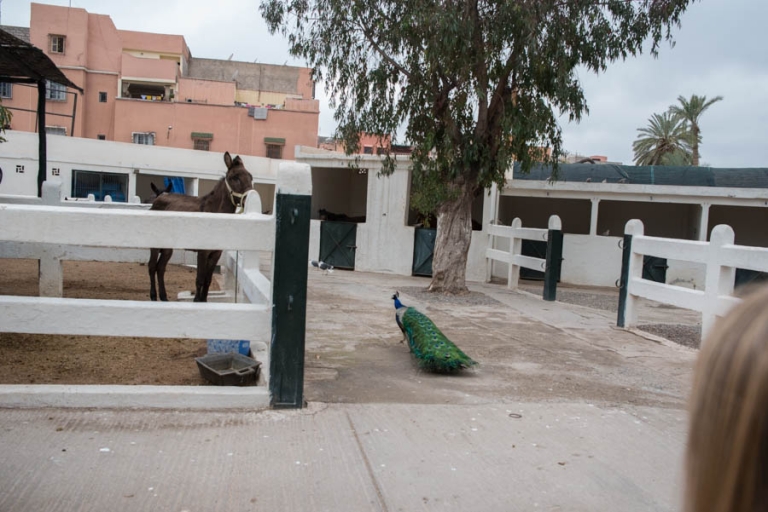 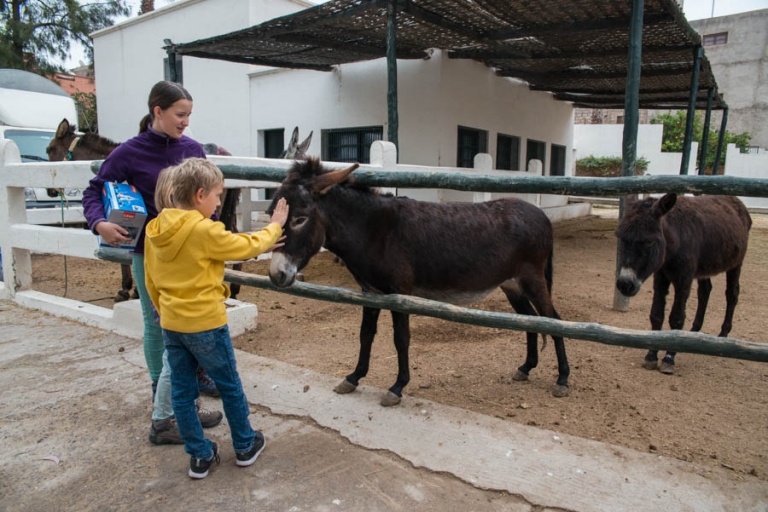 Stroking the donkeys at SPANA 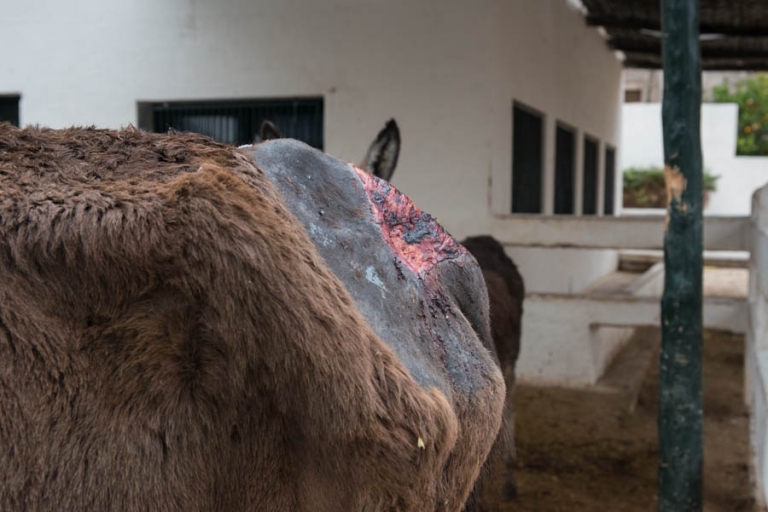 A donkey recovering from surgery at SPANA

One of the horses in particular did not like people and had some sort of wound to him. I’m relatively confident we could say he’d been abused. He was very timid and reticent. He was going to need a lot of TLC to regain his trust in people again, if ever.

Another horse had been involved in a road collision – of little surprise given the chaos of the roads there. 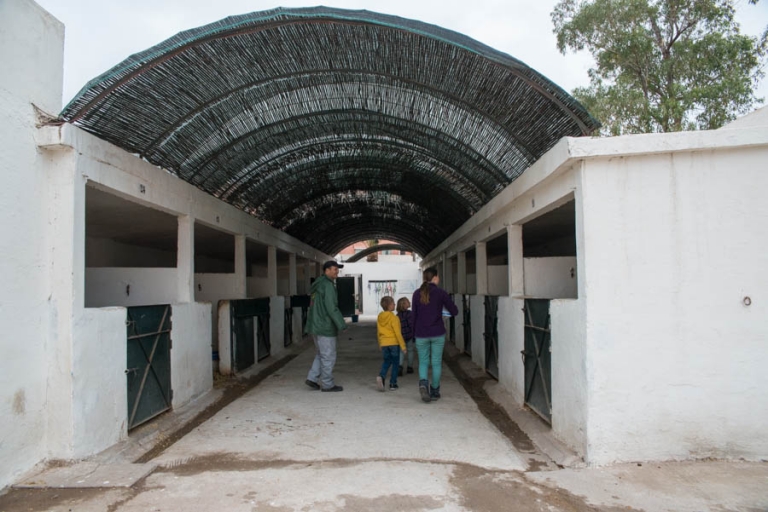 The horse stalls at SPANA

Whilst we were having our tour around SPANA, we came across a British team of vets and veterinary assistants who were performing surgery on a horse’s eye. They were staying in Marrakech and working for a three week stint.

We met Wendy, a British vet from Salisbury, who was inspirational in her approach towards my eldest daughter who also wants to be a vet. She provided us with some amazingly good and practical advice, which has since, really resonated with our eldest and she has been able to map out potential career stones.

It is occasions like this that humble and inspire us.  Meeting Wendy was a pivotal point in our trip and Sophie, our daughter, has referenced her on many occasions since.  You can never underestimate what friendliness can do. Always be nice.

A big, big thank you to Wendy and good luck with your move 🙂 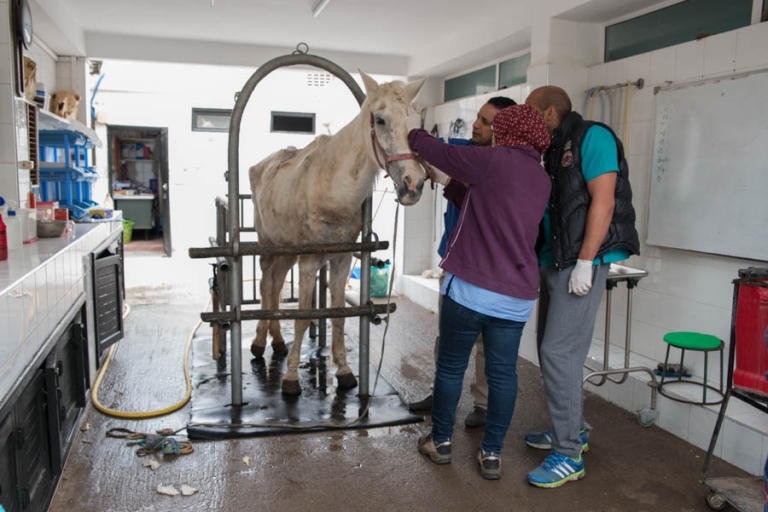 The British veterinary team at SPANA 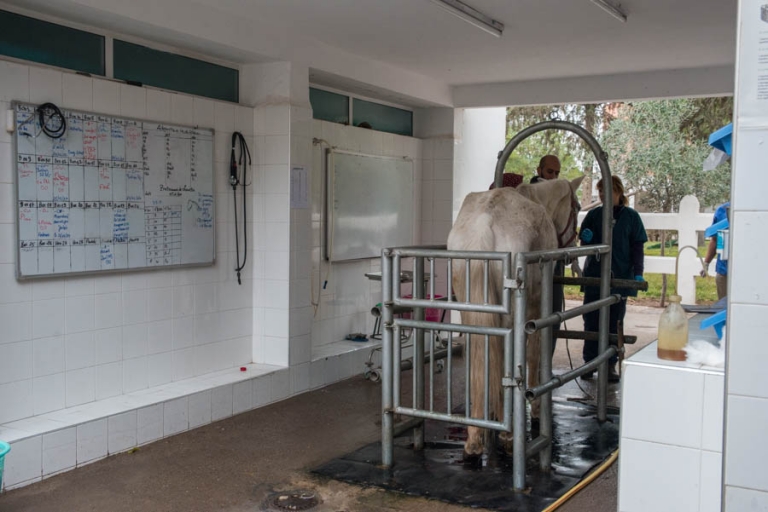 By this time we were all crying – much to the amusement of the Arabic men in the room (who I am sure think we’re all quite pathetic!). It was time to say goodbye to Whisky, our beloved little kitten.  We left her in the cat box with a can of tuna and some biscuits.

We decided to leave SPANA with a small donation and our email address, so we could hear any news of Whisky, although I wasn’t hopeful. Seeing how busy they are I knew they really didn’t have any time to email us.

I promised the kids that I would ring every week to find out how Whisky was doing and that if she hadn’t been adopted by May that we would return to adopt her. 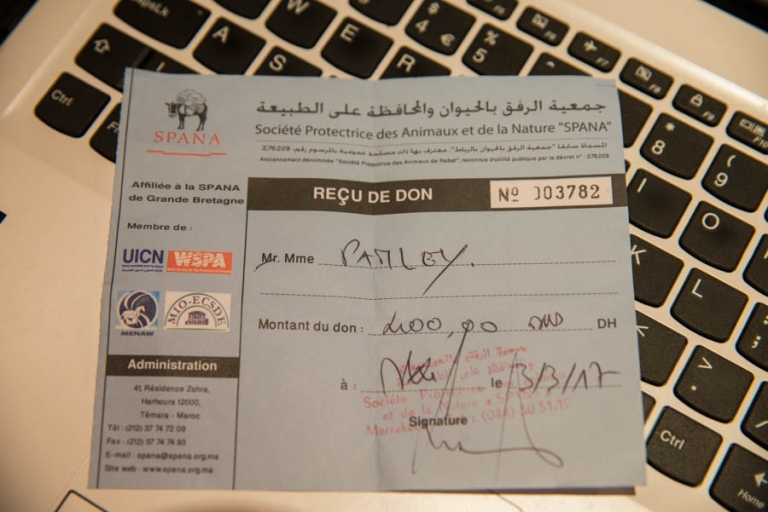 Imagine our utter astonishment to receive an email just a few days later with a photo of Whisky and her new owner Sara.

In some respects this was bitter sweet news. On a purely selfish level we wanted Whisky for ourselves but it is such good news for Whisky to have found a new forever home. We’re so pleased for Whisky and Sara. 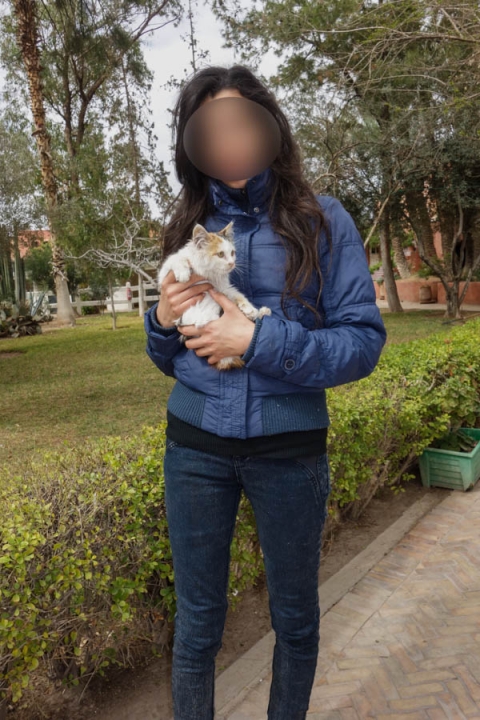 SPANA work so tirelessly to help the lives of animals in developing countries that I’d like to help them too.  Here’s what you can do to help them.

There are SO MANY WAYS to get involved and help SPANA, there’s bound to be one that suits you. Please consider the great work they do and if you can, donate something 🙂 Thank you

A big thank you to: