After two weeks in the sun drenched tip of Villasimius we headed west to Chia – Sardinia’s southern most tip. The skies are full of black clouds, thunder rumbles throughout the valley and the rain keeps coming. There are puddles everywhere and at one point the wind blows the rain almost horizontal.  At the first sign of clear sky, we went to explore Su Porto Chia Beach & Chia Tower. 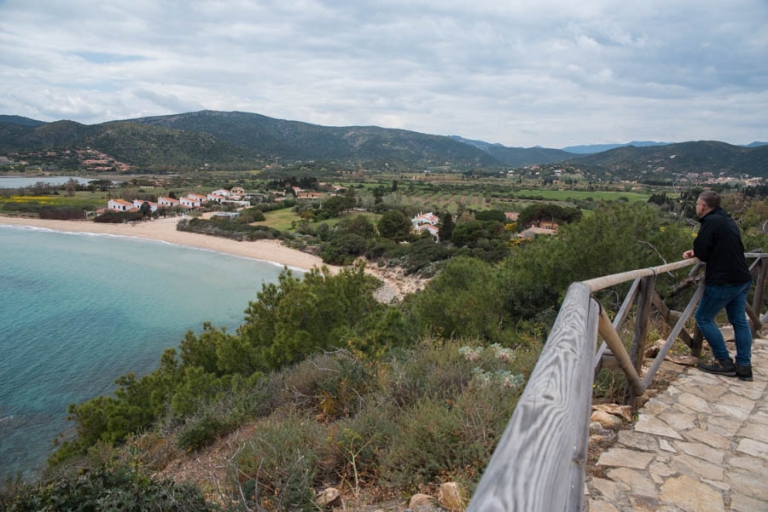 The Town of Chia

Chia is a remote and small town about an hour west of the capital of Cagliari. There are a few restaurants but during winter and early spring these are closed giving the town a quietly abandoned feel.

Walking up to the tower

Fortunately we’re staying just 250m away from the tower so we’re able to just walk right up to the pathway however there is ample parking in the vicinity and even parking on the beach!

The pathway is all paved with lovely slabs, although they’re a little uneven and quite steep. Clearly being at the top of a hill it’s going to be steep! 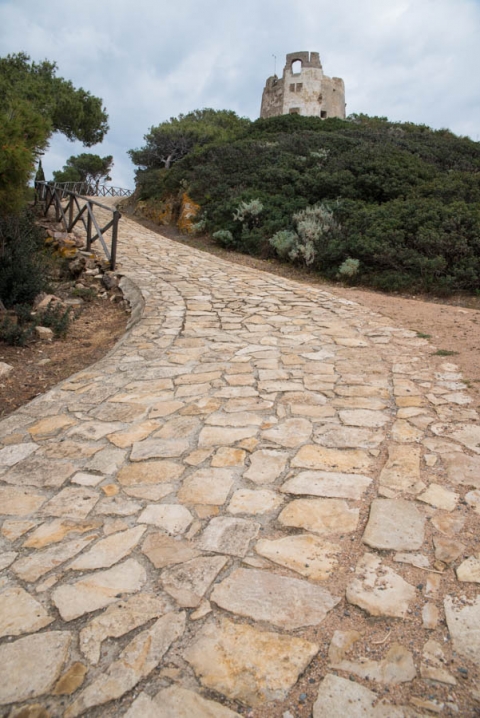 The view up to the tower: Su Porto Chia Beach 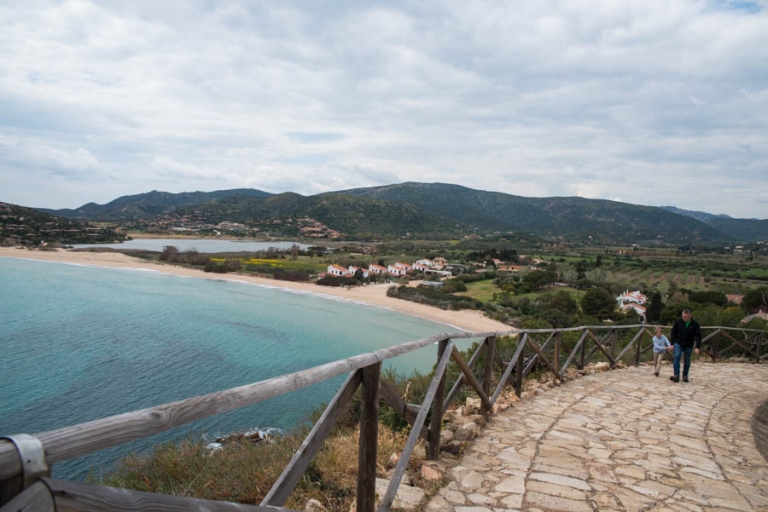 Walking the path up to the tower

The Tower of Chia

Chia tower, which was built in 1578 and measures 42 meters high, stands on a promontory where originally the acropolis of the ancient center of Bithia was located and it overlooks the surrounding area. It once protected against pirates and was equipped with cannons of 6 and 8lb caliber and a garrison of five people.

The tower and the grounds below seem to be undergoing a bit of reparation work and (in 2017) the tower was closed. We still climbed the rickety steps and had a good view though. 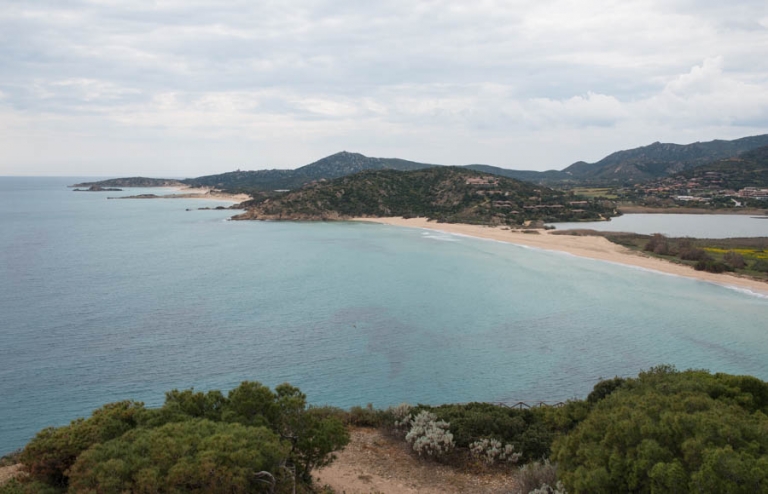 The view over Chia bay and Spiaggias di Sa Colonia and Morto.

The view from the tower over Su Porto Chia Beach

Climbing up the rickety, rusty steps which moved every time somebody stepped on them, the view from the tower allowed us to see many of the bays of Chia which are impossible to see from the ground.

The beaches look wonderful and I’m retiscent that we didn’t come in warmer months. Despite the rain we’re experiencing the bays are gleaming blue and the sand looks inviting. Pity it’s about 6*c. 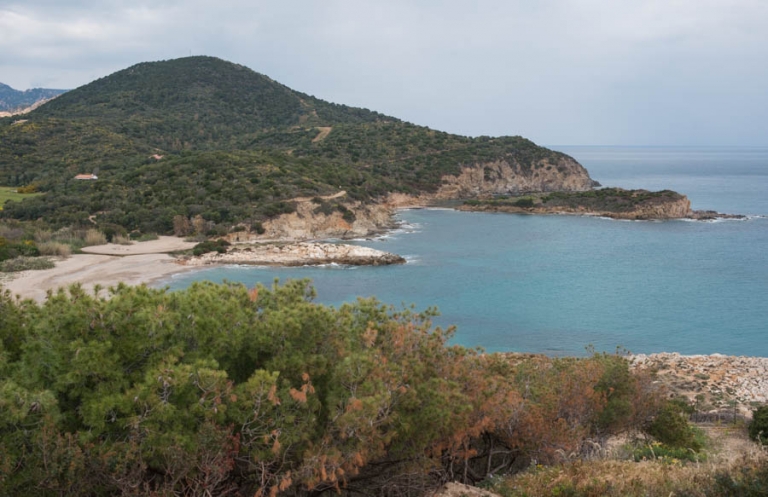 Su Porto beach from the tower 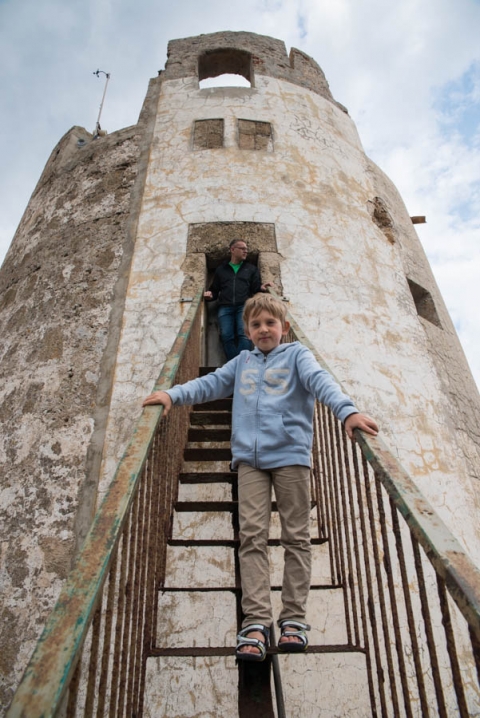 Climbing the steps up to the closed tower 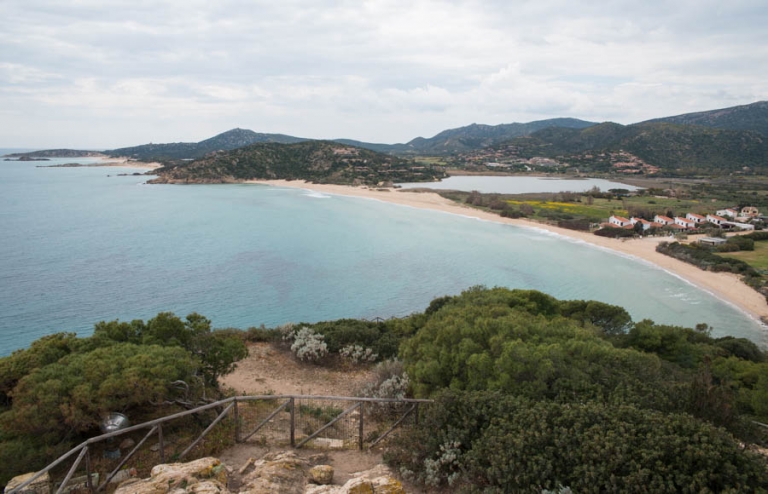 The view over the bay  and Spiaggia di Sa Colonia and Morto.

We headed down to the port beach of Chia to meet the mouth of the river and to see if we could make it over the rocks to the ‘isola su cardolinu’. Despite its name it isn’t an island.  We were still in the tail end of the rain and wind and and with the tide rising we couldn’t make it round without getting very wet so we stayed on the rocks for a bit and explored.

The beach on this side of the tower is a shingle beach although the water is just as clear as everywhere else we’ve been in southern Sardinia. The pebbles are perfectly flattened, after being repeatedly tossed up the beach by the waves, and perfect for teaching kids how to skim!

The river runs straight down to the beach and we had great fun jumping over the river onto the rocks. Simple things are definitely the ones that please us most. 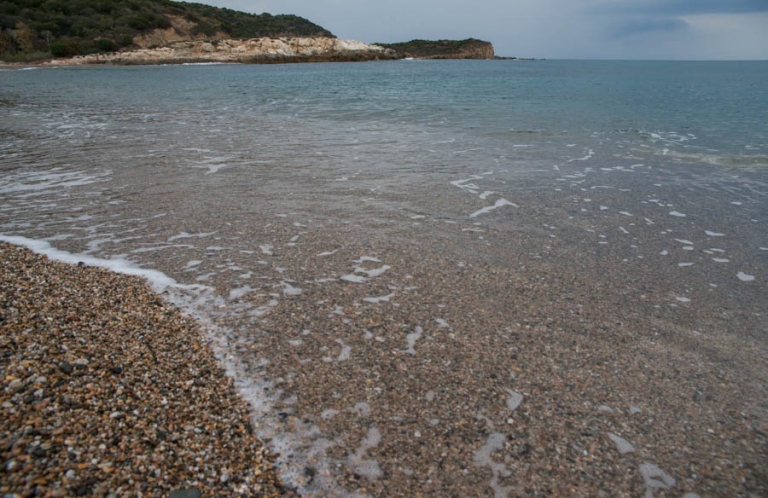 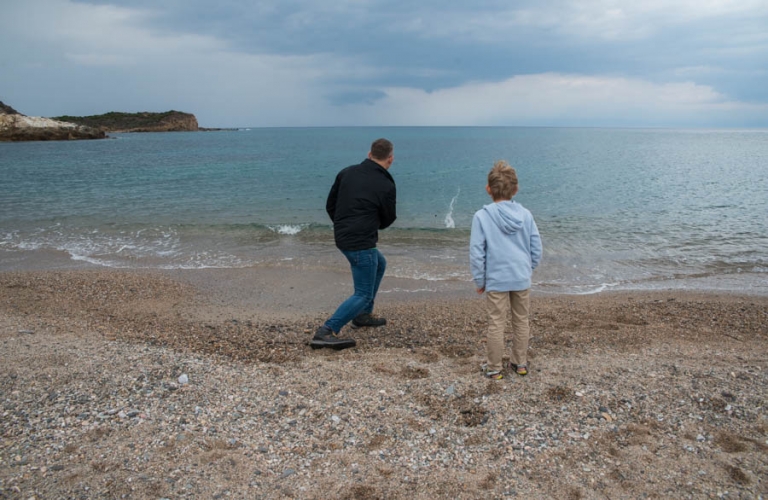 Teaching the boy how to skim rocks 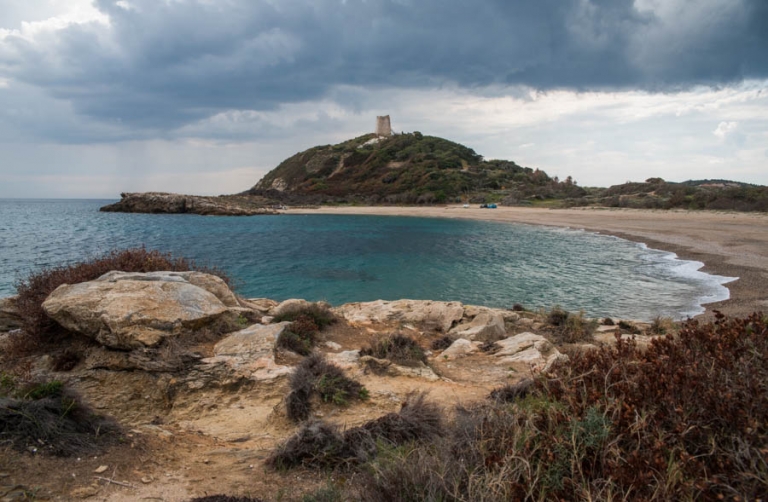 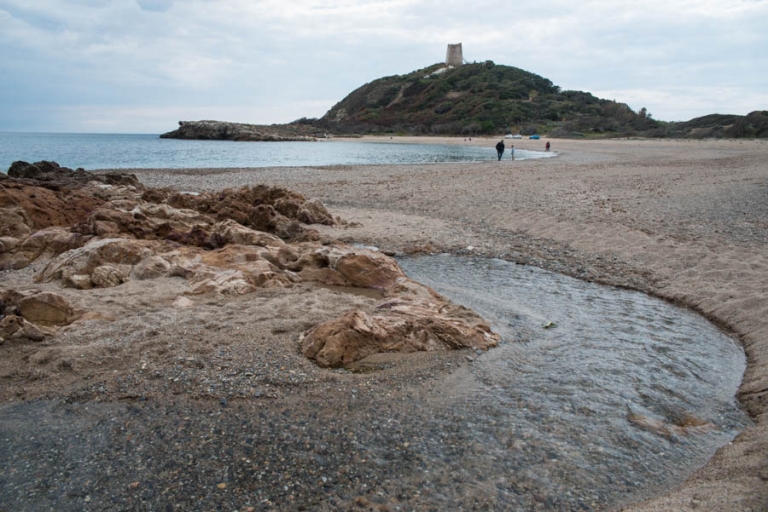 Rocks along the Sardinian coast are mostly sandstone. This is apparent by the shapes they become and the holes and disfigurement they suffer but this rock was very different.

We think that this rock, definitely a metamorphic rock, is schists rock, although we’re not 100% sure. If you know, let us know please. 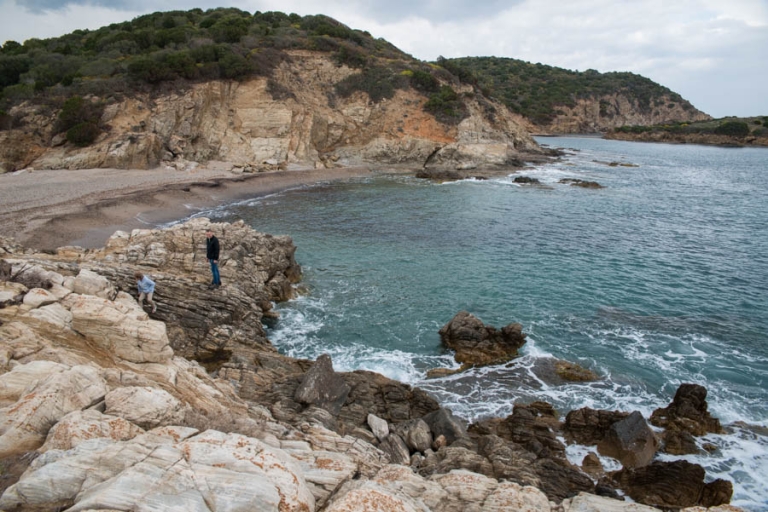 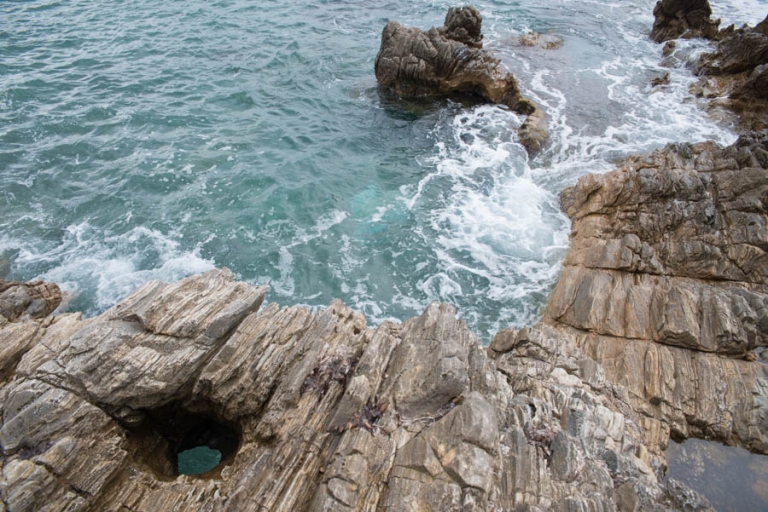 Holes in the rocks

Look at that cloud!

All of a sudden we felt spats of rain and this black cloud descended upon us. Of course, we’re British, we’re used to a fe pats of rain so it didn’t deter us. Instead we went off in search of a different beach. 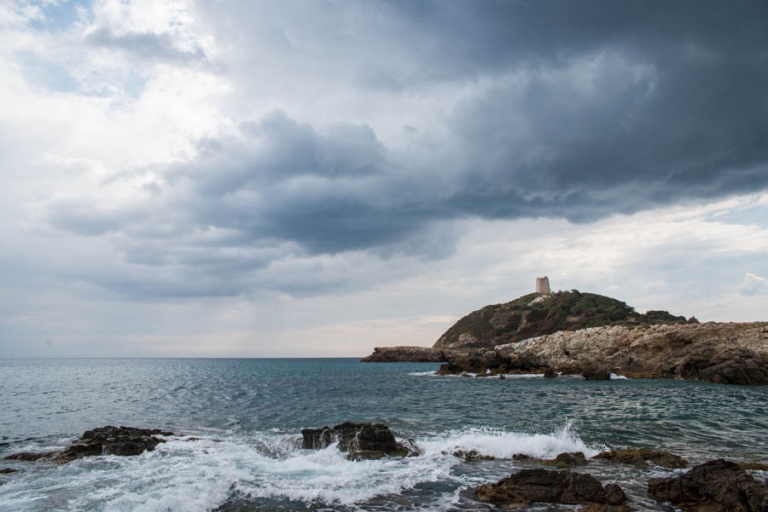 The clouds loomed over us: Su Porto Chia Beach 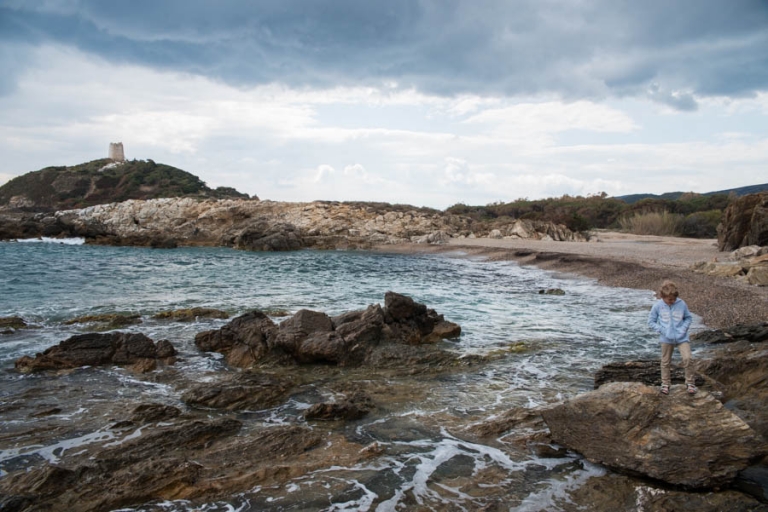 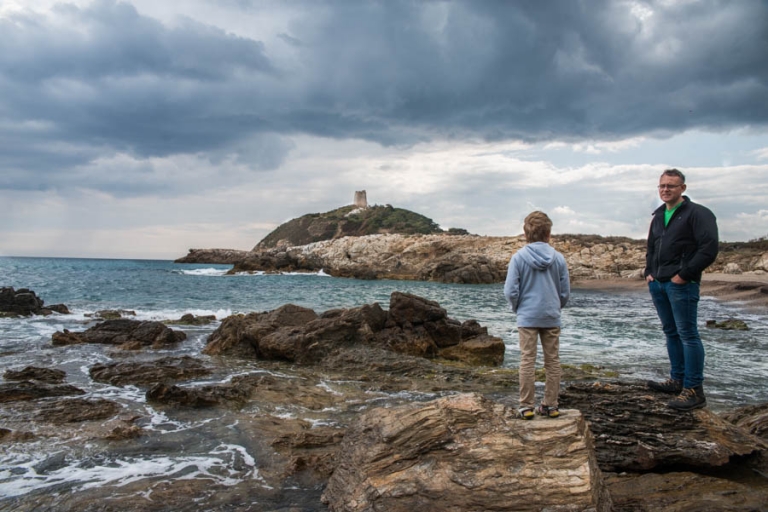 Not deterred by that looming black cloud, we headed over to Spiaggia di Chia Sa Colonia, the beach that sits west of the tower.

In contrast to the shingle of Spiaggia di Su Porto, this beach is made of fine yellow sand and is so long it’s split into three seperate beaches and bays. With its turquoise waters it’s just as appealing as all the others we’ve visited! I can imagine that being here in summer is a real treat although I suspect there are more people than now. 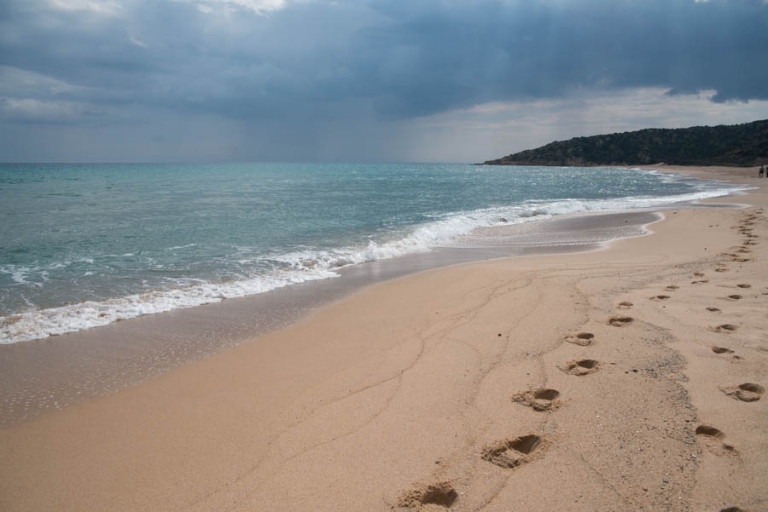 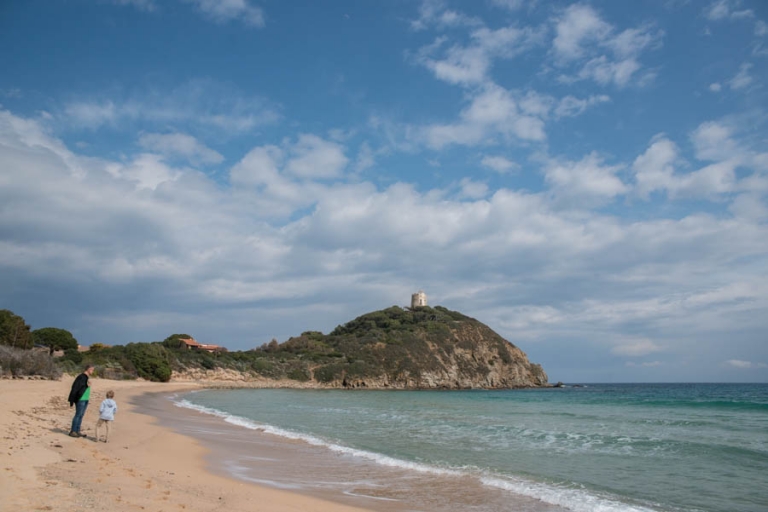 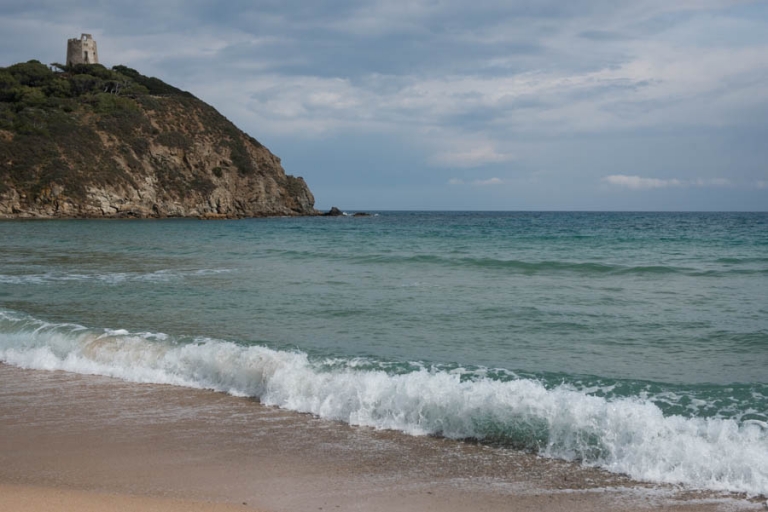 Want to stay in Chia and visit Su Porto

Chia beaches look like some of the best we’ve seen – but then southern Sardinia is nearly all perfect beach. Chia would make a nice, slightly off the beaten track, place for a relaxed family holiday. The beaches are shallow and calm and great for beginners but the waters look ideal for snorkellers and paddle boarders.


What else can you do in Sardinia