Costa Rei Beach As A Day Trip From Villasimimius In March

What is the Costa Rei like in March? How long does it take to get there from Villasimius and what is there to do there in spring?

Villasimius in March was a great sunny spot to spend March and escape the bleak winter of many European countries. The only minor problem is that during the winter and early spring months at least half of the restaurants and shops in Villaimius are closed.  At a loss of what to do on one blustery Sunday, we took a drive up the coast to see what we could see and where we would end up.

Southern Sardinia is really mild during the spring months and we had daily temperatures of about 25*c however there are times when the wind can pick up and if you’re in a non-sheltered area it’s a bit gusty. The Costa Rei is on of those wild and rugged spots that in March was empty. We had the entire beach to ourselves. It’s such a shame we didn’t have any paddle boards with us because the water was dazzling and the Costa Rei would be a great spot for water sports.

Driving in the spring months is really easy as the roads are pretty deserted. The roads are in a much better condition than the UK and driving with the sun pounding through the window was a delight.

We took the SP19 & 18, 18km north and parked up near Via Delle Rose and crossed onto the beach by foot. The drive was about half an hour and we rented our car through RentalCars (get a free quote by clicking the photo).

Costa Rei is a huge expanse of semi-wild beach – at least in the spring months – and it’s for this reason that a trip to Sardinia is PERFECT between March and June. There are no tourists and the beaches are deserted. We had nearly every beach to ourselves most days and we wore cropped jeans and tshirts for nearly our entire trip.

Costa Rei itself sports over 9km of beach line and a scenic lake (which is nicknamed a pond) is where wild flamingos live. Stretching between Capo Ferrato and Sant’Elmo it features white, powerdery sand, turquoise glistening waters, rocks and gentle gradientcoves.

Obviously during these months there are no beach bars, deck chairs, kids clubs or dripping cold cocktails but if you want a pretty warm climate, short wearing weather and empty beaches, this could be the place for you.

What Other Beaches Are There Near Costa Rei

There are a whole host of other beaches surrounding the Costa Rei (not including all of the ones around Villasimius) surrounded by coves and that beautiful white sand, most of which are more sheltered from the wind.

How To Get To Sardinia

We flew into Cagliari in the south and avoided the north as it was still very cold. Search for flights starting at £22 with Skyscanner.

Where Could You Stay In Sardinia?


Why Is Villasimius Good For Worldschoolers? 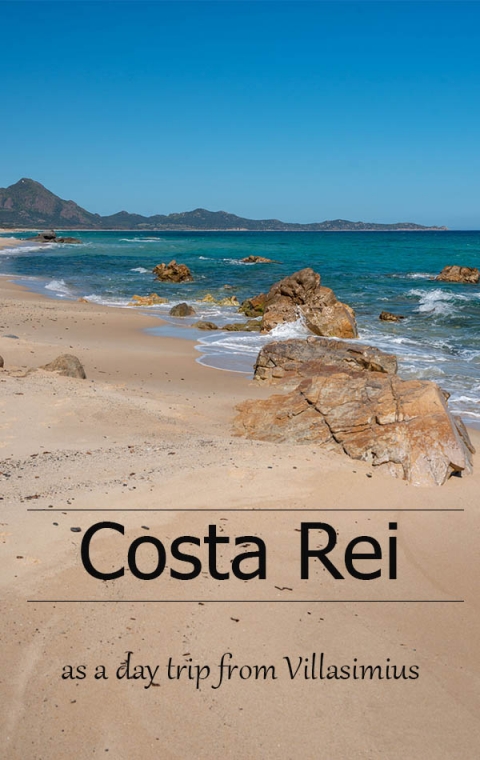 Spread the love
Posted in Italy
« Canyoning the Cetina River With Kids As A Day Trip From Omis, Croatia
10 Of The Best Places For Adventurous UK Based Holidays For Families »