Tarn Hows near Coniston in The Lake District is a great short walk with great views, especially beautiful in autumn and winter. Tarn Hows with kids is a good choice for those not wanting a huge hike as it’s a short circular walk with often a frozen lake. 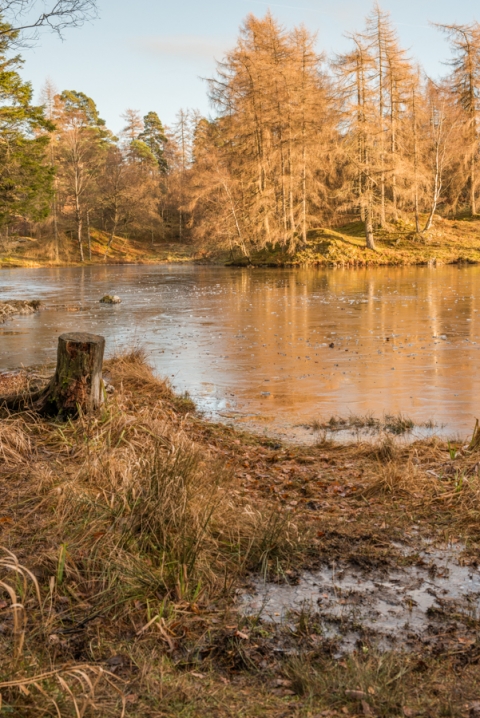 A tarn is a small mountain lake or pool and The Lake District has more than 100 of them. However whilst tarns are normally created by by a glacier this tarn is a Victorian man-made creation.

It was created from three smaller tarns, known as High Tarn, Low Tarn and Middle Tarn which occupied an area of marshland. The stream which joined the tarns was dammed in the 19th century. 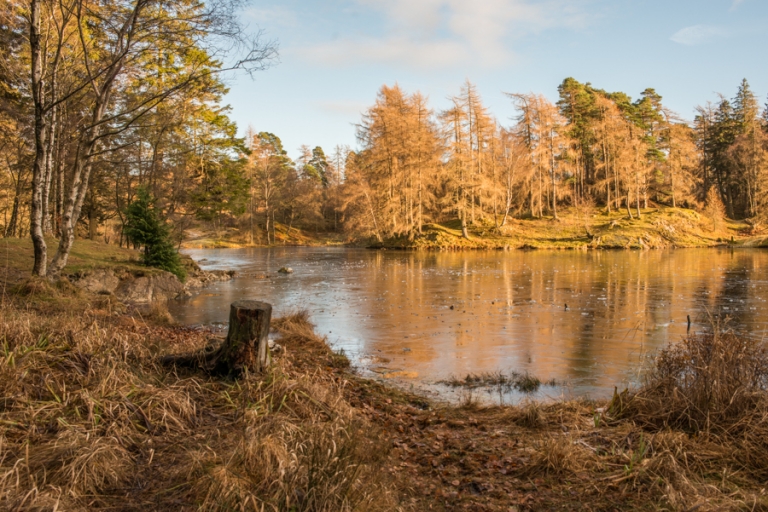 At the start of winter: Tarn Hows with Kids

In 1930 The Tarns were owned and listed for sale by the Marshal family. As one of the farms within the estate was previously owned by Beatrix’s great grandfather, she wished to buy the entire estate however could not raise the £15,000 asking price. With her rich mother unwilling to lend her the money, Beatrix approached The National Trust to jointly own the land. However, neither the National Trust or the Forestry Commission could obtain the whole sum quickly enough and they were forced to raise a public appeal. 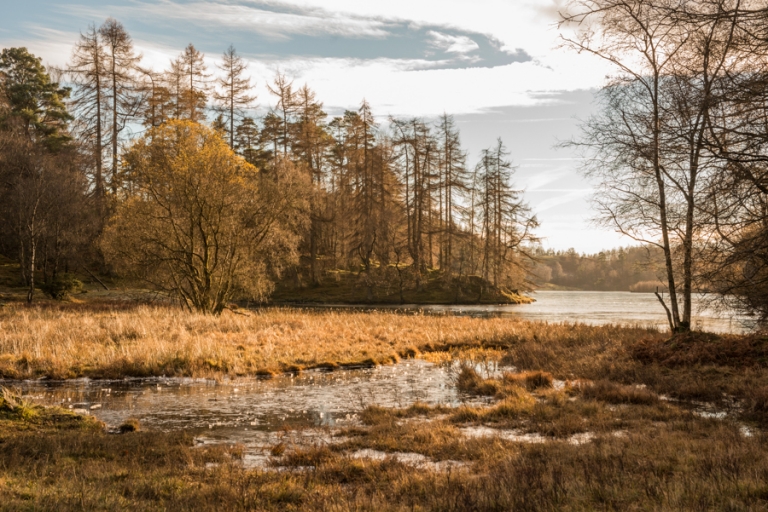 Tarn Hows at the northern end

Tarn Hows is an easy, child/toddler/pushchair/wheelchair friendly walk and great in all seasons, although we find it especially beautiful in autumn and winter when the tarn is frozen.

Located to the north of Conniston and west of Windermere, it is a flat and wide pathed walk of 1.5 miles (You can make it into 2.6 miles by following our route below). 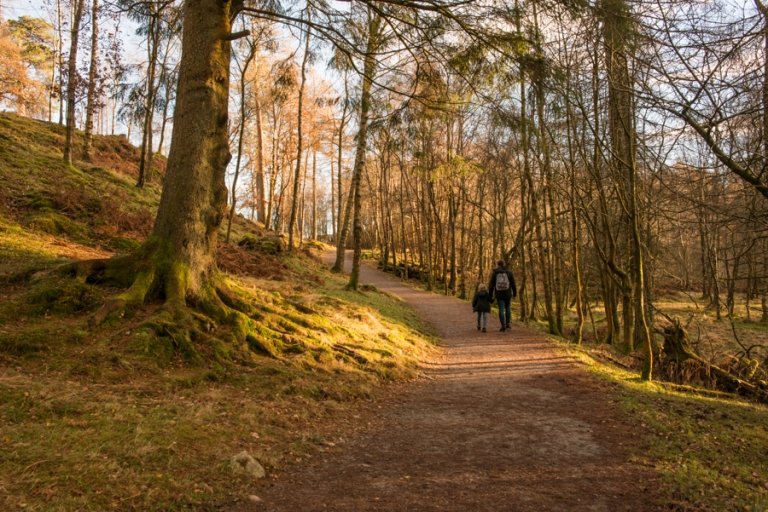 At the northern end of the valley the tarn is fed by basin mires and and the southern end is drained by Tom Gill which tumbles down small waterfalls towards Glen Mary Bridge which is where we started and ended this walk. 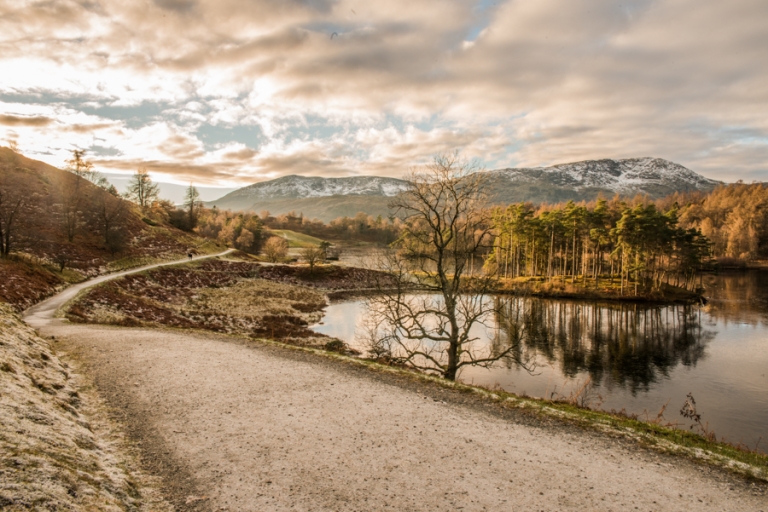 Tarn Hows sunset from the east of the lake

By parking at Glen Mary Bridge (not wheelchair friendly) and taking the higher routes around Tarn Hows, you can turn the route into a 2.6-mile circular walk (rather than 1.5 miles). We followed this route from The Walking Englishman.

From the Glen Mary car park, you take the little bridge that crosses the last of the Tom Gill waterfalls and you ascent the well-trodden path up through Lane End Coppice and Harry Field Wood at a gentle climb (for The Lake District), following the waterfalls and river of Tom Gill.  It is definitely not suitable for pushchairs or wheelchairs (unless you’re prepared to carry them UP).

The path comprises of moderately steep, stone steps which in the winter are icy and slippy. As a result, you’ll need to walk on the side verges which are littered with tree roots. 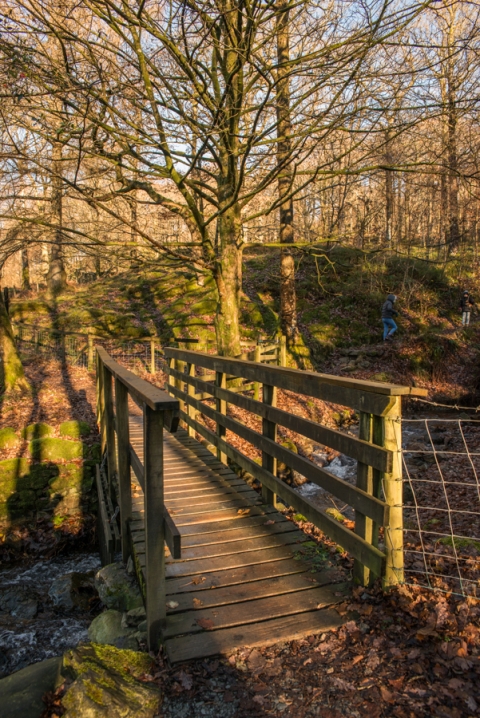 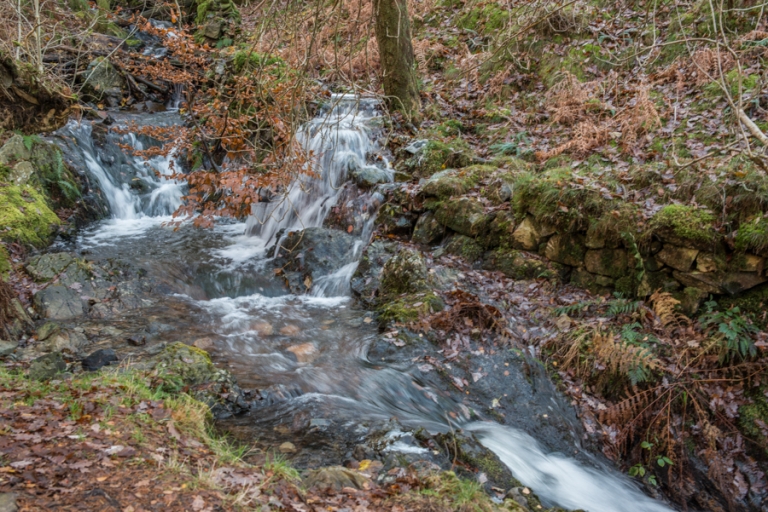 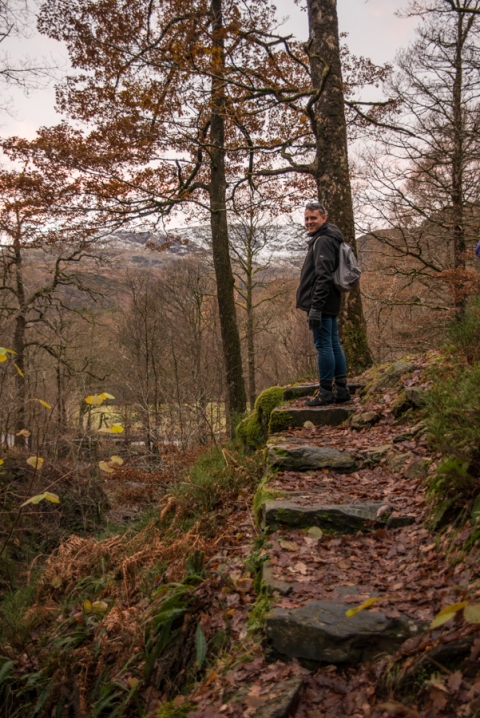 Steps along the route 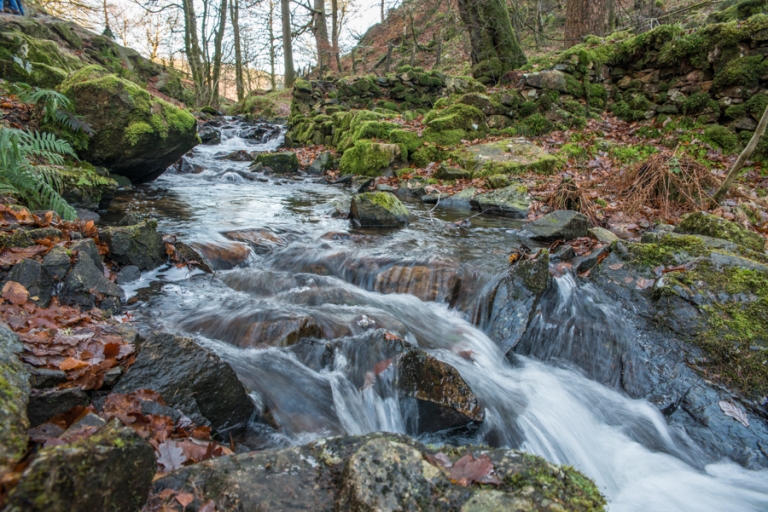 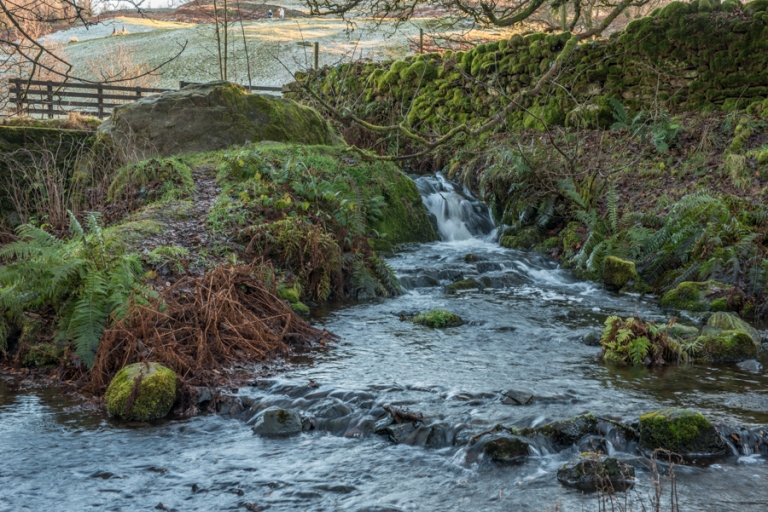 Arriving At The Tarn From Glen Mary bridge

After the final mini waterfall, you’re suddenly opposite the tarn and you have a choice of direction. We chose clockwise and headed north. 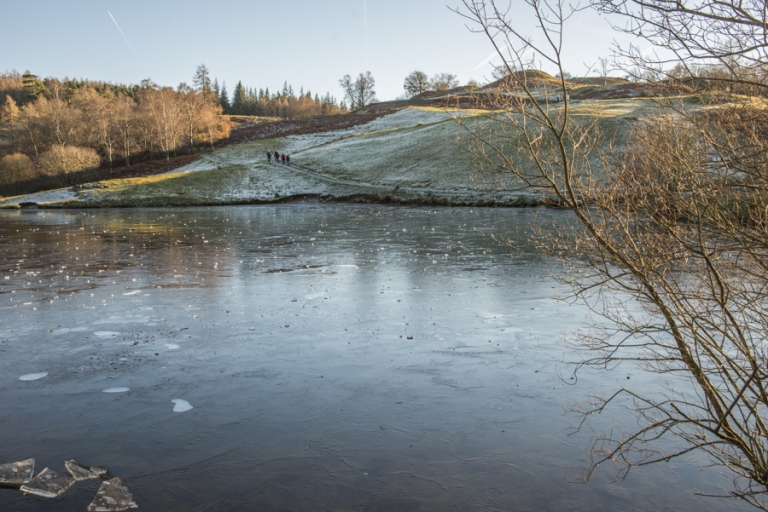 Tarn Hows With Kids Is An Area Of Natural Beauty

The tarn has been awarded as an area of outstanding natural beauty and it isn’t hard to see why. With views over the snowy caps of Coniston hills and Langdale Pikes, it makes a stunning short walk.

When we visited at the end of November the tarn was starting to freeze and our kids had great fun trying to smash the ice with sticks and hear the echoes vibrate around.  It was very picturesque and there was lots to photograph.

Going north along the tarn there are loads of little paths heading off to wooded areas, there are seats so you can enjoy the view, fallen trees to balance on, fallen trees full of old coins and plenty of places to sit in the grass and have a picnic. Not to mention the fascination of ICE to break! 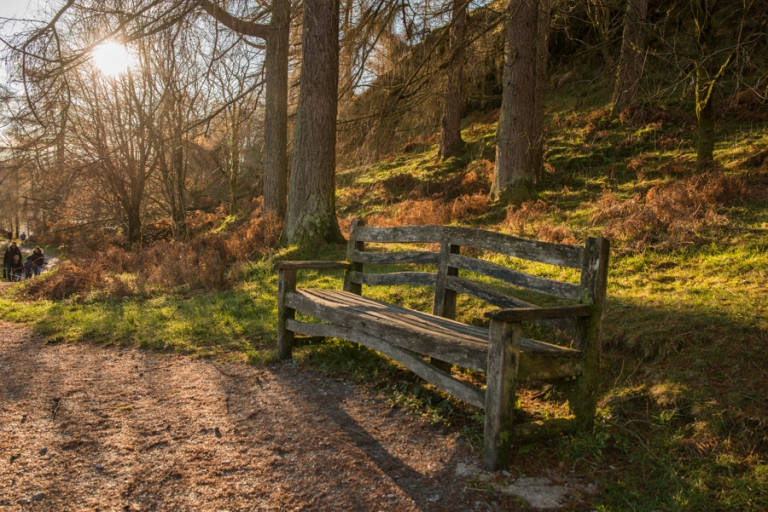 A seat with a view: Tarn Hows with Kids – the frozen mountain lake 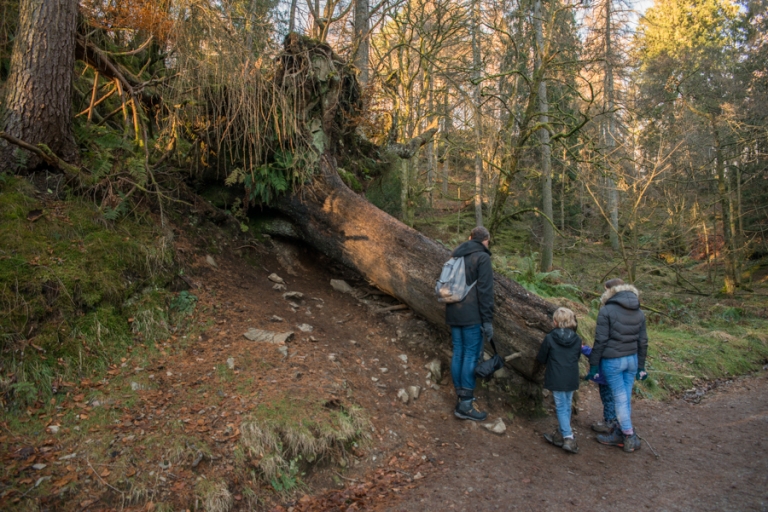 A tree with old coins in it 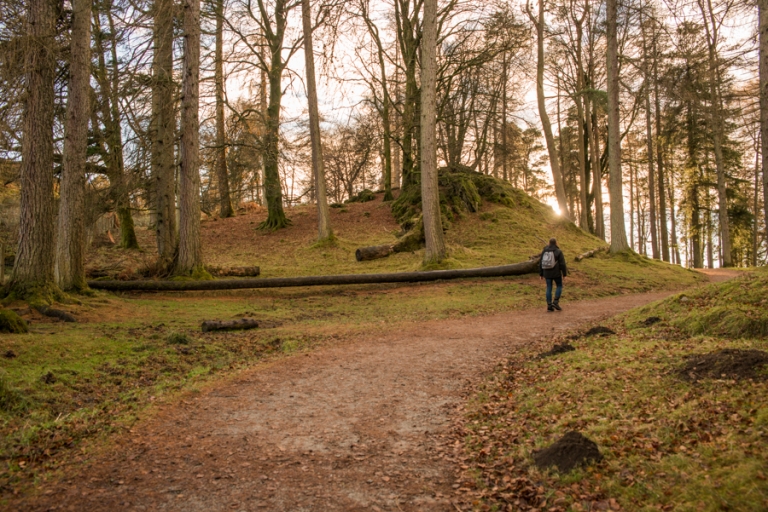 Fallen trees to climb and explore

Look AT Those Mountains

As a self-confessed ocean junkie, I have been surprised by how much those mountains have captivated me (although given my love for Norwegian Mountains this summer maybe we should have seen it coming). Growing up here, I don’t recall having any real interest in these looming rock giants but now I just can’t wait to get out and explore them!

I was surprised by how much the terrain reminded me of both Norway and Canada. Maybe it was the huge pine trees? 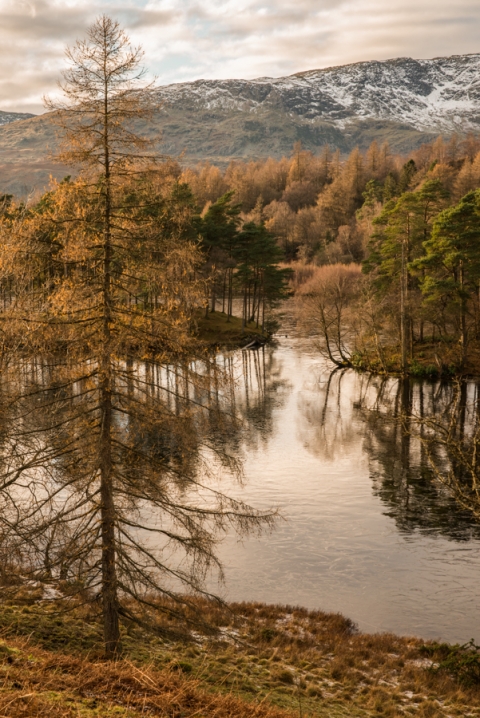 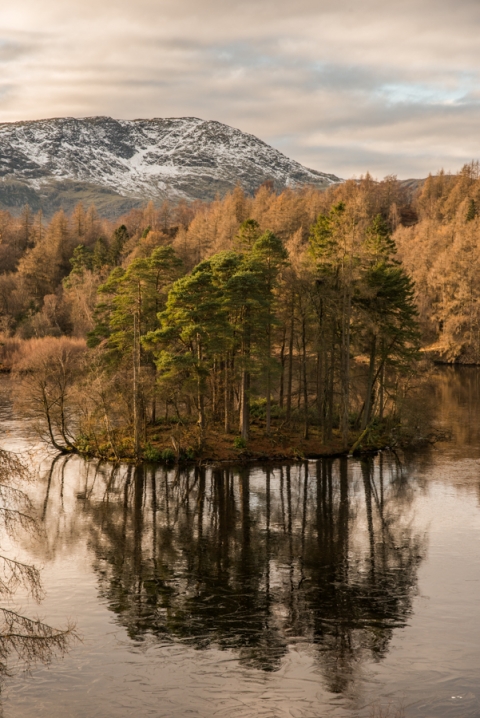 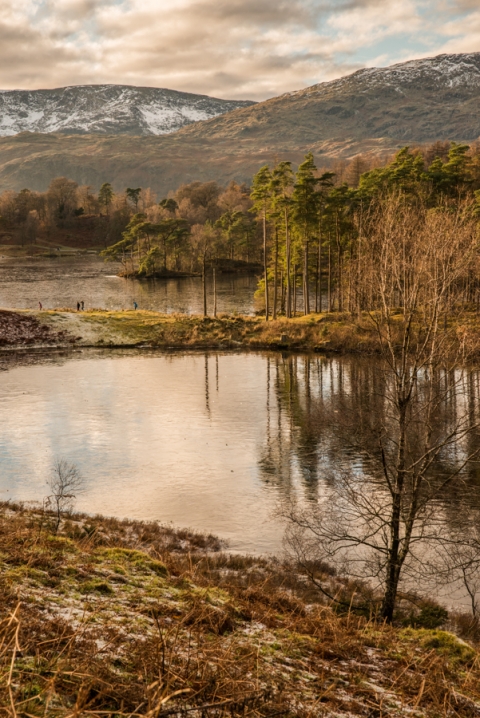 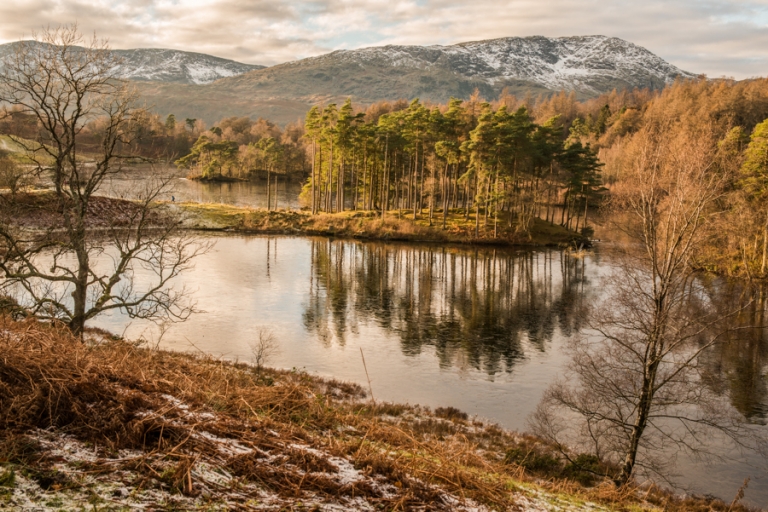 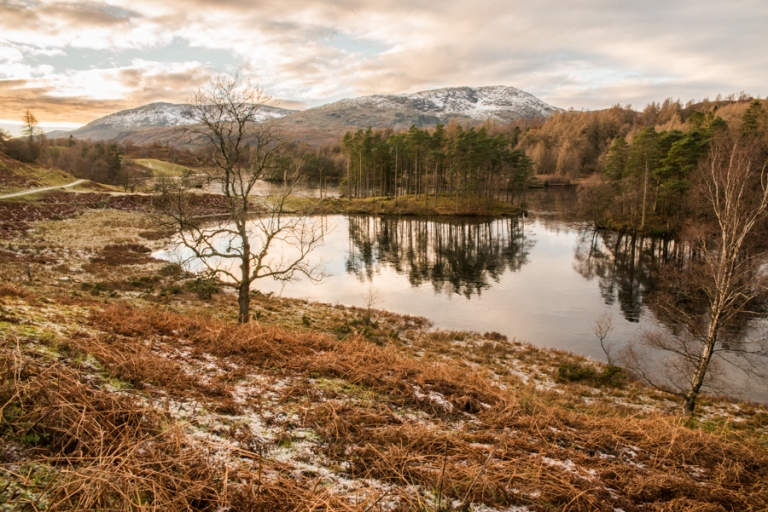 We arrived late (about 1 pm) and stayed until the sun started setting. The winter light disappears quickly but we were rewarded with a fantastic sunset before heading down back through the woods. 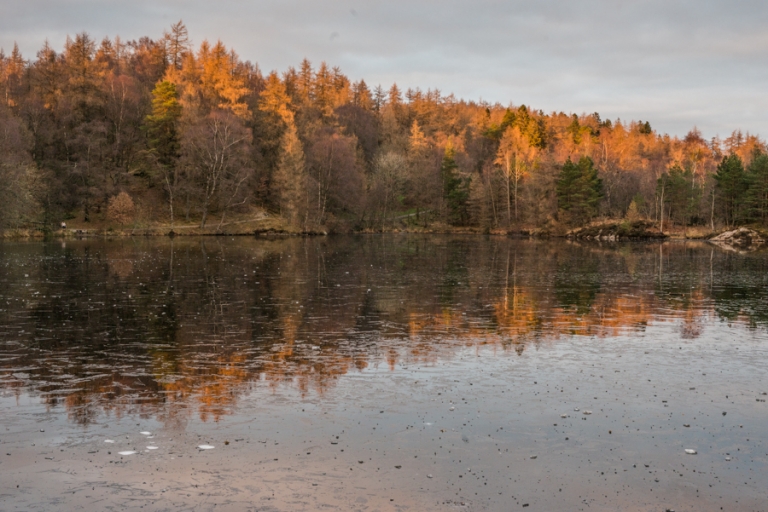 The setting sun highlighting the trees at Tarn Hows 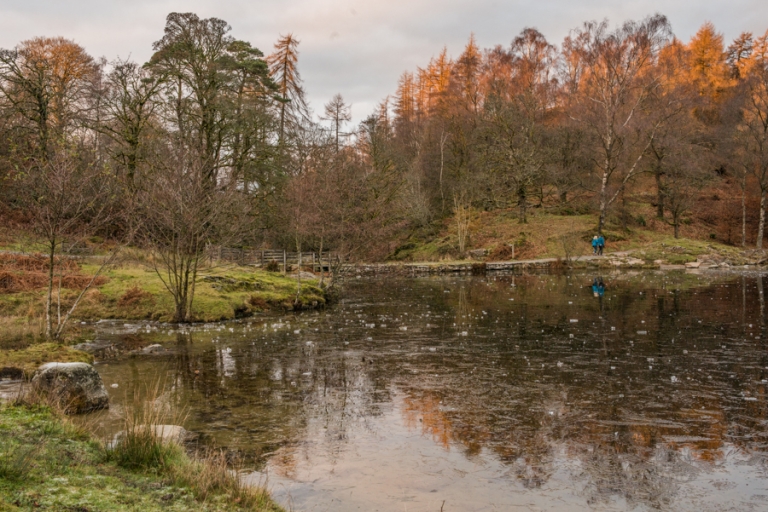 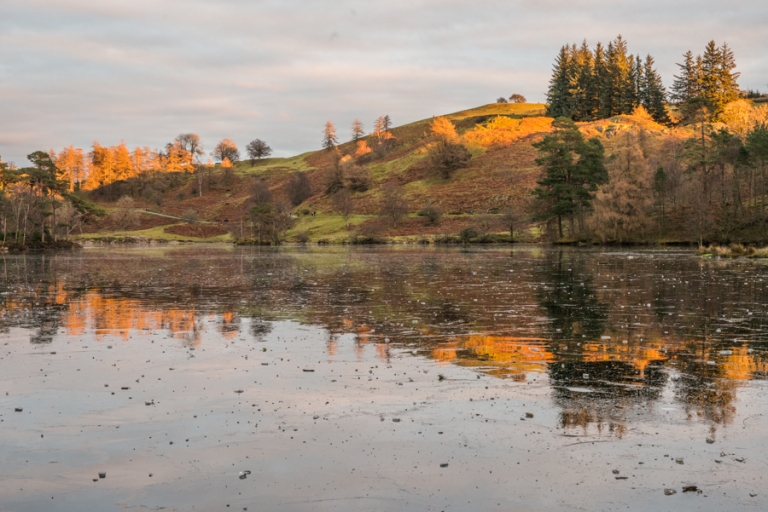 Watch Out. The Woods Get Dark

This is stating the obvious but as there’s virtually no light pollution so if you arrive late, give yourself enough time to get back down. 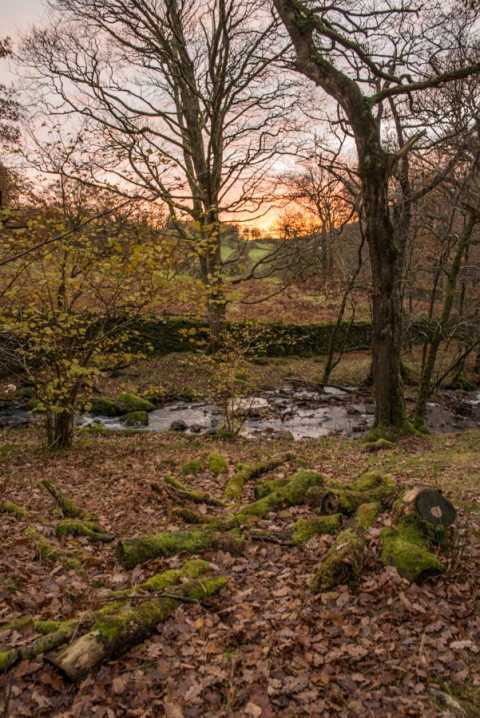 The sun setting through the coppice 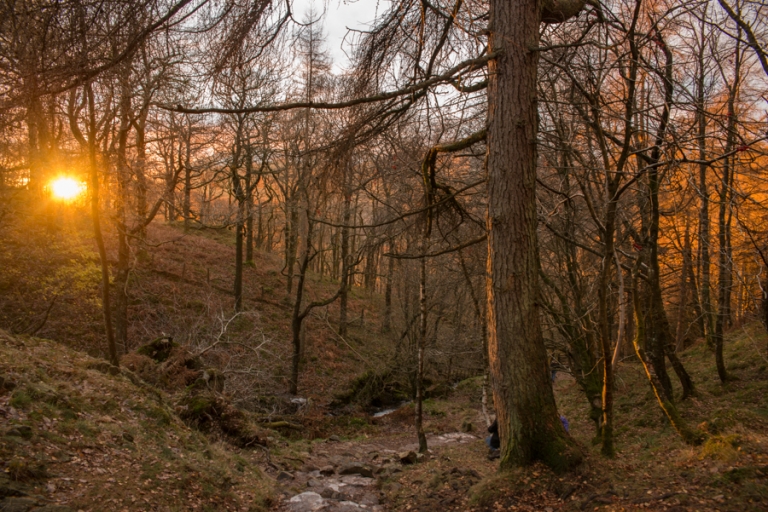 Making our way back down to the car 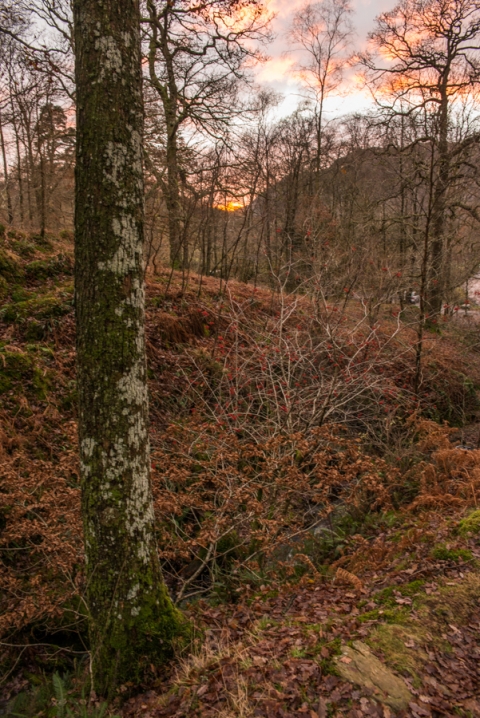 The sun setting through the trees

Use this interactive map to search for local cottages and hotels to stay in. 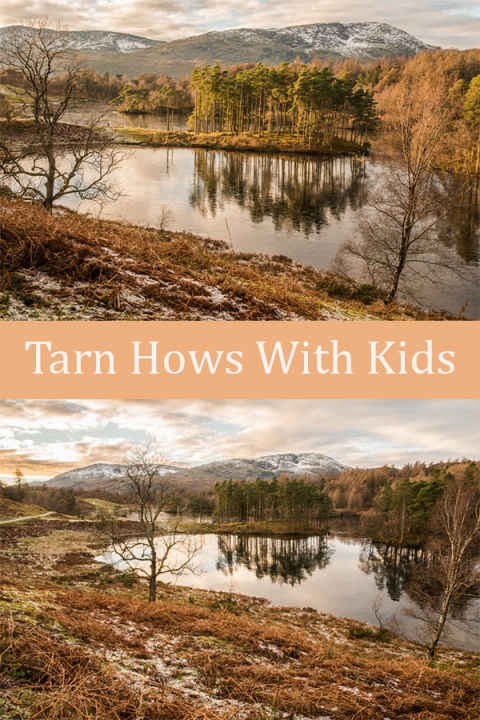 See what else you can do in the UK