Preikestolen with kids: Hiking in the Rain

It was the worst weather day imaginable but our last in Stavanger, Norway. We’d put off hiking Preikestolen with the kids but now it was time to face that if we didn’t do it today, we’d never do it. If you’re looking to hike Preikerstolen with kids, read on for our experience and top tips on how you can too.

Deciding To Hike Preikestolen With The Kids

We were staying in Stavanger when we decided to hike this mountain. It was a drive of about 90 minutes, probably a bit less.  Even if you don’t make it to Preikestolen, the mountain views along the way are breathtaking. Huge mountains dwarf picturesque red, wooden houses and dark blue lakes. The moody skies provide a touch of dramatics to the already spectacular scenery.

I totally fell in love with Norway which isn’t a surprise given I grew up in The Lake District in the UK,  but I wasn’t prepared for how beautiful it would be and the effect this would have on me.

All of these photos were taken with a Nikon D800 and the slightly fluffy photos taken with a wet GoPro Hero 3+.

How To Get To Preikestolen

Preikestolen or Pulpit Rock (as it’s sometimes called) is due east of Stavanger as the crow flies but of course those pesky mountains get in the way and you must either drive north or south of Stavanger to get there.

It will take approximately 90 minutes in the car.

Parking in either or the two car parks costs 100NOK per day which is equivalent to 10 euros, although the attendants leave at 5 pm. We were forced to park in the second car park which is slightly further down the mountain as the first was full. We arrived at 10 am and struggled to find a parking space in the second one. I suggest getting there early or late when the crowds have gone.

Other Relevant Posts On Norway

Prepare For The weather!

Norway is level with the Shetland Islands (if you’re British) and so it is unlikely to ever be scorching. With this in mind and how quickly the weather can change, it is best to take a mix of clothes.

It rained all night and battered the little wooden hut we had rented in Stavanger but had eased off in the morning. Just as we got to Preikestolen, it started to rain again.

So far we’d been saved the embarrassment of wearing our lovely raincoats, sadly no more! Hiking Preikestolen (Pulpit Rock) was cold (even with the exertion of climbing), we wore lots of thin layers which were easily removable but it was still quite cold if you sat still for too long!

I recommend a mix of short and long sleeves with light cotton materials.

Is The Hike To Pulpit Rock Busy?

Preikestolen is one of Norway’s most popular tourist hikes receiving approximately 200,000 visitors a year. If you climb it during the day and in the summer months, it is BUSY.

To get around this and because Norway doesn’t really get dark during the summer months, you could hike it during the night, camp at the top and watch the sunrise. I have seen some exquisite photos of the sunrise from the summit and I’d love to do it myself.

How Far Is It Up?

Preikerstolen is like a beginner’s introduction to hiking in Norway being only 3.8km each way.  The mountain itself which is also called Pulpit’s Rock, sits 602 metres above Lysefjorden. Formed 10,000 years ago, it is a relic from the ice age! 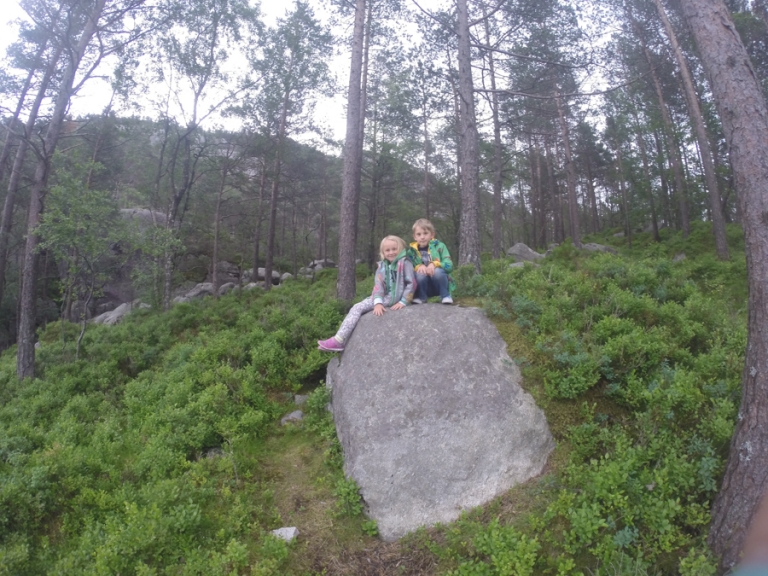 Just before the walk, not far from the car park.

The start of the walk is relatively flat with some boardwalks over boggy areas to gently ease you in. 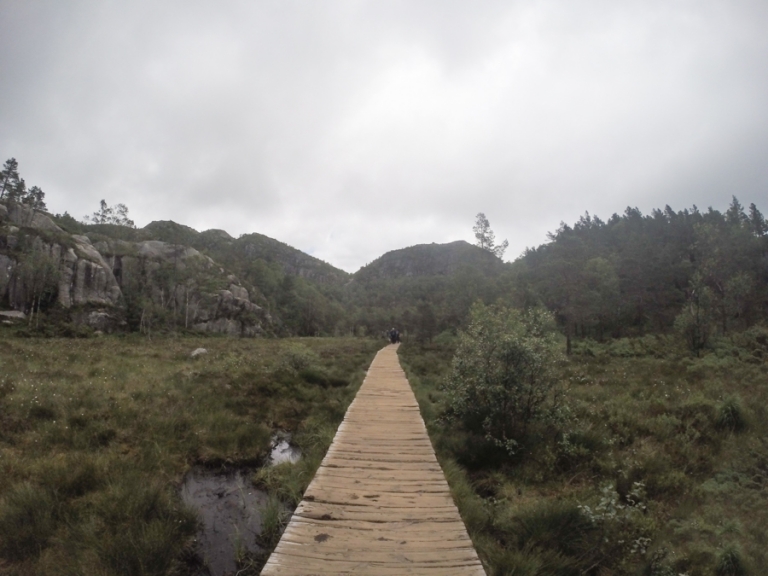 However, it soon becomes pretty steep. The pathways are clearly marked out and the rocks have been deliberately laid as a pathway but it is quite steep.  Our children aged 13, 8 and 6 years managed well. They really enjoyed jumping from the rocks and to encourage them we had a few stops and snacks.

We made up snacks with raisins and cashew nuts, bananas and apples and salad rolls for lunch. It didn’t weigh much at all. We also took two flasks of cold water. 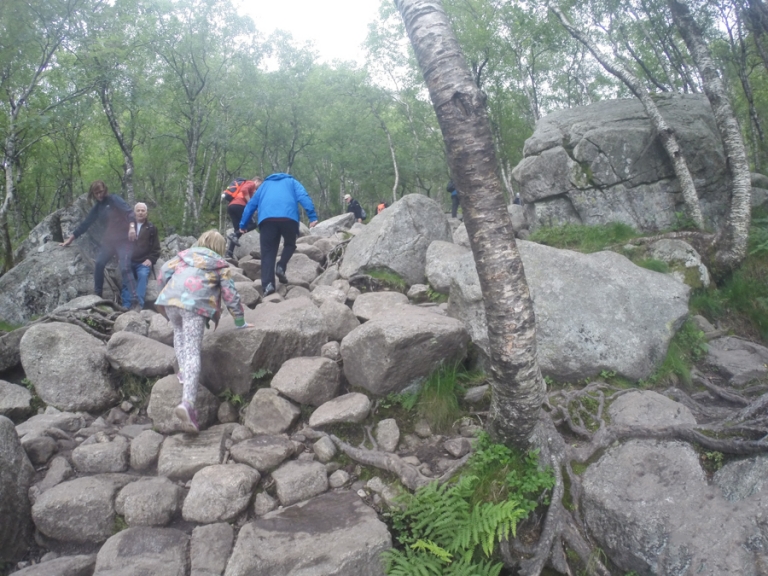 The climb gets steeper 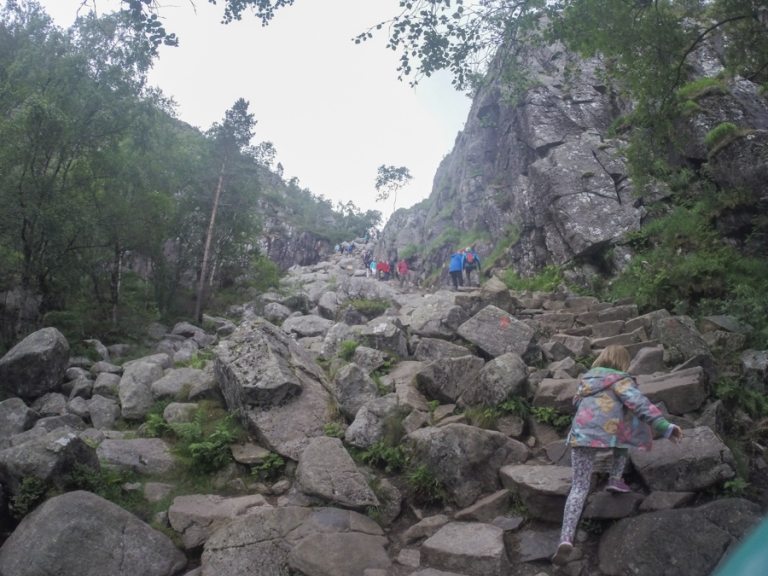 How Long Did It Take To Hike Preikestolen With Kids?

It took us 1hr 50 minutes to ascend and 1hr 45 minutes to descend. We didn’t climb very quickly, we stopped frequently for photos and to admire the view – which is spectacular.

There are lots of very beautiful views along the way, including lakes and wildflowers. If you’re brave enough, you can swim in the lakes but brace yourself, it’s not exactly warm water.

Other Things To Do In Norway

Jumping Up Preikestolen With Kids

Climbing with kids can work one of two ways. Either they beat you to the top in record time and you’re mortally embarrassed or you take it slow and encourage them. We chose a combination of the two. Wherever possible they ran ahead and had great fun climbing and jumping but we stopped for snacks too.

At times the pathway can become VERY narrow and if you suffer from vertigo it’s probably wise NOT to look down!! At some points you will need to jump over cracks and luckily there’s a small bridge connecting two parts where crossing no rocks are possible.

Let’s Talk About The View

The view from the top is magnificent however and this is a big, HOWEVER, you can fall off! If you are of a nervous disposition don’t go near the edge lol. I won’t lie, I am not the best with heights especially when the drop is 600 METRES!!

I was worried about the kids but before we left we set some ground rules which helped my anxiety about taking them up.

We explained to them that if they fell over the edge they would die. It’s not a nice explanation but I think it’s quite vital they understand the consequences.

I should probably tell you now that there is a crack in the rock. I am reliably informed that over time this part of the rock will fall off however it isn’t likely to happen for a few thousand years yet!

Check Out Local Accommodation In Norway? 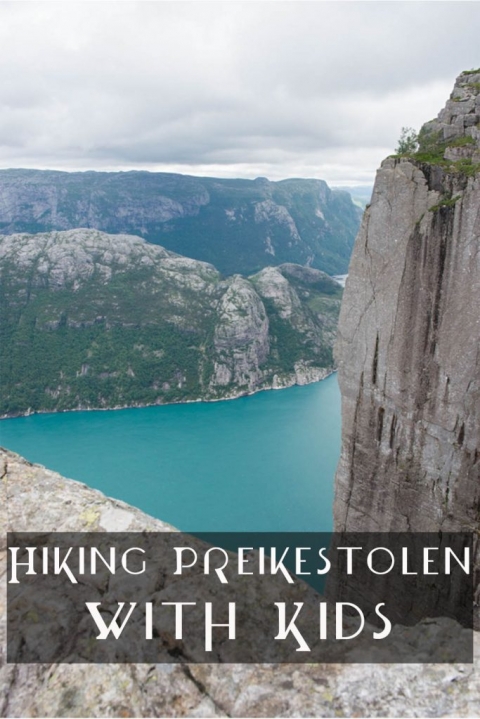 Other Things To Do In Norway
Klook.com

Since Norway, we’ve visited over 20 different countries. We’d love it if you checked out some of our more recent posts below

Spread the love
7
Shares
7
Shares
Posted in Norway
« What’s it like being vegan in Lyon?
Floibanen Funicular In Floyen, Bergen With Kids »