20 reasons Why You Should Homeschool, Unschool & Worldschool

We have been homeschooling, unschooling and worldschooling off and on since 2012 and we think it’s been invaluable for our children. If you’re considering it and want to know more, read on. Homeschooling has been immensely rewarding for us so we think all families should have the opportunity to do the same, if they want to. Here are 20 reasons why we continue to homeschool our three kids.

Why Did We Start To Homeschool?

We moved to Perth, Western Australia in 2011 from the UK. Our kids were pretty small back then and ranged from 18 months to 8 years. They had all attended school, pre-school or a nursery in some form. Homeschooling was never really on our radar but once we hit Western Australia and realised just how different the education system was, we decided to give it a bash.

Back then, we based our days on project learning which our kids loved. They would spend their days working through topics that interested them most and in the evenings, I would put together topic packs they could work through. We had a loose timetable but generally, everything was based around reaching academic milestones and eventually slotting them back into mainstream education, which we did when we moved to Queensland.

After we moved to France and our kids were psychologically damaged by the horrendously cruel and rigid education system there, we started homeschooling again. However, we became location independent shortly after and started favouring a worldschooling approach.

Homeschooling: Generally kids learn at home with a timetable and set subjects or curriculum. Learning can be blended between online or through books and can be semi-structured or structured. In my experience parents who are very rigid and try to emulate a teacher-pupil relationship with a very structured timetable, face the most hostility & resistance from their kids.  Curriculums can be both online, in co-op groups and through books and worksheets and can be combined with other techniques.

Worldschooling: Usually travelling and allowing the world to teach your children as you travel. This could be by learning new languages, attending local schools (not international schools), taking local tours, meeting local people, learning local skills and generally allowing the world to inspire kids. Some parents cannot travel and use material from around the world to teach their kids. This could be YouTube videos, books from different cultures, music from around the world, exploring maps, planning imaginary trips or introducing children to people from different cultures in some way.

Unschooling: This approach is the most flexible and allows children to be entirely in control of what and how they learn. Self-directed learning can come in many forms and parents need to be openminded about what constitutes learning.

What Are We Currently Doing?

At the time of writing this, we’ve been in lockdown for a number of months and we’ve been using a combined homeschooling-unschooling-worldschooling approach.

How does this work? They have two hours every day of formal online lessons with academic subjects such as maths, science, history, geography, English, drama, book studies. The only criteria we have set is that they MUST do two lessons of maths every morning which takes about 30 minutes.  Aside from that, they can choose what lessons they complete in those two hours and learn what they want to.

After lunch, they have three hours of unschooling where they follow their own interests and pursue their own learning. The only criteria is that they must be learning something. Sometimes they go skateboarding, rock climbing or swimming. Other times they ask to go to a museum or watch a documentary. Other examples of learning are listening to audiobooks, reading or going to the library, learning a musical instrument, making a bowl with clay, designing a poster, watching YouTube for art techniques, cooking, playing with lego or chess, doing science experiments with bubbles or materials. Literally, as long as they are busy and learning by engaging their brains, we’re happy.

Using this combined approach has enabled our eldest child to gain access to a top London university a year early at the age of seventeen and our middle child to start working towards technical qualifications three years early.

What About When You Travel?

Our learning approach depends on where we travel to and how long we spend there.

If we’re fast travelling with little baggage we allow the environment to teach our kids. We’ve been to fifty-two countries, we nearly always stay in Airbnb and with the local community and there’s plenty to learn everywhere we go.

If we’re slow travelling, usually with our car and have baggage, we take the kids laptops and they’re expected to do maths daily and then we spend the rest of the time learning from our environment. Maths is the only constant subject because every other subject can be learned through the community.

What About Homeschool Exams?

Your child can still sit GCSEs or A’Levels if they wish and at whatever age they want. It is common for homeschool kids to stagger their exams over a two year period and to have sat them a year early. You are responsible for enrolling your child at an exam centre, finding the correct exam code/body and paying for them to sit the exams. This can be a big financial burden so you must consider it. Each exam can cost from £100-£350. Usually, these are free if your child was in school but you take on the full burden of every educational need.

Aside from GCSE/A’Level, there are other accredited courses young people can sit too. The American SAT and AP exams are much cheaper, easier as they’re multiple choice & can be used as university entrance points.  Your child can also complete vocational qualifications like a BTEC online and through centres. Functional Skills is a much cheaper alternative to GCSE English & Maths & NVQ Level 1-5 (City & Guilds) are available in more than 1,000 subjects and are usually completed whilst in an education or work setting or as part of an apprenticeship although some can be done entirely online.

There are also other exams which can prove competency in other areas. For example LAMDA (drama & speaking), NICAS (climbing) & ABRSM (music).

There are many possibilities but sadly the UK is indoctrinated into believing that GCSEs (which very few other countries use) & A’Levels are the only method of learning and being qualified.

There are plenty of misconceptions about homeschooled kids which seem to be relentlessly aired on mainstream media and sadly from our government too.

Some of these viewpoints include lazy or abusive parents, children lacking IQ, children being too badly behaved for school, parents raising ‘stupid kids’ and parents being selfish.

Some of the reactions we’ve encountered towards homeschooling further our opinion that kids educated outside the mainstream norm are more open-minded, more resilient, more able to adapt to change, more able to entertain themselves, less likely to be bored, more self-reliant, lifelong learners and more able to complete independent research.

Here Are 20 Reasons Why We Unschool, Homeschool & Worldschool

I can think of at least another 20 reasons why we homeschool and why I disapprove of mainstream education but I feel you’d be too bored to read any further, so here are 20 reasons why.

Do You Need To Be Educated To Homeschool?

You do not need to be educated to homeschool but it helps if you are. Intelligence and being educated are not exclusive so if you didn’t do well at school, don’t be put off homeschooling.

You will need to be eager to learn new subjects, be prepared to challenge everything you think you know and be able to research and process information. You are not your child’s teacher instead you’re there to facilitate their learning process.

In my experience parents who try to enforce a classroom setting at home do not succeed in their journey as well as parents who are more open-minded to the learning process happening anywhere and anyhow.

Children learn best when they’re happy, having fun, feeling valued, being included in their own learning journey and when they’re inspired to achieve.

Add this board to Pinterest with this image. If you’re looking for travel inspiration, check out some of our boards too. 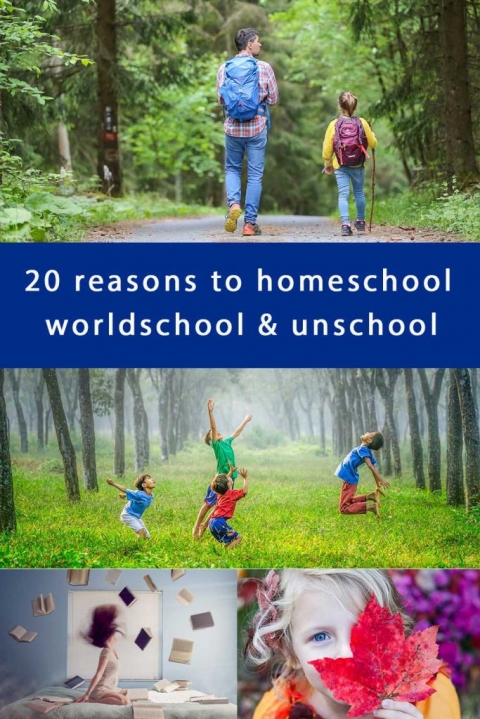 Spread the love
Posted in UK
« Sunshine In December: Where To Travel To
The Saqqara Pyramids: Don’t Make This Mistake When Travelling Egypt »