The Saqqara Pyramids: Don’t Make This Mistake When Travelling Egypt

When Did This Happen?

We spent two weeks travelling the length of the Nile in Egypt in 2019 –  ironically two months before they really started excavating the Saqqara Pyramids site.  Backpacking Egypt was a very challenging experience where it was near on impossible to tour sites yourself without an official tour.

We don’t like tours. We detest being herded around with a group of people and not being able to explore or learn at our own pace. Tours are too time-pressured and the result is frustration. We especially loath being pushed onto big, smelly coaches and trotted around at somebody else’s whim.

So we decided to do it ourselves and called an Uber.

Catching Uber in Egypt was an experience in itself because none of the drivers could map read. Despite having a map, on their dashboard, in front of them, they couldn’t map read. Instead, they’d pull over and hail down passers-by to ask directions.

Our Uber driver had never heard of the Saqqara Pyramids let alone know where they were. So I downloaded offline maps and tried to map read. The problem was a) he didn’t believe me and b) the main road to Saqqara hadn’t been built so we had to take dirt roads around the back of the Pyramids.

After an exceedingly long, emotionally painful and bumpy ride we reached the back of the Saqqara Pyramids only to find the road blocked with a swing bar. I got out of the car to lift it up only to have a group of Egyptian men run at me with their guns out.  In order to stop terrorism (or so they say) they had blocked the roads to prevent entry to the car park.

We managed to buy some tickets to gain entry although this apparently didn’t include photography or something and there were no signs to tell us what we were seeing. I had taken a guide book with me along with some notes from other people but it was all very lacking.

I’d imagine that now it’s been excavated and the significance of it known, it is far better known and of course, there’s a brand new road leading there and you can now visit inside the pyramids which you couldn’t when we went.

What To Know Before You Go

The Saqqara site is located roughly 30 km (19 mi) south of Cairo and covers an area of around 7km by 1.5 km (4.35 by 0.93 mi). It is large, hot and dusty and you should be prepared for winds and dust. We found it easier to cover our faces with long scarves.

There was a toilet on-site (in an old wagon on wheels) kept immaculately clean by a man who gave us toilet paper, although we already took our own.

Map of the two different sites.

What To Wear At The Saqqara Temples

Egypt is a staunchly Muslim country and women should aim to keep themselves covered from ankle to elbow. Women should wear something that covers their legs, the majority of their arms, their shoulders and if you don’t want attention, your hair. I’d recommend trousers rather than a skirt because it keeps you safer & you can potentially remain genderless (if covering hair).

Men should wear trousers but short sleeve t-shirts are ok. The rules are not as strict as for men but you should avoid wearing shorts or singlets. It is disrespectful to their culture and you just won’t be taken as seriously.

Saqqara is a large and ancient burial ground which served as the necropolis for the ancient Egyptian capital, Memphis. Memphis was the ancient capital of Inebu-hedj, the first nome of Lower Egypt, currently located near the town of Mit Rahina, 20 km (12 mi) south of Giza.

There are a number of pyramids on the Saqqara Site. It’s estimated that sixteen Egyptian Kings built pyramids there which are currently in various states of preservation. High officials added private funeral monuments to Saqqara during the Pharaonic period and it remained an important complex for non-royal burials and cult ceremonies for more than 3,000 years. This is well into both Ptolemaic and Roman times.

In order to get a better understanding of the site, it’s best to start off at the Imhotep Museum to the east of the site.

The Imhotep Museum is dedicated to the Egyptian architect, Imhotep, 2700BC. There are five halls within the museum with a variety of presented displays from throughout the necropolis area.

The Stepped Pyramid Of Djoser, Saqqara

The most famous pyramid at Saqqara is the step pyramid of Djoser which was built during the Third Dynasty.

The structure has 6-tiers and 4 sides and is the earliest colossal stone building in Egypt. It was built in the 27th century BC for the burial of Pharaoh Djoser. It is considered to be the earliest cut stone manmade construction and is the central feature of a mortuary complex surrounded by ceremonial structures and decoration.

Originally the pyramid was bigger, measuring 62.5 metres (205 ft) in height with a base of 109 metres (358 ft) and was clad in shiny white limestone. When we visited in 2019 it was still looking a little decrepit but in March 2020 the pyramid was reopened for visitors after a 14-year restoration.

27 coffins were found nearby in a newly excavated 11-meter deep chamber. If you want to see more colourful sarcophagi decorated with legible Egyptian hieroglyphics you can watch the new Netflix documentary on the Secrets of the Saqqara Tomb.

What Else To See At The Saqqara Complex?

Other pyramids in the area are Unas, Teti & Uskeraf and the temple complex of Heb-Sed.

Unas looks a little squashed and dilapidated. It was first opened in 1881 and to the south-side, there are three shaft tombs of the Persian period. There are a number of other tombs in the area, mostly wives and to the east is a Monastery.

Uskeraf is a rather large mound of something that looks vaguely triangular shape but really it’s in a poor condition. It was founded in the Fifth Dynasty and was originally roughly 7 metres wide.

Teti, founded in the Sixth Dynasty, is even more derelict and looks nothing more than a large mound of sand. If you encountered it somewhere else you’d be forgiven for thinking it was just a hill.

Whilst You’re In The Area

The nearby sites of Dahshur and Abu Sir are relatively close by and contain the Step Pyramid, the Bent Pyramid and the Red Pyramid. We did not make it to these

There is a lot to see here but sadly we only saw a fraction of it because the site was so disorganised and we had no idea where to go or what we were seeing. The site might be better know that it’s had millions of £ spent on it but I’d still advise getting a tour guide and a driver.

We spent two weeks in Egypt following the Nile from Cairo down to Abu Simbel.  If you’re looking for things to do in Egypt, you can follow our journey below in the Relevant Posts.


Get Cheap Flights to Egypt

Although we caught the ferry from Jordan to Egypt, we flew out of Marsa Allam airport on the east coast.

You can book cheap (usually direct) flights through Skyscanner although Kiwi is also a good resource for cheap indirect flights.

Pin This Post On The Saqqara Pyramids In Egypt 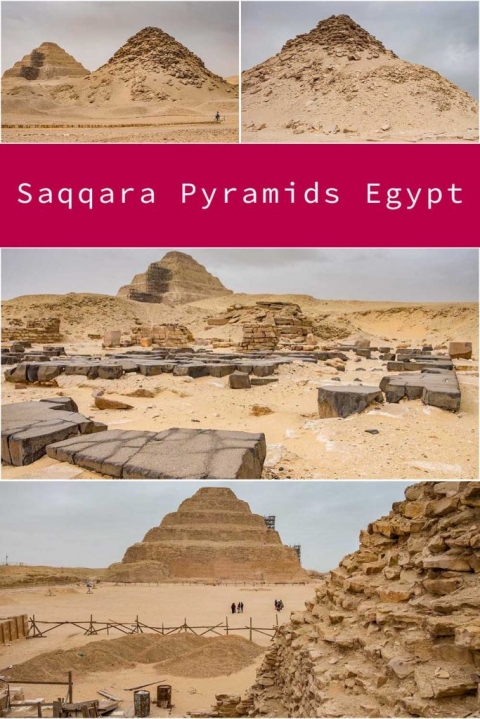 Spread the love
Posted in Egypt
« 20 reasons Why You Should Homeschool, Unschool & Worldschool
1001 Things To Do In Liverpool On A Long Weekend »