Aguateca Ruins; Off The Beaten Path, Deep in the Jungle of Guatemala

For the truly adventurous among us, who really want to see a secluded, off the beaten track Guatemala, you can visit the Passion River, Petexbatun Lagoon and the ruins of Aguateca which perch 90m high on limestone ravines. To the west of Flores, you may be the only travellers here but watch out for those pesky monkeys and maybe a few crocodiles too.

How To Get To Aguateca

Lost in the rainforest, almost undisturbed by recent human presence, Aguateca is accessible only by boat.

You’ll need to travel to the town of Sayaxché, find a boat that will take you 30-40 minutes down the Passion river across the (possibly flooded) Petexbatún Lagoon until reaching the steep banks of the Aguateca settlement. Of course, if it’s dry season you’ll have to do a bit more trekking to get to the site.

If you’re the type of budget traveller who relishes adventure, this is definitely something you need to add to your to-do list! Read on, for how we booked a guide to take us there from Flores and organise our day for us.

When Was Aguateca Built?

The first settlements at Aguateca date to the Late Pre-Classic period (roughly 200-350 BC) where it was once the capital of a powerful dynasty that descended from Tikal.

The site was at its peak between  600-810 AD (during the reign of  Tan Te’ K’inich) when it was attacked, burned and quickly abandoned. It is said to be one of the best preserved sites in Guatemala and it is definitely worth a visit.

You’re unlikely to encounter any other people here and you’ll have the entire site to explore alone which is both exhilarating and a little creepy.

Only for the truly adventurous is Aguateca, in the heart of the Mayan jungle surrounded by ravines & water Click To Tweet

Despite sitting atop a huge limestone cliff with hefty ravines, there is an extensive system of defensive walls that surround the city, reaching over 3 miles (4.8 km) in length.

The city’s centre consists of the Palace Group (probably a royal residential compound) and the Main Plaza. These monumental complexes were connected by a causeway, along which was a densely occupied elite residential area.

Walk Through The Main Plaza

The Mayan culture strongly emphasised  both the visibility of rulers and theatrical performance. The large plaza at Aguateca appears to have been designed to accommodate a large number of people (it’s impressively big) and probably held the majority of the community members on ceremonial occasions.

Prominent representations of rulers on stone monuments were also placed in plazas. In the Aguateca plaza there are at least two large stone monuments although I’m unsure if they’re actually genuine or just replicas. Either way, it gives us a good representation of what life might have looked like.

The presence of multiple plazas of varying sizes suggests that theatrical events also divided the community, separating those who were allowed to participate in exclusive performances from the less privileged. And I though Britain was hierarchical!

Found at the site, a 6 metre (20ft) tall temple appears left unfinished, the centre of the city seems to have been destroyed by fire, valuables were left scattered in elite residences and ceramics were found in their original domestic positions which demonstrates the probable sudden abandonment of the city. You can get as close as you want to the ruins, respectfully sitting and touching them. Have a look at some of the inscriptions on the stones too and see if you can work out what they mean. Kids will love these ruins as you can get up close and personal with hands on world schooling.

One structure that was discovered has been identified as a 6 metre unfinished temple. It is believed that it was still in the process of construction when it was attacked and abandoned at the beginning of the 9th century. Its discovery has since provided valuable information on Maya building methods and techniques they used.

It is thought that around 800 A.D, Aguateca appears to have been attacked and the entire city was abandoned.

The Palace Group was found to contain highly valuable goods, such as greenstone beads, carved alabaster and shell ornamentation. This could demonstrate that the inhabitants intended to return for their goods.

Excavations at the Palace Group suggest that the royal family evacuated the center before the attack and that members of the elite remained.  Because of the pattern of destruction and abandonment, it is likely that the ruling elite of Aguateca was the primary focus of battle. The enemies aimed to terminate Aguateca as a political and economic power and therefore succeeded.


How Does It Feel To Visit Aguateca?

Do you fancy visiting this mysterious and eerily charming, abandoned city? Interested in knowing what it’s like to be there? Well, I felt a phenomenal sense of awe and wonder that buildings from three thousand years ago still stand but are virtually untouched by humans and modernity.

Nature has considerately eaten away at the structures leaving a trail of brown roots and green moss covering the bricks. Around you would be complete silence if it weren’t for the hum of bugs and occasional chirp of birds.

Having the entire site to ourselves was amazing, especially after the chaos of Tikal. With the sun beating down on our backs we touched the steps, admired the brickwork and contemplated what life must have been like deep in the jungle, surrounded by dense forest and rising waters. It’s hard to imagine a vibrant community living here now with the spooky silence.

Hiking Down Into Long Lost Ravines

In stark contrast to the heat and humidity of the jungle, descending into the ravines is a cold experience. The temperature drastically plummets by at least 20*c and we started to shiver.

The floor of the ravine drops suddenly and is covered by leaves and mud, adding to the mystery and suspense of wondering what lives in the darkness and damp. Don’t worry, we didn’t find anything.

The air is moist, the fog clings around you and if you let paranoia take a hold, you might just think you’re being watched! I love to creep out our kids with scary stories and let their imaginations run wild. It’s all very safe though!

Learn About The Animals That Live There

Did you know that the first ever medical sutures were the result of ants? Stapling wounds shut, the creatures were affixed to the edges of the wound, which they clamped with their pincers.  In Aguateca, there are giant ants with huge pincers. Unless you stumble into an ant’s nest they’re usually harmful but can be summoned by stamping loudly on the ground.  I was very grateful to Peter for teaching us and the kids about ants; it really does help to take someone with you who’s passionate about home education.

Aside from ants, there are many insects living in the jungle of Aguateca, including beautiful butterflies, lizards, frogs and birds.

Watch Out For Crocs On The River?

Although you won’t see as much wildlife during the rainy season, there’s still plenty to see in the river.

We saw in excess of 15 Great Blue Herons, 20+ Blue Herons, probably 100 Egrets, a plethora of Buzzards and some curious Spider Monkeys. Because it was rainy season we were able to explore all the little side gulleys  that were full of water. It was very exciting to be so close to nature.

Other animals you can see include kingfishers, vultures, eagles and cormorants. You also have the chance to see crocodiles and giant iguanas during the dry season.

Get Cheap Flights To Guatemala

Get cheap flights to Guatemala

Enjoy The Passion River To Yourself…

Do you like solo travelling? For the whole journey to Aguateca we were the only people on the river and lagoon. The waters were flat and calm and we were able to see turtles floating by. It was only on our way back that we saw some men having filled their boats with wood, paddling along in their canoes.

Book A Private Guide to Aguateca

If you’d like to book a guide to Aquateca from Flores. Contact Peter (English)/Yolanda (Spanish) at Zapote Tree Inn Tours (opens in new tab).

If you’re looking for somewhere authentically Guatemalan to stay Zapote Tree Inn is perfect for all travellers, including families. It’s opposite Flores (read our guide on what to do with kids) and has a swimming pool. We had a brilliant time here and Peter and Yolanda welcomed us and fed us too! Great experience for our kids.

Where Should You Stay Nearby? 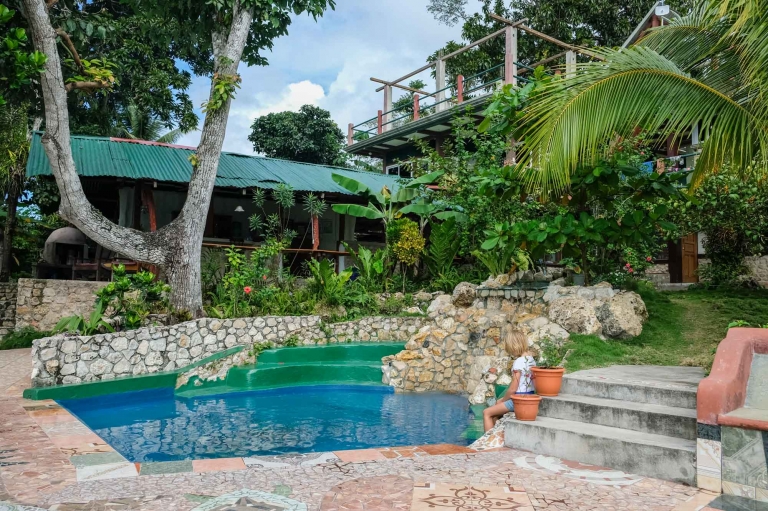 We need your help to grow our blog and get the word out about our adventurous travels and all the amazing places there are to visit in our world. Please consider sharing this post on social media or adding it to your Pinterest board. Thank you!

What Else Could You Do Guatemala?

If you’re looking for other ideas on what to do in Guatemala, please see our other posts. We are still blogging about our experiences in Guatemala, even though we visited in February 2018, so why not sign up to receive our newsletters.

Spread the love
1
Share
1
Share
Posted in Guatemala
« Jordan in Winter: Should I take my gloves?
How to catch the ferry from Jordan to Egypt »