Oh no. We made a BIG MISTAKE. Fishy feet on Corfu

We pride ourselves on being hyper aware of animal abuse and avoiding it at all costs.  Zoos, sanctuaries, parks… pretty much anything to do with animals is actually exploiting them cruelly. So, how did we get it so wrong?

We didn’t do any research. We took it at face value. I feel so foolish so by sharing our experience I’m hoping to save you that feeling too and of course protect the fish. 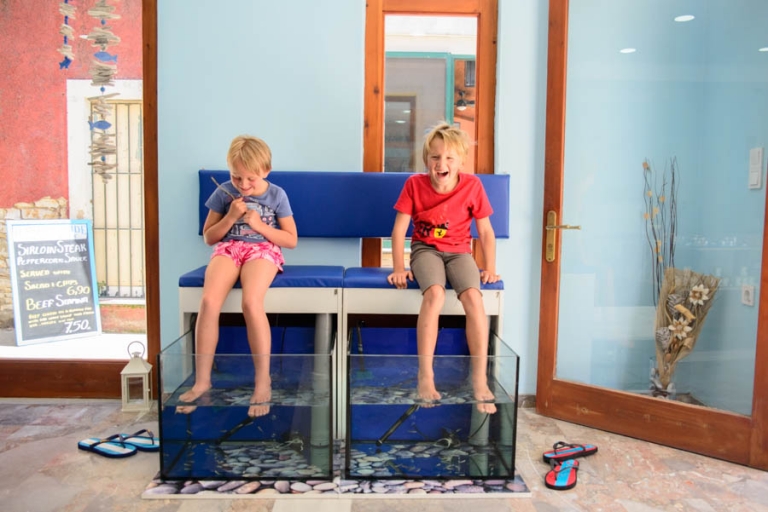 The kids having their feet attacked by fish. Was it a mistake?

When did we visit Corfu?

In May (2017) Rich worked away for 15 days in Australasia, Sophie had some exams and we were trying to recover from a pretty manic time in Seville so we decided to take a holiday to Corfu!

Everyone agreed that we should just take it easy, minimal exploring, lots of yummy food and spend time in the sun having fun.

As a result we only went out a few times and on one occasion we came across a small, family run foot spa that offered fish eating your feet.

These things have been on the high street for a decade at least and were labelled as the best import from Turkey. These tiny fish are great at eating the dead skin from your feet but what I didn’t realise is that they’re effectively starved in order to get them to do so. Shocked? Yes, so was I.

We had no idea and just presumed that the fish were happy and this was their normal behaviour. We made a big mistake and we’re acknowledging that! 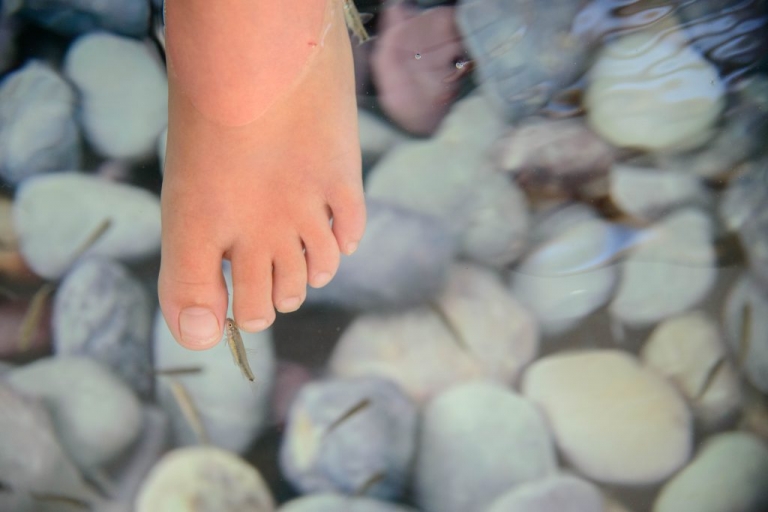 As far back as 2010, PETA advised that the practice was dangerous for humans and cruel for the fish. So, how could we have missed all those warnings? I am still not sure because I have no recollection of ever reading any concerns.

I have read some reports that IF your feet are correctly cleaned before hand, you can minimise the chance of spreading illness to the fish (and our feet were washed with a scrubbing cloth and warm water prior to entering the tank) however you can never combat or overcome the cruelty aspect. 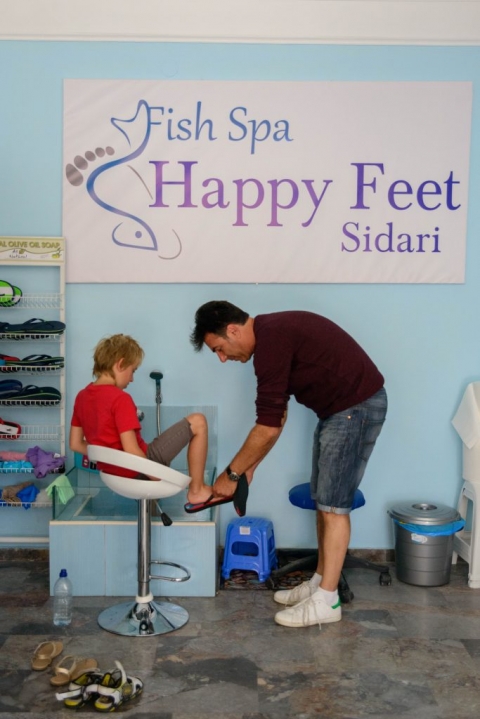 Having our feet washed and then wearing flip-flops/thongs as we walked over to the fish.

The salon we visited was impeccably clean and the man running it was very kind and respectful. I do not want to ‘name and shame’ him in anyway. The fish were not over-crowded and they had oxygen running into their water.

I do not want to abuse the owners of this salon and I certainly don’t want to hear of any direct threats being made to them etc.

In life we all have choices to live as we see fit and to respect the decisions of others even when we don’t agree with them. 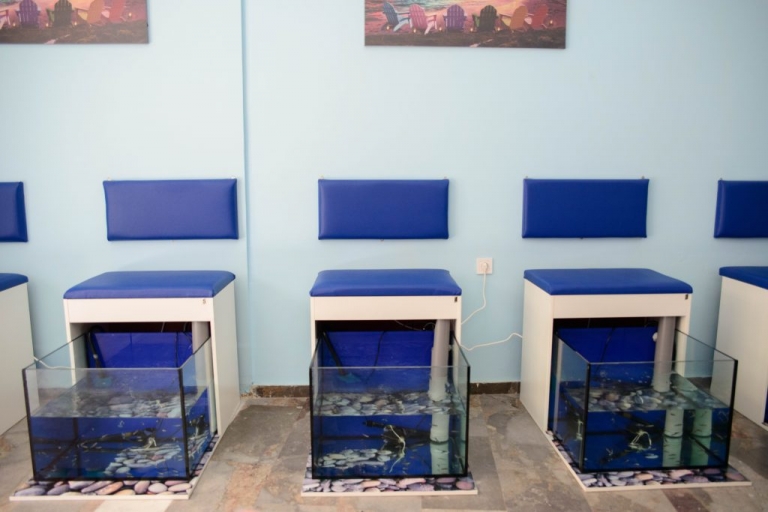 Garra Rufa is the name of the fish which are banned in fourteen US states… not because of the cruelty aspect but due to the risk of passing on disease to humans.

When pedicure tubs are filled with fish, the tubs can’t be sufficiently sanitized between customers and there is no way to disinfect the fish themselves. The water is also a fertile breeding ground for bacteria, as noted in a report by the U.K.’s Centre for Environment, Fisheries & Aquaculture Science. The report stated that even the tiniest cut can quickly become infected when exposed to bacteria thriving on fish scales or waste.  They are also cruel to animals because the fish who are used must be starved in order to make them eat dead skin for sustenance.

The RSPCA has also highlighted concerns regarding water quality saying that oxygen levels as well as chemicals such as amonia and nitrite affect the fish. Toxic chemicals from toiletries, nail varnishes and feet cleansers may be toxic to the fish.

Overcrowding fish in a small volume of water will lead to increased concentrations of ammonia, which will affect the health of the fish. Fish should also be provided with adequate shade from bright light and shelter to escape aggression from other fish.

One site claims that up to 50% of the fish die whilst in freight and that many fish are caught illegally in the wild and bagged up for sending. Other fish are exploited during breeding in unsanitary and cramped conditions. Some die from being denied their natural eating habits, so that they will eat as much human flesh as possible.

Having your feet nibbled by fish in natural rivers in Turkey is miles away from trapping fish in bowls and tanks and then using them to make money.

Did we make a mistake?

Oh gosh yes! We will never have a fish pedicure again. I feel awful for not knowing and potentially subjecting those fish to more agonising conditions.

It’s ok to akcnowledge when you’ve made a mistake, in fact it’s a great thing, and we’ll never make the same mistake again although I suspect we’ll make plenty more along our life journey!

Spread the love
12
Shares
12
Shares
Posted in Greece
« Can I afford to travel Montenegro?
What if I don’t have a photo? Getting a Cambodian Tourist Visa »