Did we catch the last bamboo train in Battambang?

One day whilst I was aimlessly surfing wastebook (cough aka facebook), I came across a video of a bamboo train (also called a Norry) that rattled noisily and quickly through the lush Cambodian countryside. It looked so much fun that I decided we should go!  It was a bit of a whimsical decision but it worked out well and it wasn’t too far from Siem Reap where we were planning on staying.  We caught a bus over to Battambang and stayed on the outskirts of the city for about four days. 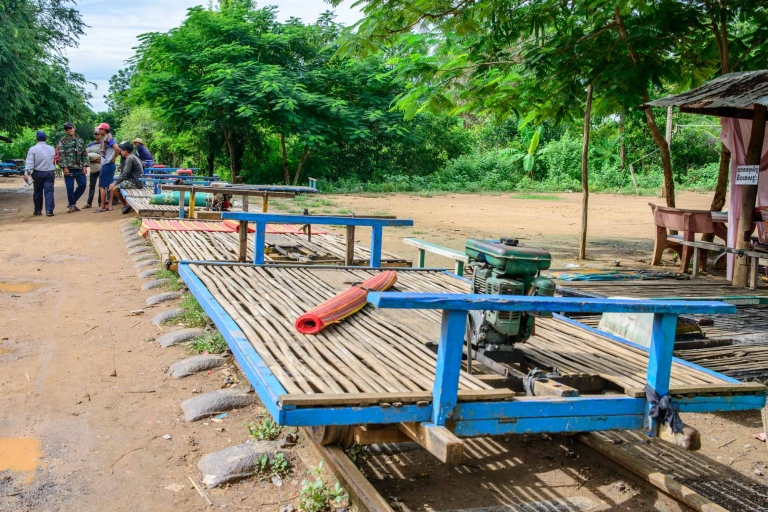 A norry is the word that they give the train which was nicknamed ‘Cambodia’s bamboo train’ by Lonely Planet.  Norry or Norie as it’s sometimes written may come from the Khmer language but might also be from French colonial times.

The trains are made up of bamboo and wooden pallets set atop axels and steel wheels. Whilst cars, lorries and motorbikes were expensive and out of reach for most working Cambodians, the norries were an essential component of daily life.

Powered by a small lawn motor engine which sits atop the train, they were once used to transport goods and livestock around the countryside as the real trains stopped running during the Khmer Rouge’s reign. 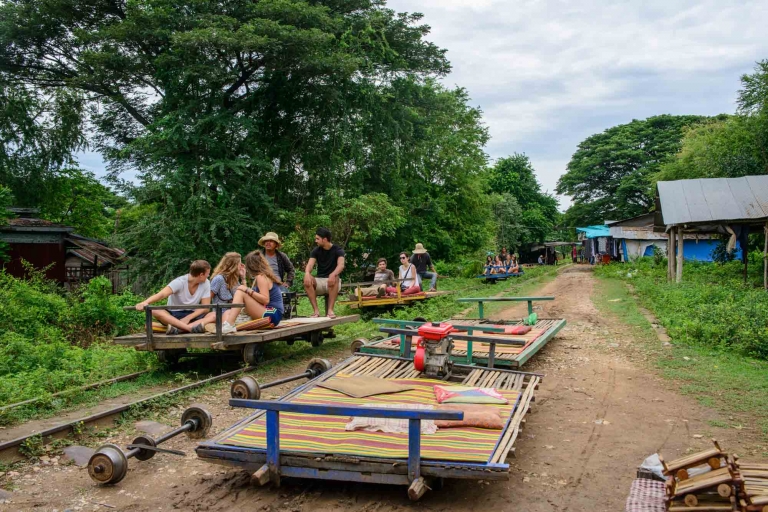 The train network around Cambodia was originally built by the French colonial government however after the Khmer regime the train lines became abandoned.

In 2006 the BBC reported that there was only one scheduled train service per week and it ran at not much more than walking pace. I think Chinese involvement in Cambodia is helping to bring them a train line. 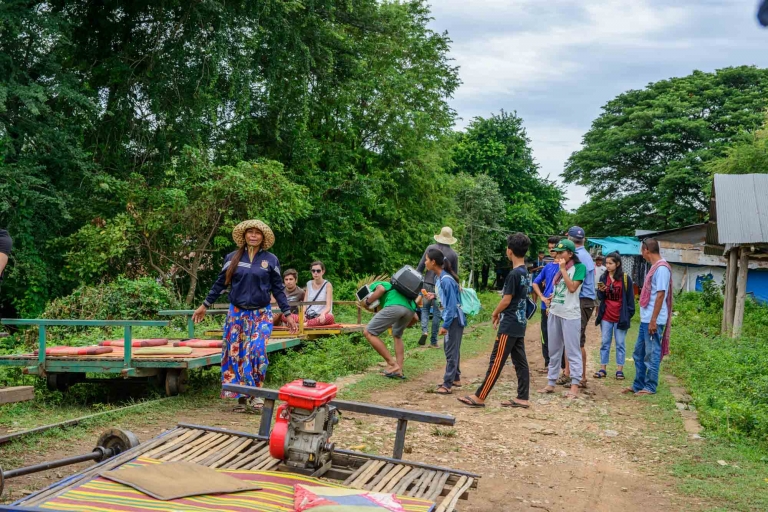 Re-location of the train

By October 2017, I heard from other travellers that the bamboo train was no longer in operation due to the new rail line that connected Thailand and Cambodia.

I have read that the bamboo train has been rebuilt near Wat Banan and that it opened in January 2018. 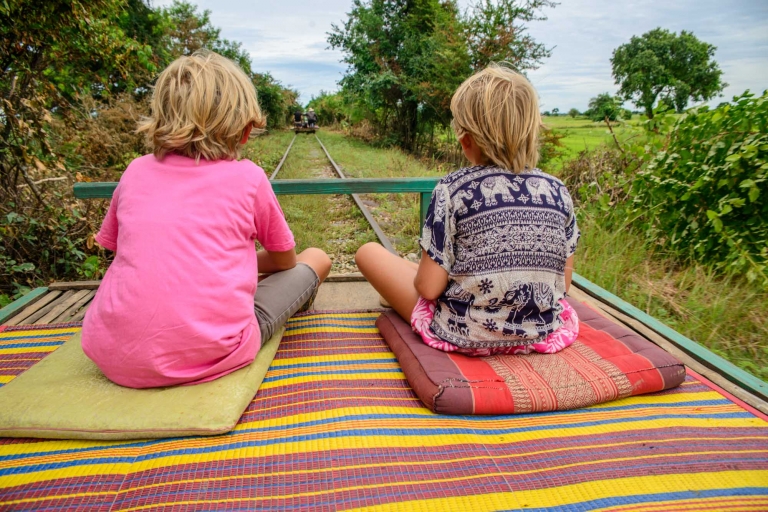 The kids sat on their cushions

A round trip on the railway took us about an hour and costs $10 pp.

The train was previously located at O Dambong (and this is where the Google Map still marks it as being) however it has moved to a new location, roughly 20km out of the city.

I appreciate that it’s a longer drive to get there now but it really is fun for kids (and adults), great for understanding culture and survival and crucial in supporting local economies. 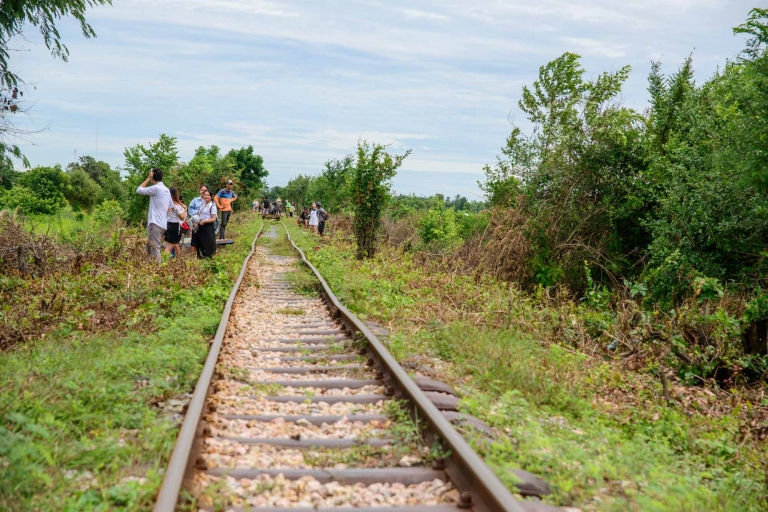 I am not sure of the exact location of the new train as I cannot find it. However, the line starts near the base of Phnom Banan, shown below.

The new train track ends roughly 4km away at Chhoeuteal commune before returning.

Phnom Banan is at the top of a BIG hill and the only way up the 500+ steps is to walk. Once at the top though you’re rewarded with five temples built in the 11th and 12th centuries.  It’s quite a sight so high up and definitely worth the effort it takes.

What speed does it go?

We went on it in the old location at O Dambong and the track was about 7km long. We reached speeds of up to 50km/h. 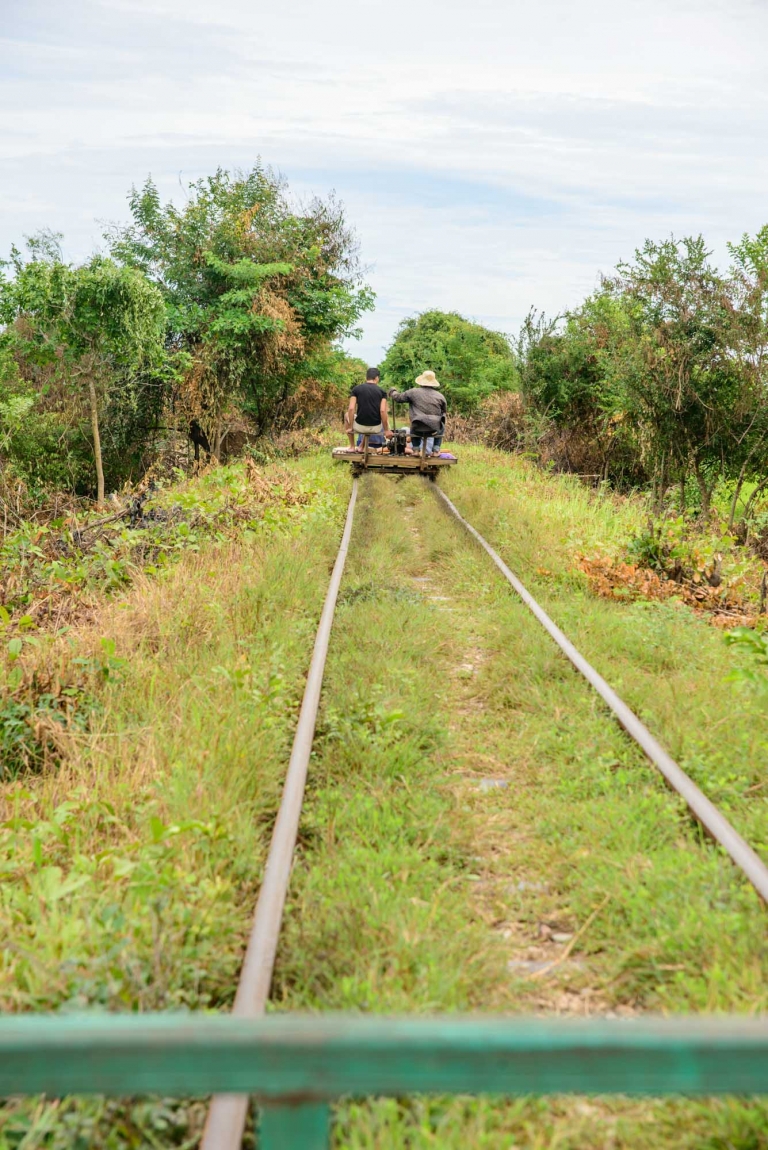 You might have noticed that the train track is only single gauge. That means that when another train approaches from the opposite direction, one of you will need to move aside or reverse, down the entire track!

At the start of our trip we were only a few minutes in when we encountered a Norry approaching us. Our driver, Vanny, reversed (or was pushed) all the way back to O Dambong  to allow them through.

A little while further down the track, we encountered a norry coming toward us. A quick head count revealed there were four on our cart and two on theirs which meant that they climbed off to let us pass.

Our drivers removed the bamboo and metal top from the train and then dropped the wheels and axels in the grass beside it, allowing our train to pass slightly before they replaced the bamboo train on the tracks. 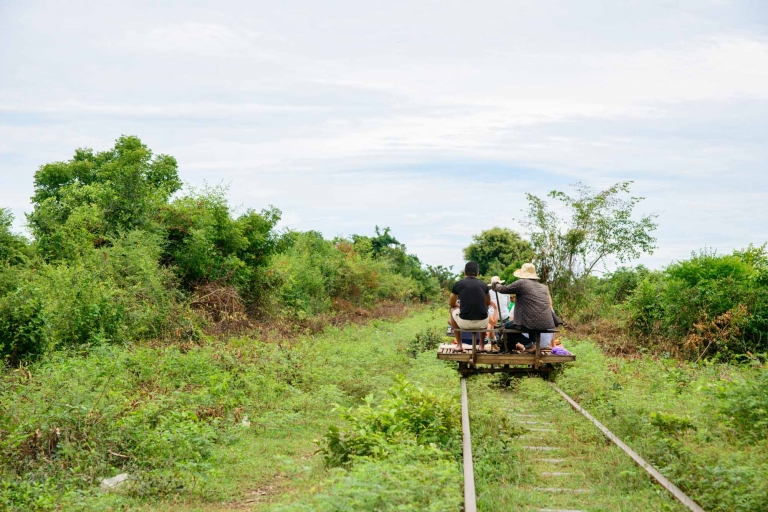 Half way up the train track we noticed work teams flattening what could have been a road. Our train driver spoke good English, way better than my Cambodian, but I couldn’t understand if she was saying it was the new train track that was being built or a new road.  In turned out to be the new rail network line which has subsequently pushed the bamboo train from its original location. You can see how it dwarfed the Norry train from the photos below.

Either way it signalled the end of the bamboo train and the workers there had no idea what would happen to them in the future or how they would make money. It was a bit of a scary time for them all! 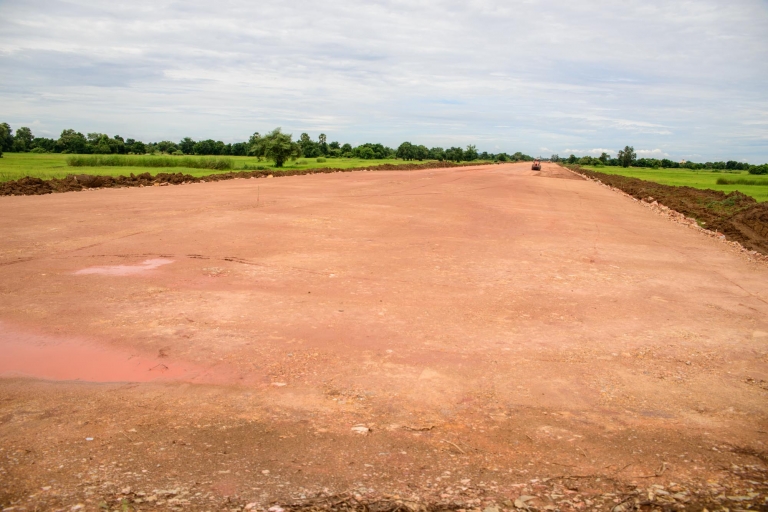 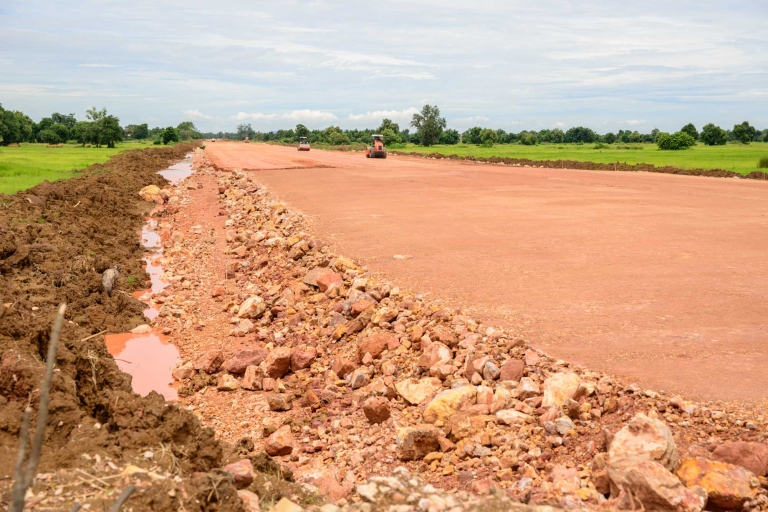 I read the reviews on TripAdvisor before going on the train and of course some were as shocking as always! Here are some of my responses to the feedback:

The train is rural and it’s these guys livelihoods. Yes, they want you to buy merchandise because it feeds them and their kids! They’re not trying to rip you off or con you, they’re actually really nice people trying to make a living.

Of course, the t shirts they sell aren’t going to be 100% organic cotton or hand woven hemp because they can’t get access to those products. The t-shirts aren’t going to be as good quality as designer labels back home but do you really expect to buy that quality in the Cambodian countryside?

Don’t be an obnoxious tit. These are PEOPLE. I saw some terrible behaviour towards the local vendors and I was appalled at how little compassion and empathy some tourists have. It isn’t a big con, they genuinely just want to sell their merchandise because without sales, they’re reliant on charity and hand-outs! And nobody wants that.

A $5 tshirt can make a huge difference in the life of someone else. We bought a pink, elephant tshirt for Zach and a blue, elephant top for Imogen. Both are still going strong and they wear them with pride.

Tipping is encouraged and we gave a $1. I felt we’d already spent a large amount – about $50 in total but I’m aware that if tourism dries up, these people will have nothing and I do feel a certain social responsibility about that. 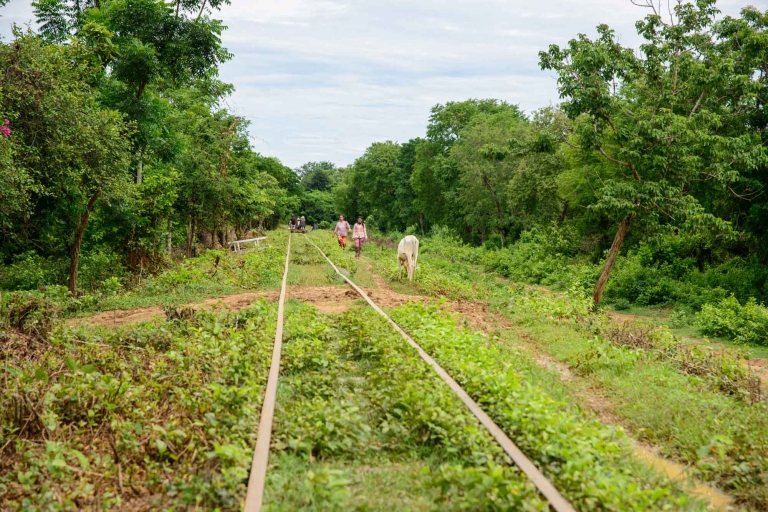 Should you give money to the kids?

My rule is “Don’t give money to kids IF IT’S DURING THE WEEK”.  Because we visited on a Saturday, I gave them some riels and they gave us a hand-made bracelet.

The kids practised their English with us, giggling loudly as they did and we attempted to learn some Cambodian. They were friendly and just wanted to make a bit of pocket money. Fair play to them! 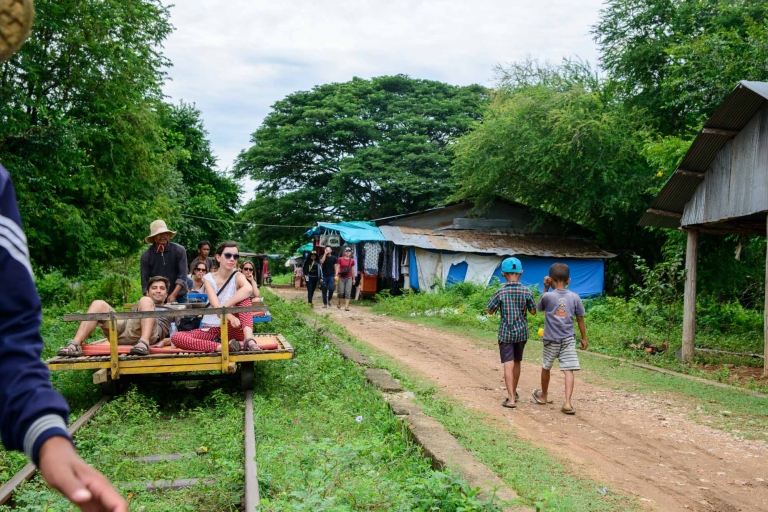 I never felt in any danger and we had a great time.  We were deposited at the train track by our tuk-tuk driver; there were tourist police at the bamboo train and the train itself is VERY heavy. I didn’t feel that there was any chance of it coming off the tracks easily. Our driver was a Mum herself and I didn’t feel that she would take unnecessary risks.

It was a really fun couple of hours but I also felt that we learned about Cambodian culture and got to meet local people. The sellers at the t-shirt stands are welcoming and friendly and we chatted for about 20 minutes and met her kids.

All the vendors were worried about the future of the train but it looks like many might have kept their jobs. 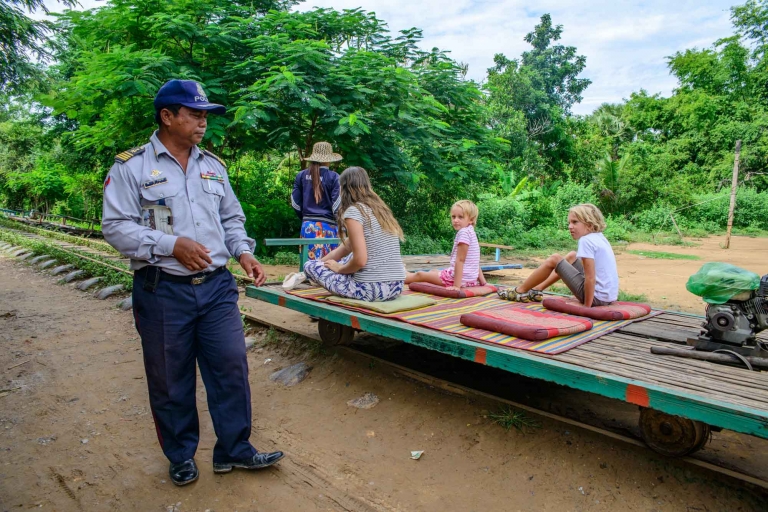 
Videos of the bamboo train

Rather than take photos, I decided to film the entire trip on the GoPro however stupid me also decided to copy those files onto my hard drive and leave it in our storage unit! Hence why I’m publishing this almost a year after we visited.

Scroll down to the bottom of the page to receive our quarterly newsletter.