“What on earth is dining in the dark like?”. This is what my husband said to me. I responded with, “I don’t know but I booked it so we’ll just have to wait and see” “The only thing I know about dining in the dark is that episode from CSI when the man was stabbed with the pen!” If you’re thinking about booking dinner in the dark through Fever, read on for our experience. I promise no men were harmed in the making.

Side Note: Photos are taken with my phone and pretty poor quality. 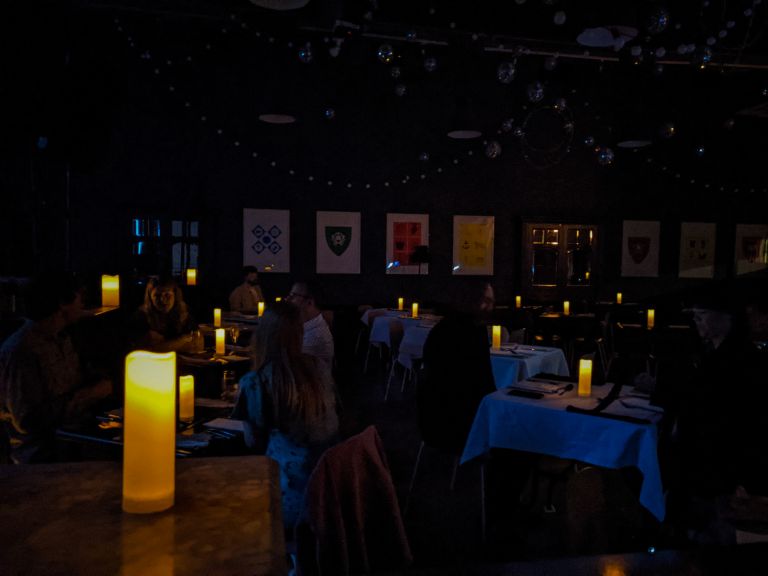 Why Did You Book Dining In The Dark, Fever?

After being cooped up in the house for a year (thanks Covid) I was desperately trying to find something to do that allowed for our strict covid rules. Eating at a restaurant was allowed and so I looked for anything I could reserve that allowed us to spend time out of the house. I was literally that desperate but I wanted something that was a bit different too.

I received a notification from Fever that it was coming to Liverpool for ‘Dining In The Dark’ and I was enthralled. We’ve never dined in the dark and eating in a pitch-black restaurant sounded pretty fun so I paid for two tickets and off we went.

Where Was It Held?

Ours was held in the quirky restaurant Leaf on Bold Street in Liverpool. Leaf is a fantastic place and a really old building that I suspect was once a dance hall. It has large, open wooden floors, a small stage and big windows and is built in an art-deco style. 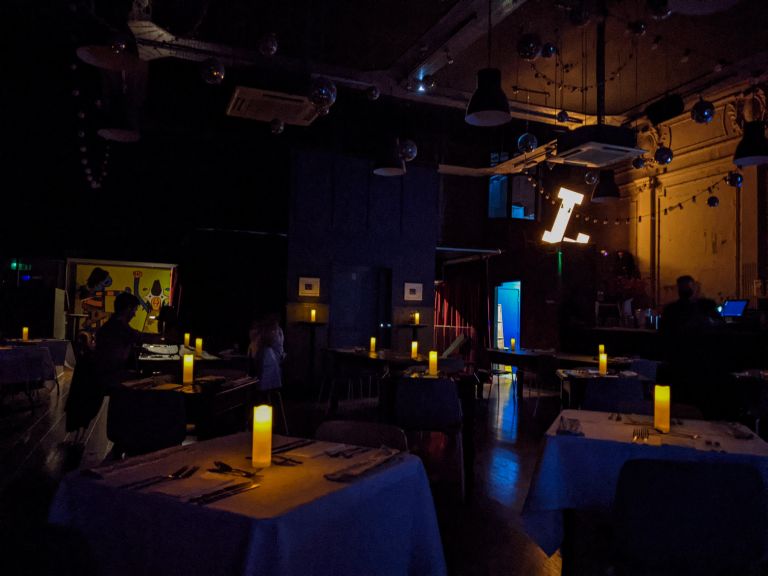 Eating in the dark with Fever

I’m Not Sure About Using Fever

Fever is a perfectly reputable British company, based in London, and this is the eighth time I’ve booked with them. I hope this puts your mind at ease?

The first time I used them was quite a few years ago in London (read that review here) and I’ve never had any problems with them. Their customer service (through phoning) has been great and even through email, they’ve given us plenty of notice about amendments and updates (our venue was changed).

When we first arrived we were led into Leaf and it was very surreal. There were very small and dimly lit table lights to help guide us (and the wait staff) but after that we were instructed to put our blindfolds on and keep wearing them for as long as possible. Obviously, I took mine off to go to the toilet & then I chatted to the two guys behind us for a bit but other than that, I kept it on as long as possible.

Some people didn’t keep their blindfolds on at all and some just tried it temporarily. There was a lot of giggling but it was a lively atmosphere where people were just having fun being out and doing something different.

The restaurant was pretty dark but it wasn’t impossible to see, just in case you’re fearful of the situation. 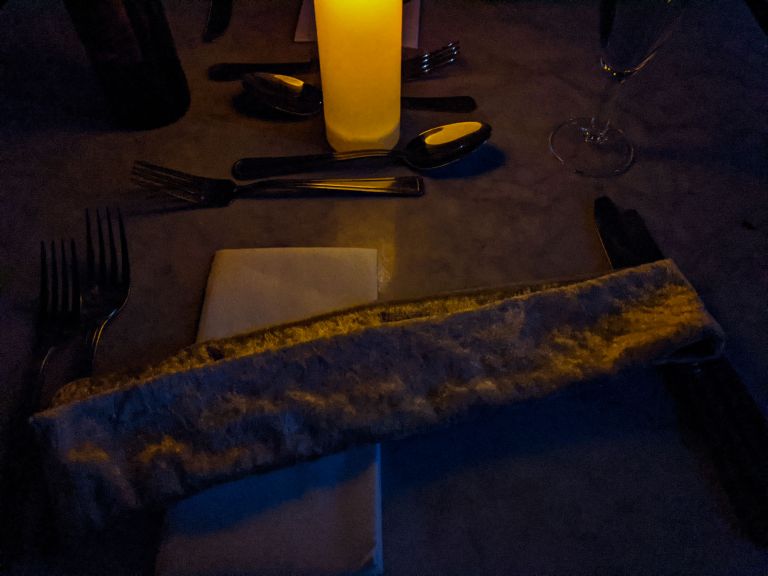 Non-compulsory blindfold that I opted to wear.

Eating In The Dark: What Did You Eat?

We were served three courses and I was full after the first! The portions were enormous and we pre-ordered the vegan option. We ordered an extra drink as just one came with the meal but I wanted another one.

We had a starter, main and dessert and they were challenging to eat in the dark! The dining in the dark menu consisted of jackfruit tacos, north African rice and curry-seitan wraps and chocolate mousse with Prosecco.

The food was utterly delicious and the portions gigantic. Have no fear that you’ll be underfed because I was absolutely stuffed full and had trouble moving. Thank goodness we walked home.

Dark Dining How Did You Cope?

I gave up using my fork after about 40 seconds and started using my fingers. I just couldn’t get anything onto the fork! I have a huge amount of respect for people with partial or no sight now because it is extraordinarily difficult to do.

I did not guess the starter correctly until I’d already eaten one part and discovered more. I initially thought that the jackfruit tacos were dim sum until I stuck my finger inside and realised the filling was accessible.

The wrap was easier to eat but I must have eaten like a pig with the rice; shovelling it into my fingers and then scooping it into my mouth. Thank goodness no one could see me. Or at least I hope they couldn’t

The weirdest thing was that I could hardly taste anything and found it really difficult to differentiate flavours I would otherwise have not thought about. It was very hard to distinguish different tastes and I was really relying on my senses of smell and touch. The wrap was easier to discover, it felt soft but wrapped up and I could feel the layers and the floury texture but the rice contained raisins and almonds which were much harder to identify.

There was constant noise in the room, a real buzz of chatter and laughing. It was great to hear but confused my senses even more. I really relied upon touch to allow me to know what food I was eating. I kept asking Rich “do you know what it is? can you tell what it tastes like?” and I’m pleased to confirm that I wasn’t the only one having trouble.

It was a very surreal & perplexing but ultimately hilarious and fun experience and I’d recommend it to anyone who loves food and wants a giggle. 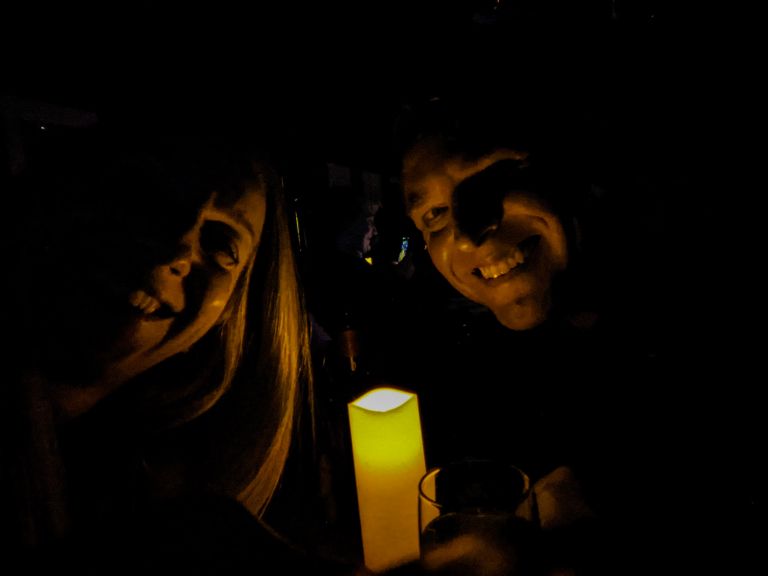 If you’re a huge fan of the American TV series CSI, you’ll remember that on one episode they featured people eating in the pitch black with blind waiters. One man took infrared goggles and one man was stabbed with a pen. I’m happy to confirm that absolutely no one was harmed in this dinner in the dark and that we didn’t eat in the pitch black. It was much more relaxed than that and we didn’t even have to wear our blindfolds if we didn’t want to.

How Much Did Dining In The Dark Fever Cost?

If you fancy eating at a restaurant in the dark, this experience cost us £45 per ticket plus a £3 booking fee. In total it was £96 for the two of us. We wouldn’t usually spend this amount for just two of us to eat out however, justification for spending nearly a year in lockdown was enough for us.

We had fantastic fun, it had been a long time since we’d laughed as much, there was a sense of adventure and surprise to it too.

Book Your Dining In The Dark Fever Experience Here 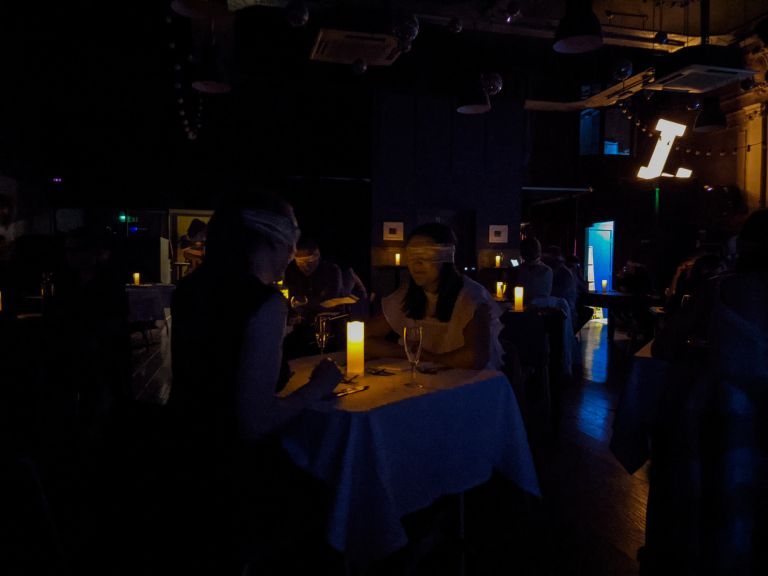 Other people wearing their blindfolds.

A Very Short Video Of Dining In The Dark, Leaf, Liverpool

This is incredibly short and not very high quality but it gives you an idea of what the restaurant and experience was like.

We’re always so grateful when you share and save our posts. Helping our blog to grow bigger enables us to write more posts. Thank you. 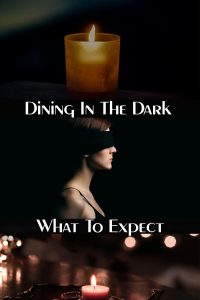