Get your geek on with CSI Las Vegas

From the moment CSI Las Vegas graced our screens, we were addicted! This was WAY back in the early 2000s though when digital TV was just getting started.

However; we could rarely watch an entire season with the episodes in the correct order and without too many spoilers from over the pond, so we bought the dvd box-sets. We still have them – albeit in storage somewhere.

We have great memories of wet-weekend, binge-watching CSI from our suburban (and boring) Hampshire semi whilst wrapped in a duvet. From the safety of the sofa we could watch CSI whilst hearing the torrential rain outside and know that Grissom had our backs! He was our favourite lol. 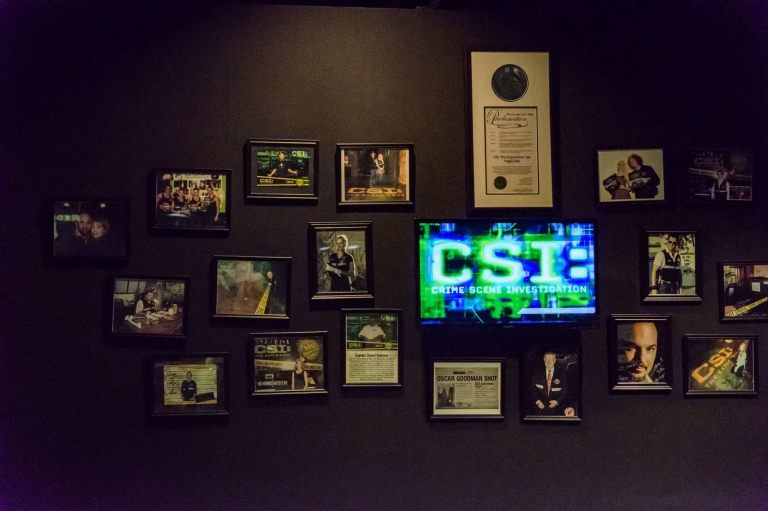 Being in Las Vegas

From the moment we decided to hit California we KNEW that we just had to go to Las Vegas (Nevada is the neighbouring state). All those scenes we’d watched from Lake Mead and the desert, we couldn’t wait to meet Nevada.

At this point we had NO idea that there was a CSI hands on learning experience. It wasn’t until we actually got to Las Vegas and had a spare day that we started researching things to do and came across it. 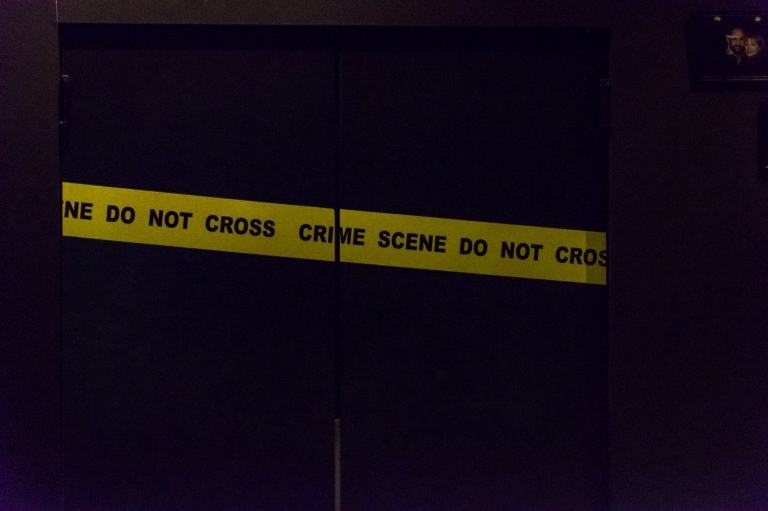 The experience is in one of the biggest hotels in town.

Just off ‘the strip’ is the MGM Grand Hotel and it is HUMONGOUS. I think it took us longer to make our way through the hotel and downstairs to the exhibit than it did to cross the Boulevard.

If you go, you’ll need to allow about 15-20 minutes to get through the hotel at least. If you’re easily distracted allow longer because there are candy shops, bars, slot machines, betting tables, drinks shops, clothes shops, pretty much everything en route! 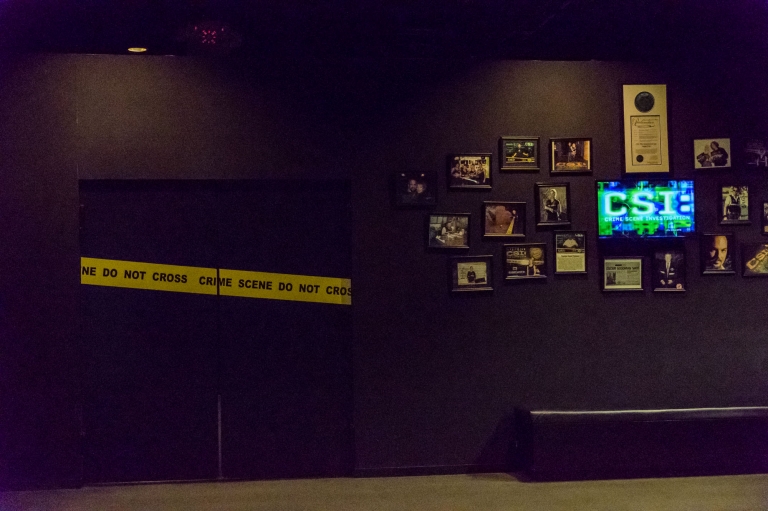 What does it cost?

We paid £81.40/$106.50USD to complete one crime scene. There is no doubt that it’s expensive but what activity isn’t in Las Vegas? Or America?

If I was going as a group of adults, I would be disappointed by the ease of the crime scene however it was something the kids really wanted to do and they had an exceedingly good time.

If we were to return, I would pay to complete the other two. Even though it’s expensive, it’s an educative way to while away a few hours and it doesn’t involve being on the strip! 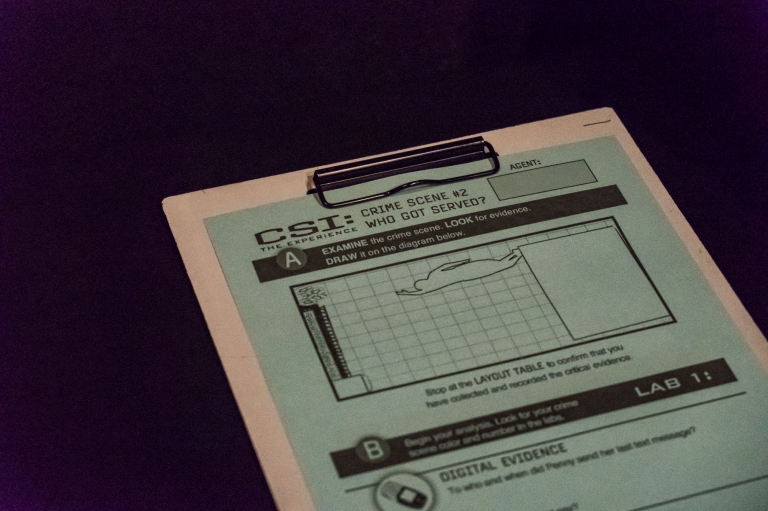 What do you do?

You’re designated a specific crime scene, of which there are three. The easiest is crime scene two which we were given. If you can afford to, I’d recommend doing all of the crime scenes or just use the same piece of paper to slyly do all three.

Whilst in there you’ll walk between learning zones, identifying clues and attempting to solve them. Each section is geared up to learn how to solve the clues using science.

The sections are heavy on words so if your kids are not good readers, they might not enjoy this. There is a lot of information to process – although solving the crime scene is pretty easy. 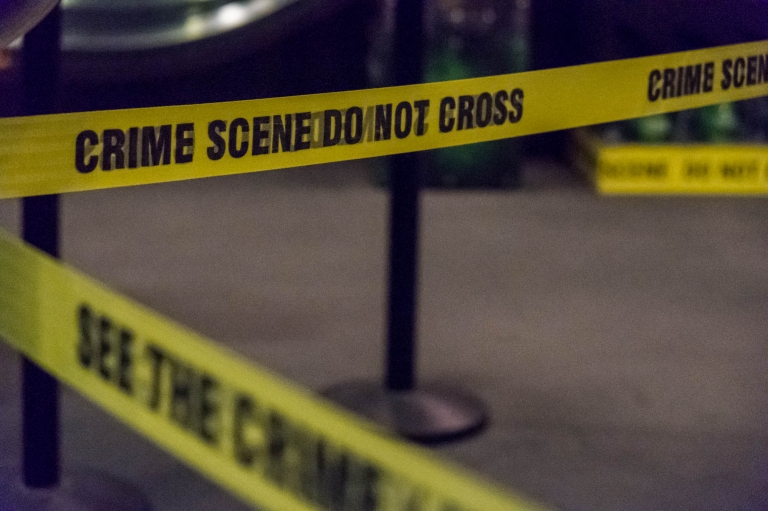 Could the kids participate?

The kids had a great time and were enthralled in learning about forensic pathology.  They were each given a clip-board and a pencil and took notes and made drawings about the crime scene.

They learned about insects, bullets, body fluids, autopsy… and that solving crime is really easy. Hmm! 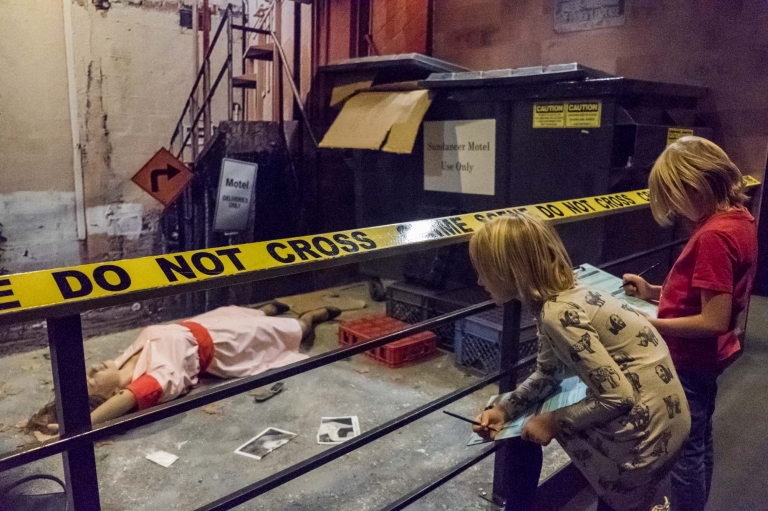 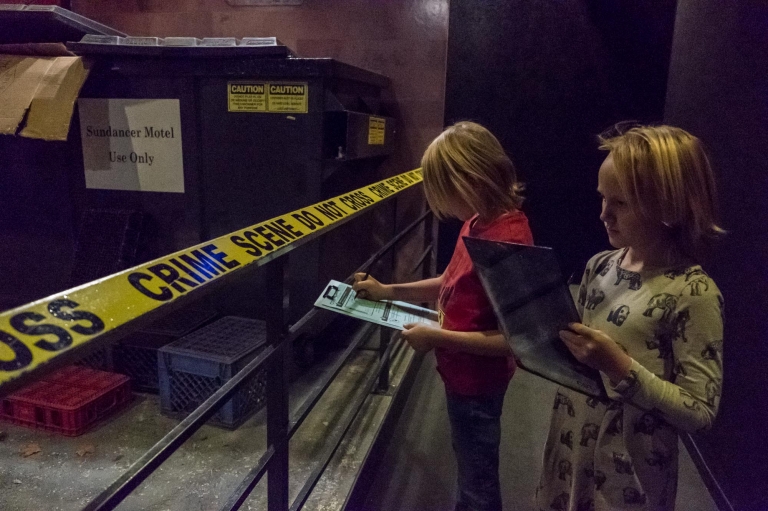 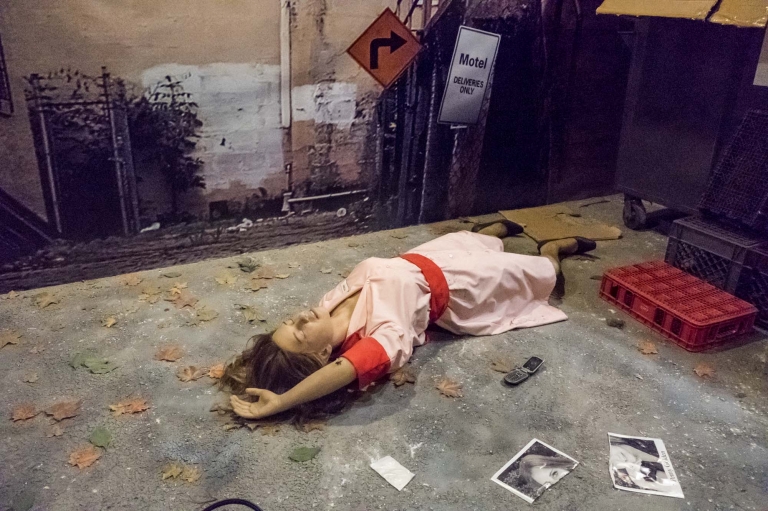 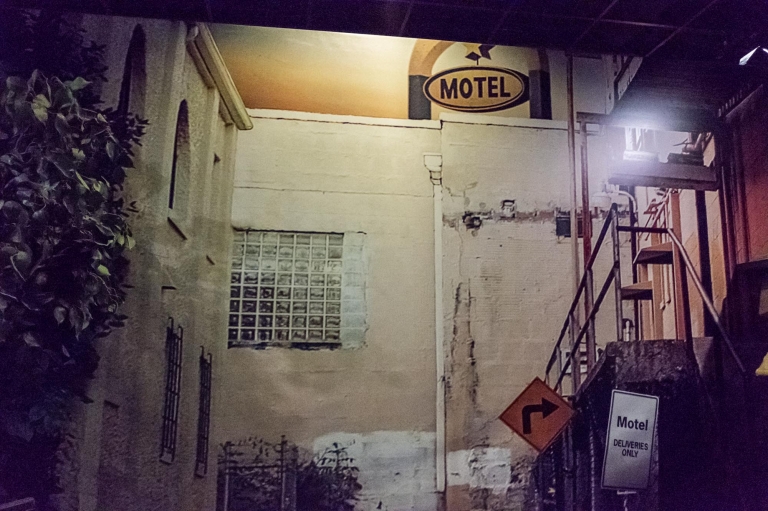 After viewing the crime scene we were free to examine the evidence by visiting different stations. There’s no real order so we just picked the station with the least amount of people – which luckily for us was NONE.

We were alone in completing our scene although there were two other couples completing the other two. I’d recommend visiting during the week and off-season too to avoid the crowds. 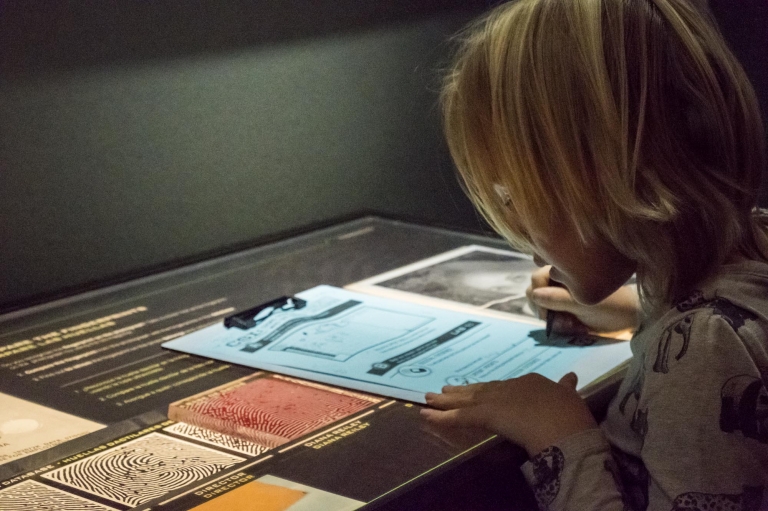 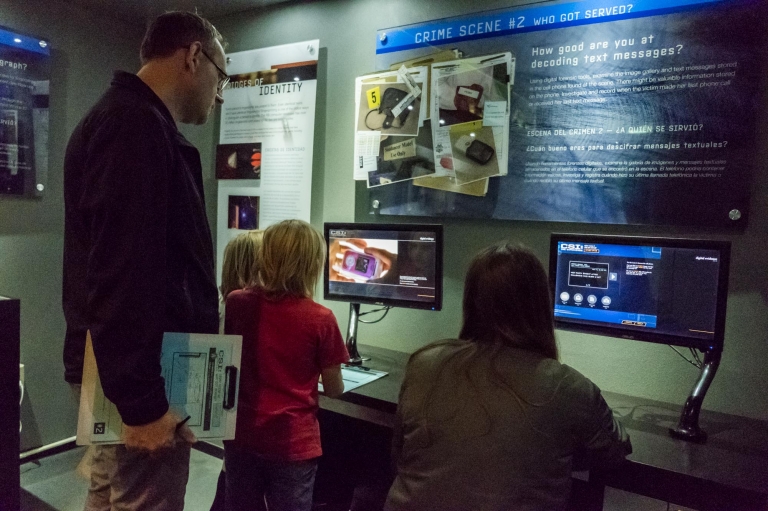 Did we get it right?

The next step was to sit at a computer station and file an official report.

After answering the questions, we watched a video to see if we had correctly solved the crime. We had! 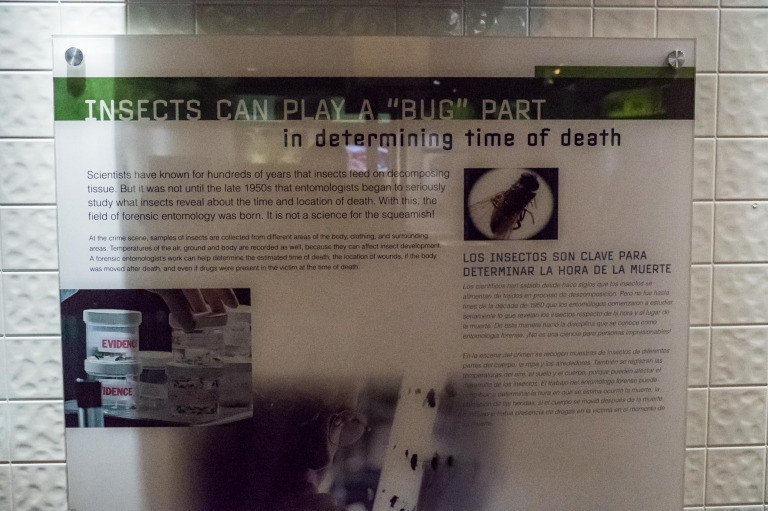 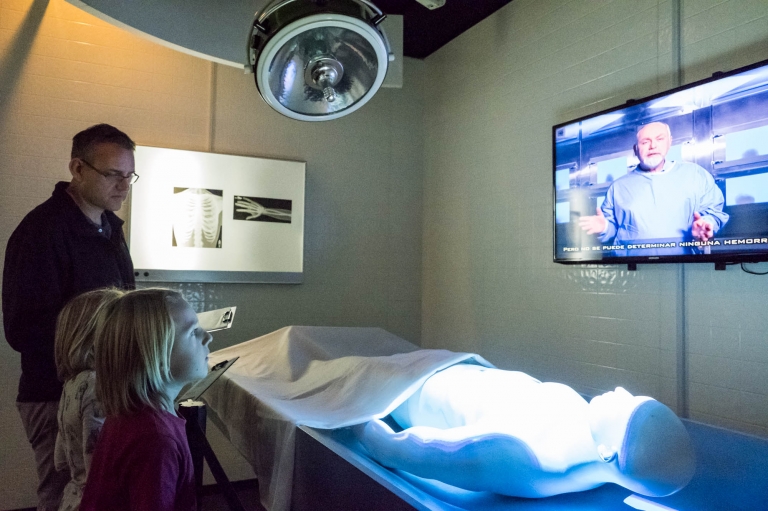 How long to allow?

Allow for about an hour if you have kids who love to read and learn. There is a lot of material that could keep them occupied for ages.

If you do more than one scene I’d allow about two hours. 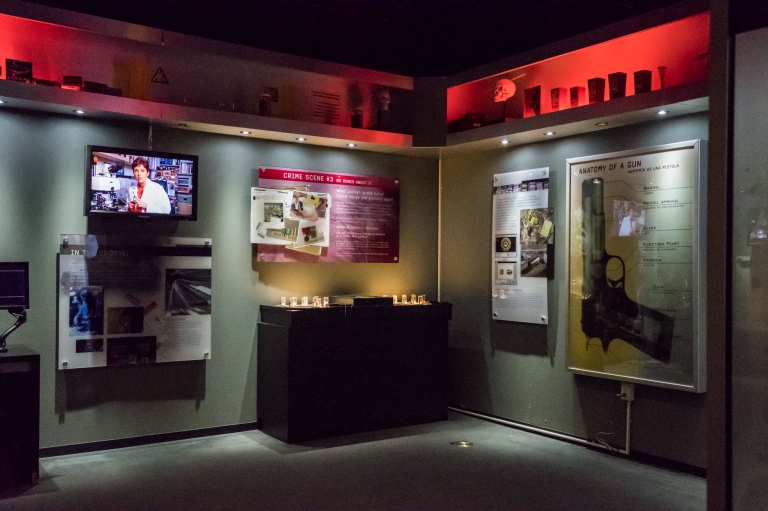 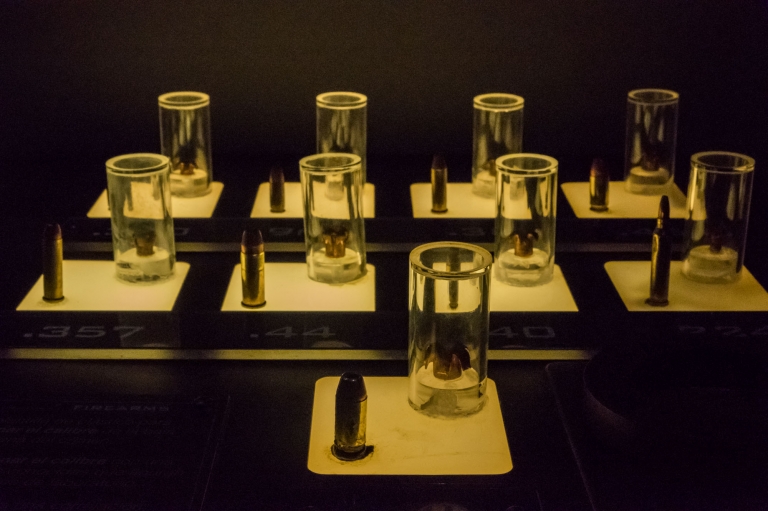 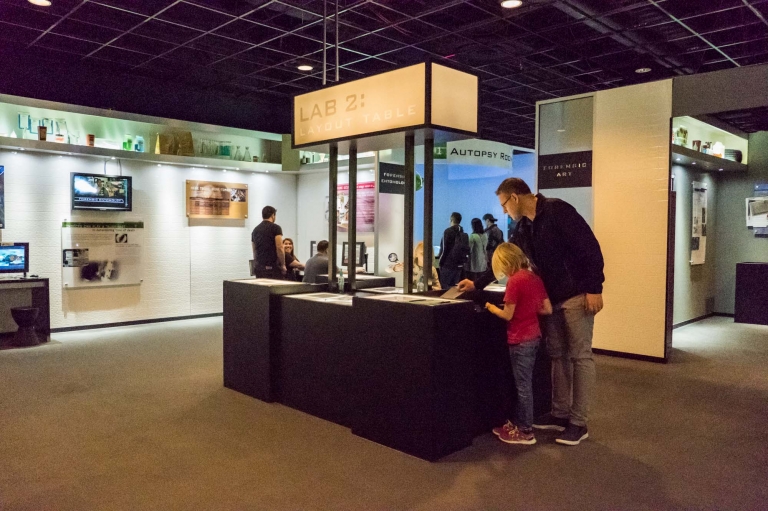 Apart from our once every two year family photos, we don’t take many photos of all five of us so we opted to have a photo taken at the end.

It was an additional cost and it did make the trip expensive! It isn’t necessary to enjoy the experience but we wanted to record the moment. 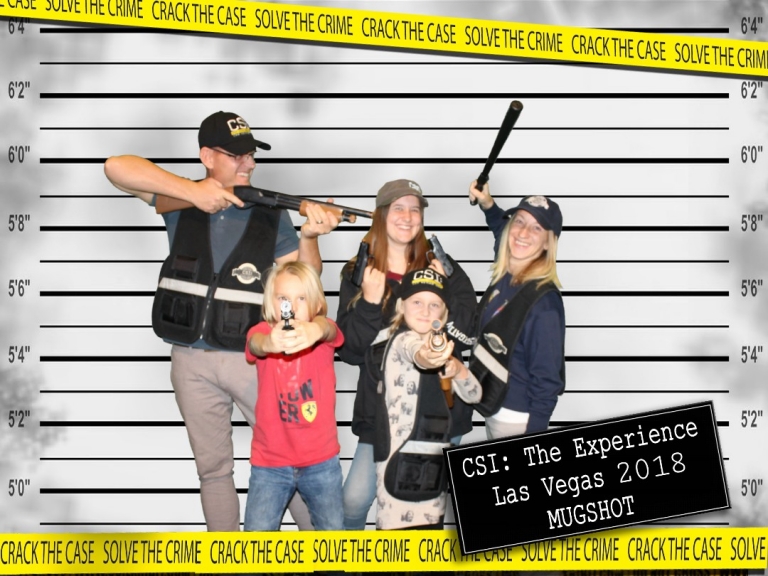 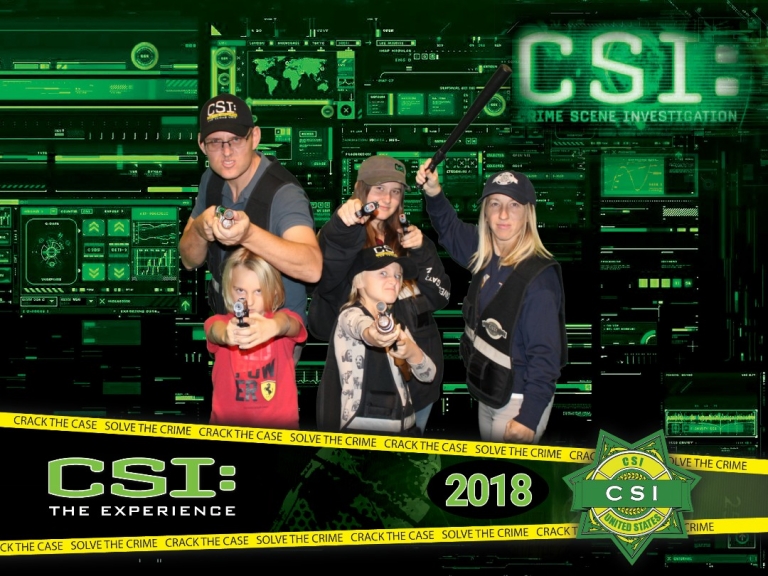 If you’re looking to visit Vegas with kids and want to read this later, add it to your pinterest board.

Spread the love
2
Shares
2
Shares
Posted in America
« Brasov: How to see it from the sky
20 ways to entertain kids around Tarifa »