It is no secret that I despised Egypt and the way it totally fleeced tourists out of money but the Egyptian Night Train was not only exorbitantly expensive but also a total and complete waste of money. I’ll explain why.

I am sat on a narrow, metal and uncomfortable bench seat, crammed up against somebody in an overflowing box of a sweltering room when I hear a woman screaming for money. It’s dark, pretty hot under my jacket and multiple layers and I am hugging my backpack tightly on my knee through fear it may get stolen. This woman is right next to me and is apparently screaming at my husband, Rich, for money because he dared to put his tissue in her bin. Without paying.

The Egyptian cleaning lady has made it her mission to extract money from him and whilst he politely tries to explain why he doesn’t have to pay because he brought his own tissues, she continues in her attempt to embarrass us into paying blood money for our audacity in using her bin.

I’ve had a gutful of Egypt already; dodgy taxis; a supposed 5 hour transfer that took 13 hours; a disgusting rubbish filled trip to The Pyramids (the only remaining wonder of the world); we’ve been harassed; someone tried to steal my camera from our backpack; I’ve been offered every animal riding tour under the sun; we were fleeced at a restaurant, our Uber driver kept getting lost and now this.

Rich doesn’t like confrontation. He doesn’t cope well with it. Everybody is looking at us whilst I attempt to Google Translate why we shouldn’t pay.

This was our introduction to the night train, leaving from Giza station in Egypt.

We were catching the night train from Giza to Luxor and it was late. Fatigued and profusely stressed, twenty minutes later we were being bundled onto the Egyptian night train and met our carriage’s guard; a tall, overweight, sweaty man whose stomach was protruding from his shirt.  He takes my backpack from me and throws it onto the ground with a heavy metallic clunk! Gasping slightly, he looks at me wide-eyed and pretends that our bottom bunk released itself, hit him on the shin and starts crying out “Oh my leg, my leg“. The backpack contains my laptop, hard drives and camera and he knows it!

What a welcome on board. Surely it can only get better, right?

There’s a musty smell lingering in the air. The carpet of dubious brown colour is full of grit and someone outside the cabin I am sharing with my youngest daughter is smoking when there’s a knock on the door. It’s our favourite guard delivering our trays of food. Despite it being close to 10pm someone thought it’d be a good idea to feed the foreigners. No such luck if you’re Egyptian but then you’d have only paid a quarter of what we’ve paid. I am feeling a little peeved already and starting to think it’s an elaborate con.

My vegetarian meal comprises of luke-warm rice, two containers with wilted potato wedges and two bread rolls. I guess they upgraded my daughter’s who gets beef. Certainly not the vegetarian meal we were expecting. It gets sent back, I provide proof I’ve paid for and ordered vegetarian meals and we wait… whilst the train lurches drastically from side to side and somebody else smokes outside our cabin.  This is definitely an ordeal we should have avoided.

There’s a near constant cacophony of knocks at the door; the guard; the husband; the son; the guard… It feels never-ending until the moment I’ve been dreading. “Mum, I need the toilet”.

The scratched silver, metal toilet, with its floor pedal lever, is at the end of the carriage, past three other rooms and a gaggle of smokers in the hallway but there is at least toilet paper. The toilet is shared between eight of us: six male, two female. As I wait outside for her I am wondering if I can hold on all night until we arrive in Luxor. I doubt it. At some point I will need to brave the cold draughts and stench. Although I’m unsure where the stench is coming from as I daren’t look in the toilet which doesn’t actually flush.

The train seems to be travelling at break-neck speeds, ricocheting around the tracks wildly as I stumble around trying to get my leg inside my pyjamas. Our cabin is little more than two square metres wide and the child has opted for the top bunk which means I am on the fold out seats at the bottom. They are as uncomfortable as they look and I am facing the curtains which are at least 2cm too small for the window.

Light flashes past every twenty seconds disrupting my eyes and as I lay there, in the semi dark, I listen to every rattle and squeak whilst simultaneously being thrown around my makeshift bed. The blanket is scratchy on my skin and I try to lull myself to sleep, thinking about absolutely nothing, concentrating on my breathing but nothing happens. I lie awake all night listening to the banging of doors, the Arabic being shouted in the corridor, the loud and frightening squealing of the brakes on metal tracks and I try to forget that I need the toilet. I wonder if the boys in their cabin next door have managed to get to sleep.

It transpires the next morning that sleep was not forthcoming for any of us and that the night train is not conducive to a good night’s sleep.  Arriving into Luxor station we hatch a plan to foil the taxi drivers who incessantly try to pull our elbows and coax us into their taxis. We have already learned the hard way that none can be trusted and despite being exhausted we insist on walking from the train station over to the river where we find a boat to take us across to the west bank.  Dodging the terribly abused ponies and horses is a nightmare and the kids are visibly upset by the way the locals treat their animals. Another ten minute’s walk and we will be there.

It is just after 6:30am when we arrive at our hotel which I deliberately reserved from the night before so we’d get breakfast. Vegan food has been a challenge to find in Egypt and we’re all lacking variety and nutrients. The man on reception cannot find our booking and instead presents me with somebody else’s bill – much higher than what we should be paying. It is not a good start and I am convinced he’s doing it deliberately which rattles my patience further; any means to exploit the foreigners some more. Eventually we sort it out and I pay realising that tax has been further added on to the invoice without me noticing. By this time we are sweaty, dirty, hungry and tired. We just want breakfast, an hour’s sleep and to wash the grime from our faces.

We survived the Egyptian night train but our experience was not favourable and will definitely not be repeated again. I wonder why tourists believe that the day trains are not safe for them as the reality is first class is a fraction of the cost, with a great view out of the window. The Egyptian night train was a stark reminder of how a country can promote fear and exploit tourists for money.

See How Easy it is to Add This To Pinterest 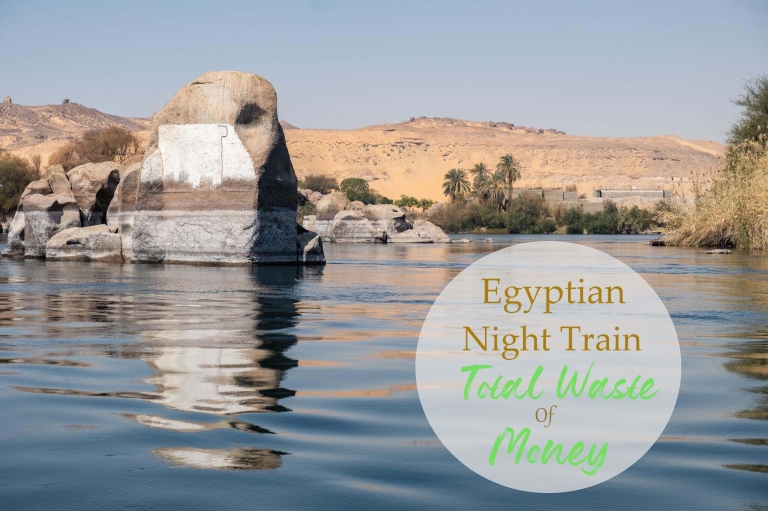 We’ve had tons of wonderful experiences all around the world, see what else we can inspire you with.