El Badi is a ruined palace on the outskirts of Marrakesh’s medina walls.  El Badi actually means ‘The Incomparable Palace’ and it was commissioned by a Sultan in 1578.  Its construction was entirely funded by a ransom which was paid by the Portuguese after the Battle of  Alcazar (the Three Kings).

Very briefly, the Battle of the Three Kings (Battle of Alcazar) was fought in northern Morocco near the town of Alcassar in 1578. It’s a bit convoluted but the combatants appear to have been The King of Portugal with the army of the deposed Sultan Mohammed II against the new Sultan Malik I and his much larger army.

Children are free to enter the palace and adults pay 10 dirham.  This is less than £1. It is great value as you could spend half a day there easily.

Although there’s not much left of the actual palace there’s enough remnants on multiple levels to see why it’s name is ‘Incomparable’. The original building is thought to have consisted of 360 richly decorated rooms, a courtyard (135×110 m) and a central pool (90×20 m).

The palace took twenty-five years to build, using some of the most expensive materials of the era (gold, Italian marble, semi-precious stones, cedar wood and onyx) and was completed in 1593.  It also took an impressive ten years to strip of its grandeur. The 17th century Sultan Ismail I, systematically destroyed the palace and removed everything of value.

It is a magnificent site and if you have the choice to visit, I would definitely recommend it.

You enter the ruins through the Green Pavillion. This isn’t the designated entrance, it’s just the only one still standing!

The Green Pavillion is missing its tiles, fountain and sculptured plaster… along with a roof, ceilings, floors and everything else lol but the thickness of the walls and the height of the doors give you an insight into its magnitude. 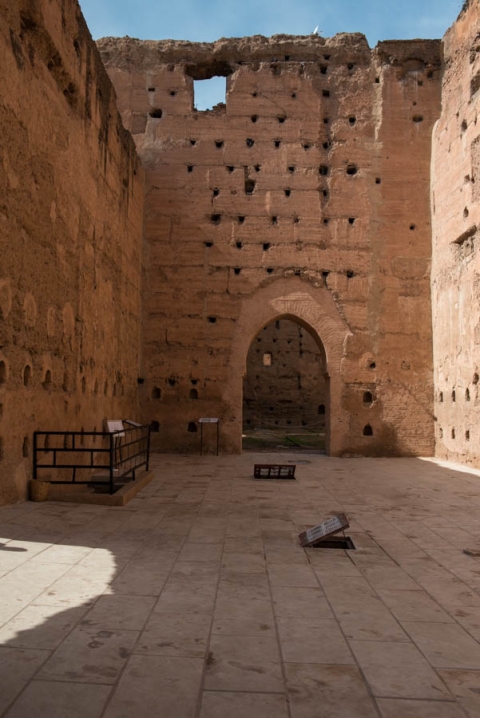 You enter through the Green pavillion

You enter the ruins through the Green Pavillion and emerge into the vast centre court.  At 135m long x 110m wide it dominates the palace.

You’ll need to take at least one bottle of water as the palace is mostly uncovered and southern Morocco has about 300 days of sunshine a year! 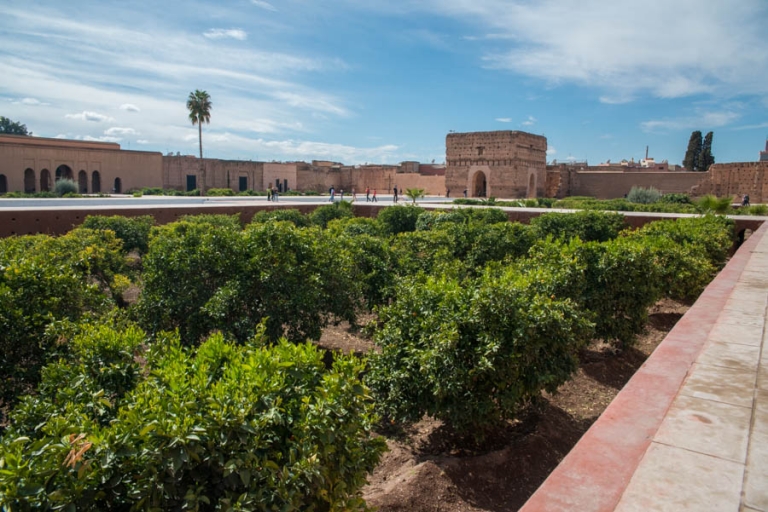 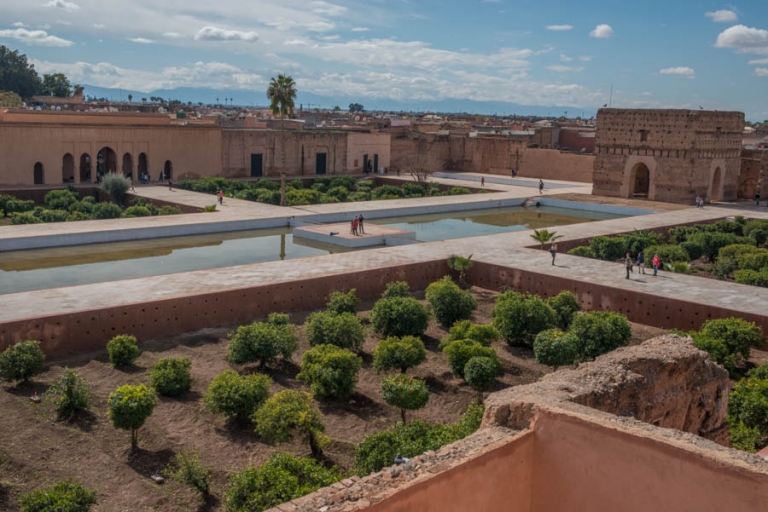 The palace ruins from above

Within the central court are four sunken gardens, two on each side straddling the pool.

The gardens are cultivated by a gardener and you can see orange and lemon trees as well as a few stray cats and a tortoise. 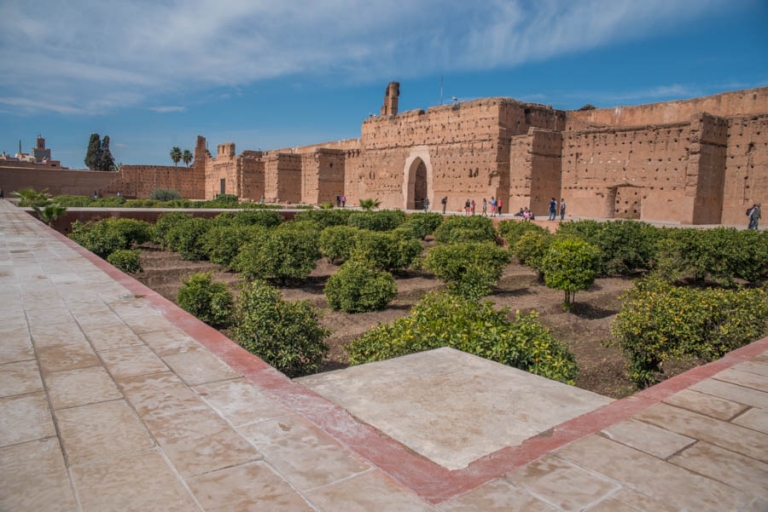 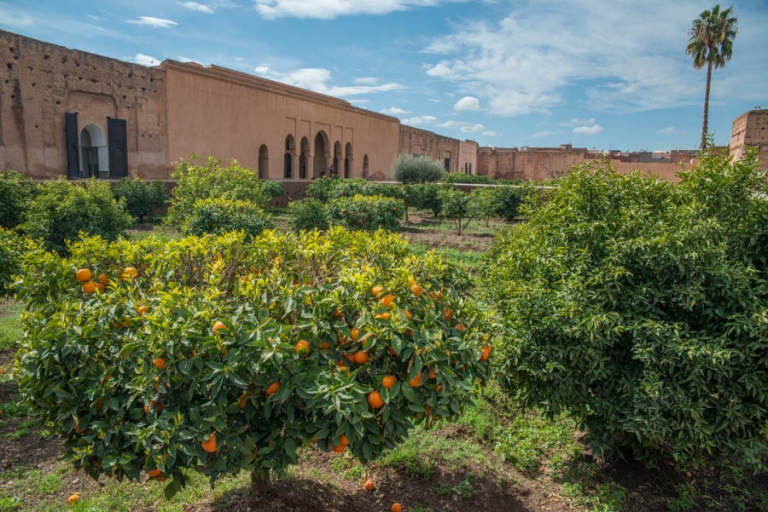 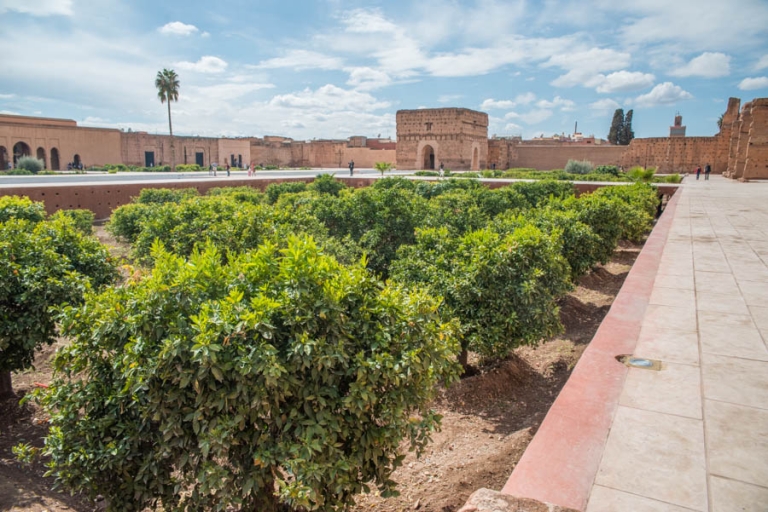 There are four smaller pools in each corner of the main court. The pools are normally empty and you can walk down inside them. These are NOT pools for swimming in however, they are thought to have been built on a substructure of vaults which circulated water through the gardens. 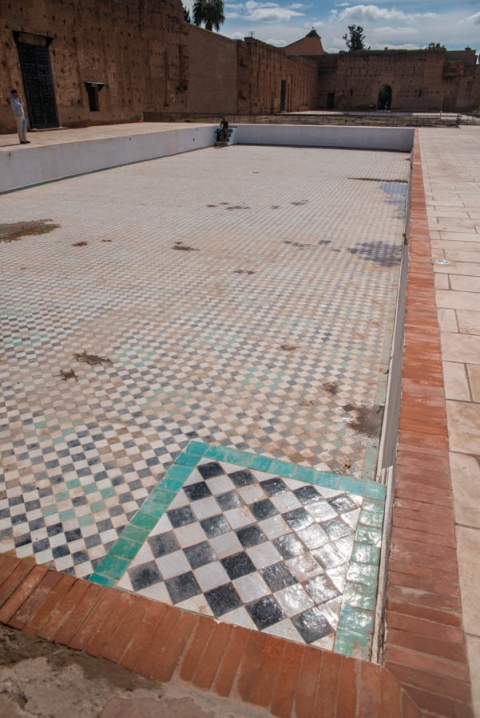 One of the corner pools

You can actually walk out into the middle of the pool. It makes a great viewing platform although I’m not sure this was its original intention!

The pool measures 90m long x 20m wide and was probably for bathing. 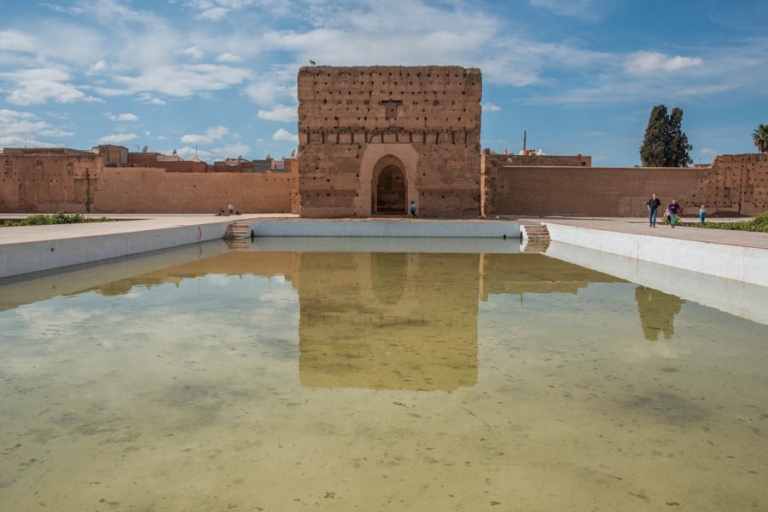 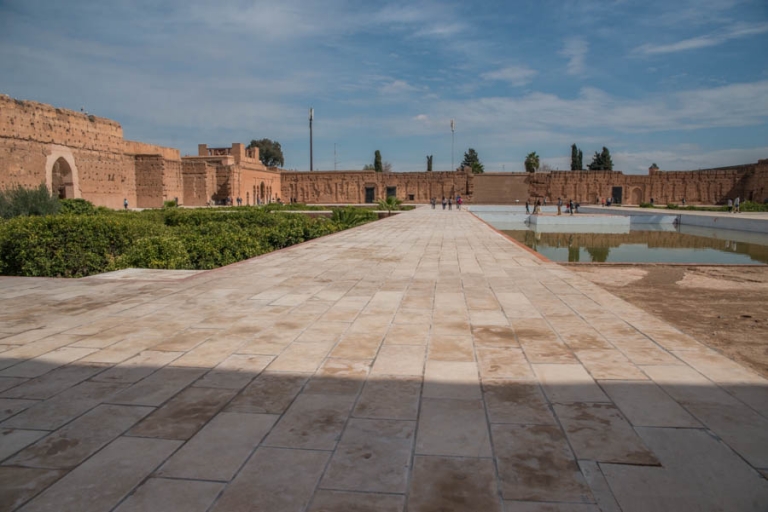 In its northeast corner of el Badi, you can climb upwards to see the ramparts from above. Whilst up there you’ll be able to see the copious amounts of storks that have made the palace walls their homes. The nests are enormous! 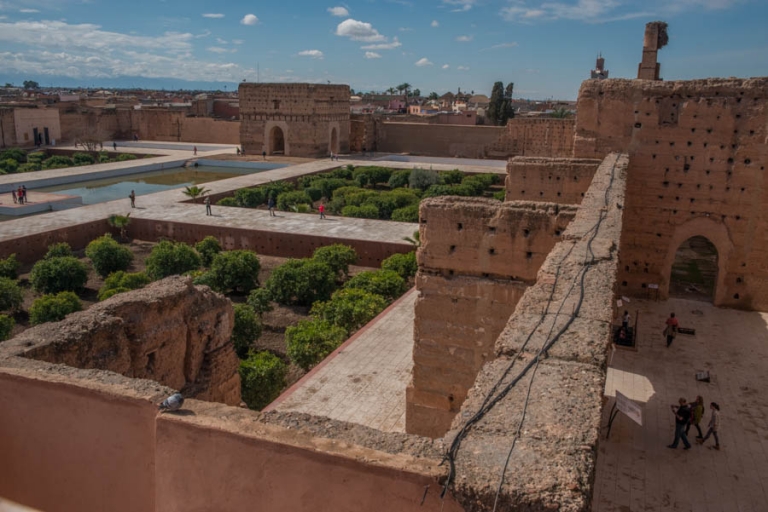 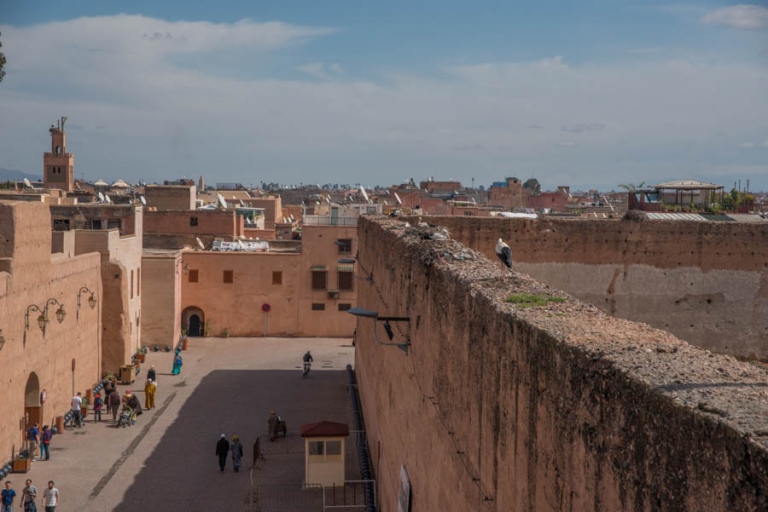 The resident storks on the walls 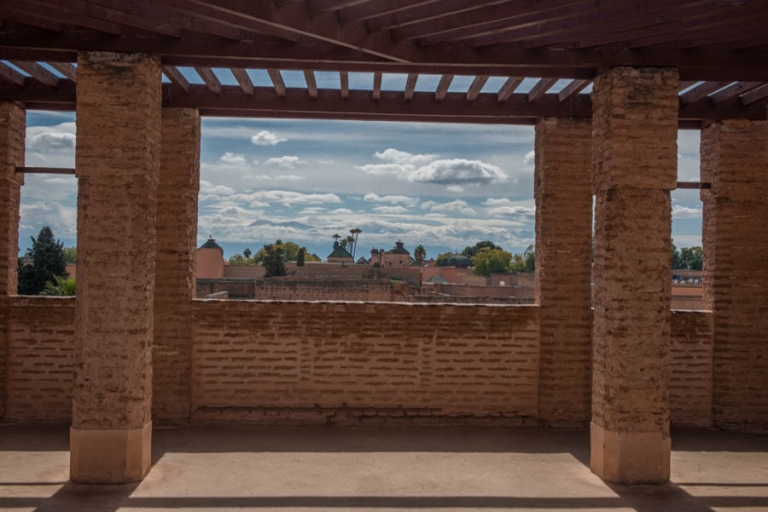 Up above on the roof 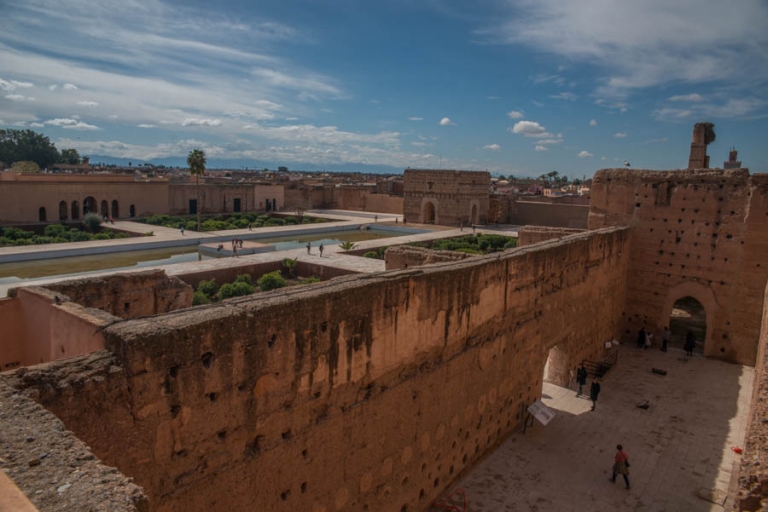 The view over the palace

The hidden chambers and dungeons

Below the palace walls are a large number of dark and narrow, subterranean passages which is thought to have been used by palace staff accessing different areas. 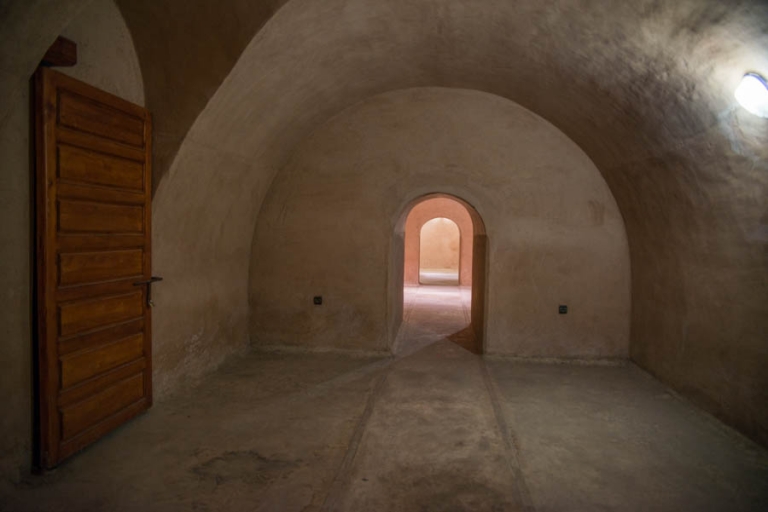 Rooms underneath the palace 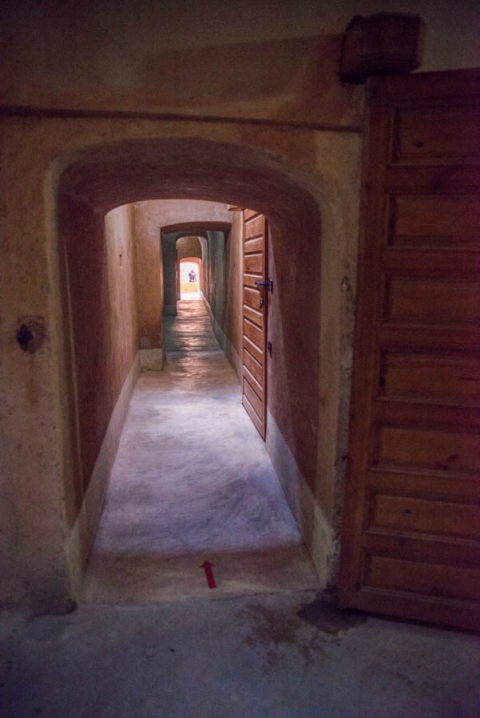 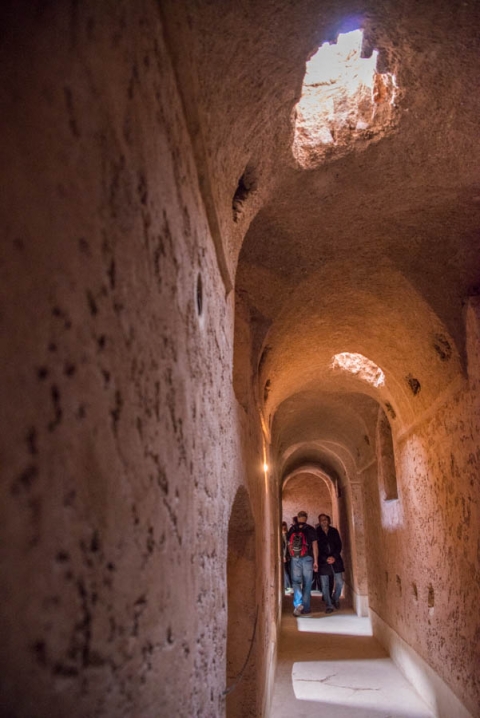 Tunnel ways underneath the palace ruins

Not content with the palace, the Sultan had a summer time residence built in the grounds. A sign of opulence no doubt. 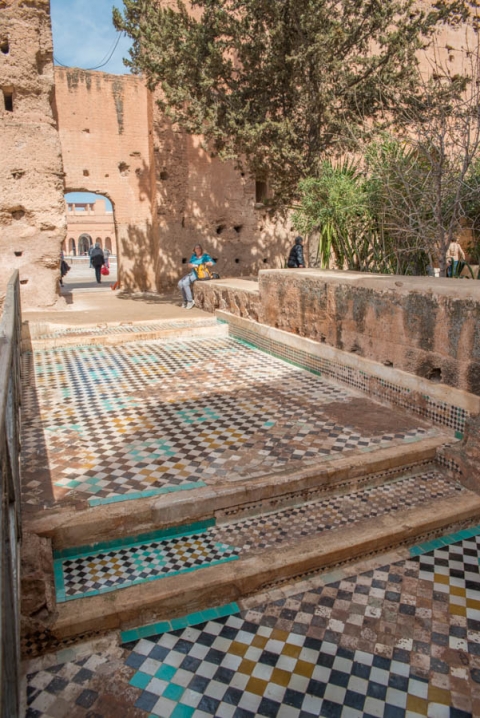 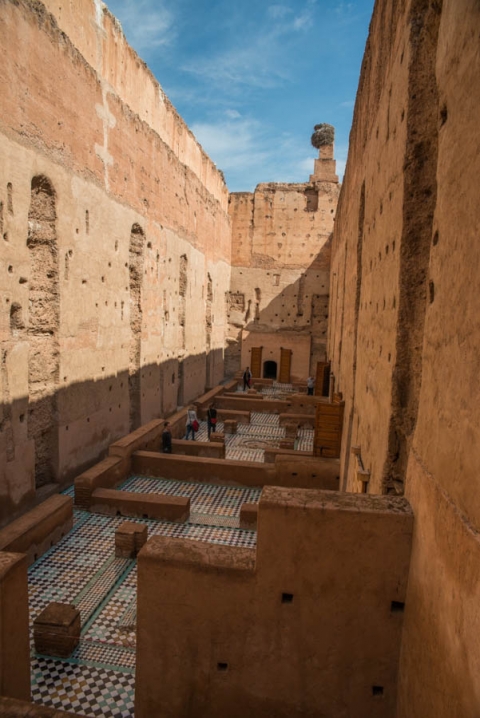 Of course, every king needs a pavilion or four…. and there are several large ones still left. The green pavilion, the cristal pavilion, the khaysuran and the audience pavilion.  These are thought to have been used as summer houses and entertaining places. 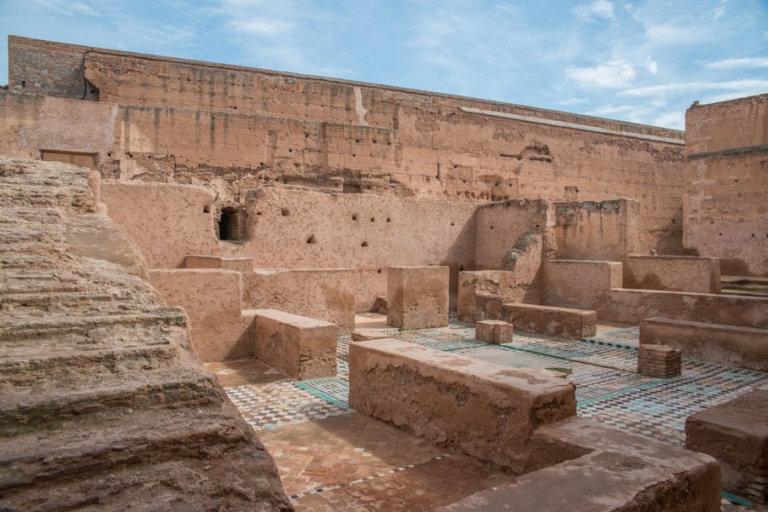 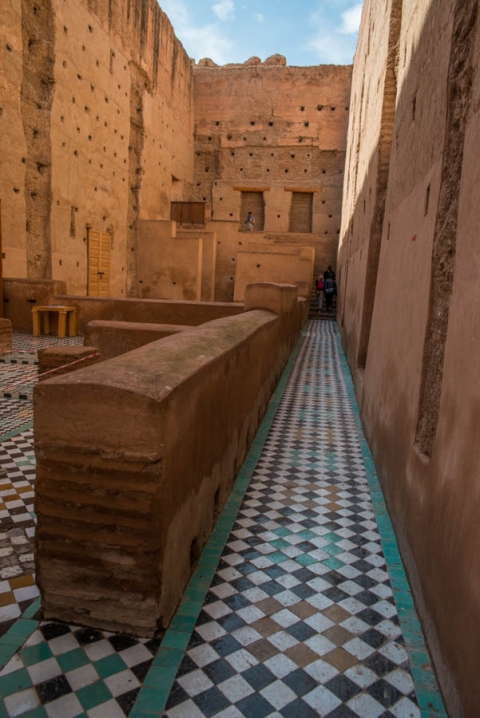 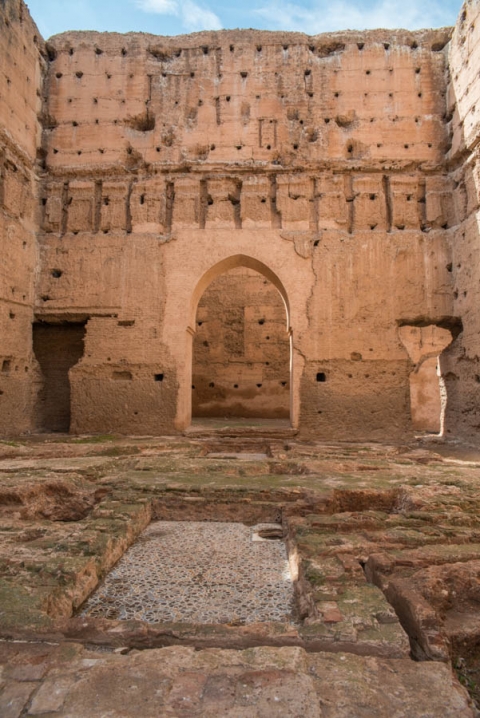 We quite enjoyed these ruins and thought they were really good value for money. There were plenty of places for the kids to run around and explore and nothing they could really break!!

They particularly enjoyed the gardens and finding the tortoise.

2016 Journey Of A Nomadic Family|ProPhoto Site