The ULTIMATE Harry Potter Road Trip: A Magical Journey Around The UK

Has there ever been a book (or film) that has captured the imaginations of so many people globally other than Harry Potter? If you’re putting together a Harry Potter Road Trip in the UK, here are the ultimate magical Harry Potter days out that we could possibly find. 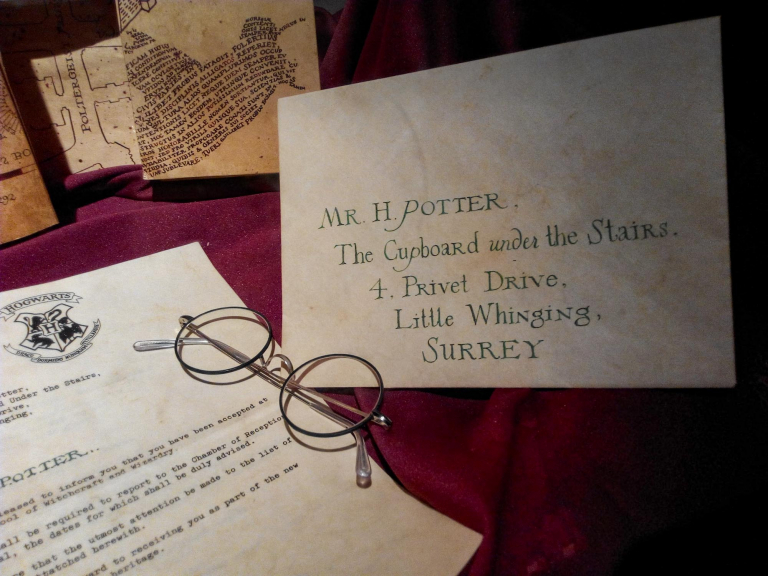 Harry Potter Holidays For Everyone

What surprised me most about the Harry Potter books and films was just how much the stories appealed to everyone across all generations and genders. If we were ever looking for something to unite the divisions, Harry Potter could be it. Although I tend to find Harry Potter is a little bit like marmite; you either love or hate it.

However, there are plenty of Harry Potter things to do in the UK (and Ireland too, I’ll include those at the bottom) whether you’re just staying in London or looking for an ultimate Harry Potter road trip, there’s absolutely loads to keep you entertained. 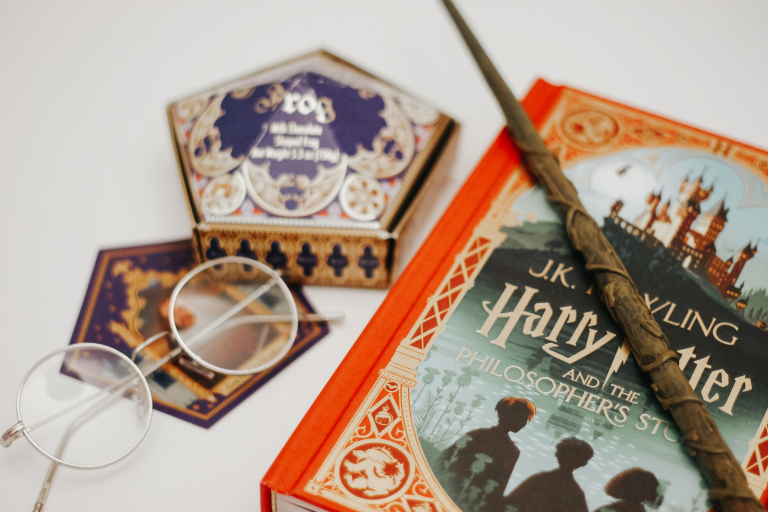 I’ve separated the things to do in England into regions.

The films featured a number of iconic London landmarks, including the Houses of Parliament, Millenium Bridge, Big Ben, the London Eye, Tower Bridge, Buckingham Palace and Trafalgar Square although these might not be the most interesting to young kids and you might want to skip to the most photogenic places such as King’s Cross.

Platform 9 3/4 is a must for true fans. It is actually located between platforms 4 and 5, next to a Harry Potter gift shop however you might want to also visit London Zoo, The Reptile House where Harry first learned he could talk to snakes. Alternatively, The Palace of Whitehall was the site of various Muggle government bureaus and ministries. Whitehall also housed the entrances to the British Ministry of Magic: the workers’ entrance in a set of underground public toilets and the visitors’ entrance within a telephone booth

Leadenhall Market was the inspiration for shops in Diagon Alley. It’s also the home of the entrance to the Leaky Cauldron as seen in the Goblet of Fire and The Market Porter Pub just across the Thames was situated next to The Leaky Cauldron.

The ornately Edwardian building Australia House, London is actually the Australian High Commission but stood in for Gringott’s Wizarding Bank, complete with goblins. You might be able to gain entry if you have a valid ID and don’t forget to take a wander around Claremont Square, Islington where numbers 23-29 were the exterior of Sirius Black’s family home 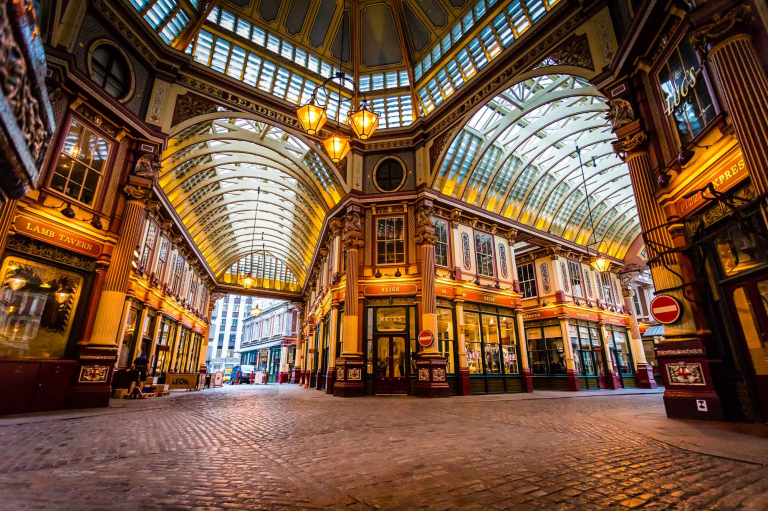 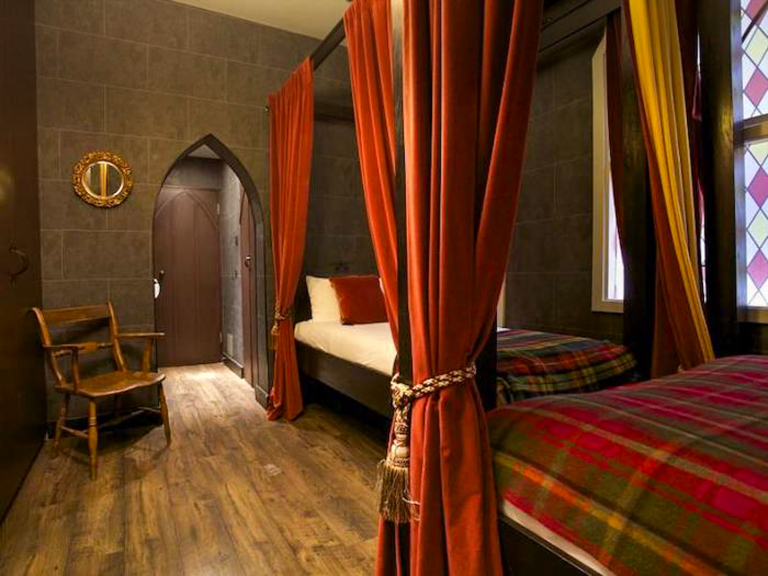 Can you do a Harry Potter road trip without visiting Harry Potter World? Yes, you could. Tickets are currently priced at £150 for a family ticket, £47 adult ticket & £38 for a child’s ticket. It’s an expensive attraction and whilst it is good, it’s not essential. In fact, I think it’s better to have a road trip without it and just use your imagination and the book.

If you do want to go, the Harry Potter Studios are located north of Watford, 75 minutes northwest of London. The nearest train station is Watford Junction which is still a 10-minute drive (50-minute walk) from the studios.

You can purchase a return transfer from London to the studios for £102 through this tour company. 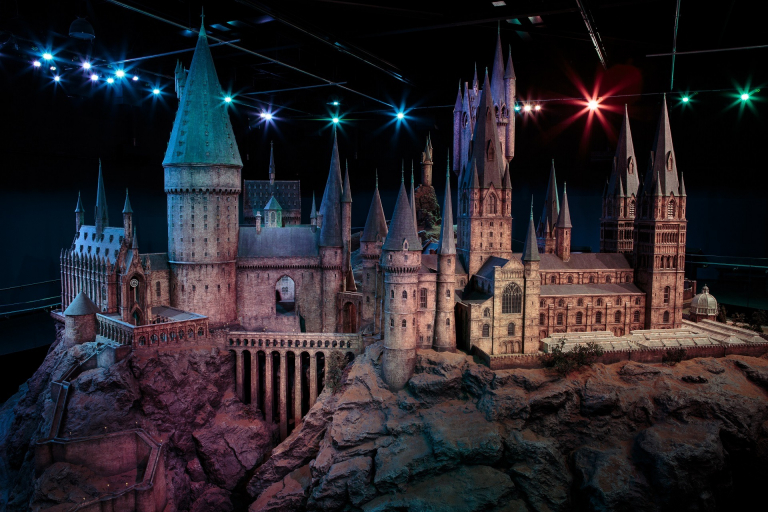 Where To Stay At The Harry Potter Experience: Stay At Harry’s House

Book in at this Harry Potter-themed house.

The filming certainly got around. If you’re on a tight schedule you might want to head straight to Oxford but if not, why not take your time and gander around the British countryside

The Deathly Hallows forest scenes were mostly filmed in Swinley Forest, near Blackwell, an hour west of London whilst the Seven Sisters Country Park in Sussex were used in the 4th film where the Portkey whisks Harry for the Quidditch World Cup.

Oxford features prevalently in the Harry Potter films and you could easily turn this into a long weekend road trip on its own.

The Hogwarts library is located in Oxford’s Duke Humphrey’s Library, which is one of the special collections reading rooms at the Bodleian. The Divinity School at Oxford is the setting for the Hogwarts infirmary and it is breathtakingly beautiful with its vaulted ceilings.

Although no filming took place here inspiration for The Great Hall in Hogwarts was taken from Christchurch College and as you’re in Oxford you should see it. Follow in Harry’s footsteps through those unmistakable cloisters which feature in The Goblet of Fire and visit the New College Cloisters.

If you have time to visit Lacock a tiny 13th-century medieval market town, do it. Several of the Harry Potter movies had scenes here including The Philosophers Stone, The Chamber of Secrets, The Half-Blood Prince, and Fantastic Beasts: The Crimes of Grindelwald.

Lacock Abbey in Wiltshire is a treasure trove for Harry Potter fans. The cloisters served as corridors in Hogwarts on many occasions whilst various rooms within the abbey were used for classrooms. These include Professor Snape’s potions classroom and Professor Quirrell’s Defense Against the Dark Arts class.

At the beginning of The Half-Blood Prince, Horace Slughorn is hiding out in his house away from the Death Eaters. That house is nearby in Cantax Hill, Lacock and during a scene in The Philosopher’s Stone, Hagrid and Harry are sitting in The Leaky Cauldron when we see a flashback scene involving Voldemort. Harry’s parents’ house is at the end of Church Street opposite St Cyriac’s Church.

In Harry Potter and the Chamber of Secrets, the caves featured are those of Wookey Hole Caves in Somerset. The caves have been used by humans for around 50,000 years.

Take a tour of Gloucester Cathedral which features several pivotal moments from different films, including the troll scenes for The Philosopher’s Stone and is home to the original door from the Gryffindor common room. 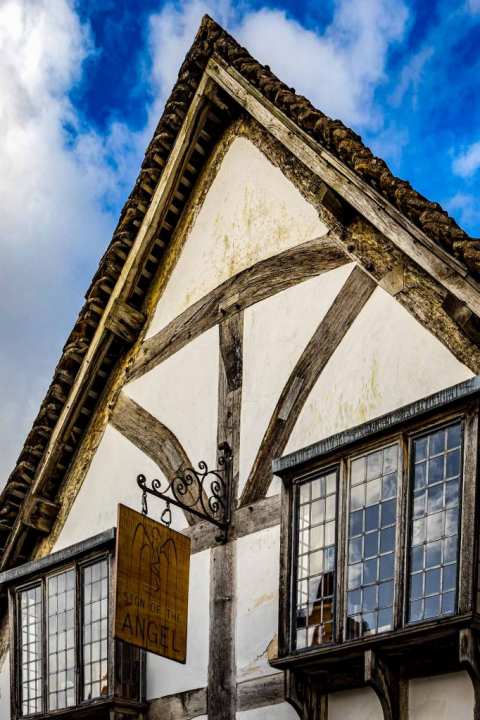 Where Could You Stay In Oxford? 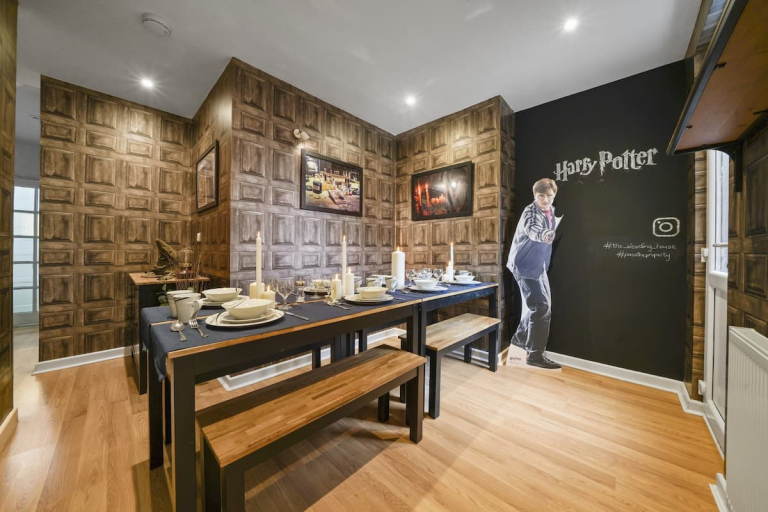 The Most Magical Harry Potter House

Visit the De Vere House in Lavenham which was used as parts of Godric’s Hollow in Harry Potter and the Deathly Hallows Part One. During the filming of Harry Potter, different parts of the house were cut and pasted to make up the whole of Godric’s Hollow with winter snow being added later using special effects. You can rent rooms for overnight stays in this house too. 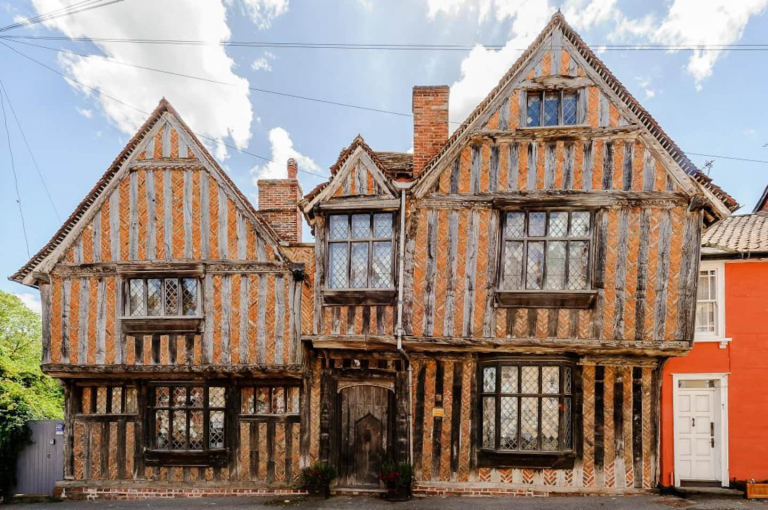 The lush woodland where the Quidditch World Cup is held is Ashridge Wood in Buckinghamshire, part of the National Trust’s Ashridge Estate.

Elizabethan mansion Hardwick Hall, Chesterfield, Derbyshire became Malfoy Manor, the main base of the Death Eaters in the later movies and less than a mile from Malham in Yorkshire the unusual curved limestone rocks of Malham Cove appeared as the camp where Harry and Hermione hide from Voldemort in Harry Potter and the Deathly Hallows.

Whilst you’re in Yorkshire, pop over to Goathland Station, the not-so-imaginary station that serves both the village of Hogsmeade and Hogwarts. 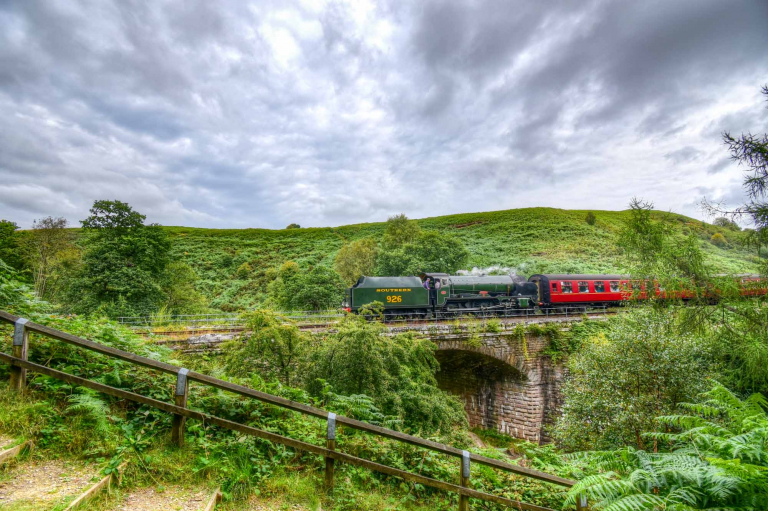 Where Could You Stay In Northern England? It Would Have To Be Hagrid’s Hut.

Check Out The Photos From Hagrid’s Hut! 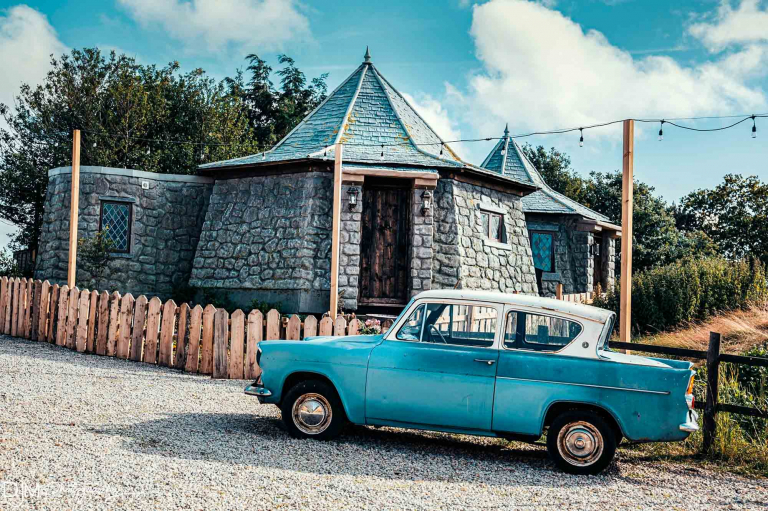 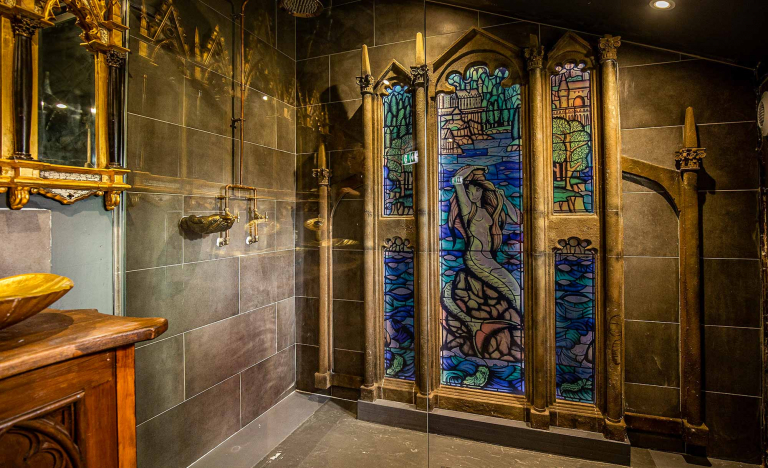 The Outer Bailey of Alnwick Castle in Northumberland is the location for Madam Hooch’s first flying lesson and Harry and Ron landing the Ford Anglia in Chamber of Secrets.

The spectacular Cloisters of Durham Cathedral were used as a filming location when they became the quadrangle where Harry sets the owl free, where Ron’s slug vomits in the Chamber of Secrets and the Cathedral chapter house is the venue for Professor McGonagall’s class. 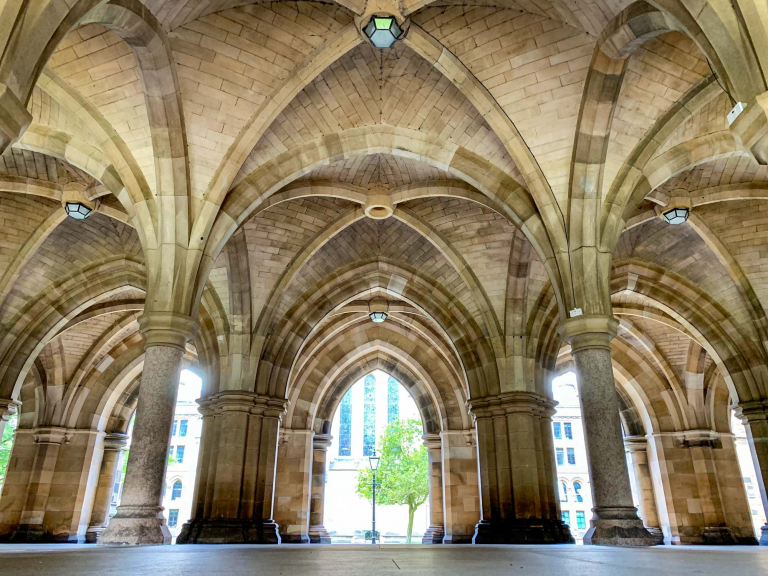 Cloisters from the University of Glasgow

Edinburgh may not be of particular interest to younger Harry Potter fans but older fans may like to visit Greyfriars Kirkyard (where you can see a grave to ‘Thomas Riddle’) and the coffee shop, The Elephant House, where JK Rowling spent time planning & writing during the creation of early Harry Potter books. Get a magical walking tour of Edinburgh here.

If you’re feeling flush, you could book a stay at The Balmoral Hotel, the Grand Suite where JK finished Book 7. She stayed in room 552.

Loch Shiel in Glencoe: is the setting for The Hogwarts Lake and Hagrid’s stone hut.
That famous tiny island with the staggeringly tall pines can be found at Eilean na Moine and Loch Eilt, Lochaber: This enchanting island is the final resting place of Albus Dumbledore and you can also see Steall Falls where Harry battles with a dragon for the Triwizard Tournament in Goblet of Fire.

Not a filming location but somewhere with HP vibes: Glasgow University Cloisters. 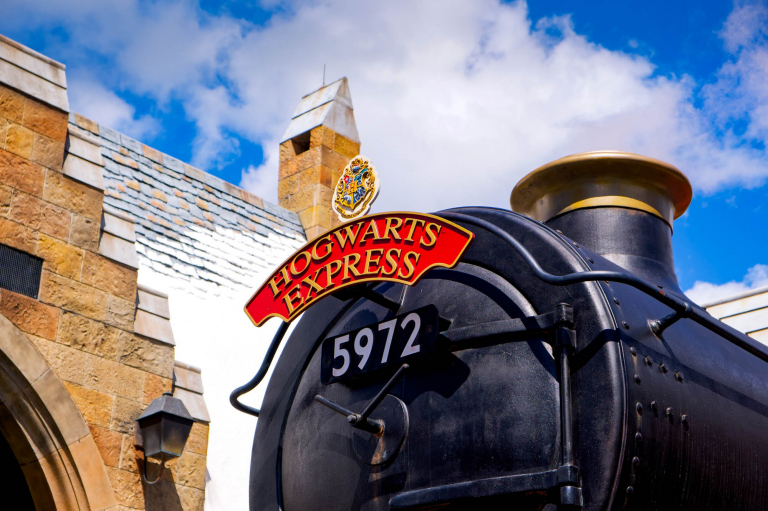 Where To Stay Locally? The Canongate Luxury Homestay

At this special homestay, you’ll find each door is painted in the Hogwarts houses’ signature colours. There’s a Gryffindor-themed bedroom complete with an illusion of floating candles, memorabilia (such as a desk that is said to have belonged to J.K. Rowling) and a living room resembling the Gryffindor common room.

Freshwater West was featured in Harry Potter and the Deathly Hallows where it was used as the backdrop for Dobby’s Shell Cottage. Although the cottage was removed after filming you can still walk in the footsteps of Harry, Hermione and Ron.

Stay Nearby Freshwater Beach In This Traditional But Renovated Dairy Loft 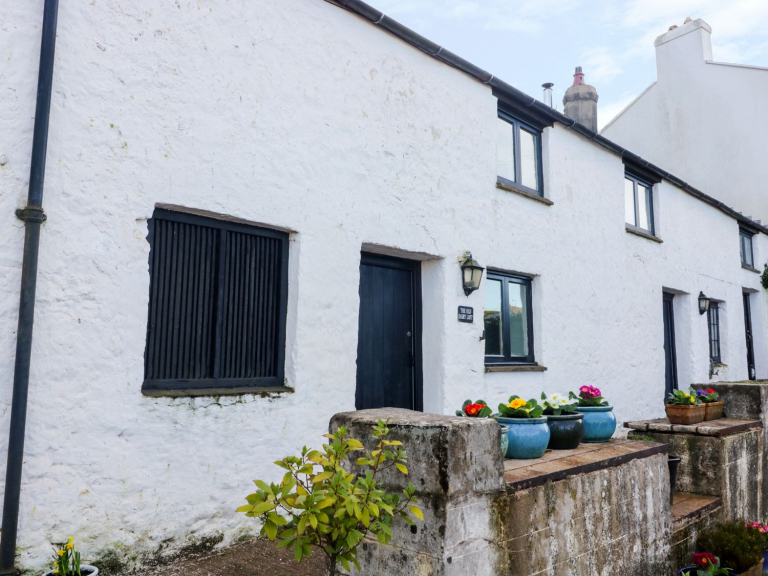 The Cliffs of Moher, County Clare, on the Atlantic coast, are featured in ‘Harry Potter and the Half-Blood Prince’ when Dumbledore takes Harry to destroy the Horcrux in the sea cave. The rock, on which Harry and Dumbledore stand, however, is 90 miles away off The Iveragh Peninsula on Lemon Rock, County Kerry. 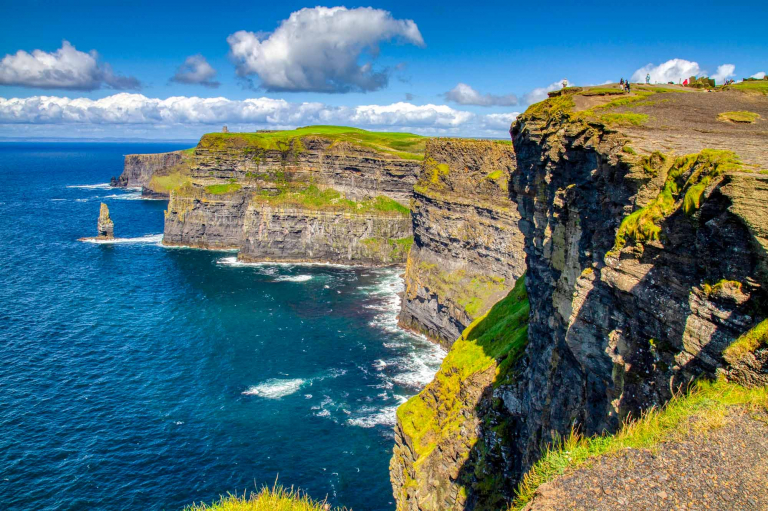 Where To Stay Here? In Another Harry Potter Themed House…

Please note this is 2 hours south of County Clare & The Cliffs of Moher. 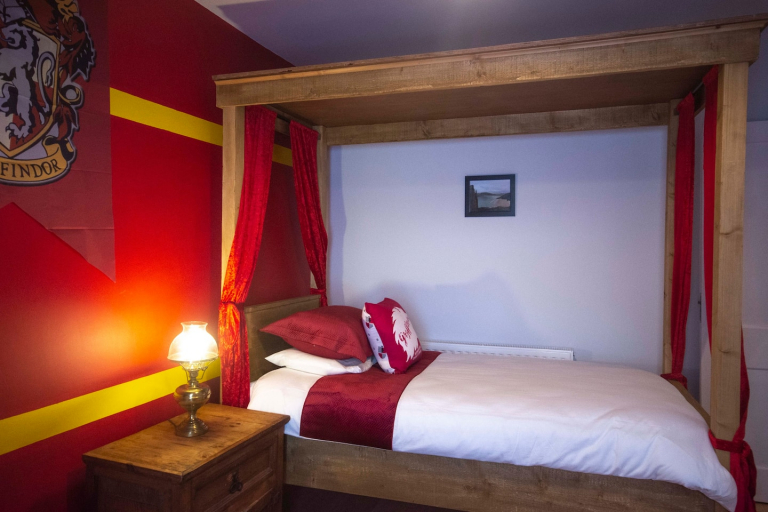 Are There Harry Potter Tours?

There are hundreds of tours around the UK centring on Harry Potter. Here are just a few. If you want more, click on the pictures and search for more.

We love writing these posts and when you save them or share them, it really helps us to write more. Thank you. 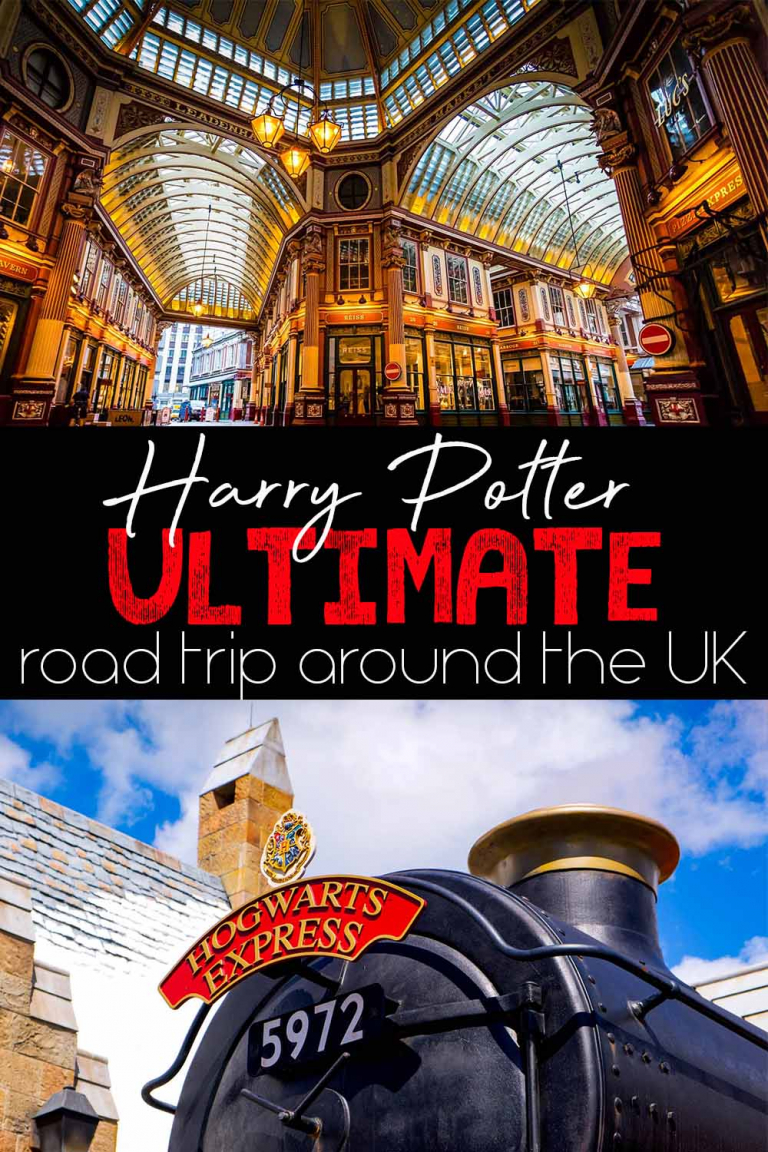