How To Dive The Red Sea: Diving Port Sudan

Looking to dive the Red Sea? Consider diving from Port Sudan. The Red Sea has a phenomenal reputation for some of the best diving accessible from Europe. The majority of resorts and locations, however, are based in Egypt or Israel (which I refuse to visit due to the deliberate destruction of Palestine) but if you’re looking for unspoiled diving in an off the beaten track destination, here’s how to dive the Red Sea from Port Sudan. 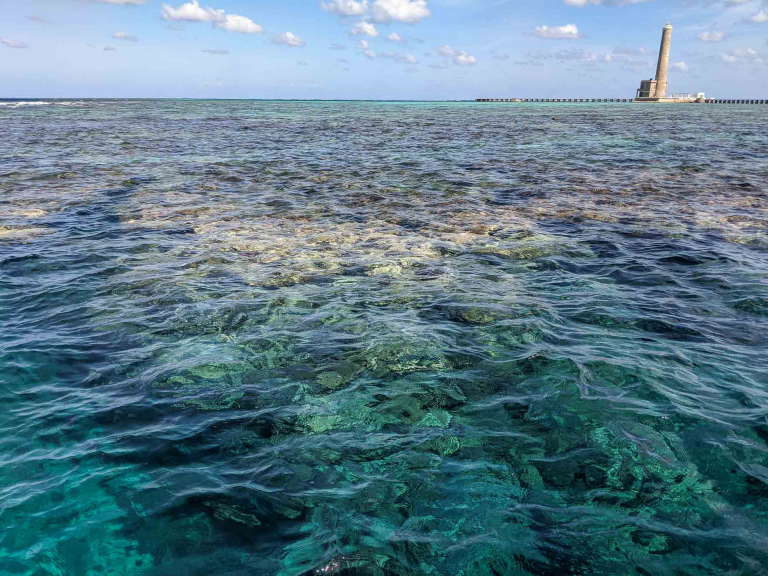 Dive the Red Sea from Sudan

Why Dive The Red Sea From Sudan?

The Sudanese Red Sea coast stretches out 400 miles between Egypt and Eritrea.  The reefs are pristine, full of colour, they’re uncrowded, have healthy fish populations, there are interesting wrecks to discover and you might see some whales and turtles too.

Trips to Sudan are a little bit harder to organise than other parts of the world but the effort is absolutely worth it! 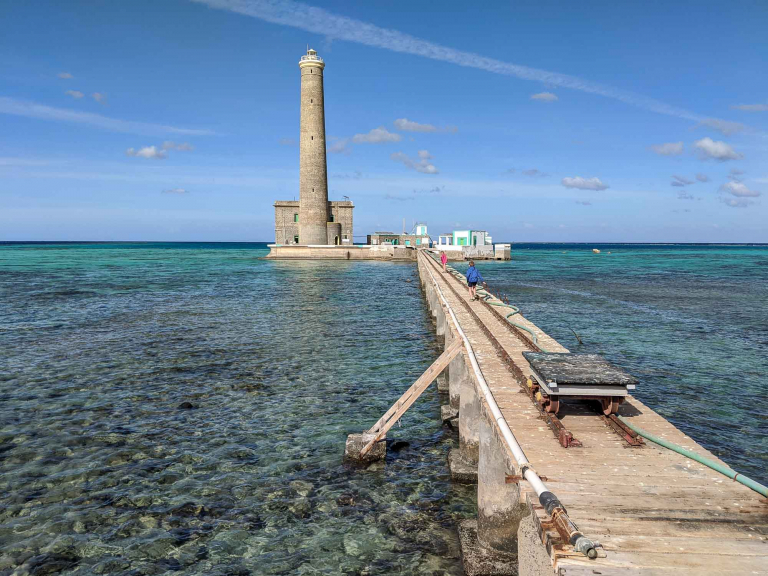 Sudan is in North Africa and shares land borders with Egypt, Libya, Chad, Eritrea, Ethiopia and South Sudan. It shares a maritime border with Saudi Arabia.

It is perfectly safe to visit and there are places of significant history to visit too. The only subject you should be mindful of is that England invaded in 1896 and didn’t leave until 1951 at which point a dictatorship took over.

How Can You Get To Sudan

Flights to Sudan are relatively easy although you’ll need a Sudanese Tourist Visa before you can travel.  You can fly directly into Khartoum (from Bahrain, Ethiopia or Istanbul).

Sometimes you can also cross by the land border at both Egypt and Ethiopia but these are frequently closed.

You can also catch a foot ferry from Saudi Arabia.

Getting To Port Sudan

Port Sudan sits on the east coast of Sudan and is a lively city with a tightly packed centre and a port.

You can fly from Khartoum to Port Sudan directly in under an hour (flights are $100) or you can drive which will take approximately eight hours. We chose to drive and visited the Old Port of Suakin on our way up.

If you drive up to Port Sudan from Khartoum, you’ll also pass the historical sites of The Meroe Pyramids and Naqa & Musawwarat es Sufra. 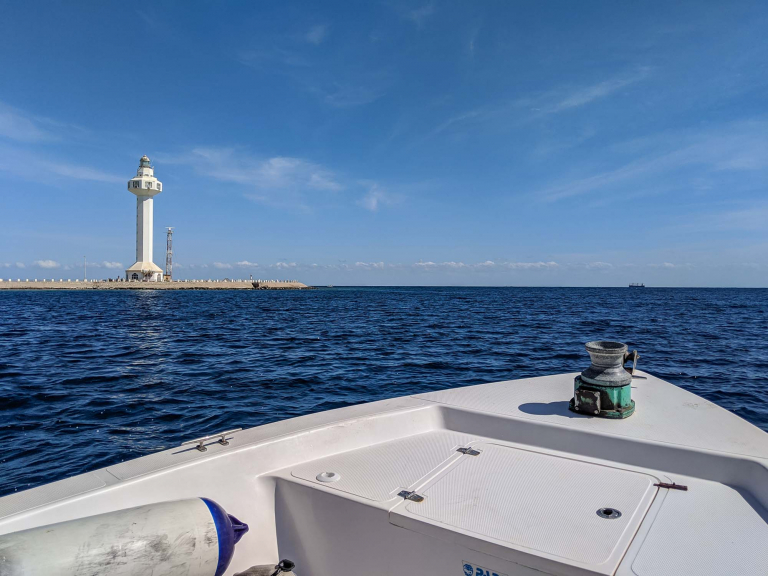 Where Could You Stay In Port Sudan?

We stayed in the Baasher Palace Hotel at £60 (Sudanese pounds) but Airbnbs are becoming more popular. Baasher gives a pleasantly simple experience with moderate hygiene however its location is really close to local restaurants and cafes, making it a fab choice.

There are other hotels in the area with Coral Port Sudan being the most expensive. 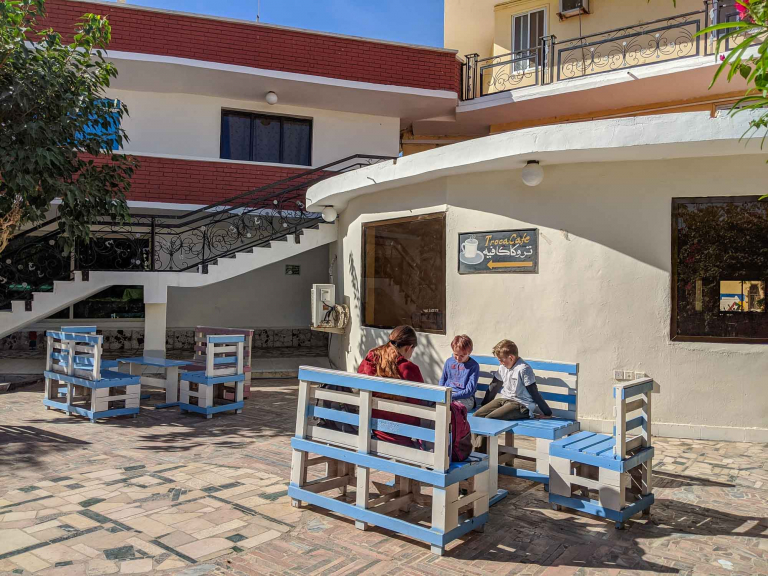 How To Go Diving In Sudan

There are two ways to go diving in Sudan. The first is to book and stay on a liveaboard and the other is to stay in Port Sudan and take day trips out to the reefs and wrecks.

You can book liveaboards in Sudan through these providers:

We chose not to go for a liveaboard because we have two younger children who cannot dive yet and me, who still isn’t qualified despite diving multiple reefs around the world. Eye roll for me. That means just two out of our five members are qualified divers and as liveaboards are not only expensive but quite snobby towards non-qualified divers, we felt it would be a better option to dive as day trips.

Liveaboards operate all year round in Sudan although the sea, temperature and fish migration conditions vary throughout the year. Hammerhead season is from January to April while August to October is manta ray season. The dry season (November to June) usually has better visibility than the rainy season (May to October).

Instead, we chose to stay in Port Sudan and take day trips out to the reefs and wrecks. 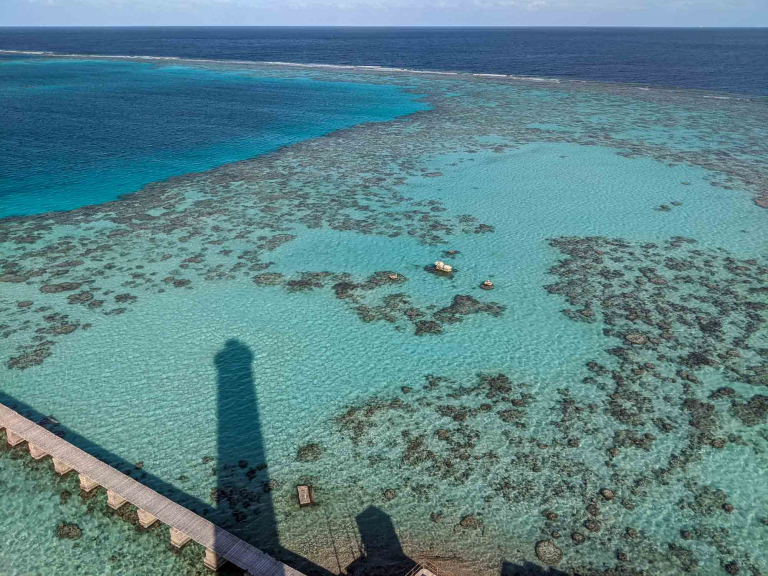 If you’re looking to dive the Red Sea as day trips you can book with Red Sea Secrets.

We spent two days with Red Sea Secrets diving off the coast of Port Sudan and visiting various reefs and wrecks. If you’re not a qualified diver yet, don’t worry because Red Sea Secrets offer PADI certification and they even offer camping trips into the northern shores of Sudan. If you want to see hundreds of manta rays, this is what you should do.

Sadly our itinerary didn’t allow us time to do that but I wished it had. The sea is truly this shade of turquoise blue too. 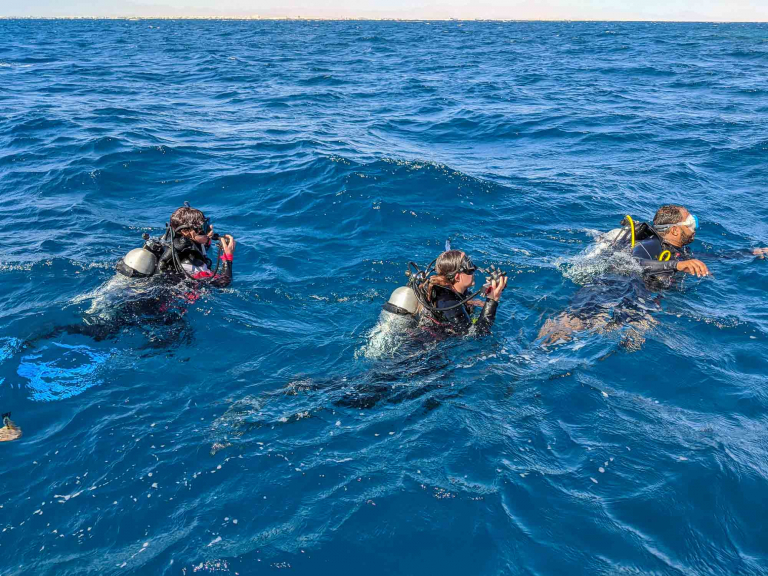 What Reefs & Wrecks Are There In Sudan?

With 800km of Red Sea coastline, it’s unsurprising that there are a number of places to dive. These are the reefs and wrecks off the coast of Sudan. 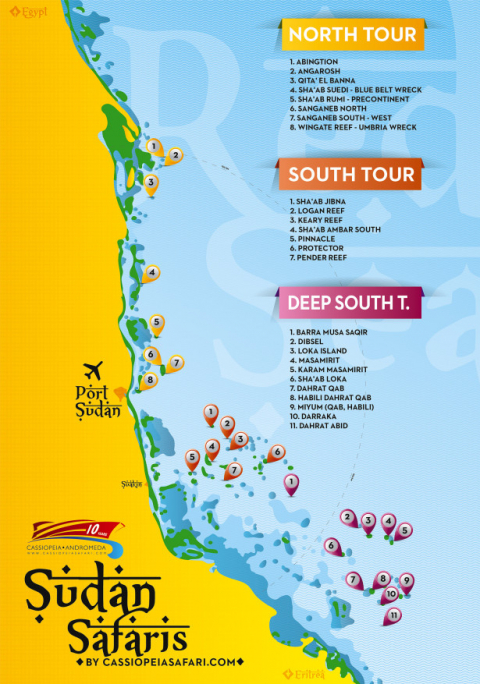 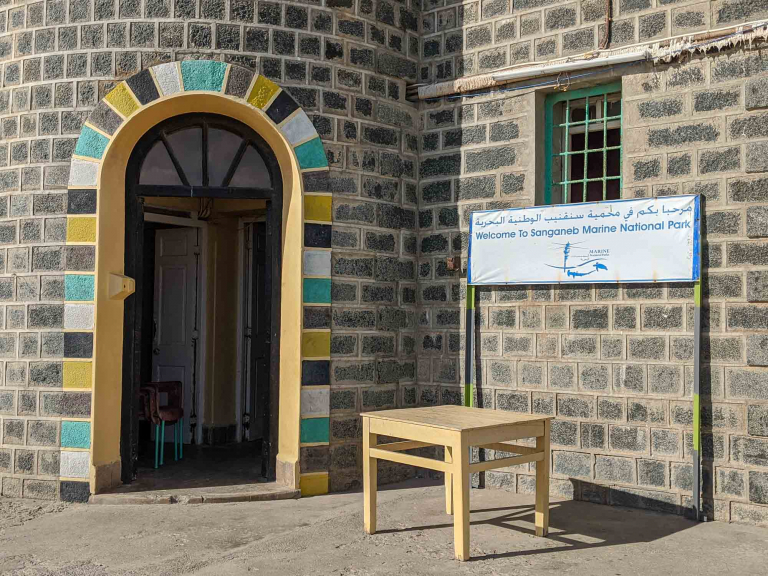 A Few Of The Highlights of Diving Sudan

With over 26 dive sites in Sudan here are just a few of the highlights:

First launched in 1911 and sunk June 9th 1940, the Umbria was an Italian vessel transporting troops & war supplies to African colonies. Originally the boat was on her way to Eritrea when Italy declared war on Sudan. The Sudanese-British army occupied the boat and were about to order the Italians off when they deliberately started sinking it.

The Umbria is thought to be one of the best wreck dives in the world and has a large array of cargo still intact. Roughly 18 tons of ammunition lie in the cargo holdings along with half a million Maria Teresa coins.  At high tide she is approximately 35m below sea level however at low tide she sits at just 5m below and the tips of the two masts peek out of the water.

The ship is encrusted in coral with schooling fish and many crustaceans on her hull. If you’re looking for more adventure the boat has openings in the deck where you can dive through.

The Umbria is considered shallow by divers’ standards and even if you don’t dive, you can still snorkel here and see it well.  Marine life includes cleaner shrimps, snappers, spiny fish, butterflyfish and barracudas. 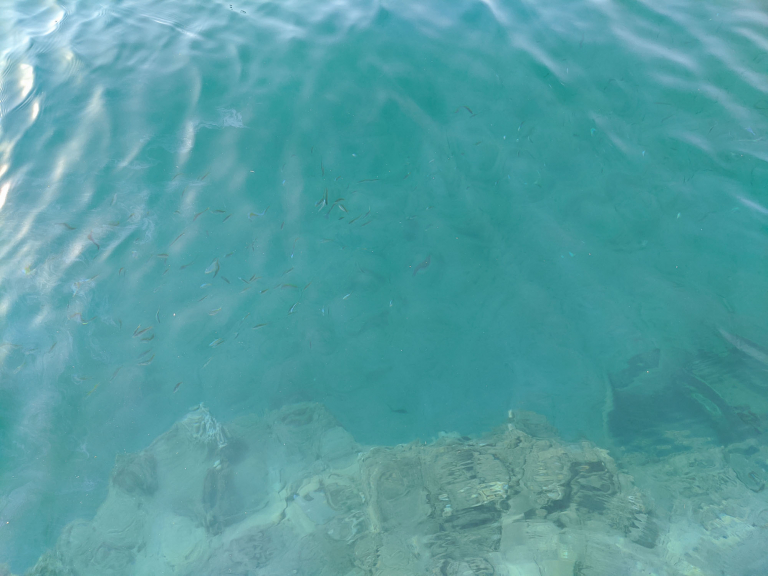 This ring-shaped coral is the only atoll in the Red Sea and was the first marine national park created in Sudan. Sanganeb has one of the most unique reef structures in the whole of the Red Sea as the slopes rise from the seabed more than 800m deep.

Known for its richness in marine life the atoll hosts at least 300 fish species including numerous endemic and rare species of sharks, the occasional Napoleon wrasse, humphead parrotfish, dolphins, marine turtles and a good representation of other invertebrates such as molluscs. There are also over 86 different types of corals recorded in the atoll alone.

The lighthouse height gives a great perspective to the ring shape of this atoll that isn’t really visible from eye level. 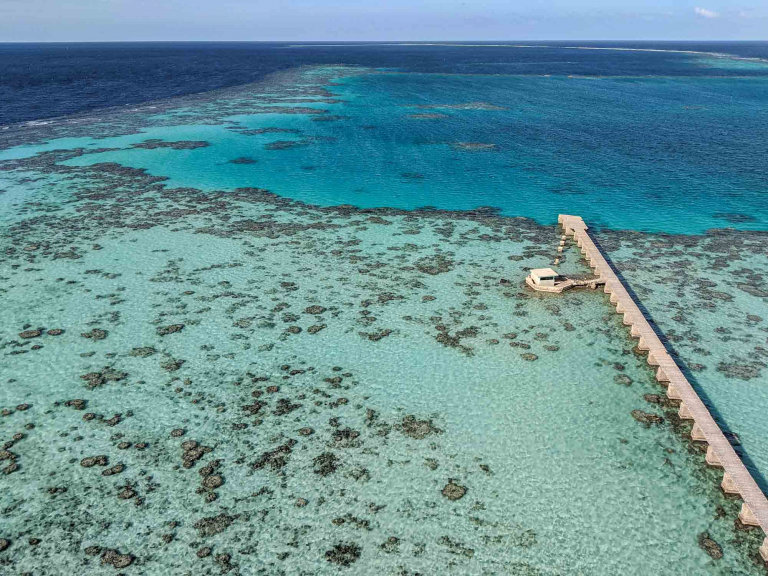 Probably the most famous dive site of Sudan, Sha’ab Rumi is 48km from Port Sudan. Made famous by Jacques Cousteau who built the Precontinent II underwater living village.

This long reef surrounds a gorgeous lagoon that is accessed through a narrow strait that was blasted by Cousteau. The main dome is just 9m deep and other remaining structures are shark cages, a hanger and a tool shed – although only certified divers can enter the structures.

Some of the cages he left submerged can be used for shark watching. Other marine life here includes barracudas, jackfish, grey reef sharks, silky sharks, silver tips and bumphead parrotfish.

Between November and April, this is one of the best places to see hammerhead sharks. 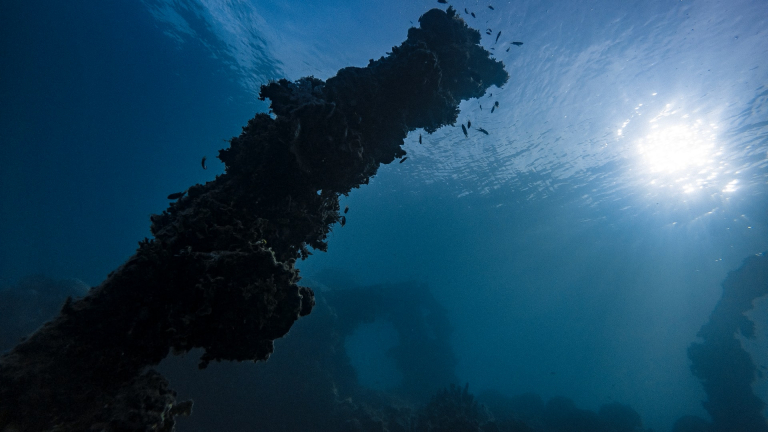 Once a cargo ship, it sank in 1977 with a full cargo of cars, trucks, tractors and spare parts. The Blue Belt now lies upside down and you can enter through a large opening in the hull, at approximately 56 metres deep. There are a number of cars and trucks now resting on the enormous reef which have become encrusted in coral

The Toyota Wreck holds an amazing coral garden and when the current is favourable, it’s rumoured to be a great spot to night dive from as thousands of little deep-sea creatures come close to the surface to feed close to the lights. 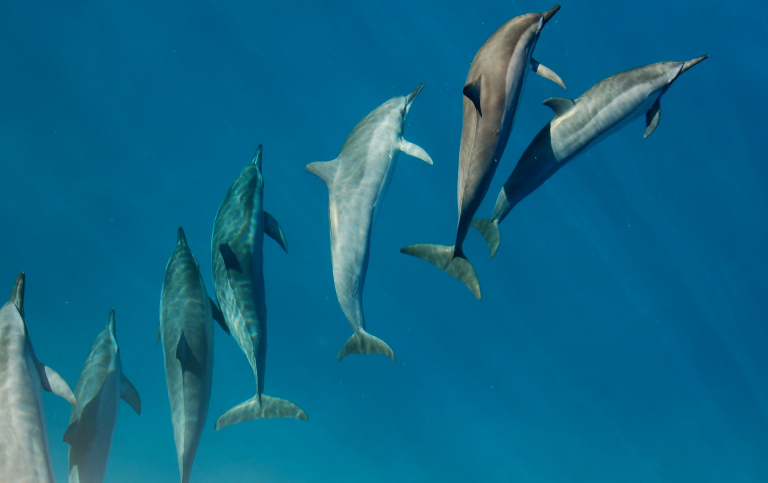 Angarosh is a remote, deep-sea diving opportunity for experienced divers. Located about 20 miles north-east of Port Sudan and approximately 12 km east of Mukawwar Island. The name means Mother of Sharks which gives you an insight into the marine life found here.

On the west side of the reef, there are two openings to the interior lagoon where you’ll find the remains of Cousteau’s Pre-Continent I.  The southern area of the reef attracts large schools of fish as well as different species of sharks including hammerheads, tiger sharks, silver tips and grey reef sharks. You might also see schools of blue & yellowfin tuna, snappers and trevally. In the summer months, you’ll find manta rays. 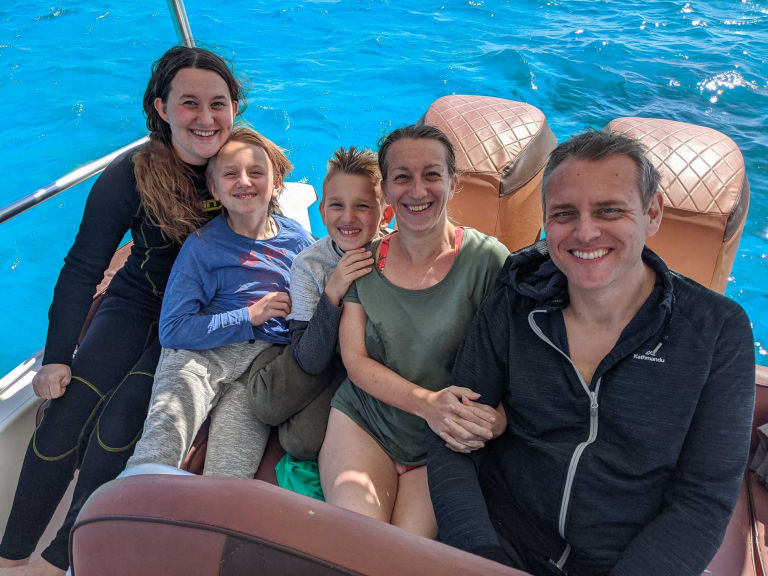 Us on the boat in Port Sudan

What Fish Might You See If You Dive the Red Sea?

As well as the ones listed above, you might see:

Corals: Over 200 different types of coral can be found in Sudanese waters. 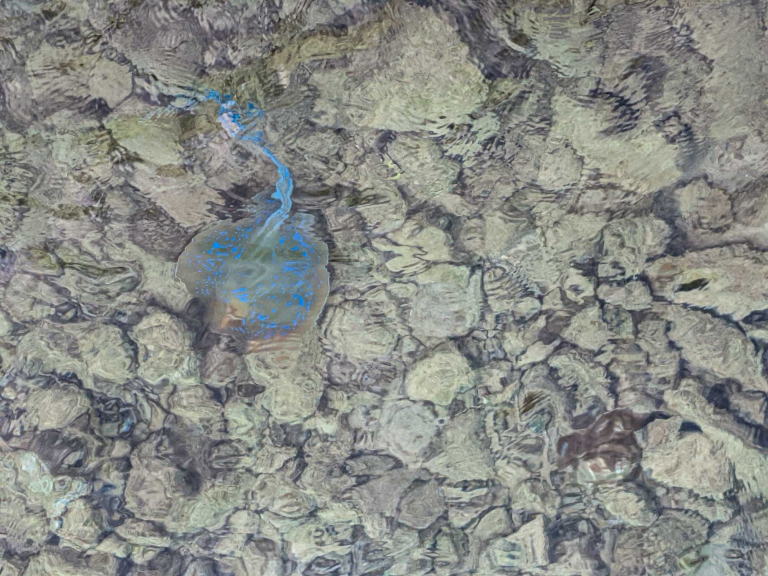 When Should You Visit Sudan?

The winter season in Sudan is between December and February when the water temperature drops to 23C. The sea conditions can be choppy however visiting during this time gives the best opportunity to see hammerhead sharks.

The high season in Sudan is considered to be March to June or October to November. October and November are autumn and temperatures are comfortable. This is the best time for spotting thresher sharks and manta rays.

July to September is low season in Sudan with temperatures becoming too uncomfortable and hot. 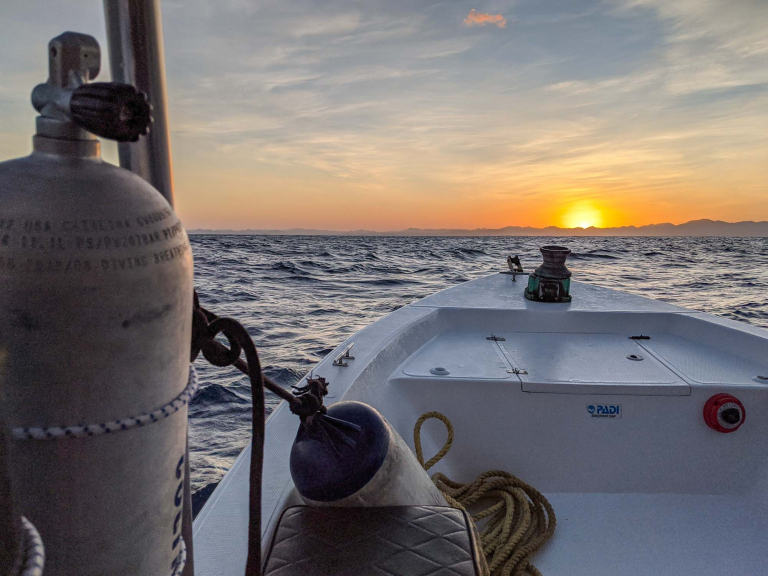 Video From Diving In Sudan

We love travelling and creating content that helps you travel too. When you share and save our posts it enables us to write more. Thank you. 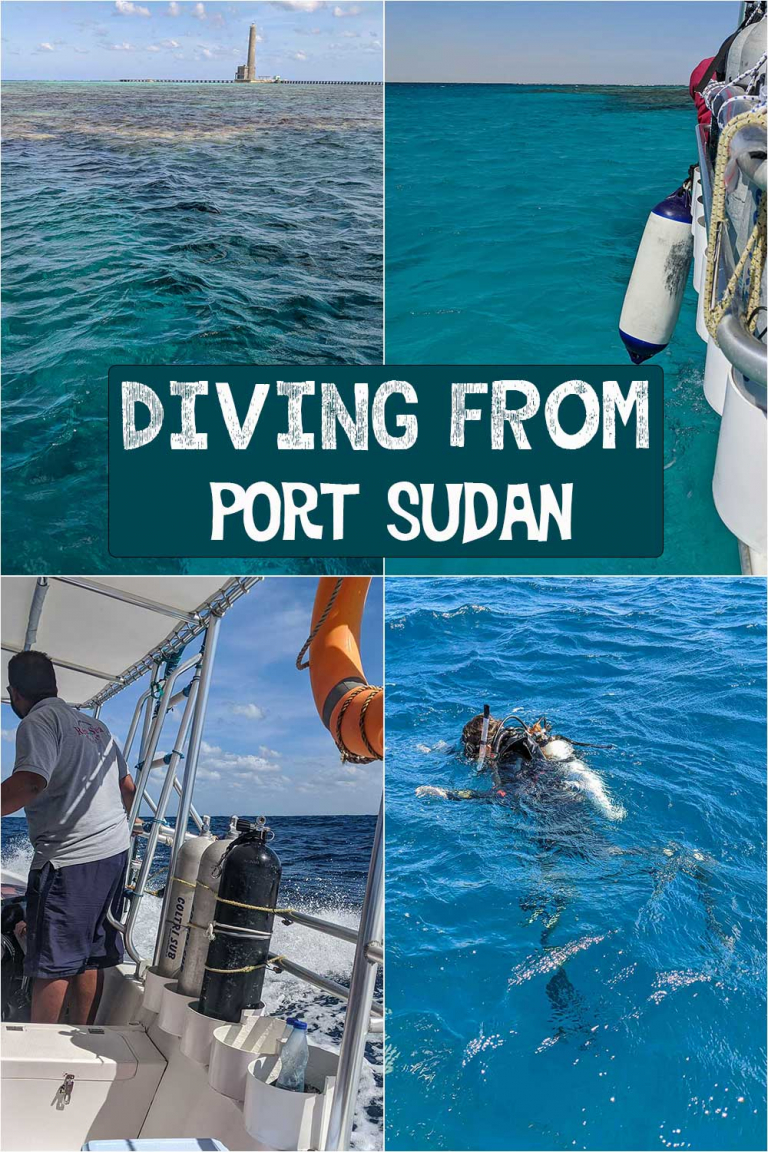 If You Want To Dive the Red Sea, See More Posts from Sudan

Spread the love
Posted in Sudan
« The ULTIMATE Harry Potter Road Trip: A Magical Journey Around The UK
A Weekend Away In The UK: Alternatives To Cornwall For Short Holidays »