Muay Thai with kids at the Ratchadamnoen Stadium. Is it worth it?

Muay Thai is one of the most exciting sports I’ve seen. Unlike western boxing, Thai boxers use each part of their body including feet, knees and, my favourite, elbows!

Muay Thai also seems much more respectful than boxing; if an opponent falls in Thai boxing the match doesn’t continue and no further blows or kicks can be given. Compare this to western boxing where fighters are pulverised once down. 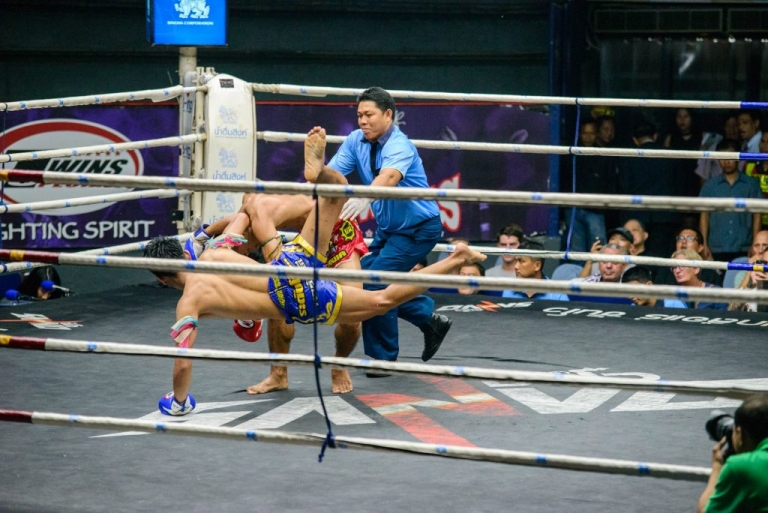 How much and where from?

I bought our tickets online directly from the stadium. I paid by Paypal because I think it’s easier and safer than using my credit card. My internet connection isn’t secured (the vpn may or may not protect me) and if I need to stop my bank card I’m scuppered until I go back to the UK in… er November?

When we arrived at the stadium, our name was printed on a collection sheet and after providing proof of ticket purchase (email on phone) the tickets were given to me and we were escorted into the stadium by an usher.

We were given a choice of seats in an area but we chose to sit slightly higher for a better view. Seating is divided into three categories; ring side; club class, second class and third class…. I chose club class because I wanted some height to my photos and not have to look underneath the ropes all the time however when we got there I realised we should have booked second class for a better view. 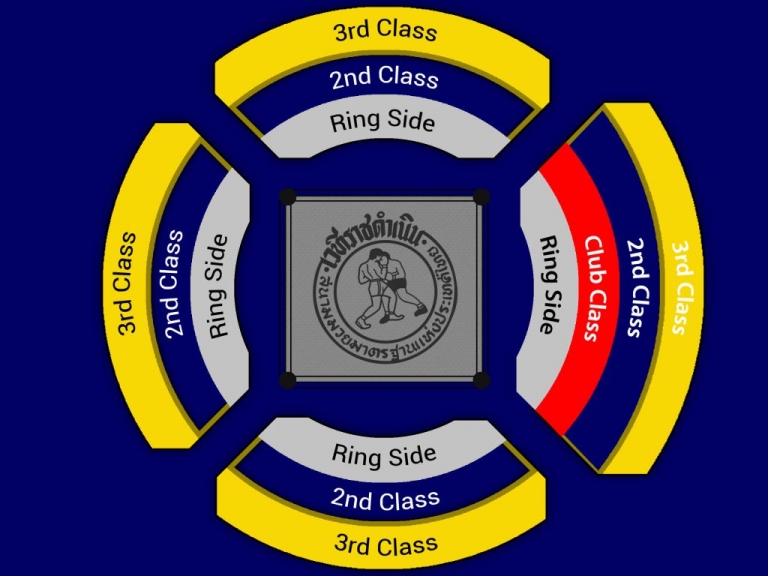 Tickets are VERY EXPENSIVE. Expect to pay around 1500 baht per ticket. I do find it very galling that the Thais can pick up their tickets for as little as a few hundred baht and we found that this tiered payment system is prevalent around Thailand in every walk of life. You either have to suck it up or boycott it. 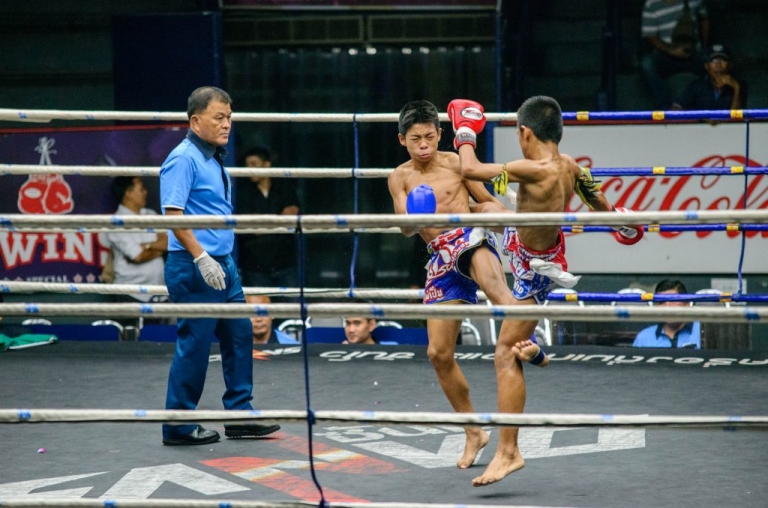 To hawk or not to hawk…

Many people I’ve spoken to about this managed to get their tickets reduced to 1,000 baht by negotiating outside the stadium but they missed the first three fights. 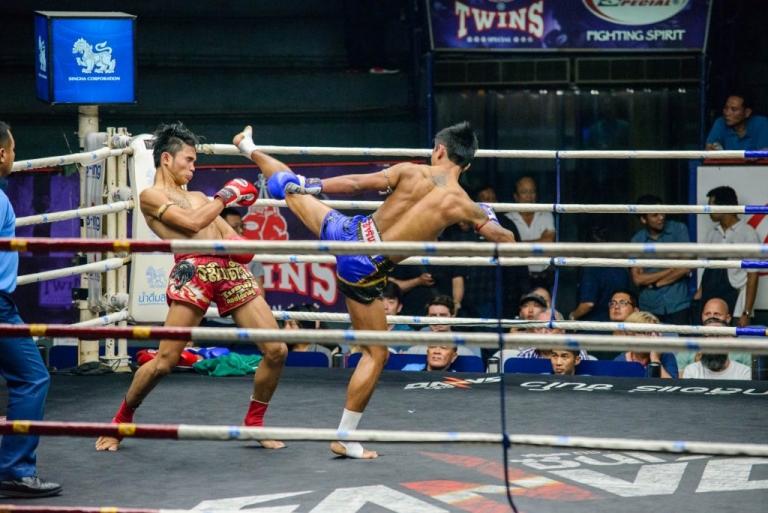 How to get there?

We opted for an easy ride and booked a pink metered taxi. From Bang Rak it cost us 170 baht and took us an hour and ten minutes. I gave him 200 baht to say thank you.

On the way back we caught a tuk-tuk and I negotiated 200 baht. He wanted paying more and tried asking how much our tickets for the muay thai had cost. I feigned stupidity and said my husband had bought them for me so I didn’t know.

BTS: There are two stations relatively close by: Ratchathewi and National Stadium but you’ll still need to catch a tuk-tuk as they’re 4km from the stadium.

Catch a train to Uropong Station and walk the final kilometre. 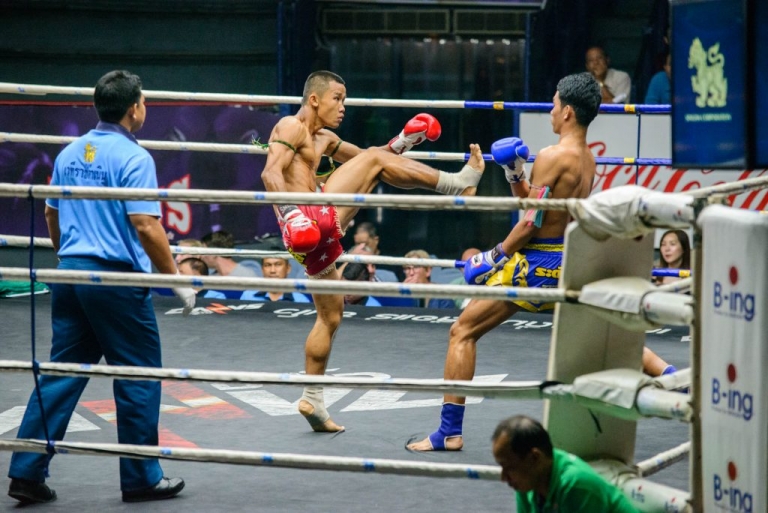 What should I wear?

Anything you like but the more casual the better. If you dress up, you might attract unnecessary and unwanted attention.

Fancy dress? WHAT!? Apparently this is an American tradition but I’d suggest definitely not. Unless you want to stand out?! 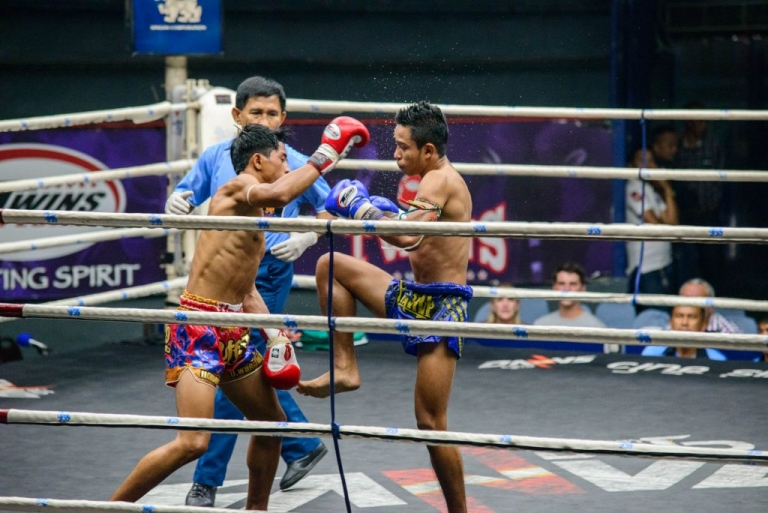 Seating in the arena

The atmosphere definitely comes from the Thai side and don’t be alarmed if the stadium isn’t full when the first rounds start. It will soon fill up. 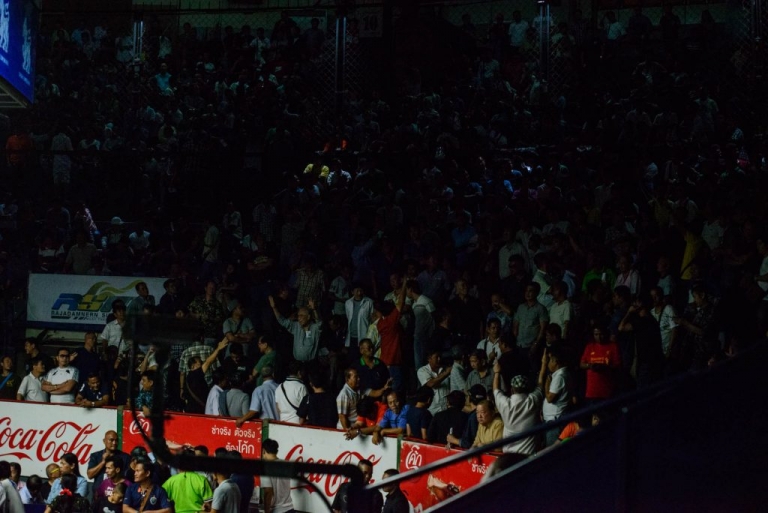 Beer & food are available for foreigners but not for Thais. In your seats you will receive waiter service where you can also order soft drinks, pop corn and junk food. 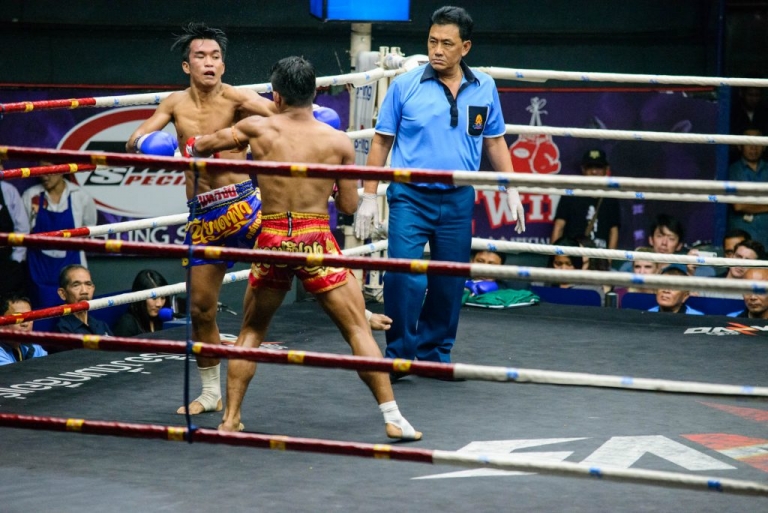 Before the match begins, each competitor will perform a “Wai Kru” accompanied by traditional Thai music. Reasons for doing the performance is to pay homage to the gods and holy spirits for protecting them as well as to pay respect to their instructors and opponent. 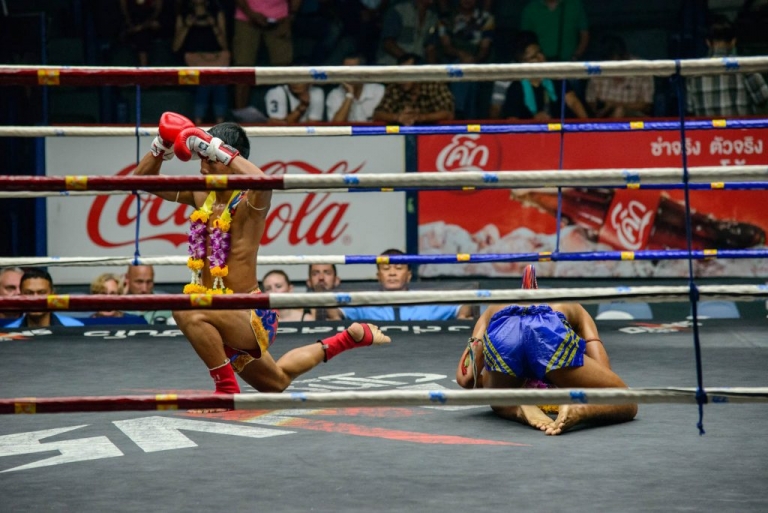 How long do they fight?

Each fight is five rounds of three minutes with a break of two minutes in between. Fighters ranged from men in their mid twenties down to kids of about twelve years. It was brilliant to watch these young and spunky fighters in the arena. They took loads more risks than their older counterparts which sometimes paid off.

There were ten fights when we went and fighting started at 6:30pm. We left the stadium at about 11pm. 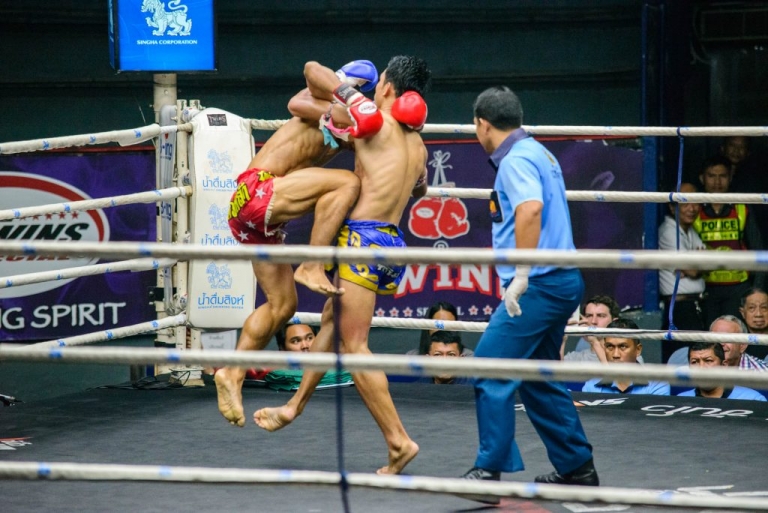 When are fight nights?

Check out the ticket itinerary here. 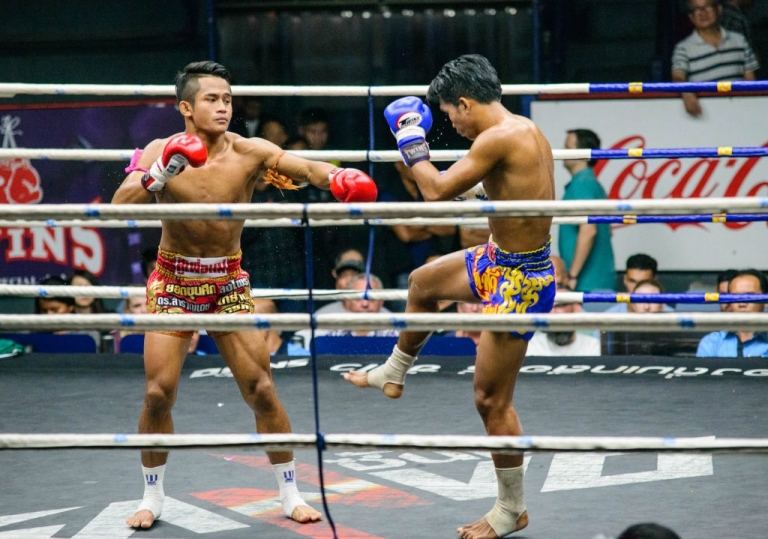 Is it all rigged?

I’ve read a few posts, mostly from disgruntled Brit-immigrants, complaining that the matches are fixed, gambling is too big a problem, fighters are doped and unmotivated and children are exploited by family’s debts.

YES gambling is HUGE and yes all the Thais seem to be gambling but the fighters were motivated and fought hard! I watched the interactions between children, trainers and their families and the few children who fought were definitely in the ring voluntarily.

I don’t feel like the matches were fixed as all the fighters weighed the same but it’s so hard to tell. This was our first Muay Thai live fight so we probably wouldn’t have spotted it anyway. 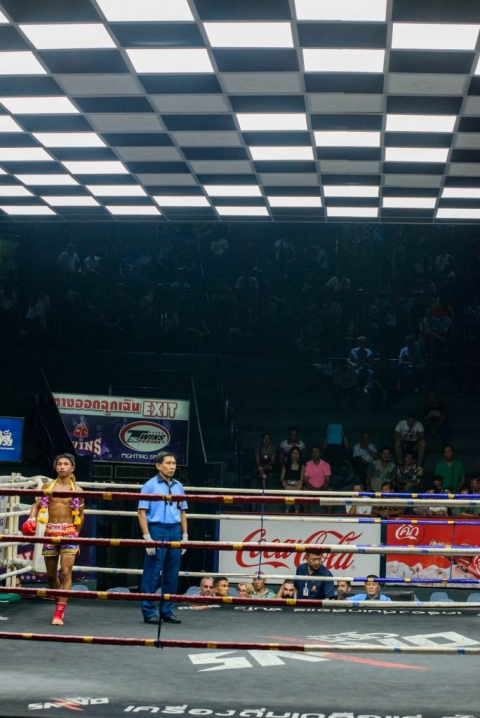 Is it male dominated?

Yes! I would estimate that less than a fifth of people there were female.  It wasn’t a problem for us and I didn’t feel like it was going to be a problem. 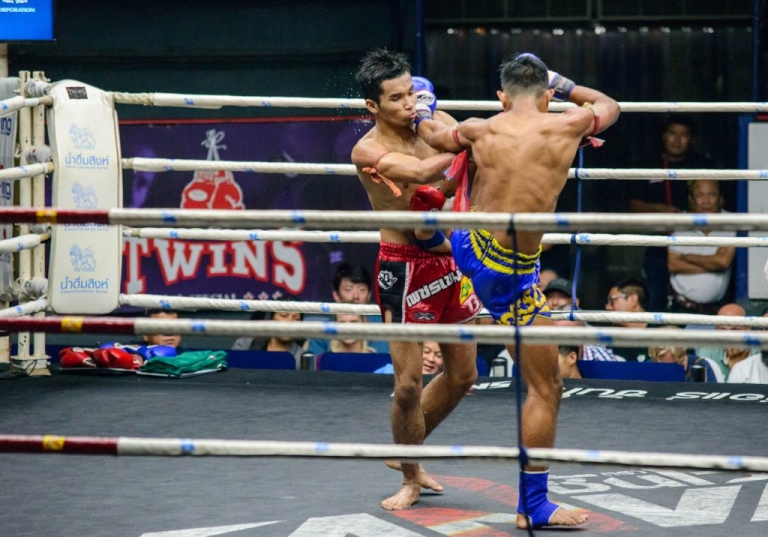 Is it safe for kids?

Absolutely! We had a blast. No foul language, no hooliganism, no fighting, no drunken yobs… it was wonderful.

There was a great atmosphere, lots of energy and chanting that we could join in with.

When we left the stadium the area was well lit and full of food stalls, taxis and tuk-tuks. We picked up a tuk-tuk really easily. 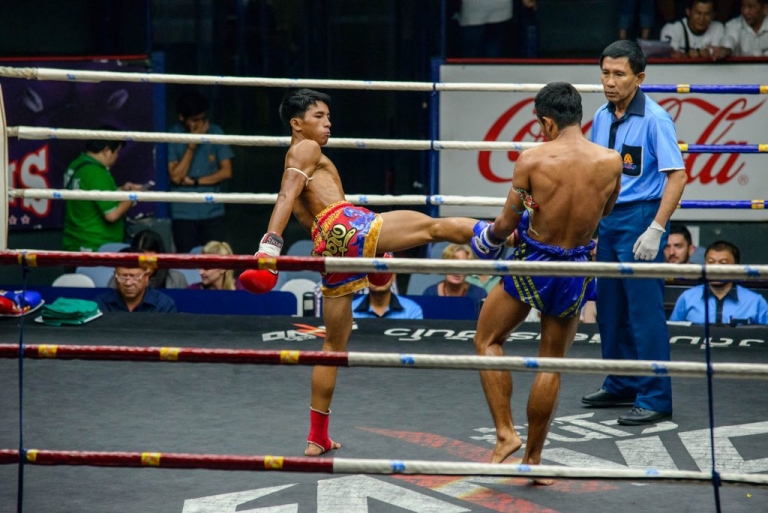 Be assertive with the tuk-tuk

Your tuk-tuk driver will always ask

How much you want to pay?

He’ll ALWAYS pretend it isn’t enough and he’ll always try to increase the price. Just be assertive and if necessary walk to the next driver…

I have found Thailand to be the most tiring of countries with regards to exploitation of tourists. You constantly have to be on your guard. 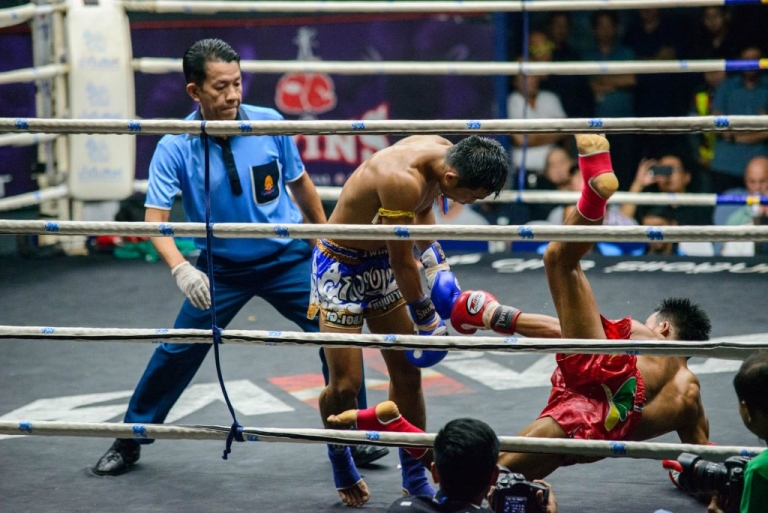 Muay Thai fights can be seen for free in the open area in front of MBK shopping mall every Wednesday from 6 p.m. to 8:30 p.m. The nearest skytrain is BTS National Stadium. You can also easily walk here from BTS Siam. More information and pictures on their Facebook page and their Twitter account @MBKFightNight. 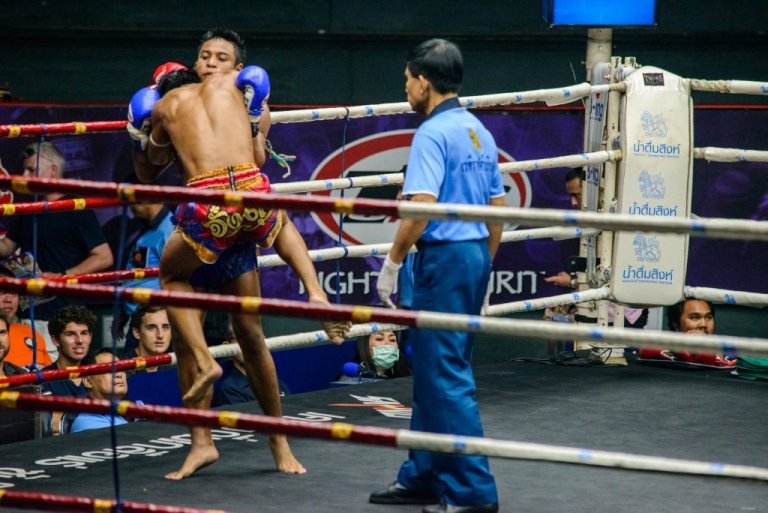 Keep an eye out for our other Thailand posts

After 3 months of fast travelling, we’re finally unpicking our travels, editing photos and starting to blog. Keep an eye out for more posts. 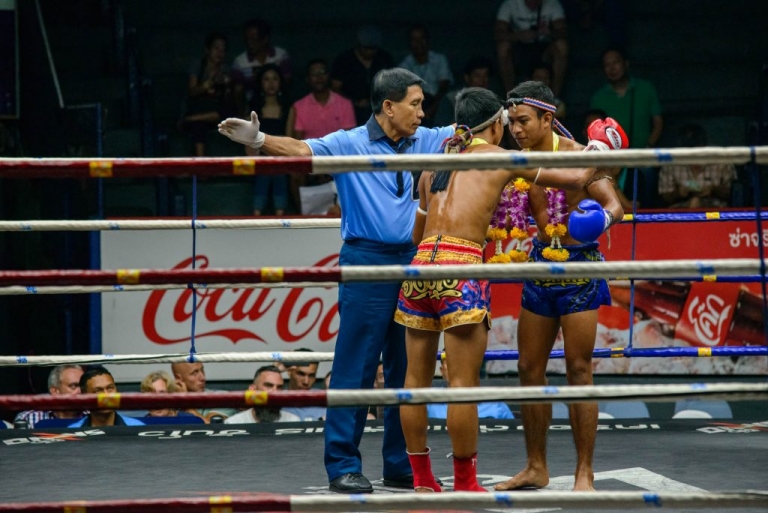 Video from the Muay Thai stadium

Pin this for later 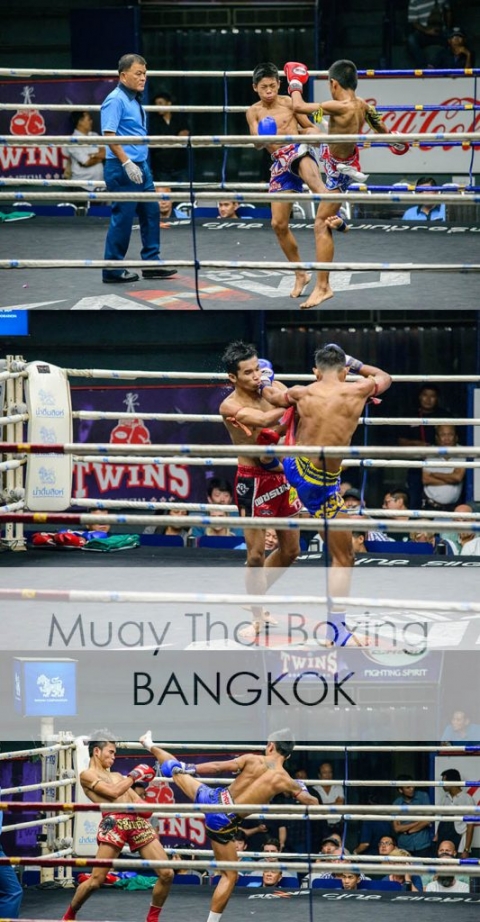