When somebody suggested visiting the Snake Farm Bangkok, I bawled. Why would I want to visit a farm that by the sound of it exploited snakes!? We decided to go and have a look at it and this is our review. If you’re looking for things to do with kids in Bangkok, read on to see what we thought of the Red Cross Snake Farm in Bangkok. 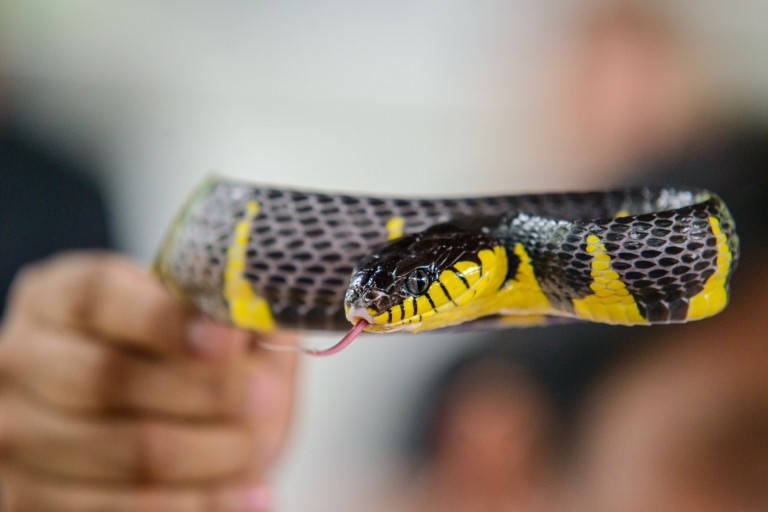 Snake demonstration from the snake farm

We did some further research on the snake farm Bangkok

Upon researching the farm, it appeared that it was part of the Red Cross hospital and the snakes were milked as a part of a necessary research and prevention program.

We love snakes so in the name of animal education we trotted through Bangkok’s noisy and grimy streets to see what the snake farm was all about. 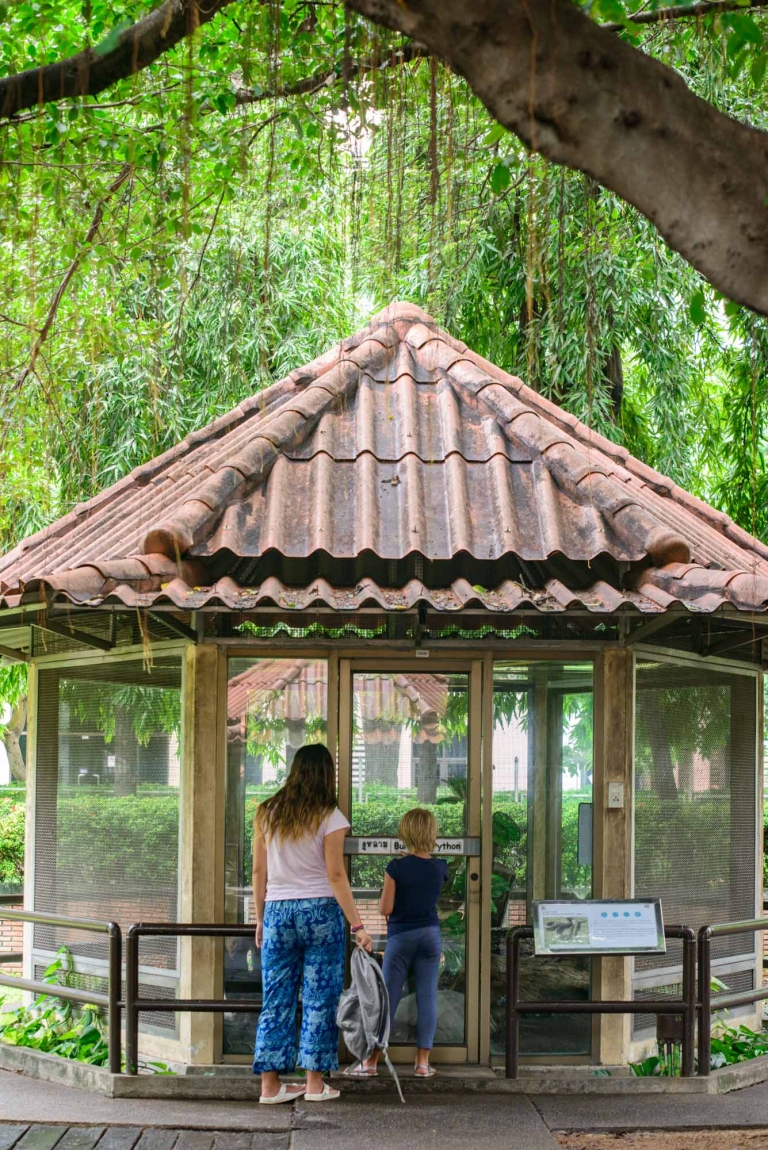 One of the outside exhibits.

What’s the snake farm Bangkok all about?

The snake farm at Queen Saovabha Memorial Institute produces seven types of antiserum and keeps many of the two-hundred species of snakes found in Thailand.

The farm comprises of a large outdoor area which houses snake enclosures and a theatre style seating area for the handling demonstration.

There is an indoor educational facility which houses the snake-milking auditorium and several floors containing educational information on snakes. 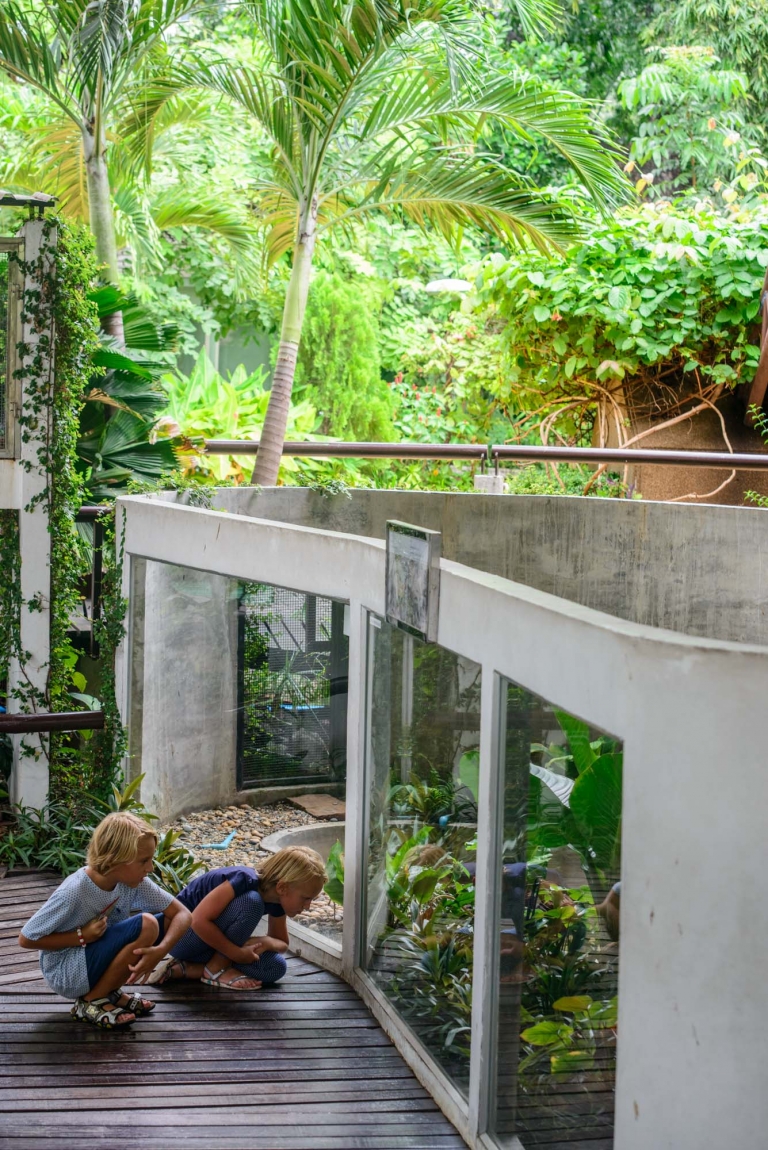 Watching the snakes at the outdoor pit enclosures 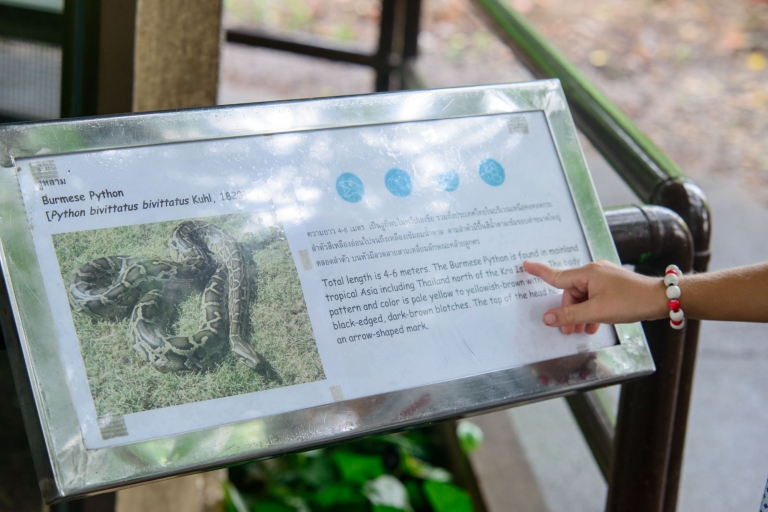 Easy to read signs which were engaging

Where is the snake farm Bangkok?

The Farm is located at the intersection of Rama IV and Henry Dunant roads in the very centre of town, not exactly where you’d expect to find such a large collection of ophidians.

How much do the tickets cost?

Tickets cost 200 baht for adults/teenagers and 50 baht for children. You must pay with cash only. 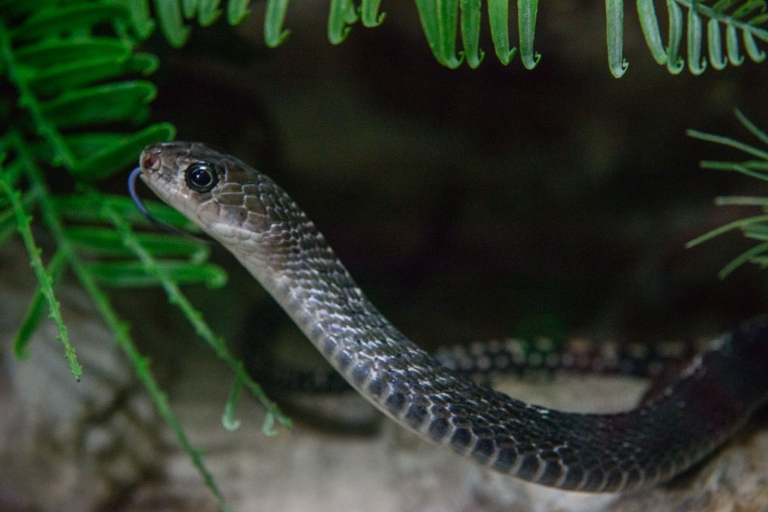 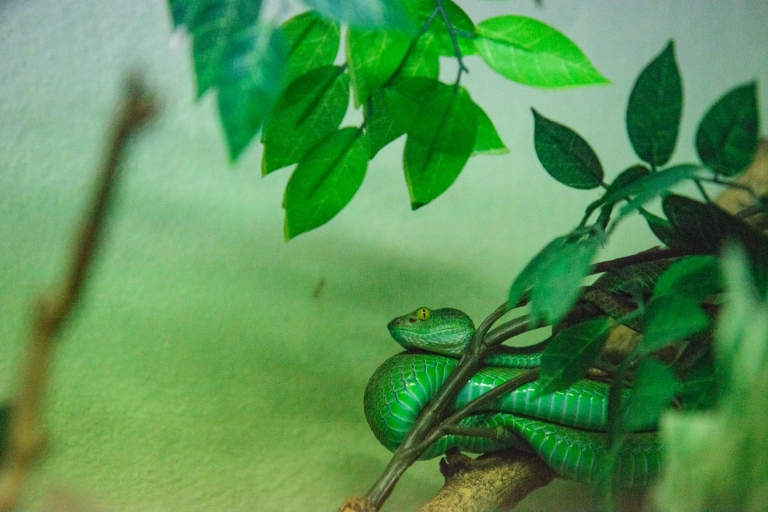 Book somewhere to stay in Bangkok

There are two demonstrative shows per day:

The 11 am milking demonstration is held inside the buildings in what looks like a cross between a science lab and a lecture theatre. The milking area is protected by a thick plastic screen so the general public never come into contact with the venomous snakes. Although we didn’t attend, the venom extraction shows the live extraction of snake venom from the animal’s fangs which is then used to make snake-bite antidotes. It is reported to be educational and fascinating to watch. I’m sad that we didn’t make it in time to watch.

The handling demonstration takes place at 2:30 pm where an hour-long show into venomous and non-venomous snakes of Thailand takes place with commentary in English and Thai. 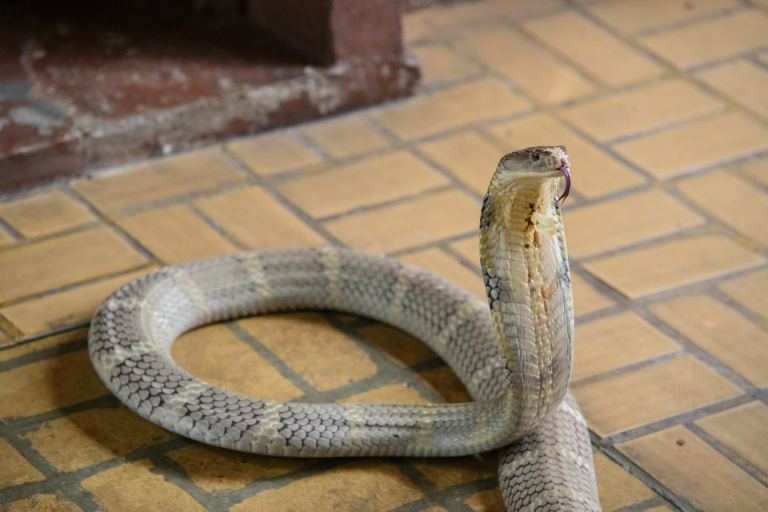 Cobra with its hood up 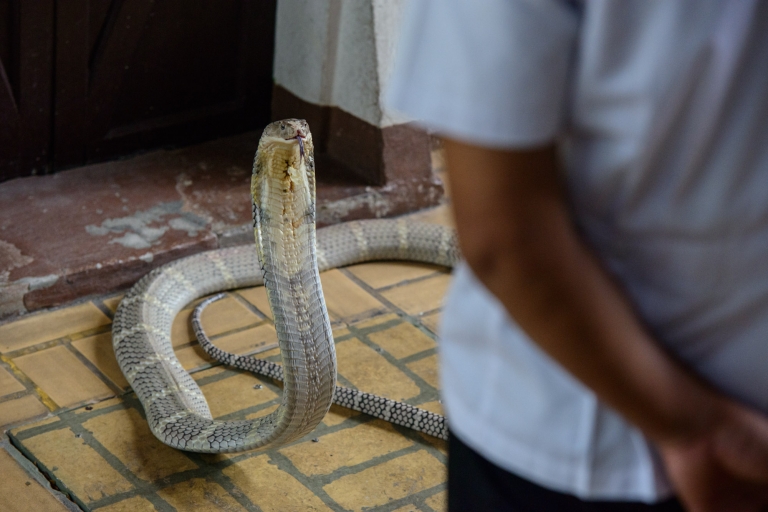 One of the cobras at the demonstration

Visiting without attending a show

You can visit the farm without attending a demonstration. The snake farm is open daily where you can see the snakes and visit the learning centre between 10am and 3.30pm. 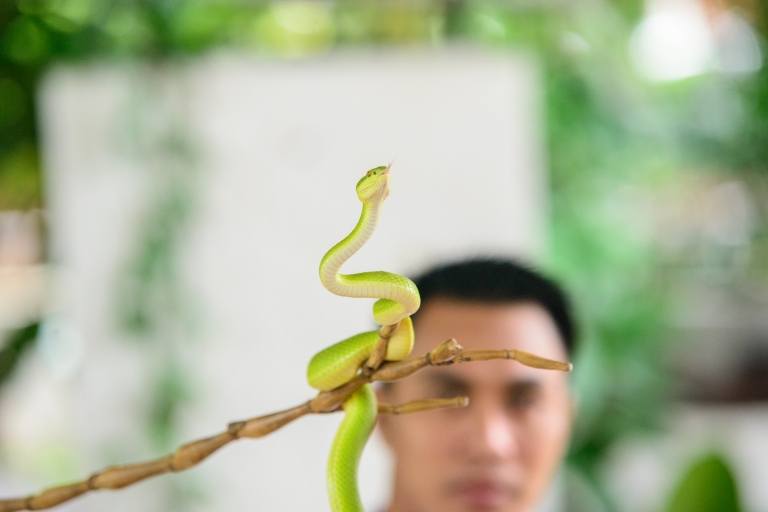 Demonstration from the farm 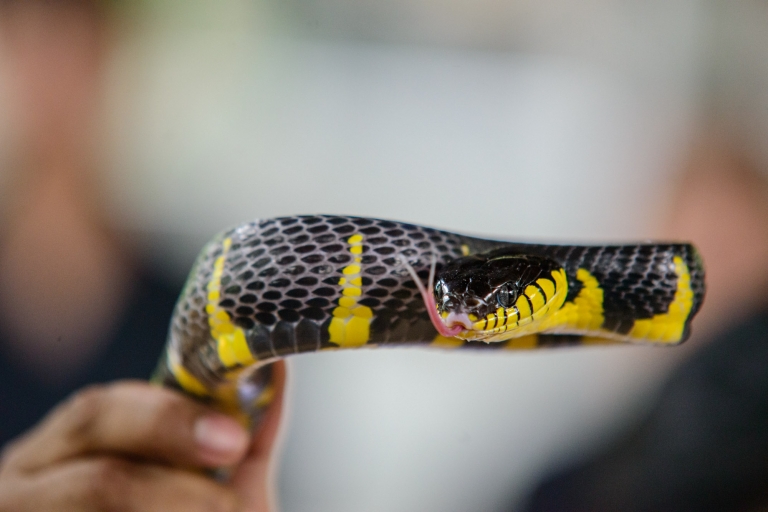 Animals as exhibits; is it right?

I am not a fan of seeing animals inside exhibits and here was no exception. Outside, the snakes were either held inside wooden cages above floor level or in concrete pits at or below floor level.

A small selection of the cages seemed inappropriately small and restrictive for the size of the snake whilst other cages were a good size.

The concrete pits were quite large (about 3-4m wide) with a selection of soil, plants and sometimes pools of water. 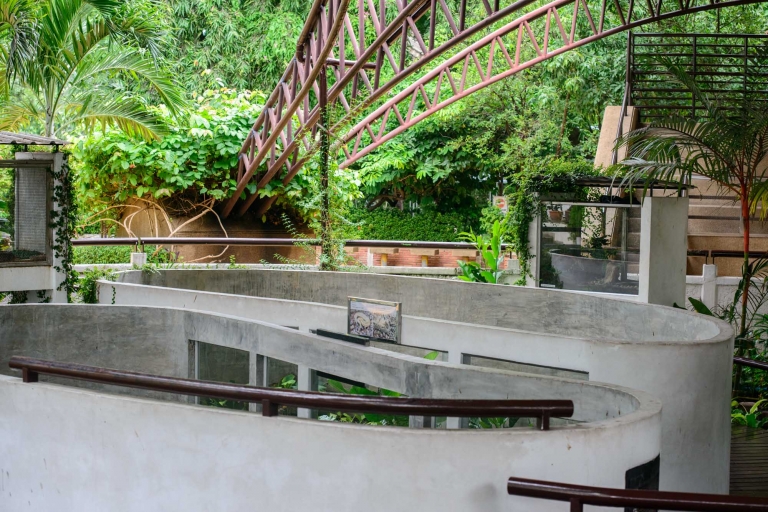 The outside pits at the snake farm 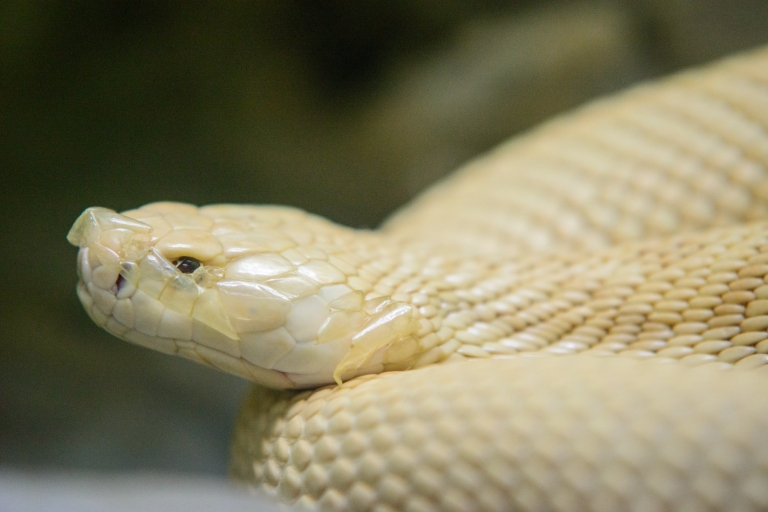 One of the snakes in an enclosure at the farm

How were te snakes treated?

A small number of the snakes in the pits were distressed and trying hard to escape. One snake had rubbed the scales off his face (and it looked like it was bleeding) trying to get through the meshed wire and it was desperately trying to climb up the walls.

Other snakes seemed obliviously happy. One exhibit had hundreds of very small snakes that were coiled around each other and they appeared docile (maybe nocturnal) and happy to nestle together. 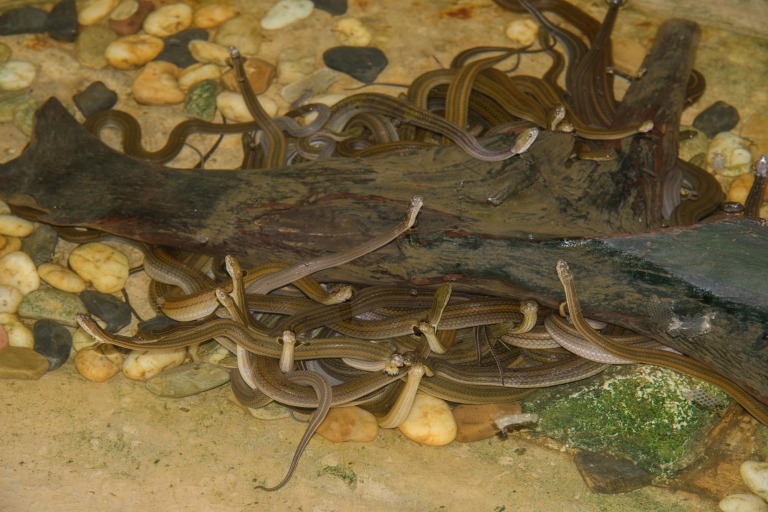 A large number of coiled snakes

What types of snake are there?

The non-venomous snakes such as the rat snake, the elephant trunk snake and pythons are contained outside whilst the venomous snakes are inside in glass enclosures. 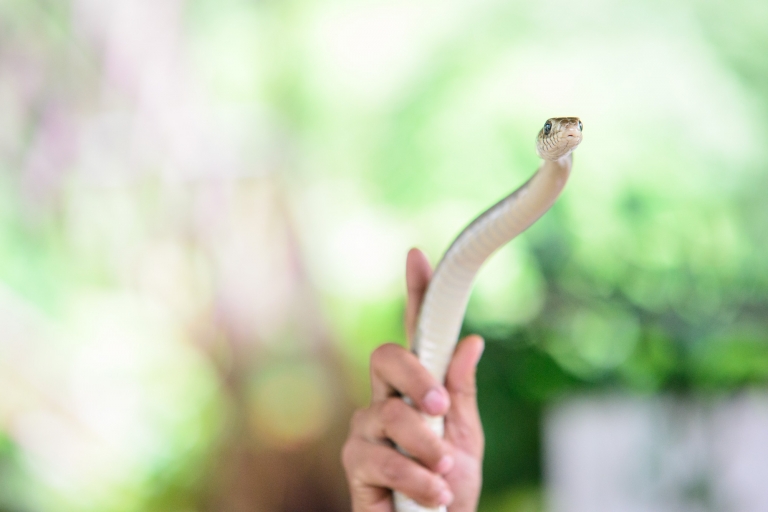 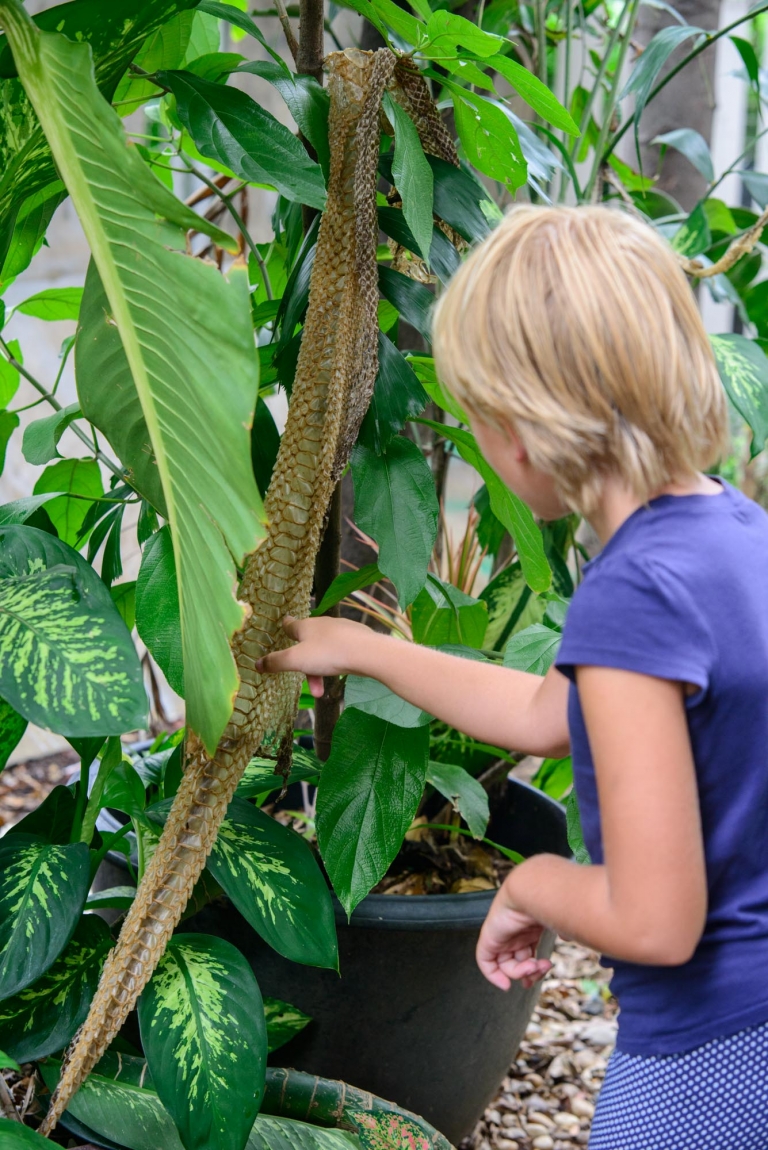 Touching snakeskin at the farm

The signs are not abundantly clear but the big white building is an educational building which comprises of two floors.

On the ground floor are a range of venomous snakes whilst upstairs is information about venom, how it affects the human body and how to best care for a snake bite.

There are sections dedicated to the history and mythology of snakes as well as areas where you can touch skin and see skeletons. 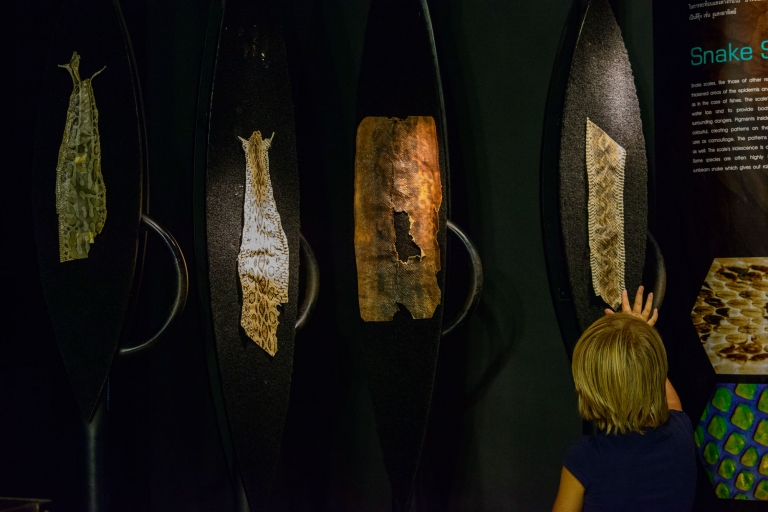 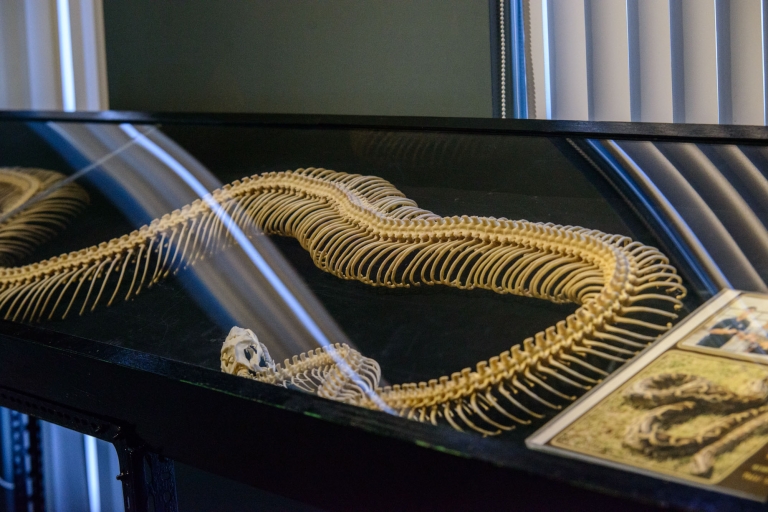 The snake show was BUSY and the entire seating and standing area were crammed full of people spilling out and around the stage.

In my opinion, the show is incredibly informative but I found that the handlers were unnecessarily aggressive (pushing with hands and feet and getting too close) towards the snakes in a bid to antagonise them to hiss for the audience. 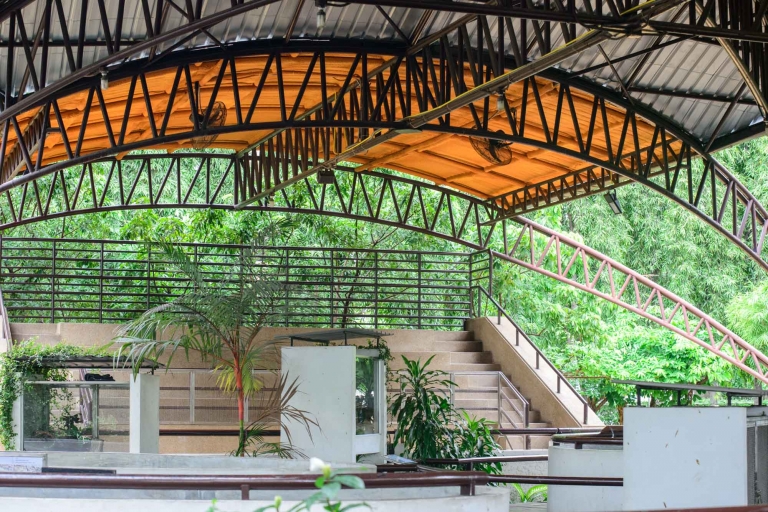 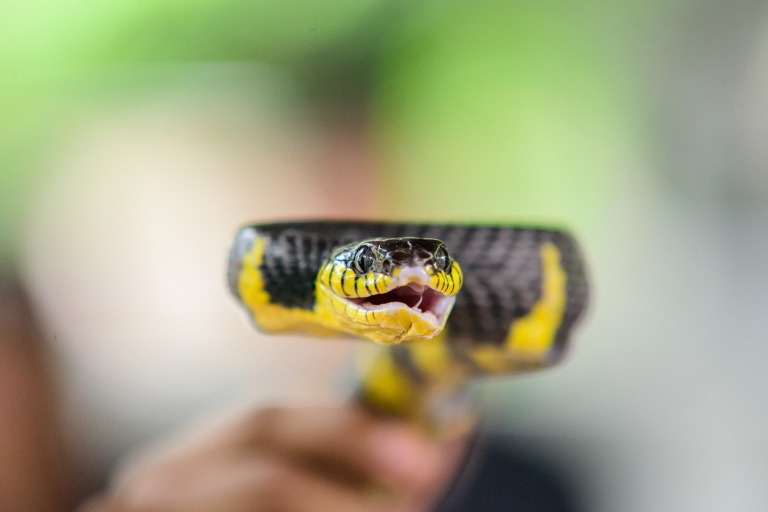 Demonstration at the Snake farm Bangkok

My thoughts on touching the albino constrictor

The handling demonstration culminates with the production of a yellow albino boa constrictor and people are given the opportunity to handle it.

72 different people all with different germs, different skin and hair products, different perfumes and body sprays all touched the snake and had it draped over their bodies. One woman even brought her take-out chicken lunch with her wrapped up in plastic bags. I can only imagine how tempting that must have smelled for the poor snake.

The poor snake looked utterly bewildered by the end of the demonstration and I can’t believe that it was in its best interests to have that much contact with humans. 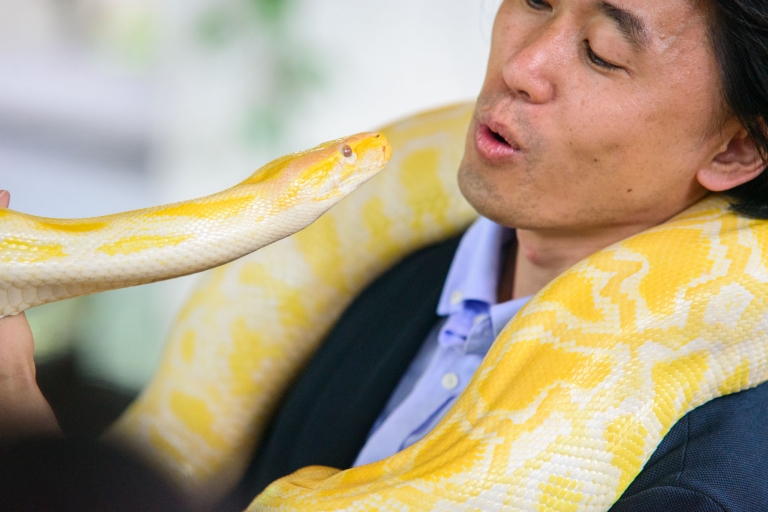 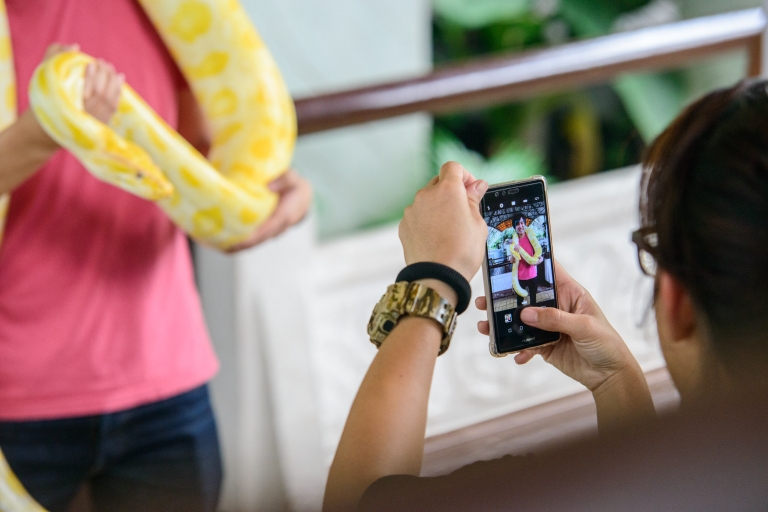 Did the farm PR woman lie to us?

We raised our concerns over the albino snake with the PR lady and she told us not to worry because they have over TWENTY albino constrictors who all looked the same. Twenty fully grown, albino snakes.

Suspicious? Yes, but I couldn’t find any staff members to ask. Quite frankly I don’t believe her and I think this is another example of how Thai culture abuses animals for human entertainment. 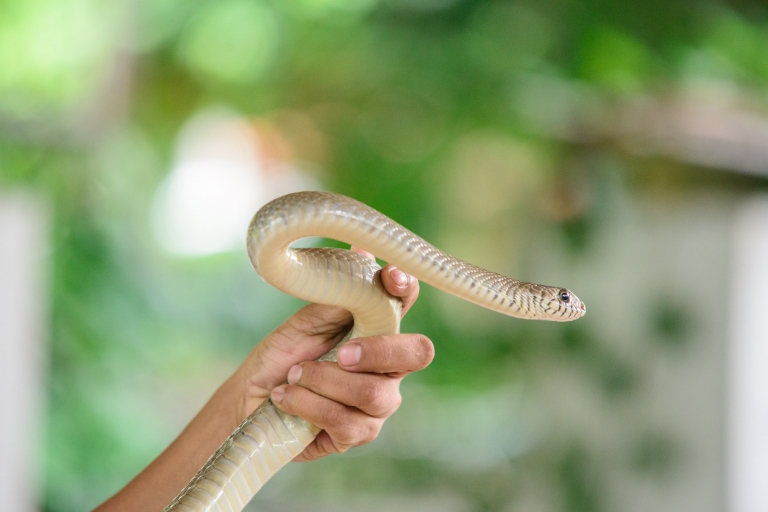 The education building is incredibly informative and we were able to learn much about snakes, their venom, how it affects our blood and what we should do in case of an emergency.

We also learned that snakes are an essential component of our eco-system and that the vast majority are harmless to people.  All the literature was easy enough for the kids to understand and engaging enough to keep them wanting to learn more and spend longer there.

The handling demonstration was fascinating and it’s great to know that many snakes are an essential element for our lands however I feel it’s unnecessary and cruel to provoke them for human engagement or enjoyment.

I would never recommend that you handle an animal unnecessarily though and I do think in this instance that handling the albino snake should be avoided. 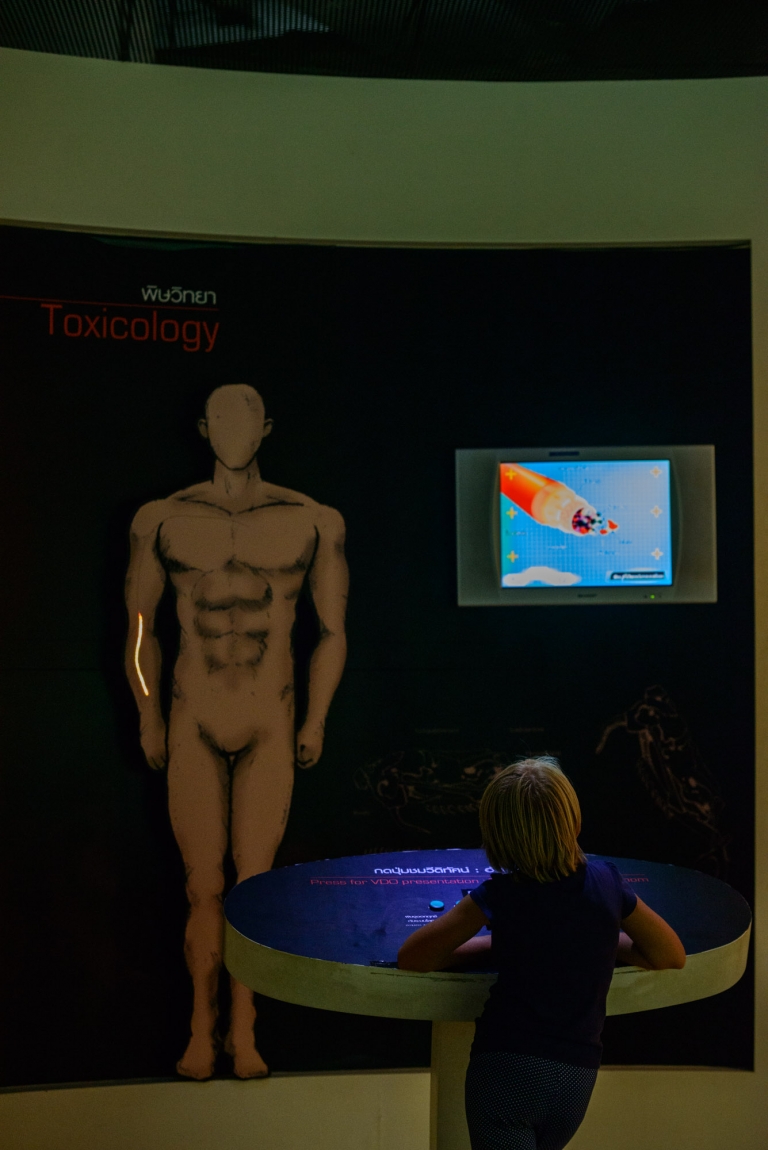 What’s it like to visit the Snake Farm at the Red Cross hospital in Bangkok?

Other things to do in Bangkok with kids