654 steps to Neptune’s Cave in Sardinia

Neptune’s Cave sits on Sardinia’s north-western tip and is the most famous of Sardinia’s multitude of caves. With 1308 steps down and up, it will certainly give you a work out!

If you’re looking for interesting, relatively cheap and child friendly activities to do whilst on Sardinia, the caves are intriguing in a goblin type of way! And you don’t even have to walk down the steps, if you don’t want to but it is a great way to wear out the kids!

Read on for more info.

Where is Neptune’s Cave?

The cave, like many others in the region, sits on the north-western spit of Sardinia near Alghero and Bosa. We spent just over a month on Sardinia so if you’re looking for more suggestions on things to do, don’t forget to have a look at our other posts at the bottom of the page.

We really liked Sardinia and would recommend it to families as a wonderful place to both holiday and live.

For those wishing to walk down the steps, there is no specific car park. Parking is on each side of the road. We did see an RV attempting to turn around close to where the steps start and having some difficulties due to its size.  There were some considerable road works happening whilst we visited so it’s possible a new road or car park is being built.

I would not recommend parking in the car park if you wish to climb the steps – unless you’re looking an ultra workout?!

Don’t want to climb the steps?

If you really don’t want to climb up and down the steps you can arrive by boat straight into the cave’s entrance. Just follow the signs for the car park and boat.

The cost of the boat in 2018 was €10 and it takes approximately 15-30 minutes to arrive with boats leaving every hour in the summer but ony a few times a day in spring and autumn.

The boat cannot work during bad weather due to difficulty docking at the cave’s mouth. The boat fee does not include the entrance fee, which is additional.

There was a lot of work going on at the top of the descent for caves and the wooden shack for paying was closed. So we had no option but to climb down the 600+ steps and enter the cave.

As a family who doesn’t do cash, we only just about managed to scrape enough coins together to gain entrance. Thank goodness, because those steps were steep and there was no cash machine in the vicinity.

The cost was €13 for adults and €7 euros for children.  Entering the cave is by tour only which is conducted in a multitude of languages. Tour groups can be quite big and I think our group was about 30 people although I have been warned they can be as large as 200!

Two other caves sit nearby, the “Green Grotto”, which is not open to tourists, and the Grotta di Ricami, which is only accessible by sea. This area of Sardinia is also famous for its underwater caves which are reported to be a paradise for scuba-diving fans. The biggest and most famous marine cave is Nereo. Sadly we visited at the height of winter, which was still a balmy 20+ degrees but the sea was too rough for diving.

So why visit Grotta Di Nettuno?

The history of the Caves of Neptune date back to prehistoric times. Several Neolithic tracks found within the caves suggest that about 2,000,000 years has passed since their formation.

How do we know this? The stalactites and mites only grow ONE MILLIMETRE per year.  When you see the sheer scale of the stalagmites and  stalactites down there you will be speechless.

The stairway was cut into the cliffs in 1954, the 654-step escala del cabirol (goat’s steps), leads from the top of the cliff down to the entrance in staggered sections of varying degrees.

On your way down the steps give spectacular views over the blue bay of Porto Conte and the vertical cliffs of Capo Caccia but do expect to be slightly out of breath!

Going down was definitely easier than going up and although our kids ‘won’ on the way down, it was us adults who managed to climb up quicker on the way back!

You might want to take a bottle of water down with you.

The entrance to the cave lies at sea level, at the foot of the 110-metre-high Capo Caccia cliffs and the cave can therefore only be visited when the waters below are calm. When the waves are rough, they batter the entrance and fill the internal lake.

Tourists visiting the cave are only allowed to visit whilst being given guided tours and are not allowed to go off alone and explore.

Groups are led single-file through a horrendously, orange-lit pathway, with the tour guide providing information about the cave. I didn’t really manage to get any nice photos of the cave due to the awful lighting and shadows cast around but the cave is huge and breath-taking.

If you want to hear the tour guide, you should try and get to the front of the queue otherwise you’ll be scrabbling to hear what she’s saying. For some reason the caves did not provide an acoustic boom or magnify her voice. If anything she was ridiculously quiet although we were at the back of the group.

Which one is which?

There is a very easy method and saying to remember which growth is a stalagmite and which is a stalactite… This makes our kids laugh but it’s very effective.

Mites go UP and tights go DOWN

The set of a movie

For two months, Neptune’s Grotto was the set of a movie called Island of the Fishmen (L’isola degli uomini pesce).  The science fiction movie was filmed in the summer of 1978 with the movie based in 1891.  No surprise that the plot is about a fisherman washed ashore after a shipwreck.

I watched a section of the movie on YouTube and it was terrible! 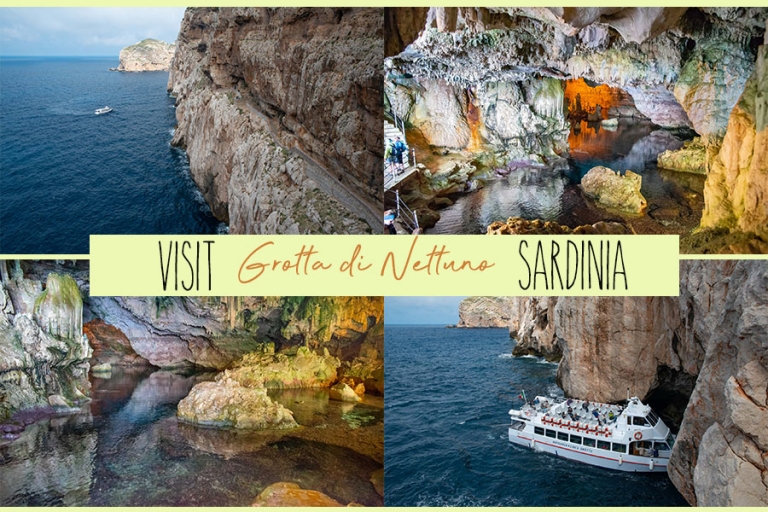 Do you fancy visiting Sardinia? Here’s some of our other posts from this idyllic Italian island.