Ovech Fortress: What Happens When You Take Minor Roads!

My love for following minor roads and bizarre turn-offs has led to a few problems. Like trying to 4×4 in a crappy 1 litre rental car, almost getting stuck under a bridge, attempting to gain entry to a military base, being sandwiched in a narrow tunnel, getting lost in some scary looking places and almost driving into a hidden river but it’s also been how we’ve discovered a ton of off the beaten path delights. Ovech Fortress near Varna, Bulgaria is one of those places. So if you’re looking for somewhere different to visit on your trip to Bulgaria, read on.

We Stumbled Across Something Different

Originally I think we were driving along towards Provadia when I saw the Rock Monastery Shashkanite. Whilst I was trying to work out how to get there (Rich refuses to stop now whilst I am trying to map read different routes – maybe through fear of tiny, off-road paths) I saw Ovech Fortress and decided it was easier to get us there instead! It was probably part of a grand plan I had to surreptitiously take us back to the Rock Monastery but I think it was foiled by the kids!

Get free withdrawals overseas with Revolut

The town of Provadia has roughly a fifteen century history behind it, although it’s difficult to tell from just driving through. It is believed that it was once formed as a Byzantine fortress against the martial tribes invading from the north.

Provadia is now, like many Bulgarian towns, a mixture of bungalow-style, red-roofed, family houses and old Soviet-style blocks of run down and uninspiring, grey concrete, flats.

The town sits in a slight valley, engulfed on both sides by white, stone cliffs and wild & unkempt bushland. Like many semi-rural places in Bulgaria it has an eerily, squalid feel to it. In many respects Bulgaria is totally different to any other European country we’ve visited; its culture and language (and alphabet) much more inline with Russia and this makes it more difficult, certainly more time-consuming to try to understand.

We book all of our budget accommodation with booking. You get all the quality but for half the price

Perfect Positioning For A Fortress

Ovech Fortress is located on the Tabiite stone plateau high above the town of Provadia; 53 km west of Varna and 410 km east of Sofia.

The remains of the ancient fortress have prime location situated on the high and flat hilltop, surrounded from all sides by valley or inaccessible rock cliffs. It’s not hard to see why it was chosen as a site.  From up there, there is a 360 degree view of everything below.

Archaeological research has established that the fortress was used in select periods from the 3rd century to the first decades of the 7th century. After this the fortress become inactive for nearly a century. It was destroyed by either the Huns or the Goths, there are no definitive historical sources to confirm which. The Slavic tribes moved to Bulgarian land in around 640 AD, closely followed by the Proto-Bulgarian tribes who founded Bulgaria in 681.

It was then used again from the 10th century until the end of the 17th century. This period is called the Second Bulgarian Kingdom when the Fortress was used as an important administrative and military centre defending the first Bulgarian capitals of Pliska and Preslav.

The fortress was inhabited by Thracians, Romans, Byzantines, Bulgarians and Turks. It is related to the reign of Tsar Ivaylo (1277 – 1280), the crusade of Amadeus IV, the Count of Savoy (1366), and the crusade of Vladislav Varnenchik (1444).

The Byzantines used to call it Provat meaning a gorge, at the end of the XI century the Bulgarians changed the name to Ovech (meaning Ram Fortress) possibly due to sheep-breeding in the region and the Turks called it Tash Hisar (which translates from Turkish as stone fortress).

Get a flight quote with Skyscanner

The Fortress Was Only Recently Re-Discovered

Ovech Fortress was eventually captured by the Ottomans who used it until the 17th century and then abruptly abandoned it. For centuries the fortress was left to ruin from the natural destruction of the elements – who knows why?

The fortress was recently re-discovered after drone footage appeared on social media and in recent times the metal staircase was installed yet very few people actually visit. It was mostly locals only when we visited and we were definitely the only English-speaking tourists which was nice.

The Three Entrances To The Fortress

The fortress has three entrances:

None of these entrances are wheelchair friendly and the entire site is steep and uneven to walk.

What Remains of Ovech Today

There’s not a huge amount of the fortress remaining but what there is gives you an idea of how imposing a structure it must have been.

For kids it’s cool to experience the height of the plateau, the view of the surrounding countryside and to hide in the Friar’s holes. There’s also a 79 metre deep well that still has water in it. There are the ruins of a church, a knight’s prison, the devil’s path,  some turrets, one of the stone gates, remains of prison buildings and some marble columns. The only part that has been fully restored is the bridge structure between the fortress and the plateau Tabiite.

When will you book your trip to Bulgaria?

Check Out The Drop

If you’re taking small children I’d definitely keep an eager eye on them as there are no barriers or fences and the drop is significant! There are a few signs warning you of the steep cliffs but you can lean over anywhere you like.

Thankfully the words “If you fall over the edge you will die a horrible death” have quite a calming effect on my kids!

How Can You Visit?

I am informed that the fortress is open all year round between 8am and 6:30pm. I think we paid 2 LV entrance fee for the adults and nothing for the kids.

You can add this image to your Pinterest board, if you’d like. We’d love it if you did! 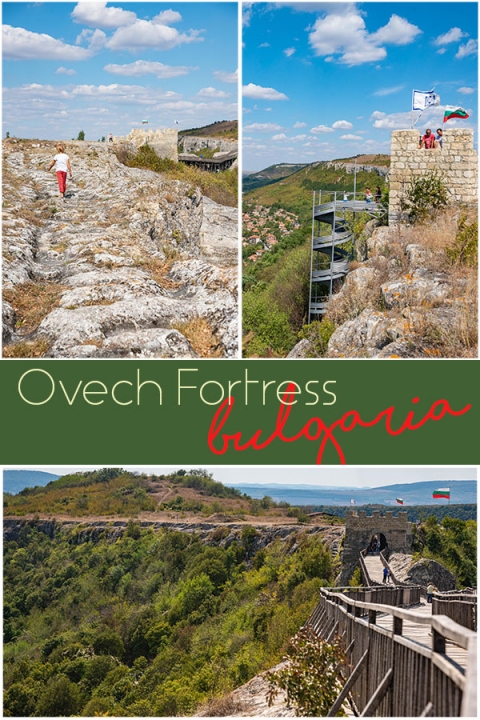 What Else Could You Do In Bulgaria?

Spread the love
Posted in Bulgaria
« 358 Sweltering Steps Up Phnom Banan To Reach Prasat Banan; 15 Photos
The Relocated Temples Of Abu Simbel As A Day Trip From Aswan With Kids »