On the outskirts of Battambang in Cambodia, it’s a long and hot 358 stone-step walk up to reach Prasat Banan. However we think it’s worth it and we’ll try to explain why.

Prasat Banan was constructed in the 11th century by Udayadityavarman II, although this now mountaintop Angkorian ruin saw a Buddhist makeover during the 12th century and the reign of Jayarvarman VII.  The original Hindu temple dates back to 1050 but it was later rebuilt using the same sandstones around 1219.


At the base of the mountain you are faced with a steep laterite staircase flanked by nagas and to reach the peaceful serneity of Wat Banan, you have to walk up approximately 400 meters and 358 painstaking and sweltering steps! You might be met by an eager drinks seller half way up so take some coins with you.

There are currently five, precariously balanced temple-towers and several impressive carved lintels remain above the doorways and bas-reliefs on the upper parts of the central tower. Not bad for an 800 year old pile of stones.

Phnom Banan has been the subject of heavy looting but remains mostly upright, if a little teetering in places. Just watch your head.

We know from Henri Mouhot (the French man who re-discovered the temples) that in the 1800’s  there were numerous Buddha statues inside the temples and a huge guardian statue at the entrance.

Due to some serious looting over the last few centuries there are only half a dozen in the centre spire, where devout Buddhists still come to receive a blessing from the resident monk who seems to live up there in a hammock. You might hear his radio before you see him.

It is not uncommon to see local families having hauled up their picnic with large pots of curry and rice and with additional bags full of food and drinks, enjoying the peaceful views atop this national monument.

From the mountaintop are superb views across the surrounding countryside, with small villages dotted through the endless rice paddies which are punctuated with the characteristic sugar palm trees. To the south you will see Crocodile Mountain and to the north west Phnom Sampeau.

Little known or visited is the cave at the bottom on Phnom Banan. The old name for the cave was Cave of Sacred Water and it is believed that drinking the water that drips from a stalactite inside the cave will bring knowledge of the past, present and future.  I’m not convinved by this and think that legionnaires or SARS would be more probable!

The present name of the cave (L’Ang But Meas) means Walls of Gold. Alas we didn’t stumble upon any gold although a beam of light penetrates from a opening in the cave’s roof. This cave will not be for everyone though as you do have to scramble into the cave on your belly through a very tight opening. Don’t wear your best whites! 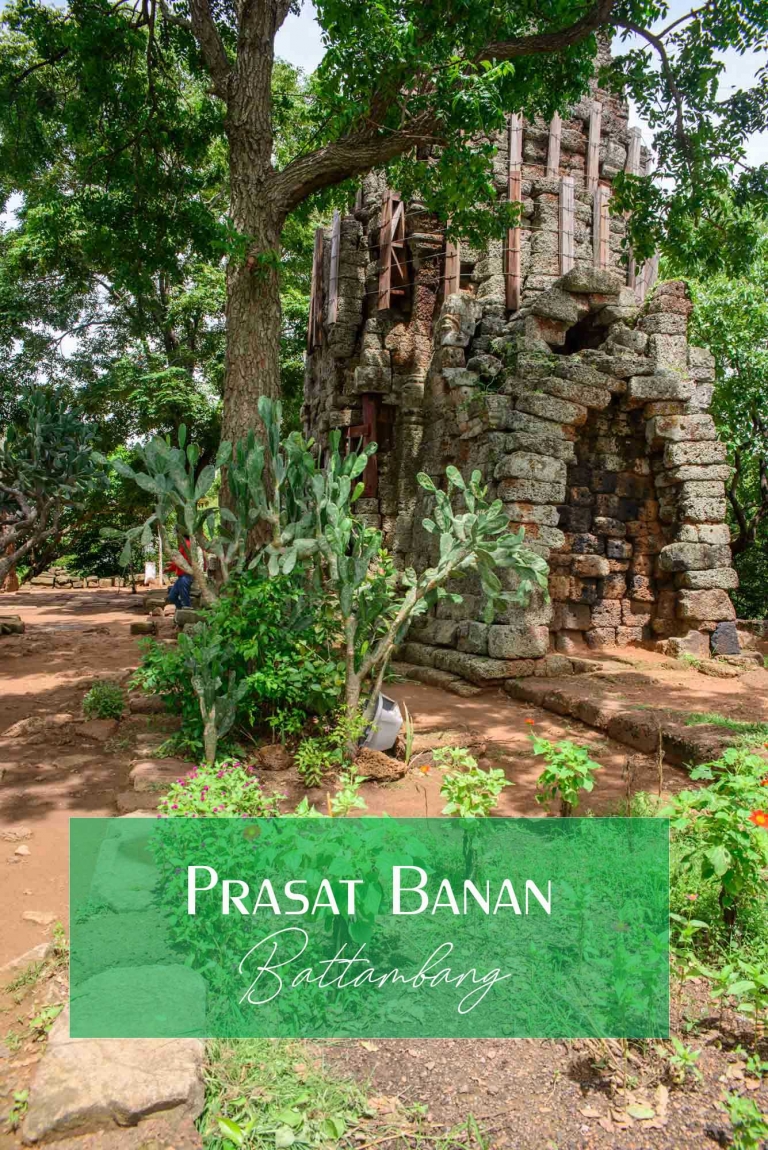 Spread the love
Posted in Cambodia
« 20 places to eat vegan with kids in Norwich
Ovech Fortress: What Happens When You Take Minor Roads! »