From the moment I saw a photo of Punta Molentis, I knew that I had to visit.  If there is any definition of paradise, most of southern Sardinian beaches would fit the description, however Punta Molentis just exceeds all expectations!

The name originates from the word donkey (su molenti, in Sardinian dialect) who were employed here for the extraction of granite when it was mined. There is still evidence of mining around the southern tip of the peninsula which I am guessing has been undertaken or left to protect the cove from being washed away.

Behind the sandy shore there is a hill where there are ruins of a nuraghe (a type of large tower-shaped stone structure found in Sardinia, dating from the Bronze and Iron Ages). Surrounded by rocks, cliffs, granite boulders and typical gentle slopes of the area , this secluded beach with its bright white sands and shallow waters is as good as it gets.  Punta Molentis beach only spans approximately 350 meters but it is surrounded by small, rocky coves and the depths of the ocean (which you can also swim in and jump off the rocks) lay to its east.

If you are a beach lover and  you want to relax and swim in crystal clear waters whilst imagining that you’re in the Caribbean, this is the beach for you!! I mean, who needs the Caribbean when you have this?! 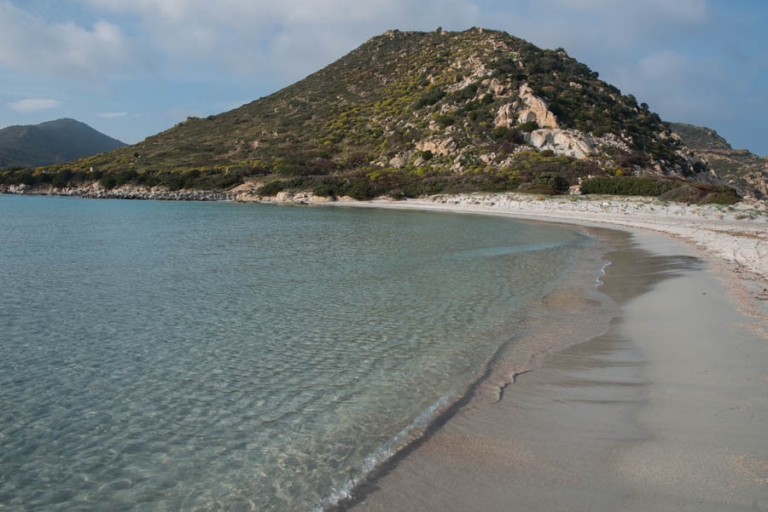 After parking up the car (of which there’s loads of spaces) rather than follow the path to the beach we decided to drop down onto the rocks and explore the cove areas. 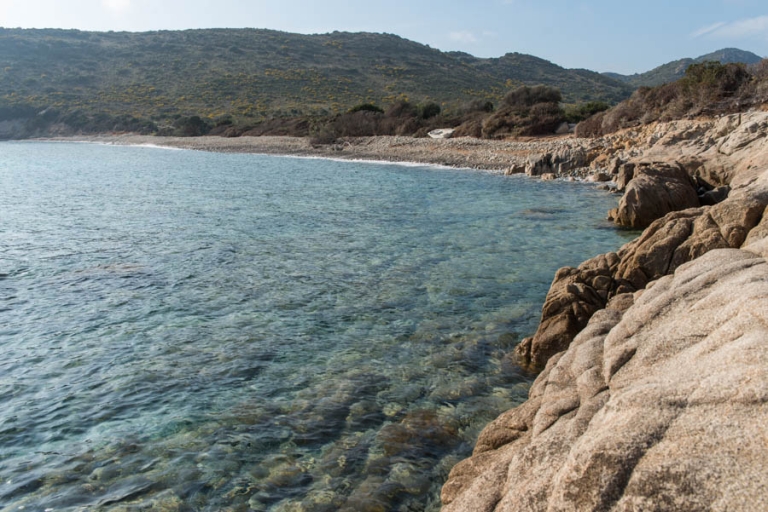 The rocks aren’t particularly steep but are nicely spaced apart to allow for jumping and the water is crystal clear. We’re currently in spring and the average daily temperature is about 18-22 degrees C. It’s not cold but I certainly wouldn’t describe it as hot either!

Of course it didn’t stop the kids stripping off to their underwear and getting in… I’m hoping we’re not the only family whose kids do this? 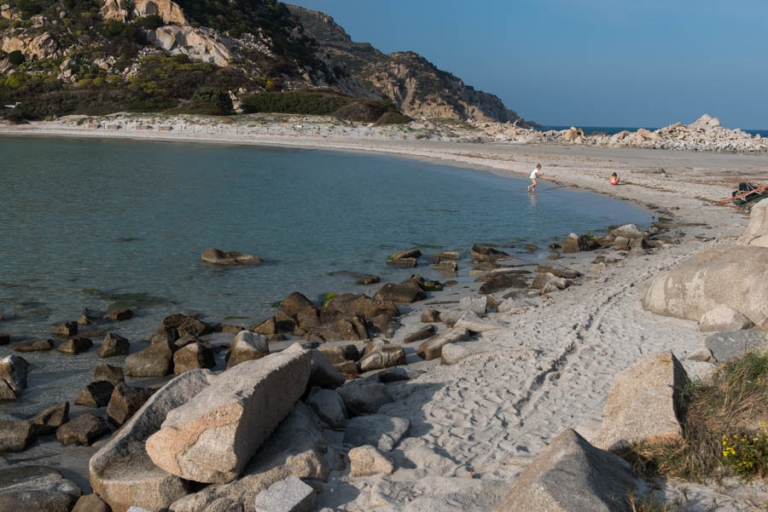 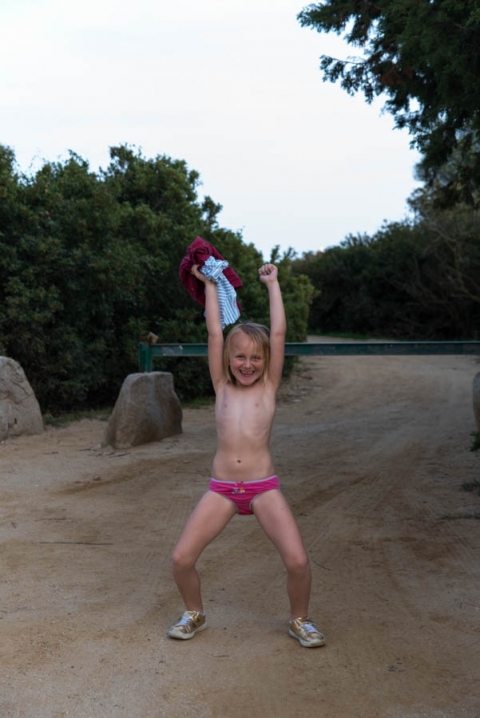 Anyway back to the rock pools!

Climbing the rocks was great fun and there’s a considerable amount of marine life to spot too. We were surprised by just how many fish there were to spot.

Being out of the season the beach is very quiet and we only saw one other couple sunbathing and later a duo of male travellers taking photos. 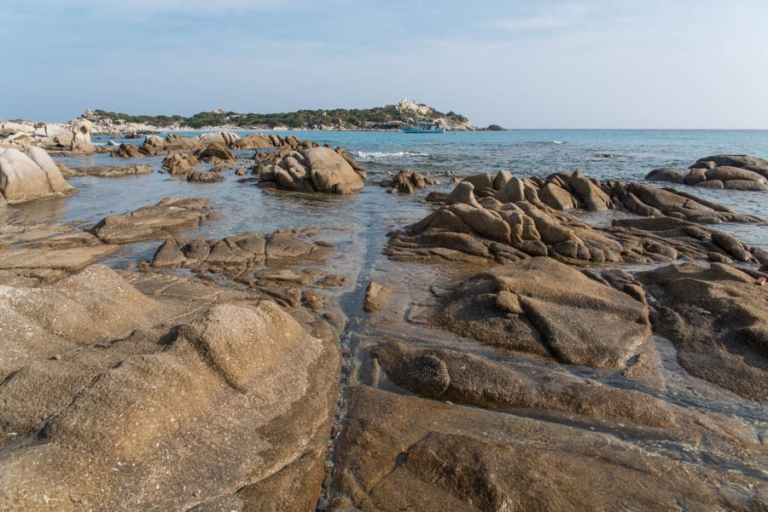 Water channels in the rocks 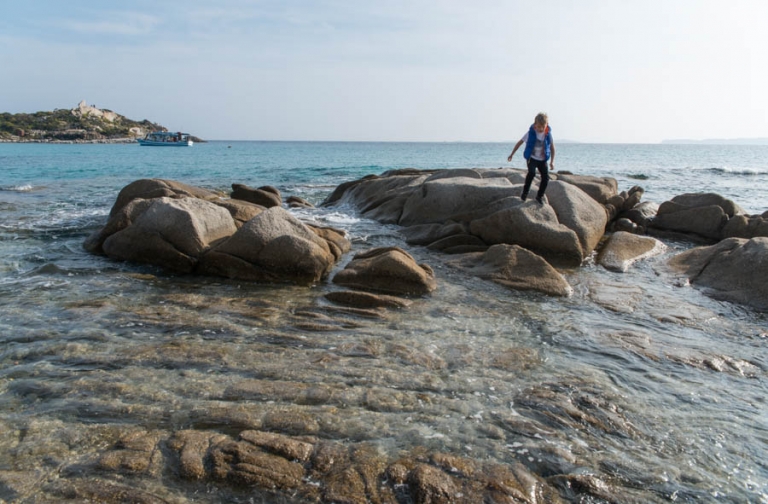 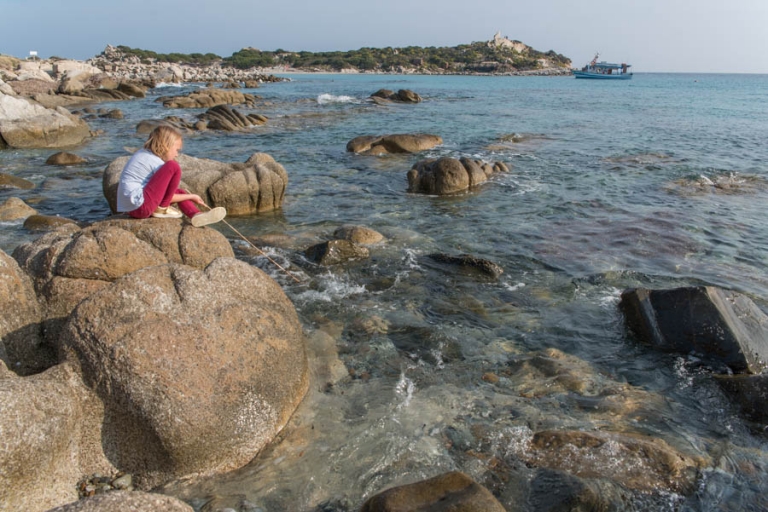 The rocks eventually give way to a half crescent shaped beach of sparkling white sand and turquoise, shallow waters. The waters appear very safe and snorkelling would be an absolute joy.  I am also told that you can scuba dive in this area by catching a boat from the port in Villisimius. 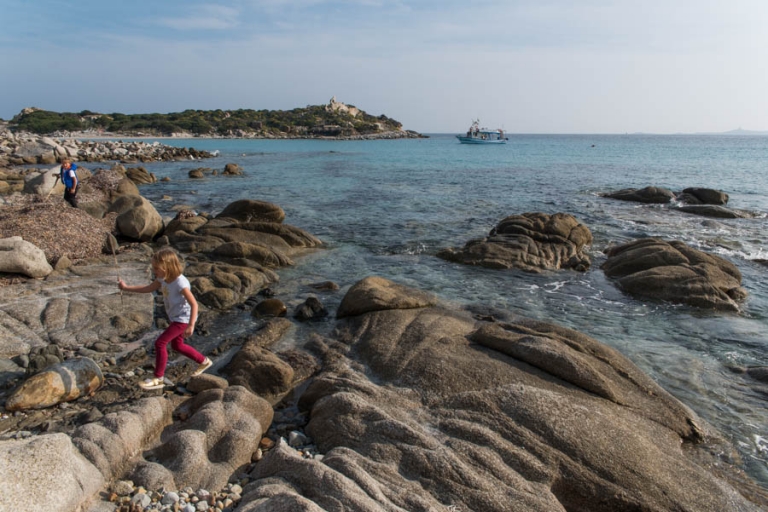 Jumping the rocks at punta molentis 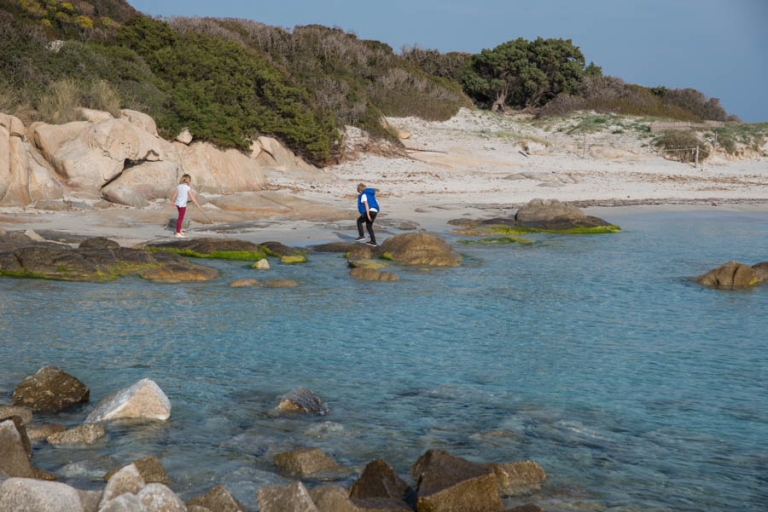 The rocks lead to an exquisite beach 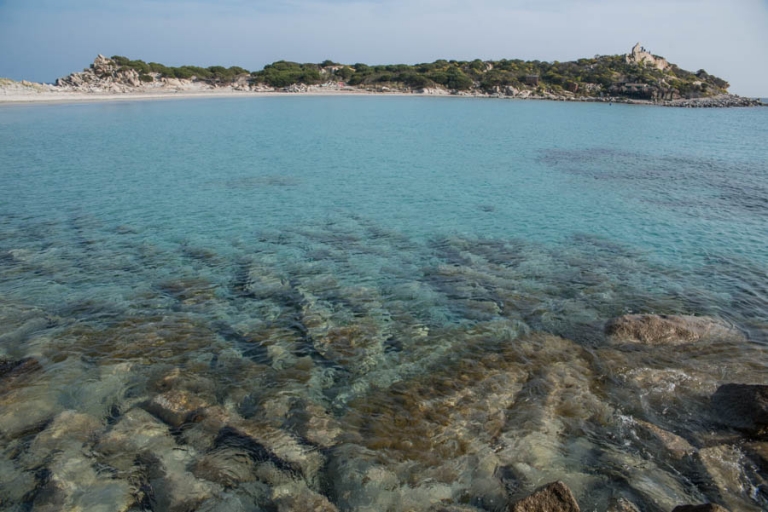 BOY, how did you get over there??

As we’re all stood on the beach admiring the view, we suddenly realise that the boy is half way into the sea and stood on a rock. I have no idea how he got there without us noticing lol.

I’ll say one thing for global education, it’s certainly making them more independent and more confident in their own abilities. 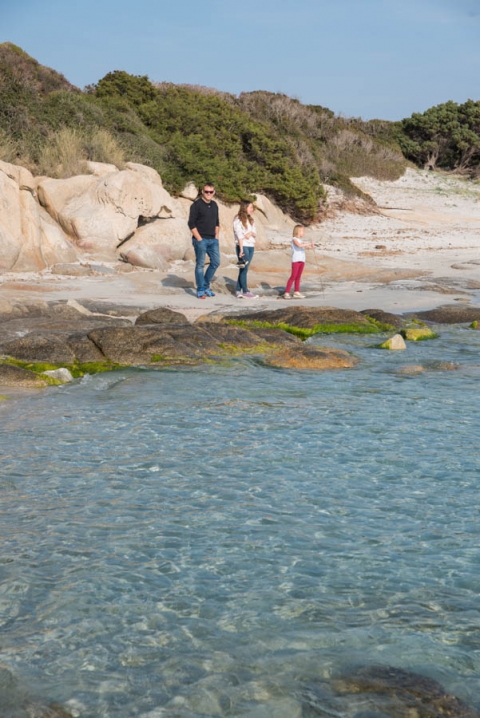 How did you get over there?

During summer months there’s a bar here but for now it is obsolete and having its winter makeover. Behind the bar sits the old mine and a pile of rocks which we think has been deliberately quarried to prevent beach erosion.  Rich and I decide to leave the kids on the beach (under the careful watch of our teenager – who was probably on her phone lol) and climb the rocks. 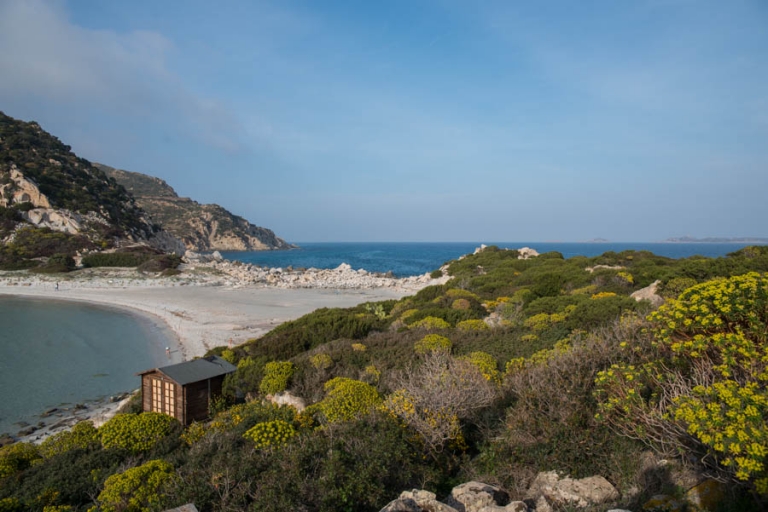 The view from half way up the hill overlooking punta molentis 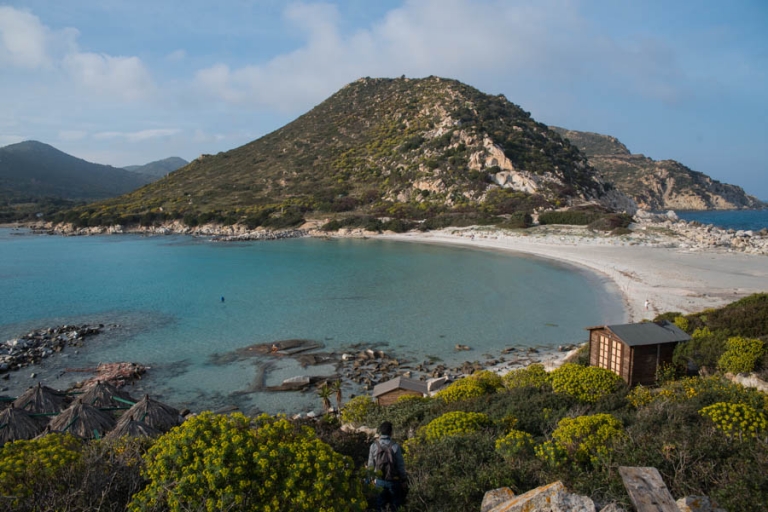 The view over the bay

The view from the top

We adore rock climbing so any opportunity to clamber around and we’re up for it!  I’m so glad we went up high because the view is spectacular. 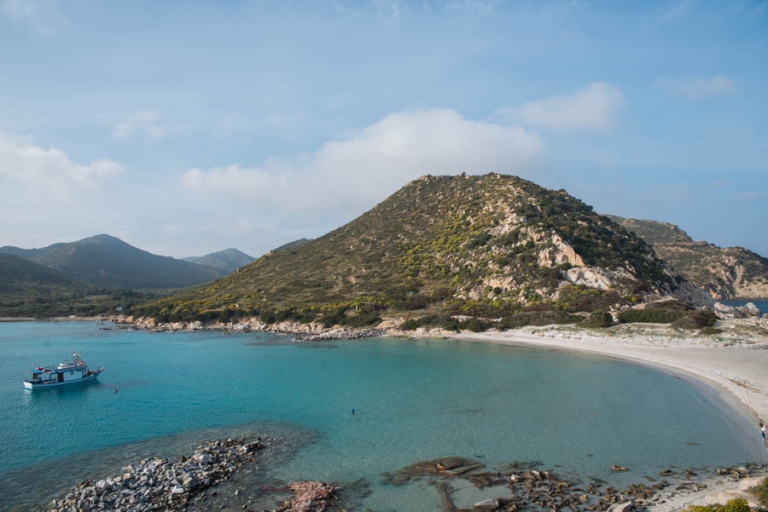 Look at that water 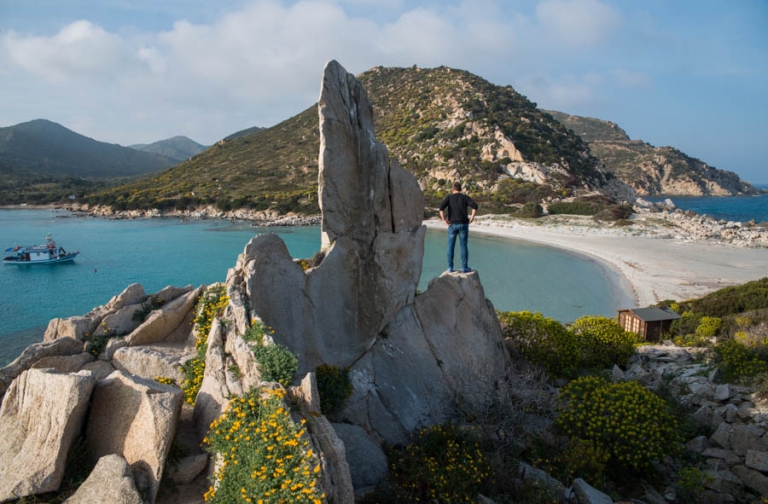 Rich admiring the view over the bay of punta molenits

The otherside of the peninsula (which is very almost an island) has previously been a quarry and there’s still evidence of this with fallen, linear rocks. In the summer the sea is calm enough for people to jump off the rocks and snorkel but for now we kept a retreat from the splashing! 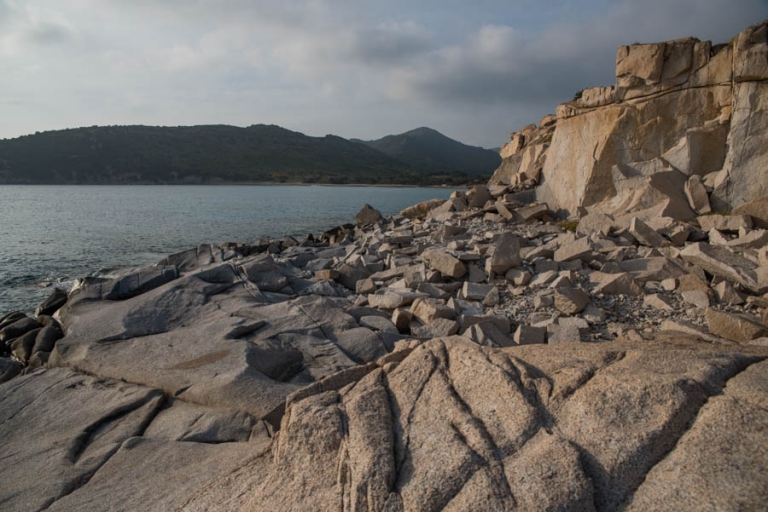 Rocks that have been mined 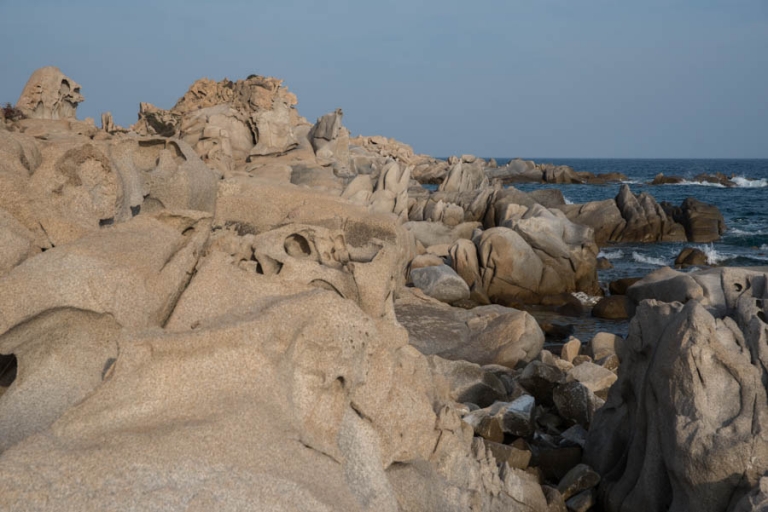 Rocks on the other side of the peninsula 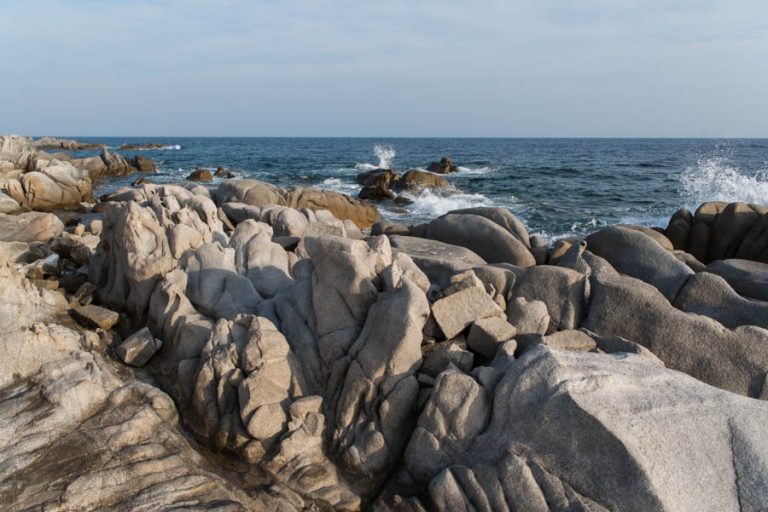 I just cannot get enough of the view, so maybe I’ll share just a few more photos… 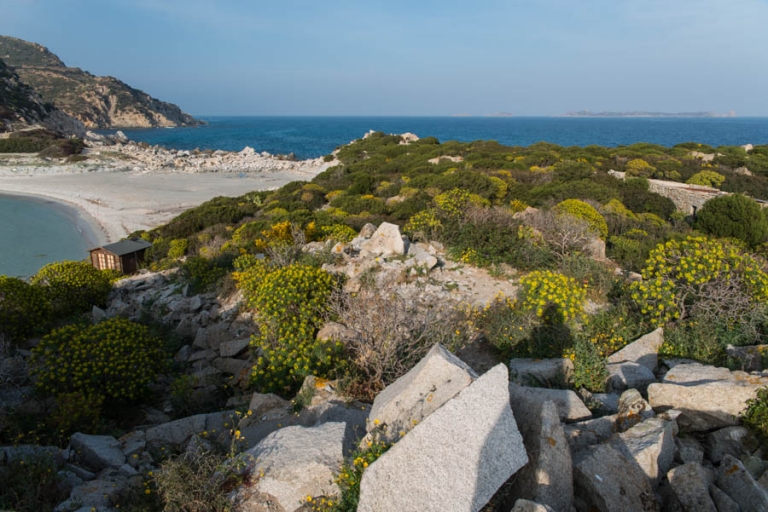 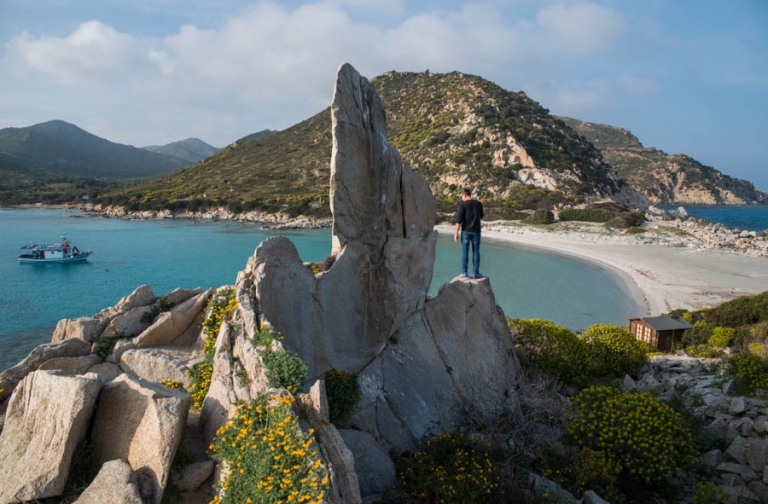 Rich on a rock 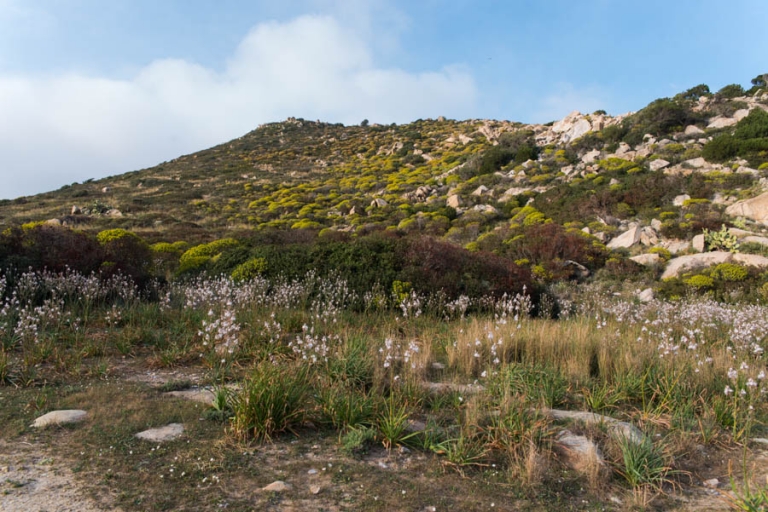 The flowering hills that surround the beach