Nora  is an ancient Roman and pre-Roman town which sits on the jutting peninsula of Pula in southern Sardinia.  The area was originally Phoenician; a flourishing sea route ran between Carthage and Sardinia. There were  two protected harbours on each side of the peninsula – part of each is still visible. 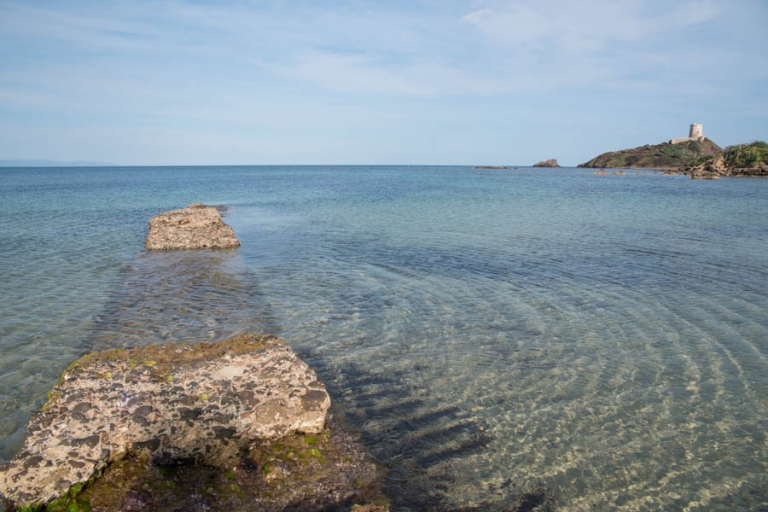 One of Nora’s Roman jetties overlooking the Spanish built tower. 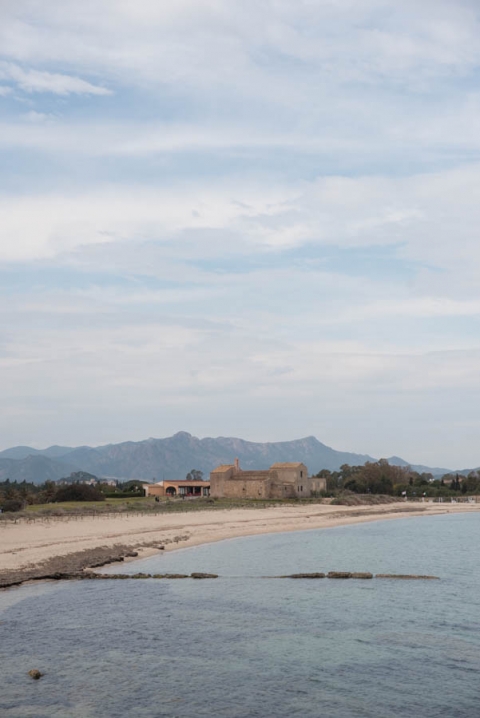 Roman church and jetty from Nora

Following the conquest of Sardinia in 238BC the town came under Roman control. It went into decline from the 4th century as after the Arab conquest of Carthage the city lost its economic function and it became a simple fort. Nora appears to have been abandoned during the 8th century.

Because the southern part of Sardinia is sinking into the Mediterranean Sea, a substantial part of the former town is now under water.  A similar fate has befallen nearby Bithia (under the tower of Chia), which is now completely submerged. 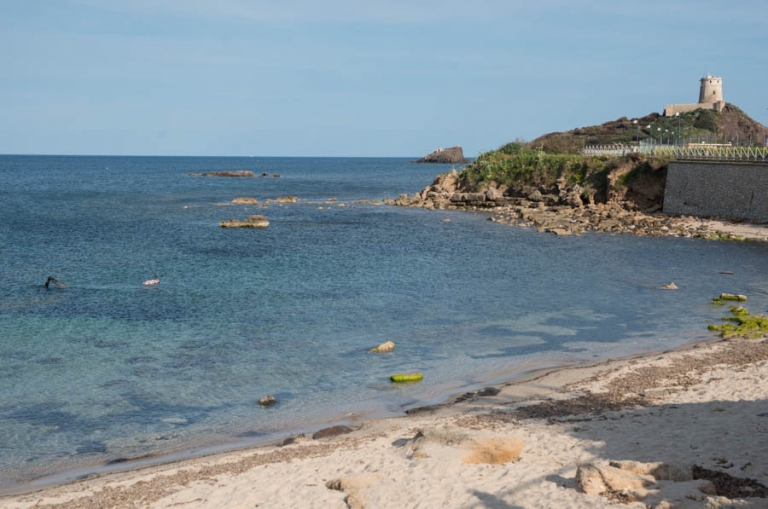 Roman rocks are visible in the shallow waters nearby

The excavated Roman town is large however a significant part of the town of Nora situated on land belonging to the Italian Army has not been excavated.

The entrance fee for one adult and three children was 21 euros. You cannot enter the Nora remains without a guide and so this fee includes that person and the hand held listening device you’re given if you’re foreign.  During off season the guides are held on the hour before 12pm and after 4pm. We weren’t aware of this so had to wait about forty minutes for a tour to start.

There are no maps or written guides and nothing for the children they could use as learning material. It would have been very helpful! 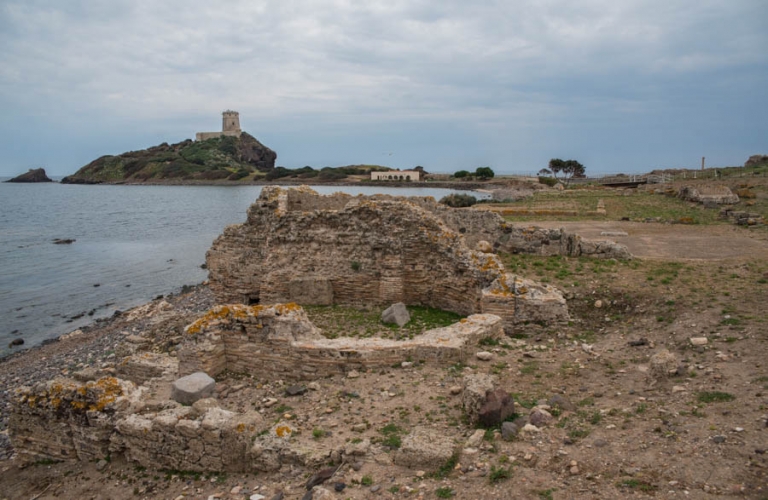 View over Nora from the entrance

Our guide was a relatively young female, I’ll guess under the age of 25 and I was really quite irate by her attitude towards us. Originally we were handed only one listening device. These devices are no bigger than a portable phone and produce a translated version of the tour the guide gives. As I was handed our audio device she said to me

This is only for adults not for children! 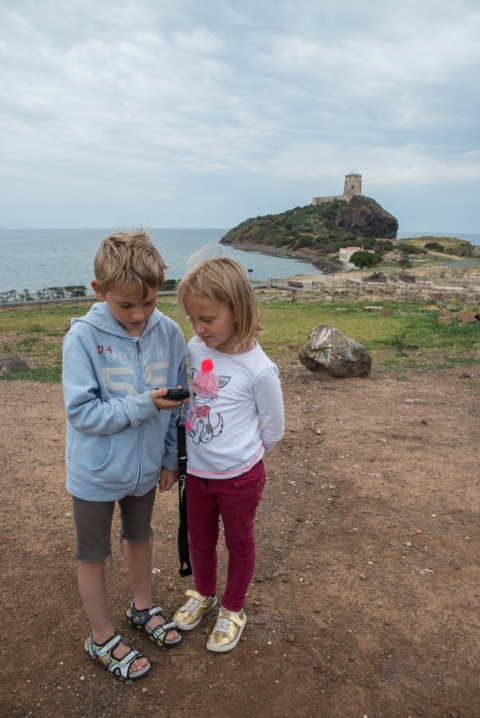 The kids listening to the audio device

Well this really pissed me off.  Without knowing my children, who are aged 8 and 7 and incredibly well behaved (that day), she had presumed they would damage the device – despite there being a neck strap on it too!!

We couldn’t hear anything on the device in loud-speak so were forced to listen to it individuallyand pass it around between us. It just wasn’t working for us so we asked for more devices for the children and reluctantly one extra was brought to us; but not similar to the one we were already using. This one was like some sort of Motorola phone from the 1990s – of course child proof!!

So between the four of us we had two listening devices. 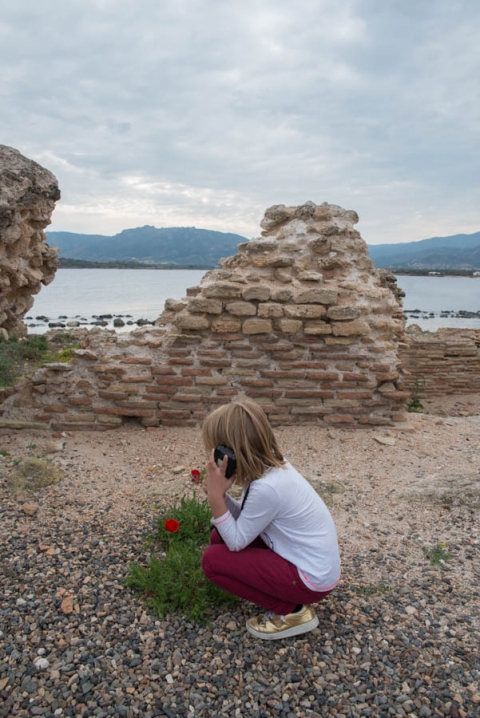 Imogen listening to her device 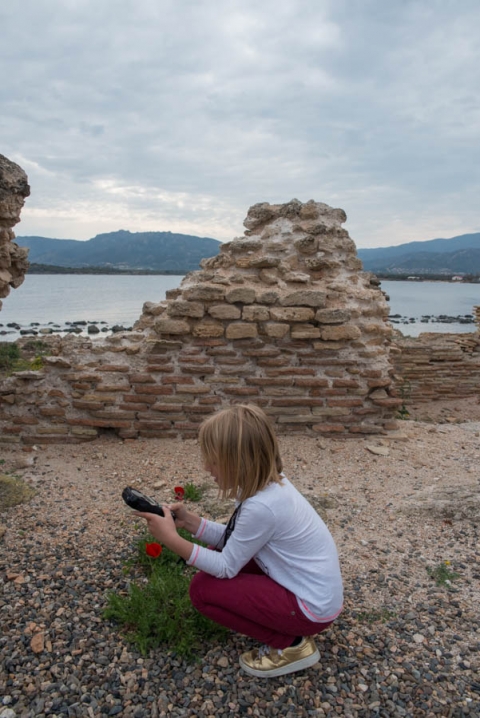 Trying to choose and listen to the device

This wasn’t the only occasion either where her attitude riled me. Later on she insinuated that the children shouldn’t even be on the tour because they weren’t learning about the Romans in history!! She proceeded to tell me that Italian children only learn about the Romans in their last year of primary school and that they really wouldn’t learn anything.

One thing that really gets my goat is the presumption that children can only learn in a classroom and that they should be limited to learning at age specific times. Utter crap! 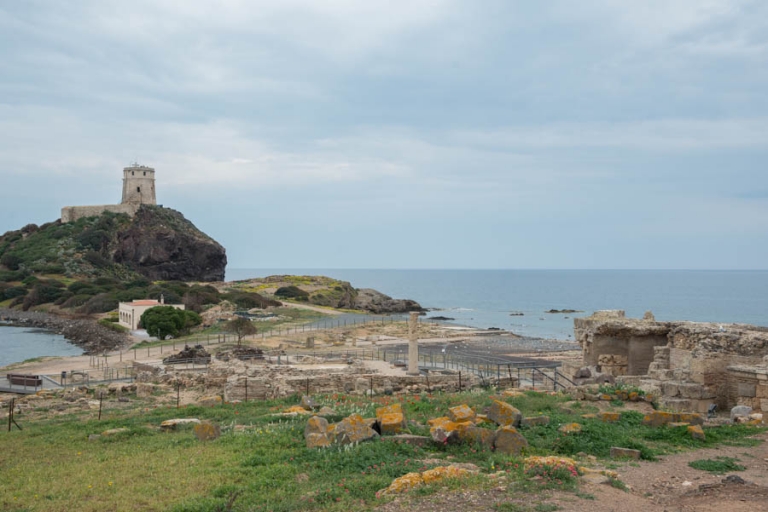 The tour was started in Italian with us trailing along behind at the back of the group. We felt ignored and cast aside really.  We actually missed the second and third stop on the listening device because we weren’t aware of where we were. We weren’t the only ones though as I could hear a French couple with us complaining they didn’t know what stop they were either.  Eventually Imogen (aged 7) went and asked in her best Italian

For Italian speakers, you’ll realise this is full of mistakes BUT she’s 7 and I’m not going to correct her.  So courtesy of Imogen we realised we’d stopped at the Temple for number one but then had missed numbers two and three and re-connected at number four. So we quickly hop footed back a few steps. 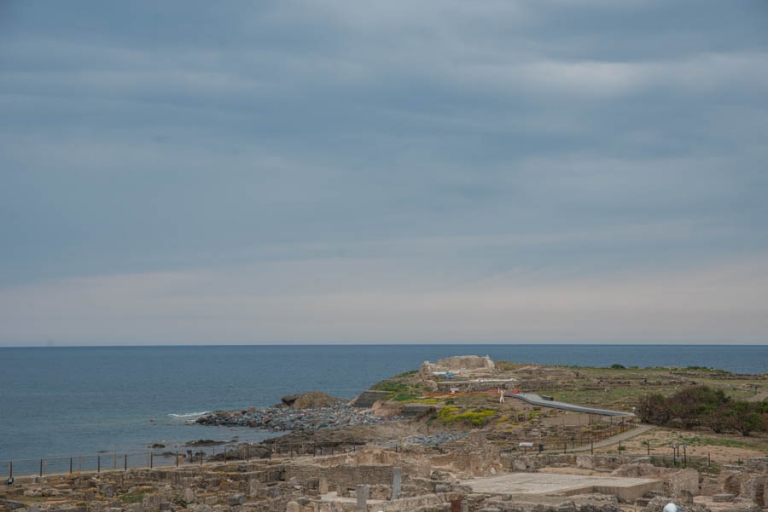 The temple is now an indistinguishable & collapsed pile of rocks. It is mostly frequented by nesting seagulls. This is the best photo I got of it. 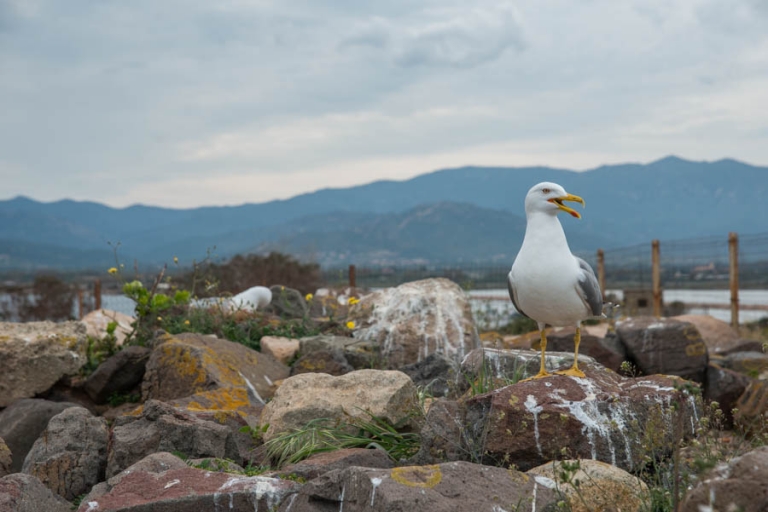 I didn’t photograph what number two was so I have deduced it was either an atrium or a triclinium.

The room was a U shaped room and had some sort of water collection facility in it. This makes me think it was probably an Atrium however I have included the description for both.

The atrium was a central hall and it was the most conspicuous room in a Roman domus. It was open at the roof, which let in light and air for circulation, and also allowed rainwater for drinking and washing to collect in the impluvium, a small draining pool in the middle of the atrium. Cisterns were also located throughout the domus to collect rainwater, which acted as the primary water supply in the absence of running water.

The atrium was one of the most richly decorated rooms in the domus.

The Triclinium (dining room) was a “three couch room” because it had three couches arranged in a U-shape. While eating, Romans reclined on these couches and they always dined barefoot. There were no fixed tables in the Roman triclinium; food was served on portable tables, sometimes by a high-ranking slave. 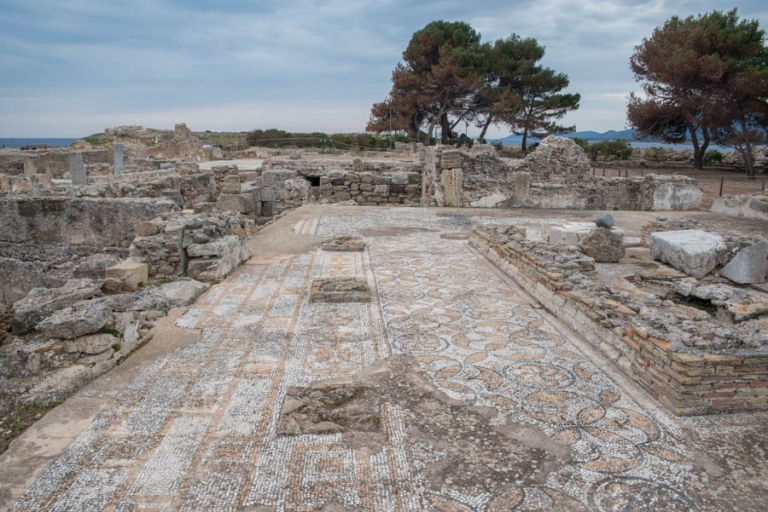 What we think was the tiled floor of the Atrium

There were a number of housing districts around the site. This one in the centre of the city and another one next to the sea front. 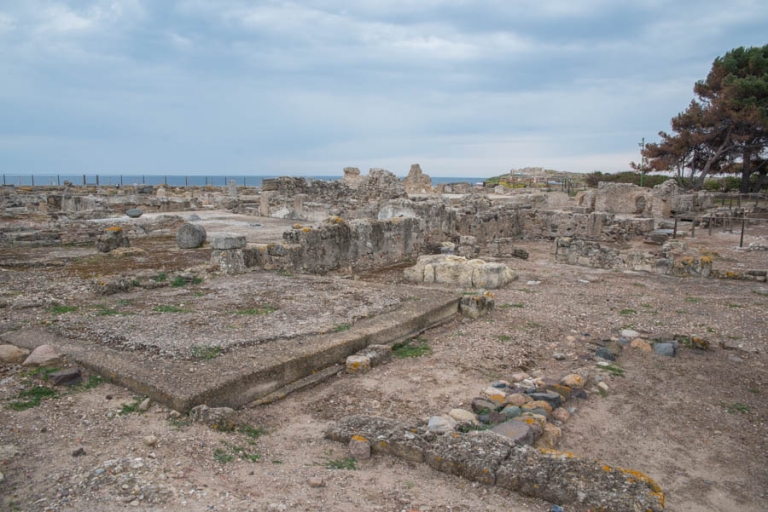 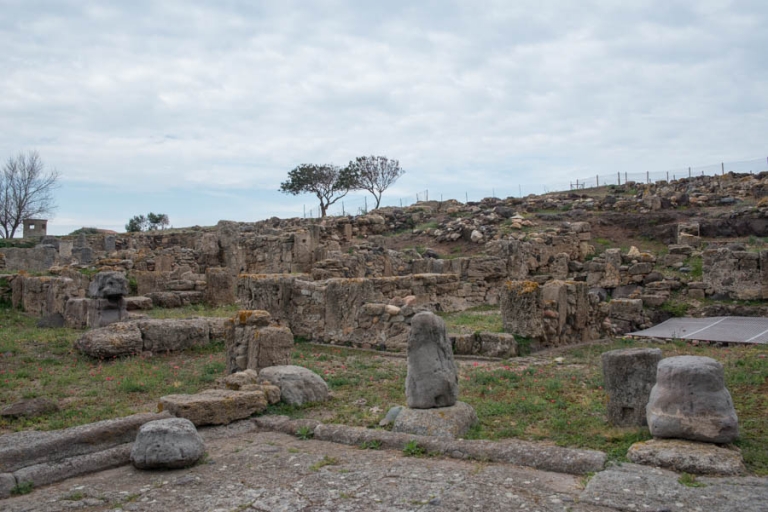 Housing district in the centre of the city 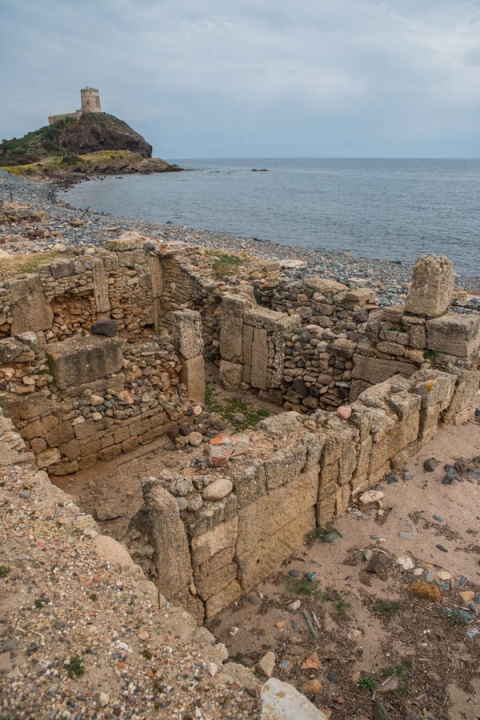 The housing district near the sea

This is the longest road within the Nora remains. Sadly we didn’t get the chance to walk on it but we passed by the cross roads near it. Instead our guide whisked us off to the north eastern coast where the Artrium pillars stand. 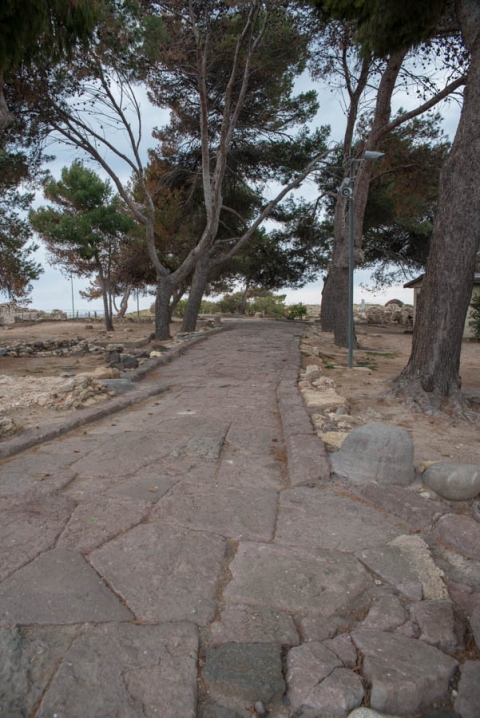 The longest road in Nora

Perhaps the greatest thing about the actual tour is the tetra-style Atrium house and the four pillars that remain. I really wanted to get a photo of the pillars in the sunset but alas as it was a formally guided tour and we weren’t allowed anywhere by ourselves, I was unable to. 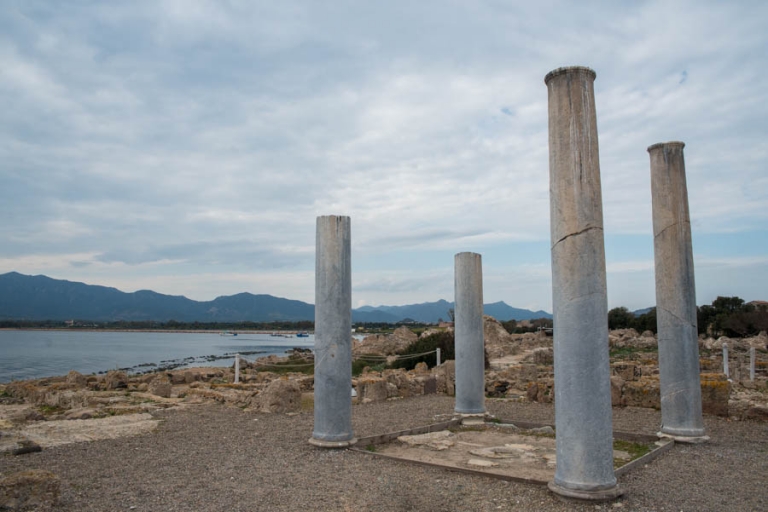 The pillars from the tetra-style atrium 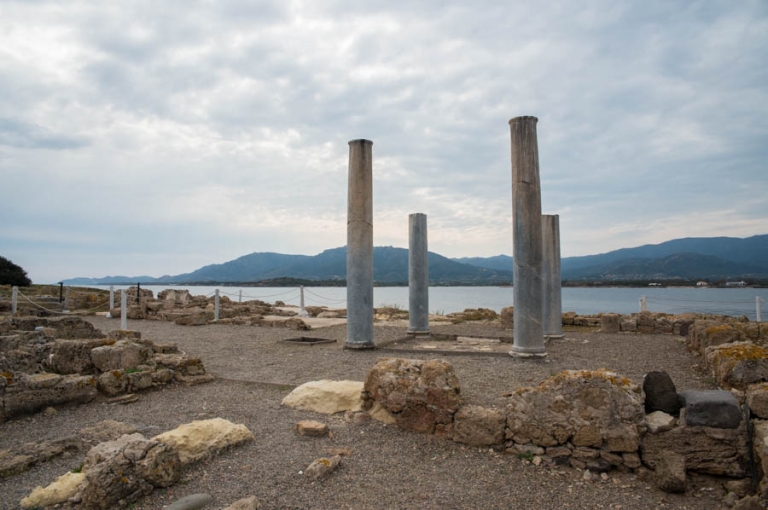 The pillars from the tetra-style atrium

The remains are generally in quite a good condition but the condition of the theatre is great. The stage area and the archways I suspect have been repaired but for over a thousand years old they’re looking good! 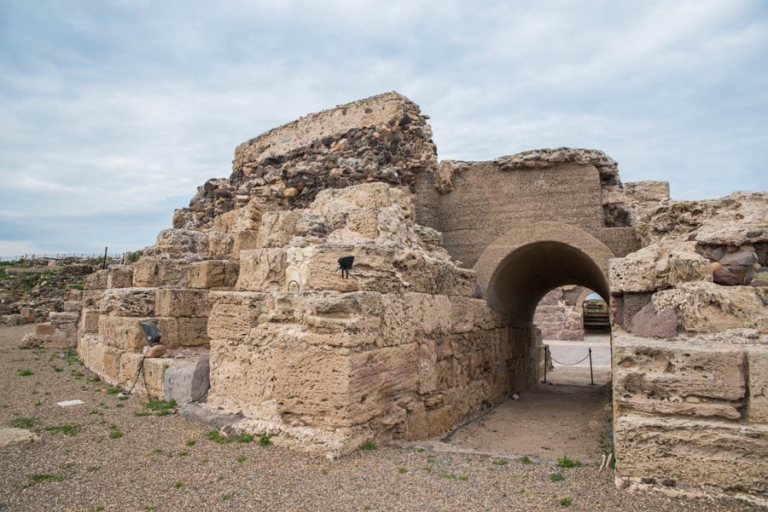 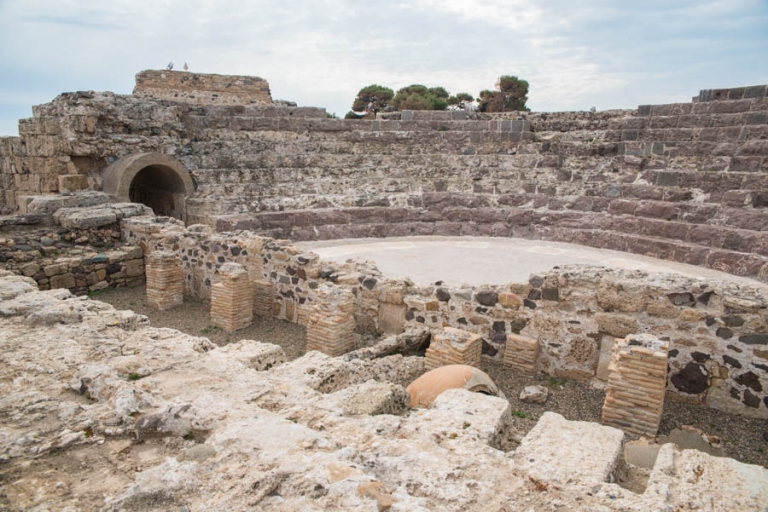 I have no idea what anything is from here on as it was so difficult to listen to the hearing device, retain information and keep up with the tour.  Some reading material would be fantastic. Maybe I should have asked for some? 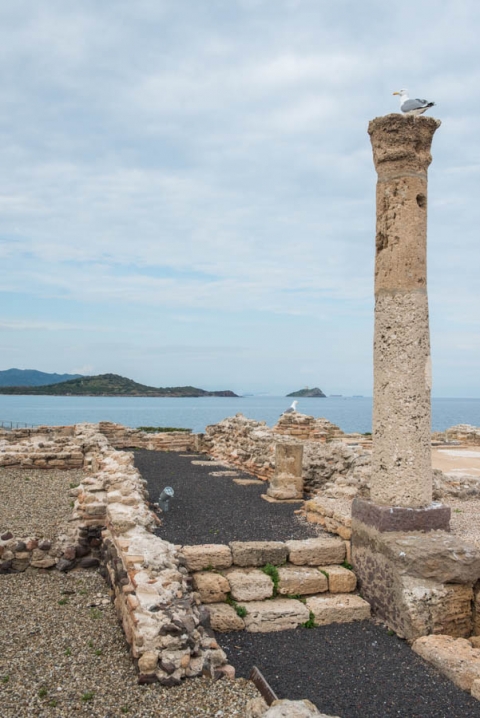 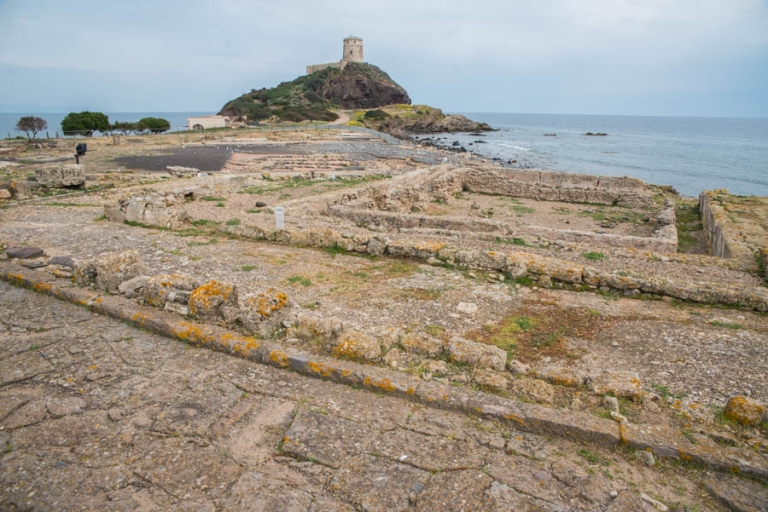 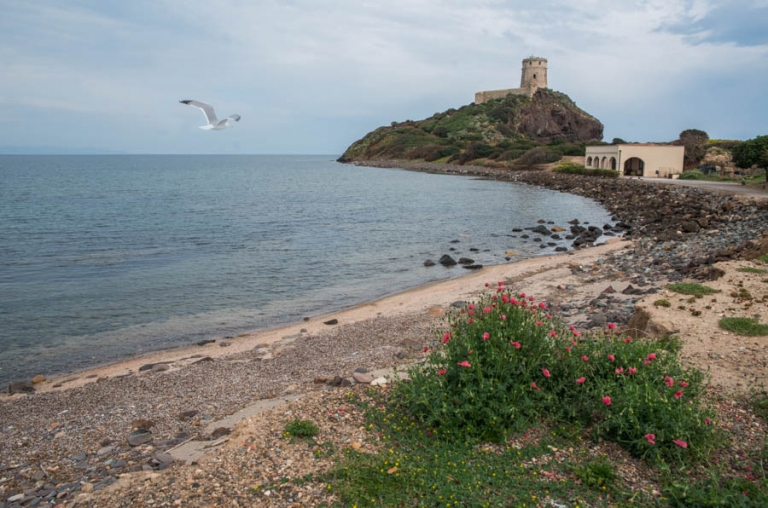 The roman remains are really good and there’s a huge amount to see (if you’re allowed to) but the best part of the tour was being allowed to visit the Spanish tower. The view over the bay is magnificent and gives  a birds eye view of just how grand the remains are.

Visiting the tower adds forty-five minutes on to the tour which takes approximately an hour. 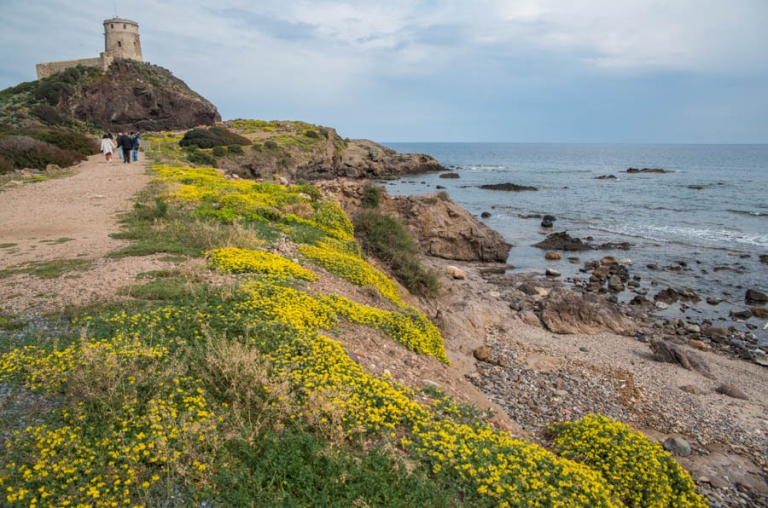 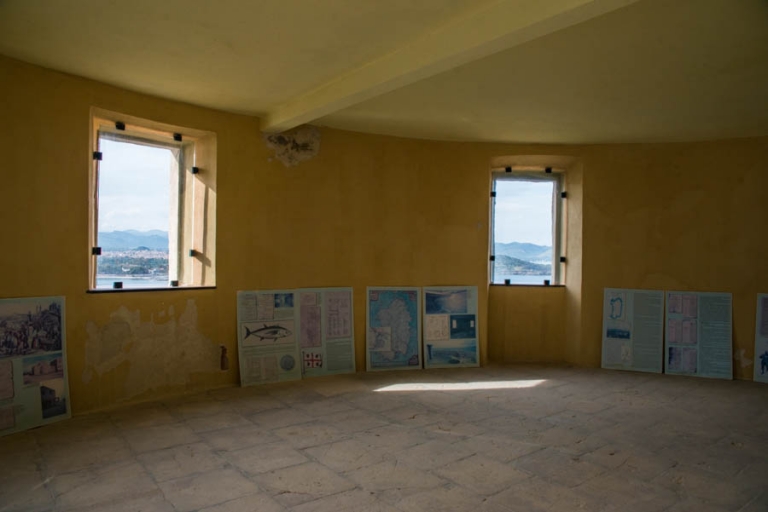 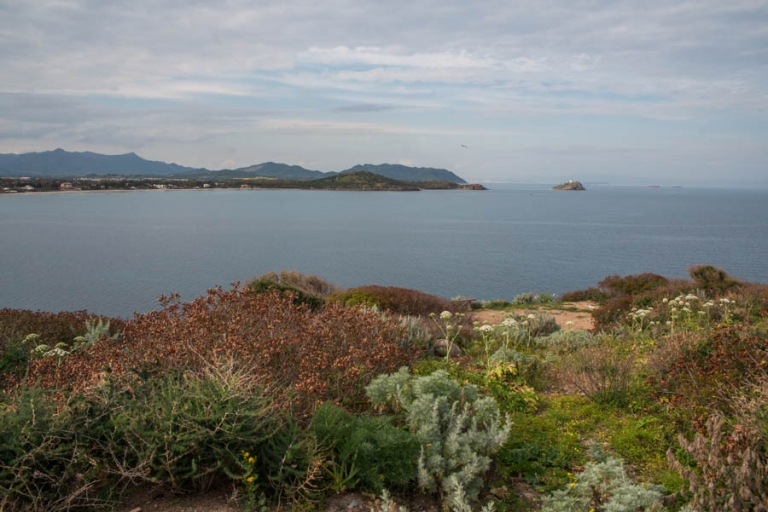 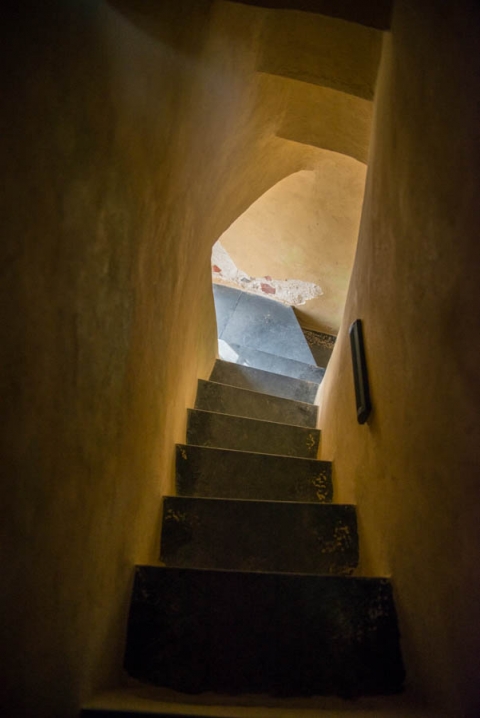 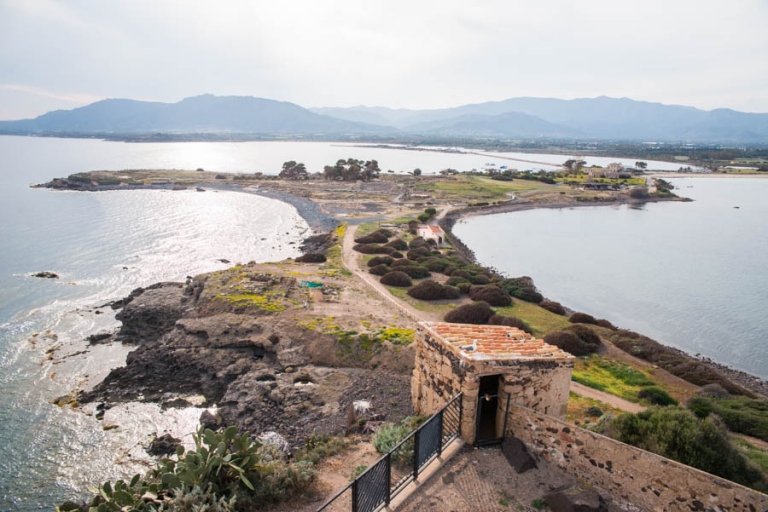 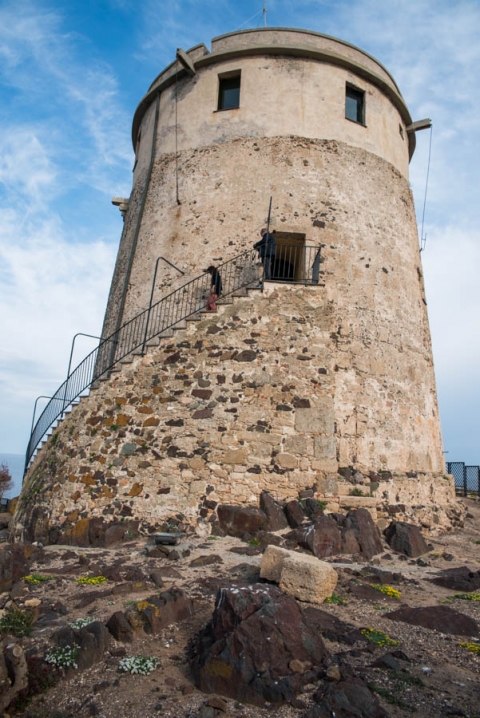