Veliko Tarnovo is a small town that has a rich and brutal history. Once upon a time it was the capital of the Second Bulgarian Empire but now this city is a popular destination for travellers as they make their way from one end of the country to the other, and we were no exception.

The kids and I had left Richard at Varna airport in the south and were making our way across to Sofia when we decided to spend a few days in this quaint (and very wet) city which is often referred to as Bulgaria’s best kept secret. 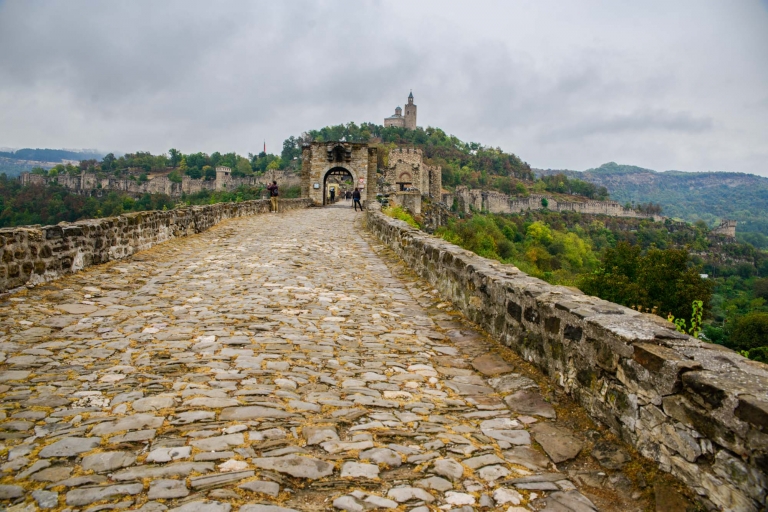 We had been enjoying Bulgaria’s last rays of sunshine on the Black Coast – pretty good for October – but then autumn really started to show its face. The clouds were rolling in, the rain fell out of the sky and the temperature dropped. It was definitely time to head over to Spain and enjoy some proper sunshine.

Our flights from Sofia (Bulgaria’s capital) were booked and as we were heading to Sofia it seemed silly not to spend some time there too but first we had to drive.

To break up the six hour journey we decided to spend a night in Veliko Tarnovo which was about half way. The kids and I packed up the car and after a leisurely breakfast we headed off. 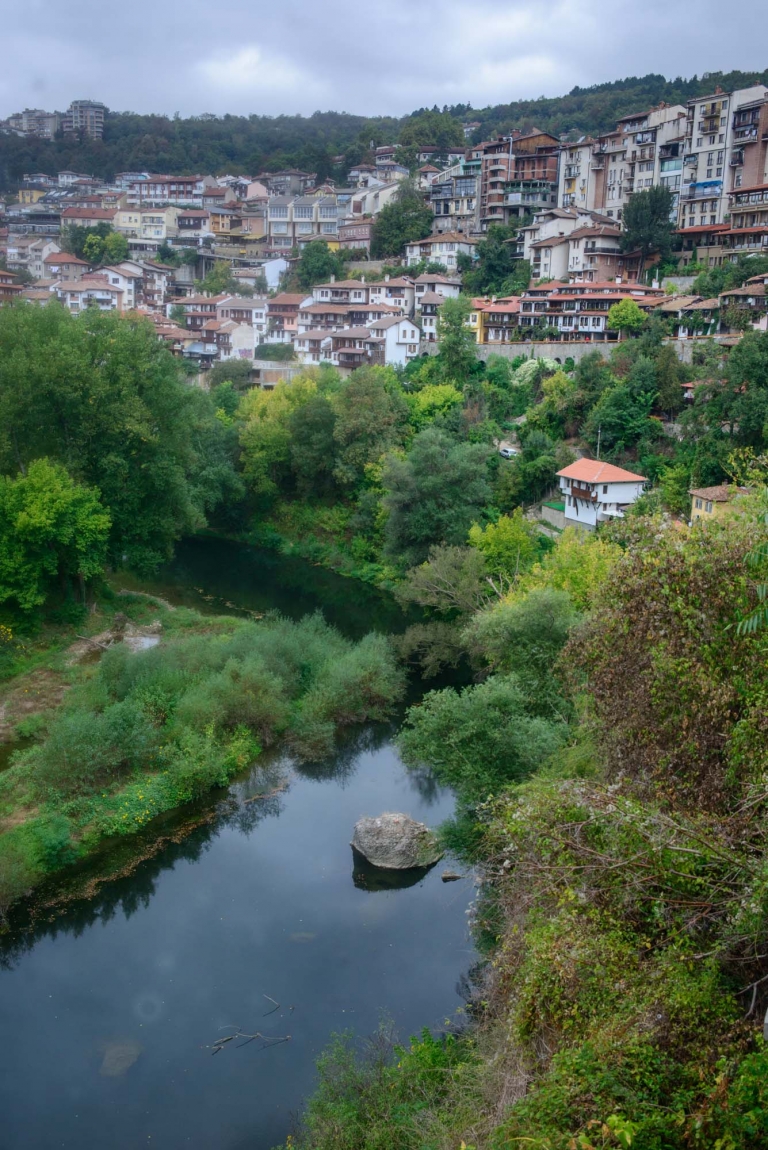 Bulgaria’s roads are a bit hit and miss. Sometimes you can be driving down the nicest, best paved road you’ve ever come across but other times the roads are full of pot holes, cracked bitumen and lumps and weird bumps.

For this reason the speed limit in Bulgaria is quite low and it can take a while to get anywhere. Many of the roads are reduced to single carriageway and it was along a stretch of such road that I hit a dog. I was lucky not to hit the other two it was running with.

I was devastated, there was no way to avoid it, and it seemed to bounce off the car unperturbed and carried on running down the narrow stretch of hard shoulder.

In a a bizarre set of events, there also seemed to be an old man shouting at me to ignore the dog and drive away. My Bulgarian is not the best but I’m pretty sure that’s what he was saying. It was all very confusing so we did what any self-respecting family would do and stopped at Lidl’s for lunch! 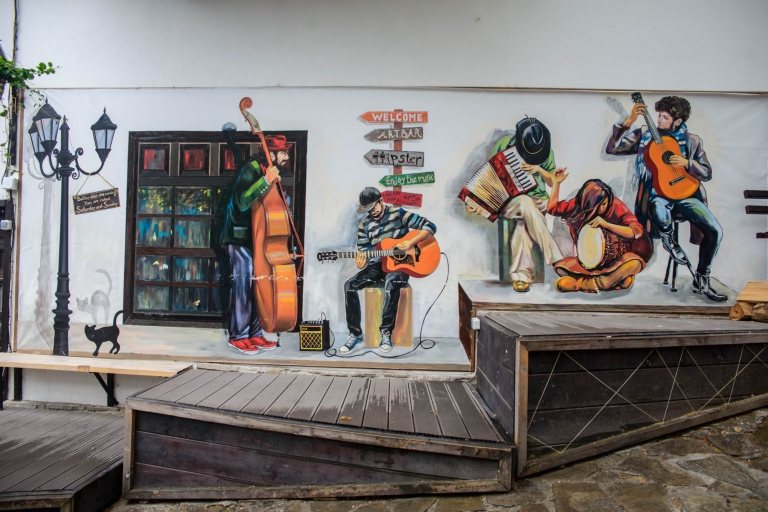 Vegan food on the go

Lidl’s in Bulgaria is some of the best fresh food (out of a supermarket) that I’ve ever had and there was also a great selection of vegan fast food; dips/bars/biscuits/veggie crisps etc.

Our go to on the road for a quick pit stop is veggie sandwiches. A quick re-fill and we were good to go back onto Veliko Tarnovo. 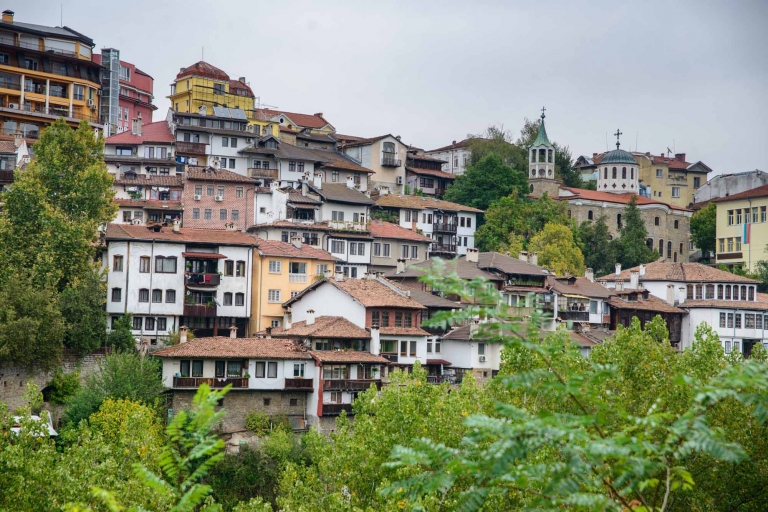 One of the oldest cities in Bulgaria

One of the oldest cities in Bulgaria, Veliko Tarnovo is steeped in five thousand years of history.

The city is divided into new and old sections but in some way still retains  its authenticity and beauty.

The old town maintains itself as a small, picturesque city with steep, narrow and twisted cobblestone roads. Great for aesthetic purposes but not so great for driving around! The new town is a mini-concrete jungle with wide roads, traffic lights and plenty of traffic. 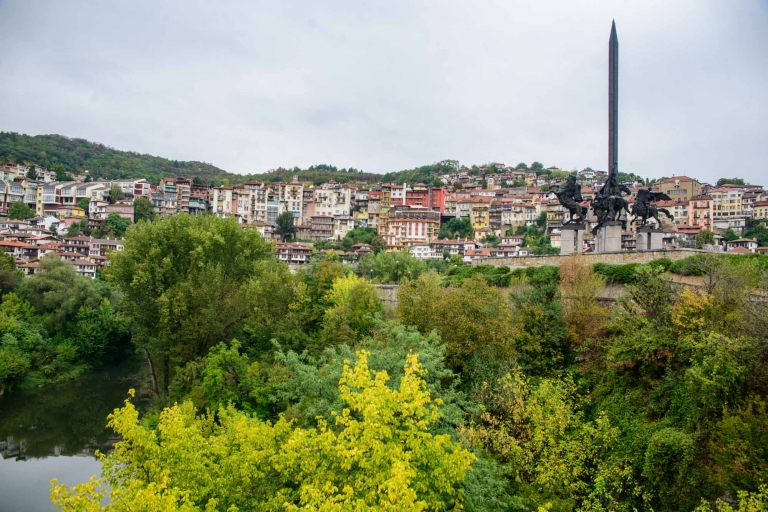 Veliko Tarnovo was built on three hills: Tsaravets, Trapezitsa, and Sveta Gora with the Yantra River running through it.

It is fairly easy to get around Veliko Tarnovo; almost everything is in walking distance or a short taxi or bus away. The best way to understand the bus system is to pop into the Tourist Info store and ask them.

Archaeological evidence suggests that people occupied this area from the third millennium B.C. The city was declared capital of the Second Bulgarian Empire in 1185 after two local aristocratic brothers, Ivan Assen and Theodor-Petar, led a two-year battle against the Byzantine Empire.

At that time, the city was known as Turnovgrad which developed at a fast pace with significant structures being built between the 12th through 14th centuries. Among these is the Tsaravets Fortress however during this period of prosperity over 30 monasteries sprung up on Sveta Gora Hill.

Along with the rest of the Balkans, Turnovgrad eventually fell into the hands of the Ottoman Turks in 1393, where it remained for nearly 500 years. Bulgaria was finally liberated in 1877 and Veliko Tarnovo became the capital city of the newly formed independent state. 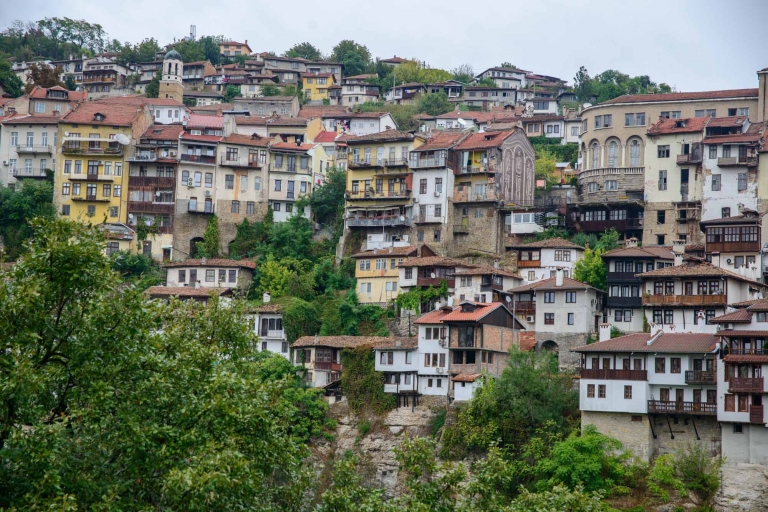 The tourist map from the information centre says there are over twenty five separate places to see in Veliko Tarnovo. There’s no way we wanted to see all of those, so we picked the most important.

It is definitely worth popping up to the tourist centre and getting a map. I found that google maps missed British spelling of interesting places and Bulgarian letters confused me… 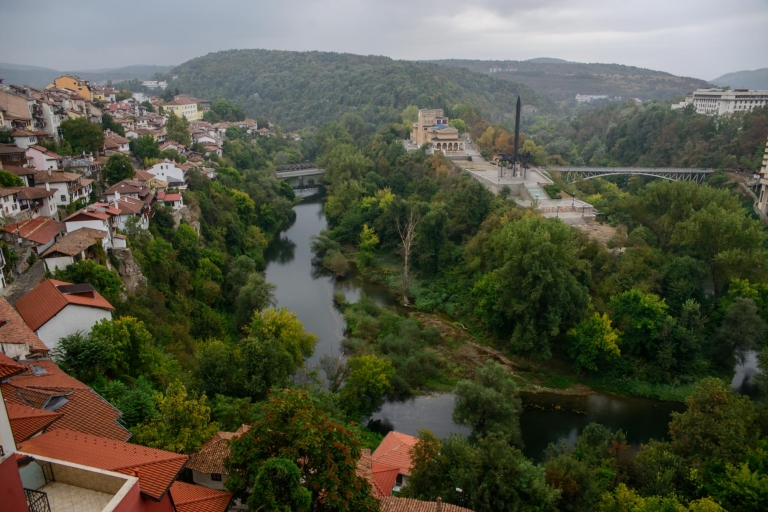 The Mother Bulgaria monument stands in the center in the new town. The monument was officially opened on May 6, 1935 and is dedicated to the Bulgarians killed in the four wars – Russian-Turkish, Serbo-Bulgarian, First Balkan and First World War.

Notice the big puddles? There was constant rain throughout our visit which was great for the kids who get drenched splashing around. 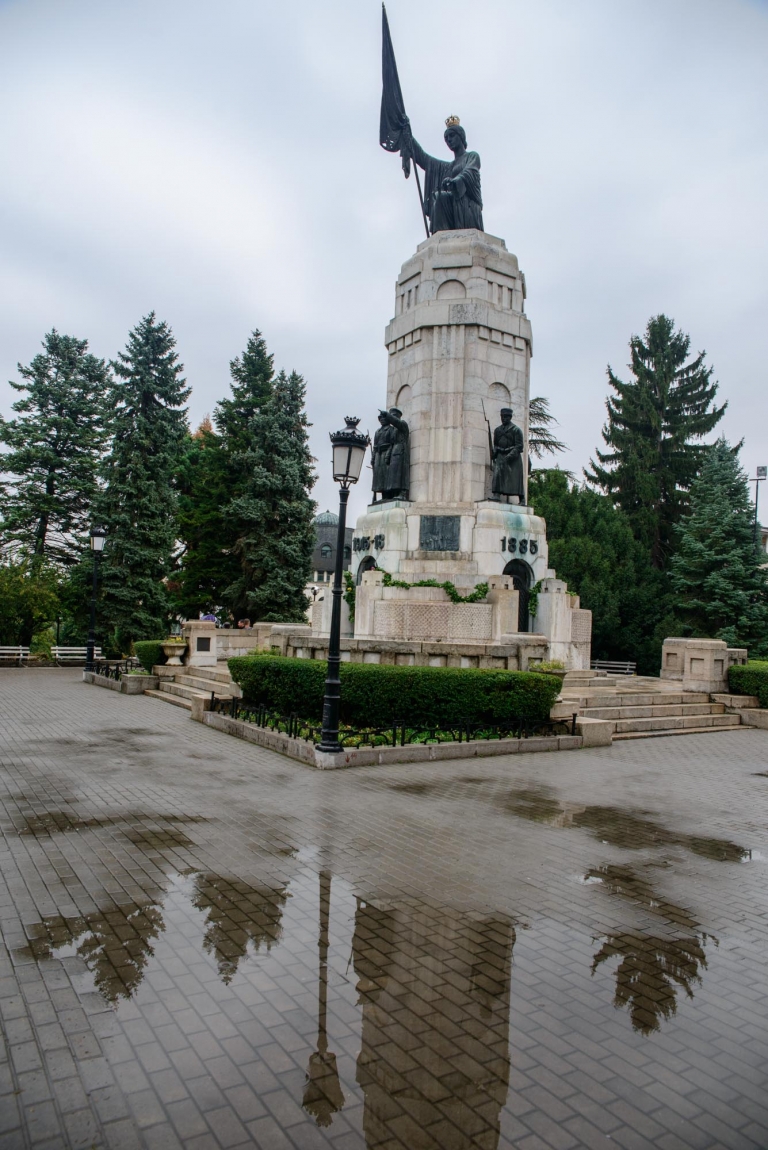 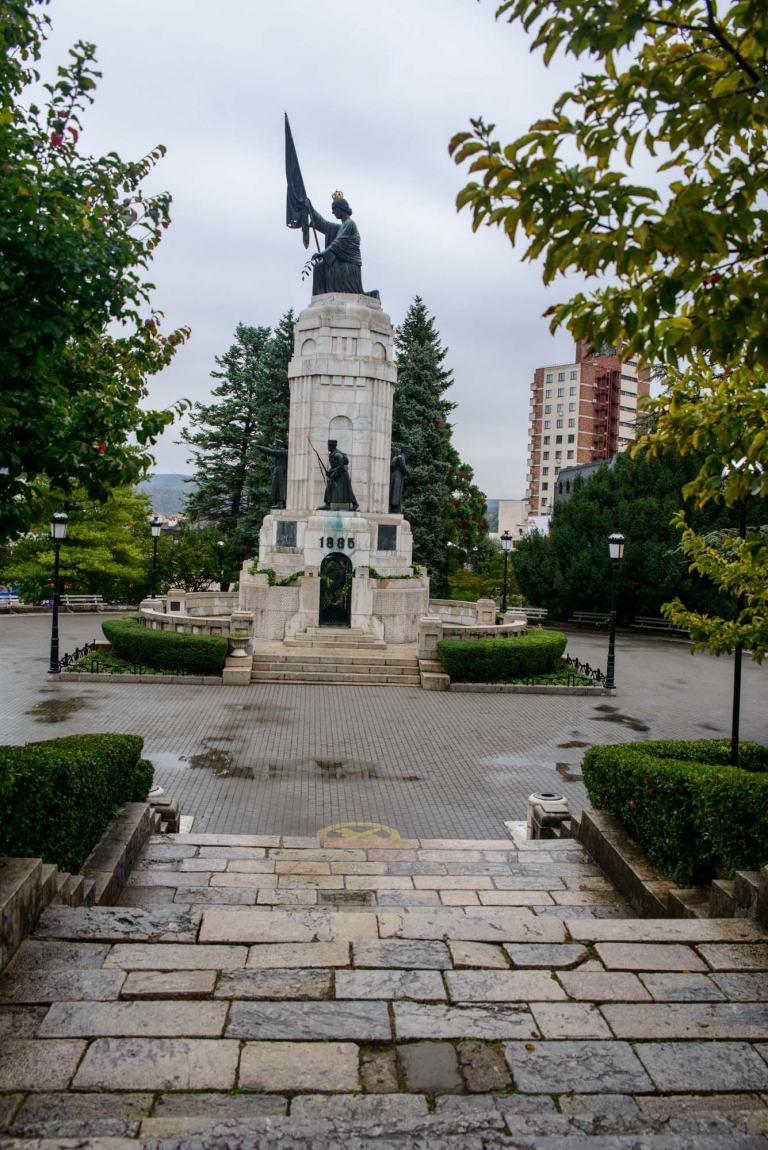 The river Yantra meanders through the steep-sided banks of the city separating the old and new.

Stambolov bridge connects the new town and Sveta Gora and is named after the prominent Bulgarian statesman Stefan Stambolov, who initiated its construction.

The bridge leads to the river-peninsula Boruna, where the monument of the Assens and the decorated Boris Denev Art Gallery are.

Currently the bridge is completely pedestrianised and there even a few (deliberate) holes in the bridge so you can look down and see the valley below. It’s a brilliant place to teach kids about distance and sound. We dropped sticks off the bridge and listened to see if we could tell how far up we were. 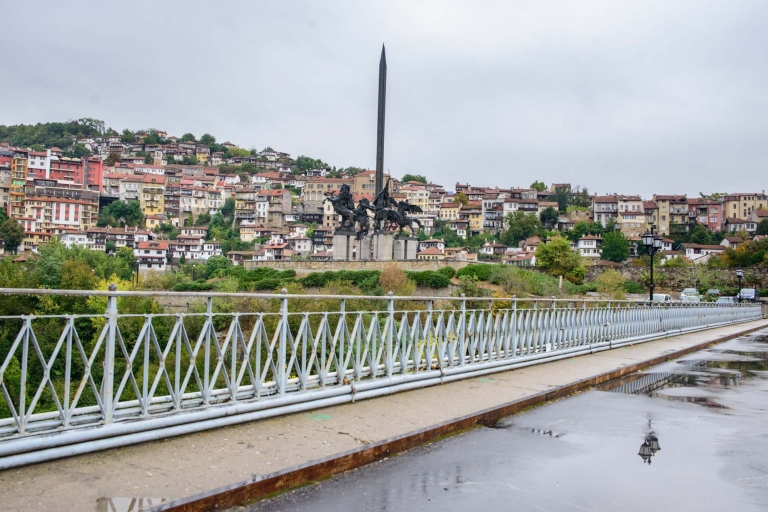 The Assens Monument can be seen from almost everywhere in the city. Nicknamed the “horsemen statue,” it features the Bulgarian Tsars: Ivan Assen, Theodor-Petar, Kaloyan, and Assen.

The statue, which was erected exactly 800 years after the city was appointed capital of the Second Bulgarian Empire, commemorates the tsars for their contributions to the city.

The kids didn’t really care about how old it was, they just wanted to see how many of the steps they could jump down at one time! A great jumping opportunity for those not so interested in history. 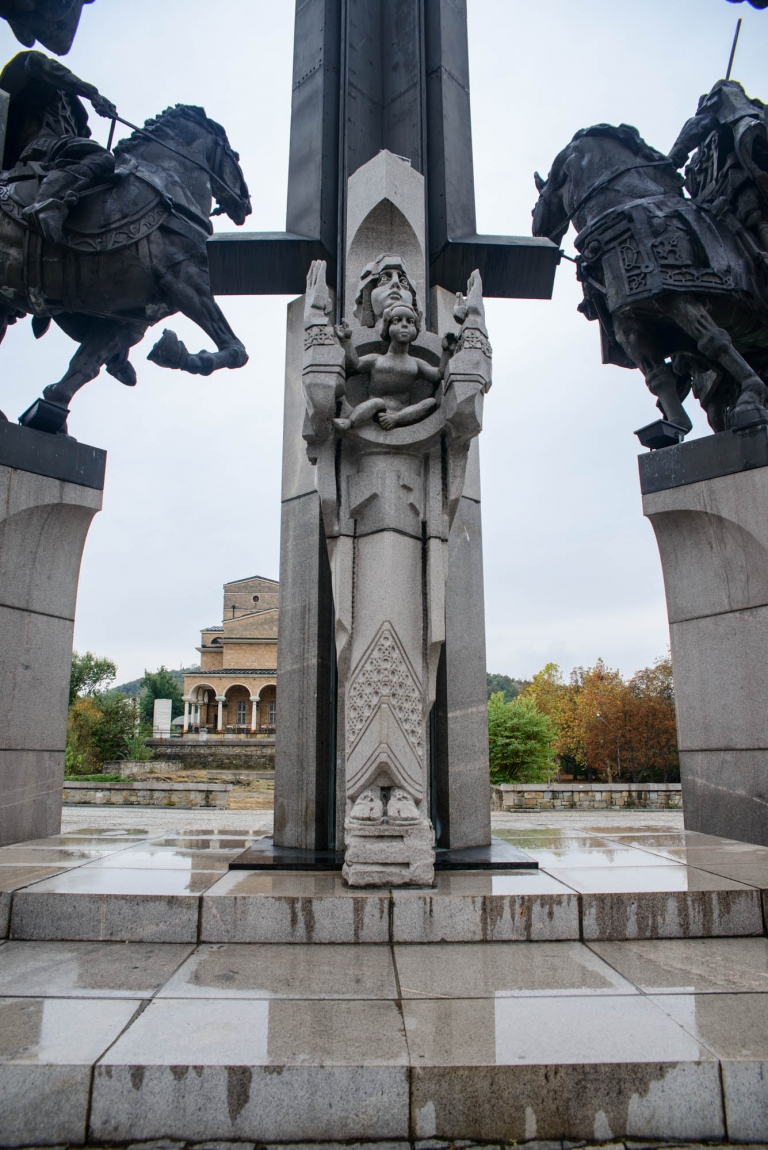 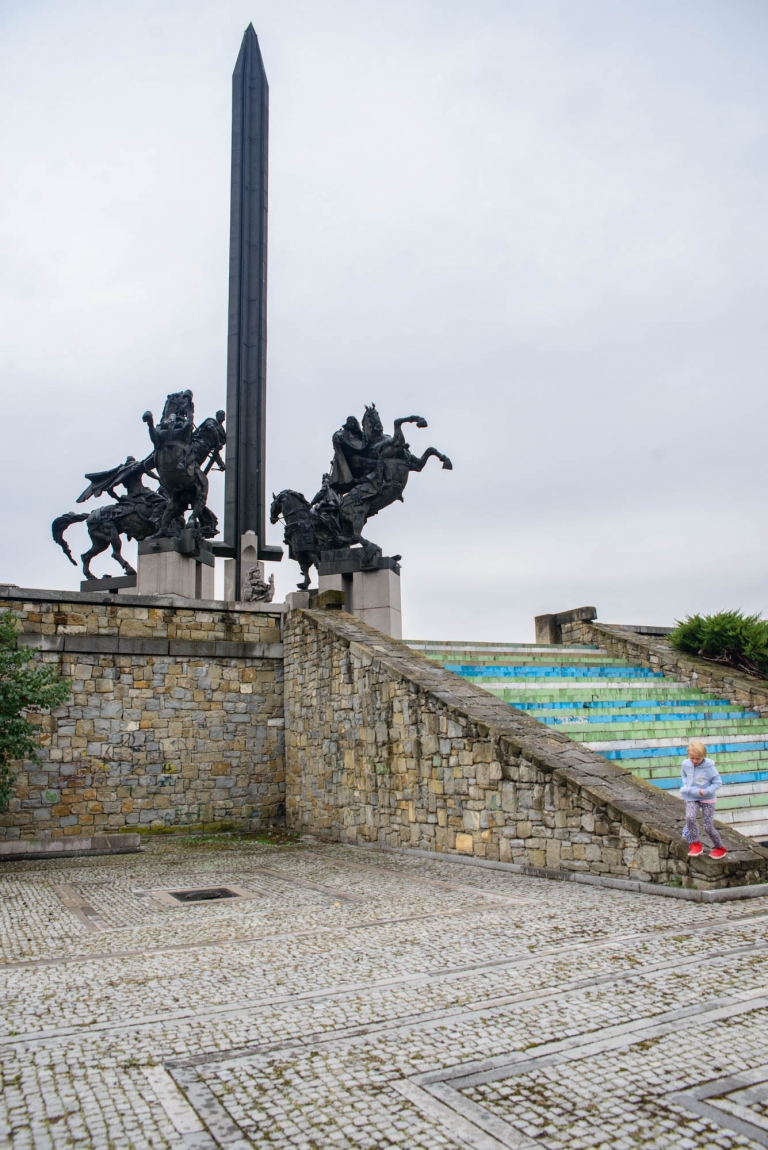 Just before you enter the old town is a small, triangular memorial. Walk too quickly and you’ll miss it.

In this place, during the Ottoman rule a gallows arose. During this time the Turks killed anyone who tried to liberate Bulgaria from their control.

The memorial therefore has historical significance for the city and national liberation. 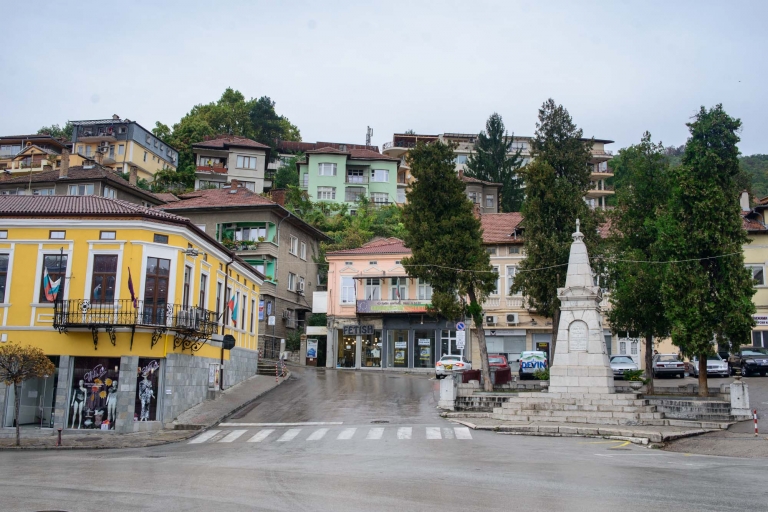 Tucked out of site from the main road and round the back of a tattoo parlour is a look out point.  It gives a brilliant view across the valley to Sveta Gora.

We watched the clouds breezing past and admired the autumnal colours of the trees before heading into the old town. 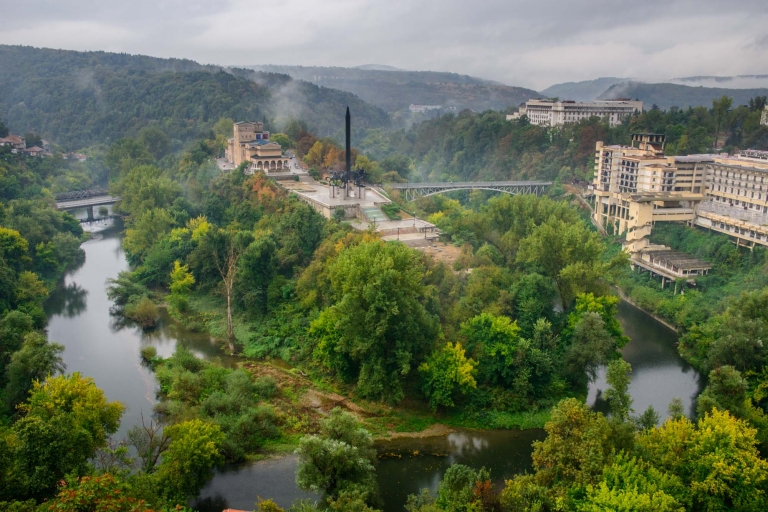 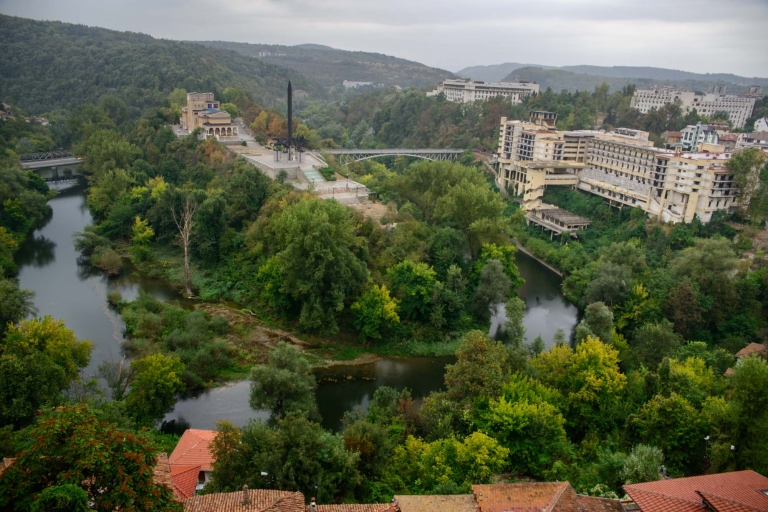 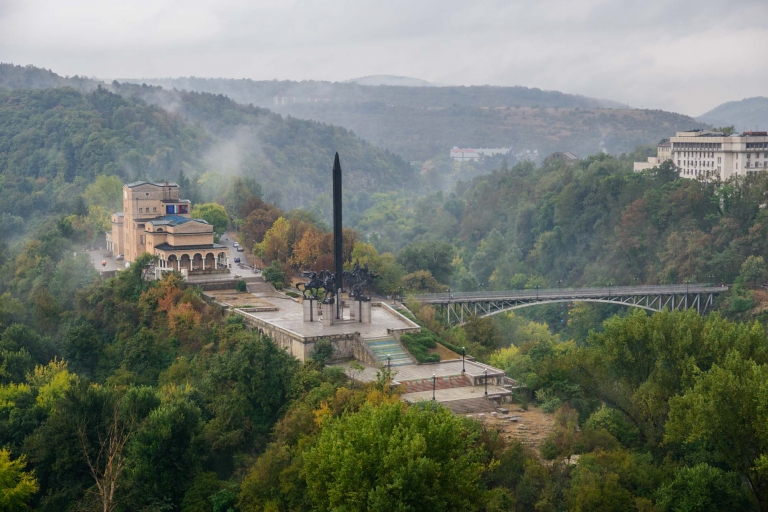 One of the oldest buildings in Veliko Tarnovo

It isn’t much to look at granted but this is the oldest building in Veliko Tarnovo.

The majority of the houses in this part of the city were built in the 1880s when National Revival architecture was at its best.

We found many cats in this area all who obliged with rolling around the kids feet and randomly following us. 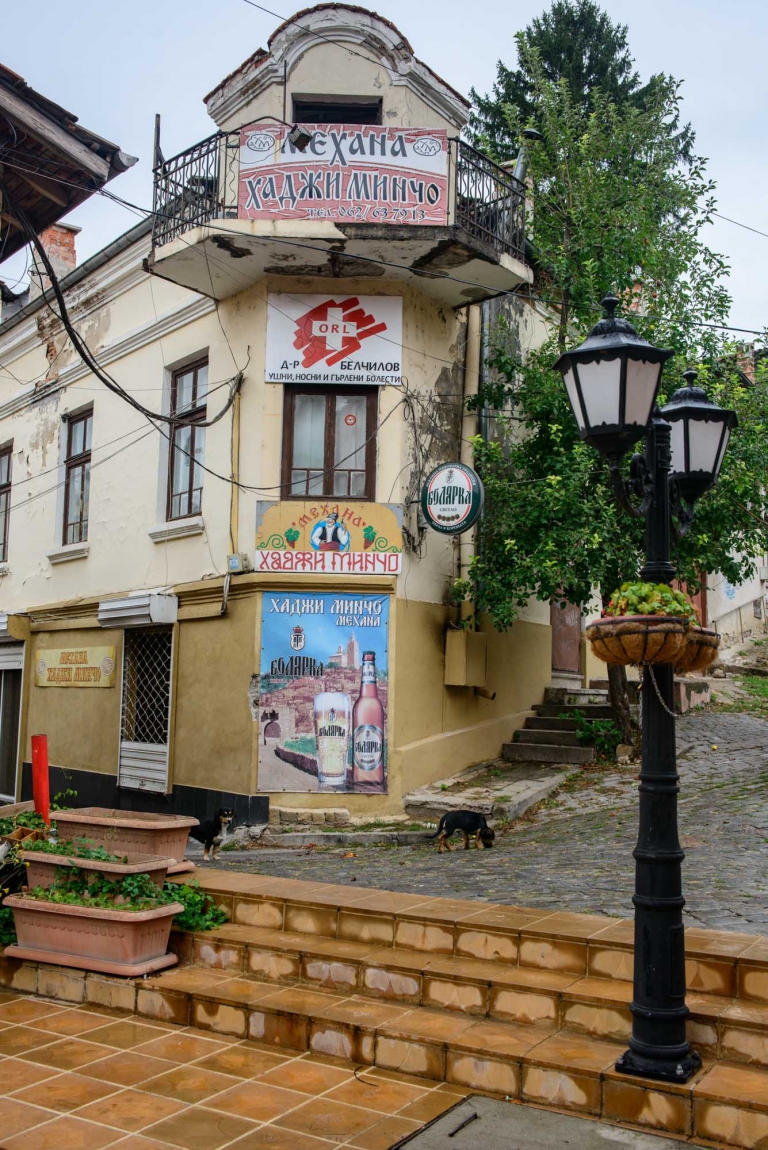 Veliko Târnovo’s historic quarter was once the centre of craftsmanship, with genuine blacksmiths, potters and cutlers, some of whom still practice their trades here. During the 19th century, this was where artisans and farmers from the nearby village of Samovodene came on market days to sell their goods.

In the 1980s the city revamped the area in an effort to recreate the atmosphere of the early 20th century. Samovodskata Charshia still contains several restored Revival buildings (the Bulgarian National Revival period was a cultural movement by Bulgarians to regain their identity from the Ottomans).

We wandered down the cobblestone streets looking into the windows of bookshops and antique shops on our way down to the fortress, posing with the statues on the way. 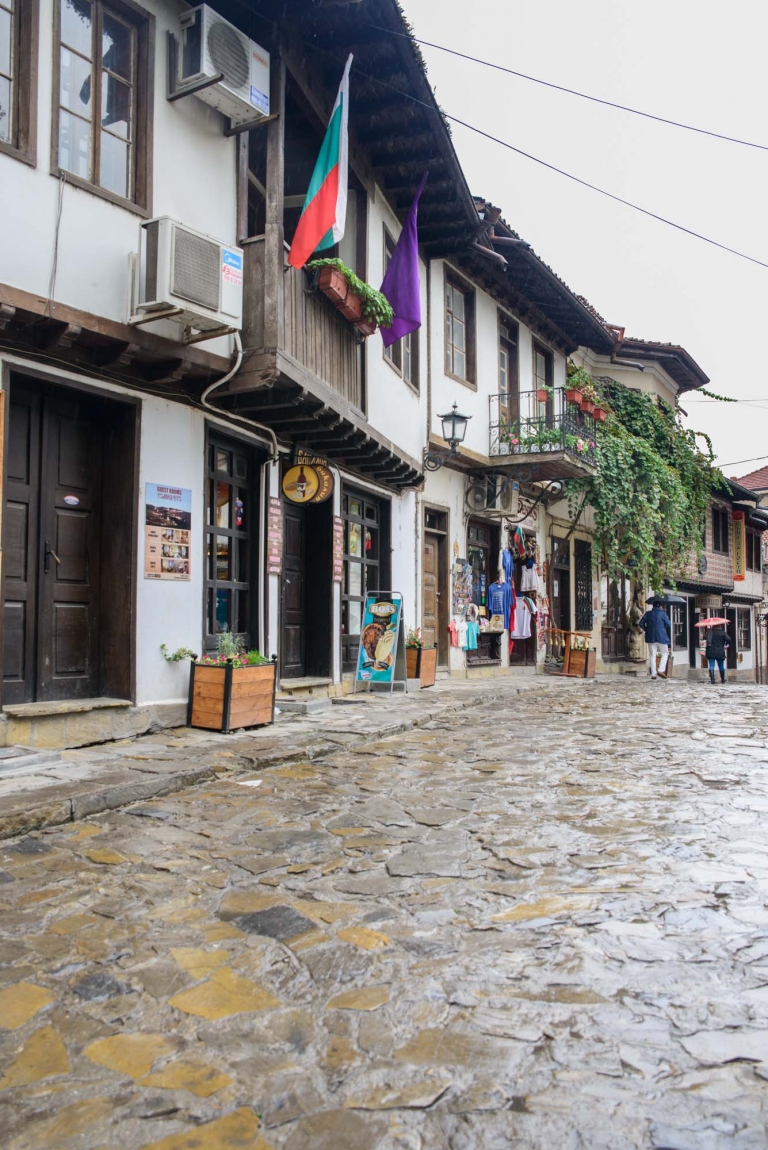 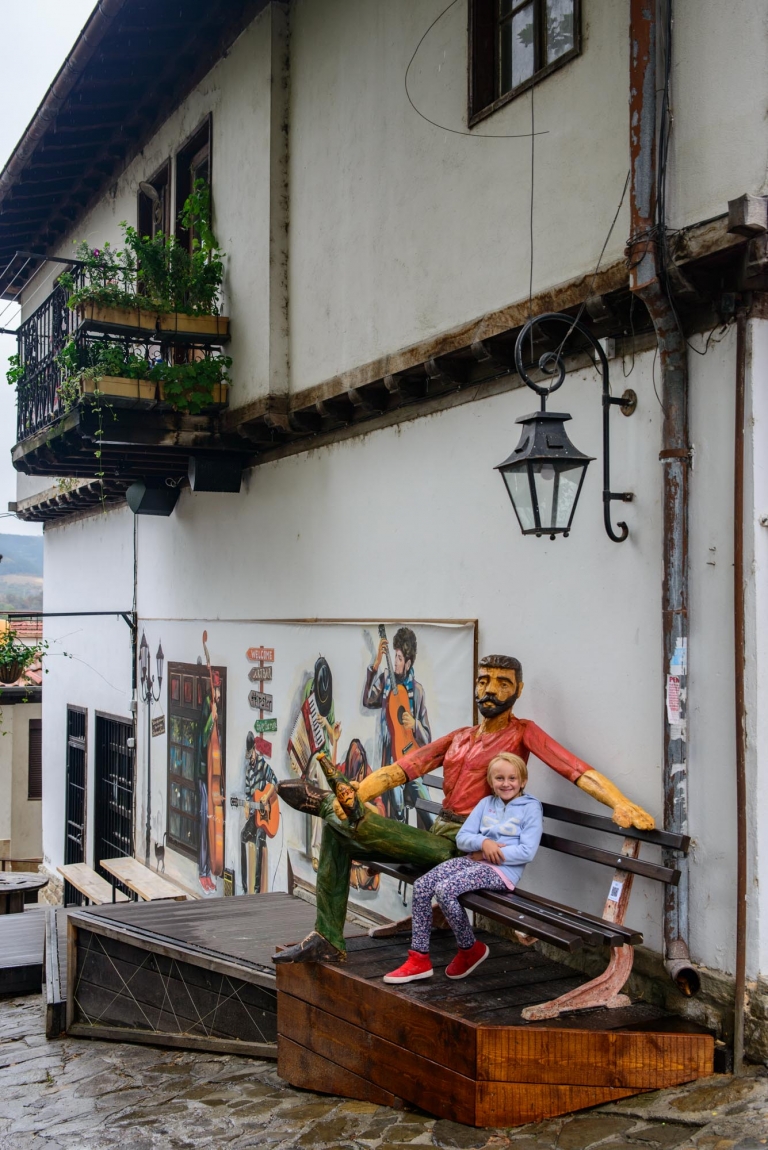 At some point we took a detour and came across these BIG chairs which we had to jump off! Although I was saved from jumping lol. 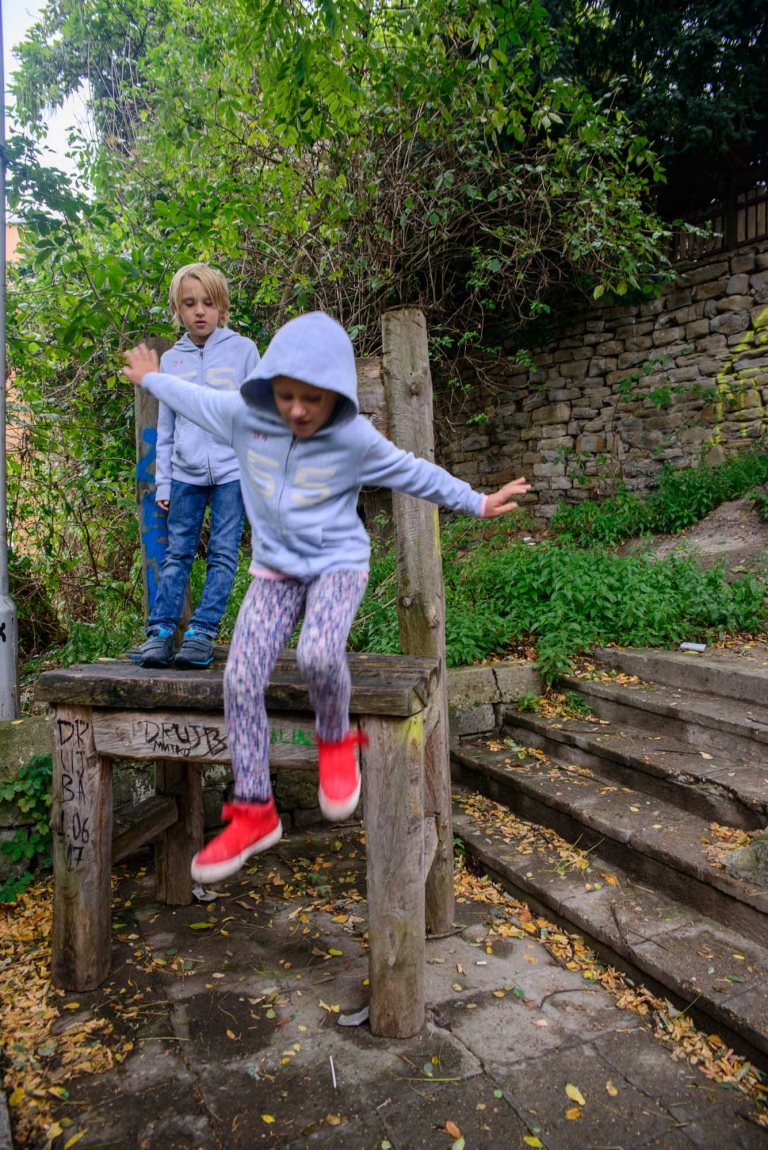 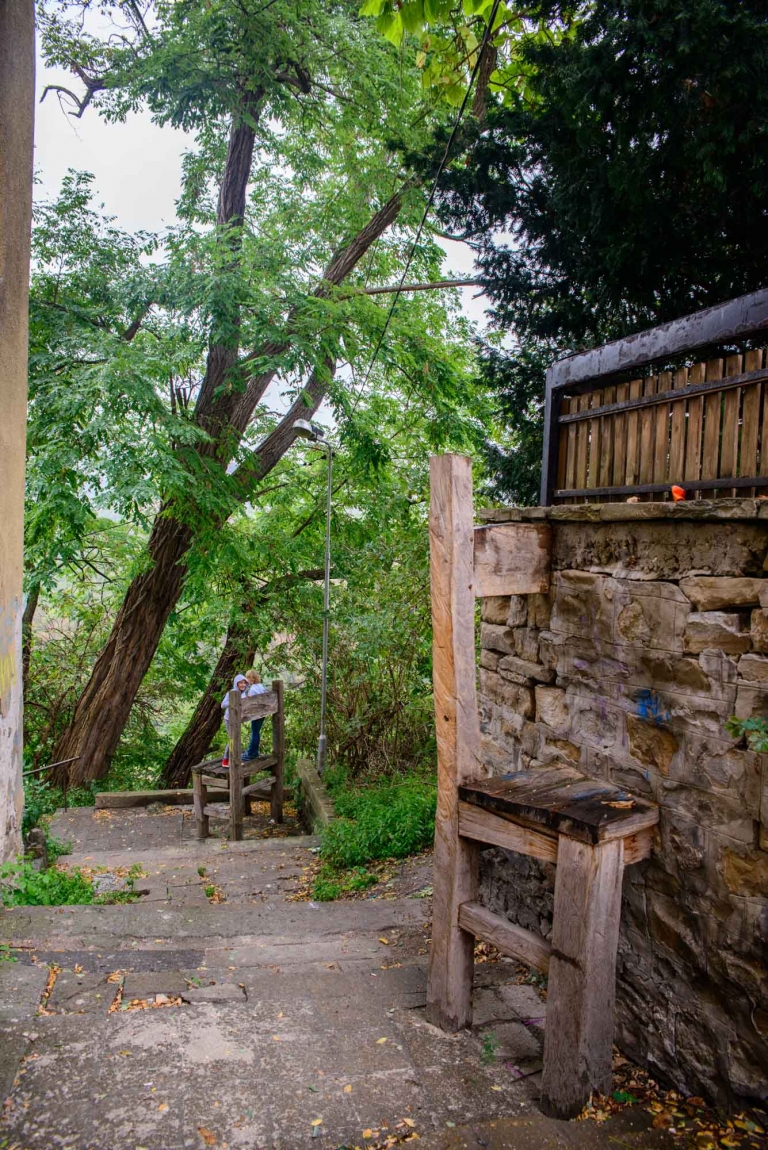 The fortress was the highlight of our trip and we spent quite a few hours here. Despite the fact it never stopped raining the kids were really interested in its history.

The fortress is surrounded with 3,000 feet of stone walls, some of which have a thickness of over 11 feet and height of 36 feet. Once past the main gate, it is fairly easy to navigate the fortress on foot. There is a gentle incline and path, but visitors are essentially free to walk anywhere and climb anything they like – which we did!

If you have a head for heights you can climb on the walls – although be careful not to fall off, it’s a long way down. 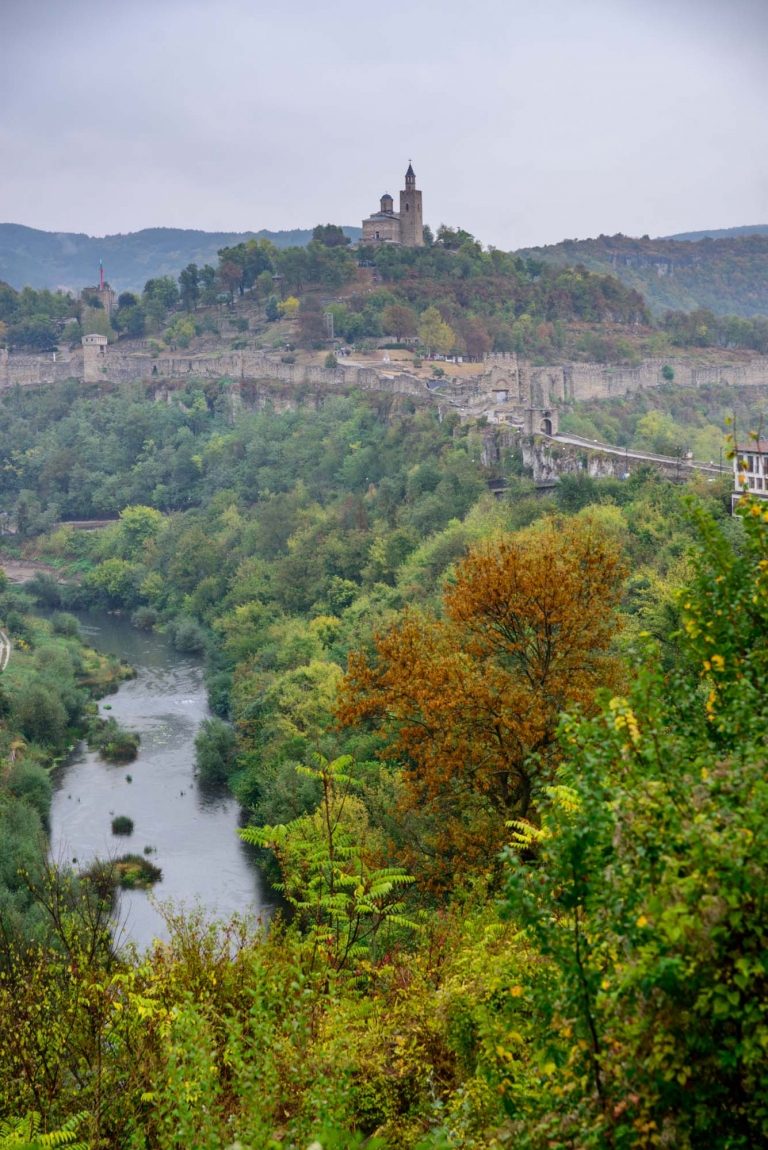 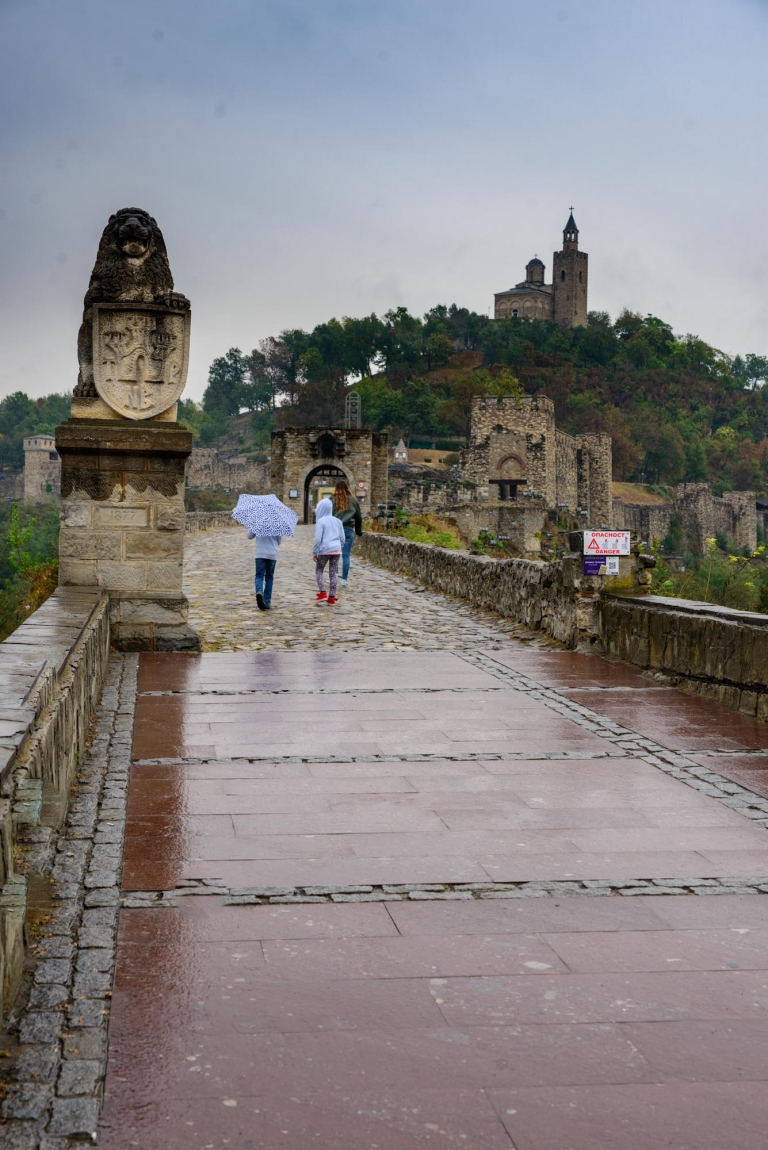 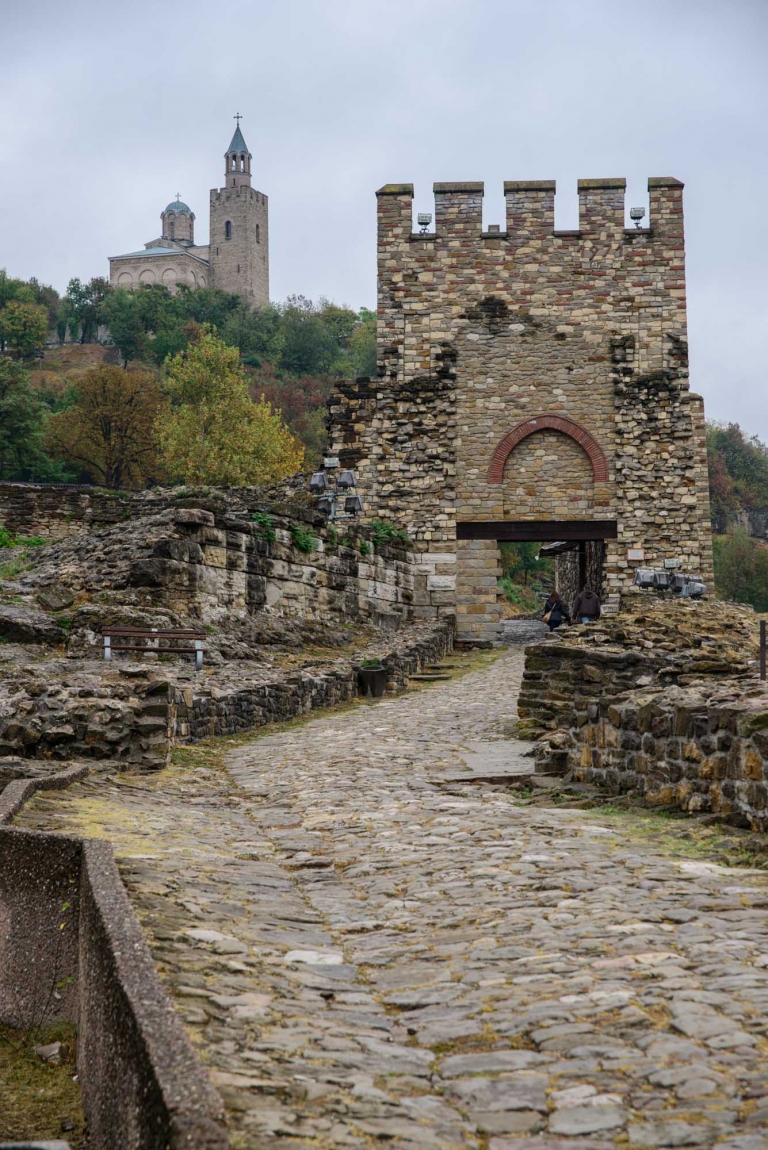 Despite the constant rain and cold, Veliko Tarnovo proved a worthwhile stop-over.  I would like to go back in the summer months to see how it differs and explore more.

There is a lot more to do than we did (but we were slightly deterred by the weather) and we have another two hills to explore after all!

Add this to your pinterest board in three easy clicks.

Spread the love
Posted in Bulgaria
« Sarapiqui with kids? Here’s what to do!
Balls Galore, Museo de Los Ninos, Guatemala »