Should you stay in Taghazout Morocco

Taghazout is described as a small fishing village and is located approximately 19km north of Agadir. We were staying slightly further south in Tamraght so we decided to pop up for an explore and a bite to eat for lunch. This post has written to help you if you’re asking the question ‘Should I book a holiday in Taghazout Morocco?‘. 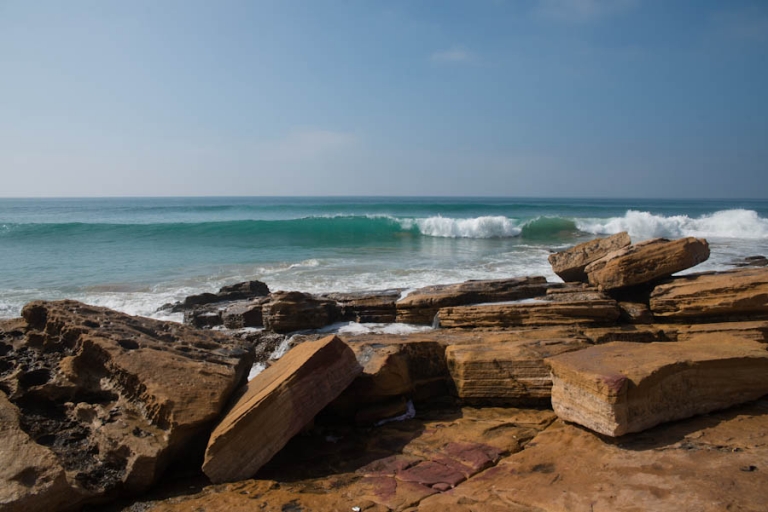 We arrived on a dusty road into a thriving and busy town that straddles the main road. The first thing that hit me was the sheer volume of taxis. I was expecting a small town but I was met with a large mingling of Moroccan (taxi) men all vying for my business – despite having parked a car 100m away!

The town is a hotchpotch of dust and dirt and shops. There is rubbish blowing around nearly everywhere and in some of the smaller, back streets the smell of trash and stagnant water can be quite repugnant.

Parking is the general chaotic shambles it seems to be everywhere and we mustn’t forget to mention the men wearing bibs who charge you to park anywhere. I am convinced this is a tourist scam but maybe it isn’t!? It meant I always had to carry cash and coins everywhere with me which I found a real nightmare.

The rest of the town is busy and filled with tourists and surfers in wet-suits. 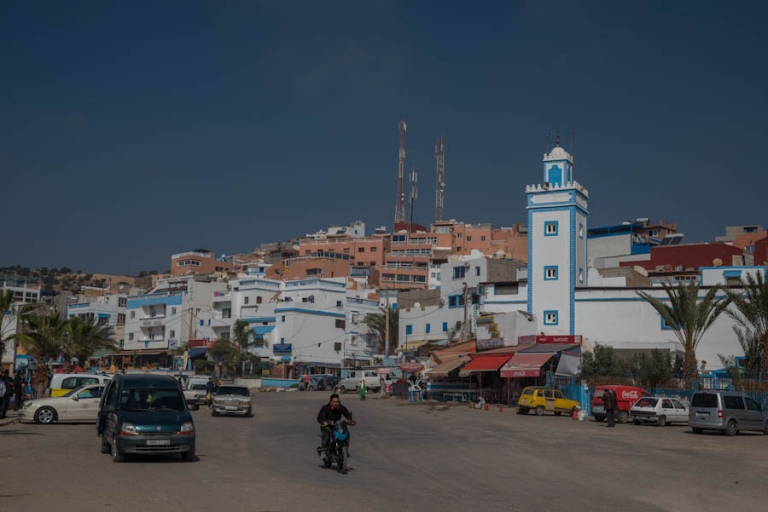 Narrow streets and doors of Taghazout

The town comprises of many steep, narrow streets, small bo-ho shops, restaurants, cafes, surfing shops and riads (small hotels). It is quite noisy and smelly and can be a bit overwhelming, especially if you’re not used to Morocco.

Most buildings are painted white but have brightly coloured doors.  Avoid standing in any type of water as I am sure this liquid leads straight out of houses! It didn’t smell great and attracted plenty of flies. 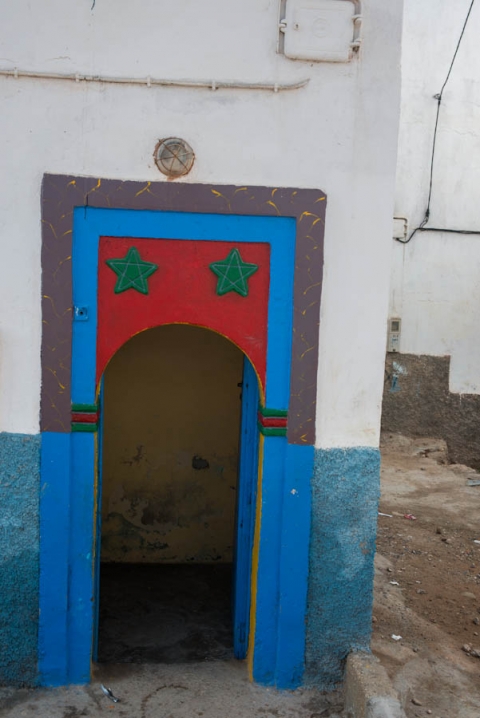 Should you stay in Taghazout? 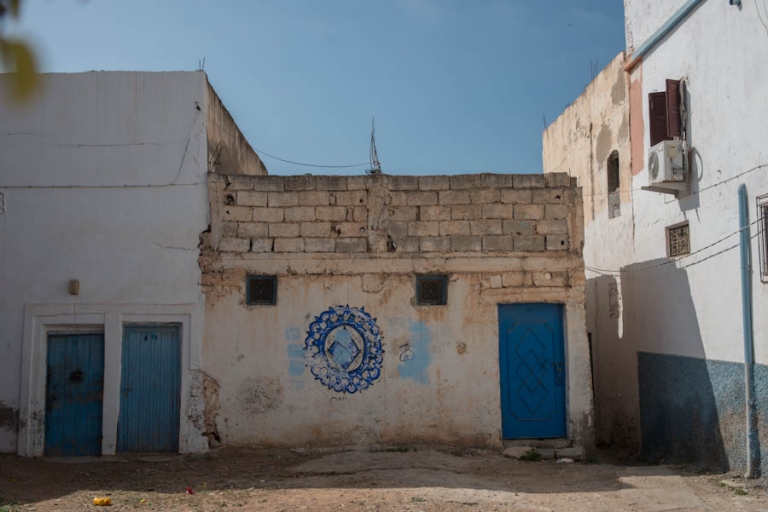 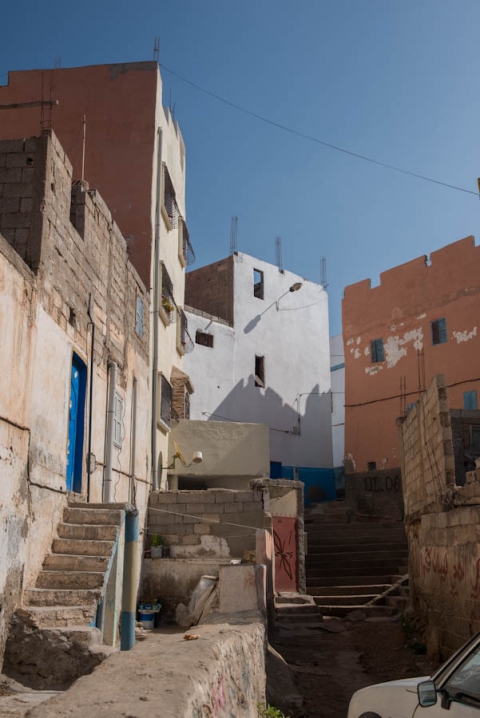 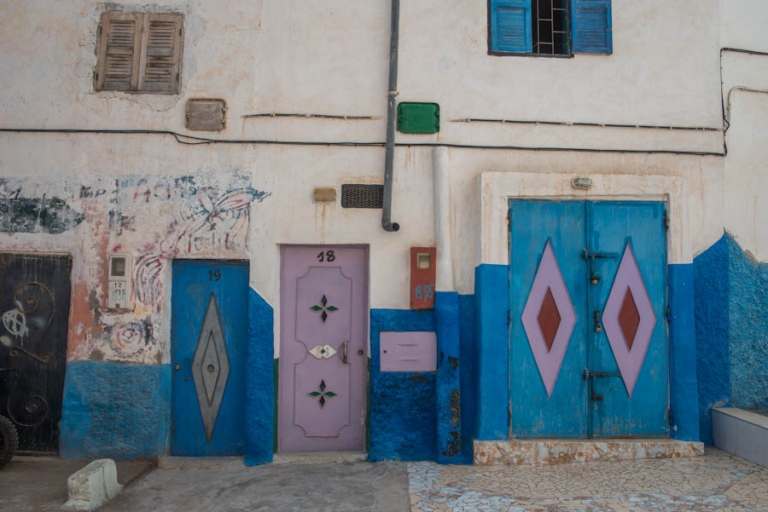 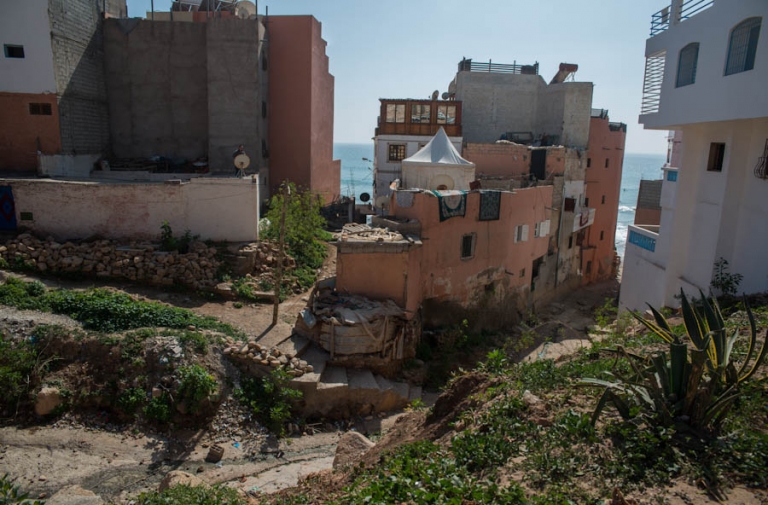 We climbed down from the town to the west where there lies a fishing bay, wooden fishing boats and a small fish market.  Fishing is one of the main income providers – aside from tourism.

On days where there is little breeze, someone told me that the whole town can smell of fish guts but luckily visiting in February means there’s a strong gust most of the time. 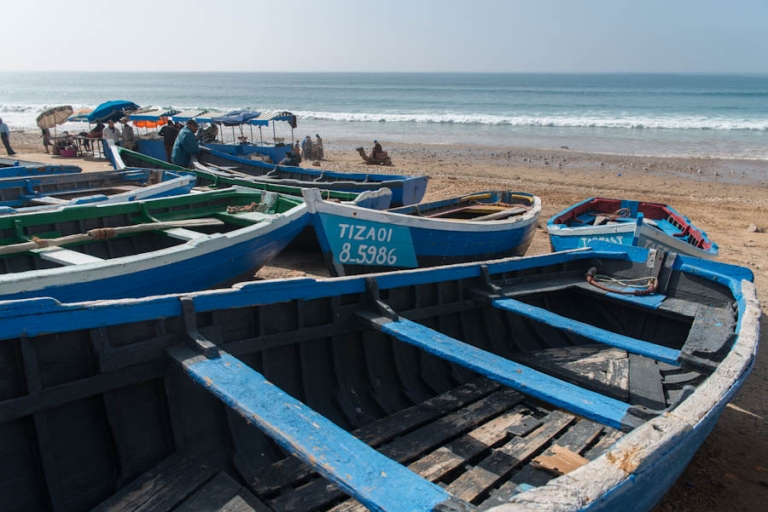 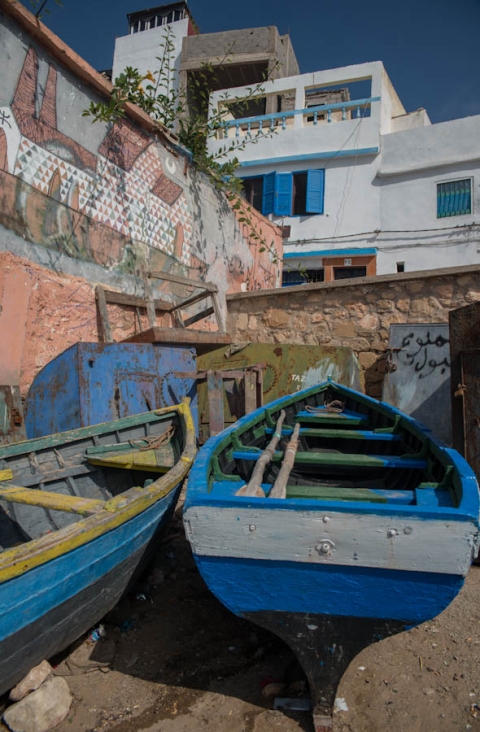 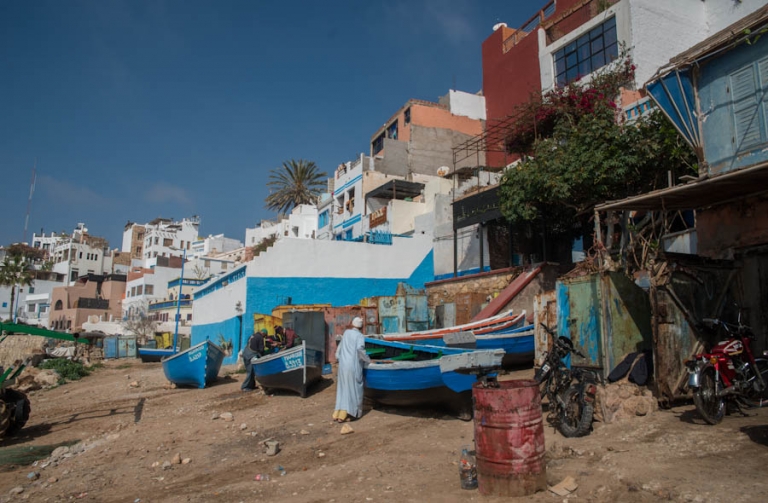 The fishing bay of Taghazout

These animals are regularly abused with lumps of wood. They’re deprived of water and shade and generally abused so we avoid these types of ‘attractions’. Many froth at the mouth to cool themselves down (not because they’re in mating season).

No animal should be forced to perform for our amusement and leaving them out on the beach all day seems unnecessary. 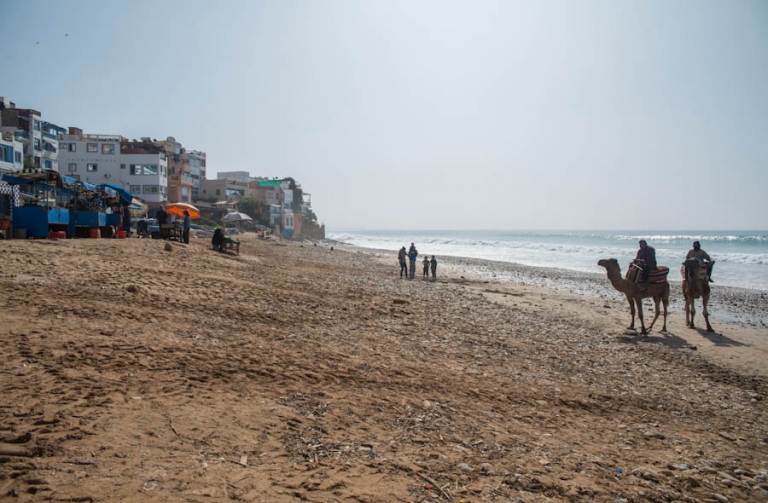 Please say no to animal tourism 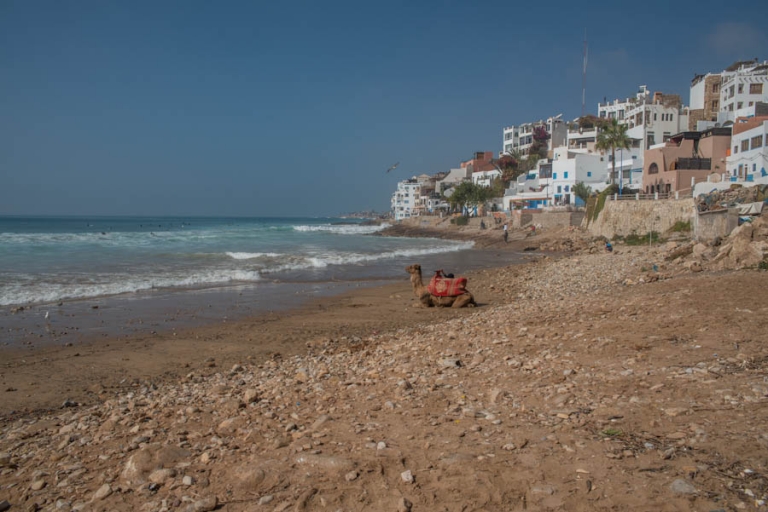 A man shelters behind a camel

Walking on the rocks

Leaving the fishing market behind, we climbed across the rocks heading north until we met a pathway leading through sun terraces belonging to local restaurants. The restaurants are busy throughout the day but we managed to find a small restaurant that would serve us veggies, french fries and a salad (dripping in water). This was a HUGE mistake as 2 days later we were all violently ill. The most ill we have ever been and for a while it was quite scary as I could not keep anything down. Sadly the diarrhea remained in all of us for the next three and a half weeks.

The food served in this area is generally fish and fries or tagine but there were also a couple of cafes selling smoothies and sandwiches.

The walk is pleasant but there is a lot of rubbish everywhere which detracts from what could be a lovely place. The rubbish sits in puddlles of stagnant water, it floats in the ocean and it blows along the road. 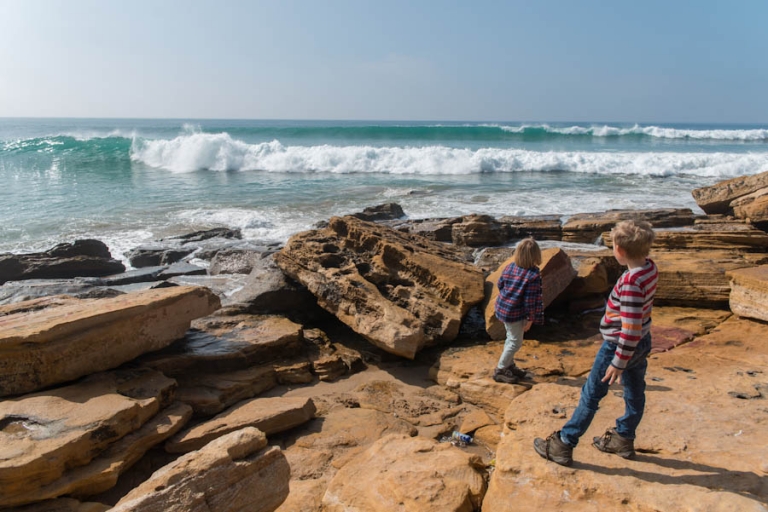 Climbing over the rocks in Taghazout 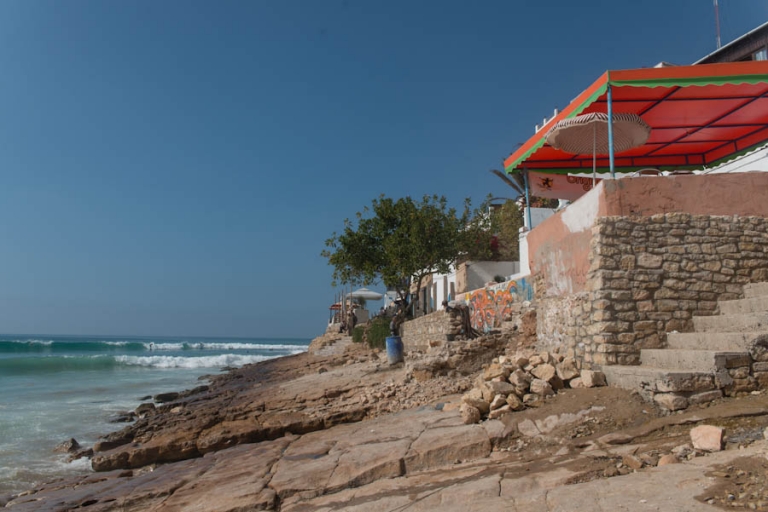 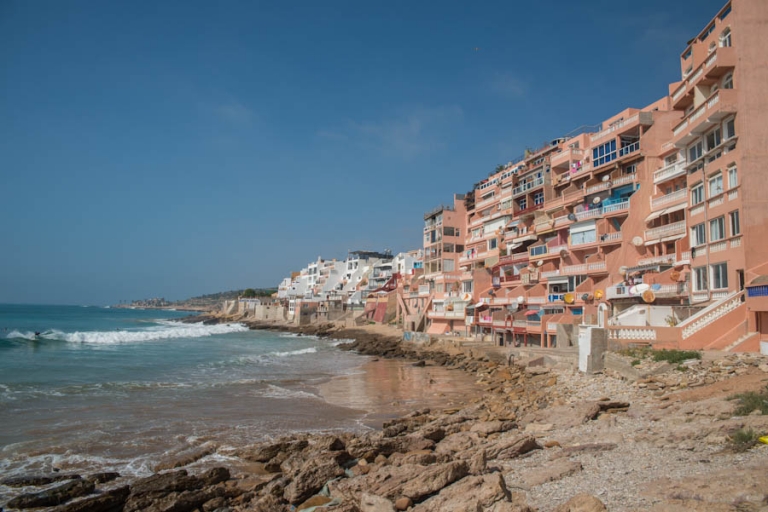 The bay of Taghazout which is lined with hotels, riads, homes and restaurants.

Surfers can be seen in every direction and litter the waves like seals. It is quite a sight to see just how many can fit in the water.

There are many surf schools around the bay and the waves are always filled with an array of beginners trying their boarding balance. 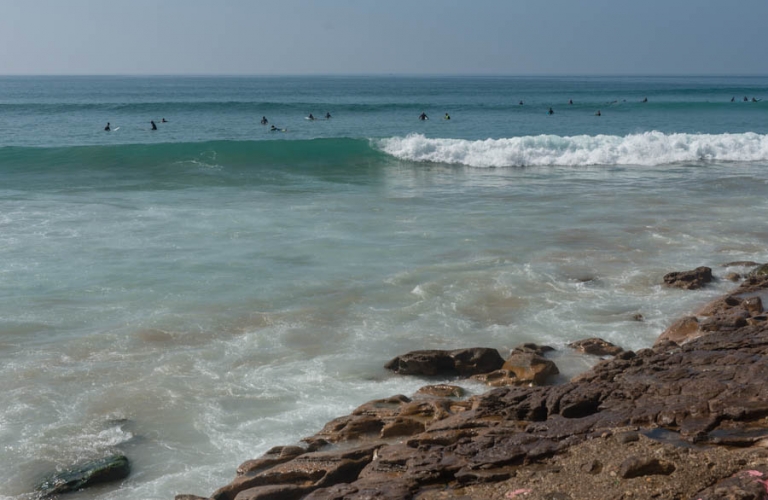 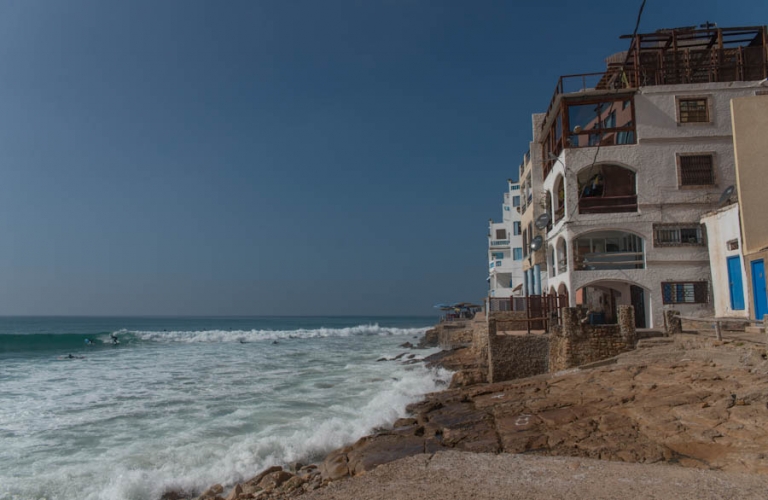 Is it worth a visit?

I thought Taghazout was quite touristy. It was certainly very dirty and smelly in parts but it is definitely worth a visit if you’re in the vicinity. I wouldn’t make a special trip to see it though and I wouldn’t really want to stay here.

However if you’re planning on attending a surf camp it might not be too bad.

We visited in February when the weather was warm enough to give us a sun tan but windy enough not to have to cope with the smells that Morocco produces.

Where Could You Stay In Taghazout?


What else could you do in Morocco with kids?