Solta Island Things To Do. Find A Secret Cove Stomorska

We’re always looking to beat the tourists and find local-only spots and we happened across this little cove on Solta Island purely by chance when we were walking the dog. If you’re looking for a Croatian Island to stay on and a gorgeous little cove, check out this place on Solta Island.

Why Should I Holiday On Croatia?

If you haven’t been to Croatia yet and you’re asking yourself ‘Should I have a holiday on Croatia?’, the answer from all of us is an unreserved ‘YES!’.

We first discovered Croatia back in 2006 and have been back five times since.  There is nowhere else in the world that we have returned to so many times, in fact, we usually have a ‘visit once and don’t go back’ rule. There is just something so magical about Croatia that it draws us back all the time.

Maybe it’s because we love those crystal clear waters and the heat of the sun beating down upon us? We adore being close to the water and Croatia has 718 islands, 389 islets and 78 reefs, making the Croatian archipelago the largest in the Adriatic Sea and the second largest in the Mediterranean Sea with only the Greek archipelago being larger.

This time we picked two islands at random (Pag & Solta), had a festival on the third (Tisno) and arranged to meet some family on the fourth (Brac).

Split to Solta (pronounced Sholta) is only 9km and getting there is remarkably cheap both on foot and with a car on the ferry.

We stayed in Stomorska, a smaller town to the north-east of Solta.

Solta is not that busy – in comparison to the hoards that frequent many beaches around the world – and although there are generally people everywhere you go, it isn’t too much. Still, if you’re looking for something very secluded & a bit off the beaten track this cove is just the thing!

This secret cove is surrounded by steep-sided rocks suitable for sunbathing & rock clambering and the shallow waters in the cove are great for paddling, snorkelling, swimming and once you get out of the cove SUP boarding and canoeing the rocks and coastline around the area.

How To Find The Secret Cove

There’s no proper road there yet although it does look like one’s being built. It is a white, chalky track that goes up and around the coastline. You can use or download this map by clicking on it.

Video Of The Secret Cove

We went to this cove a number of times and it was magical. If there happen to be people there (there weren’t for us), just keep walking around the rocks a little.

Where To Stay On Solta Island

We stayed in the gorgeous town of Stomorska where the cove is.  We booked this apartment called Vana, overlooking the water.

Add this to your Pinterest board and don’t forget to check out ours too. 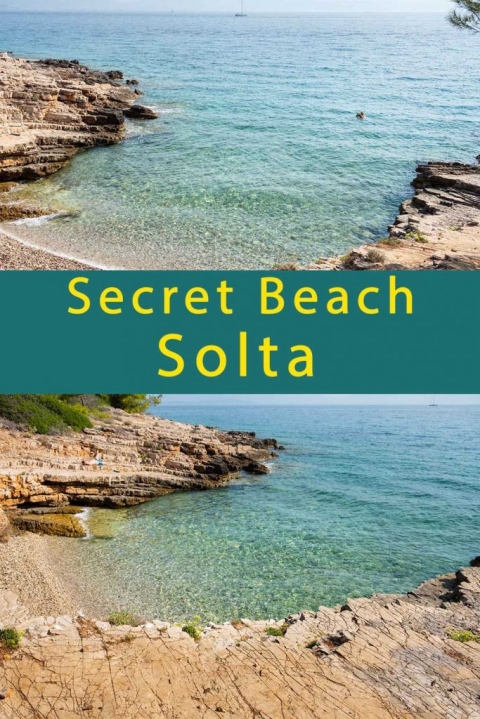 Spread the love
Posted in Croatia
« We bought a house in Bulgaria. You can too!
Best Pag Beaches For Kids. Croatian Island of Pag »