Thermal Baths With Kids In Budapest? Which Should You Visit?

On our visit to Budapest, we loved visiting the thermal baths. So, which thermal baths with kids in Budapest should you visit? This post gives you some options.

Gyógyfürdő is Hungarian for Spa!

Budapest sits on around 125 thermal springs (70 million litres of thermal water a day)  and its nickname, since 1934, has been ‘the city of baths’.  It has more thermal and medicinal water springs than any other capital city in the world so if you’re looking for a thermal bath, you’ve come to the right place.

Thermal baths in Budapest are a legacy to both Roman (2nd century) and Turkish occupation (16th century) and whilst some original Turkish baths still exist, many are modern spas that offer a range of aqua therapy treatments as bathing pools. There are 15 public thermal baths in Budapest, not counting the private thermal spas established in some luxury hotels. Depending on the time and the day of the week, baths can be for men or women only with most days being favoured for men!! Yes, let’s not say that sexism isn’t rife.

A typical bath complex will have multiple pools; big pools with cooler water are for serious swimming, while the smaller, hotter thermal baths are for relaxing, enjoying the jets and playing chess! You may also find a variety of sauna rooms, steam rooms, cold plunge pools and outdoor bathing areas.

Thermal Baths With Kids In Budapest. So WHICH Should You Visit?

Kiraly baths came recommended to us by a French family as being the oldest, most authentic and less touristy baths. Sadly upon reaching Kiraly we also realised that they don’t accept children under 14 years.

Kiraly is one of the medieval Turkish baths built by the Ottoman Turks in the 1565. The baths are small and described as uniquely Turkish. The water in the pools ranges from 26-40*c

Lukacs has a reputation for being a locals’ baths, as tourists do not frequent the baths as much as others in Budapest.  It was first opened in 1894 and is set in a small park and medicinal facility. It has a total of eight pools, five thermal, a range of saunas and offers treatments such as physiotherapy, massages, mud treatments and salt chamber rooms. Not all the pools are open to the public however you can book specific sessions in advance.

The grounds are pretty and people who have been cured at Lukacs have left marble tablets in the courtyard to express their gratitude, with the oldest tablet dating back to 1898. It has a bit of a reputation as an artist’s retreat!! It also produces its own bottled water, labelled Szent Lukács, that is helpful for stomach problems, gallbladder and kidney stones. It comes in green bottles so keep an eye out.

The main thermal baths are circular in shape with one end being a whirlpool. The other end houses the bubble lounges and water spouts. The actual two swimming pools are segregated into gender and you will need to have a swimming cap to enter them!  There a quite few saunas, including a herbal one and a salt room. It is a basic spa but family-friendly and welcoming to children.

A daily ticket with a changing cabin cost us 3200 forint each, which was about 50 euros a family. They operate an electronically tagged bracelet system for access to the pools and your cabin, which we found safe, however, we have read reports of cabins being accessed and items being stolen. The simple message is, don’t take anything of value and don’t leave anything of value there. The cabin remains yours as long as you’re in the spa.

My GoPro died just as we got into the pool, so I have borrowed some photos from their website! 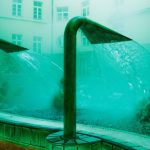 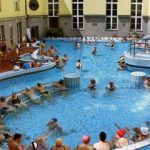 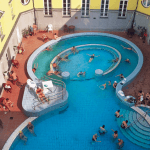 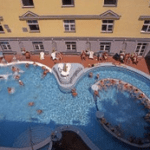 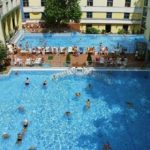 The bath has six therapy pools where the temperatures are between 16-42C, dry and steam sauna chambers including aromatherapy and one swimming pool.  You can also book treatments such as massages, scrubs, healing drinking and foot care. This is also the only spa that offers night hours from 10:00 PM until 4:00 AM on Fridays and Saturdays!!

Upon entering, you are given a choice of 3 packages and we chose the wellness package which cost 4000 HUF each.  The wellness package includes the rooftop panorama, pools and sauna world. We paid using a credit card and kept the receipt as we had read of other people having their credit card details cloned thereafter using the cash machine.

Again this pool works on an electronic bracelet system but this time we chose not to have our own private cabin but to use the public changing rooms. They were clean, quiet and although there weren’t many free lockers but did eventually find one.  These pools are much bigger than Lukacs and more modern. The place is slightly like spiral maize however and for the first hour, we found the layout confusing. You cannot enter certain areas without having first entered others which does make it time-consuming.

The pools are family-friendly (although the hot thermal pool of 42C is out of bounds for kids). Staff objected to me using my GoPro in the actual pool but nothing was said about me using it anywhere else. The panoramic pool is incredibly busy but well worth it if you can watch the sun setting over the Danube. Our favourite pool was the 42C pool which had a strong sulfurous odour but our skin felt amazing for the next week!

There are many different saunas and steam rooms all varying in temperature, dryness or smell. If you can stomach the steam room which is 100% humidity, I do recommend it.
For more info please see their website. 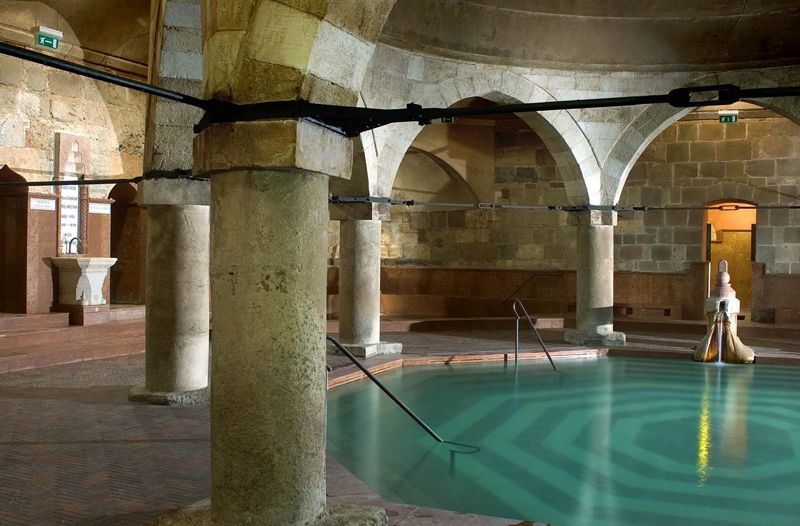 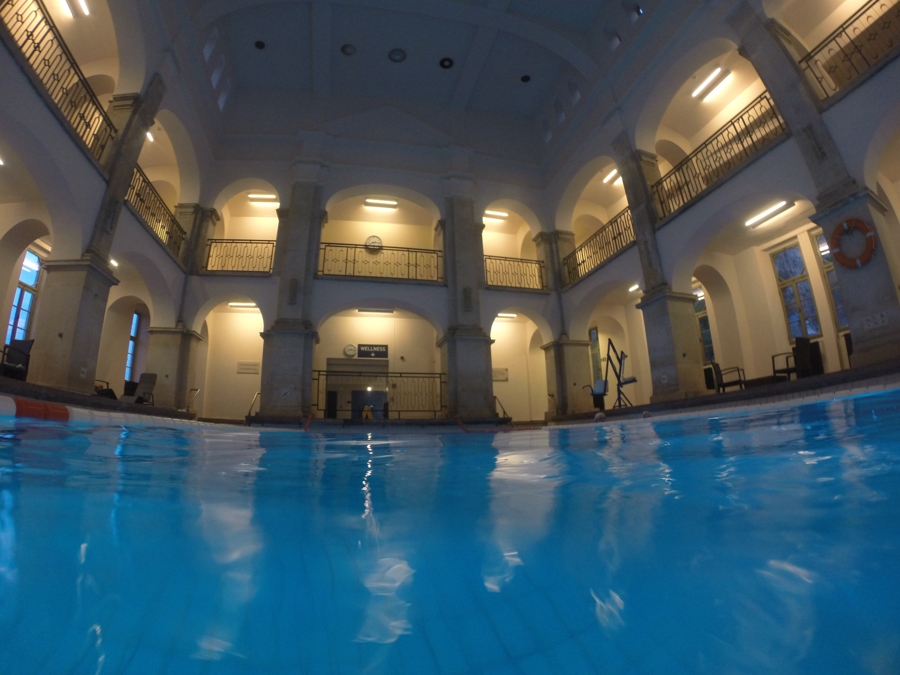 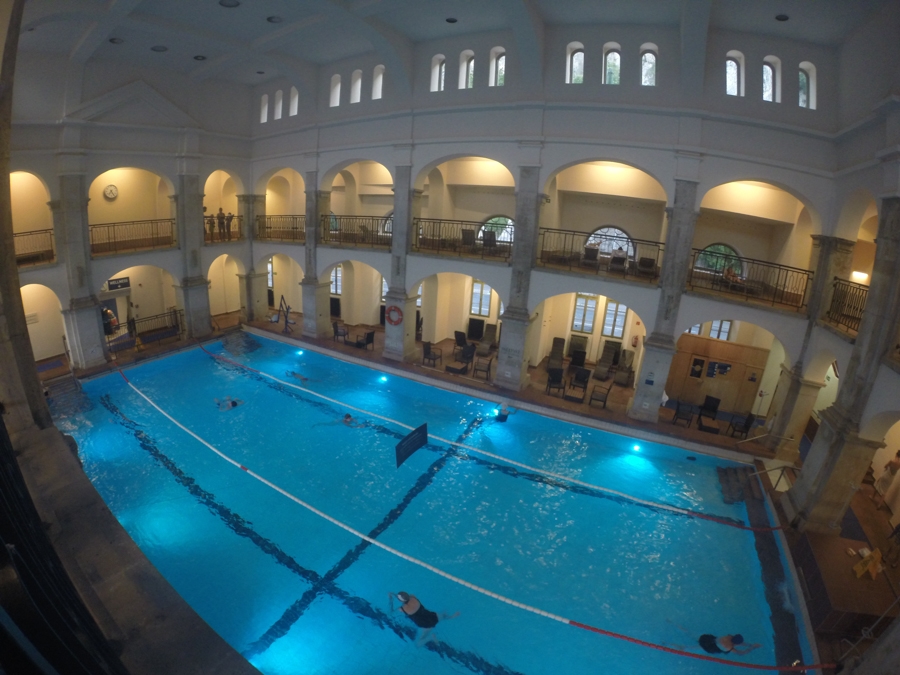 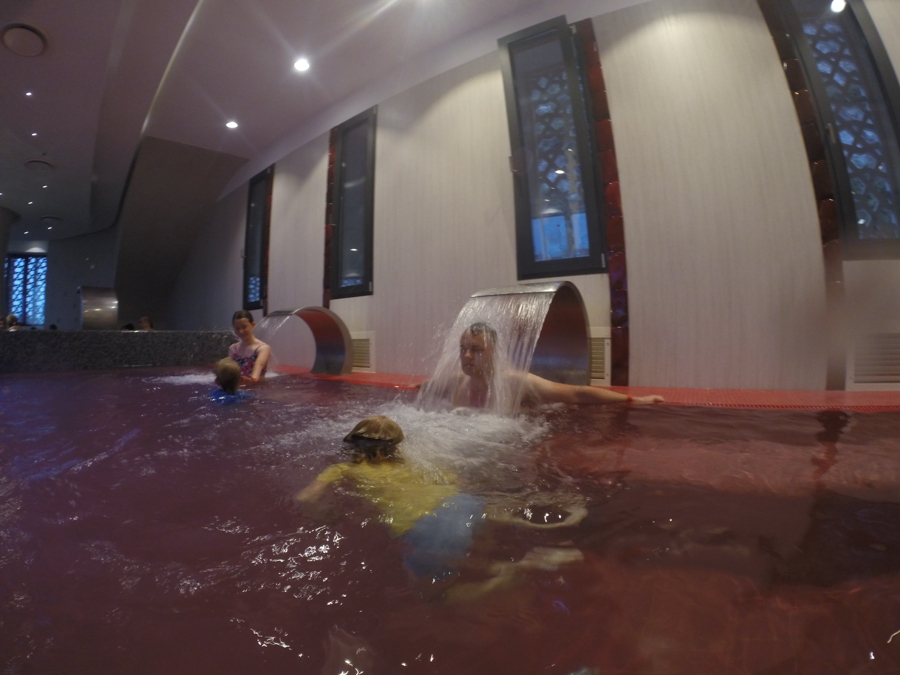 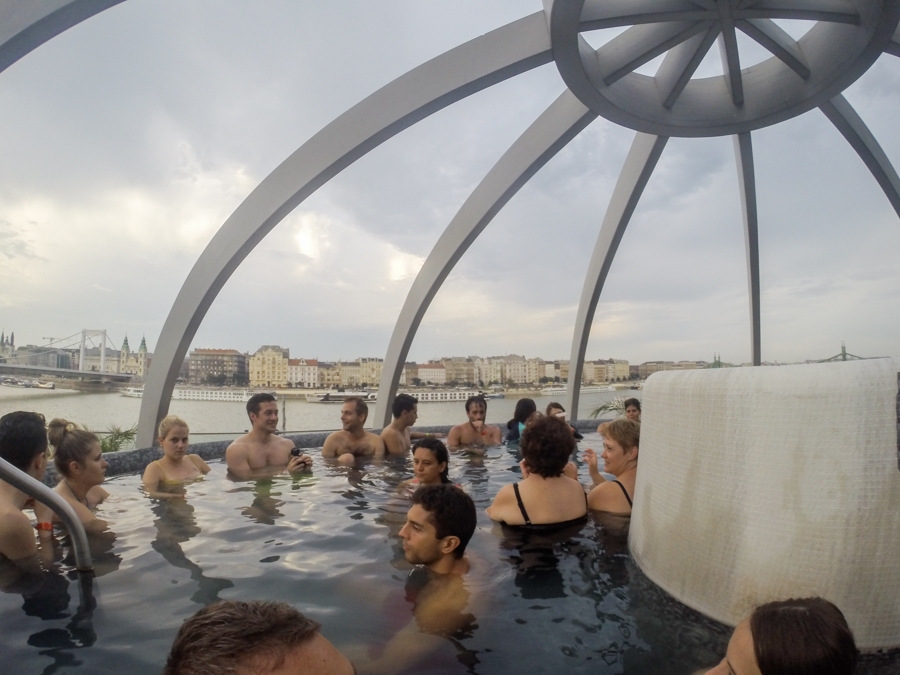 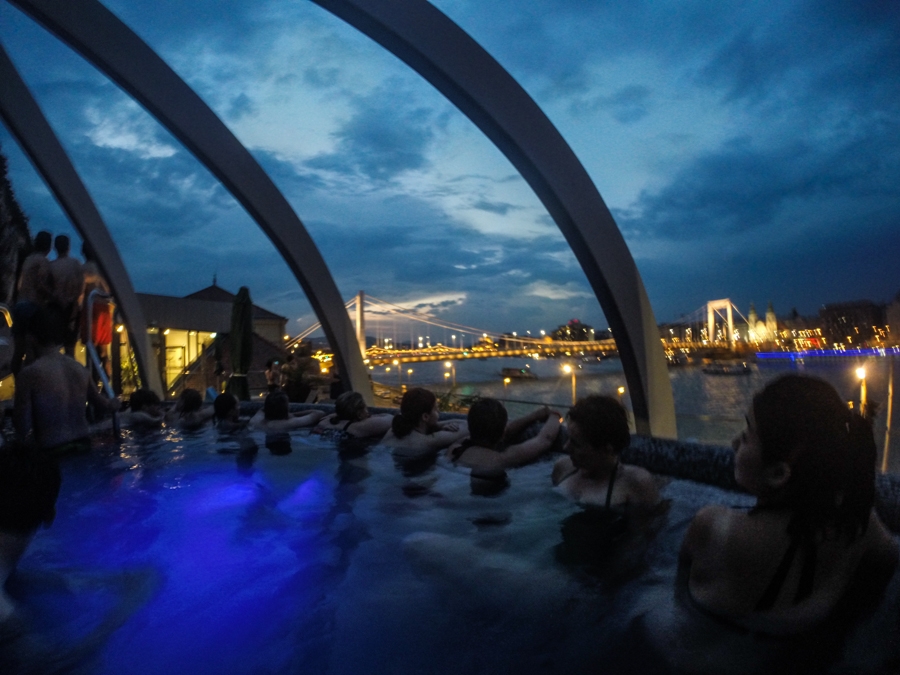 Budapest is divided by the Danube River. Buda sits on the west and Pest on the east. We stayed on the Buda side which was good for access to the spas.

If you liked this post on thermal baths with kids in Budapest, check out some relevant posts.