Krakow With Kids: 13 Fun Things To With Children In Krakow 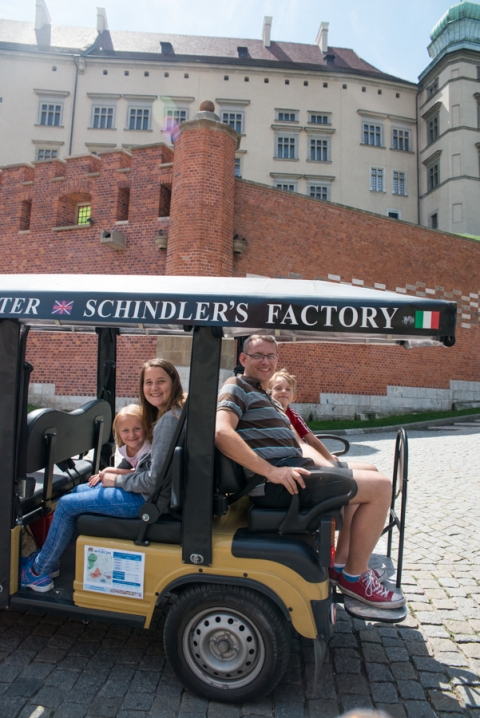 We Only Spent 45 Minutes In Krakow With Our Kids? But Why?

We were on a huge summer-holiday tour of western Europe with our car that had a cracked head gasket. We were in the position where to fix it would outweigh the value of the car and so we decided just to keep patching it up as best we could and drive it until it died. This approach lasted us well for four countries but then as we were driving through Sweden, it took a turn for the worse and we had to order a product from the UK.

We were waiting for this car product to arrive by courier in Berlin and weren’t able to leave until 6pm. We eventually made it to Krakow 8 hours later at 2am so you can see why we weren’t up at sunrise to explore this magnificent city.

Due to this our allotted time in Krakow was a whopping total of FORTY-FIVE minutes…. instead of an entire day. 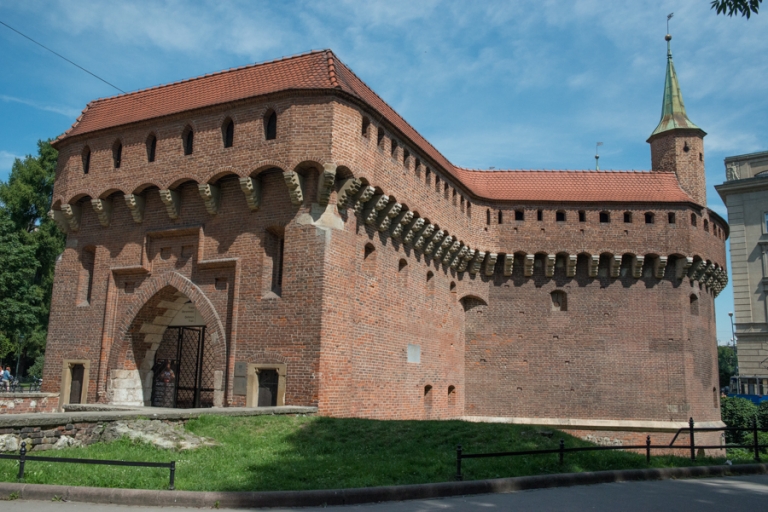 The Barbican. A fortified outpost connected to the walls protecting Krakow.

So, What Can You Actually Do In Krakow In 45 Minutes?

You can catch a guided tour on a golf cart! It was really just what we needed; light-hearted, relaxing fun. If you’re visiting Krakow with kids, it’s definitely worth considering – although there are 13 other options at the bottom of this post. 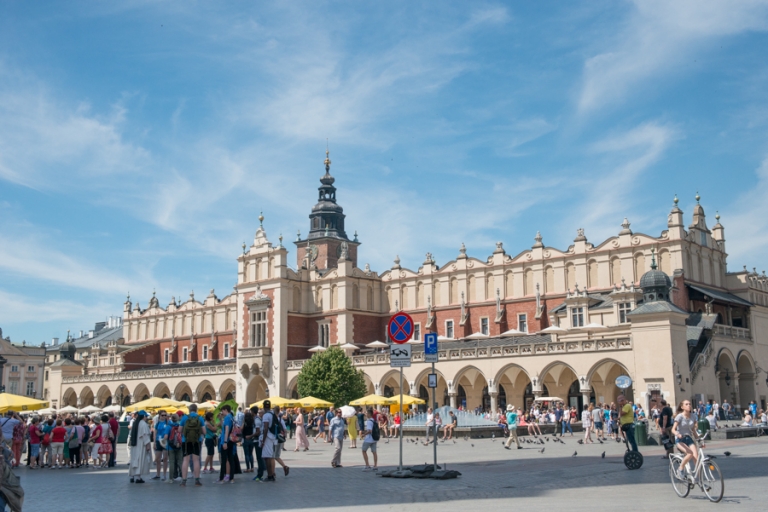 The market square which is 40,000 square metres!

Our tour guide was provided by ‘Guided City Tours’ and our tour for the hour was Marco Spaggiari. He was really lovely. Very kind to the children and very patient when I decided I had to get out to take a photo!!

The tours can be given in 26 different languages so don’t worry about any language barriers.  We decided to have a tour around the old town however they also offer tours around the Jewish quarter, the Ghetto and Schindler’s factory.

If you would like to book Marco, his business card is below. 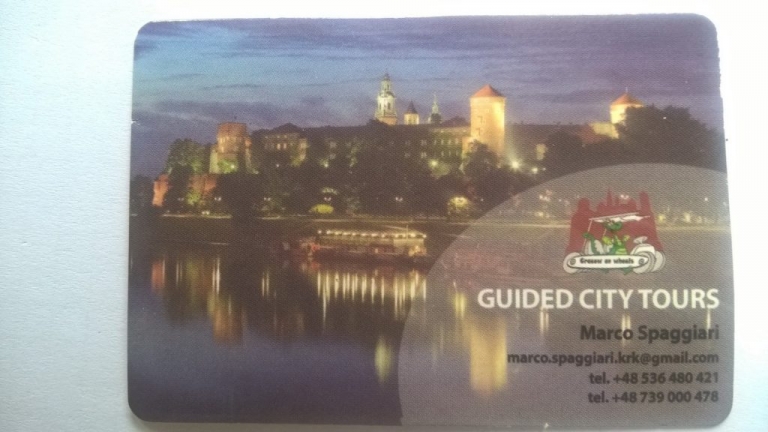 The Old Town Of Krakow

Krakow was preparing for a visit from the Pope, four days after us, so the streets were much busier than usual. It was estimated that over a million people would be descending upon Krakow for World Youth Day.

Krakow is one of Europe’s oldest cities and became the capital of Poland in 1038. The ‘old town‘ as it is now referred to is the medieval city which was established in 1257.  Most of the streets run off the Grand Square.  The city used to have fortifications around it however only a few parts of this wall still stands. In its place is The Planty Ring of Gardens.

Krakow, like many eastern European countries, has an interesting history flitting between democratic Poland, communist Lithuania, sleepy Austria and returning to modern-day Poland.

It is definitely worth more than a 45-minute visit and we would really like to go back. 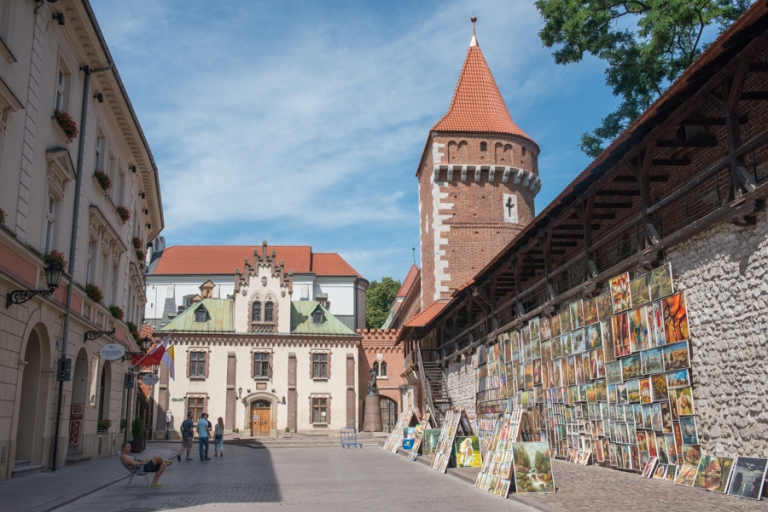 A remaining section of the fortified walls, to the right. 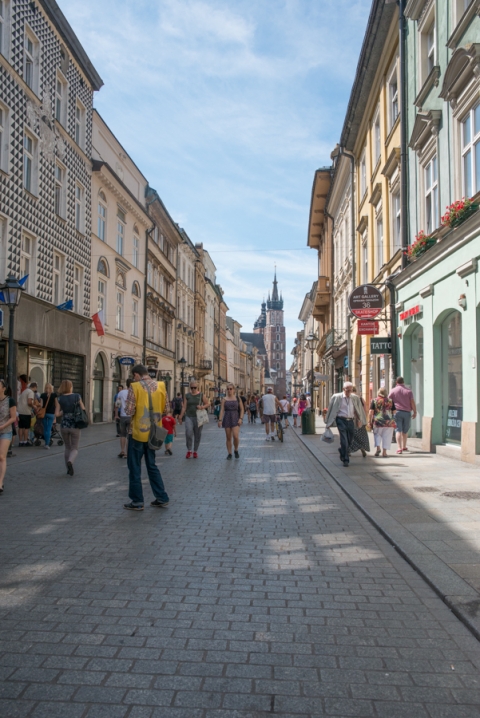 Main street leading from the Barbican to Grand Square 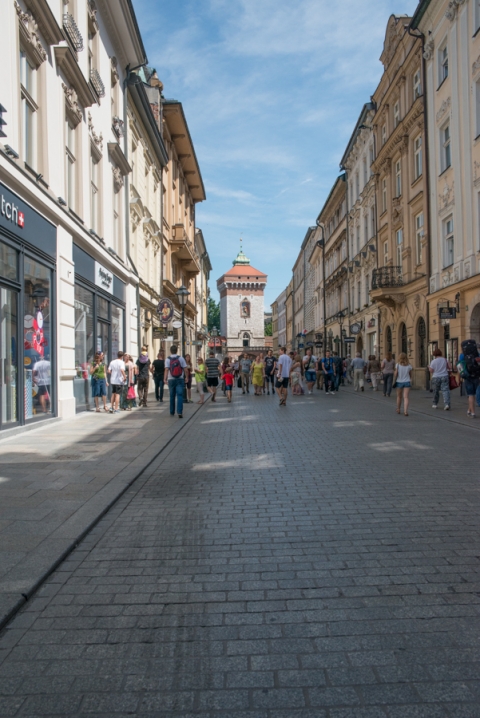 Looking back towards the Old Wall and Barbican. 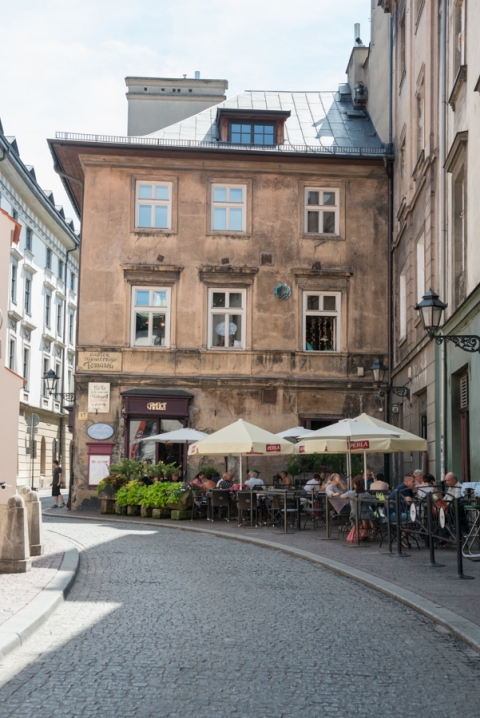 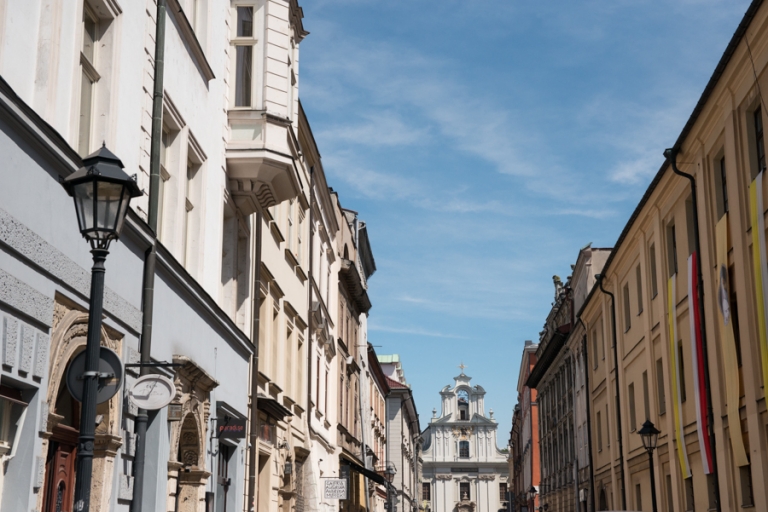 Streets dating back to the medieval period.

Get Cheap Flights To Poland. They often start as low as £20.

I am quite convinced that our tour guide told us there were 127 churches in Krakow but of course now I cannot find any literature to actually prove it. Wikipedia states that there are over 120 but doesn’t give me an exact figure. 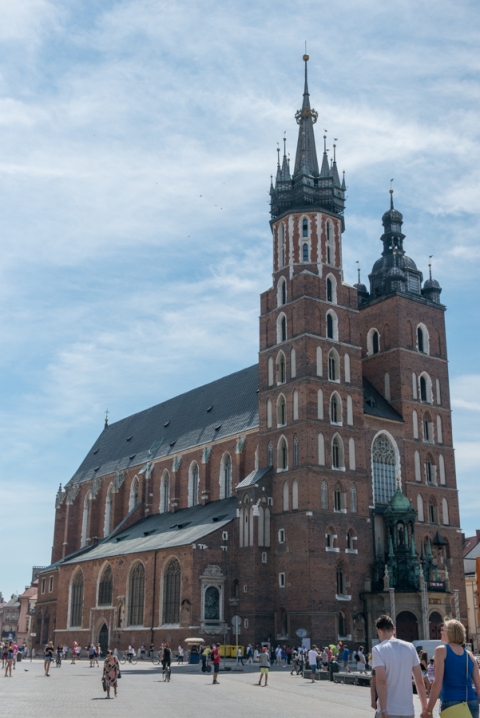 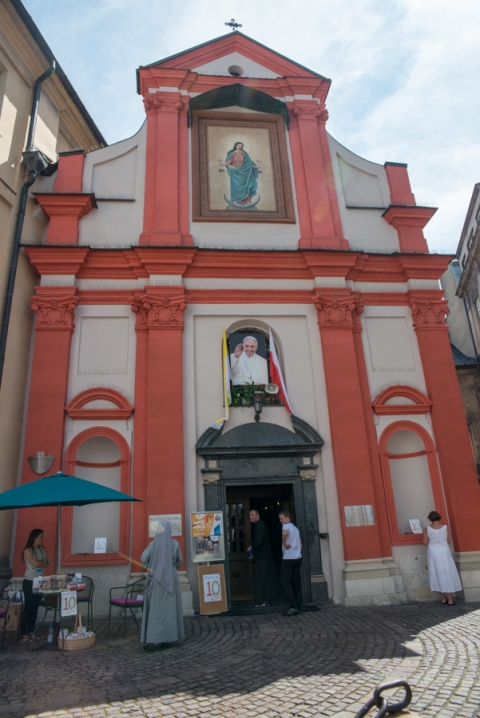 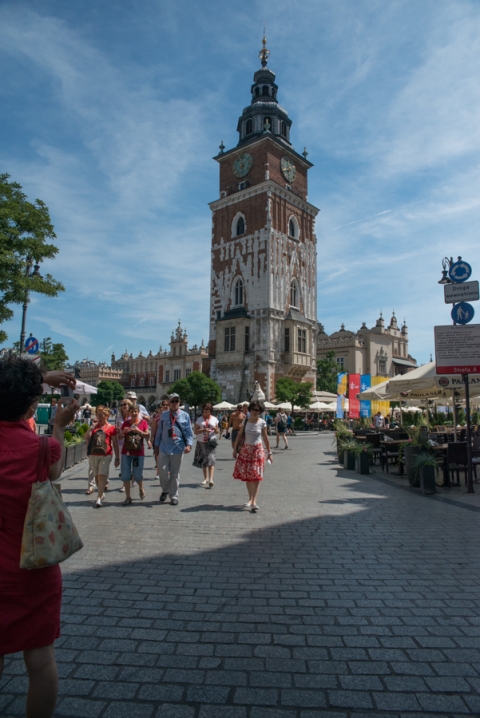 Road off the market place 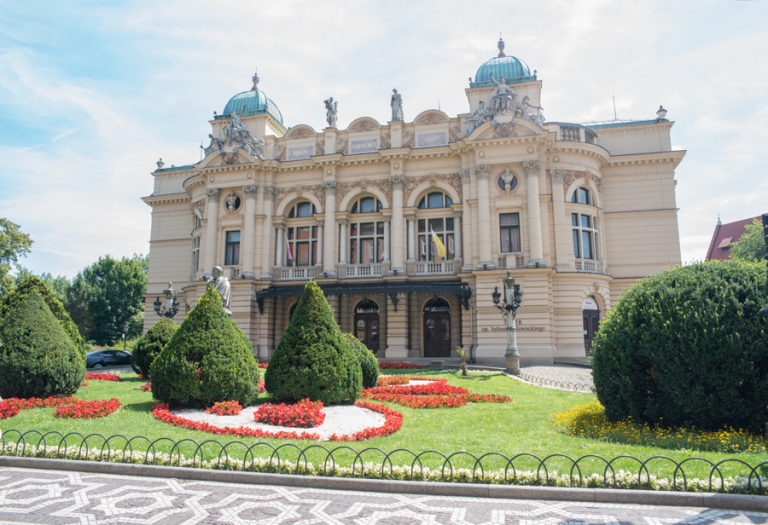 Self-drive around Poland with RentalCars. Get A Free Quote Below

What Else Can You Do In Krakow With Kids?

The market square is huge and is always filled with street entertainers, easter and christmas markets, market stalls and cosy cafes. It’s a Krakow tradition to buy your child a polish bagel called obwarzanek. They’re on sale in various places around the square.

This museum is under the market square and it displays a thousand years of Polish history in a super modern way through hi-tech experiences.

This tour gives you a great intro to Krakow’s history & the layout of the city. Although it’s free, you’re supposed to tip. The meeting point is between the Florianska Gate and the Barbican.

Take the kids to see Poland’s old airplanes! This is a looking and touching museum, perfect for children to explore.

Wawel’s history began over twelve centuries ago however, the castle you see today is the result of multiple rebuilds following an array of destructions.

Krakow’s Kazimierz which was inhabited only by Jewish people is an old quarter dating from the XIV century. It used to be a seperate city with its own walls and is now a bustling and thriving warren of restaurants and funky cafes.

A cross between lego land and the natural history museum, History Land shows models of famous Polish battles and historic events. There’s also a huge lego room where they can create their own cities.

No explanation needed for this!

A kids’ paradise with zip-lines and obstacle courses with rope bridges and swings.  There’s also trampolining.

The Salt Mines of Wieliczka

The mines were listed by UNESCO as a world heritage site in 1978. They’re unusual to see and certainly the only salt mines we’ve seen in Europe.

Auschwithz Birkenau was the biggest Nazi concentration camp. More than a million people lost their lives there. The guided tour is roughly 4 hours but is not recommended for kids under 14.

Jordan park is right next to Blonia commons. There’s a lake with canoes and paddleboats for rent and a small train that tours the park. A wooden castle play-park and loads of hiking and biking trails too.

This is one of the largest indoor water parks in Poland, offering slides, a rapid river and a dedicated children’s paddling pool. The water is heated to 29 degrees!

Other Things To Do In Krakow With Kids

Ideas On Where To Stay

We stayed just outside the Barbican in the Aparthotel Basztowa with our three kids who were 6, 7 and 12. However, there are plenty of gorgeous AirBNB’s in the area too.

You can use this image to Pin this post on Krakow. Check out our pins too. 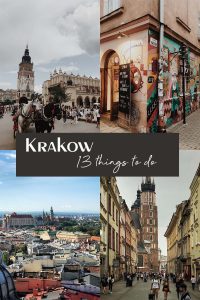 Spread the love
2
Shares
2
Shares
Posted in Poland
« 10 Things To Do On Moreton Island With Kids
Things To Do In Stavanger With Kids. Street Art, Museums & More »