Battambang with kids? Here’s what to do

Just a short distance from Siem Reap, Battambang looks and feels like a country town, and it’s often overlooked by many travellers, however it is Cambodia’s second largest city and there’s plenty to do.  The city sits on the Sangkae River in the north west of Cambodia and has built up a reputation for having grand colonial architecture, colourful temples, robed monks and pretty pagonas. 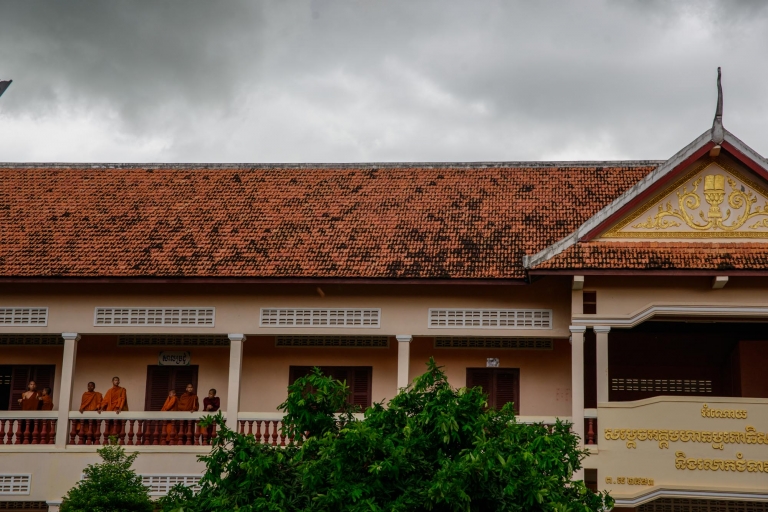 One of the first things to do in Battambang is to check out the architecture. Cambodia was a French colony however there are also influences from the Chinese who arrived in the 20th century and modernist examples from new Khmer architecture.

Go early in the morning or later in the afternoon otherwise the heat might become unbearable. The humidity and the heat, especially in the rainy season can be harsh to deal with. Always take enough water!

DIY: If you want to walk alone, you can download this free heritage walking trail map produced by Khmer Architecture tours. They list over 30 buildings to visit in the area.

Bike tours: If you fancy a bike ride through the town (as well as some time on the river), Battambang Bikes offers an art and architecture themed tour. 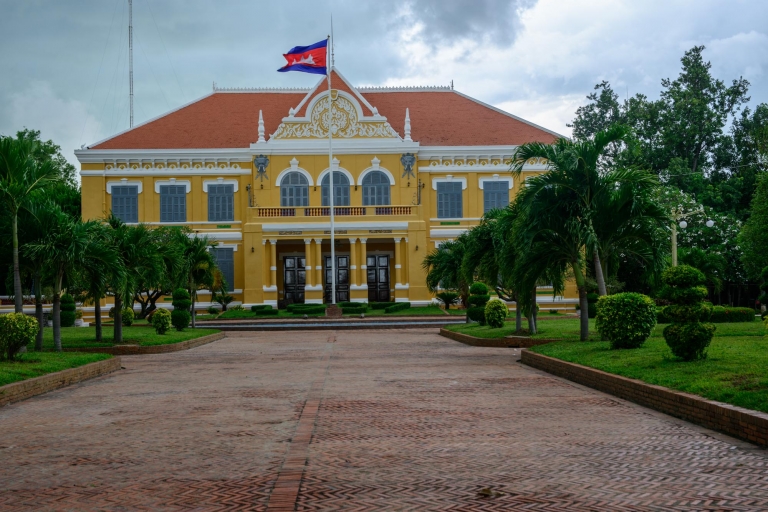 As we visited Phare Circus in Siem Reap we didn’t go in Battambang however it was here the art school and performances were originally founded by returning Cambodians who had sought exile during the war.

Phare Ponleu Selpak (PPSA) or “The Brightness of the Arts” is a non-profit association seeking to improve the lives of children, young adults and their families with art schools, educational programs and social support.

You can arrange a guided tour around their campus or see one of the Battambang circus shows. Campus tours are offered every weekday and the circus performs up to four nights a week, depending on the season. Check the circus schedule as they offer four different performances.

It’s very definitely worth the money in many ways.

Cambodia had some of the greenest countryside I’d ever seen. Rice paddies rolled on for miles/km across the horizon in vivid colour almost too green to believe.

Tuk-tuks are plentiful in Battambang. One that we were offered had plush velour seats and carved wooden handrails whilst another had heavy metal banisters and colourful Cambodian woven material.

The kids said they felt like royalty in the tuk-tuk carriages! 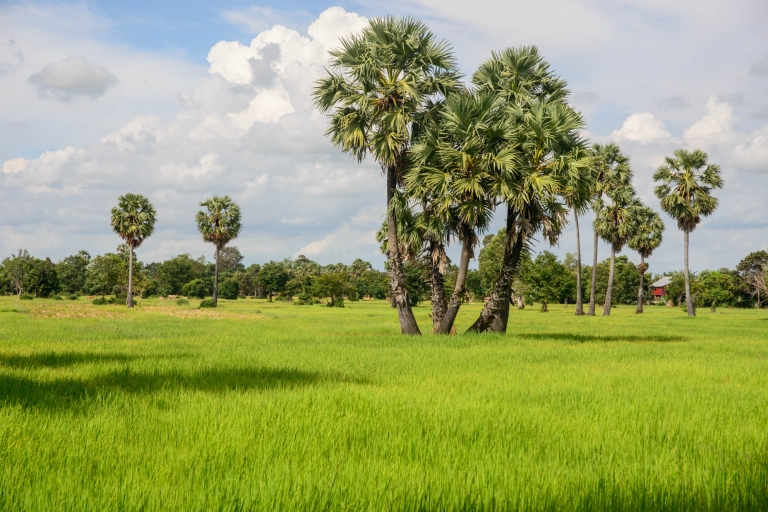 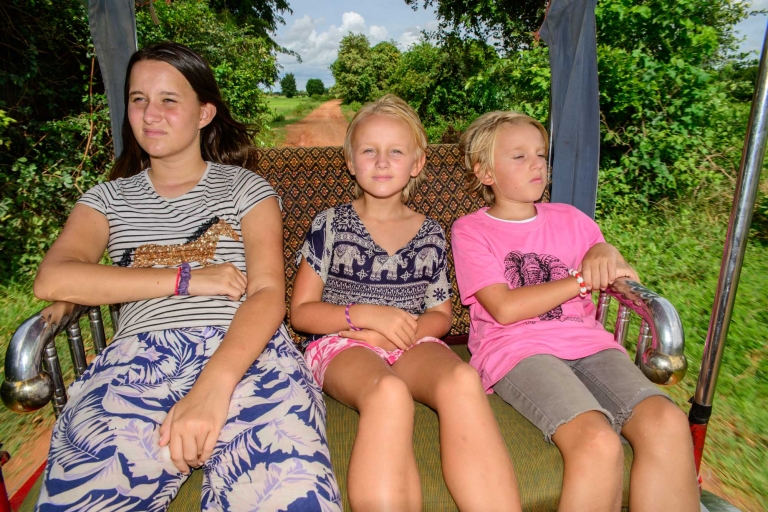 Wat Tahm Rai Saw or the “White Elephant Pagoda” is a modern Buddhist temple which was built in the mid-nineteenth century during the time when the area was ruled by Siam. The main Eastern gate is flanked by near-life sized sculptures of white elephants and is frequently adjourned by orange and burgundy clad monks. 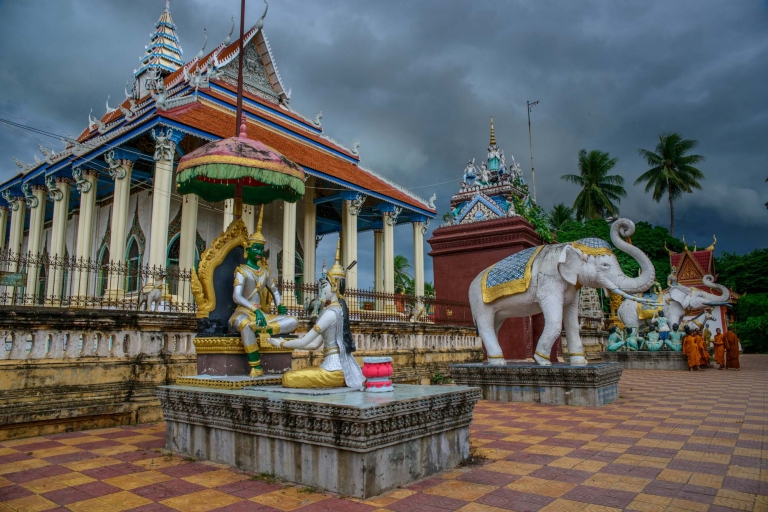 The temple has quite rigid opening hours so ask your accommodation or driver for these. 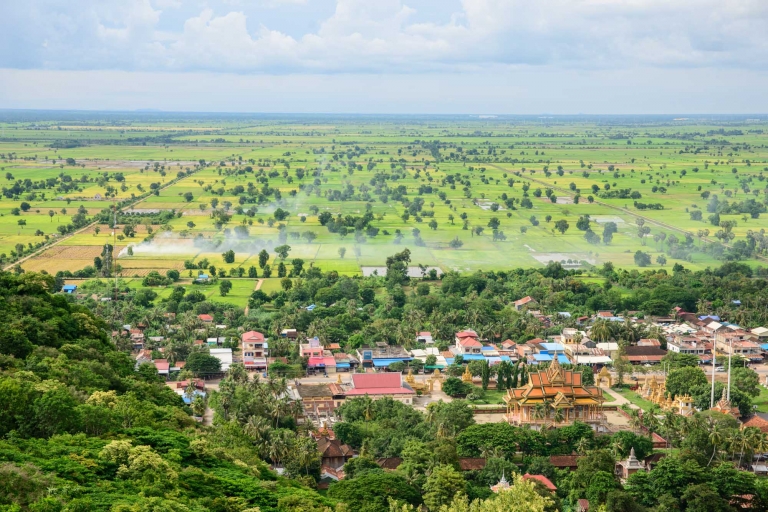 The Giant Buddhas in town are impressive! This one is huge and despite being in the middle of a busy roundabout, it has constant visitors. People pull up and park, get out and give their blessings to Buddha. 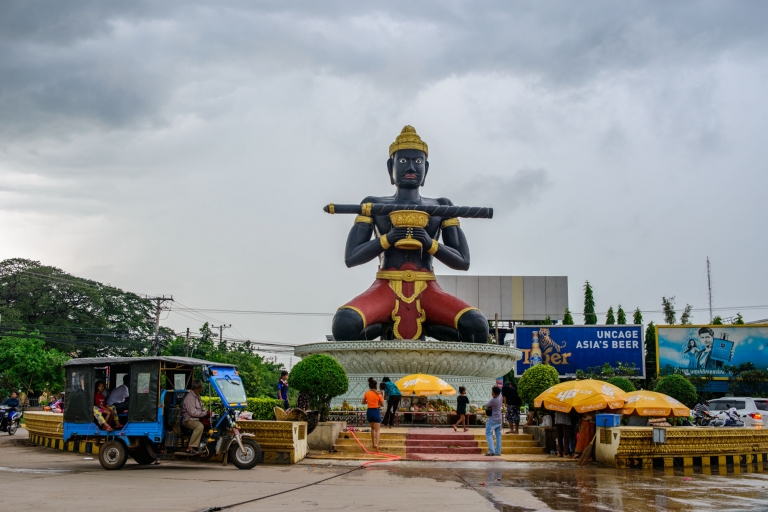 Close to the Pagoda of Kampong Pil Pagoda is the swing bridge of Plov Thmey. It was donated by Switzerland and in order to cross it, you’ll need to walk and watch the tuk-tuk follow behind you.

The kids thought it was fun and we were able to watch a man fishing from a boat and ox wading in the water. 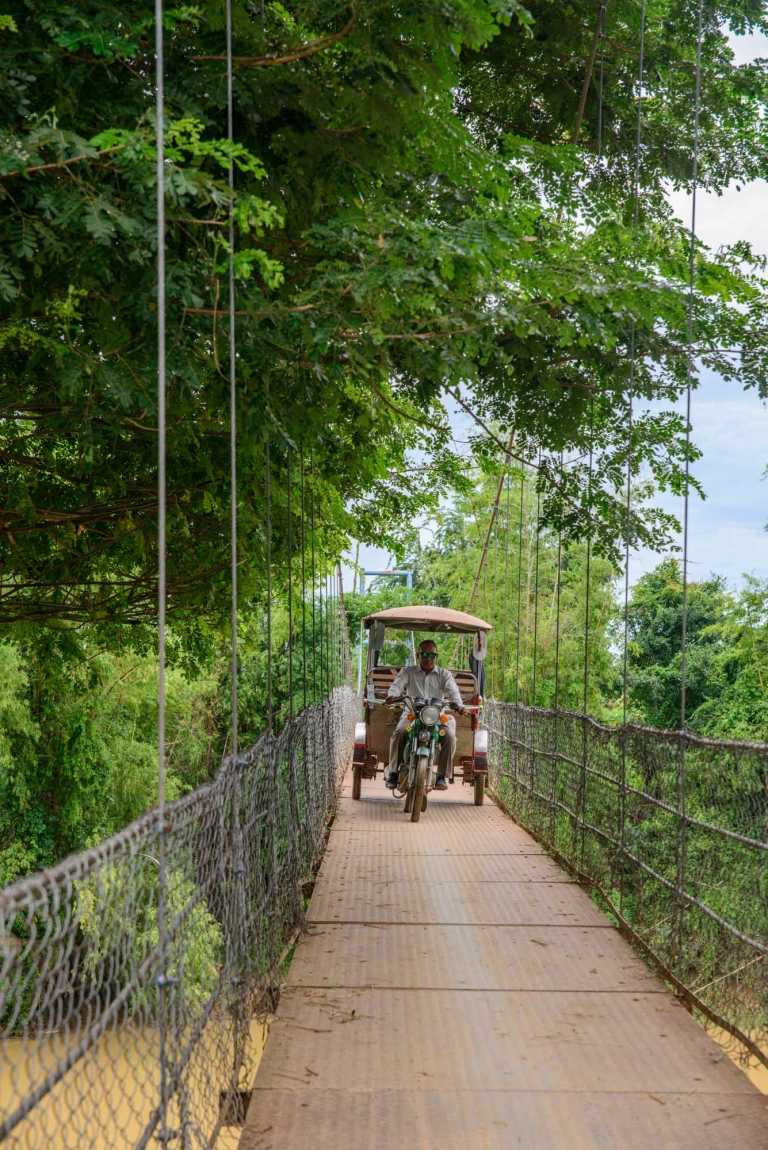 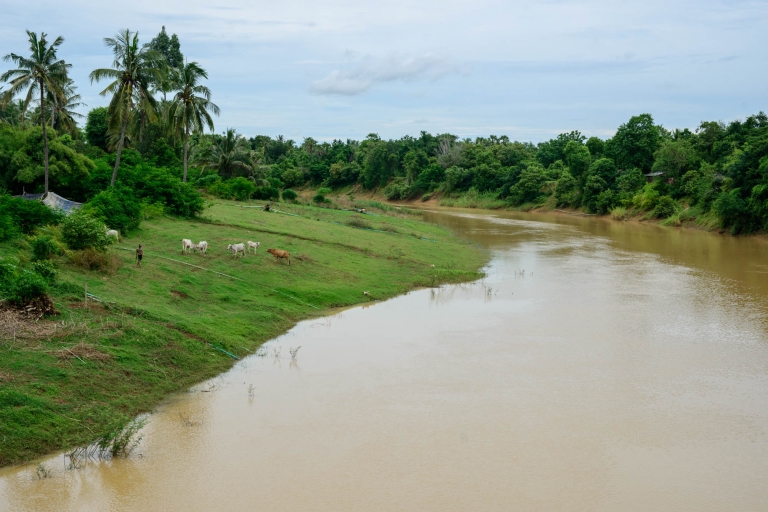 Wat Kor Cultural Village is the “homeland” for many Khmer traditional houses, most of them built from 1920 – 1056 during the French colonial era.

In 2005, the NGO project Asia RUB III Project began preserving the Wat Kor Commune. The attraction being the Khmer traditional, wooden houses and watching the local farmers along the Snagke River.

Like many Cambodian houses, they sit on high wooden stilts because much of the land floods during the rainy season. 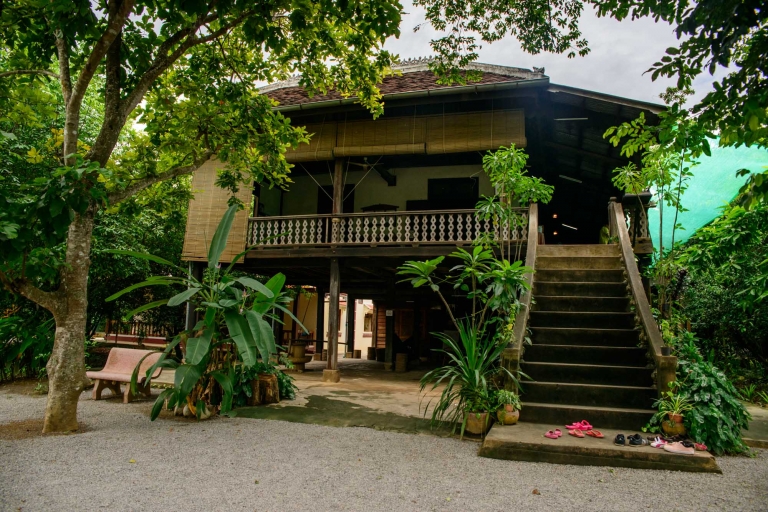 Have a tour inside Khor Sang House which is one of the surviving traditional Khmer houses in Wat Kor village. Decorated with old furniture, family photos and old school certificates, the house was built in 1907 by the owner’s grandfather, who served as a secretary to the province’s last Thai governor. The rear section of the house dates from 1890. 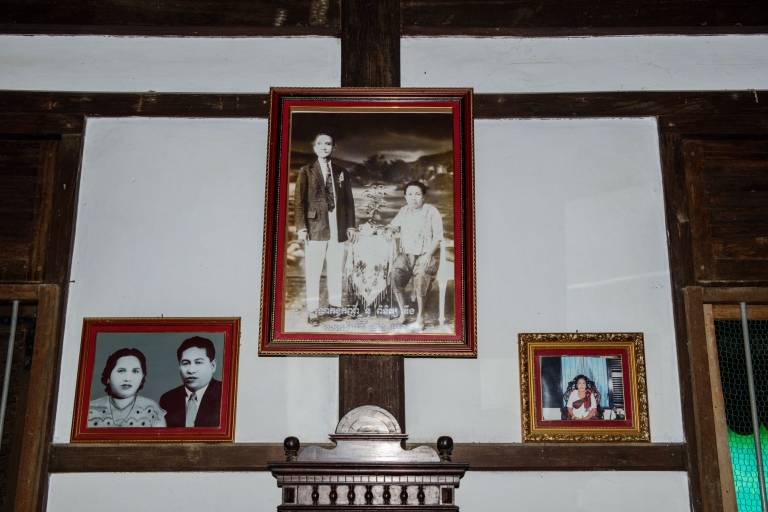 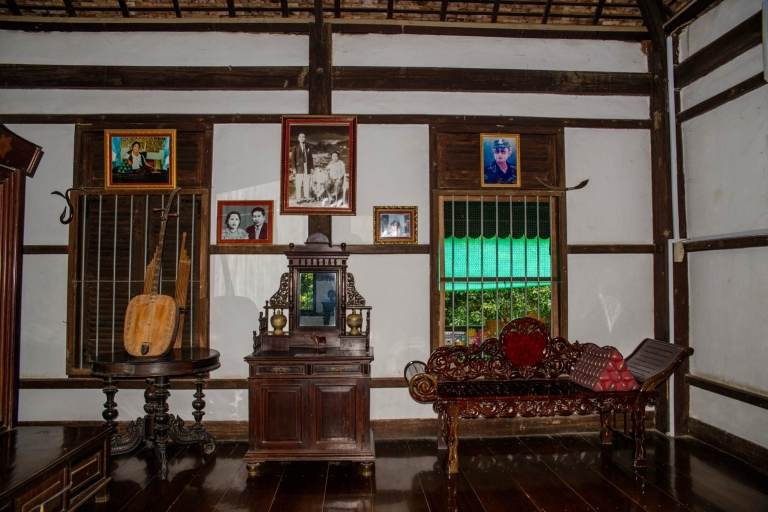 You can visit a local, organic fruit farm and taste many of the locally grown fruit straight from the tree. 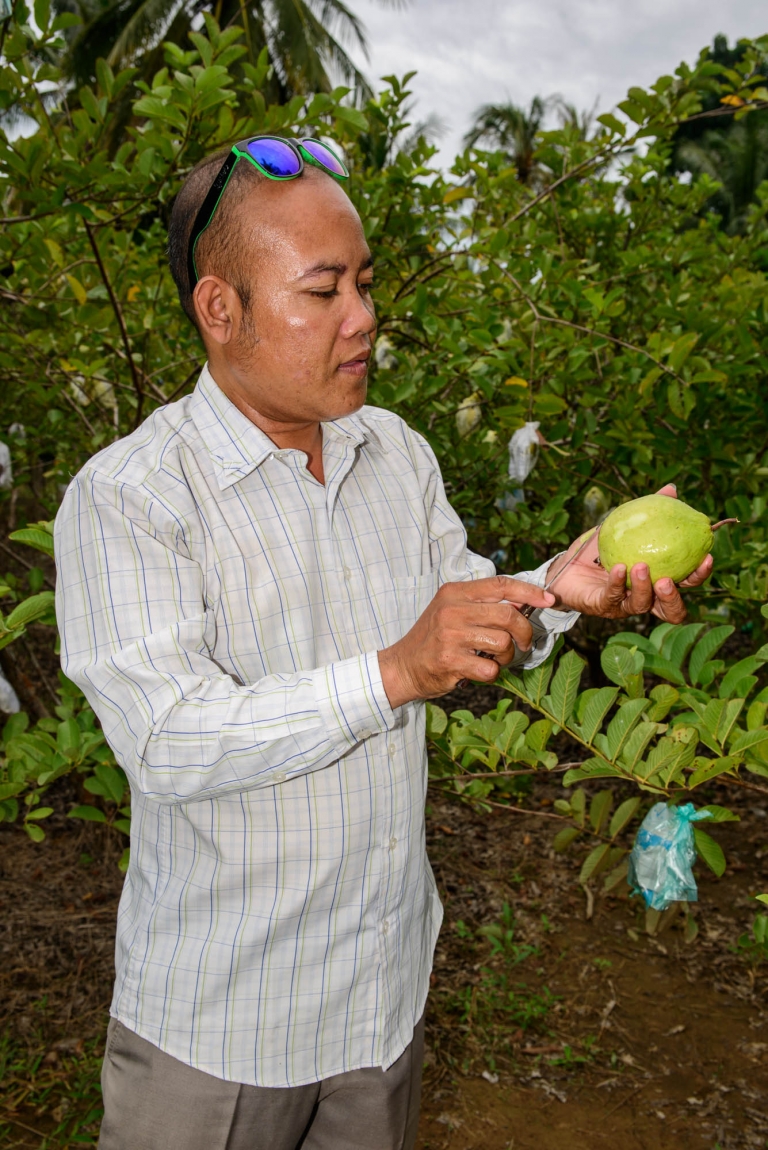 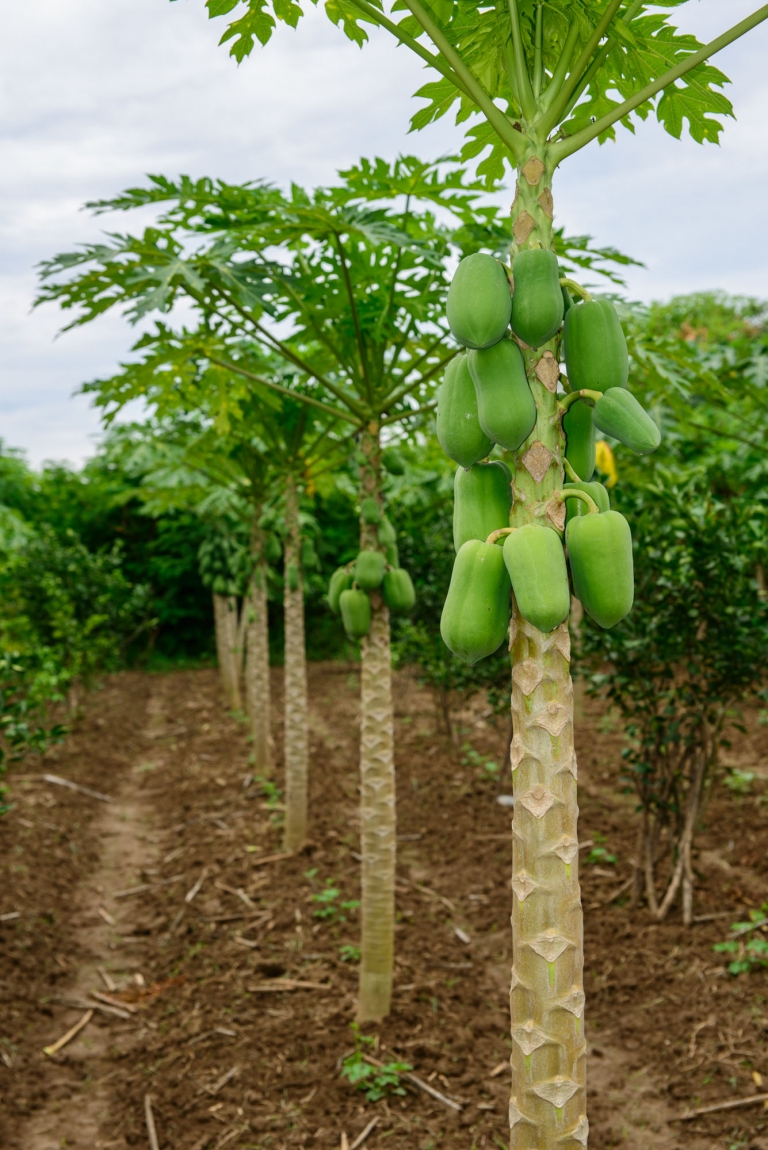 Avoid pub street and head to a road side stall where you can buy rice cooked in bamboo over bbq heat. Some rices are mixed with beans and coconut cream and taste delicious. 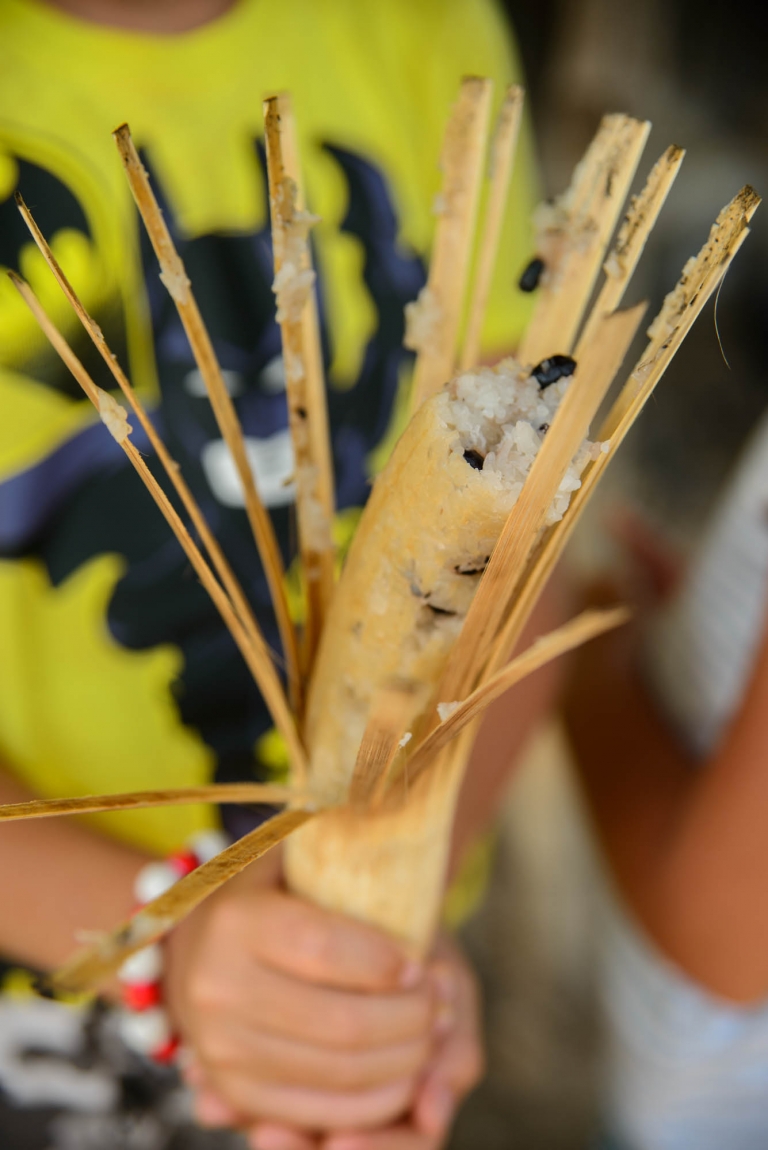 Battambang restaurant Smokin’ Pot runs three hour classes every morning, kicking off with a trip to the local market and finishing with a hard-earned lunch.

Head chef and owner, Vannak, will teach you how to make dishes like bamboo-leaf-infused amok and loc lac.

If you don’t want to learn how to cook, you could always eat here in the evening. 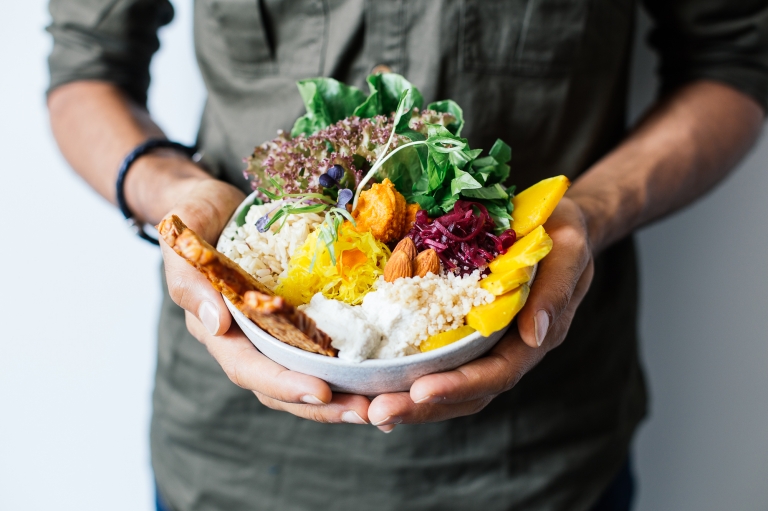 The bamboo train was our kids favourite part of their visit to Battambang. It was recently relocated to Wat Banan so you could visit both on the same day.

Udayadityavarman II built Prasat Banan in the 11th century. There are five temple-towers and impressive carved lintels above the doorways to each of the towers and bas-reliefs on the upper parts of the central tower. 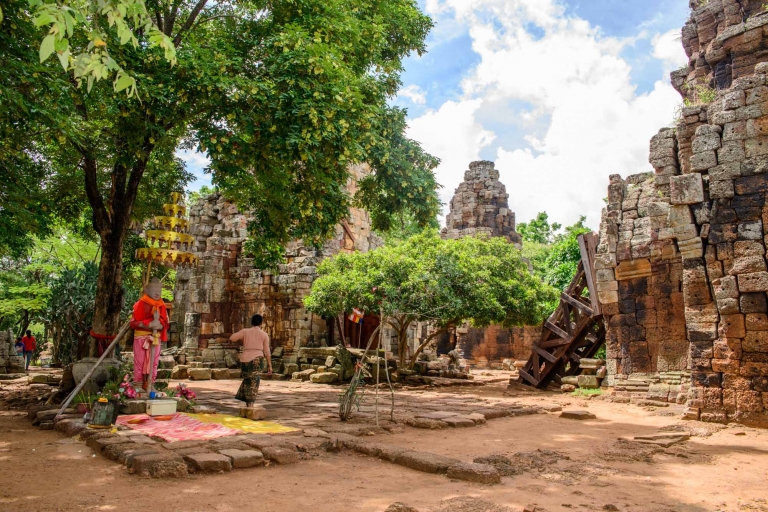 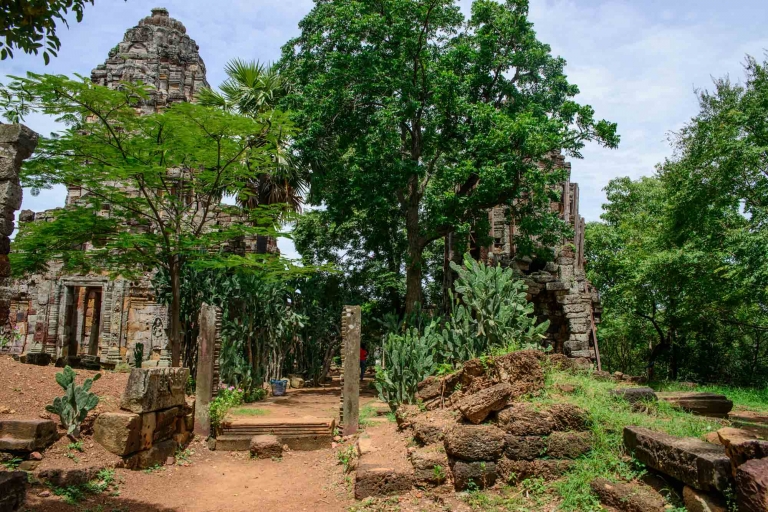 Hidden behind a ginormous statue of Buddha is a partial 11th century temple.

The Khmer Rouge attempted but failed to destroy this temple, which also has some detailed carvings and a delightful pagoda decorated with colourful murals.

You can also have your fortune read at the foot of the temple by a local man. 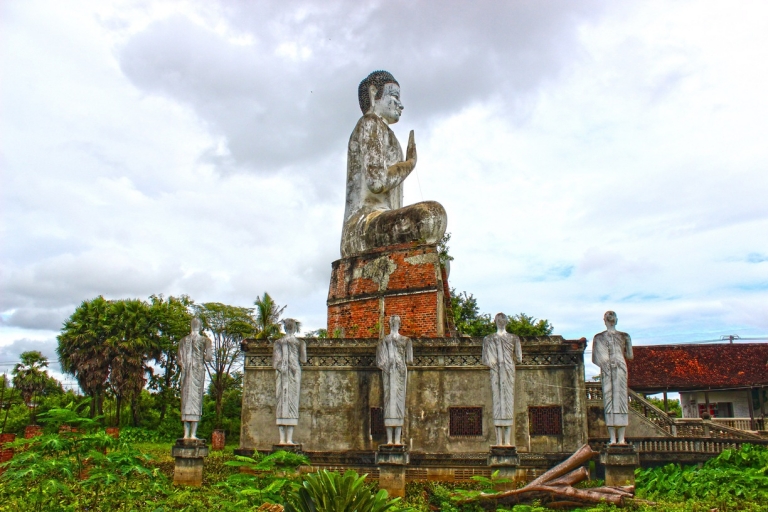 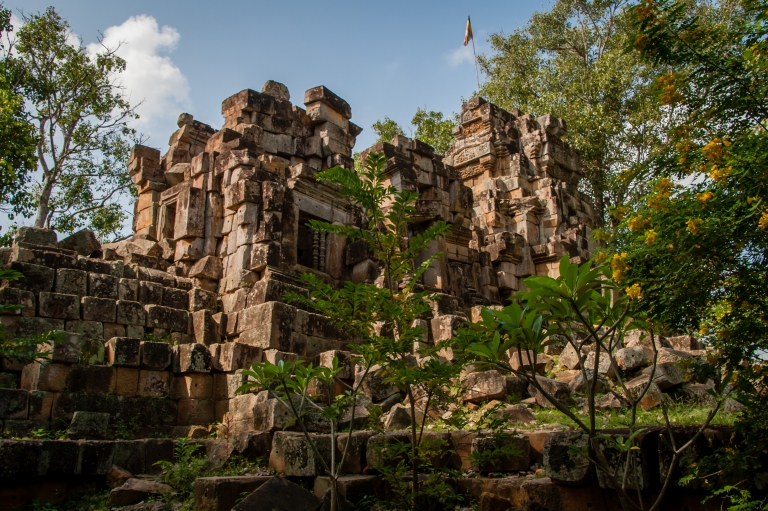 The gold Buddha in the cave

Cambodia has a troubled past which still greatly affects it now. Sampov mountain is a place of quiet reflection with excellent views across the valley of Battambang.

Killing Caves of Phnom Sampov You’ll descend into the green cave by staircase where you’ll see a golden reclining Buddha lying peacefully next to a glass memorial filled with bones and skulls. These are the remains of the people who died at the hands of the Khmer Rouge by being thrown through the skylight above.  It’s a bit gruesome but it was an important message for our kids to see and learn about.

There seem to be lots of different spellings for this place. So far I’ve seen Sampeau, Sampov and Sampow. 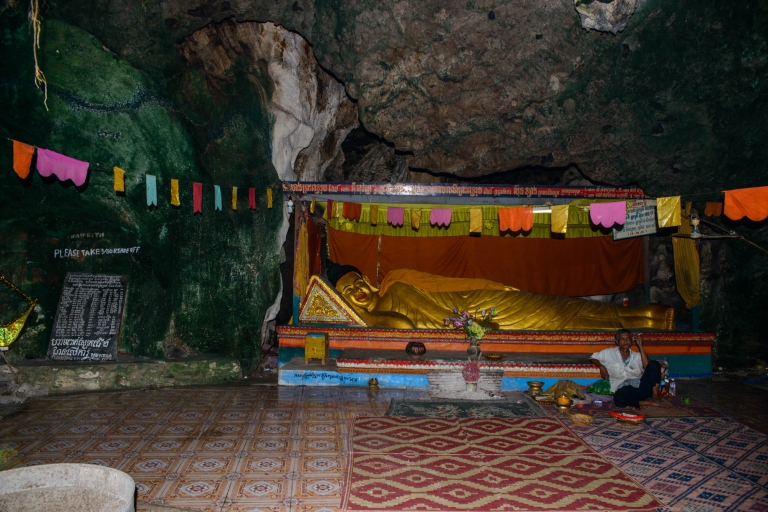 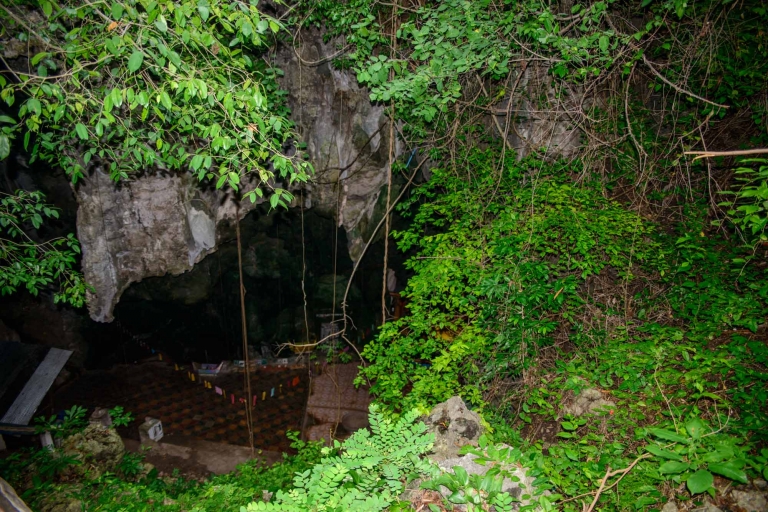 Wat Phnom Sampov temple is a beautifully decorated temple complex that perches atop the mountain. It has historical significance to Cambodian culture that details folklore concerning Crocodile Mountain which you can see from here.  You can learn about the legend of Sampov here.

The surrounding temple areas are home to a bunch of macaque monkeys as well as a beautifully illustrated pagoda. 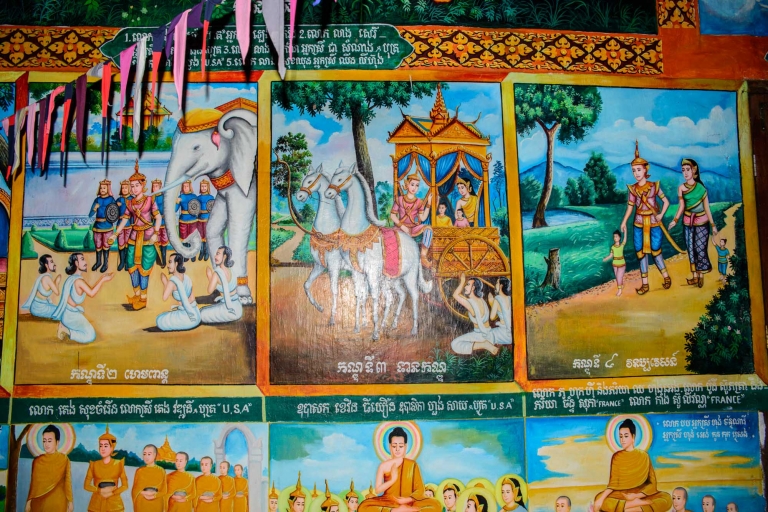 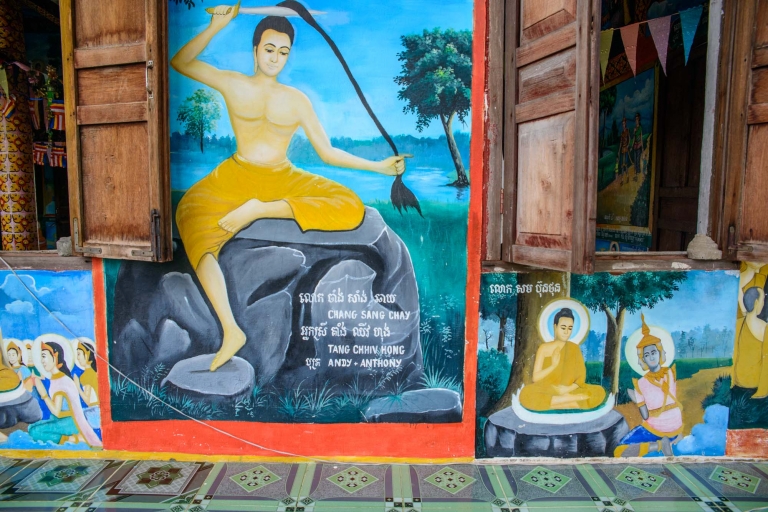 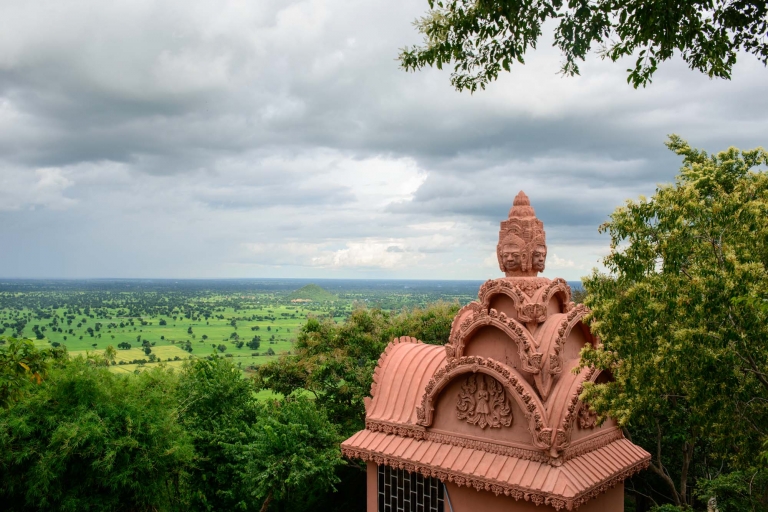 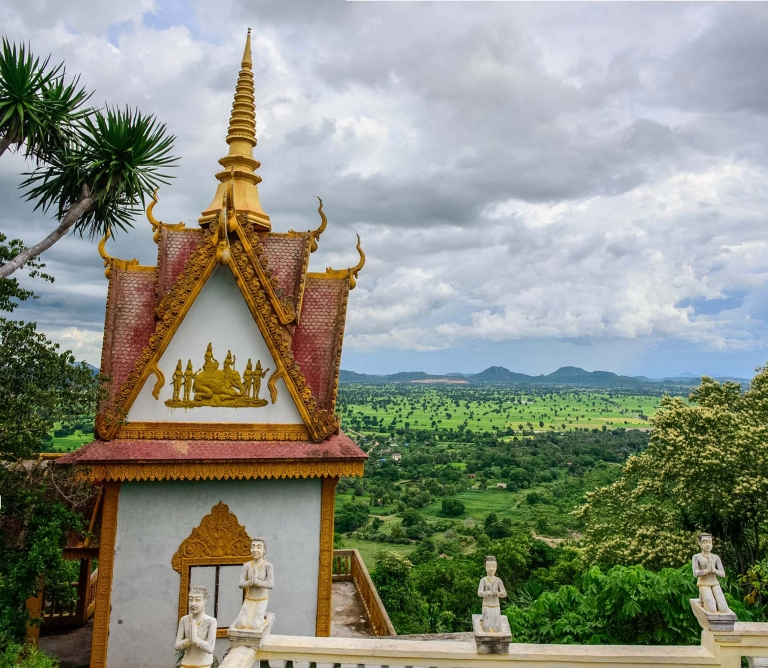 Battambang is definitely worth visiting with kids. We had a really good time staying there and felt that we’d been able to see and learn more of Cambodia’s culture.

What else can you do in Cambodia?