West of Funchal, past Câmara de Lobos and climbing high up into the mountains you’ll arrive at Cabo Girao. At 589 meters it is Europe’s highest cliff face, skywalk and the second highest cliff face in the world after the Grand Canyon. It is also one of Madeira’s busiest tourist attractions. 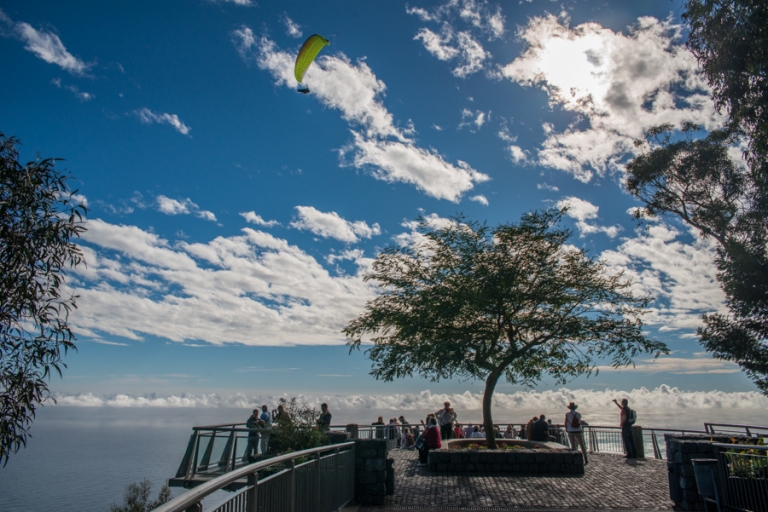 Cabo Girao on a quiet day

How To Get There & Where To Park

There are a number of ways you can get to Cabo Girao; hike through the pathways; coach; taxi or car. We arrived in a car – in winter (January 2017).

Taking the ‘expresso’ from Funchal to Cabo Girao is the easiest option and still gives you some exciting views over Madeira.  Cabo Girao is well sign posted and leaving the expresso, you climb high up into the mountains on narrow and twisty roads that circle the mountainside.

Cabo Girao isn’t at the top of the mountain, that space is for a run down catholic church, however you cannot fail to miss the parking which is full of coaches.

Given just how many people visit this place, I understand it can be nearly two thousand per day in the summer, the parking is quite limited. The area is residential which must be so infuriating for the residents as the quality of parking isn’t always great. If you go be mindful of how you park.


The Complex Of Cabo Girao

Within the complex are a few shops, a cafe, some toilets and various places to sit as well as the glass skywalk and lookout point.

The toilets charge 50c CASH. There are no cash machines at the complex

The cafe is very reasonably priced and we ate three sandwiches and some drinks for 16 euros. There is no vegan option but there are vegetarian choices. 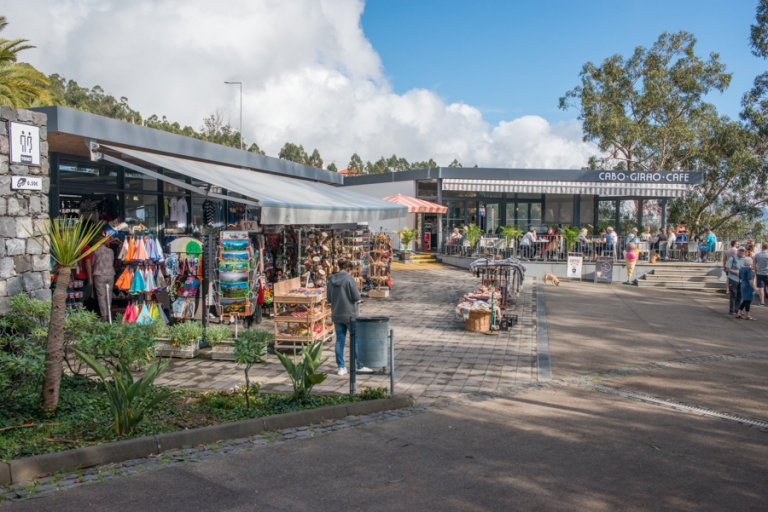 The complex at Cabo Girao

Like many European places, Madeira has a large population of dogs, many of which are stray. Cabo Girao is no exception and seemed to have a resident quad of dogs including two pups. Some people say stay away but these pups seemed friendly, didn’t have any skin conditions and we didn’t feed them. 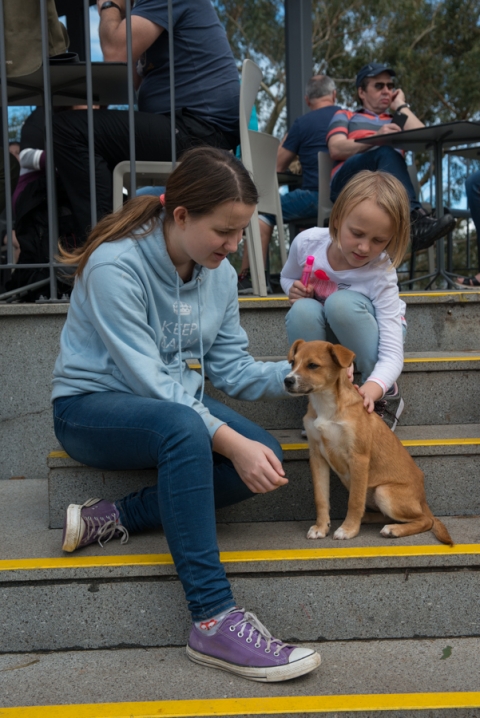 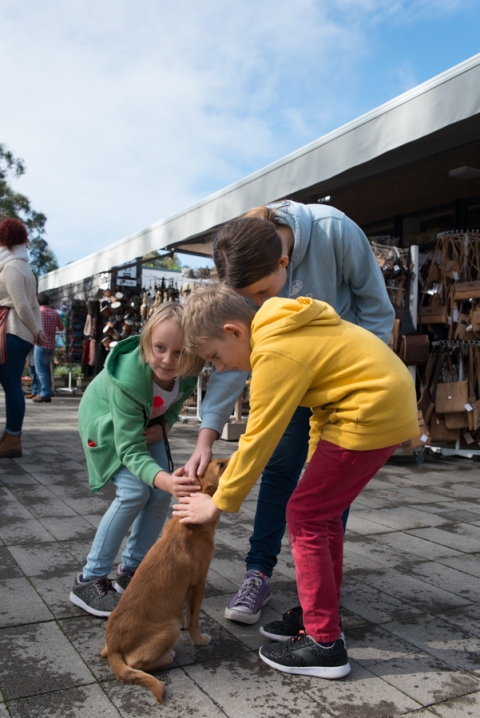 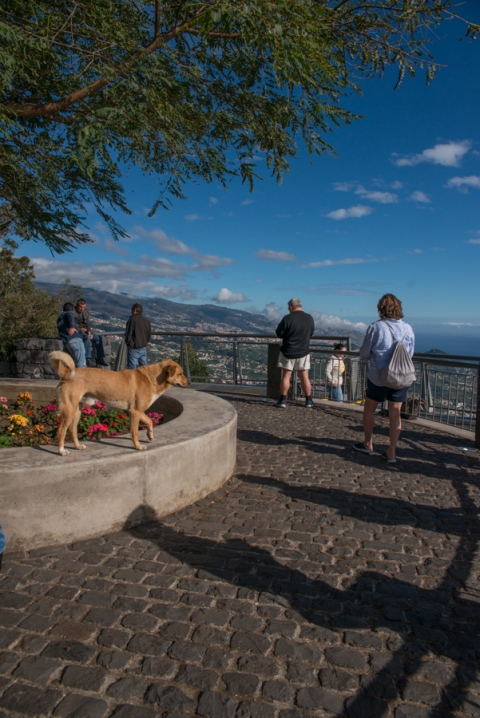 Stray dog wandering around at the skywalk

What Else Can You Do There?

The day we visited, sadly somebody decided their life wasn’t worth living and authorities were removing their body from the cliff face. We were informed of a three hour delay so we decided rather than leave, we would hang around and find other things to do.

Other things to do include:

Walk east around the mountain. You’ll see some impressive houses perched on the edge of the mountain giving unprecedented views down into the valley.

View from the north east of Cabo Girao 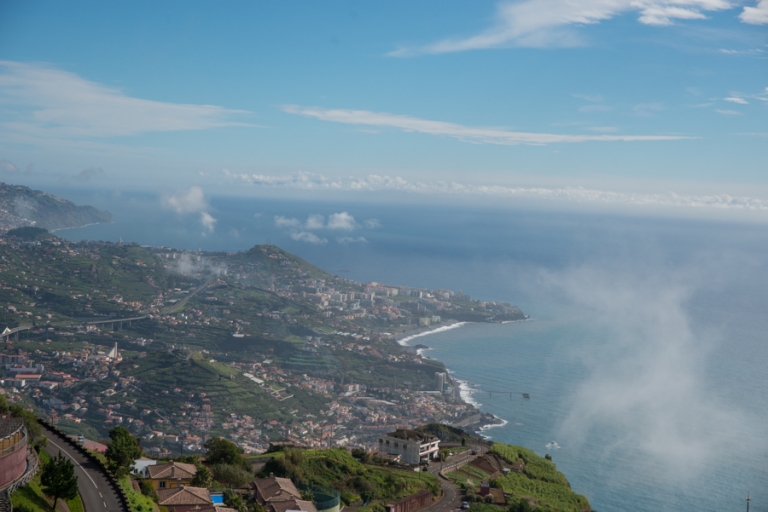 Walk up to see the catholic church; Chapel of Nossa Senhora da Fátima which was built in 1951. I have to say it doesn’t look in the greatest of conditions but it does kill some time. It is supposed to be one of the main pilgrim stops on the island. 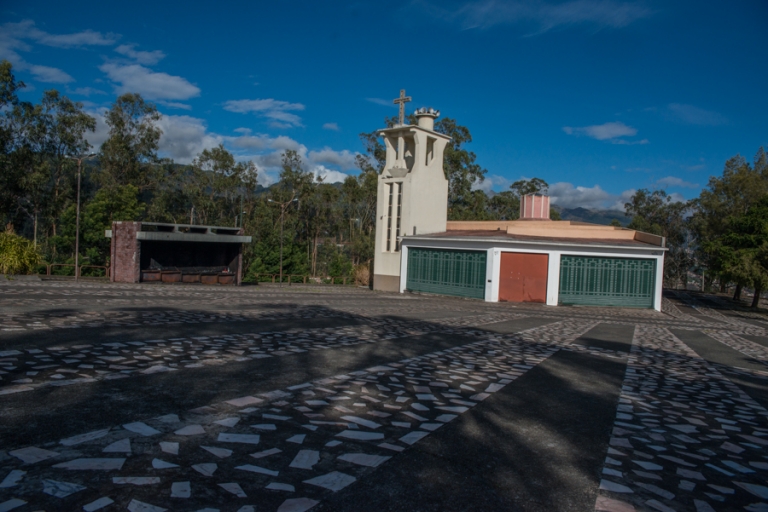 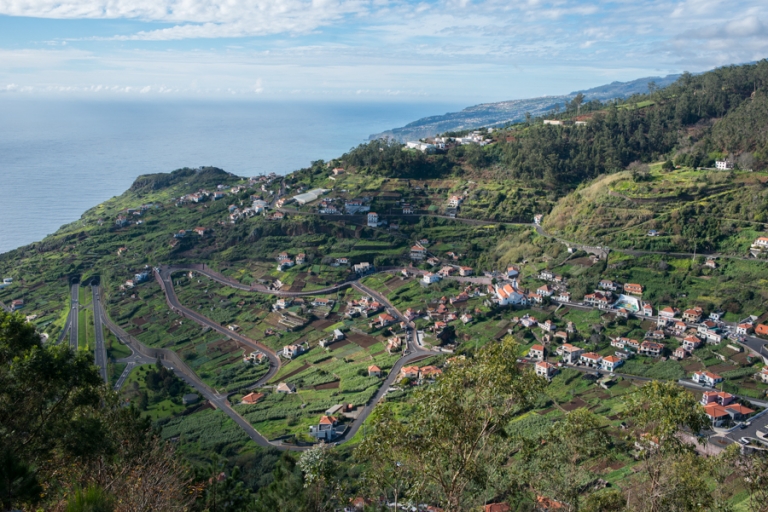 The view from the top of the mountain at Cabo Girao

Walk down to several view points. There are some steep steps at the end of a residential street that give access to more viewing points.

The area is well known for paragliding and base jumping. You’ll see at least one a day. 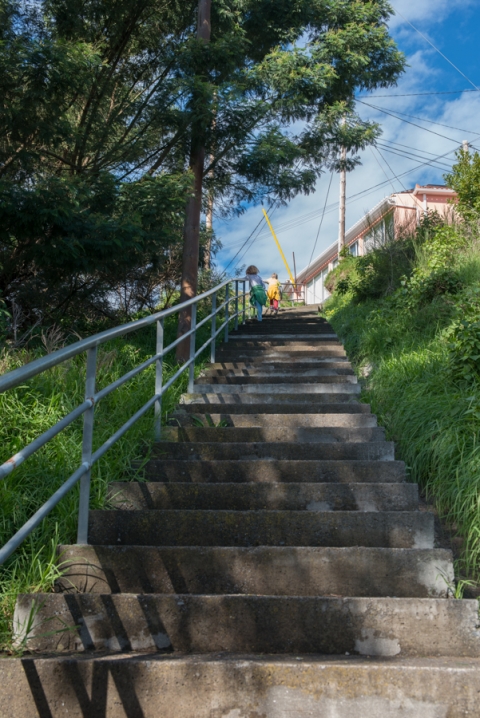 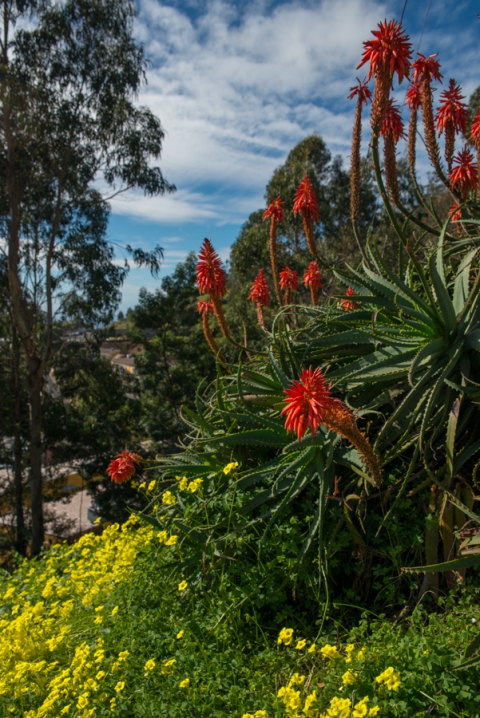 Flower and plants along the way 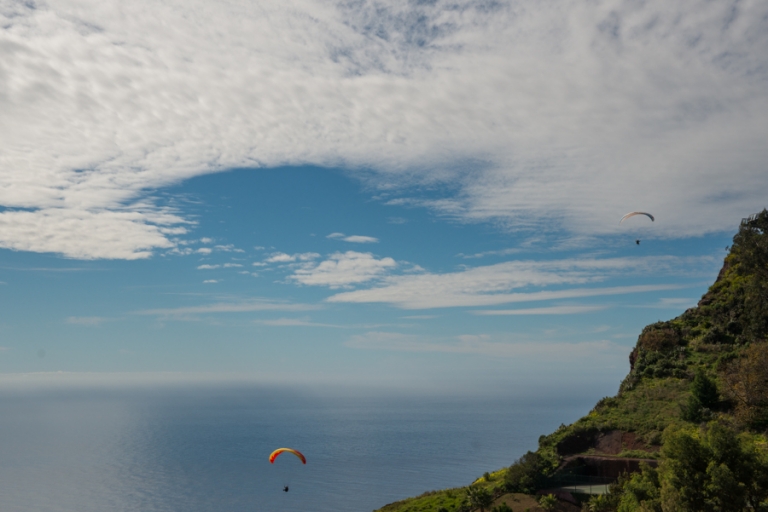 
The Viewing Point From Cabo Girao

I’ll say it now and get it over and done with; I was really disappointed by the size of the platform and the amount of tourists.  It is a free attraction and I guess we should have expected it to be busy but I hadn’t expected it to be so NOISY and worth noting; we visited in January!

I had also forgotten how self absorbed tourists taking selfies could be. I would like to go back but I’d definitely get there for sunrise to avoid the barrage of people. 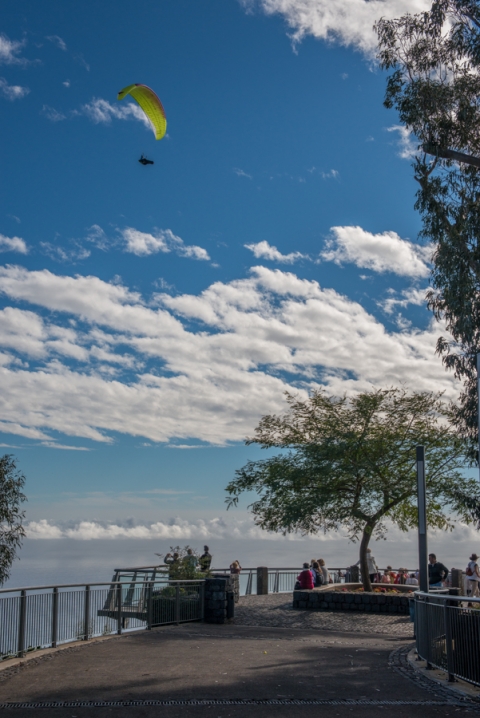 At each end of the viewing platform are metal grid areas. Look below and you can see the bare ground – or the cliff face below with the green terraces. 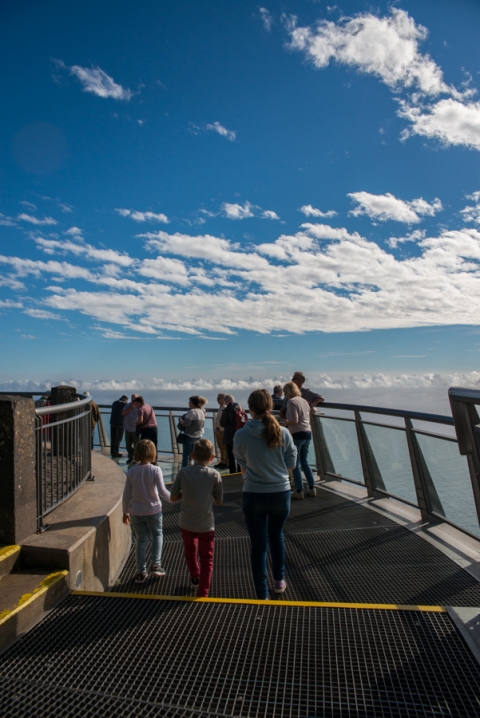 Only the middle section is glass. There were a few people making a big fuss about it but most were happy to walk around on it.  I think because the waves are SUCH a long way down, you’re unable to see it very clearly (mostly because of the mist and clouds) and it doesn’t really effect you. 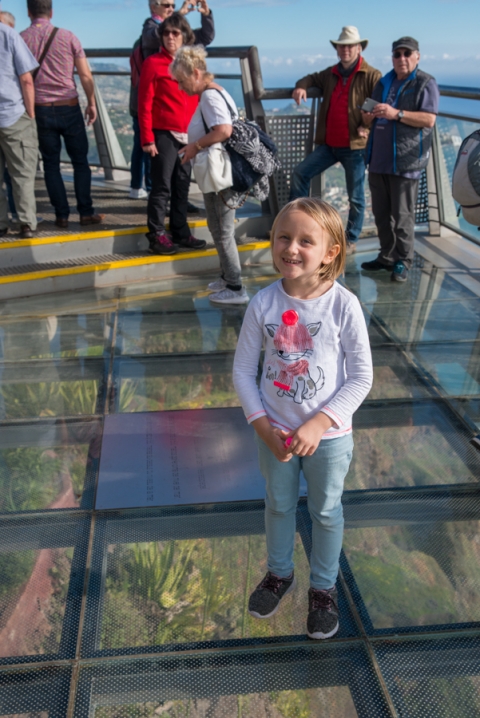 Imogen on the glass skywalk at Cabo Girao 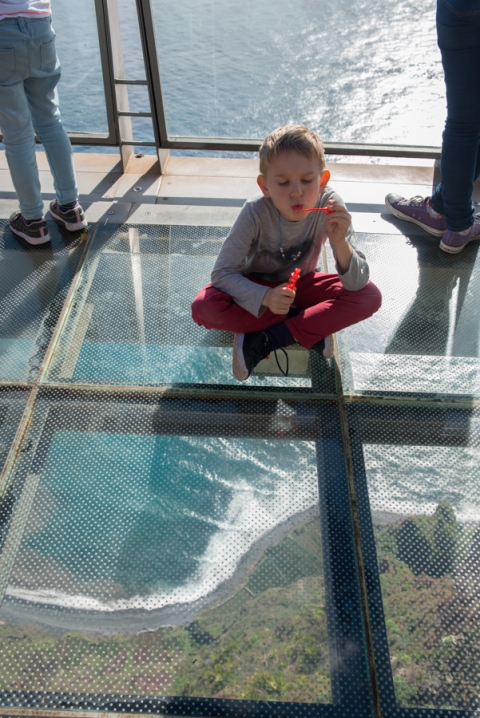 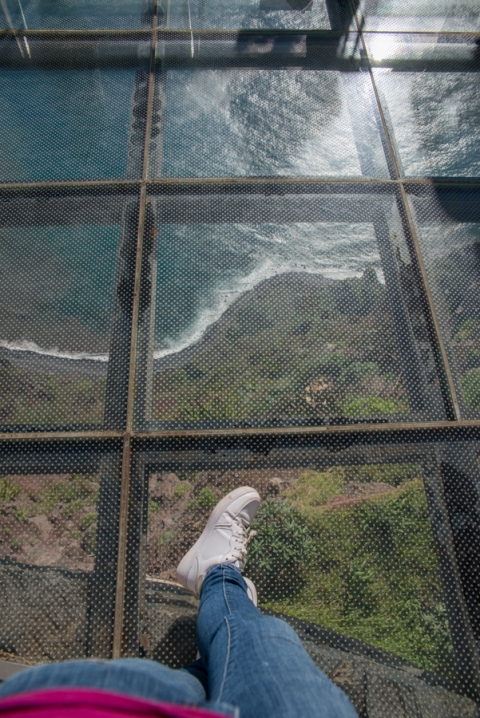 The views across the island are amazing and if you can ignore the noise and hustle and bustle of the tourists then it’s worth it. There is no way I could visit this in the summer months though. 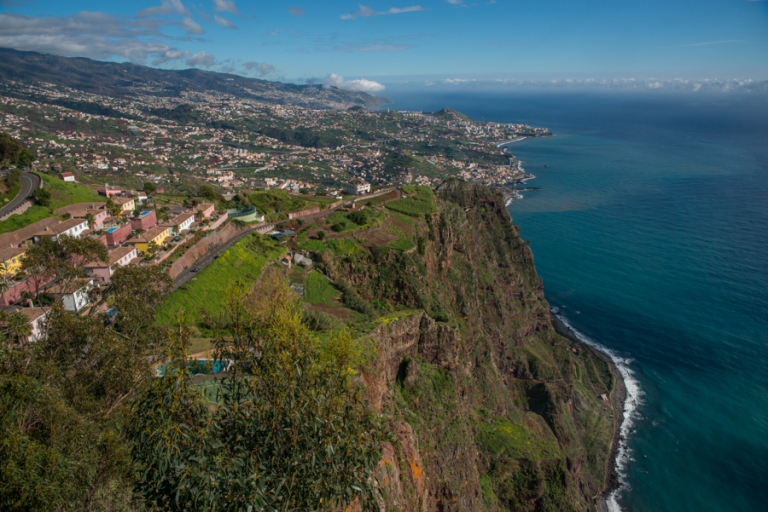 The view from Cabo Girao skywalk 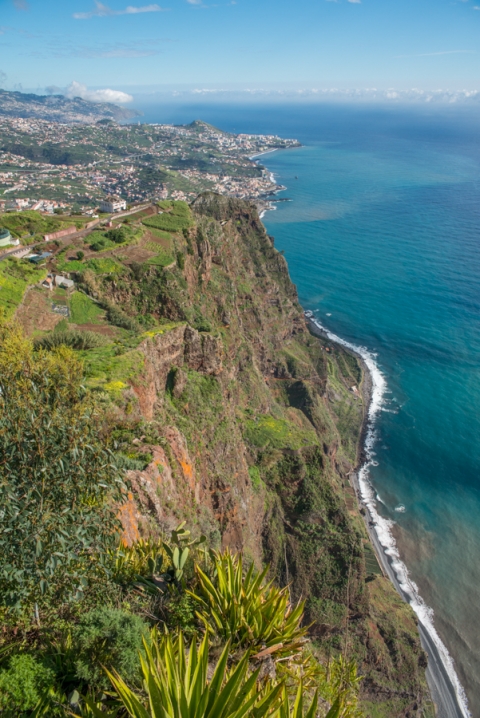 The view of Madeira from Cabo Girao 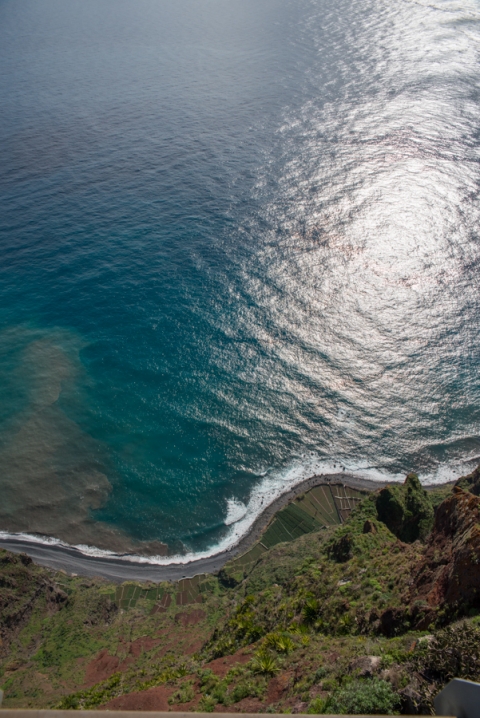 2016 Journey Of A Nomadic Family|ProPhoto Site