We are always on the look out for ways to travel more meaningfully. We like culture, sustainable tourism and genuine encounters with local people. We love to book and use local guides; those people who can give us inside knowledge into what it’s like to really live and work there. If you want to explore Ayutthaya Thailand with a local read on for how to do so. 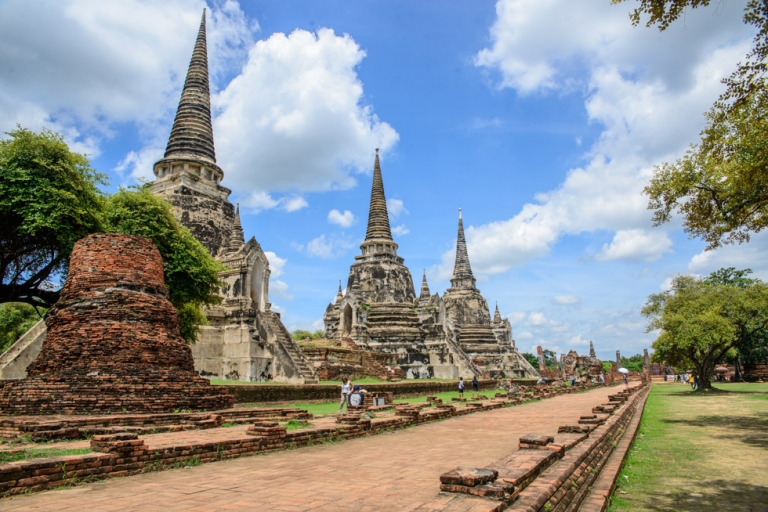 One way to get innovative and try to access local guides is by using phone apps.

Phone apps have the potential to offer more personalised and local experiences but it can also mean that my investment goes directly into local communities and not foreign owned tour agencies. In light of trickle down economics this is something we really want to promote. 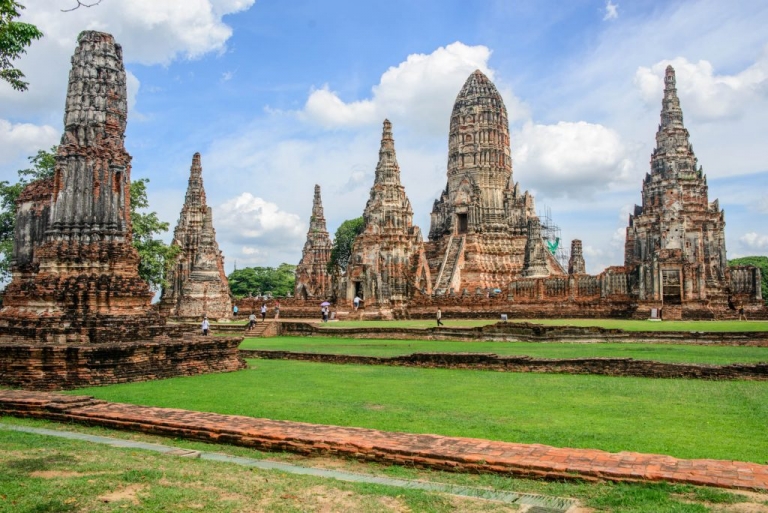 Whilst in Malaysia we used the phone app WithLocals to tour Penang with Deffrey so it was the first app I searched whilst in Bangkok however I was disappointed and could only find coach tours.

Instead, I downloaded GetYourGuide and found a day long, private tour from Bangkok to the ancient city of Ayutthaya for 3,400 baht/£80 for the four of us.

I felt that the price wasn’t too extortionate given that Ayutthaya is approximately an hour north of Bangkok and I though that we would have the opportunity to learn something about Thailand’s history. And we did and the tour was GREAT. 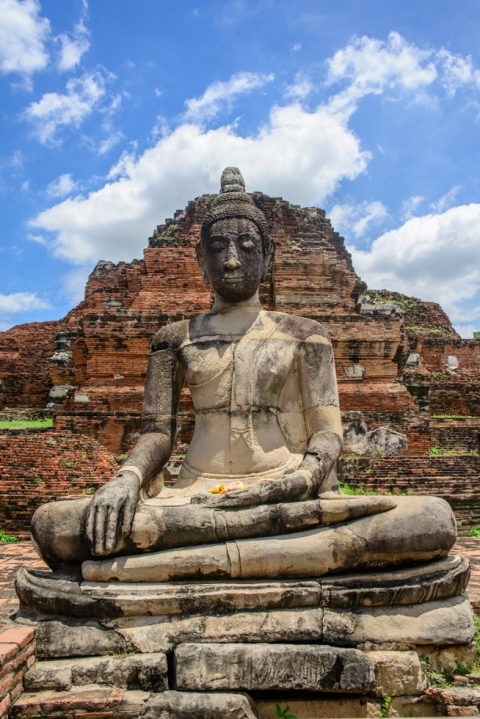 Can I do it cheaper myself?

Yes you can. From Bangkok:

My top tip would be to boycott Bangkok altogether and stay in Ayutthaya for three days. There’s so much to see and do and you would certainly not miss Bangkok. I will add though, the kids and I (Emma) arrived in Bangkok after eleven weeks fast backpacking south east Asia. We were psychically exhausted and the immense noise and traffic in Bangkok was overwhelming. 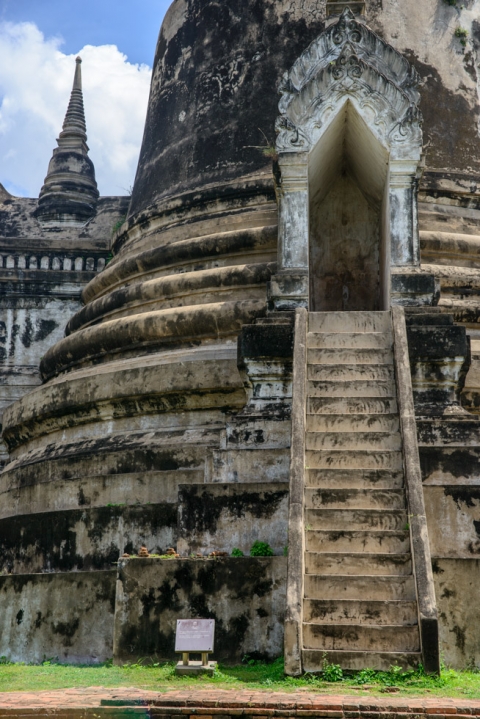 Why should you boycott Bangkok?

Bangkok is hot, sticky, dirty and in our opinion lacks personality, charm or charisma. After you’ve seen the reclining buddha and crossed the river to see the sun temple there’s little else to do. The streets are grimy and noisy with traffic, the malls are tacky and unless you really want to eat ice-cream with purple plastic unicorns you might struggle to entertain yourselves.

Ayutthaya on the other hand is a historic relic to a by gone era of gold, spices, teas and international trading. The bricks lovingly, hand made, stacked with such precision (and symmetry) have remained for seven hundred years! The history behind the beauty is overwhelming and the natural area that surrounds it is peaceful and green. To me this is bliss and I hope it is to you too. 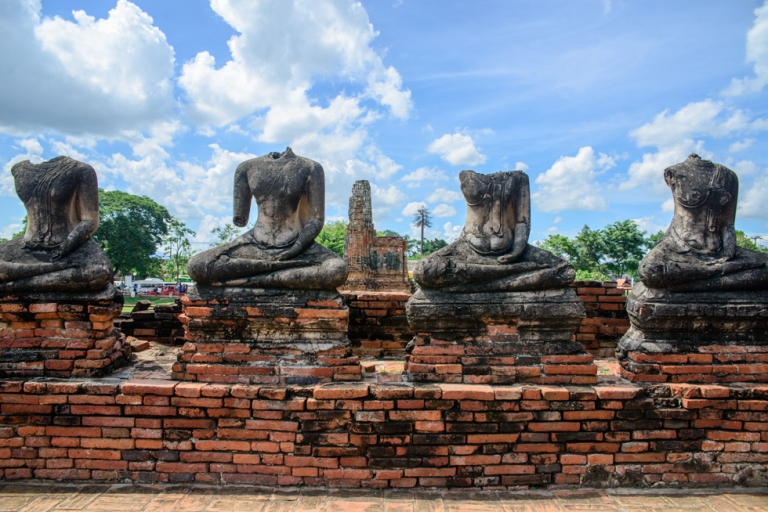 What exactly is Ayutthaya Thailand?

Ayutthaya was the second capital of Siam after Sukhothai and before Bangkok. Having been founded in 1350 by 1700 it became the largest trading city in the world with one million inhabitants. With many European travellers regularly proclaiming it the most beautiful city they’d ever seen, full of palaces draped in gold.

However, the Burmese invaded in 1767 and almost completely burnt the city to the ground.  Only the buildings made of stone survived which left the prang (reliquary towers), monasteries, temples and palaces.

The historic city was recognised in 1991 by UNESCO as a world heritage site. 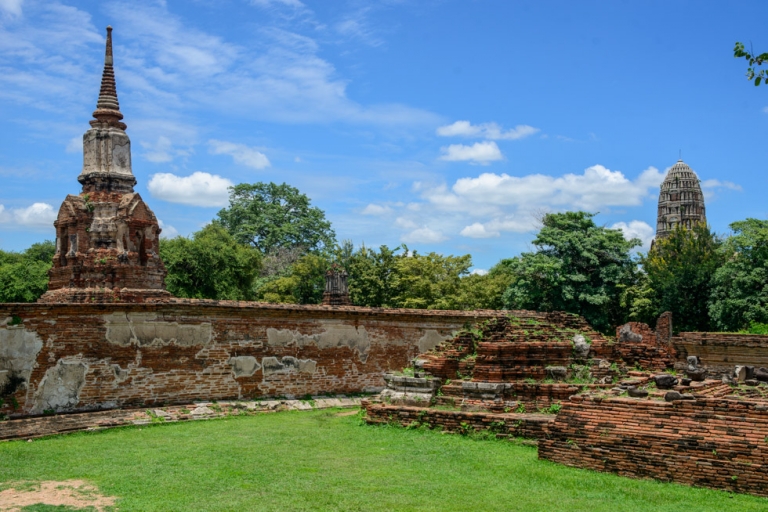 How much does it cost to visit?

The temples with entry charges are usually in ruins.

Each single entry costs between 20-60 baht CASH (no credit card) with the majority of places charging 50 baht for those people over 1.2 metres in height.

All of the tickets are blue and look exactly alike with the only difference being the stamp imprinted on the ticket after purchase.

Working temples tend to charge no fees and although somebody told me that a pass to access six chargeable temples costs 220 Baht, I forgot!  You must ask if you want this ticket as ticket staff won’t offer it. 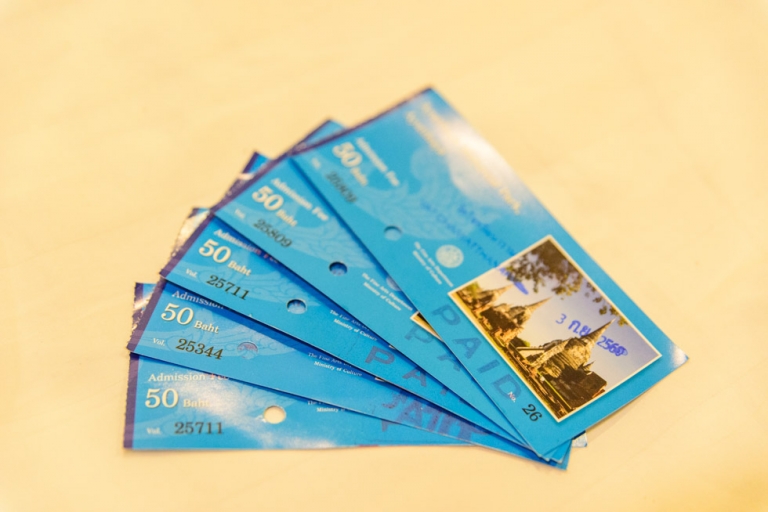 All the tickets looks exactly the same save for the stamp mark. Ayutthaya ancient city.

There is no dress code when visiting Ayutthaya but visitors are requested to respect traditional dress codes. 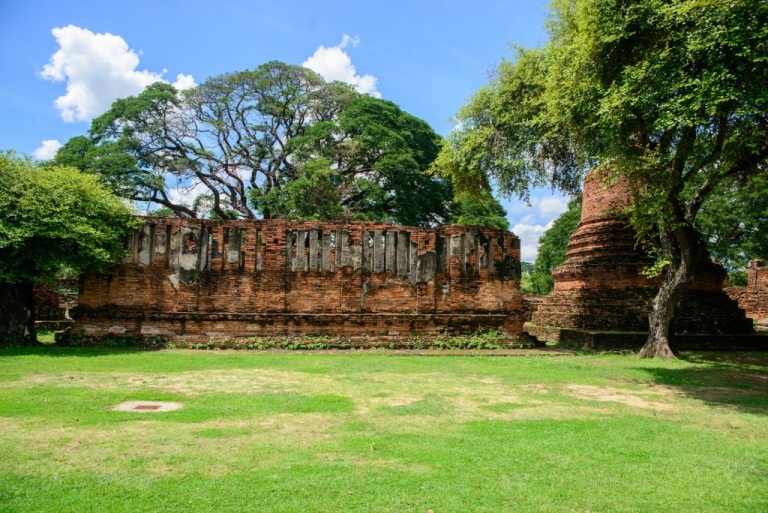 What can you see at the historical park?

The ancient city of Ayutthaya is now known by the name of The Ayutthaya Historical Park which is an island at the confluence of three rivers: the Chao Phraya River, the Lopburi River and the Pa Sak River.

Once upon a time there were three palaces in Ayutthaya: Grand Palace, Chantharakasem Palace and Wang Lang. In addition, there were many other palaces and buildings for royal visits located outside Ayutthaya, such as the palace at Bang Pa-In and Nakhon Luang Building. 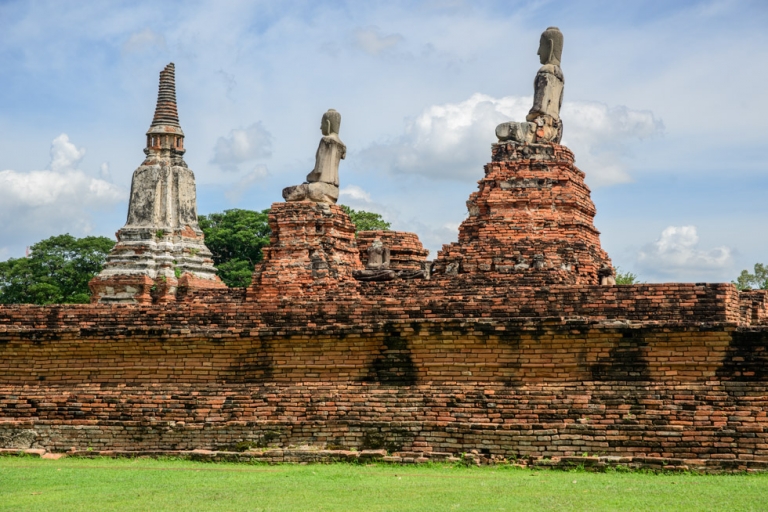 Where to find the best map?

The island comprises one vast stretch of multiple ruined sites which to best understand you need to see on a map.

A free map of the city is widely available in all hotels but it isn’t comprehensive.  A better map is available at the tourist office.

Having only had about five hours to see  Wat Mahathat, Wat Phra Si Sanphet and Wat Chai Wathama Ram, I would definitely suggest you book three days here, rent some bikes and see everything at a more relaxed pace. Ayutthaya’s new city is built around the old city and I am informed they have great night markets and amazing food. I really wish we’d stayed there.

The archaeological park is easily reachable and manageable on bike even if you aren’t very fit. The paths are paved and the distances between temples are negligible.

You can rent a bicycle for 40-50 baht per day. They may ask you to leave a deposit (such as money, driving licence or credit card). Under NO CIRCUMSTANCES should you ever leave your passport! If they insist, negotiate a cash deposit or walk away.

Several rental places are located just before the ferry crossing across the Chao Phraya River and it costs an additional 5 Baht to take your bike across the river.

Before leaving with your bike, you should: 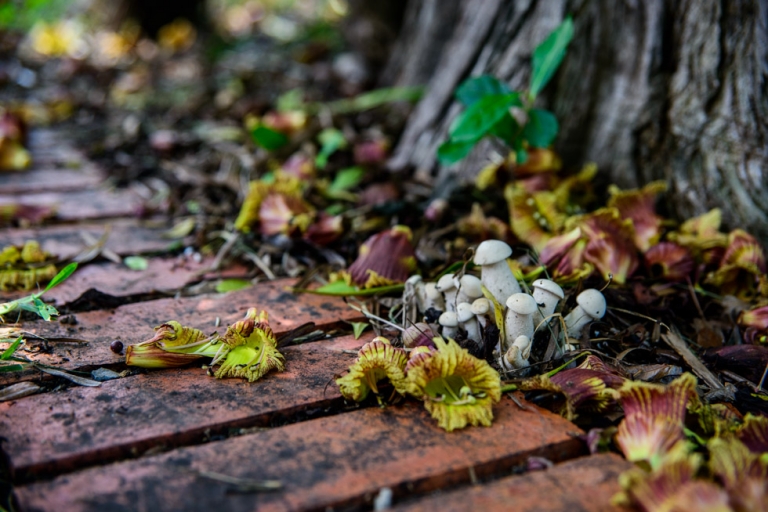 What should you see?

Without a doubt the most important site is  Wat Phra Si Sanphet which holds the three large stupas however the main attraction for Thai visitors is the Phra Mongkhon Bophit which holds one of the largest bronze statues of a sitting Buddha in Thailand. 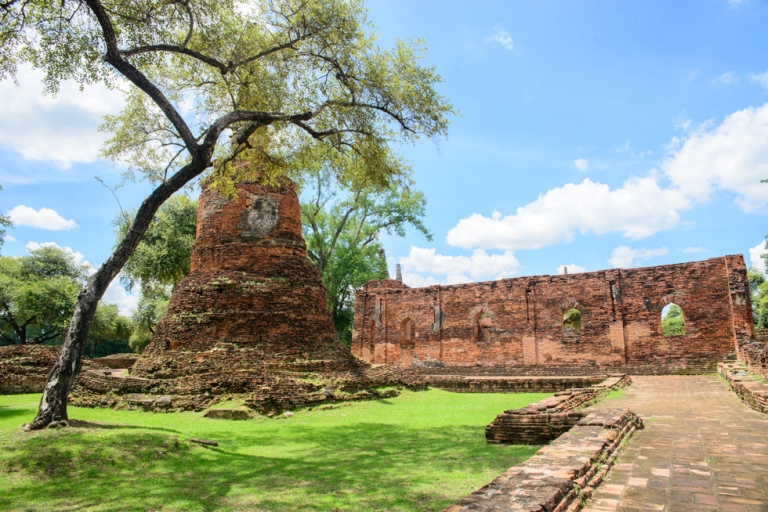 Wat Phra Si Sanphet is the largest temple in Ayutthaya. It was once used for royal religious ceremonies and contained the ashes of the royal family members. It also held a 52ft/16m Buddha (cast in 1500) covered with 340kg of gold however looting Burmese invaders set fire to the statue (1767) to melt the gold and destroyed the temple in the process.

It is now known for its distinctive row of restored chedis (Thai-style stupas with a more rounded appearance) which are the poster images for the city. 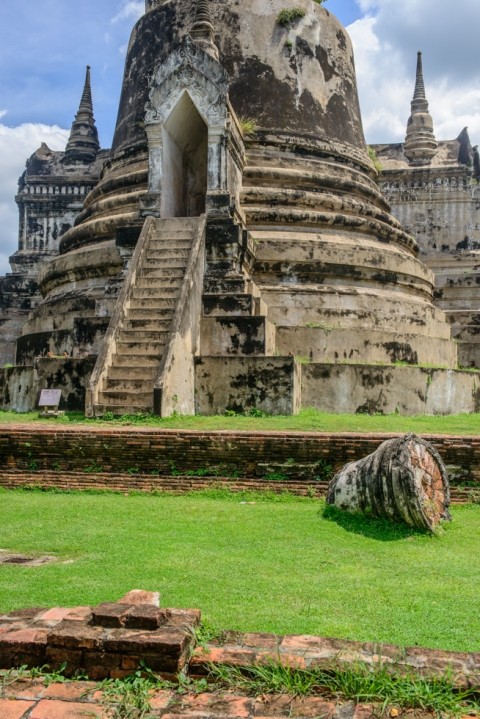 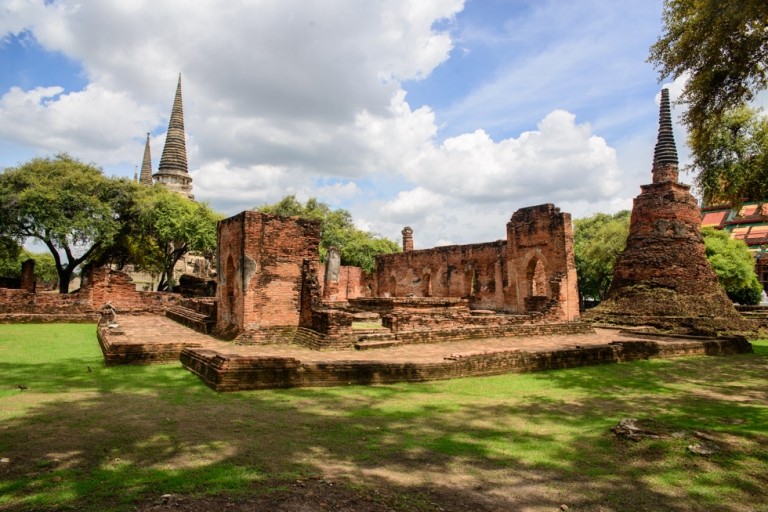 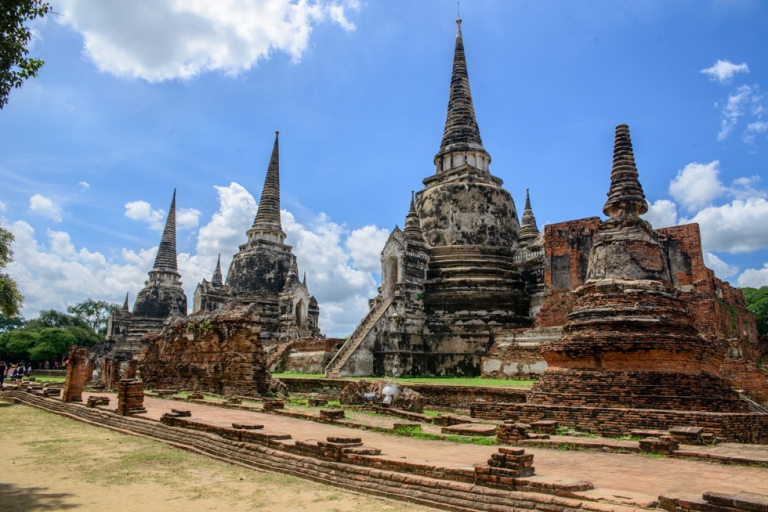 It is one of Ayutthaya’s best known temples and was constructed in 1630 as a memorial to the King’s mother. The temple’s name means the Temple of long reign and glorious era.

The temple sits on a rectangular platform and has a 35m prang in the centre and four smaller prangs. It is surrounded by eight chedi chapels which are connected by a rectangular cross-shaped passage (Phra Rabieng). The passage had numerous side entries and was originally roofed and open inwards but today only the foundations of the pillars and the outside wall still stand. Along the wall, there were 120 sitting Buddha statues. 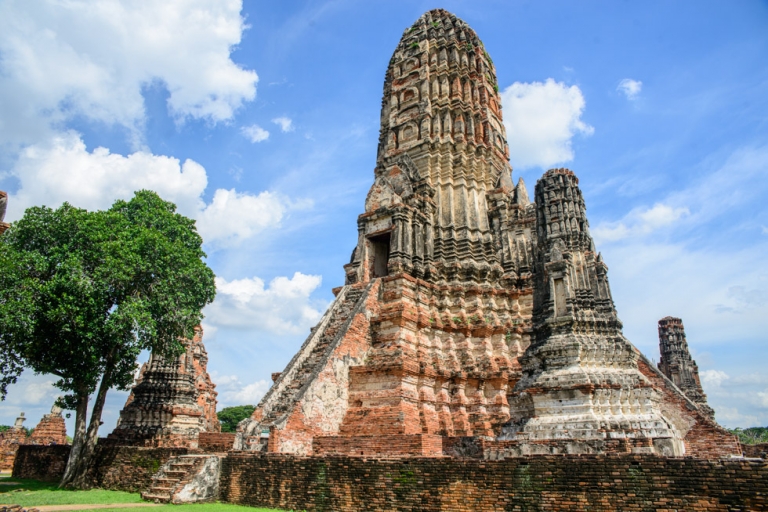 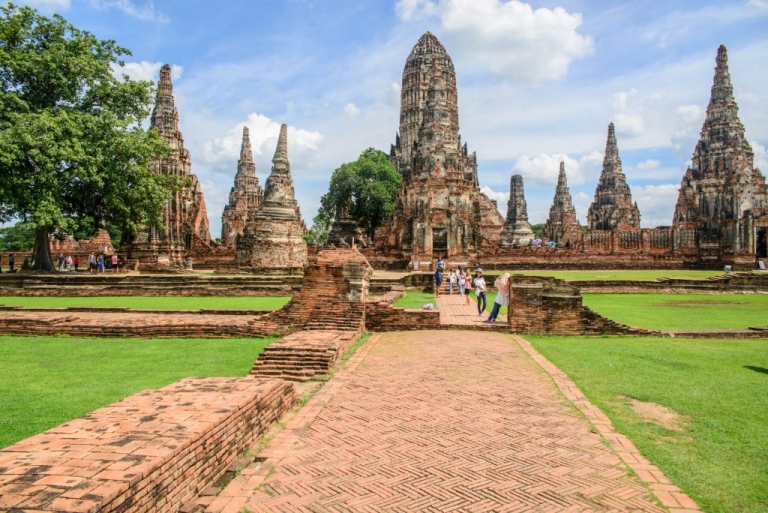 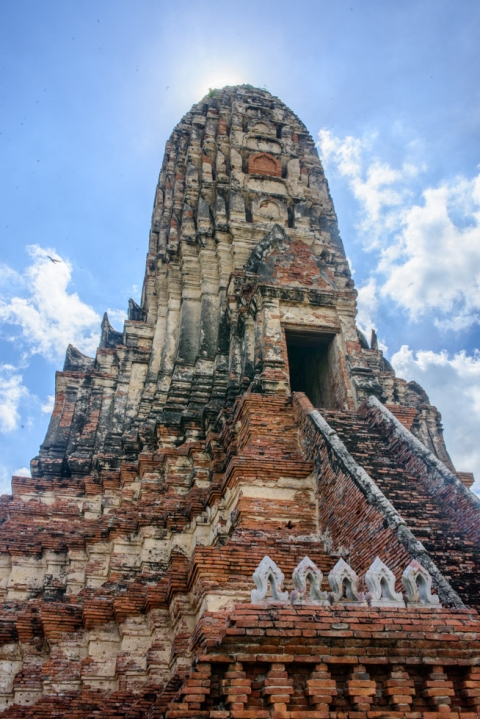 When Ayutthaya was the largest city in the world this temple was its holiest. Its construction commenced in 1374 under King Phra Borom Rajathirat and was only completed during the reign of his successor King Ramesuan. Today the temple is an attraction mainly because a Buddha’s head, which is completely surrounded by and engulfed in a tree’s roots, can be seen there. 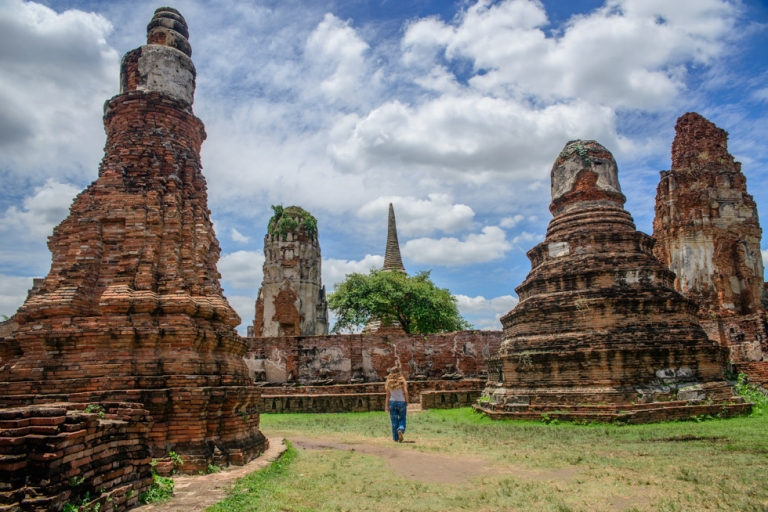 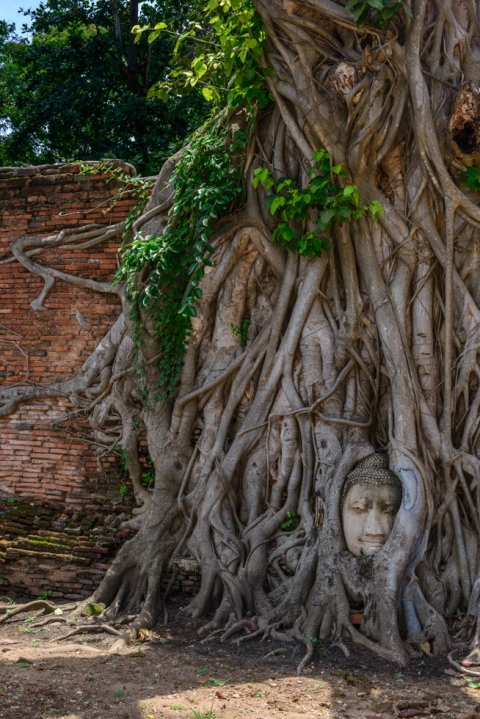 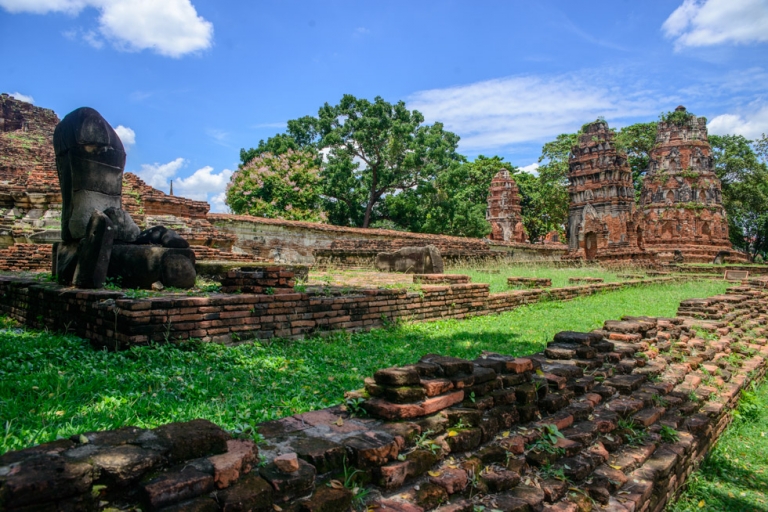 This temple-monastery consists of a large prang and some smaller chedi and outbuildings. A big lagoon is located at the front of the buildings and staircases to the side of the prang give views over Ayutthaya.  Its original name was “Nong Sano”. It was changed to “Bueng Phraram” and currently is Phraram Public Park. 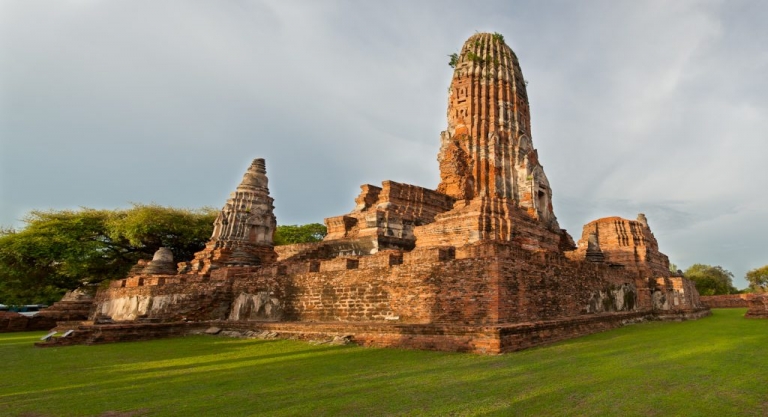 This is a working wat that also contains the ruins of a large chedi and a huge roofless viharn which has tall brick columns leaning at alarming angles and a large tree growing picturesquely out of the side of one wall.  Located to the north of Phra Chedi it has a base of 52 surrounding singha or lions and houses a north-facing reclining Buddha image measuring 12 m in length. 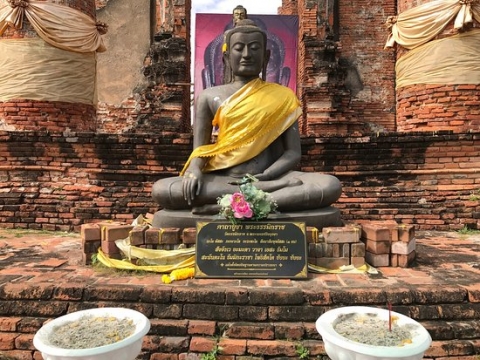 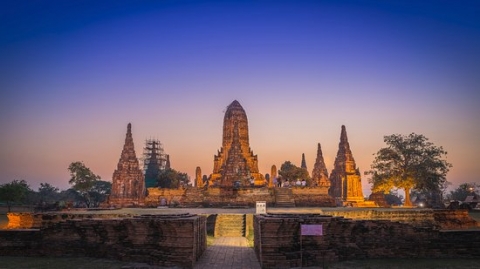 The pagoda in the centre of Wat Yai is the largest in Ayutthaya and can be climbed. It is a very popular sanctuary to Thai people. 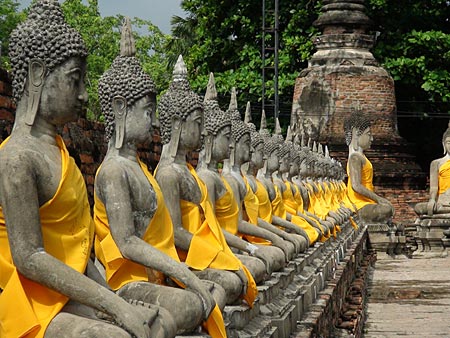 In order to access Wat Phanan Choeng you’ll need to catch a short ferry ride but don’t let this deter you.

This temple predates Ayutthaya by twenty-six years. No one is sure who built the temple although various kings have helped to restore it. The Buddha statue inside — known as Phra Chao Phanan-Choeng — dates to 1325 and is famous throughout Thailand. It is the oldest and largest statue in Thailand standing at 62 ft tall and 46 ft wide. 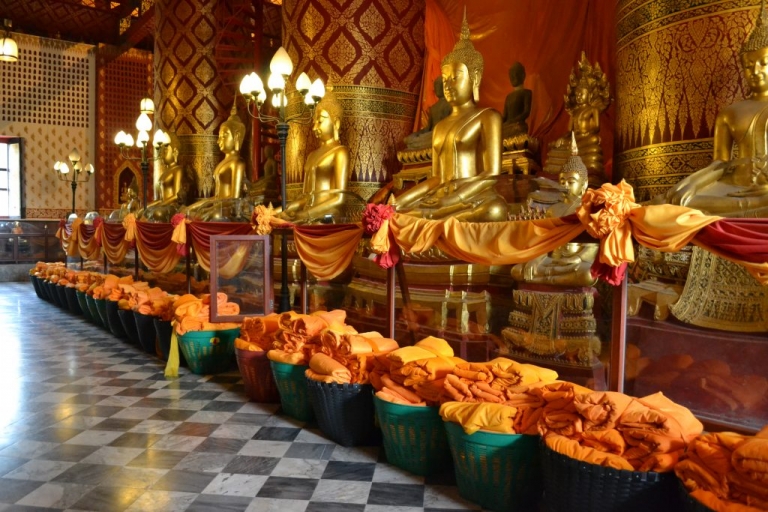 The Burmese King once decided to set up cannons here, pointing them directly at the Palace. Much to the relief of the Ayutthaya royal family, one of the cannons exploded while being fired and mortally wounded the Burmese king.

Because Wat Naphrameru served as a forward operating base for the Burmese army, it wasn’t as destroyed as other temples in Ayutthaya. Inside the temple is a rare seated Buddha image (19 feet tall), depicting Buddha as a prince in worldly regal attire before attaining enlightenment. These types of images are a rare find in Thailand. 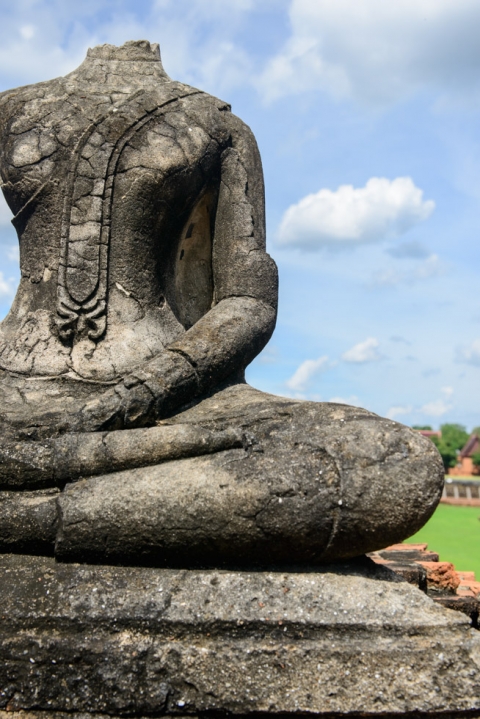 I cannot fathom why people thinks it’s a good idea to ride a chained elephant controlled by a monster with a bull-hook but they do.

Elephants do not exist for our benefit and riding them is immensely cruel. It isn’t cool to get a selfie riding one, the elephants do NOT enjoy being ridden (and have suffered enormous abuse, torture, humiliation and beatings for people to get on one) so please, please don’t do it. 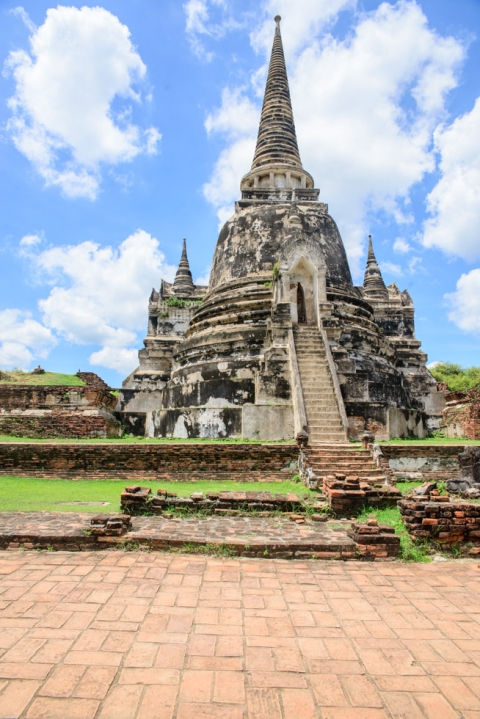 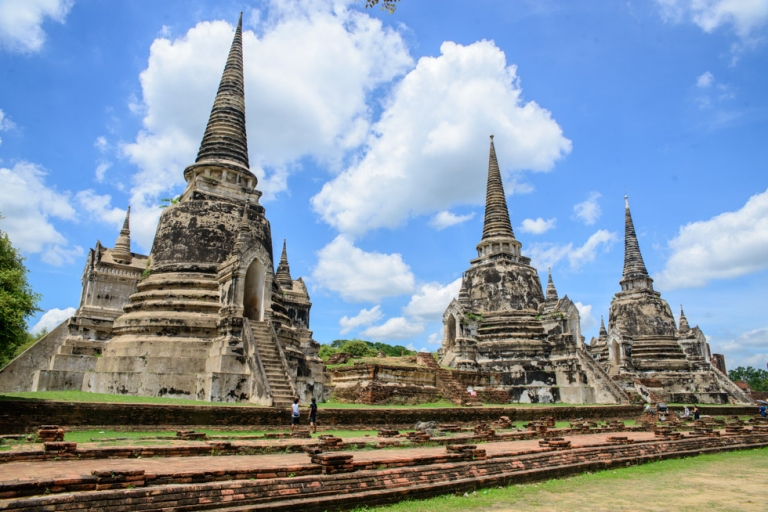 How can you book this tour to Ayutthaya Thailand?

If you fancy this day trip to Ayyuthaya, then you can book it here. We had a brilliant time and I’m quite positive it is impossible to take a bad photo of Ayutthaya.

Add this to your pinterest board by using the image below.

What else can you do in Thailand?

Spread the love
Posted in Thailand

« Why horse carriage rides should be banned in SevillePhare Cambodian Circus with kids: Just WOW! »