In late September it was still warm enough to wear a short sleeved tshirt but the winds were starting to pick up. We spent some time in the east of the country near the infamous Black Sea and visited Cape Kaliakra. Here’s what to expect if you visit. 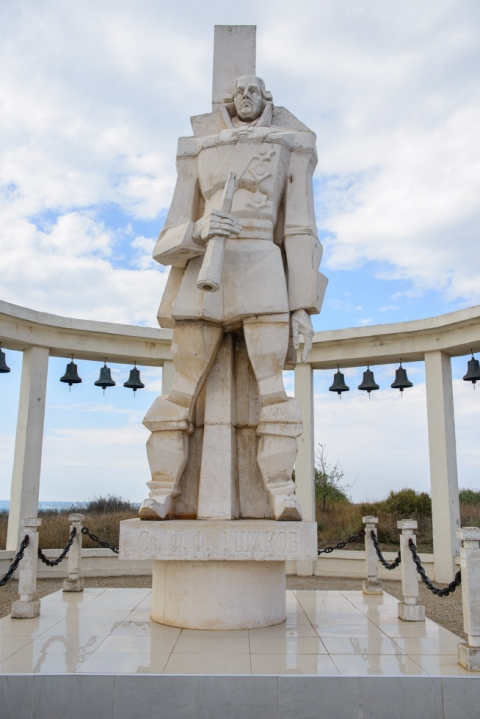 Kaliakra monument with the eighteen bells.

Just a short distance from the Romanian border in the region of Southern Dobruja is the peninsular of Kaliakra. Kaliakra is 130 km from Constanta which makes it perfect for a day trip if you’re visiting Romania’s black coast and want to pop across the border.

The entire area is surrounded by lakes and is a natural reserve; a favorite location for ornithologists as the long and rocky headland of about 2km juts out into the calm waters of the Black Sea.

Here lie the remains of a fortress and a settlement which conceal a brutal history of occupation, fortifications, suicide, siege and warfare. 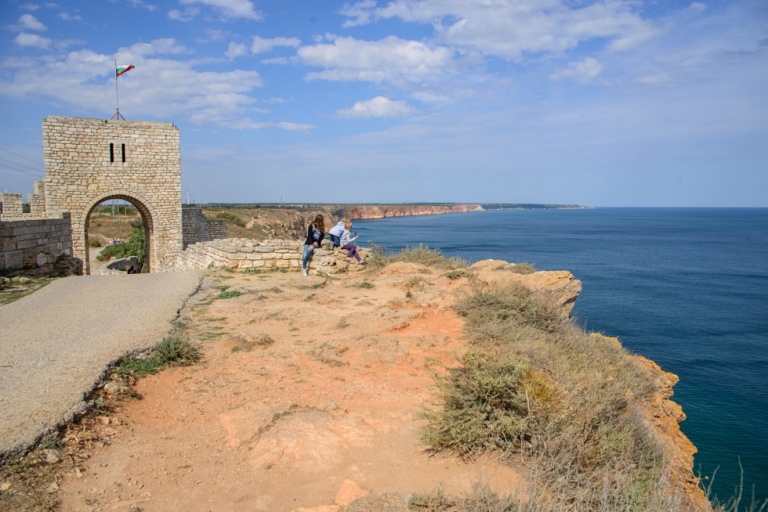 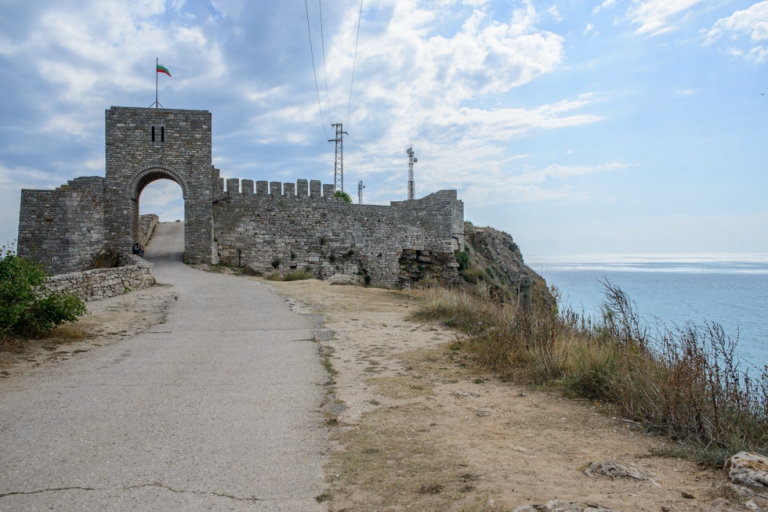 The story of the 40 maidens of Cape Kaliakra

The cape was originally settled in the 4th century BC by a Thracian tribe known as the Tirizi however it was occupied successively by the Romans, the Byzantines, the Bulgarians, the Ottoman Empire and the Kingdom of Romania.

In 1444, The Ottoman Empire invaded Bulgaria, burning and raping their way across the country.  While marching south to face the Ottoman Army, King Władysław III of Poland made camp at Kaliakra. He would later lose his life in the Battle of Varna, to be honoured with the title Vladislav of Varna, or ‘Vladislav Varnenchik’

Girls who were captured by the Ottomans were either kept for the pleasure of the officers or sent to join the Sultan’s harem at Constantinople.

It is said that as the Ottoman army approached, 40 local girls fled to the end of the headland. They tied their hair together, and jumped from the edge of the cliff; preferring to die on the rocks beneath rather than be captured. An obelisk known as ‘The Gate of the 40 Maidens’ now stands at the entrance to the cape, in memory of their sacrifice. 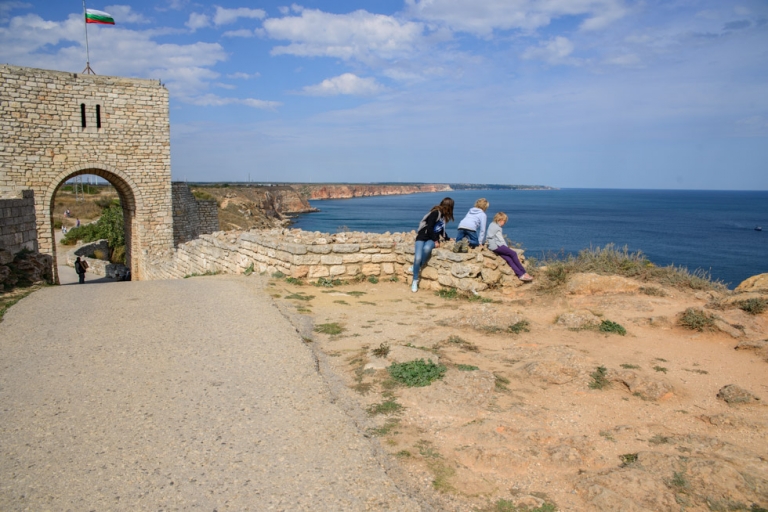 Trying to peer over the rocks at the coast below

The fiercest battle of Cape Kaliakra

Although the cape was to play a key role in the Russo-Turkish War the actual fortress had long been destroyed in the 14th century by The Ottomans.

Russian Admiral Fyodor Ushakov sailed south to smash the Turkish fleet. The Battle of Cape Kaliakra, fought on 11 August 1791, was the fiercest naval battle the Black Sea had ever seen and brought an end to the Russo-Turkish War of 1787-1791. 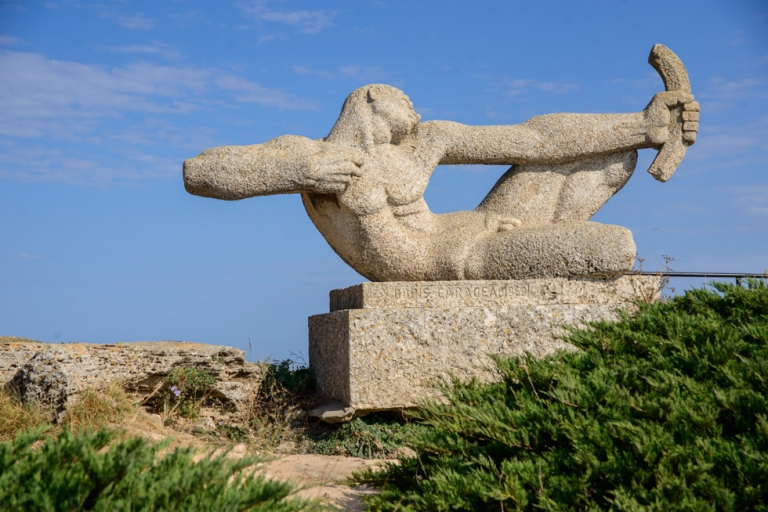 How to get to Cape Kaliakra

The roads in Bulgaria can be a little hit and miss; some paved, some not so much and some not at all. The relatively slow speed limits accommodate the road conditions.

Here a long, single track road is paved patchily with a few pot holes and leads along the 2km peninsula. 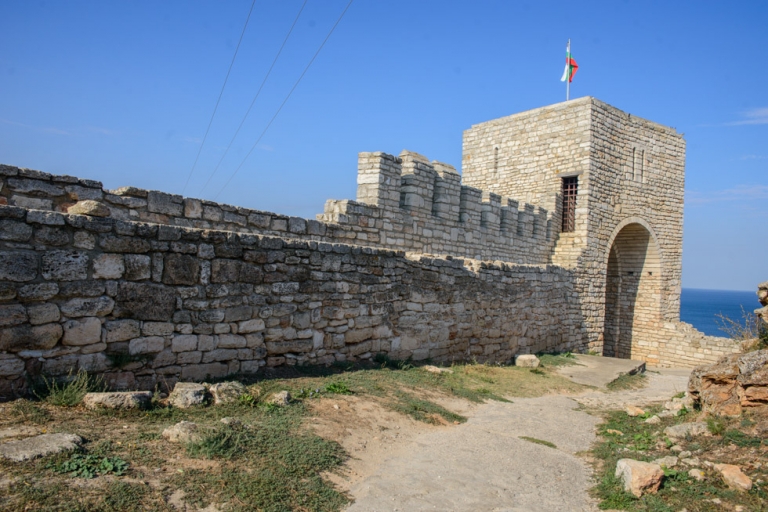 How much is entrance?

The entrance gate is located on the road/track and the  fee is 3 Lev per adult and children are free. 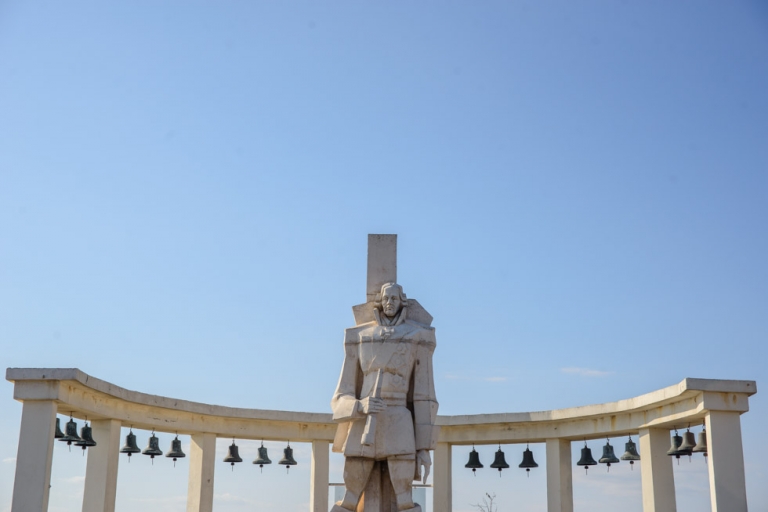 There is a small parking area for approximately twenty cars. Do be aware that there are coach loads of tourists although the coaches are not allowed to park in the car park they do partially block the road further down. The tourists mostly go to visit the museum which is located in/under the cape in a cave but just be aware there are coaches.

At the entrance to the car park is a huge statue on a pedestal dedicated to the Russian squadron led by Admiral Usakov who destroyed the fleet of the Ottoman Empire and ended the Russian-Turkish War (1787-1791). You cannot fail to miss it towering over the car park as it has eighteen bells attached to it. 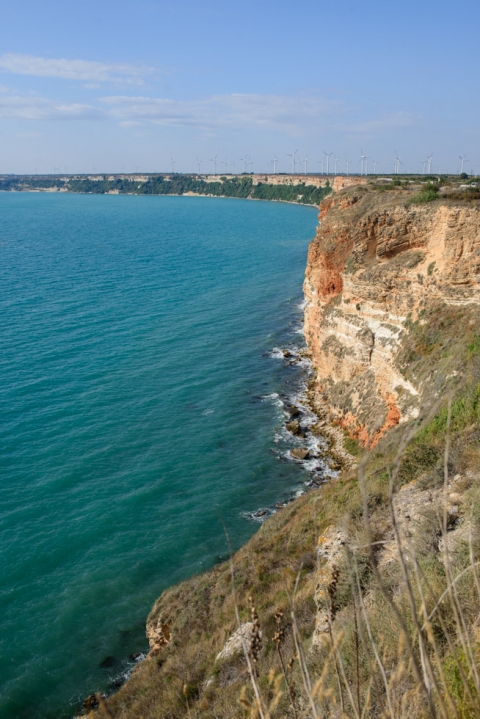 You can visit the Cape Kaliakra museum

A museum that preserves many archaeological finds discovered on the territory of the reserve is set up in one of the caves below the Cape. I was informed that the model of the ancient fortress is one of the most attractive exhibits in the museum but alas I didn’t see it. 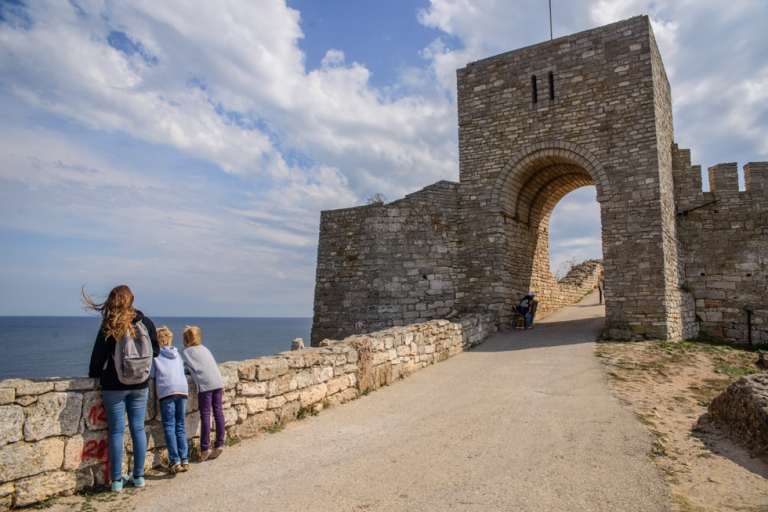 Walking through the gateway

The gateway to the fortress is imposing and well preserved as are the walls surrounding the fortress. As you enter, there are plaques identify the ruins of public baths, churches, dwellings and an aqueduct that feeds the fortress from the wells nearby.

You are able to wander around freely and even touch the old walls and ruins following paths along the grass. But don’t lean too far over the edge of the cliffs. 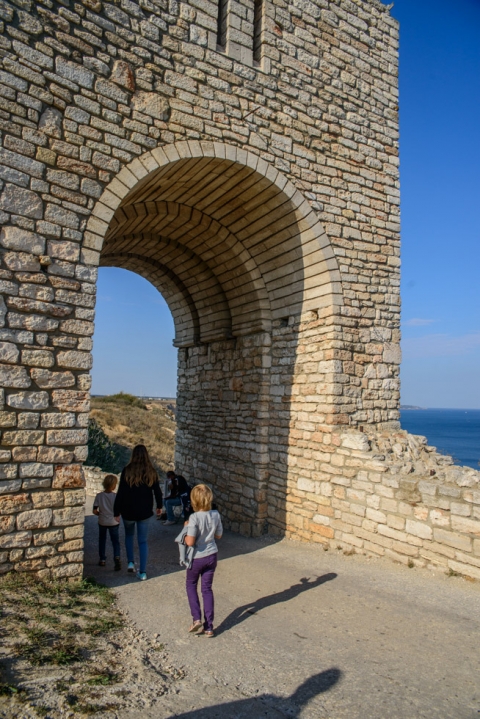 Don’t go too close to the edge

The slopes off the cape take a 60 – 70 m plunge straight into the sea. The waves have carved caves and arches at its foot that can be approached only by the sea. In the past some of these tunnel-caves were connected to the fortress and were used for loading and unloading ships.

There are no safety fences or barriers so really, don’t go too close to the edge. 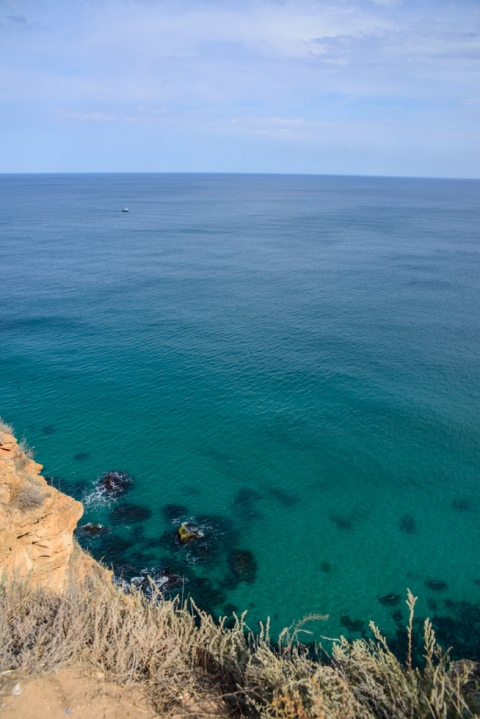 Looking over the edge at Kaliakra

Admire the view from the chapel of St Nicholas

There is also a viewpoint, a window between cliffs where the sea is seen at an angle of about 300 degrees. Logically it is very crowded, everyone wants their picture there with some people even clambering on the rock’s edge. 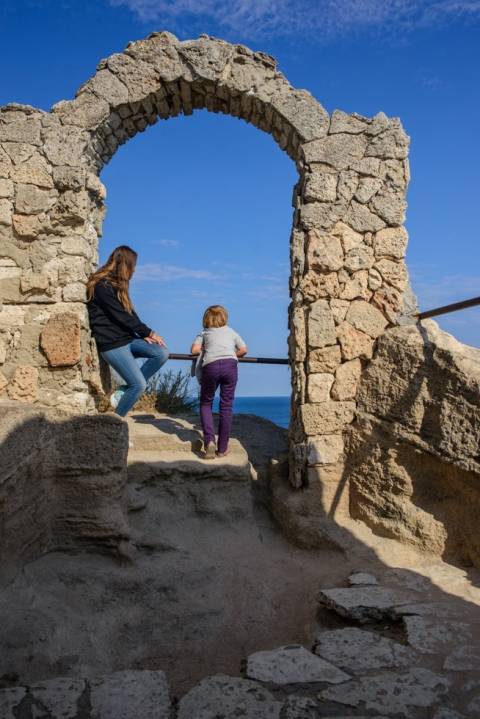 Can you reach the forbidden gate of mystery?

After seeing a stone window off the marked pathway and recognising it from several photos, I decided to take a deviation. The pathway is actually blocked off and it’s marked as a dangerous route but you still can get down.

It looks like a small section of the path has eroded so be careful because the drop off the side of the cliff might render you pretty useless lol. 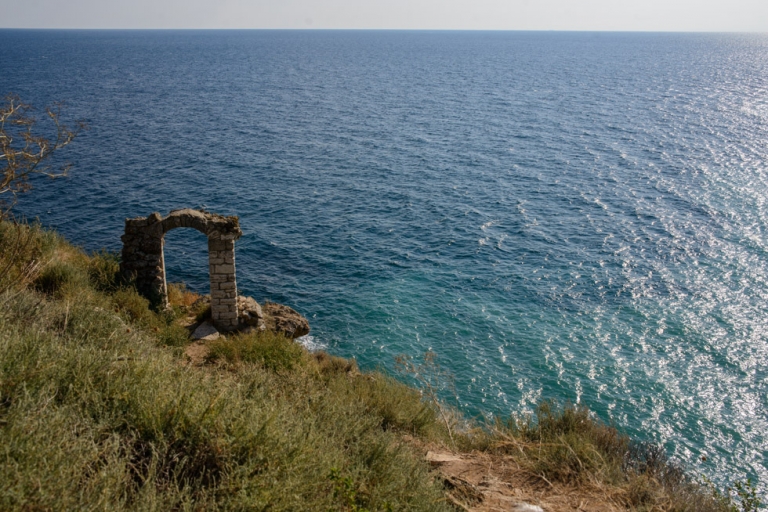 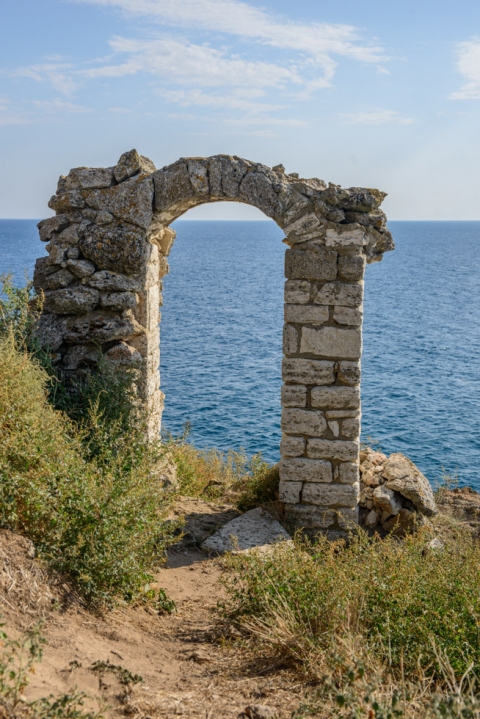 Kaliakra stretches over 687 acres where more than 400 plant species can be found as well as 310 kinds of birds, 100 of which require special preservation.

The region is extremely important for migrating birds because Via Pontica, the second biggest migratory route in Europe, passes over the area. Every autumn between August and October thousands of birds fly through the reserve including  approximately 29,000 storks, pelicans and cranes, as well as over 3000 birds of pray, including the globally endangered Pallid Harrier, the Circus macrourus, the Saker Falcon, the Falco cherrug and the Eastern Imperial Eagle.

When I read this, I got really excited and envisaged seeing hundreds of long legged, big beaked birds flying over head. Instead what did I see? A flock of tiny tits and a sparrow hawk. I was quite disappointed but maybe you’ll have better luck?

We also managed to spot a pod of dolphins near what looks like a fish farm below. 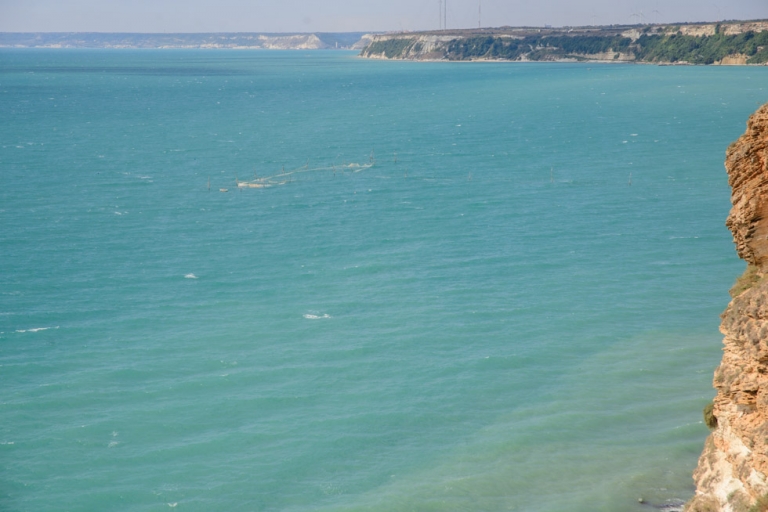 Fish farm off the coast of Kaliakra where we saw dolphins

What is at the cape now?

At the end of the cape there now stands the secure compound of a medium wave broadcasting facility and meteorological centre. Just look up and you’ll see the masts. 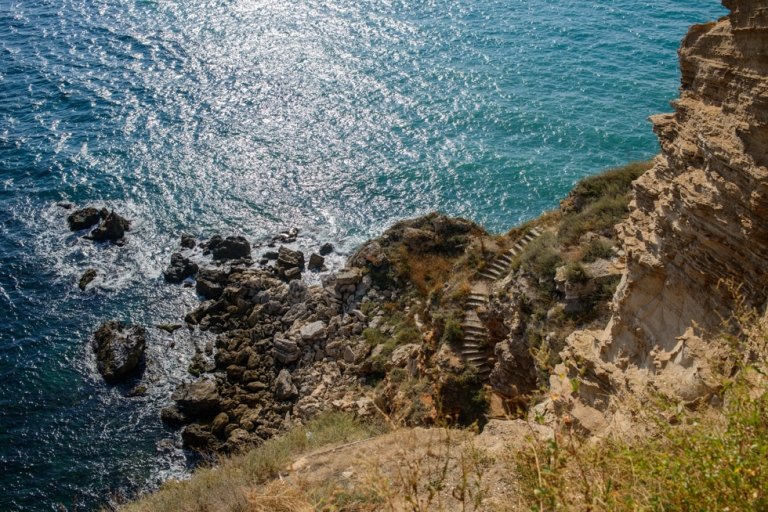 Steps carved into the rock at Kaliakra

Fancy a quick dip on a local beach?

It isn’t signposted at all but after leaving the fort complex if you take the first road on the right you can drive down to the beach of Bolata.

According to google photos Bolata is busy in the summer with sun umbrellas littering the beach but we were able to drive right onto it and were one of just a handful of people there.

The beach forms a small cove where the sands are grasses are wild, the creek runs clear and there’s a decrepit  pier which protects against the Black Sea – not that it’s very rough.

Our rental car on the beach 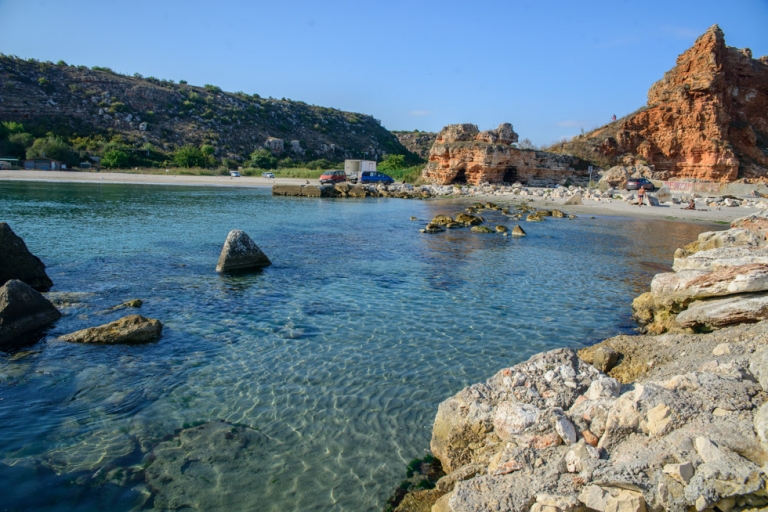 Bolata Beach sits at the bottom of Kaliakra

A video of our time at the beach

You can Pin this

What else can you do in Bulgaria?