With the summer holidays of July beckoning, the kids and I (Emma) left Rich working in Europe and jetted off to the Indonesian island of Sumatra.  After a stint in the jungle of Bukit Lawang and trekking the volcano of Sibayak we headed further south-west towards the Indian Ocean where we spent four nights at Rimba’s Ecolodge Sumatra. Here are some tips on visiting Sumatra and what you can do there. 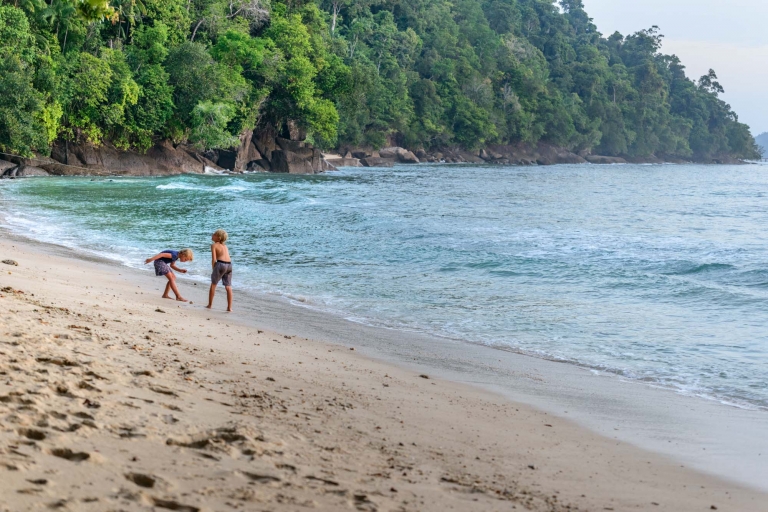 The kids playing on the beach at Rimba’s

What is Rimba’s Ecolodge Sumatra?

Rimba’s is an eco-homestay on a private beach, bordering the Sumatran forest. To say it is an exquisite spot would be a gross understatement, it is the most beautiful stretch of land I’ve ever come across.

On one side of the lodge is the lush, green rain-forest and on the other is a turquoise calm beach leading out onto a tranquil bay with clear waters and turtles! One family spotted eleven turtles in the immediate area although we only spotted and swam with one. Only one lol.

If you’re looking for a once in a lifetime type opportunity and you’re not afraid of a few bugs, this is definitely the place for you. 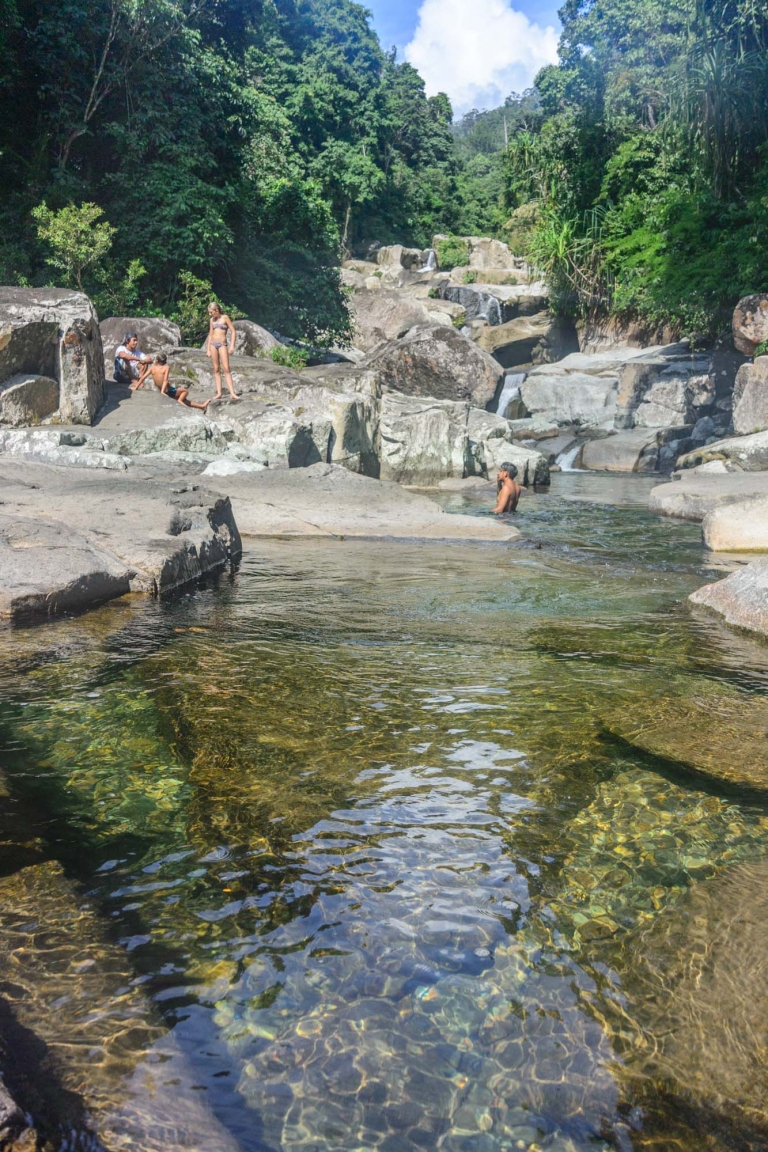 And what is Rimba’s association?

Rimba’s has a non-profit association (like a charity). For each night spent there Rimba’s donates 5,000 rupiah per guest to the association. This in turn helps to fund the school assistance program which supports the students of a local school.

You can also donate directly to the school assistance program by donating money for school supplies. The association likes to buy these supplies from local businesses because it supports them at the same time. 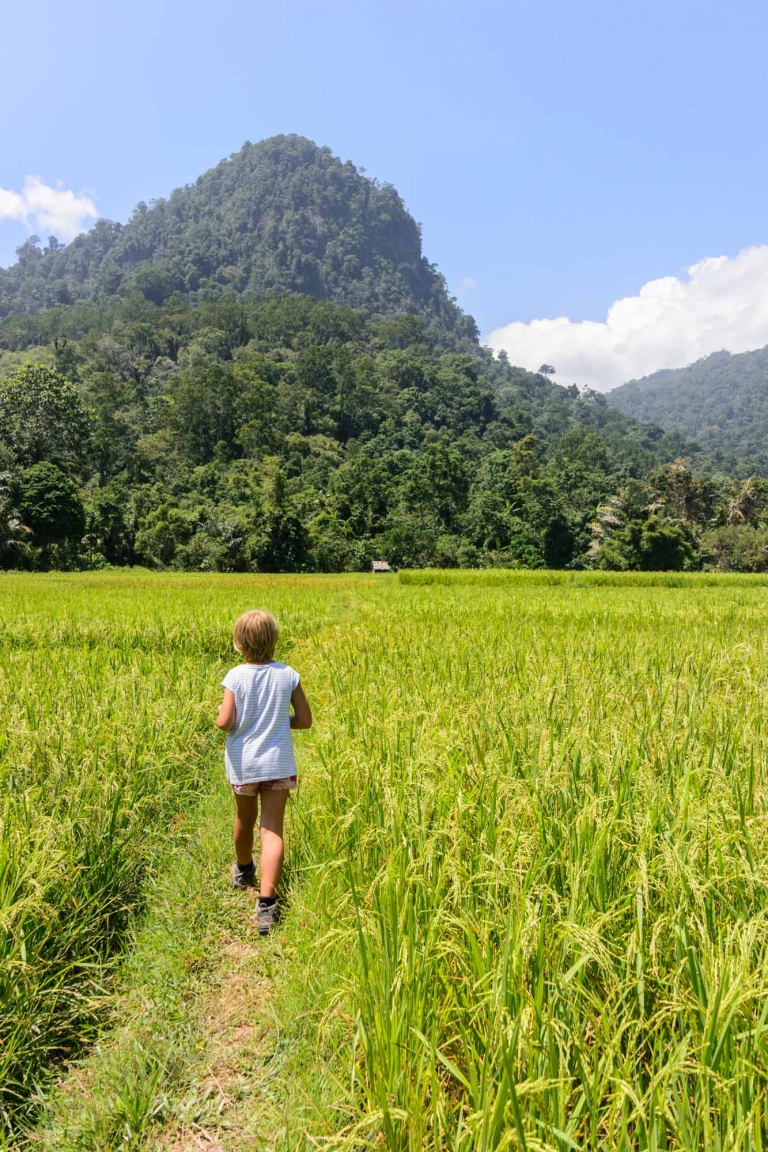 Jungle hike to the waterfalls through the rice paddies

How can you get to Rimba’s Ecolodge Sumatra?

We flew into Padang airport from Medan in the north.  Originally we’d planned to drive from Berastagi but a journey of just a few hundred kilometres was going to take over sixteen hours. As a mum, alone, with three kids, I didn’t have the patience for that so we flew from Medan.

If you fly into Padang, you’ll need to get a car or a taxi down to meet the boat which goes over to Rimba’s. The boat moors up in the bay next to Tintin’s (see map below).

Even though it looks like there is road access access to Rimba’s through the forest, there isn’t. The ONLY way you can get there is by boat which you must pre-book.

Getting the boat over to Rimba’s Ecolodge Sumatra

When we were told that Rimba’s was only accessible by boat we had no idea what to expect but we were so excited to find this hide-out deep in the Sumatran rain-forest.  It’s the stuff dreams are made of!

The little green, wooden boat collected us from near Tintin’s and we set off on the bright blue seas for about forty-five minutes. Along the route you pass a few other resorts tucked into beachy coves and a few fishing boats but what hit me most was the size of the trees and the quiet.

Aside from the engine, the area is silent. The fluffy topped green trees with their huge trunks, standing tall above each other is a tremendously powerful sight especially after all the palm oil (plantation) destruction we’d seen in the north of the island.

It was a humbling experience to be sat on a tiny boat looking out onto the sheer expanse of forest that lays around you. For a while we just sat there and stared, trying to take it all in. 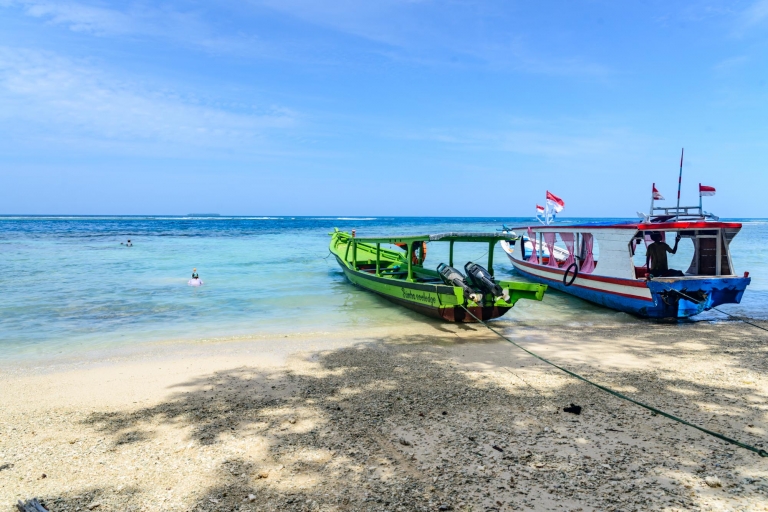 Arriving at Rimba’s was such a new and fabulous experience for us. The cove is quite shallow, especially at low tide and the bottom of the boat scratches the rocks underneath until you can go no further. The water was unlike anything we”d ever seen before. In Europe the water is clear but the range of fish and coral is not so diverse and from the boat you can literally look down and see life.

The kids were phenomenally excited. They just couldn’t believe that we were staying on a beach paradise. 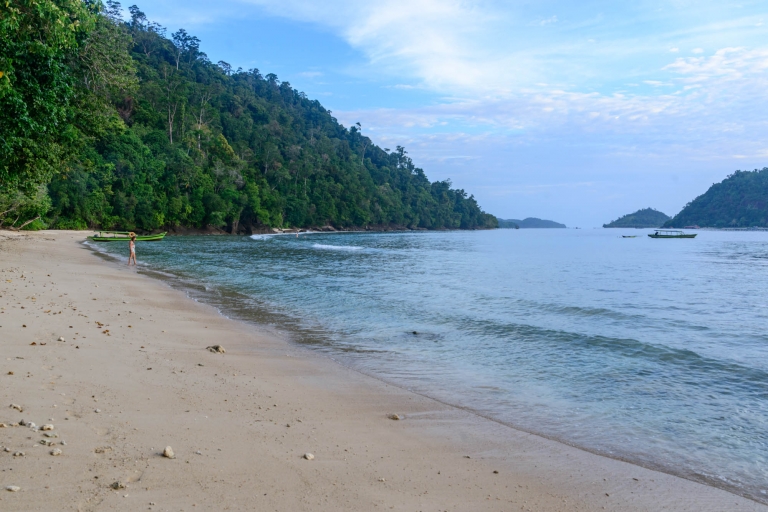 What do you sleep in?

They were a bit over-booked when we reserved so we agreed to stay in a shared bungalow with a shared bathroom.

The lumba-lumba bungalow comprised of three separate rooms each with individual terraced areas which had a sofa and a table. The bungalows were all built from local wood and in each room was a large four poster bed and a clothes rack, again all hand-made from local wood.

Sharing a room meant that the two young kids and I shared a bed and our teenager had a mattress on the floor. Both beds had mosquito nets although the mosquitos aren’t overly a problem and there’s no malaria in the area.  The room was very cramped with the mattress on the floor and it was a challenge to all be so squashed but it was only for four nights.

The rooms are simply made with dark wood with one opening door and two windows. It goes without saying that these are rustic and you might well get ants and other creepy crawlies in the room with you. There’s no insulation or double layering etc, it’s a bungalow made out of roughly cut wood. 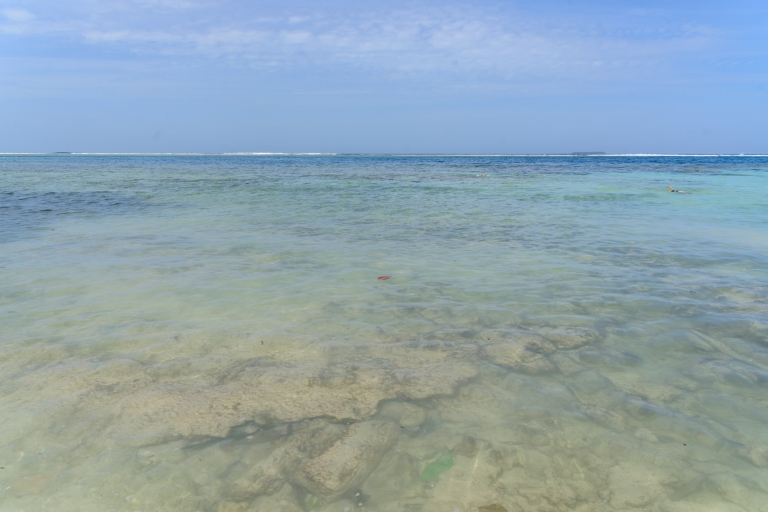 The view from Merak Island

What about the bathrooms?

The bathroom we used had a fully plumbed toilet but you must not put toilet paper in it. It also had a sink and a shower with plumbed water – although the water is NOT heated. I was brave enough to get one shower but beware, it’s a shock after the heat of the sun and ocean!

There is electricity in the bathroom but it’s wise to take a torch too. You’re in the middle of the jungle and if you turn the lights on you’ll attract a swathe of insects all looking for the moon. 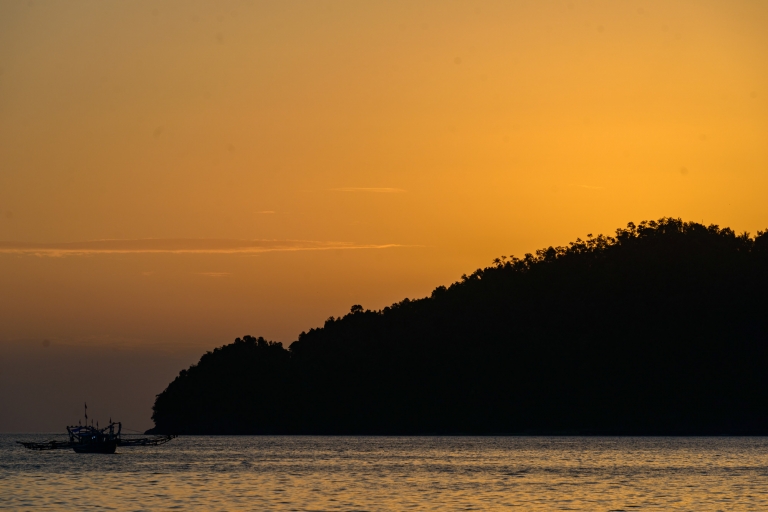 The sunset over the bay at Rimba’s

Where do you eat?

On the main beach is a large lodge which houses the staff-run kitchen and the guest area. Here are two small sofas, a selection of tables & chairs and a bar where you can order drinks.

Meals are provided for you and you’ll need to inform them of dietary requests. See below for things we didn’t like. 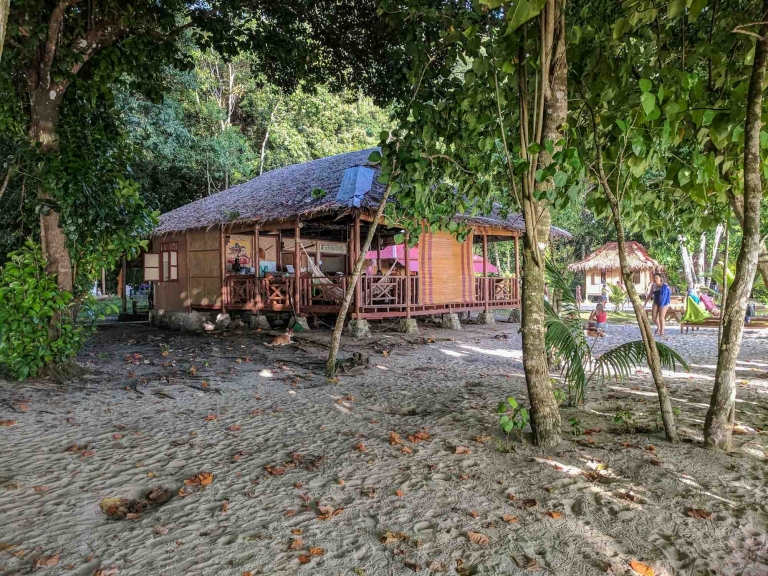 Activities to do whilst there

There is NO INTERNET or PHONE RECEPTION here. Once you’re there, you’re there! That’s it, you cannot just leave so it’s wise to know what you’re letting yourself in for. In the beginning, with no possible contact with Richard, I did feel a bit bereft but I managed to get some mobile reception when we went to the town of Sunai Pisang on the third day. Had Richard come with us, we wouldn’t have cared about the lack of mobile reception.

Some of the below activities you must pay extra for.

I’ve read that you can do other jungle hikes and that there is a traditional canoe you can use too, although I didn’t see it. 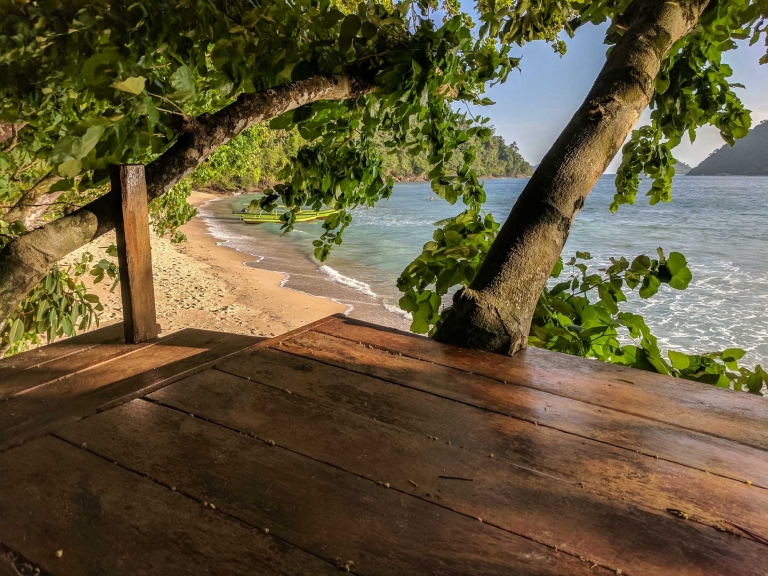 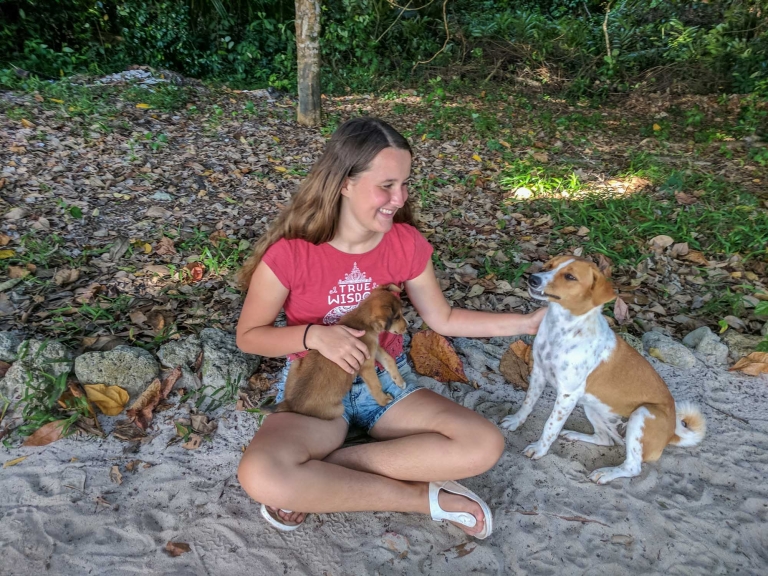 Playing with the dogs. Phone shot 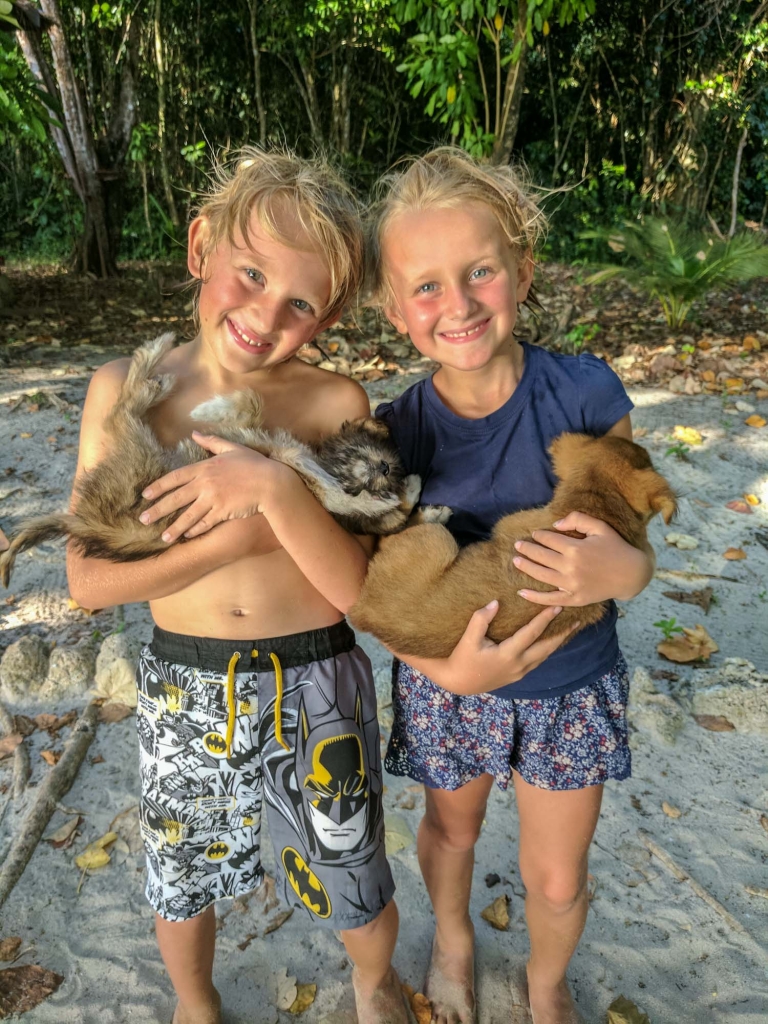 Playing with the puppies at Rimba’s. Phone shot

Many of the activities cost extra to the accommodation. These are listed below and are 2017 costs (subject to change):

Our total additional costs whilst staying at Rimba’s were – 1160,000 rupiah (excluding car from airport).

The kids happily swam all day at Rimba’s 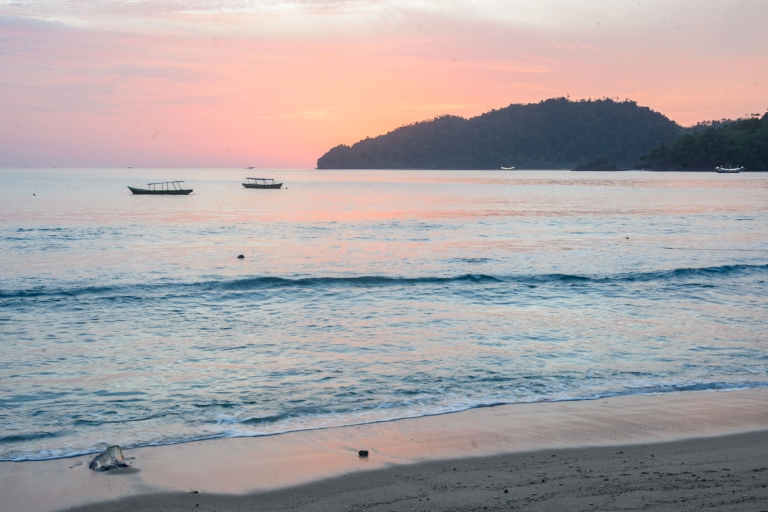 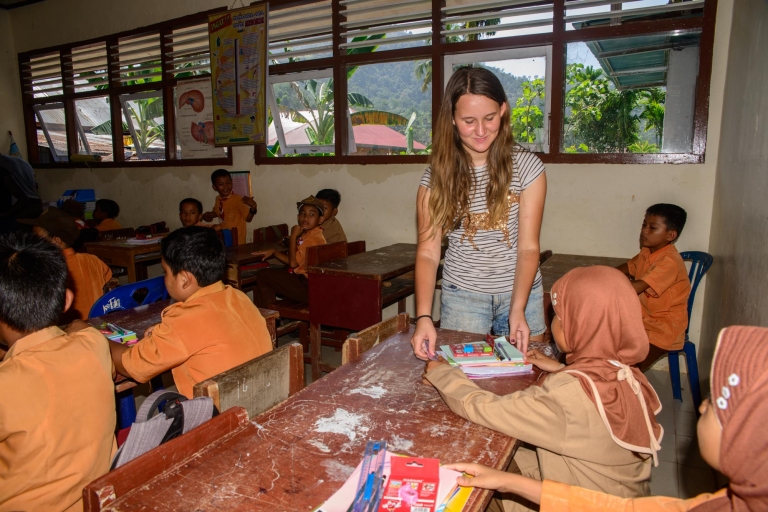 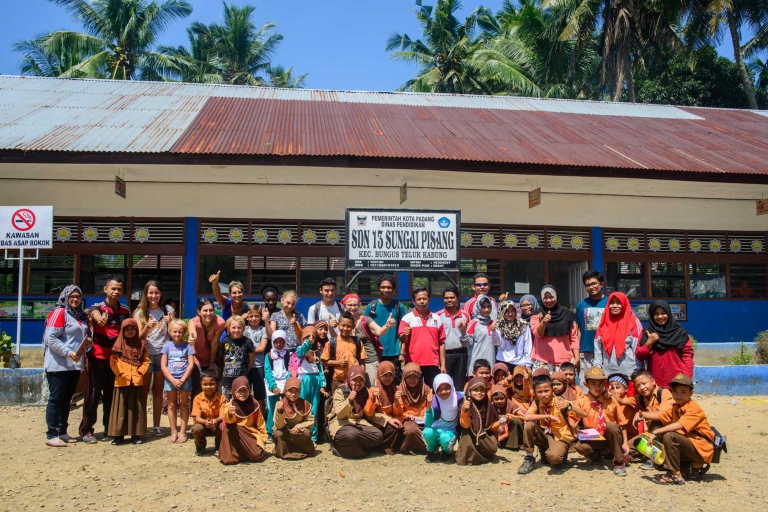 I didn’t feel particularly welcome at Rimba’s although I know all of the other families there did (they were French as was the owner so maybe this had something to do with it) and for me, that tarnished the experience a bit although the kids had an amazing time.

The extreme hunger and the loneliness of not having Rich with me was a challenge which I overcame but there’s no doubt to me that I would have had a better time had he been there.

The kids however had a FANTASTIC time and absolutely loved being there. They would go back again in a heart beat and that’s what our travels are all about. The dogs were friendly and adored the attention the kids gave to them, the visit to the waterfalls gave them the opportunity to jump about 10m and gain much confidence in their own ability (separate blog), the school was an experience we will never forget because it was just so different from our own experiences of education and Merak Island was just astounding.

All in all we are very grateful for the experiences we had there and the opportunity we had to stay at Rimba’s. Would we do it again? YES (but I’d take some food with me)! 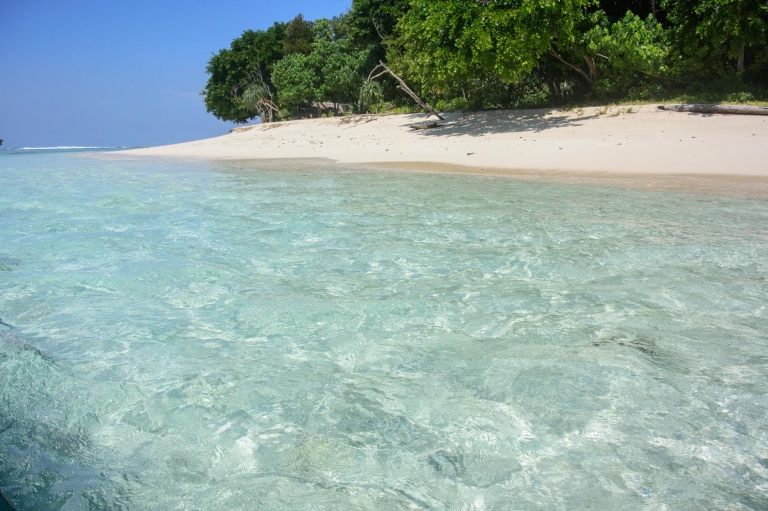 Video of our time at Rimba’s Ecolodge Sumatra

Video footage from the boat arriving at Rimba’s and our time spent there.

How to book time at Rimba’s Ecolodge Sumatra?

Other places to stay in the area

What else could you do in Sumatra?