Should I take my kids to Sumatra? What to know about travelling there

I travelled to Sumatra alone with my three kids ages (at that time) 7, 9 and 14 in July 2017 and we spent roughly 3 weeks there. Of all the countries that do not have access to safe drinking water, Sumatra was the most inaccessible and remote place we’d ever been to and there was virtually nothing on the internet about visiting with kids.

Aside from the occasional news article I’d read, I knew very little about Sumatra and it seemed that very few other families had visited. I guess you could say it was a risk going all the way over there but I’m very glad we went. This post is all about what to expect from travelling around Sumatra with kids.

How We Got To Sumatra

We were already in South East Asia, having flown in from Athens with Scoot. So we flew from Penang in Malaysia to Medan on the north east coast of Sumatra and we flew out of Padang on the western coast. We arrived three hours late due to a delayed flight and we left over an hour late. This was one of many experiences of delayed flights in the area. If you book connecting flights make sure to leave about 3 hours or more in between each flight! We had three connecting flghts from Padang, Jakarta & Bali to Cairns and we very nearly didn’t make our connection out of Bali despite leaving over twelve hours prior. It was very nerve-wracking as we were running full steam through Bali airport trying to make our connection.

I had pre-booked a private taxi from Medan airport across to Bukit Lawang, the so called gateway to the jungle. Thank goodness I had because he waited for us at the airport. Private taxis are more expensive than public transport but they are also far more reliable.

In fact other (couple) travellers in Sumatra told me that the public transport drivers had repeatedly and blatantly ripped them off by charging double and would refuse them entry on the buses unless they paid. Of course, to bear in mind, the double fee was about 50p/60c so it isn’t a huge amount but it was the principle that miffed them.

How To Get Around Sumatra

How can you get around Sumatra once you’re there?

Driving is a little, erm, haphazard. The quality could definitely improve. The roads can vary enormously from paved to partially paved, paved but at different heights for each lane, unpaved and totally dirt track.  It was all very hit & miss and I’m guessing this is why it was going to take us 16 hours to drive 200km (we flew instead).

In the bigger towns pedestrians are not respected & are treated as a nuisance, as are the seldom cyclists. Nearly every 2 lane road is divided into 4 lanes by impatient drivers who think they’ll get there quicker by pushing past. You must really be observant but as I said, I would drive there.

Just watch out for animals on the rural roads; chickens are the most prevelent but there were also goats.

Medan is the capital city of North Sumatra and there’s a wide range of Indonesian and Asian food. The western market is not overly developed but they do have a dunkin donuts!

Something we noticed a lot in Indonesia is that vegetarianism includes chicken and the concept of veganism is totally alien. Everywhere we went there was egg mixed through the rice, chicken served with just about everything. There were very few vegetables or vegetable dishes and even fruit was a little limited. We all lost a lot of weight whilst we were there and in the end we started buying shop bought crisps just to keep us going.

Tempeh, however is pretty common and we think it’s delicious but it can get a little limiting. Be aware that everything is fried in gallons of palm oil because it’s so readily available.

Probably the funniest thing we saw in Padang were french fries and nuggets sold loose & directly from a freezer.

How Did We Find The People

I was expecting the experience to be similar to Morocco or Egypt and in many ways it was.  In the tourist areas we were definitely seen as cash cows, rich and stupid & were treated as such. In the less touristy areas we were stared at and generally we felt a little awkward but not unwelcome. We were just strange and the locals were curious as to why a solo female was travelling alone wtith three kids. ‘Where is your husband?’ was a common question but it wasn’t meant rudely.

Whilst we were staying at Rimba’s and Ricky’s we were welcomed into two schools and the high school kids all spoke English with us.

What Religion Is It?

The dominant religion is islam although there are small pockets of christianity. Atheism does not exist and is not a concept that they’re even allowed to consider. I would not discuss atheism unless it is brought up as you could be considered to be blashpeming and speaking against islam which is a punishable crime.

Sexism is rife and many men seem to believe female tourists are easy conquests. It’s best to not make lingering eye contact with men and not smile too widely.

Because islam is a dominant religion and many people still don’t have access to life outside Indonesia, gender roles can be quite ‘traditional’ and women are supposed to dress modestly and at least cover their legs and arms.  There were many tourists who decided not to so I guess this is just personal choice. I wore shorts and sometimes loose cotton trouser-pants. I nearly always wore t-shirts with capped sleeves (just covering shoulders).

Only on the beaches and snorkellinhg with other westerners did I wear a bikini.

Very few places accept bank or credit card so it’s always best to get cash when you can or take it with you.

Cash machines are prevelent in large towns and can sometimes be seen as glass booths next to the road. We had no problems using our cards and cash was always available.

The currency in Sumatra is rupiah and £1 is about 14,000 rupiah so you might want to download a currency converter as all those zeros can be challenging. We have been using the XE converter app as it doesn’t require an internet connection.

Poverty levels can be very high the more rural you travel. It’s not uncommon to see people sleeping on the soil ground as they only have a timber hut. Although everybody we met had a phone of some description, they weren’t always smart phones.

I would recommend you be careful with money and not show too much at one time.

Phone reception was relatively good in most places we went except on the western islands. Internet was occasionally provided by accommodation but was incredibly slow. Good enough for the odd email and photos to social media but often social media wouldn’t load.

Where did you stay?

We tried to stay in local accommodation with the exception of two hotels because we just really wanted hot water. Hot water was not forthcoming, even when it was advertised.

Bukit Lawang: We stayed in budget accommodation Fido Dido but I’d also recommend Junia’s and if you’re looking for something a bit nicer the Ecolodge is beautiful.

Berastagi: We stayed at Mikie Holiday Hotel. I would definitely not recommend it for vegans. In fact I would skip Berastagi altogether and head for Bukuttinggi. 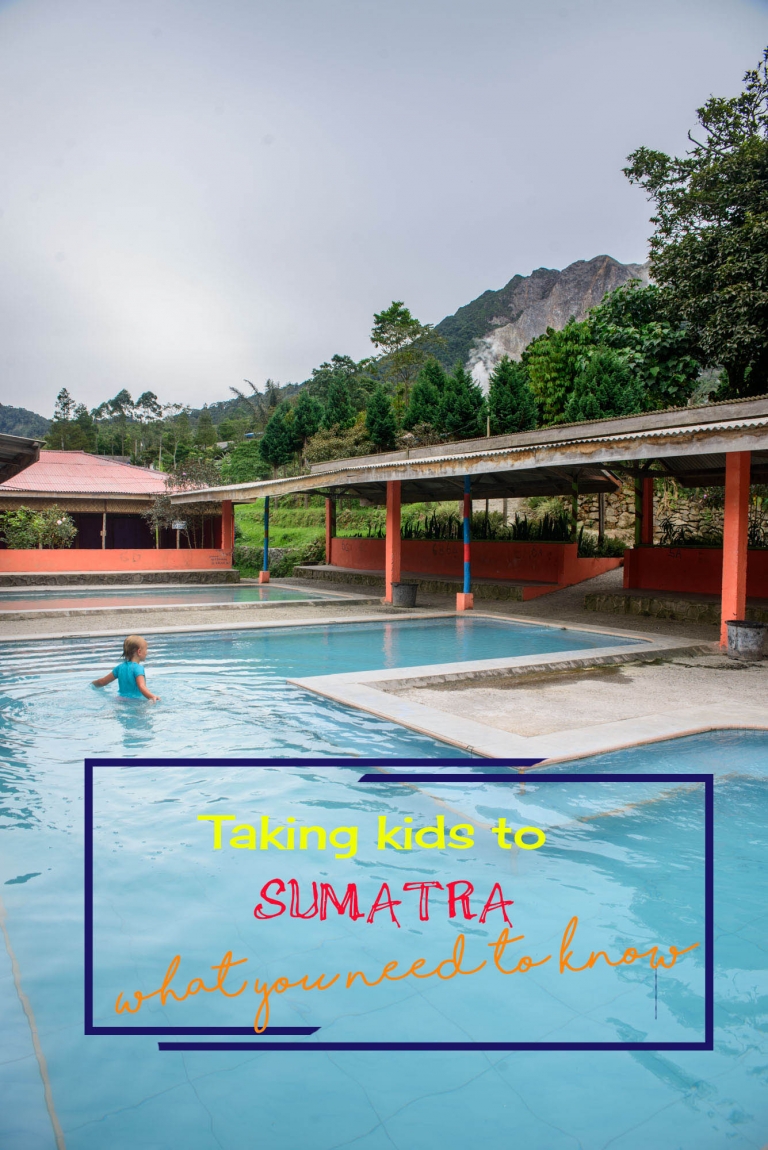 Things to do with kids in Sumatra

I hope this information has been useful to you if you’re considering going to Sumatra.  Here’s a selection of things that we did whilst in Sumatra and you could do too. We didn’t go to Bukittinggi which was probably a mistake, as everyone we spoke to said they had an amazing time there and there seems to be loads to do.