As part of a day tour by TNK Travel to the Cao Dai Temple and the Cu Chi tunnels, we were also taken to an art factory (Handicrafts ART) where Vietnamese people suffering from the effects of Agent Orange were employed. 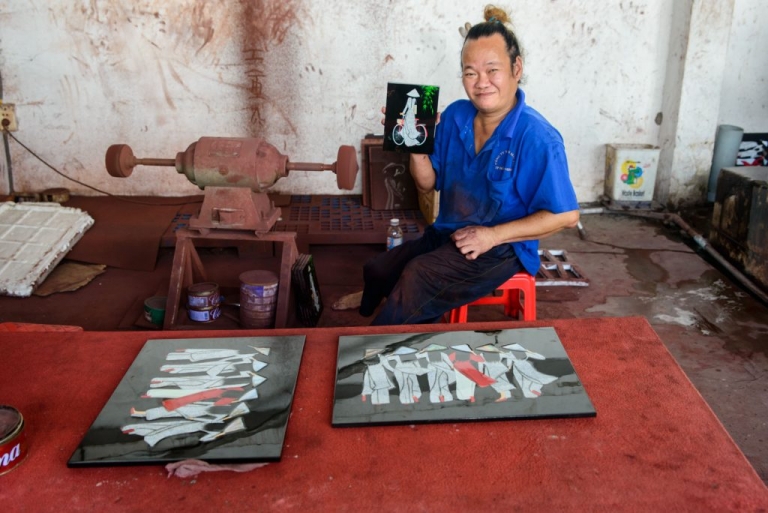 One of the men from Handicrafts Art

What is Agent Orange?

Agent Orange was a horrific toxic chemical that the US Army used during The American War. For a decade, it was dropped from planes with the aim of destroying forest coverage and farmland used by the Vietnamese people.

Up to four million people were exposed to it and around one million Vietnamese now suffer from serious health issues because of it.

The chemical is capable of damaging genes and can cause anything from terminal illness such as unusual cancers to other horrible illnesses such as hodgkin’s lymphoma. The aftermath has seen a horrendous number of birth deformities and deaths and will carry on effecting families for generations.

The use of Agent Orange in Vietnam resulted in massive legal consequences for The US and lawsuits filed on behalf of both US and Vietnamese veterans sought compensation for damages. 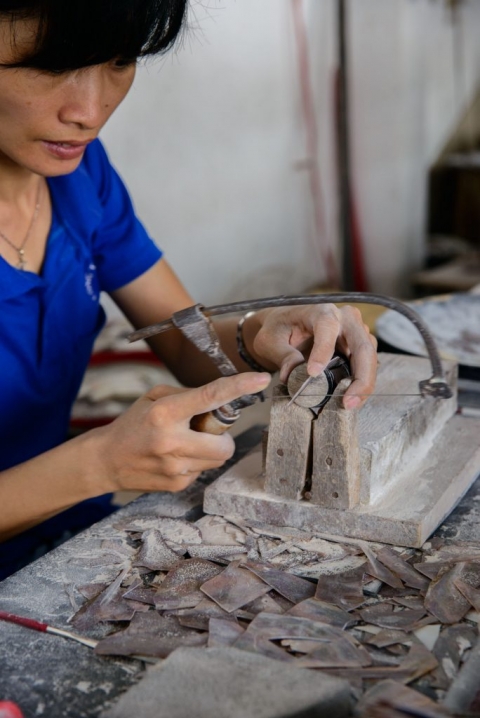 Cutting mother of pearly to be used in the art

What is Handicrafts Art?

This small enterprise employs people who have been directly effected by the effects of Agent Orange. It supports people who might not be eligible for work by teaching them the fine art method of lacquer painting.

The artwork is a combination of wood, egg-shell, mother of pearl, paint and lacquer and by using intricate methods and meticulous attention to detail the artists create beautiful art based on traditional Vietnamese cultural symbols.

The art is part of a long process, which you can watch at every stage, and the final outcome is stunning! This is something that you really have to see. 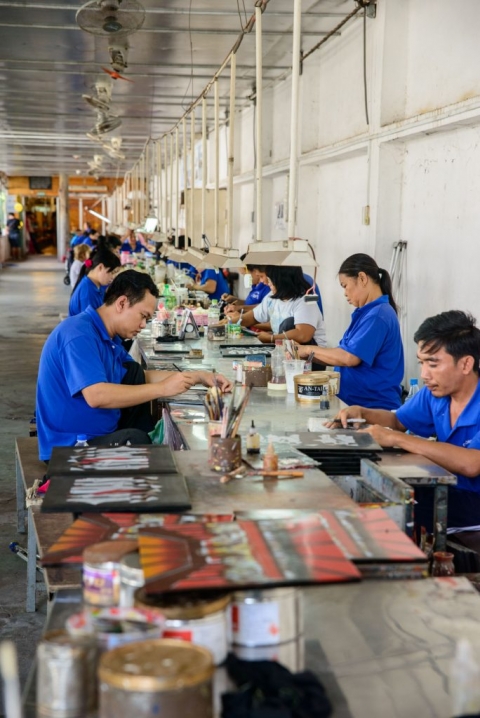 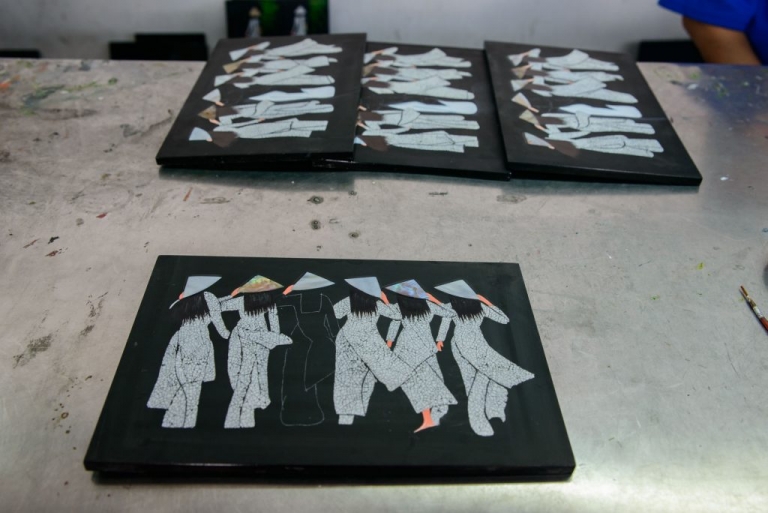 The history of lacquer painting

Lacquer painting or sơn mài as it is known in Vietnam is a famous ancient art technique. This style of painting has been found in ancient Vietnamese tombs dating back to the third and fourth centuries for the purpose of decoration and preservation.

During the 1930s it was fused with French techniques and was then considered as a distinct form of fine art. 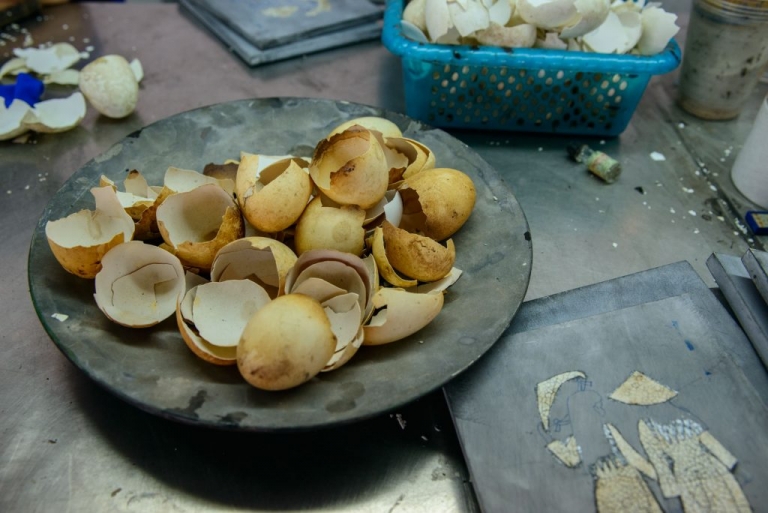 Although Google lists this place as Handicapped Handicraft (Handicrafts ART)  it also goes by the name of NAMQUOC.

It’s about 25km north of Saigon, deep in the Vietnamese country (which is beautiful by the way) and the factory and shop are open to the public.

Anybody can visit and have a tour and we definitely recommend that you do. You can drive here by youself, there is plenty of parking and the roads are in an average condition. 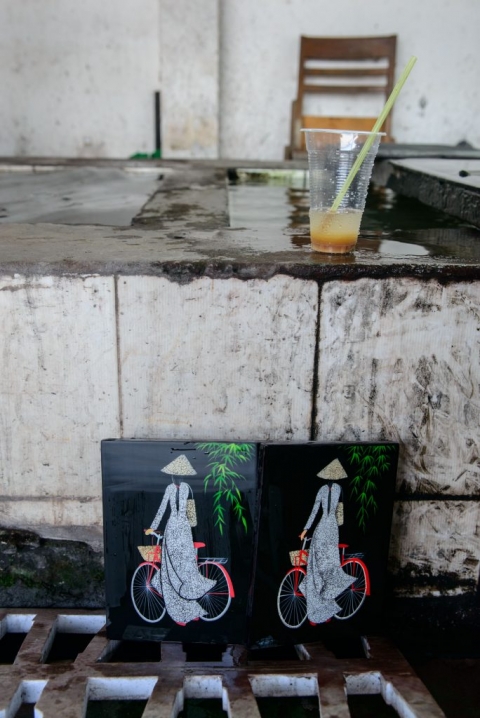 Some of the finished art work drying

Spend some time with the artists

We made our tour a little late because we insisted on spending some time with artists and I’m so glad we did.

They invited the kids to sit with them to watch how they made the art and then have a go themselves. It was an incredibly humbling experience with some thoroughly kind and generous people. 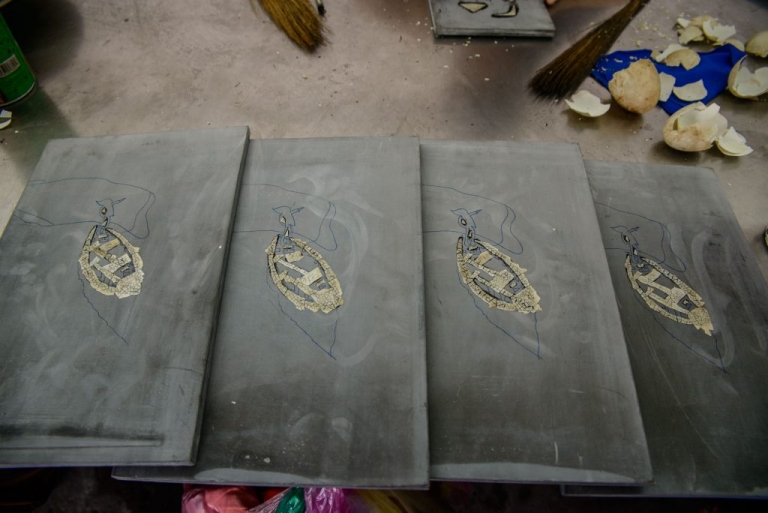 The first steps to creating the art is gluing duck shell into place. 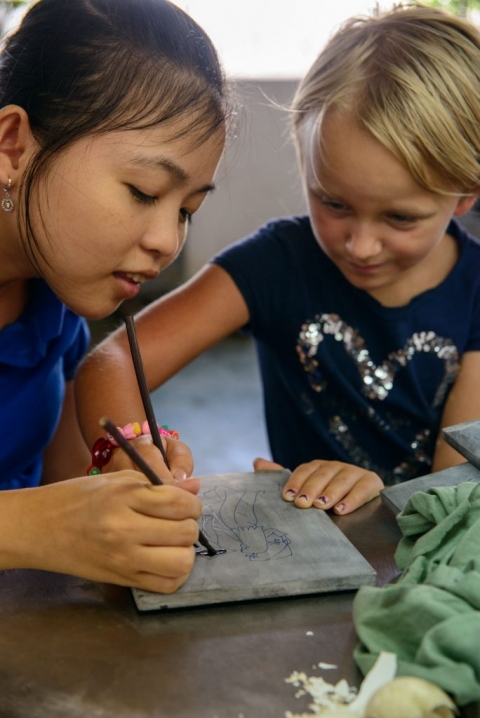 An artist teaching Immy how to create lacquer painting.

What did we buy?

Cough. Well…. I fell in love with the lacquered art as did the kids and we purchased a jewellery box, a picture, some chopsticks, a fan and I’d go back to buy more!

The bonus is that they will ship large purchases for you and you can pay with bank card. 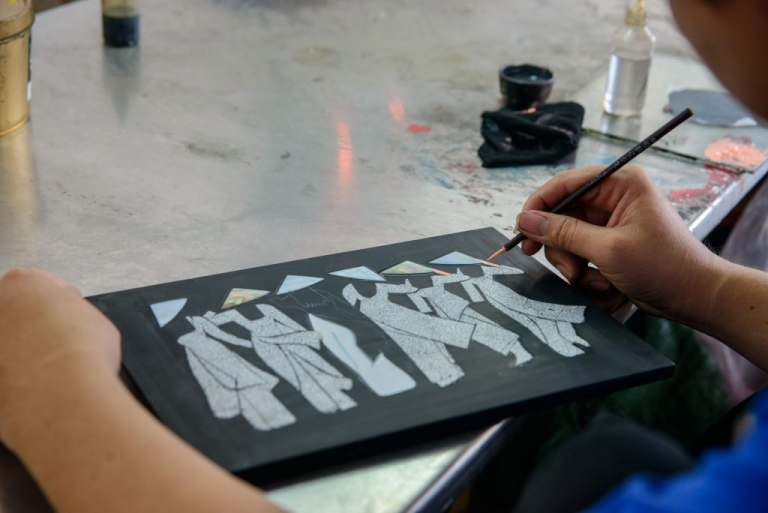 Can you buy it online?

Yes, yes, yes!! It’s wonderful because you can. Head over to the Namquoc website and contact them to place an order. We are so thrilled with our pieces and I would fill our (imaginary) house with loads of the art work because I find it really beautiful.

They ship to twenty-six different countries so there’s nothing stopping you lol. 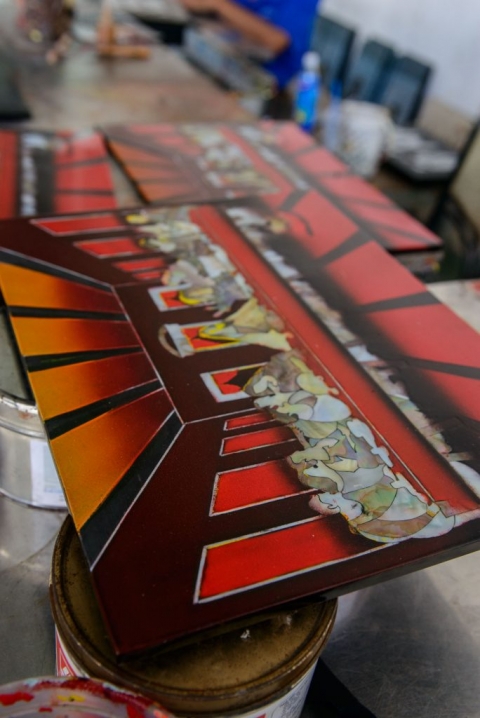 Mother of pearl with lacquer painting 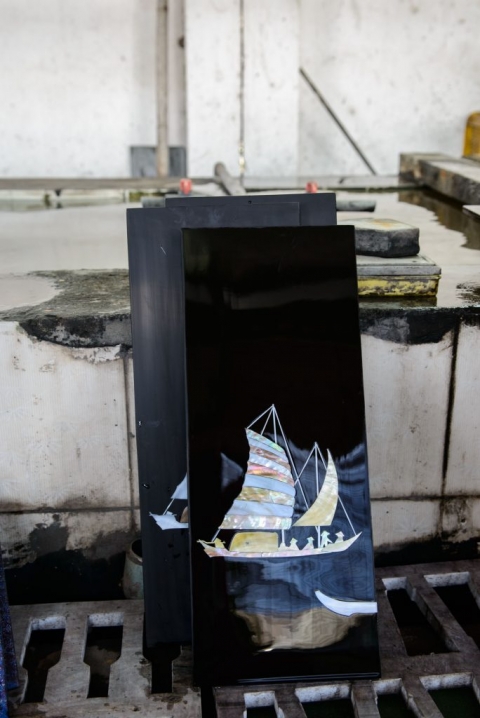 Spread the love
1
Share
1
Share
Posted in Vietnam
« The Cao Dai Temple is so colourful you have to visit! Vietnam
The red zone ghost villages of Sinabung, Sumatra »