Visiting The Cu Chi Tunnels With Kids; How do you fancy living in a tunnel?

If you’re claustrophobic, the Cu Chi tunnels on the outskirts of Saigon are going to be your worst nightmare. Less than 50cm in diameter, these tunnels were once home to Vietnamese fighters and their families for over a decade during the American War.  Read on to know more about why we visited and what you can expect if you visit. 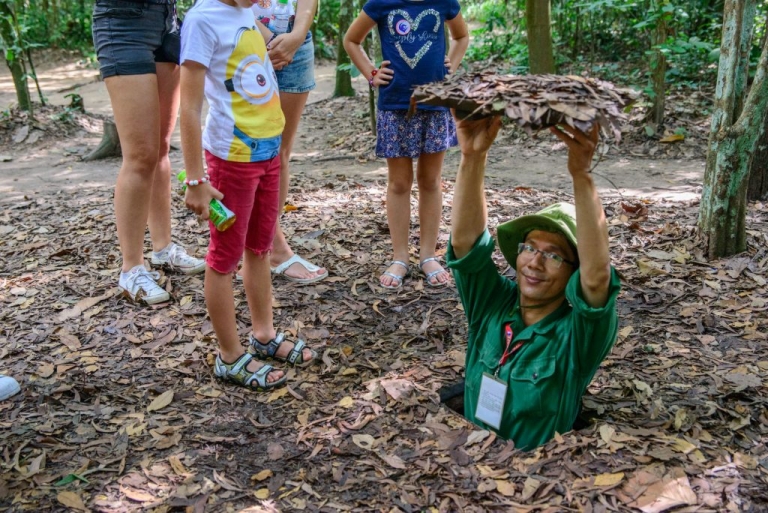 Our Cu Chi tour guide in an original hole

Before I was even born, the Vietnam War (1954-1975) (or The American War as it’s called in Vietnam) had decimated the lives of nearly THREE million people. As a result of the war it’s estimated that some Vietnamese people dug over 120 km of tunnels underground and lived in them for a decade!

We visited the tunnels and other war sites in Vietnam to teach our children that war conflict is unnecessary and to show them the damage that our governments can do (if we blindly allow them to). 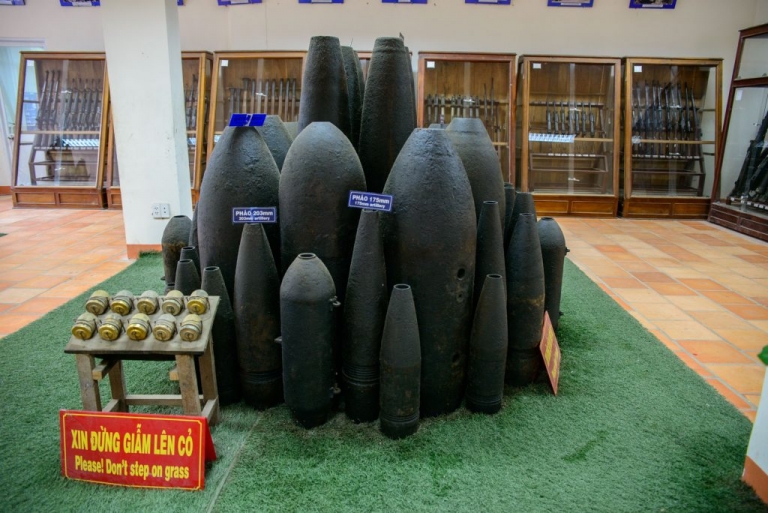 Bombs found with the Cu Chi area – more are still being found.

How Can You Get There?

We booked a tour through TNK Travel and our tour guide was Qwing. She was super nice and spoke perfect English. She was happy to answer all of our questions, all day and was just a really nice, genuine person. The tour started in Saigon city where we were collected.

It cost 2,000 dong (in total for four people) for a visit to an art factory for people who have suffered from the effects of Agent Orange, a visit to the Cao Dai temple, lunch and then the Cu Chi tunnels.

Keep on reading if you want to know how to visit the Cu Chi tunnels alone without a tour. 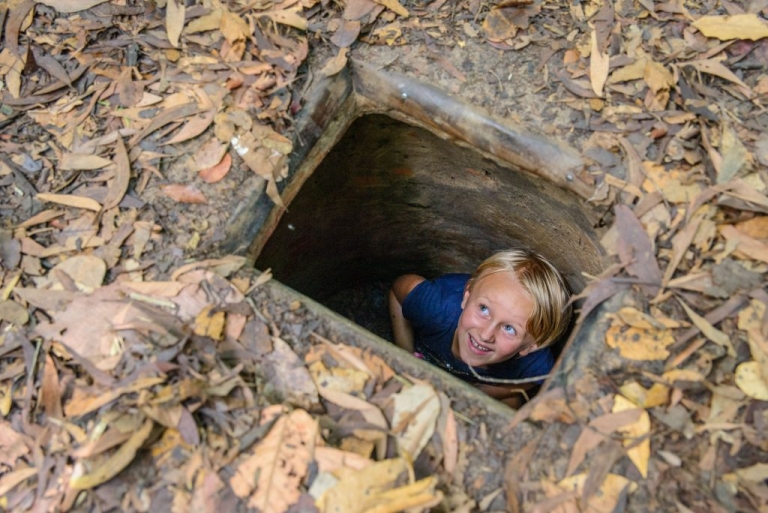 Imogen in one of the holes

Which Cu Chi site should you visit?

There are two tunnel sites that you can visit. Both sites are roughly 60-65km north of Saigon city in a remote farming area. The roads are in average condition and if you’re driving you should expect some pot holes and animals on the road. You can’t drive too fast so do leave plenty of time.

The Ben Duoc site contains the original tunnel system and is about 25 minutes north of the Ben Dinh site.

The Ben Dinh site has had significant tunnel reconstructions and tunnels have been made larger to accommodate tourists. This is the site we visited. It’s obviously the busier of the sites as it accepts tour groups.

Both sites have displays of the different types of booby traps that were used. Underground conference rooms where campaigns such as the Tết Offensive were planned in 1968 have been restored and you also get the opportunity to taste food that Viet Cong fighters would have eaten.

Those Vietnamese were ingenious!

The Vietnamese fighters were ingenious. They made shoes from tyres, they re-used everything the American Army left, they dismantled bombs to use the gun powder, took the radios to listen in…

I was and still am in complete awe of how they managed to survive! 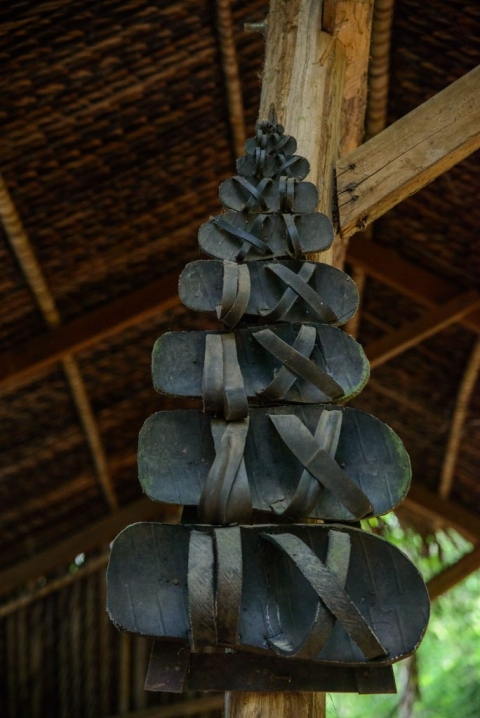 The type of shoes that the Vietnamese fighters would wear

The tunnels are narrow!

The Vietnamese are very slight in comparison to the Americans – something to do with a lack of fast food maybe lol – and those tunnels they dug are narrow! Only a handful of Yanks made it into the tunnels and although they found supplies they never found any people.

I’d have never said I was claustrophobic but those tunnels made me panic and I could only stay down them for a very short period of time.

Not only did they dig networks of tunnels but they also made booby traps. 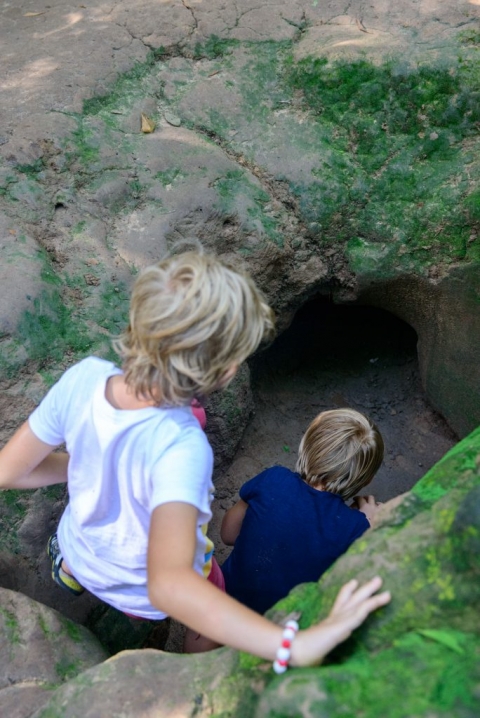 Crouching down to see one of the tunnels

Some of the booby traps

I was enthralled by the booby traps and actually thought they were really wonderful. I don’t care much for war or bullets and bombs but the traps showed tenacity and intelligence and that struck something within me. Probably because I believe that people should have core beliefs and stick to them and that’s exactly what the Vietnamese fighters did and over a prolonged period too.

These guys were ingenious! They created traps from left over American supplies and you know what, there’s not many people that take on the American Army and WIN. 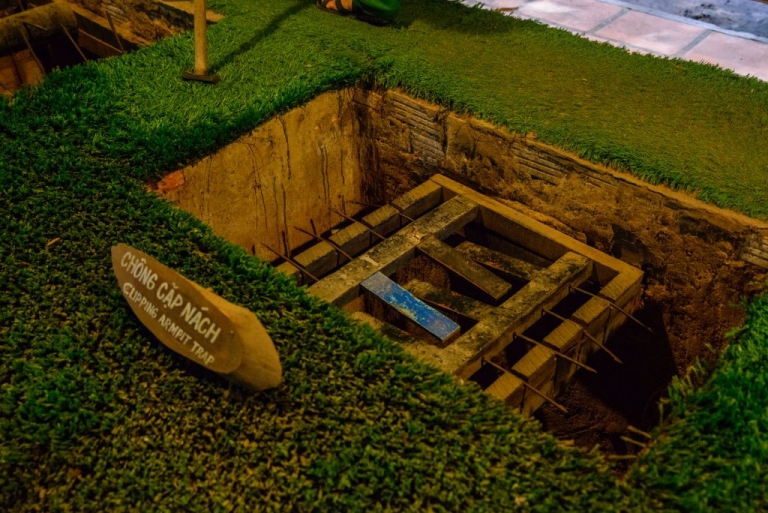 One of the traps called The CLIPPING ARMPIT trap. 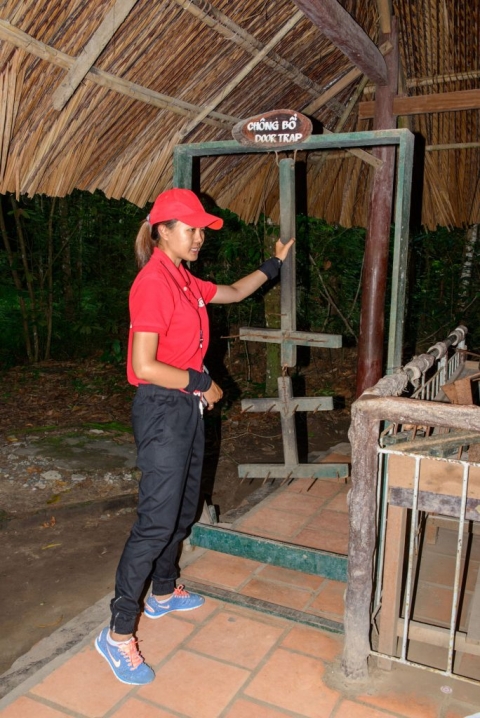 You wouldn’t want to get hit by the DOOR TRAP! 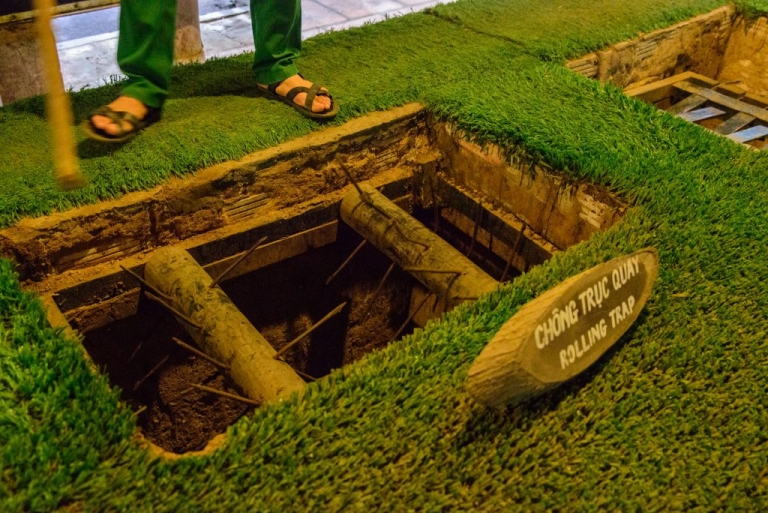 No photos from inside the Cu Chi tunnels

The tunnels were so dark that I wasn’t able to get a photo, plus I needed both my hands to crawl along as quickly as possible so I could get out. I thought it was a horrible experience but the kids loved it and thought it was awesome.

It was maybe not the impression I was hoping to give them lol but they still speak about it now, four months later, and recall how excellent an experience it was. World-schooling for the win! 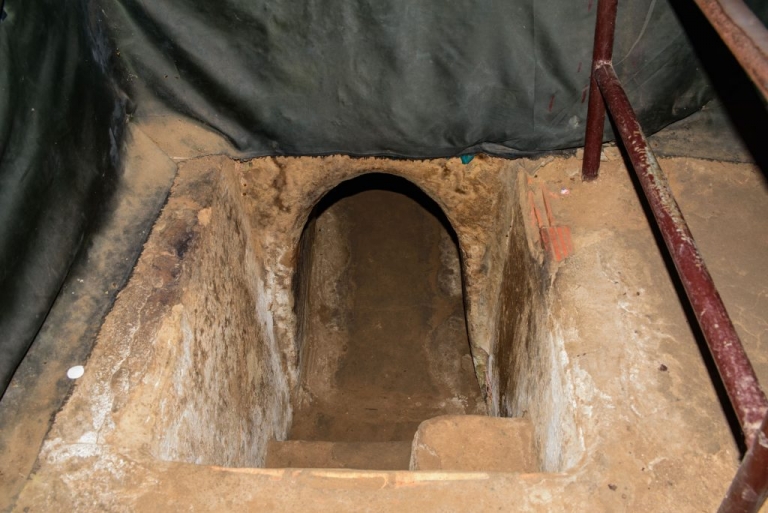 The entrance to the tunnel that we crawled through. Shudder!!

How did they live in the tunnels?

American soldiers used the term “Black Echo” to describe the conditions within the tunnels. Life in the tunnels was difficult. I was only down for 15 minutes maximum and it was sheer hell.

Air, food and water were scarce and the tunnels were reportedly infested with ants, venomous centipedes, scorpions, spiders and rats and mice.

Soldiers would spend the day in the tunnels working or resting and come out only at night to scavenge for supplies, tend their crops or engage the enemy in battle. Sometimes, during periods of heavy bombing or American troop movement, the fighters would be forced to remain underground for many days at a time.

Sickness was rampant among the people living in the tunnels, especially malaria, which was the second largest cause of death next to battle wounds.

How they lived under there is phenomenal and it’s incredible that they not only survived down there but that they won! 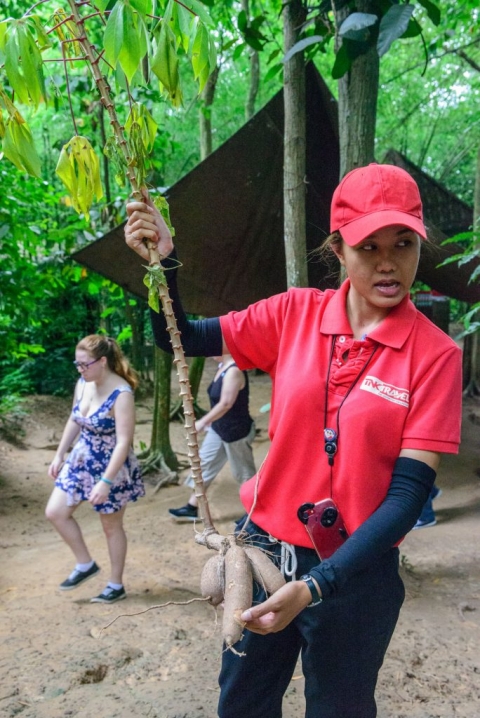 This is mostly what they ate; TAPIOCA!

How long will it take Vietnam to recover from the war?

Due to the amount of land mines and bullets left by the American Army, the Vietnamese Government thinks it will take them another five-hundred years to recover and reclaim the land to its original state.

Every year in the local areas there are more deaths – usually children’s lives – lost to playing in woods/forests or working in the fields and accidentally stepping on land mines.

The effects of Agent Orange are very evident within this area of Vietnam and sadly the effects are being passed down to the next generations. Children are currently being born with horrific disabilities as a result of those chemical attacks forty years ago. 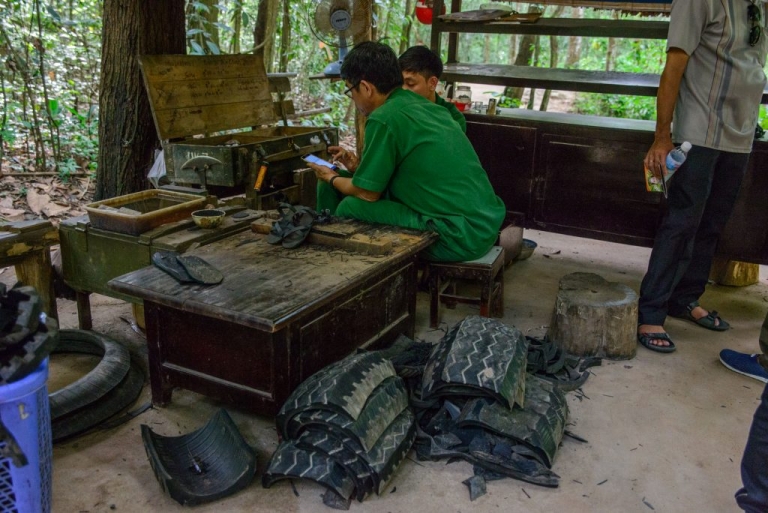 Why would you have a shooting range?

I find it incredibly disrespectful to the people who lost their lives there that a shooting range would ever be considered a good idea!? I am totally perplexed by it and I feel quite insulted.  Aren’t their enough problems in this world without adding more gun violence?

There’s a certain irony that they’re STILL using bullets left over by the American Army though. 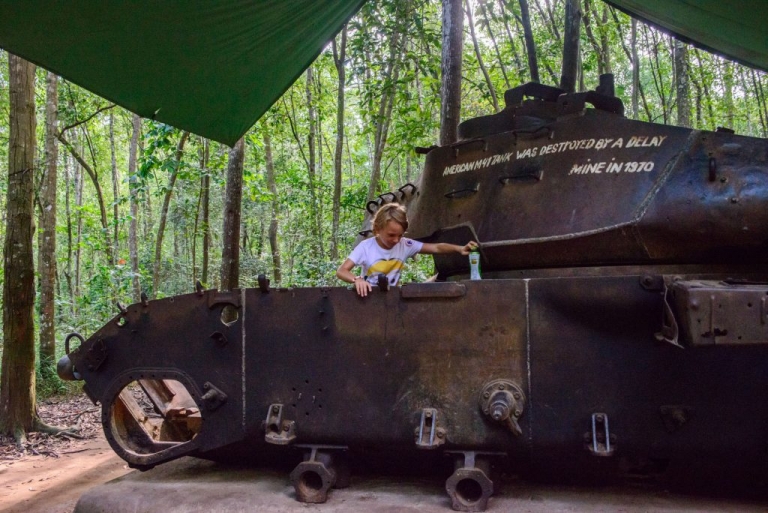 Some reviews suggest it isn’t worth it. I disagree

I’ve read some reviews suggesting that the Cu Chi Tunnels are a waste of time visiting and that you shouldn’t bother.

The American War is such an enormous part of modern Vietnamese history and as a result Vietnamese culture, that you should definitely come and visit the tunnels.

Why would you not want to understand that? 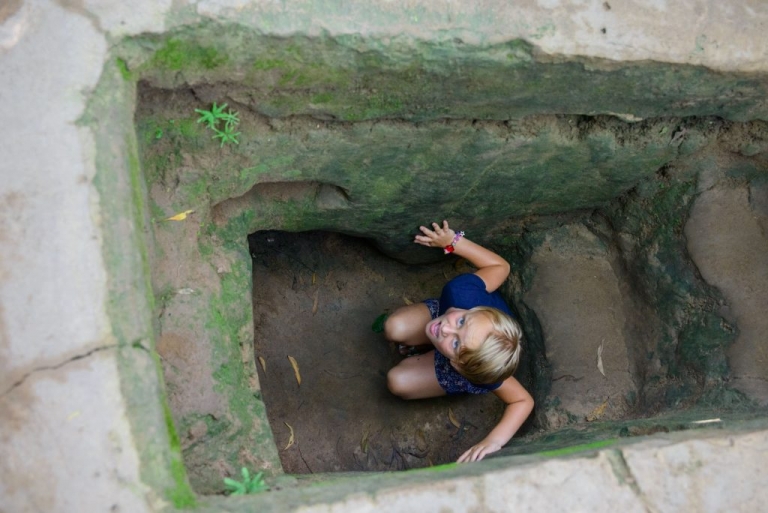 How To Do This Tour Yourself

The Cu Chi Tunnel website says they’re open between 7am and 5pm but I would check this. There’s a number you can call on the website.

See above for the map on where the two tunnels are located. 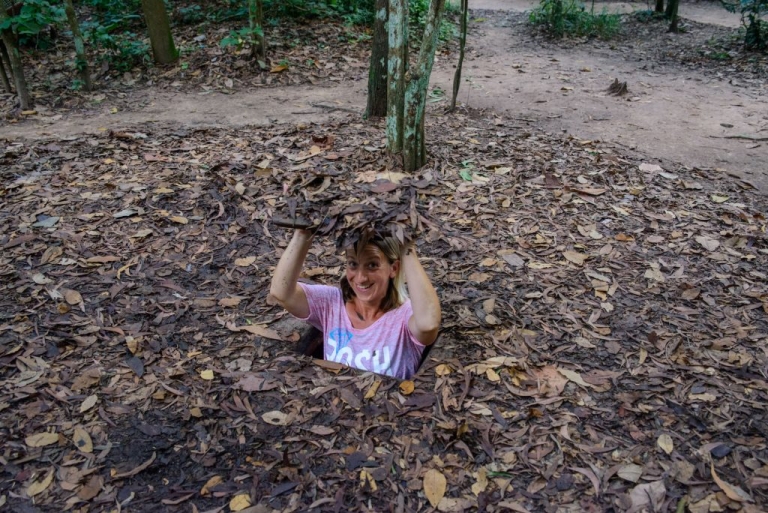 Me trying out a hole for size.

Pin this to your Pinterest board and read it later

What Else Could You Do In South-East Asia?

Spread the love
2
Shares
2
Shares
Posted in Vietnam
« Go to the Teh Dar Show Saigon
Off the beaten track in Siem Reap: Triple A Tour »