Only a handful of daredevil adventurers have been to see these ghost towns! If you want to see an erupting volcano and visit some red zone, ghost villages, then you’ll need to visit Mount Sinabung in Sumatra.

Read on to see how! 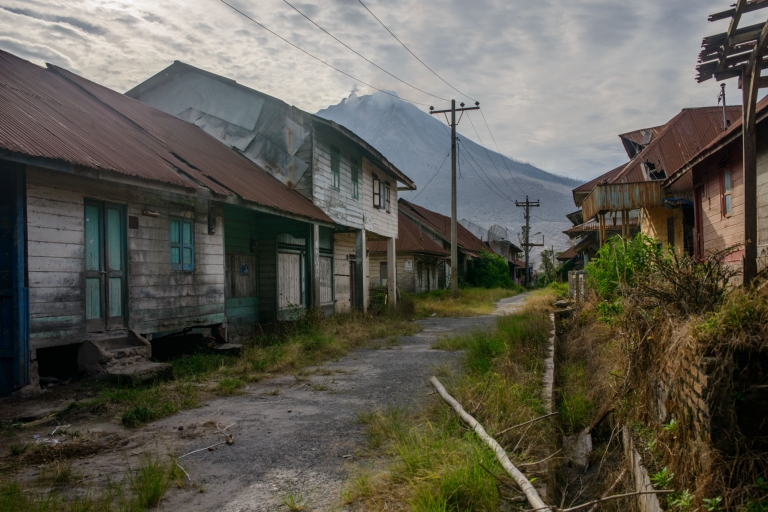 A ghost village underneath the smokey Sinabung volcano

Where on earth is Sumatra?

Sumatra is the most northerly island of Indonesia. It’s home to rain forests, palm oil plantations, tons of wildlife and quite a few volcanoes. Thirty-four to be precised. In fact Indonesia has over one hundred and twenty volcanoes as it sits on the ring of fire. 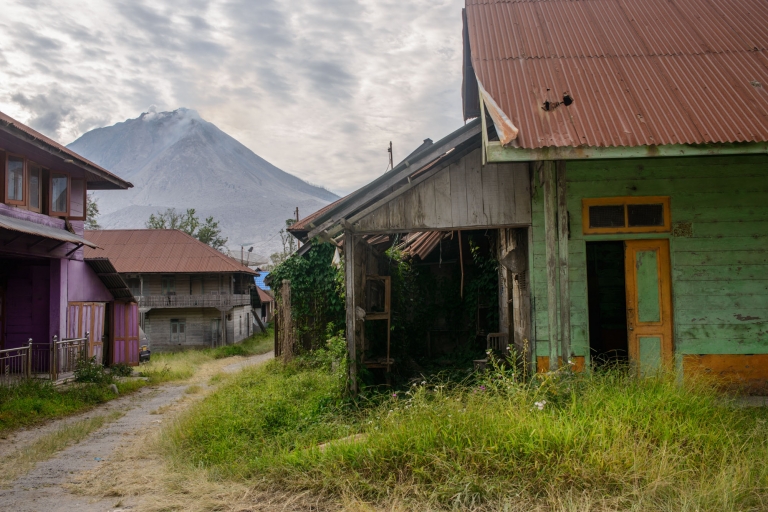 How can you get to Sumatra?

Due to the size of the island, flying will be your best way of arriving although you can arrive by ferry too. International and internal flights are regular but always delayed.

We were already in South East Asia and we flew from Penang in Malaysia to Medan, Sumatra. It was a very short flight of about forty-five minutes although we were delayed by three hours!

You can also fly in from Jakarta, Indonesia’s capital. 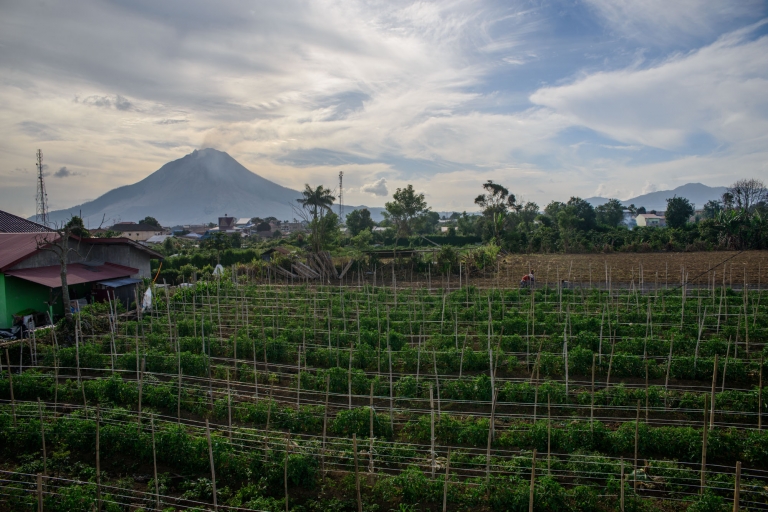 Crops growing on the soils of Sinabung

How can you travel around?

The roads are in a pretty shit condition and the quality of driving is not wonderful. However you decide to get around, it will take ages and you’ll need to be patient. Sumatra runs on its own clock irrelevant of what you want lol.

Public buses are cheap (and don’t always run to any schedule) and you will be exploited by the driver and he’ll charge you more than the locals but that’s just how it works there. You either accept it or don’t catch a public bus.

Tourist buses are much more frequent and tend to have set prices although do be prepared to be overly squashed into 4x4s if there’s not enough people to fill a mini-bus. I never saw a car seat my entire time in Indonesia and if you ask for one you’d probably be met with looks of horror. 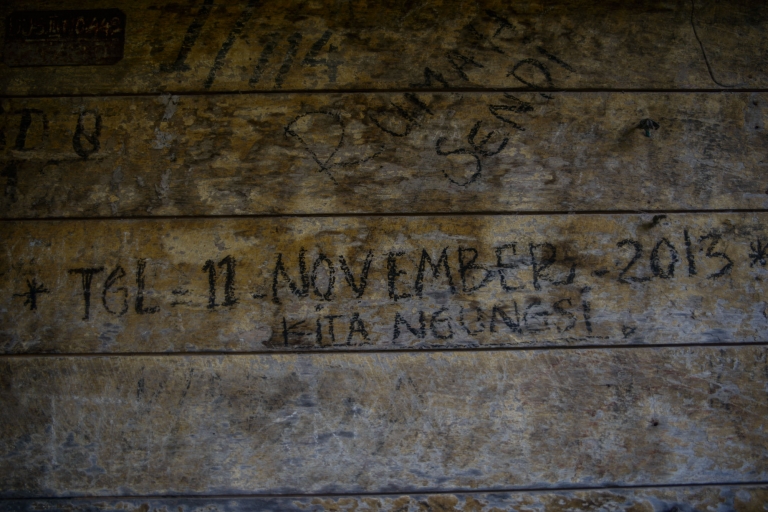 Date of the first explosion

Sinabung is the name of one of the active volcanoes near Berastagi and there are several that are active. After flying into Medan we took a tourist car down to Berastagi. It cost us roughly 600,000 rupiah in total.

Since 2010 the volcano has been active after four hundred years of laying dormant.  In 2013 it unexpectedly erupted and spewed lava fourteen thousand feet into the air!  Sadly it resulted in the death of sixteen locals and over thirty thousand residents were forced to evacuate their homes. The volcano entirely buried the villages of Bekerah in 2013 and Suka Meriah in 2014.

The 4.3 mile area around the 8,070-foot volcano was declared by the government to be too dangerous an area to inhabit and many locals have been too scared to return. This area, the Karo district, is described as being in the ‘red zone’. A few of the local inhabitants do return during the day. They’re not supposed to stay there overnight but we suspect some do. 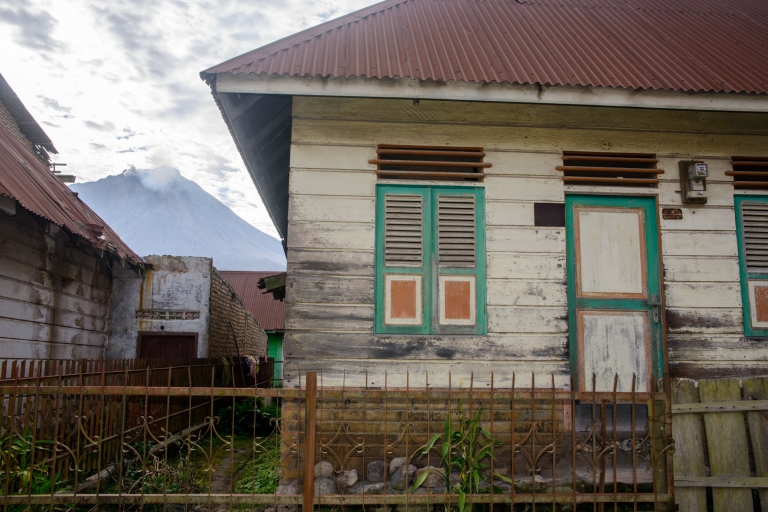 Sinabung puffing away in the background 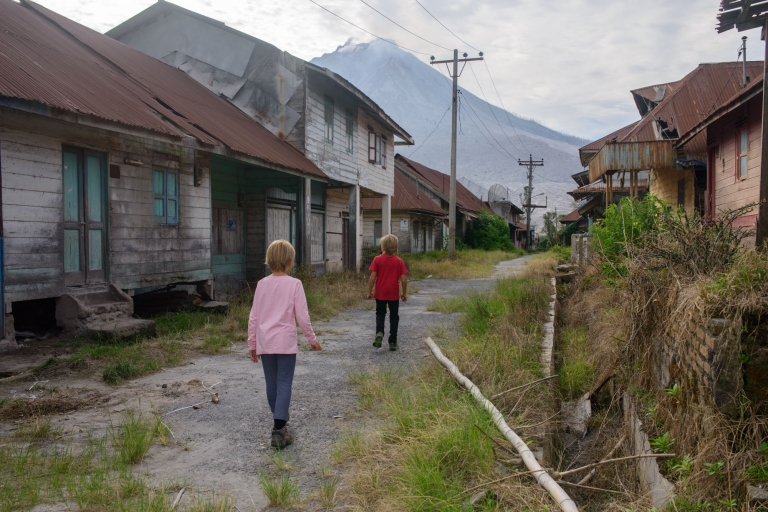 The kids exploring the streets

How can you get to the ghost villages?

You can drive yourself or get a tour guide to take you.

We booked our tour through Awan from Talitha Guest House and I absolutely do NOT recommend that you use him. He got drunk on our tour and really scared the kids. 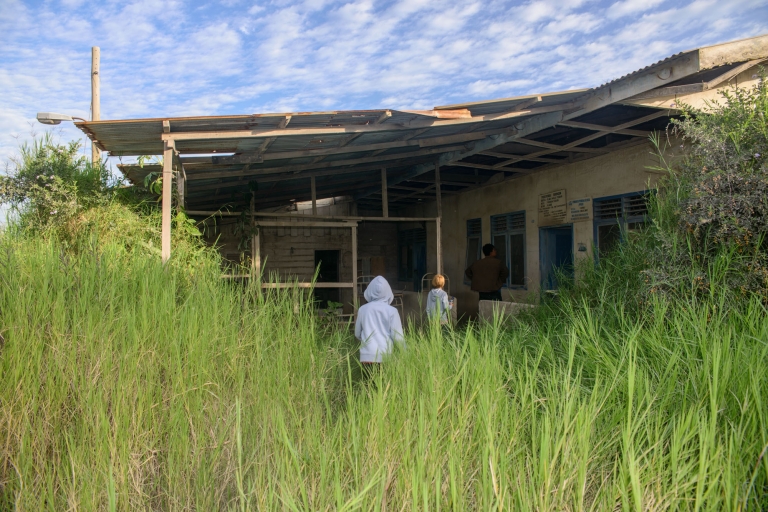 Which villages are now empty? 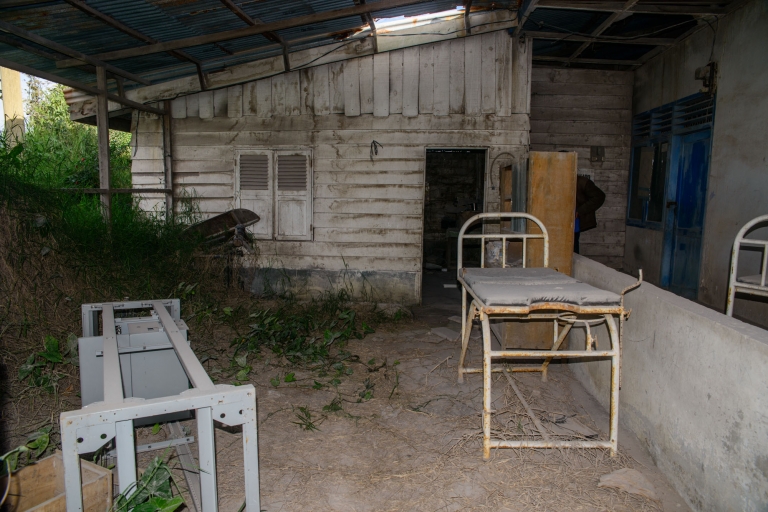 Inside the old medical centre 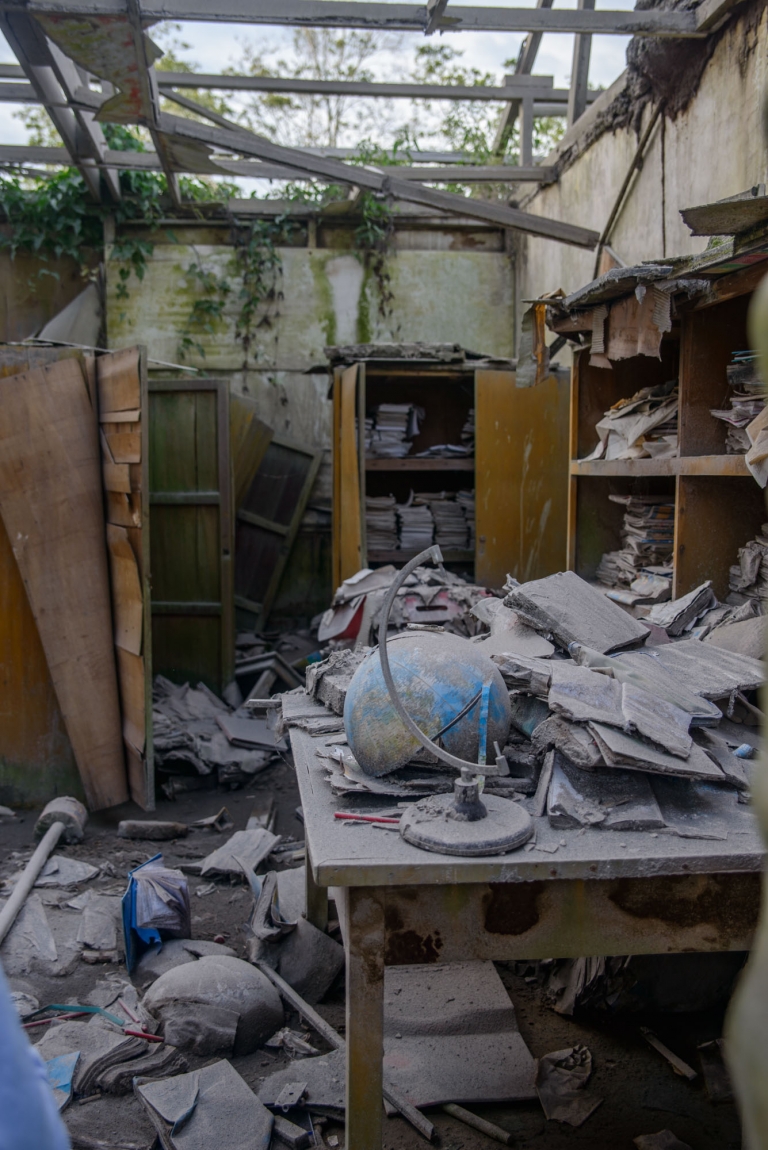 You can always see Sinabung puffing away in the distance but it’s a measured risk. If it had been spewing out lava we wouldn’t have gone but it had only released gases and we thought it was relatively safe. Plus we took a trip to the geology-seismic centre earlier in the day and they said that they were relatively certain it wouldn’t erupt that day.

There is a warning alarm that will go off if the volcano dangerously erupts and there are many street signs advising of the evacuation roads to use in case it does. 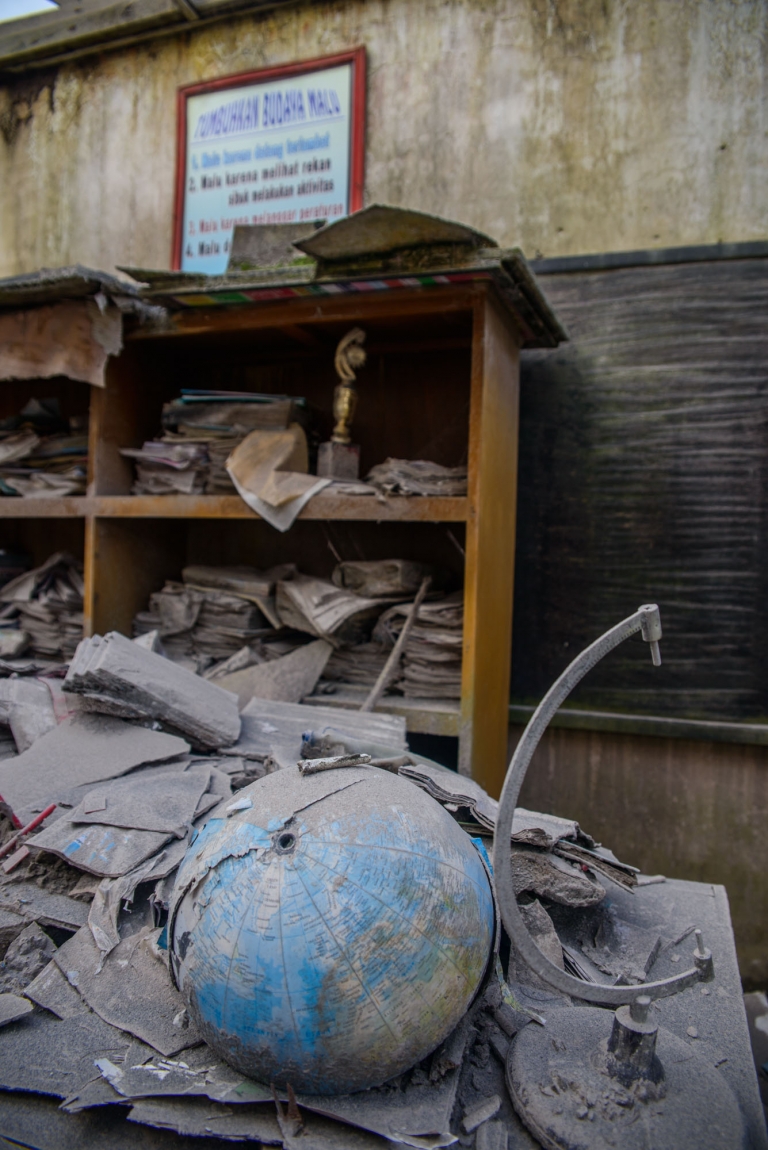 Inside a school that was covered in ash

What can you see in this abandoned town?

This village used to be full of farmers carving out a living on the super fertile slopes on Mount Sinabung. All that remains here is dust-covered furniture, houses overgrown by vegetation, crumbling houses and old possessions caked in volcanic ash.

It is interesting to see how nature has reclaimed the land but from a slightly morbid perspective. I felt uncomfortable that we ‘trespassing’ on people’s land and benefiting from their misfortune. 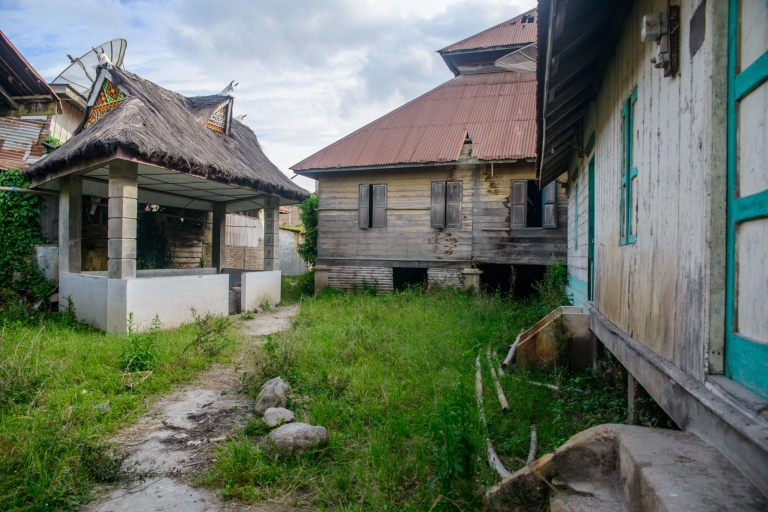 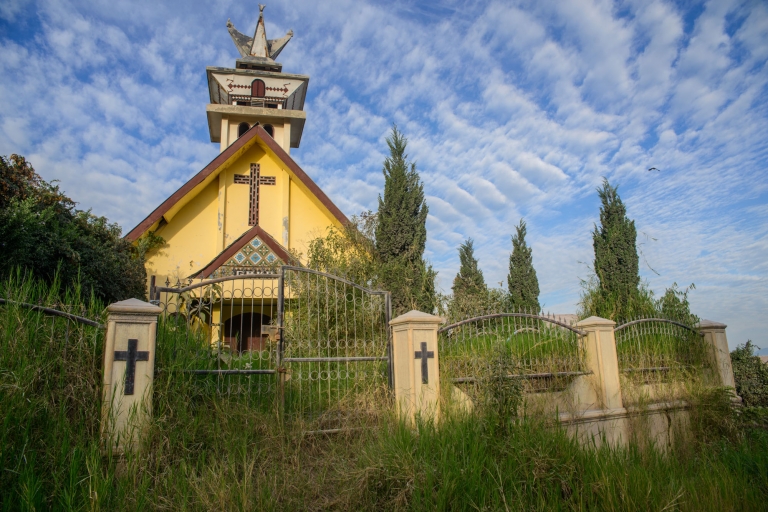 The pyroclastic flow from the eruption ripped through the nearby countryside as it raced down the steep slopes at 450mph, burning up anything that stood in its way. Whole swathes of trees and land were swallowed up and the heat created what now looks like a river bed. 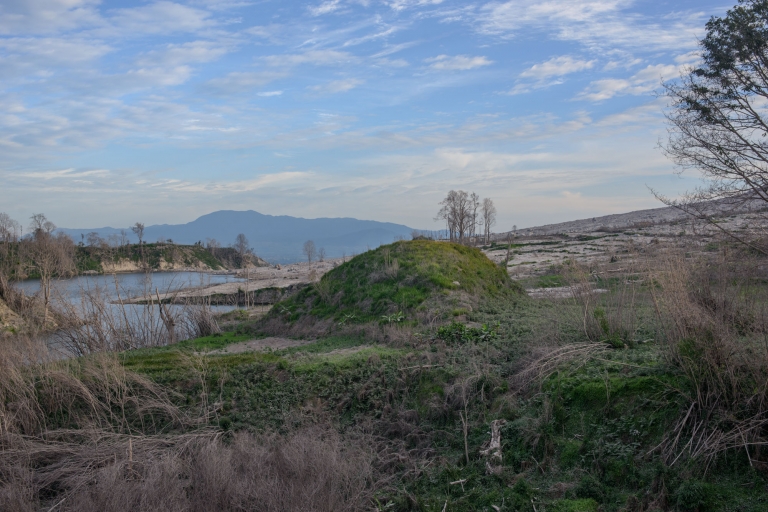 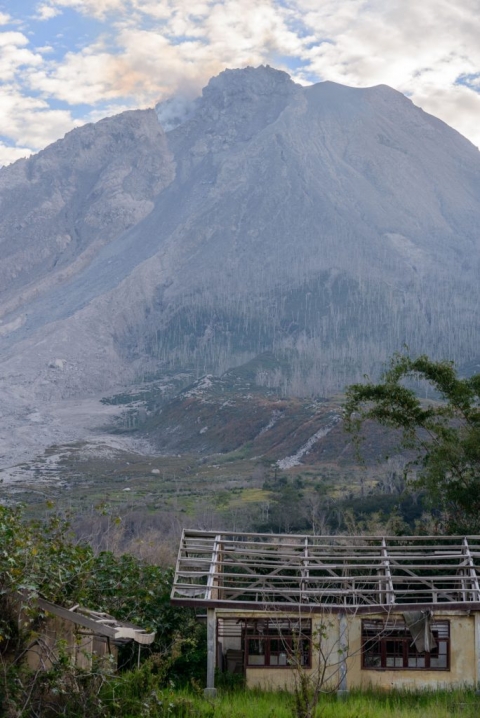 What you can expect from visiting

It was a very surreal experience for us being there; exciting but fearful and reticent at the same time. It was as if the volcano had stopped a moment in time, frozen it but carried on decaying it too.

The village we visited was an affluent community and the primary school, kindergarten and medical centre reflected this. To see the kids’ text books stacked yet crumpled in the shelves and covered in grey ash was saddening. It was the first time I’d ever seen a play park slide, covered with grass, weeds and ivy. You got the sense that something really awful had happened here but it was intriguing to see the way nature had eaten away signs of humanity.

When communities, friends and families were re-homed, it was not together and our guide said that many had suffered with depression since. Families had been stripped not only of their homes but also of their businesses and any chance of making money. I didn’t ask about social benefits and security in Indonesia but I got the distinct impression that they weren’t covered if self-employed or unemployed. 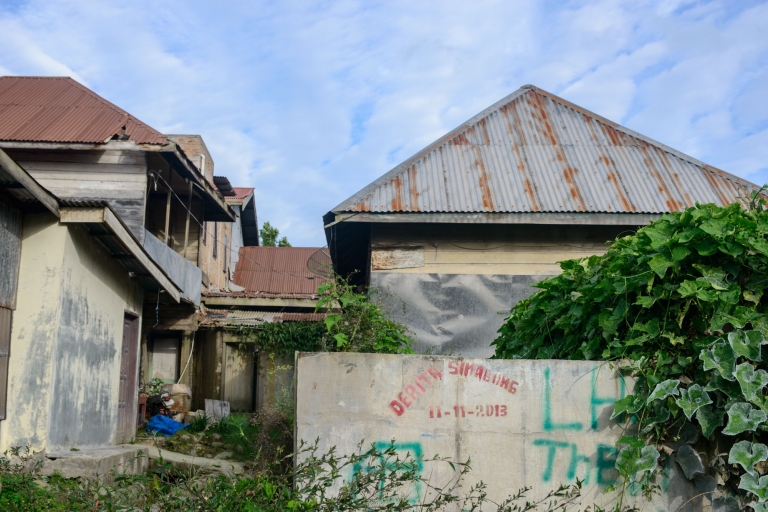 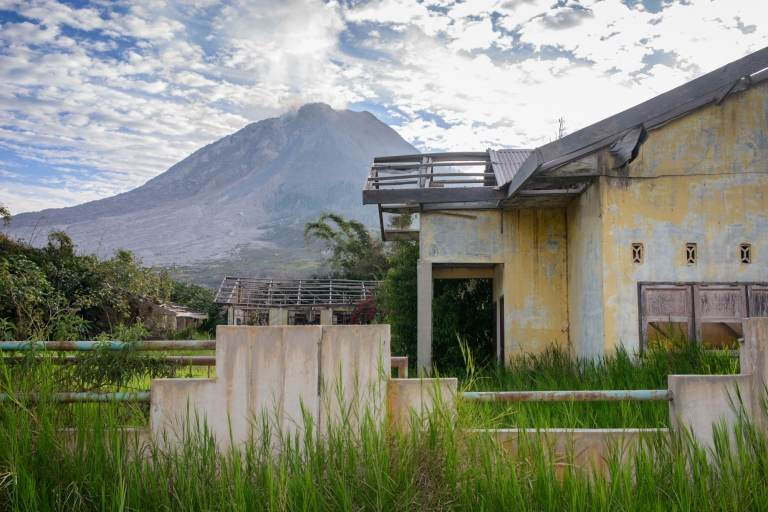 If you want to read this again, add it to your Pinterest board