If you’re looking for something a little bit adventurous and sporty to do in Kotor and want to beat the tourists, you should definitely consider hiring a canoe and spending a morning on the Bay of Kotor! This post is all about how you can canoe the bay of Kotor & those glorious turquoise waters 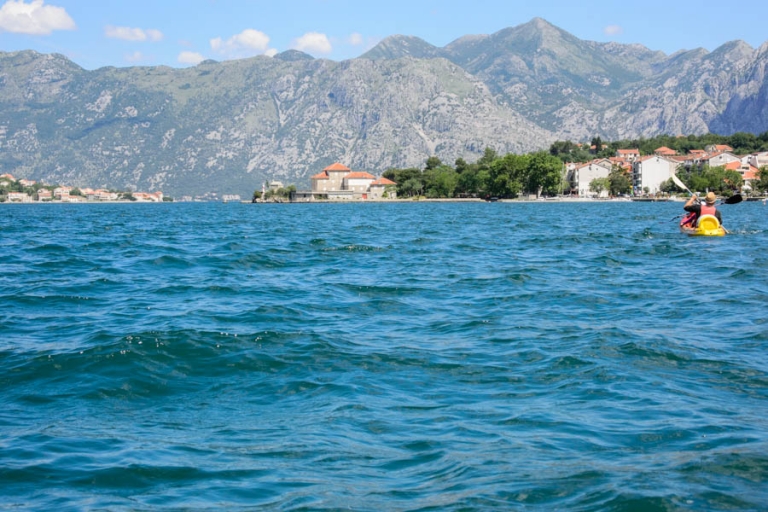 Out on the water: How to canoe the bay of Kotor & those glorious turquoise waters

How to canoe the bay of Kotor

After visiting Kotor’s old town and then climbing 1350 steps (in the sweltering heat) to the San Giovanni Fortress Walls and being faced with the other gazillion loud and irritating tourists who also had the same bright idea, I fancied spending some time on those beautiful tranquil waters of Kotor Bay.

But how? Who with? I set about finding somebody who could take our family of five out onto the bay. 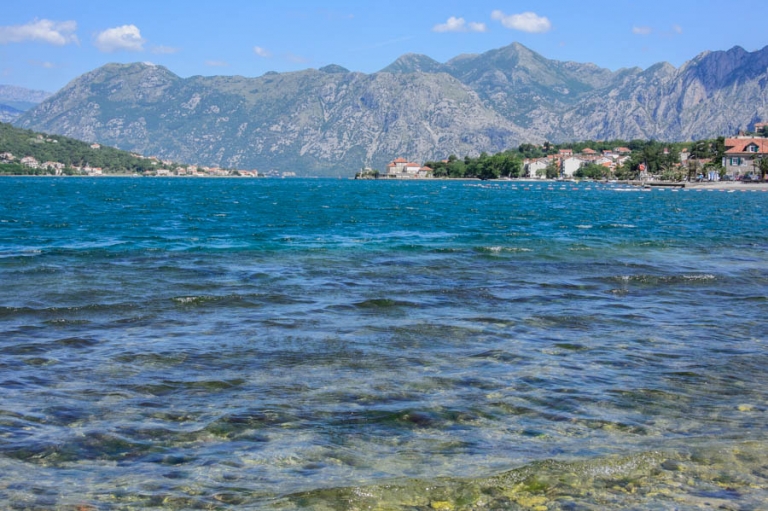 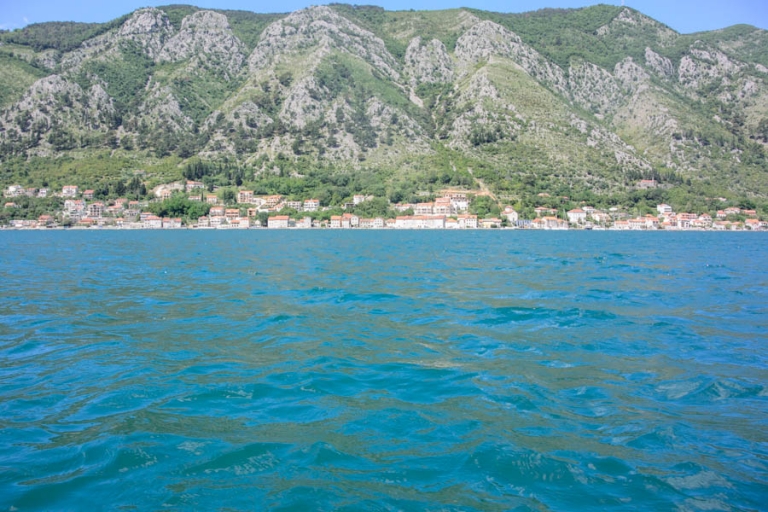 Which company did I find to canoe the bay of Kotor

After a bit of hunting I found and chose Adventure Montenegro who are based just inside the old walls of Kotor.

No previous experience was needed to canoe the bay however they advise that you’ll need to be fit enough to paddle about 6-9 kilometres.

Although the Bay of Kotor is a sheltered bay and generally the canoeing is described as relaxed, it does depend upon which way the wind blows. If it’s against you, you might need to paddle harder!

For our family of five this expedition cost €140 and took us about 4 hours. 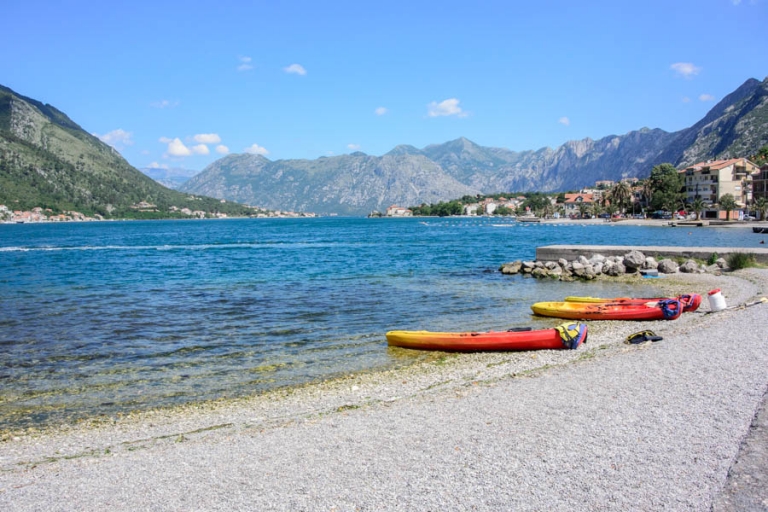 How to canoe the bay of Kotor 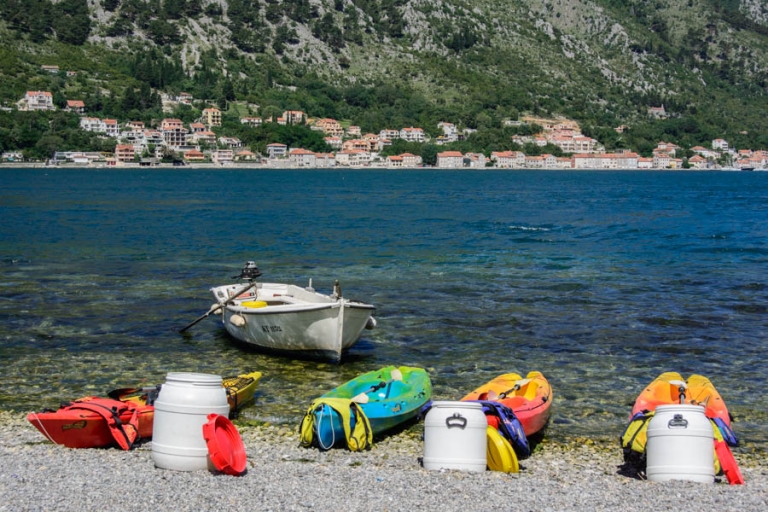 Photographing with the Nikon AW1

I am absolutely not, never ever, going to take my ludicrously expensive cameras and lenses on a canoe. Never.

The following shots and video were taken with the Nikon AW1 underwater camera. Whilst it is a fantastic little camera for under the water, I find it difficult to use out of water and I’m not overly keen on the colours it produces.

But hey, it’s waterproof and that’s what matters on a canoe! So all of these photos have been taken with the AW1. 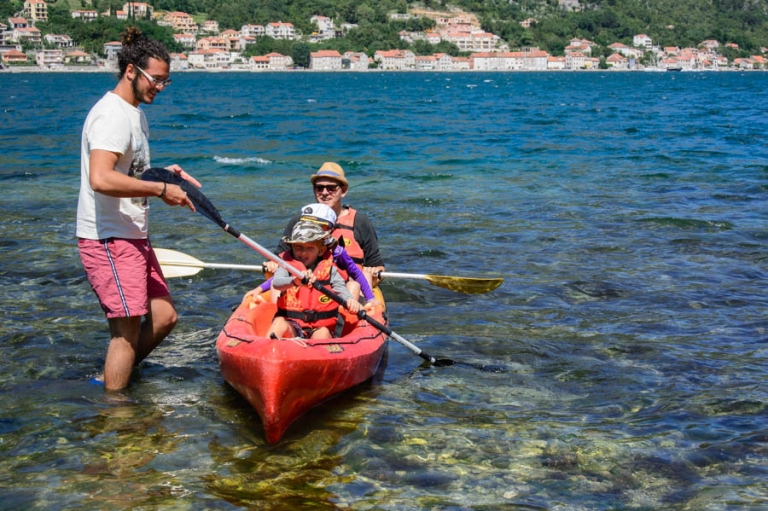 Rich and the kids in a canoe 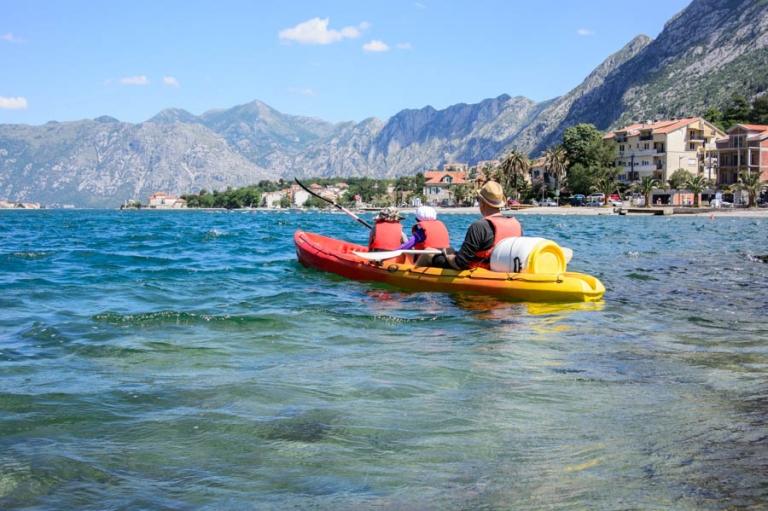 Meet your guide, The Wolf

I can’t remember his name in Montenegrin (Serbian) but it translated to Wolfy in English which we thought was cute and funny!

He was a lovely young guy who had a lot of pride in Montenegro. Actually a trained stone mason, during the winter months he restored and rejuvenated Kotor’s old buildings. You can see the newly restored buildings dotted along the inlet and they’re truly a work of art but now costing millions of euros (new Russian money) they’re not for us mortals! 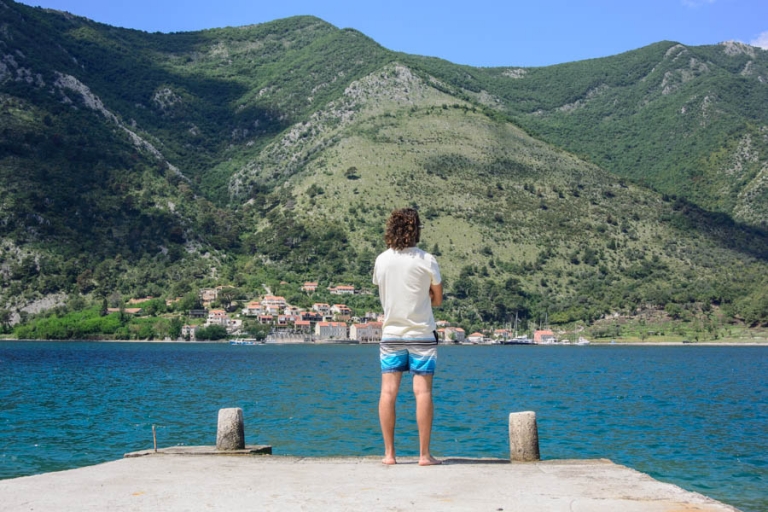 The wolf must be shy! 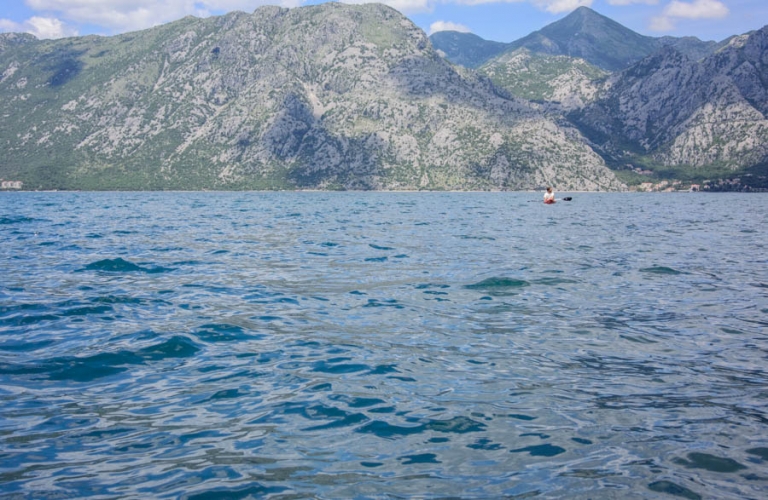 All aboard the kayak

Rich and the two younger kids took one canoe whilst Sophie and I took another. Leaving from the pier near the main car park in Kotor, we hit the water and that pounding sun. The sun starts rising in the summer months from 6am and doesn’t set until at least 7pm.

That means you’ll get, on average, about 13 hours of sun per day!  You’ll definitely need a hat and some long sleeves to protect you.

We left with a sense of wonder and enthusiasm, not to mention energy (although that diminished towards the end of the day). 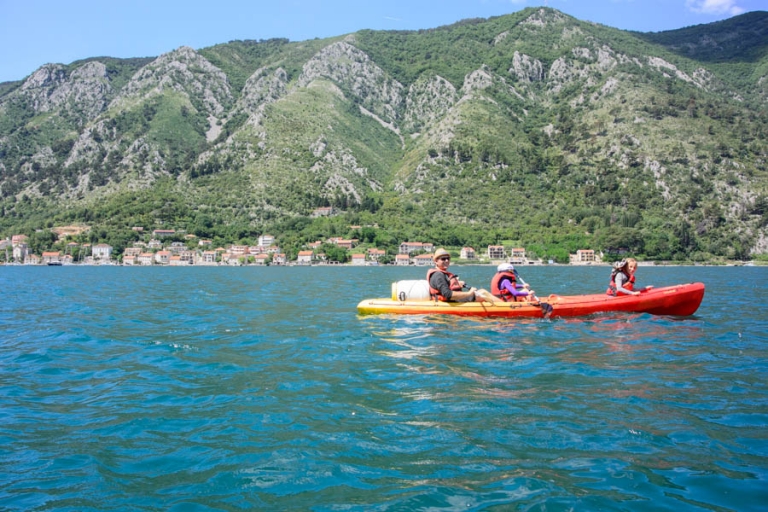 The kids and Rich on the kayak 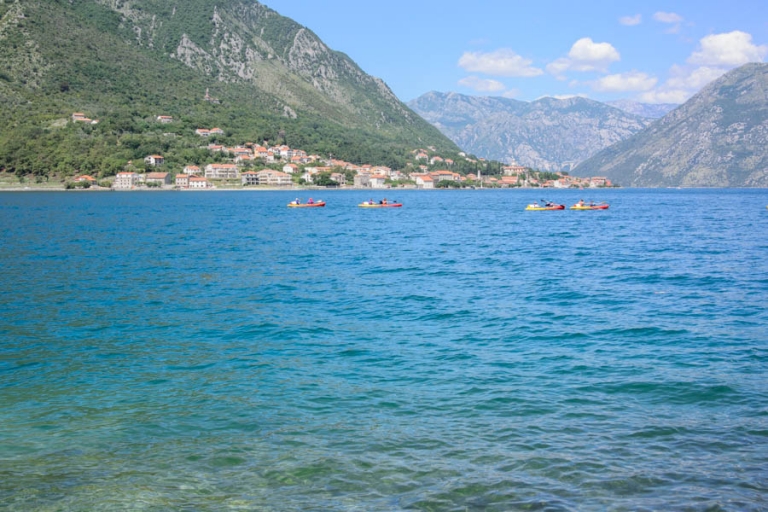 Other people out for a kayak tour

Prepare to be overwhelmed!

We were totally blown away by Montenegro’s beauty and to have those towering mountains surrounding the coastline dotted with pretty waterside towns, it was pretty overwhelming.

It was beyond words to describe this kind of beauty and it’s something you definitely need to experience for yourself. With its magnificent coastal churches which rise above the villages and the vistas over the bay, you definitely wouldn’t be disappointed. 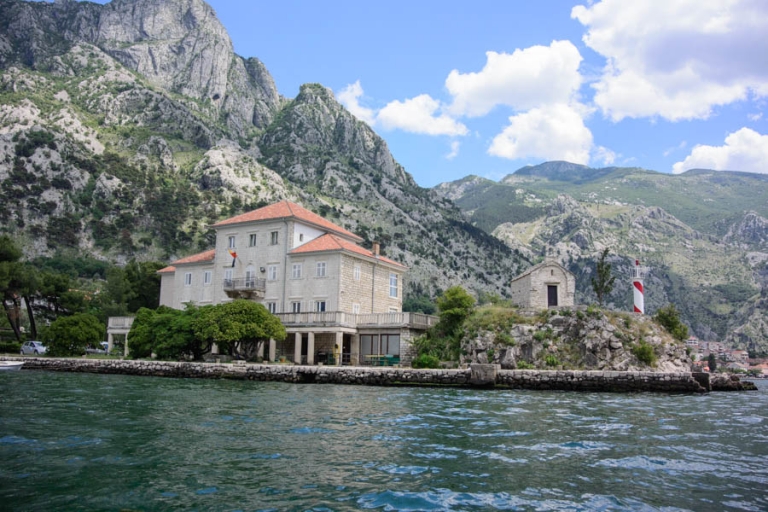 One of the many stone villages dotted along the inlet. 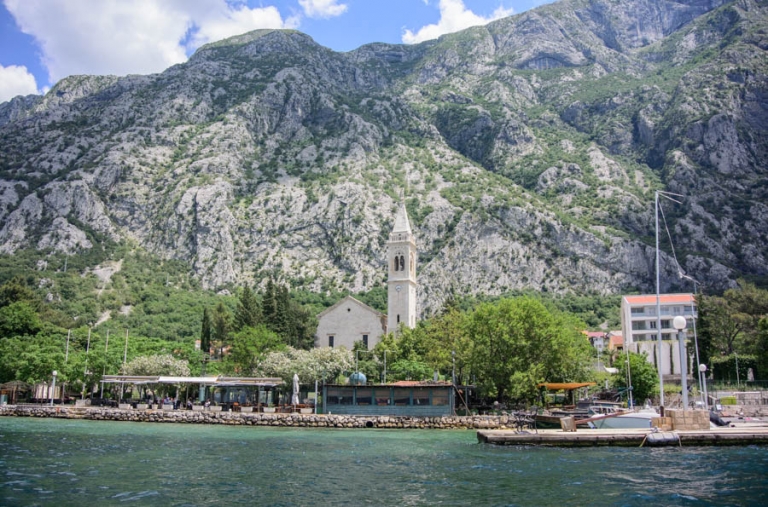 This could be Norway!

If the stone villages were painted red (and of course it was 15*c cooler) you could absolutely believe that you were in Norway. It is the only other country I’ve visited where I’ve had to catch my breath around every corner for its sheer beauty. 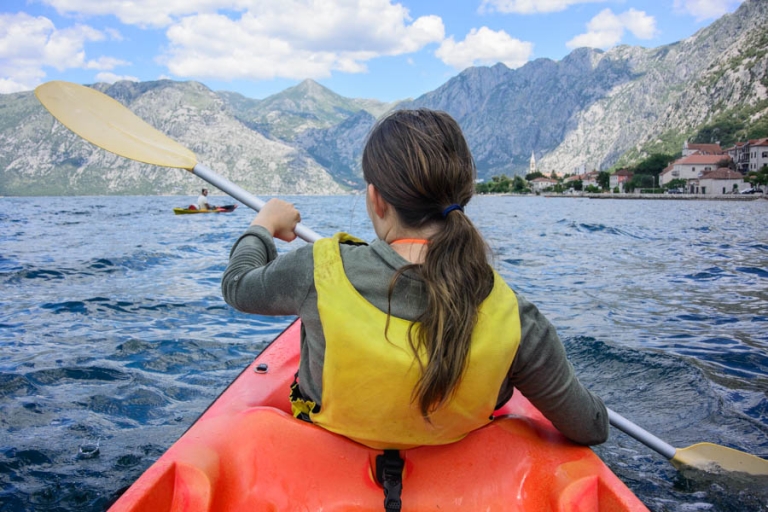 Sophie, our eldest daughter, canoeing the bay of Kotor.

Where will you stop first?

We stopped about half way down the bay in a place called Dobrota where the waters are remarkably transparent and warm.

Here we got the opportunity to swim off the jetty, snorkel close by and simply enjoy being surrounded by great beauty. Oh and have a snack or two! Canoeing is HARD WORK!

We managed to see quite a few fish and even something we’d never seen before. At first we thought it was an un-curled sea horse but it transpired to be a pipe fish! 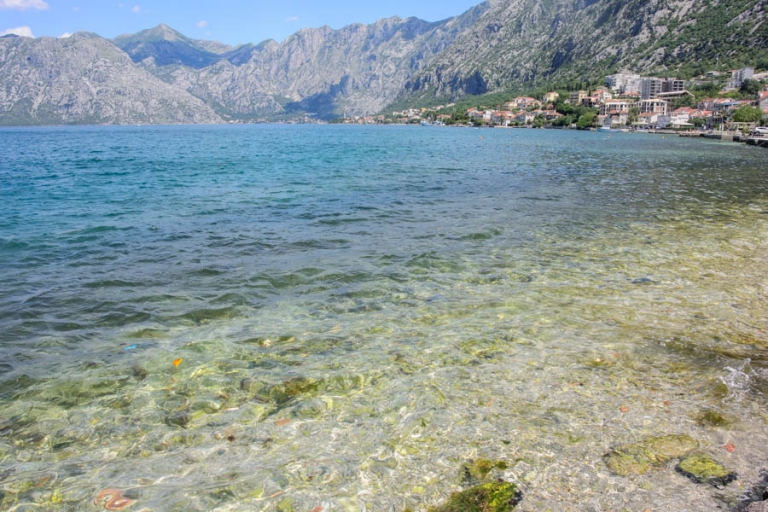 Can you make it all the way down to Ljuta?

Whilst we still had some energy Rich and I insisted that we head down towards Ljuta.

In hindsight, this was probably a little bit too far and by the time we arrived we were showing signs of tiredness and still with the entire length of the bay to canoe back up.

The Wolf was great though and although most of the time we stuck within 100-200m of the shoreline we did have an opportunity to paddle far out. At one point the plan was to cross the bay to a village called Prcanj but the wind was really against us and we felt it would be too hard. Boo! 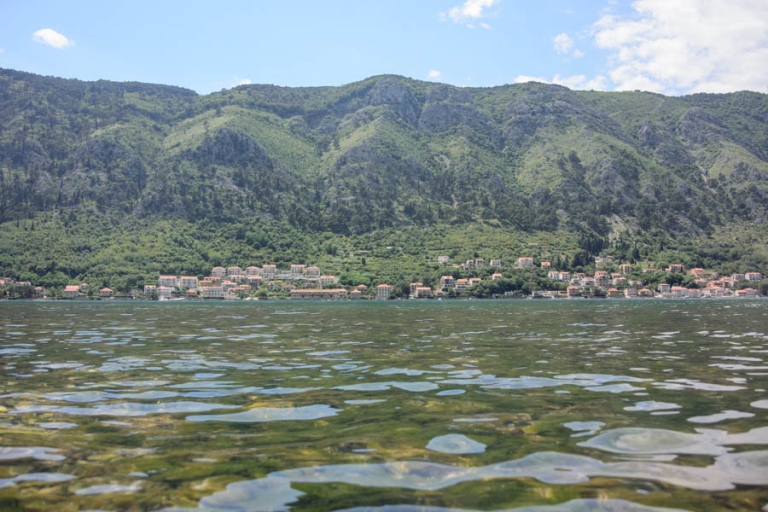 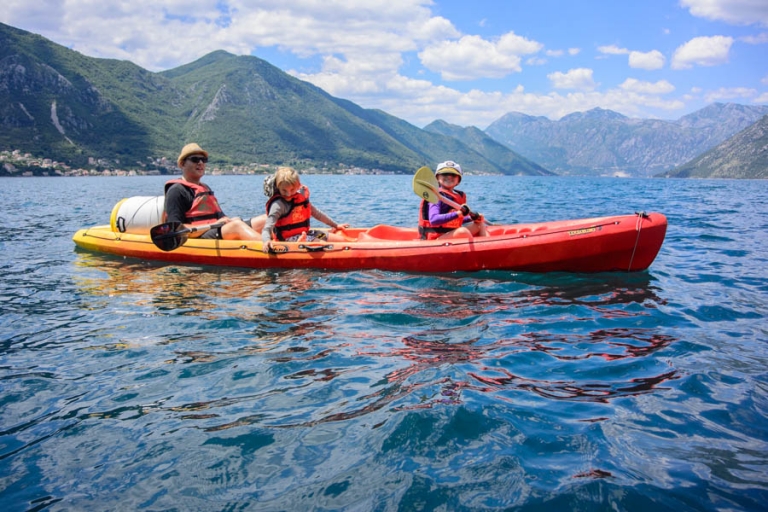 Learn all about the local legends

What we really enjoyed was having the chance to speak to The Wolf who shared his stories of growing up in the bay region and his local knowledge was invaluable on explaining local legends, the history of landmarks and even a few myth or two.

One myth he told us was of the tre sorelle (the three sisters) – you’ll have to go on the tour to hear that one though lol.

Over four hours he talked about the origins of the abandoned buildings, how new money is helping to restore these dilapidated old houses but also how it is pricing local Montenegrins out of the housing market. 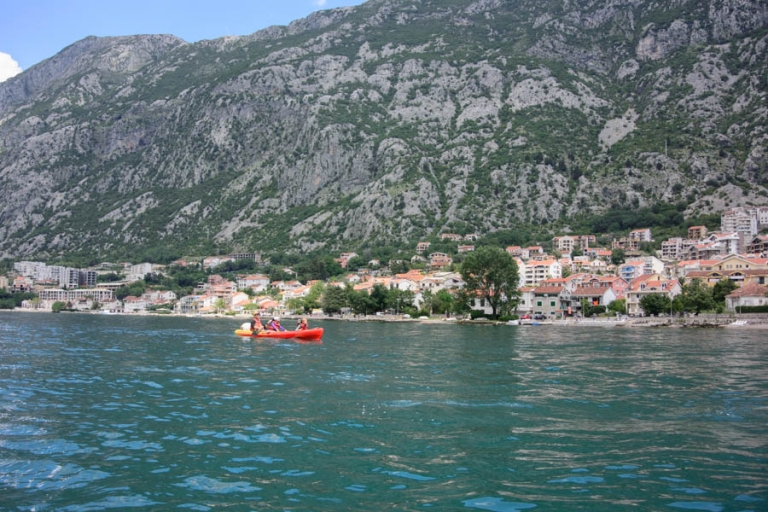 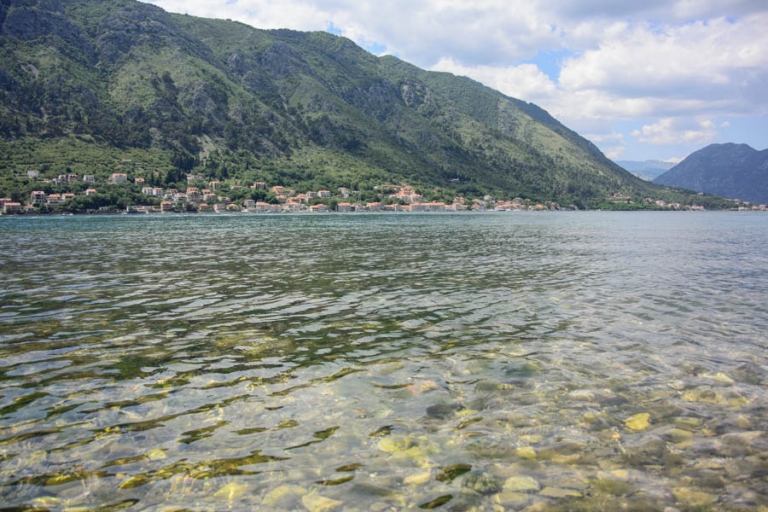 What a great afternoon!

We had a fab afternoon and although we were pretty pooped by the time we returned to Kotor, we felt invigorated and even managed a short walk around the Old Town afterwards.

If you’re looking for something different to do that gives you a really different perspective of the area, kayaking is definitely for you. 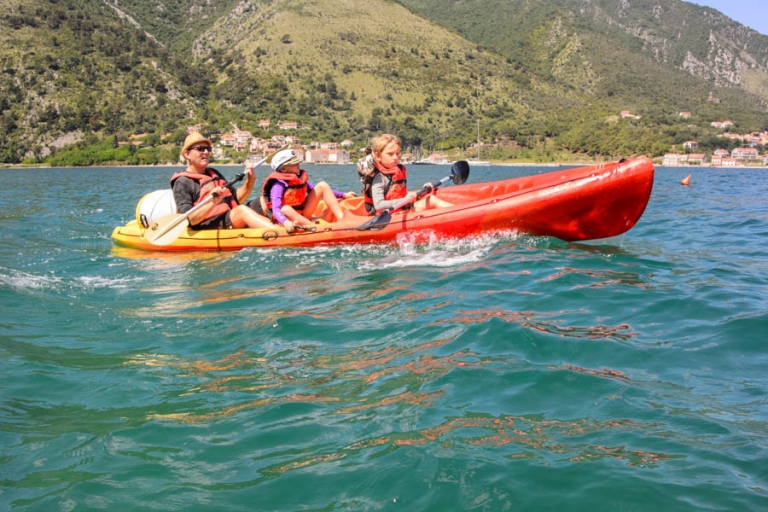 Videos of us canoeing the bay of Kotor

It was a little hard to hold the camera entirely still so expect a little wobbling from this video of us kayaking the bay of Kotor.

Top tips on how to canoe the bay of Kotor

What else could you do in Montenegro